FLICKING through the pages of Street Machine, you’ll find proof aplenty that great cars come from good plans, without which heartache and dissatisfaction invariably arise. Well, XYGT-93 is one streeter that well and truly bucks that accepted wisdom.

9
Despite a few GT cues such as the interior, tail-lights, boot mould and the GT-inspired side stripes (which are painted on), this Falcon is no GT clone - Jamie didn't want a genuine GT, as he wanted to drive it

“I didn’t really know what I wanted, and things got out of control,” says Jamie Hale, the owner of this breathtaking XY Falcon. “I blame my business partner Craig Harris – he’s a very bad influence.”

Jamie bought the car sight-unseen out of Perth, and decided the paintwork on his new acquisition needed redoing. Into a local Bendigo panel shop it went, and here’s where the aforementioned incorrigible business partner enters the picture.

9
Jamie's known for being pretty hard on his machinery, which is why his mates call him Hale Damage – hence the name of the custom PPG paint hue: Hale Damage Blue

“Craig owns a really nice A9X and is far more knowledgeable about cars than me,” Jamie says. “I was off to the States and told the shop: ‘Just do whatever Craig reckons.’ I got back and the car was completely stripped and on a rotisserie!” Hmmm, looks like that quick make-over had escalated into a full-on rebuild. Craig’s instructions were: ‘Make it awesome.’ Everything was being smoothed, every hole filled and the underside fully detailed.

“I couldn’t fight it,” Jamie says. “We all got a little excited and got caught up. But I’m extremely happy; it’s a sweet thing to drive.” According to Jamie the original car wasn’t too bad. It had a 500hp 393 stroker, Top Loader and a braced nine-inch complete with spool and traction bars. Inside was an all-new, GT-spec interior and rollcage. Jamie’s pretty confident the Falcon had seen its fair share of quarter-mile action. “I tell you what though, if I’d known how far we’d end up taking things, I would have started with a shell,” he says. “I paid good dollars for the car and all we ended up using was the diff housing and the interior – everything else is new.”

9
For a ride that was never meant to be a show car, it’s pretty nice under here. Note the larger gearbox and engine sumps. Their increased capacity helps keep oil temps under control

Part of this renewal process, carried out by Chris Frankling of Bendigo Automotive Restorations, was the smoothed engine bay. This included shaving the factory firewall lip, smoothing over the original battery recess before welding up and plating over every factory seam. The brake booster was deemed to be an eyesore, with the Wilwood master cylinder now working in tandem with a boot-mounted VH44 remote booster. Rounding out the brake package are Wilwood calipers and 295mm discs at each corner. 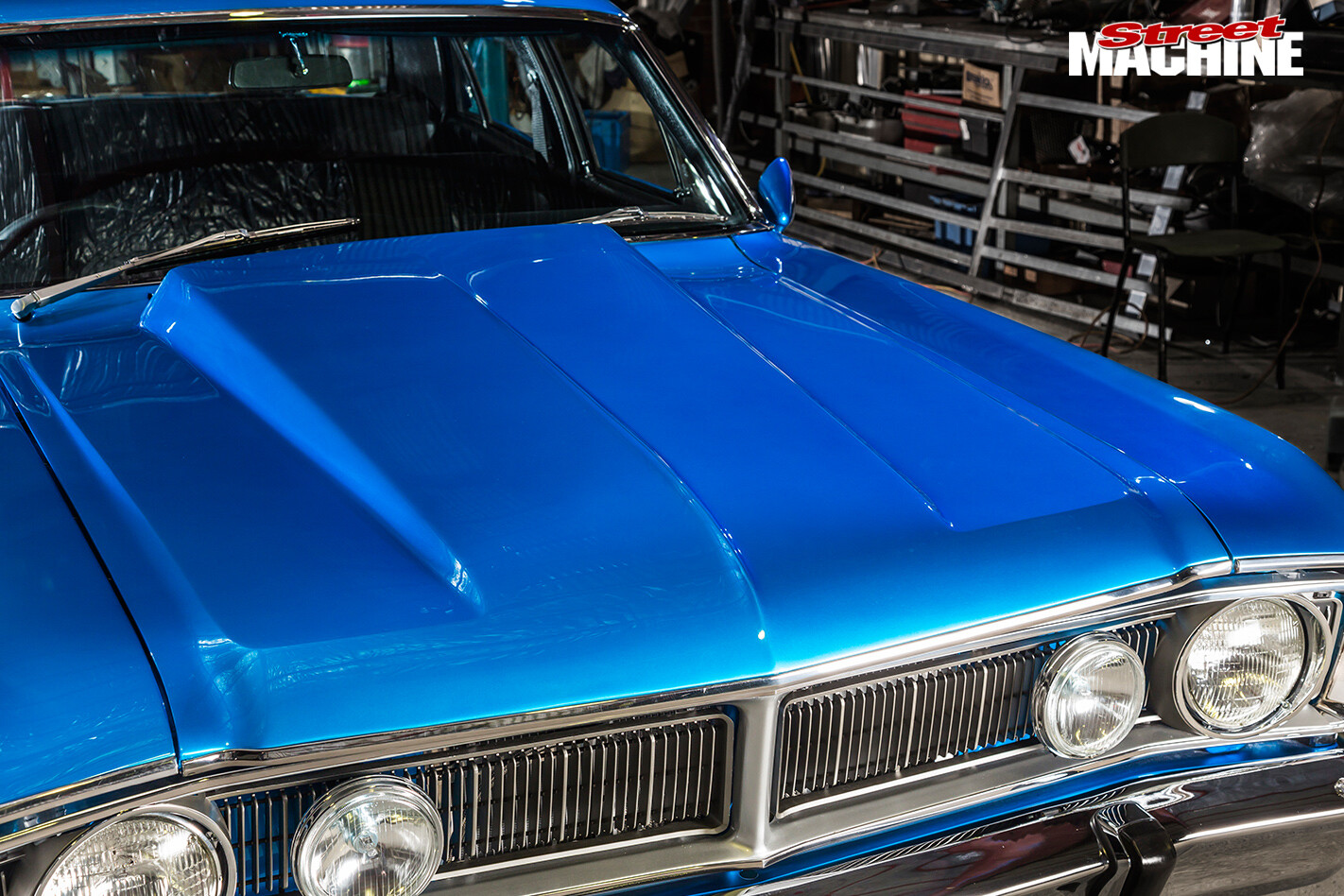 The reverse-cowl, twin-skin bonnet is another standout feature; a second XY bonnet skin was used to create the top of the scoop (to retain the factory centre seam), while the inner frame was reconstructed and boxed in, to create a slick, smooth-flowing underside.

To get maximum rubber under the rear with no rubbing issues, the rear wheelwells were squared off. Chris explains that it’s not mini-tubbed as such, rather the rounded sections are now squarer. The 265/35R19 Pirellis can travel waaay up into the never-never and not rub. “The top of the wheel tub pretty much sits up hard against the quarter,” Chris says.

9
Getting a full three-inch system tucked up under the lowered Falcon was no easy task. Exacerbating the situation was having to polish it after it being fully welded! The traction bars help plant the rear tyres

During the initial stages of the build, Bendigo Automotive Restorations was a side business for Chris. However not long into the project he quit his job to go full-time on XYGT-93 – which was completed in just 12 short months! It’s also turned out to be a bloody good advertisement for his newly launched enterprise.

9
Helping the beautifully detailed 393 Clevo make well over 600 horses is the seriously tall TFC inlet manifold. Even with the reverse-cowl scoop, the shorty air cleaner only just clears the bonnet

“Jamie didn’t really know when to stop and I wasn’t about to interrupt him,” Chris laughs. “I was very lucky, Jamie just kept adding and adding.” 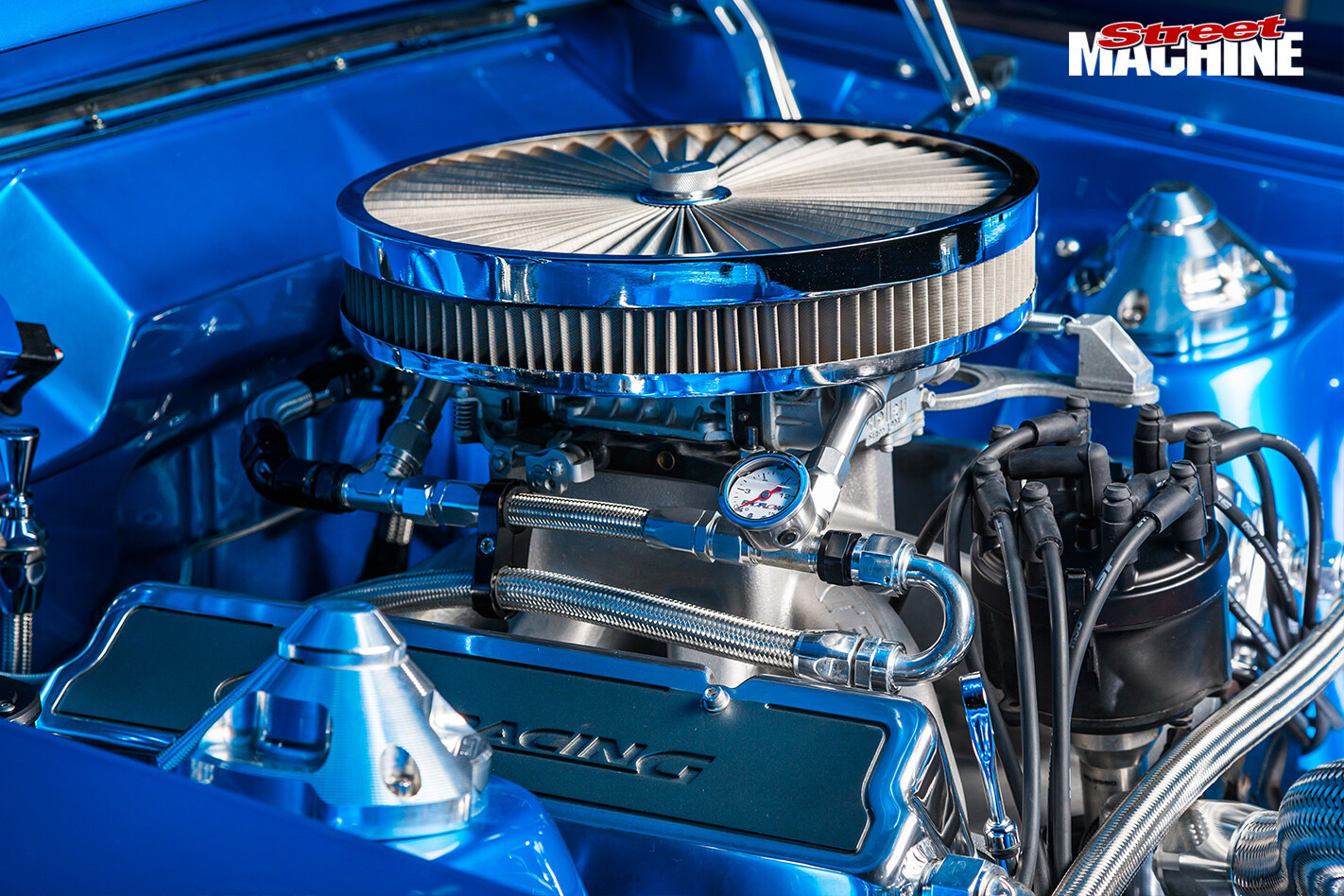 With the bodywork in full swing, Jamie’s attention turned to the driveline. He wanted the cruiseability of an auto, so the Top Loader was yanked in favour of a C10 by ATS Automatics. Jamie’s mates have nicknamed him Hale Damage due to his long history of being pretty hard on his cars, and with this in mind, the ATS guys filled the C10 with all the best bits they could lay their hands on. The original nine-inch was also gutted, with the braced housing now filled with all-new gear including a 31-spline Eaton Truetrac LSD and 3.9 gears. In keeping with the ‘now that we’ve gone this far, we might as well’ mindset, the 393 was shipped off to Advanced Engine Dynamics for extra ‘enhancement’. They stripped the FoMoCo block and rebuilt it from the ground up – complete with a pair of deep-breathing 4V cast-iron heads. Jamie was eager to see what the new combo was good for, but unfortunately his huge two-inch primary Pacemaker extractors didn’t fit on the dyno – it had to be dynoed wearing a set of restrictive factory headers. Despite being hopelessly strangled, the 393 still managed to pump out a very respectable 605 horses.

9
Hiding the Proflow oil-breather catch can in behind the inner guard (where the battery originally resided) was Chris’s idea, and is a very neat feature

Later on, fitting those big, Jet-Hot-coated pipes up into the Falcon’s freshly painted engine bay proved to be quite a nightmare. “It was terrible,” Jamie says. “There was no room, it was so stressful!”

One of the few original parts to survive the rebuild was the GT-style factory interior, as it was mostly new and in great condition.

9
Custom work in the interior extends to the modified console, SAAS wheel (which was very last-minute) and the hidden stereo. A false factory fascia detaches to reveal a CD/tuner operated via remote control

“Honestly, it was also going to be replaced,” Jamie says. “The plan was to retrim the interior in the same style that A&H Trim finished off the boot. We ran out time before MotorEx and put the GT trim back in. I love it now and people seem to appreciate it, so I’ve decided to leave it. I also like the fact the boot doesn’t match, as people get a surprise when I open it – they’re not expecting that.” 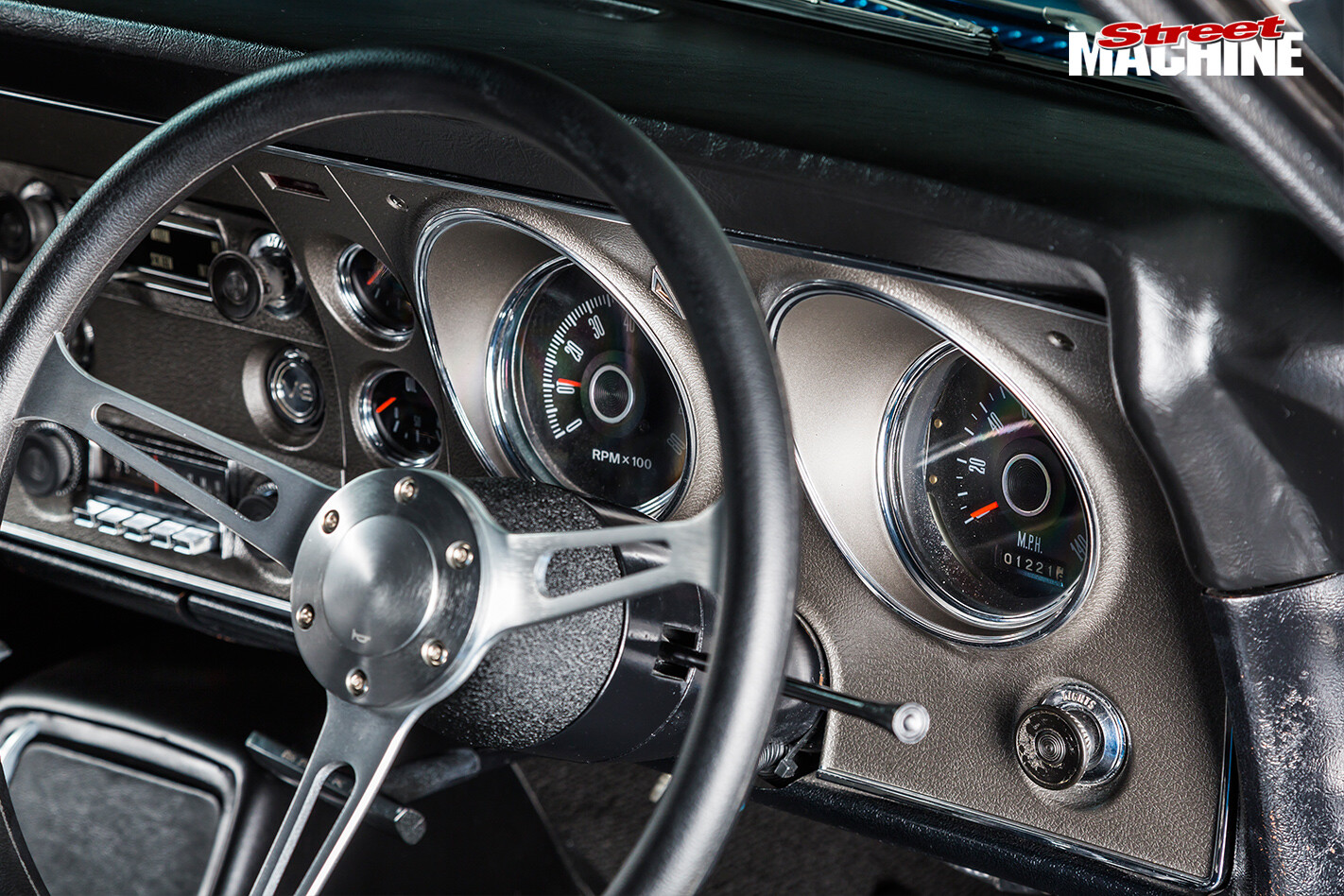 On the subject of XYGT-93 taking out the MotorEx 2016 Best Modified Muscle award – the car’s first show – Jamie has this to say: “I love my old cars and I love driving them, but I’m not the best mechanical-wise. I hardly turned a spanner on the car; Chris fully busted his ringer on it. However I’m taking full credit for the MotorEx win, because I polished the bloody thing before it went on show!” 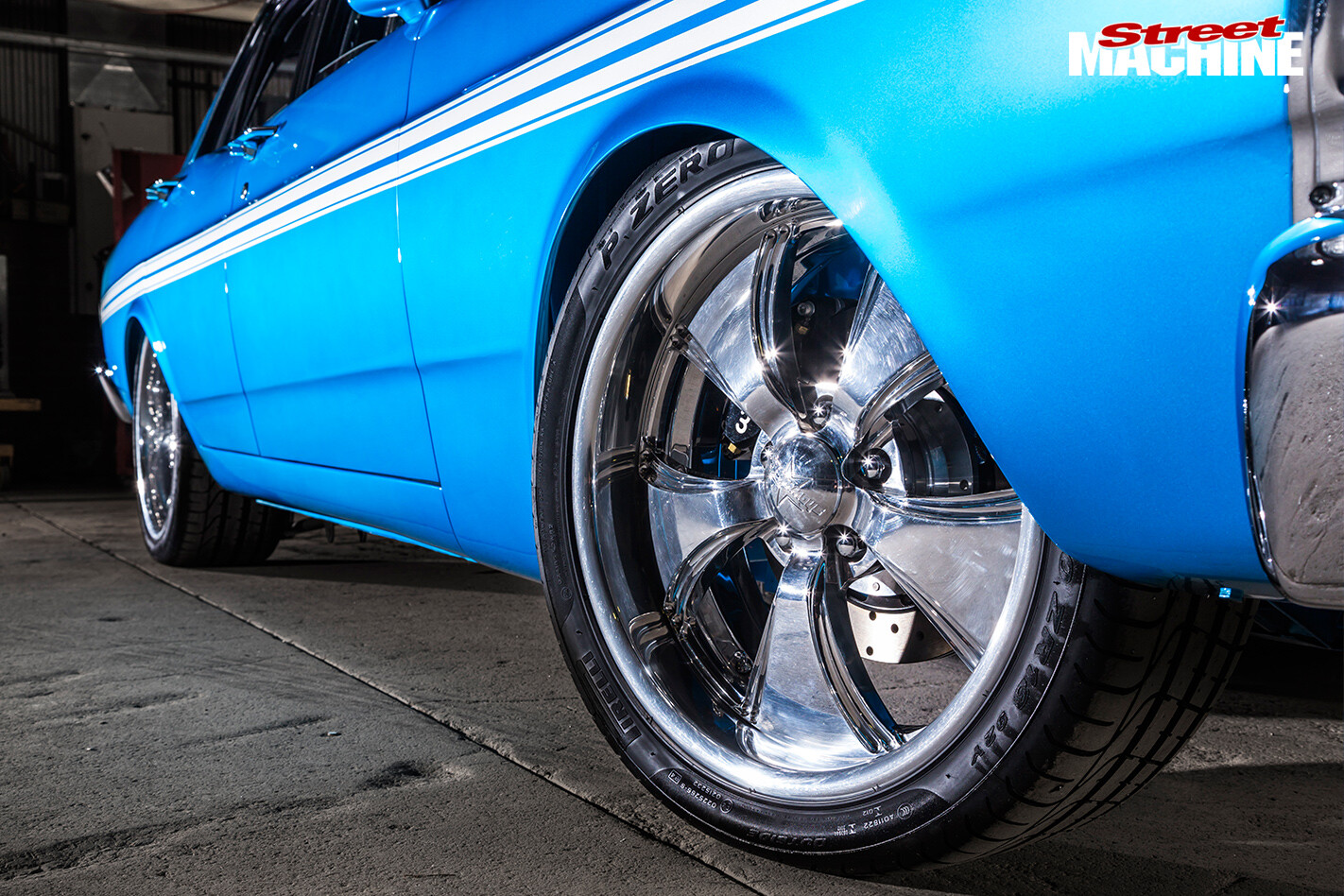 Having a build blow out in such a massive way often leaves street machiners gun-shy about pulling the trigger a second time ’round. Not Jamie – he’s already got another two builds in the works. There’s an XY ute currently in the shop, with a windowless XY panel van to follow. Yep, the street machine bug has bitten him real good. Hope they both turn out as nice as XYGT-93.