SOME clever buggers have the foresight to hang on to their first car, but many of us aren’t so lucky, and are therefore prone to pangs of nostalgia – if not straight-up regret – every time we walk past a similar model. For Tim Martenstyn, those feelings were too much to ignore, so he built a replica of his first ride, but with with a far spicier recipe.

“When I was 17, my very first car was a white HG wagon with a red interior,” says Tim. “I paid $30 for it back then. I’ve got an HK Monaro and a Torana, all sorts of stuff, but I wanted to have a replica of the first car I ever owned.

“I hunted around for a while and found this car up in Shepparton. It’s an original Kashmir White and Baroque Red trim car, and it came with a brand new interior, so I thought it was a good starting point. I freshened up the whole car’s paint and did a new drivetrain so it could be a good old-school cruiser.” 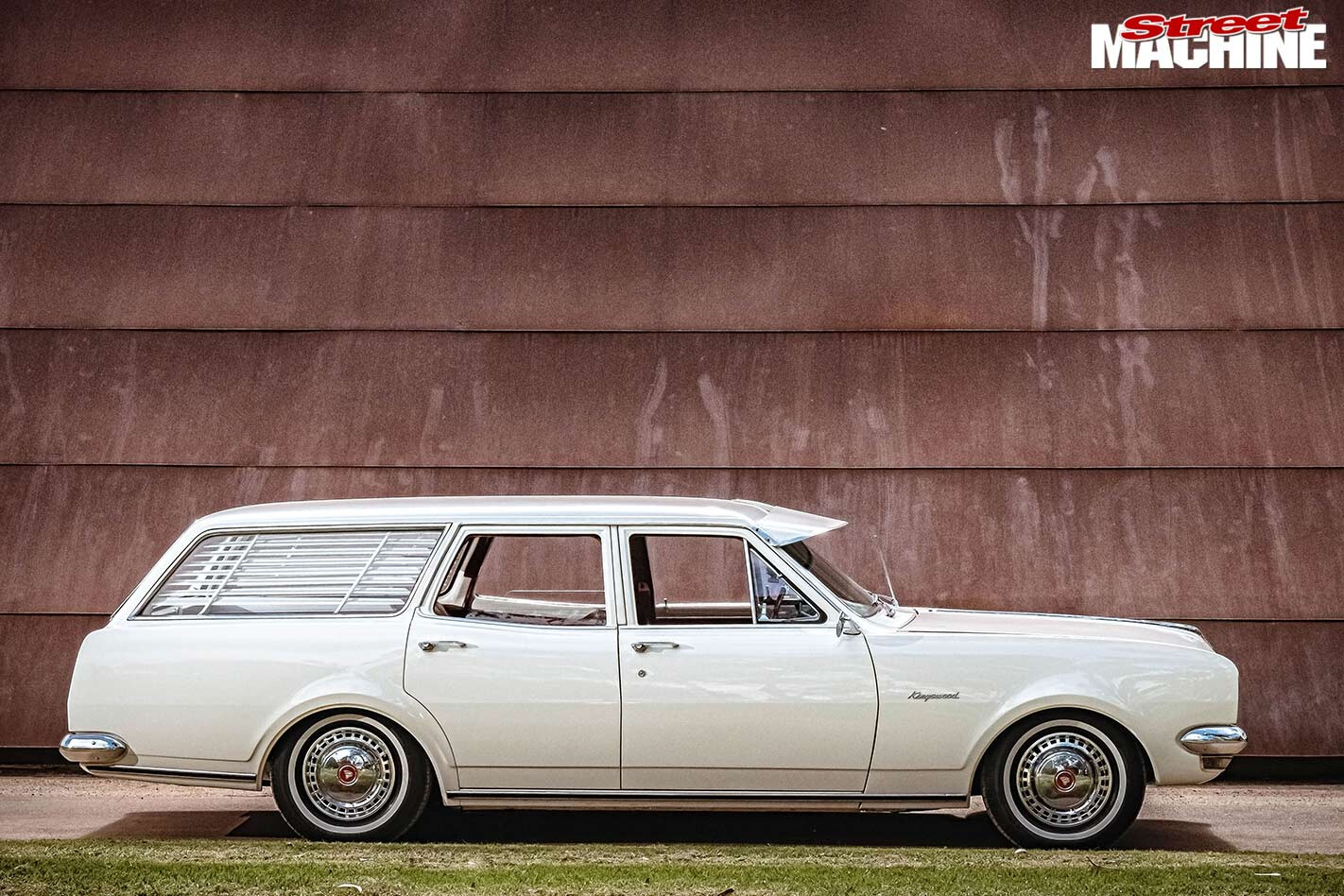 While he calls it a ‘cruiser’, Tim’s wagon is not short on herbs thanks to a tough 435rwhp small-block Chev under the bonnet, based on a late-model Vortec SBC. Tim had Nino at Riverside Motors in Werribee pull the iron Heartbeat of America down and fit a Comp hydraulic-roller cam and upgraded lifters, while the BluePrint 23-degree aluminium heads were decked to push compression up to 11:1. He also added ICE ignition, four-into-one extractors and a Holley carb and Air-Gap manifold. 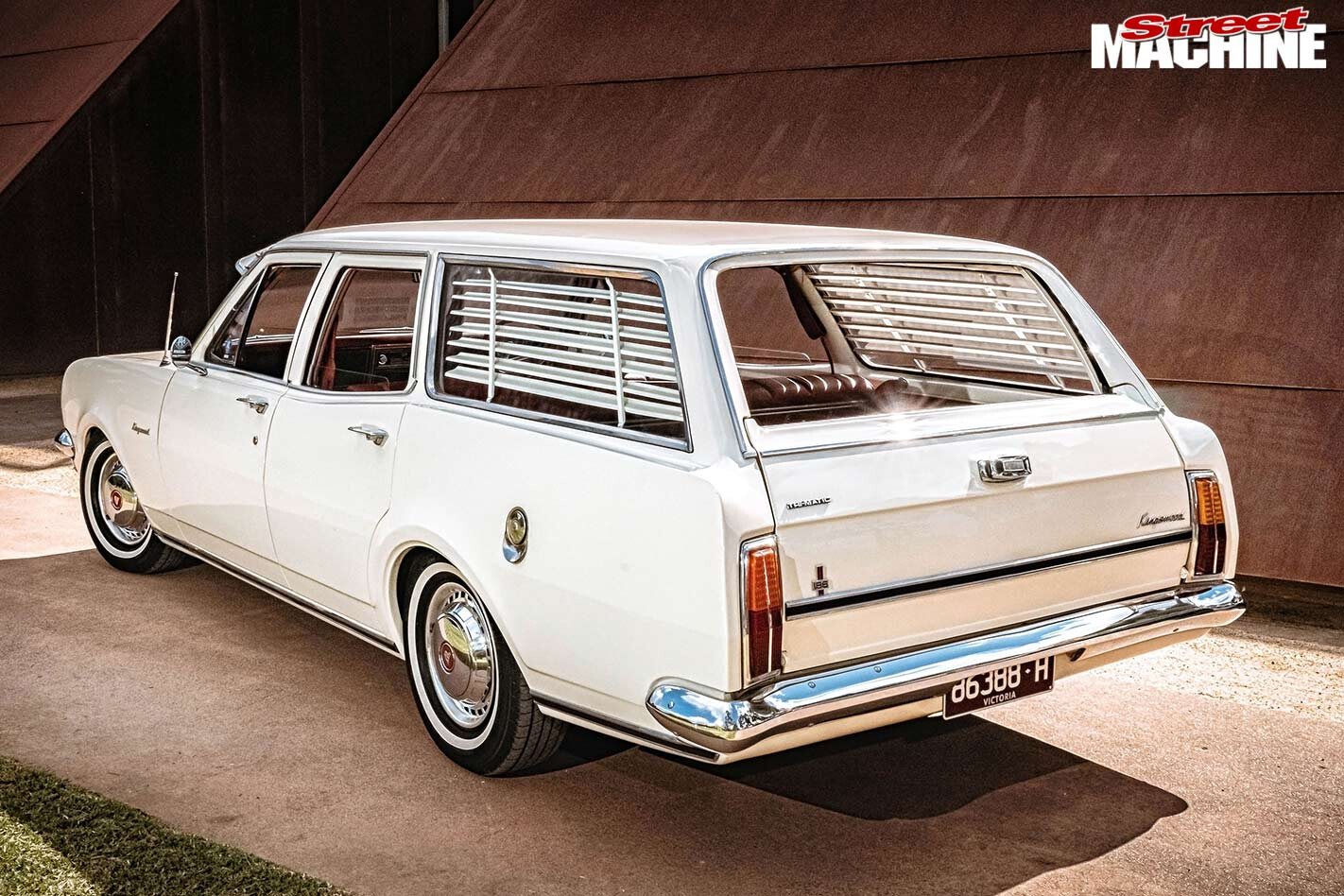 “If I can get the wheels and tyres on, I might take it down the strip,” says Tim. “I’ve been told it could maybe do a high 11, but I didn’t build it for that. I just love getting it out with my car club and mates and going for a drive”

“I bought it as a complete engine, then pulled it down and had it built so it has a good sound and goes well,” explains Tim. “I also got a 3700rpm converter and TH350 auto that has a stage-two shift kit in it, and had a Ford nine-inch diff fitted with 28-spline axles and 3.5:1 gears built by Hans in Melton. It goes really well together; it is a great package.

“I also upgraded to HG V8 discs and sway-bar up front, with stock drums out back. The front has 55mm-lowered springs with reset leaf springs in the rear, all taken care of by Rob at The Suspension Centre, to get it sitting nicely on the original 14x6in steel wheels.”

Keeping the original flavour of the first-generation Kingswood was really important to Tim, and he went to great lengths to keep the interior as unassuming as possible.

“I had to retain the column shifter for a retro look,” he laughs. “I’ve just got a couple of warning gauges, plus a shift light, because I tried to keep it as discreet as possible. People always tell me they had one just like it, and I just let them tell me all about their original car; they don’t pick it.

“Because the car was so original when I found it, I wanted to keep it that way. I’m building a wild HK Monaro with airbags and blown LS, so I wanted one car that kept that old-school flavour.”

A three-core V8 Kingswood radiator was used to keep a lid on the small-block’s temperature, while a Holley mechanical fuel pump got the nod as Tim wanted it to look all original when the bonnet gets popped. He hooked it up to larger half-inch fuel lines to supply the pump gas

Experienced horsepower junkies who might be thinking the six-inch-wide tyres on the back of Tim’s HG are not long for the world are not far off, as the man himself admits. “She boogies,” he laughs. “All it does is fry tyres, so I’ve purchased a pair of 15s made in the HG stud pattern so I can get a 235 or 255 tyre under there and try to put the power down.

“This is my weekend cruiser, and it’s a perfect sleeper. On a Friday night or Sunday afternoon we’ll take it out for a drive and it cruises very nicely. When people hear it bark, their first question is: ‘What’s in that thing?’”

THANKS
My partner Carla and my children Braydon and Alicia, and her boyfriend James, for their help and patience during the build