THERE will be those who take one look at Shannon Jennings’s bright green, big block-powered HQ Monaro, eye off the massive rear rubber and immediately dismiss the idea that anyone could – or should – drive such a creation on public roads. These are the kind of people your grandad would have called a wowser – the type who frowns upon other people’s enjoyment of life, and assumes that if something is different, it is bad. To them we say: Screw you! Not everyone can own a tubbed, 498-cube two-door HQ, but thank heavens someone does, because every time we see Shannon’s ride at a cruise or on the track, it gives us a smile a mile wide. 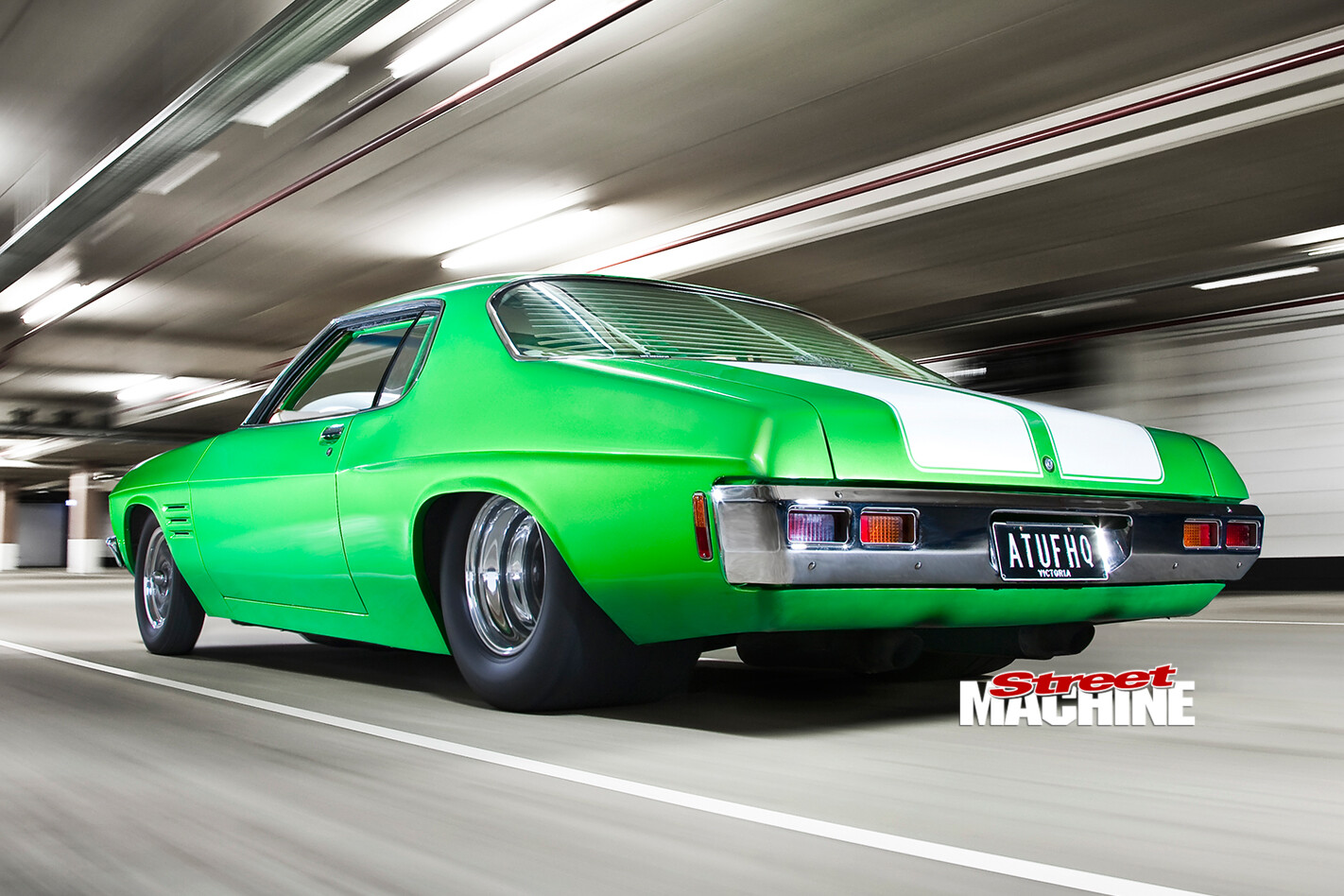 Shannon – or Pyro to his mates – has had the HQ on the road for over a decade. When we first encountered it, at the Shepparton Springnats, it was black with a violet pearl overlay, blown and wore a set of subtle harlequin flames. It was tough, tidy and the latest in a long line of Monaros that have gone through Shannon’s hands. 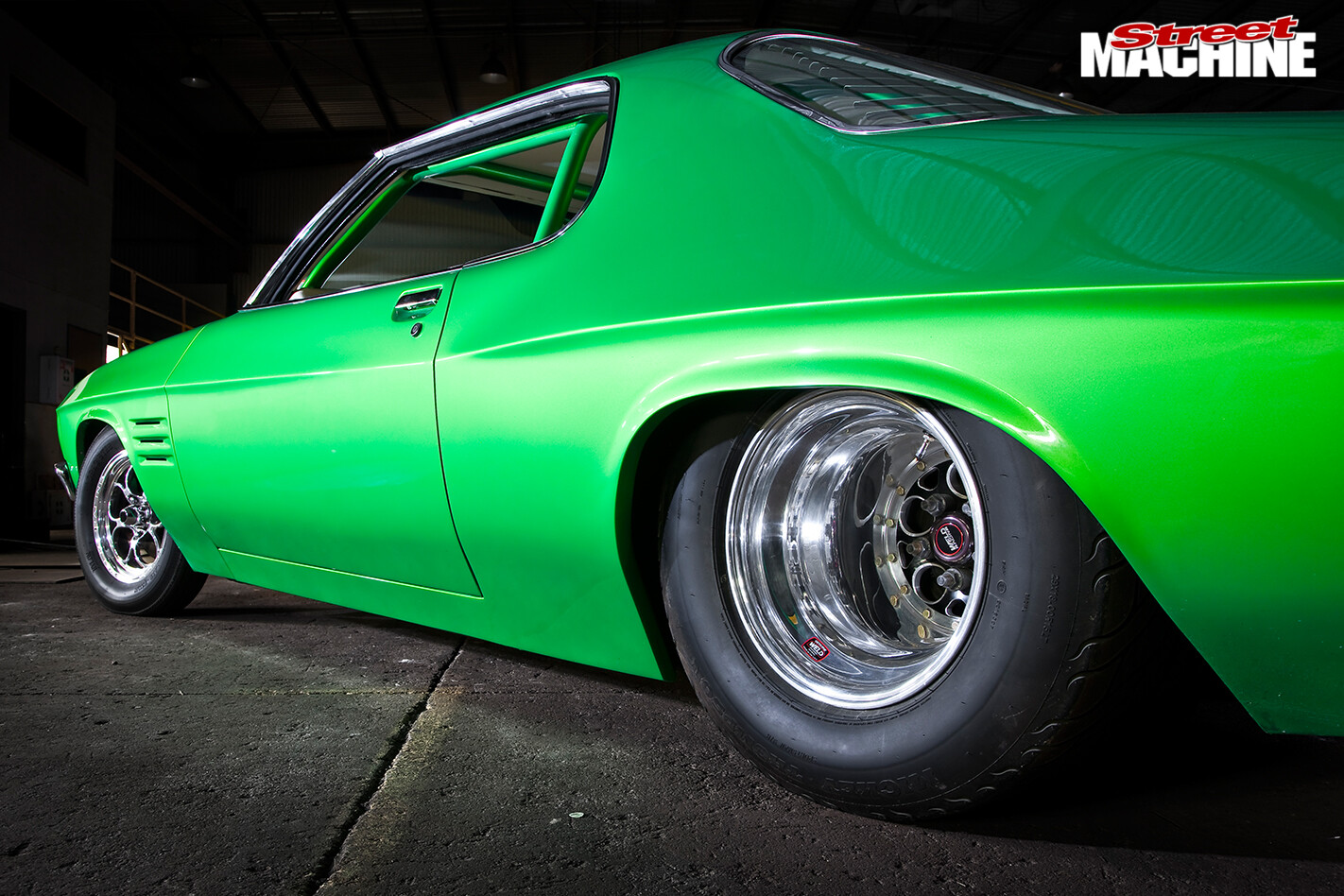 “Monaros are in my blood,” the 38-year-old custom paint guru says. “My dad bought a 327 HK GTS new. Straight away, he pulled the stock wheels and GTS hubcaps off it and fitted a set of mags. He had it six months before my older sister was born, then he sold it. We’ve still got those original wheels and caps.”

6
Shannon has plenty of toughies in his resume, with his very first car being the Wild Plumb HT pictured above. He's mucked around with a couple of old-school turbo V8 set-ups too

True to form, Shannon’s first car, at age 17, was a Wild Plumb HT Monaro. He also wanted to follow in his dad’s footsteps and get into the carpentry trade. “Then Dad got crook for a while and stopped working. I was always mucking around with cars and bikes for me and my mates, so I decided to do an apprenticeship as a spray painter. When I was 21 I decided to give it a go and open my own shop. I just had a compressor and some guns and my dad and I built a booth, which turned out to be pretty terrible, so we pulled it down and I just sprayed out in the open for a while. I just built it up slowly from there and went into the custom paint side of things. I do airbrushing, pinstriping, gold-leaf lettering – as well as a lot of custom paint for Harleys.” 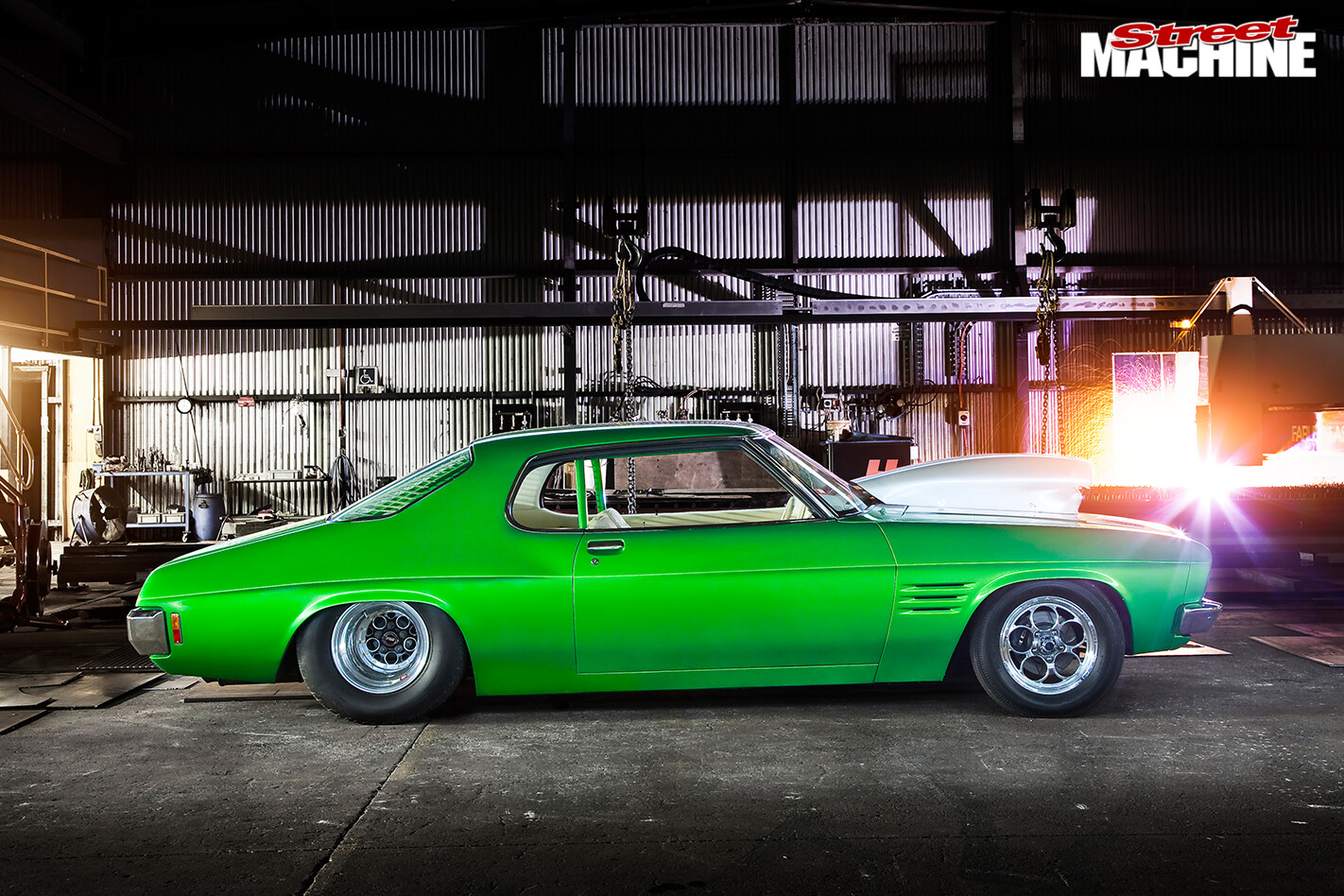 All the while, Shannon was buying and selling cars to raise extra cash, including plenty of Monaros. “Back then, they were cheap! We’d buy dungers for certain parts, then wreck them.”

He went through a bunch of neat street cars and some tough ones too, including an HJ ute that was fitted with a single-turbo 308, and also an HQ Monaro with a single-turbo SBC. “Some local guy put the kit together. It went through a few sets of hands, then I got it and ran low 11s at Calder. Then I sold the turbo set-up, put a blower on it and blew the engine,” Shannon laughs.

That didn’t put him off supercharging though; when he bought his current HQ – already tubbed, wearing an HZ Premier front end and fitted with a ’cage – a blower was always on the agenda. Shannon redid the four-link, modifying it so he could run a back seat, and tied in the rollcage to the chassis to make it as stiff as possible. Then he painted it and laid out the cash for a blown small-block from Pavtek in Melbourne. “It wasn’t cheap,” says Shannon, “but it was a great motor; a really nice combination, making 650hp.” He had a bunch of fun with the car, skidding it at Springnats and Easternats, as well as taking it up to Summernats just to cruise.

Then Shannon got the urge for both big-block grunt and a colour change. The blown small-block was sold off and he bought a 468-cuber that Shepparton’s Sandy ‘Doggie’ Graham had built. 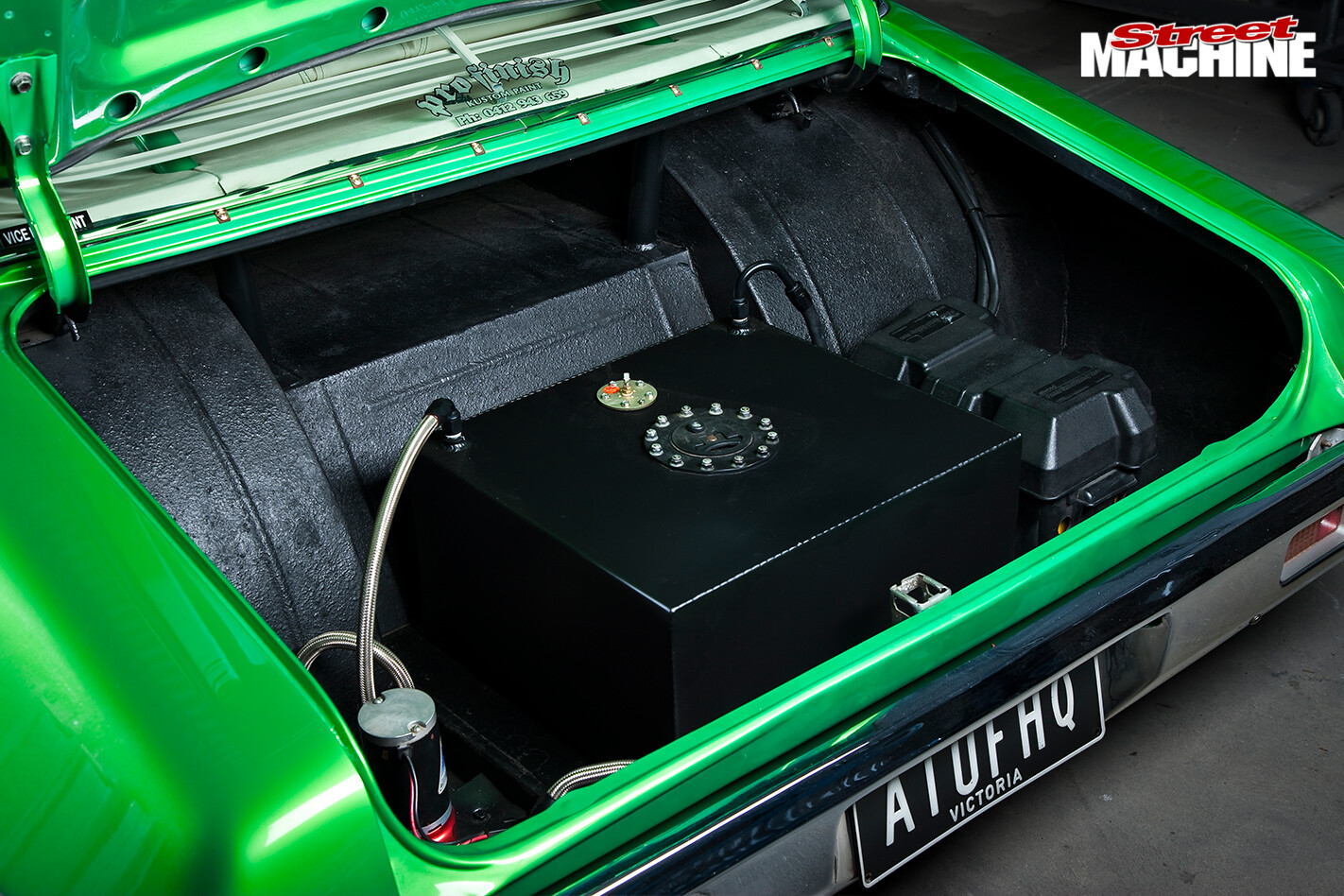 “Even though I’m from Geelong, I’ve made quite a few mates up in Shepparton from the early Springnats days,” Shannon says. “I’ve painted quite a few Shepp cars, including Shaun Horton’s FB and Harry Haig’s XR (both Street Machine cover cars, March ’08 and Feb ’13 respectively). I got invited to one of Doggie’s shed parties in The Compound. None of my mates wanted to go, so I went on my own and loved it!”

6
The 498ci rat motor has been built to be big on fun, low on maintenance. It runs sweet on pump fuel, with a set of Gonzo's 4-into-1 extractors with 2½-inch primaries. Shannon reckons it's good for around 700hp

The first motor was a toughie, running on avgas with 13.4:1 compression. It was a weapon, but not much fun for cruising. “The avgas thing was a pain,” Shannon says. “It would get hot, foul plugs and used heaps of fuel. So I asked Doggie to put together a more street-friendly pump-fuel combination.”

6
Acres of faux snakeskin contrasts nicely with the bright green duco. The front seats are GTS buckets, but with the headrests removed.

Complementing the big-block is that bright, blinking green duco – House of Kolor Lime Time Pearl with Snow White stripes, to be precise. Body mods are few, with just the side mirrors and most of the badgework deleted. The tall inlet manifold meant that cutting the bonnet was going to be a necessity. “I made up a bonnet with a reverse-cowl scoop, but everyone has them and I like to be a bit different, so I went for the Hornet scoop.” 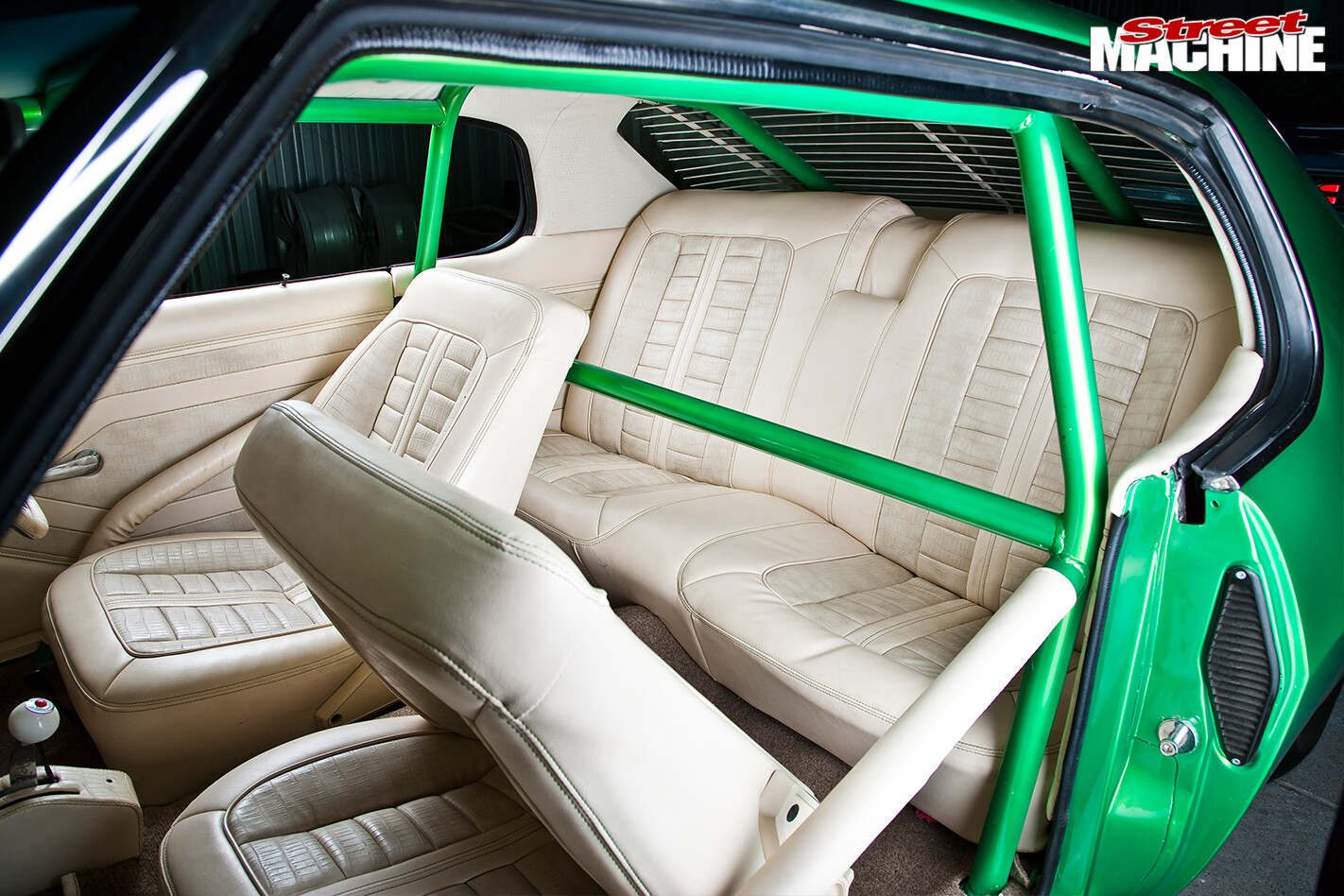 The real key to the car though is the stance, due in large part to the way the 15x15 Weld Magnums with fat M/T SR rubber sit in the rear guards. There’s ample sidewall, heaps of width and plenty of dish – which is emphasised by the black centres. Shannon is always restless though and admits he’d like to treat the HQ to another coat of paint at some stage. Before that though, he’s eager to give his ’51 Buick a makeover. Already a super-cool car with its chopped top and slammed stance, the plan is to treat it to a full candy makeover, with slick trim and new running gear. Watch this space!