SOME people are predestined to buy a certain car. Victorian Mopar fan Mick Lulic is one of those people.

“I grew up being ferried around in my parents’ V8 Charger,” Mick says. “It did all the daily chores – school runs, holidays, shopping, you name it – so when the time came to get my licence, buying my own Charger was a no-brainer.” 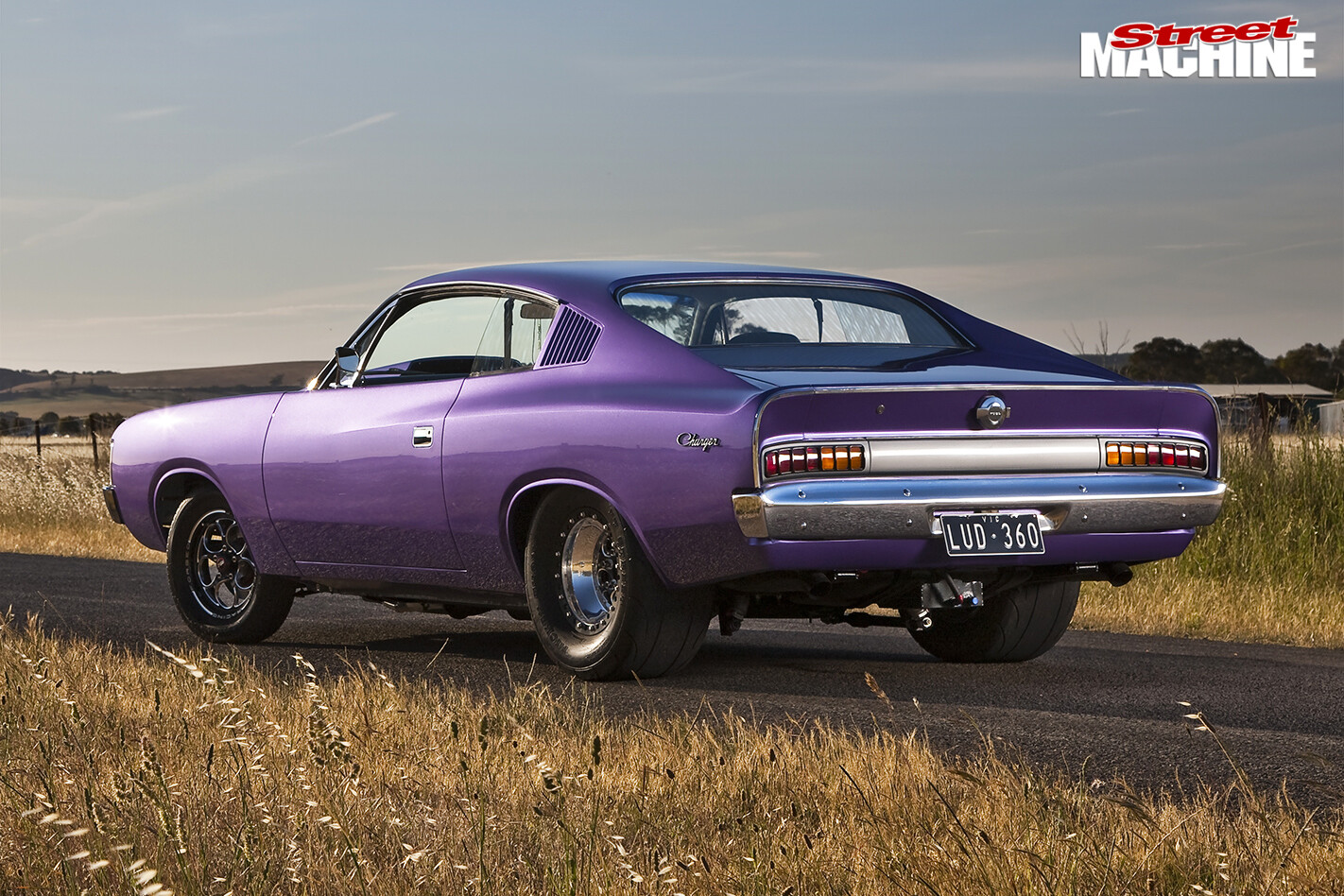 It might be hard for younger readers to imagine streets full of daily-driven old-school machines, but that was how it was in the 80s and early 90s, with plenty of worthy candidates up for grabs.

“I settled on this VH Charger,” Mick continues. “It was a Vitamin C-coloured R/T mock-up with a heavy-breathing Hemi.” The 400hp 265 was a healthy six even by today’s standards, but an avgas-only diet and some niggling rust issues started to wear Mick down. “We dropped in a tough 360 to improve its streetability, but after 15 years the body was starting to look a little sad. I’d patched it up here and there to keep it presentable, but the time came when it just wasn’t good enough. “I met a bloke called Dave Blackham who loves Chryslers and knows his way around their body and paint. I was originally going to stick to Vitamin C to keep the costs down, but Dave rang me saying: ‘I’ve just bare-metalled your whole car so you might want to change the colour!’”

Dave knew that, deep down, Mick wanted purple, and his dedication to the project really took the Charger to the next level. “He finished the car far beyond my expectations and we’ve since become close friends,” Mick says.

Dave eliminated any standard Chrysler rust and whipped up the steel reverse-cowl bonnet, before bathing the stumpy coupe in fresh coats of factory Plum Crazy metallic. The stock brightware and driving-lamp grille were restored, and along with the colour, they firmly stamp the VH with 70s spunk.

5
Mick's Charger was originally specced with a 215 and three-on-the-tree, sporting a tough 265 running triple 50mm Webers backed by a five-speed and then a Powerglide before moving to a V8

Engine-wise, Mick didn’t have to look far to find a trusted builder. He called on good mate and Chrysler guru Theo Diamond to piece together a stout small-block. “Theo has always built my engines. He helped push the old 265 to 12.50s nearly 20 years ago and knows Mopar donks inside and out.”

The Diamond-built 360 mentioned earlier had been fitted to the car back in 2000, and later upgraded to a 408 stroker. But with the car stripped bare for panel and paint, the boys decided to freshen-up the small-block and treat it to a few refinements.

Theo retained the factory 360 block and Eagle forged stroker crank, adding Scat H-beam rods and forged pistons to round out the bottom end.

A custom-grind Wade .590-lift cam and Crow pushrods are all business, while Comp springs and Manley valves bear the brunt of the exploding charge. The Edelbrock Performer aluminium heads have been heavily massaged and fitted with offset rockers. They’re divided by a Super Victor intake, and a Pro Systems 1000cfm carb sits pretty to draw the most from that beautifully crafted reverse-cowl scoop.

An MSD distributor and 6AL module keep a fire in the belly, while cooling duties are handled by a Meziere electric water pump, hefty aluminium radiator and twin thermo fans.

“Theo has never let me down. I asked for a motor that was pump-friendly and well-behaved on the street, but turned into a monster when you mash the pedal – and that is exactly what I got!” Mick laughs. “A 10.60@125mph is its current best, but it will happily soak up a 150km round trip to Melbourne with ease. It truly is the best of both worlds.” 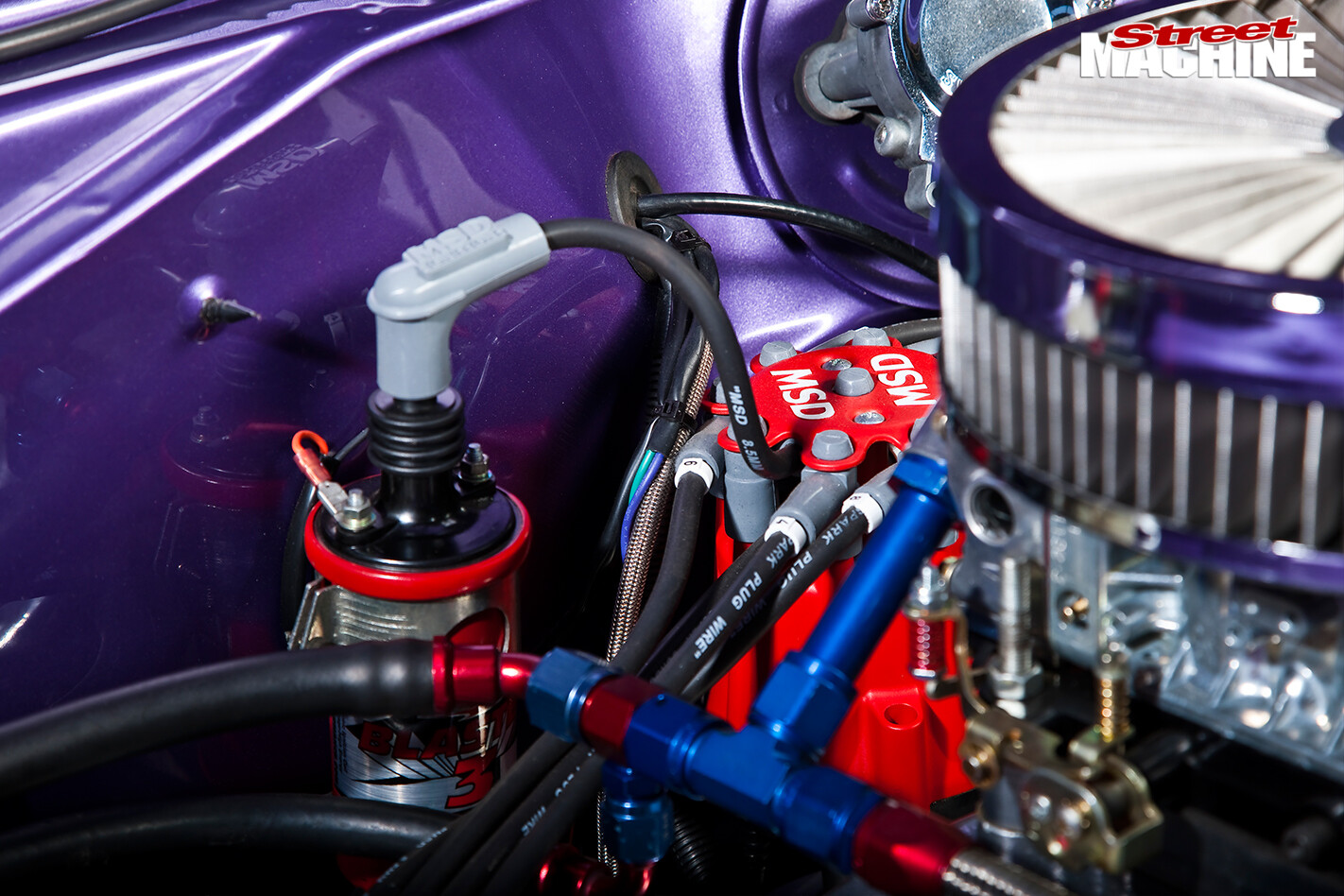 The obligatory 727 transmission was pieced together by John Sinosich, who added a reverse-pattern full-manual valvebody and locally sourced Dominator 5000rpm stall. A heavy-duty tailshaft sends power rearwards to an XY nine-inch, packed with a full spool, 4.33 gears and 31-spline billet Moser axles.

A neat tub job is the handiwork of another of Mick’s car mates, Nick Dumic, who casually forced Mick’s hand. “I asked Nick if I could store the Charger in his garage while my own shed was being built,” Mick remembers. “He was more than happy to oblige on the condition that he tubbed the car while it was there!” Nick’s work is neat as a pin, and the level of finish and detailing continues the ‘factory’ theme found throughout. XF Falcon calipers have been adapted to VH front discs, while Ford rear drums were retained as part of the old-school nine-inch conversion. A 16:1-ratio R/T Charger steering box is a rare bit of kit these days and is topped by an ever-cool three-spoke Chrysler sports twirler.

Step inside and you’re greeted by an original R/T interior, resplendent in black vinyl, a holdover from the car’s replica days. A factory sports dash looks the business, but with the original gauges about as accurate as a game of blind darts, a selection of Auto Meter versions have been added for peace of mind.

5
'72 bucket seats, sports wheel and tacho dash hark back to the Charger's early years as an R/T replica

Gary Harrison took care of the electrical work and final assembly, and since the completion of this latest build Mick has racked up 12 months of hassle-free driving.

After 20 years together, Mick and the Charger have finally reached the pinnacle of their relationship, and he’s happy to label the car ‘finished’. “This is my dream car and I’ll never part with it; it’s like a time capsule to my life,” he says. “I can’t stop tinkering though and I am in the throes of building a CL ute, which will run something turboed, or maybe an aspirated big-cuber.”

Either way, Mick will call on the same team to help make this new project a reality.

“My wife Sandra is totally supportive of my cars, and I’m surrounded by the best Chrysler guys in the business, who I can proudly call my mates. You breathe a lot easier knowing your car is with tradesmen who will treat it like their own.”