IT’S NOT hard to see the attraction of Pro Street racing. Watching street-style sedans, utes and wagons lifting tyres and skating down the quarter mile is like mainlining pure adrenaline. And just imagine what they’re like to drive! One look at Danny Busbridge’s twin-turbo LJ Torana will tell you he’s a fan, but instead of sitting on the sidelines he’s decided to step it up into the big time. 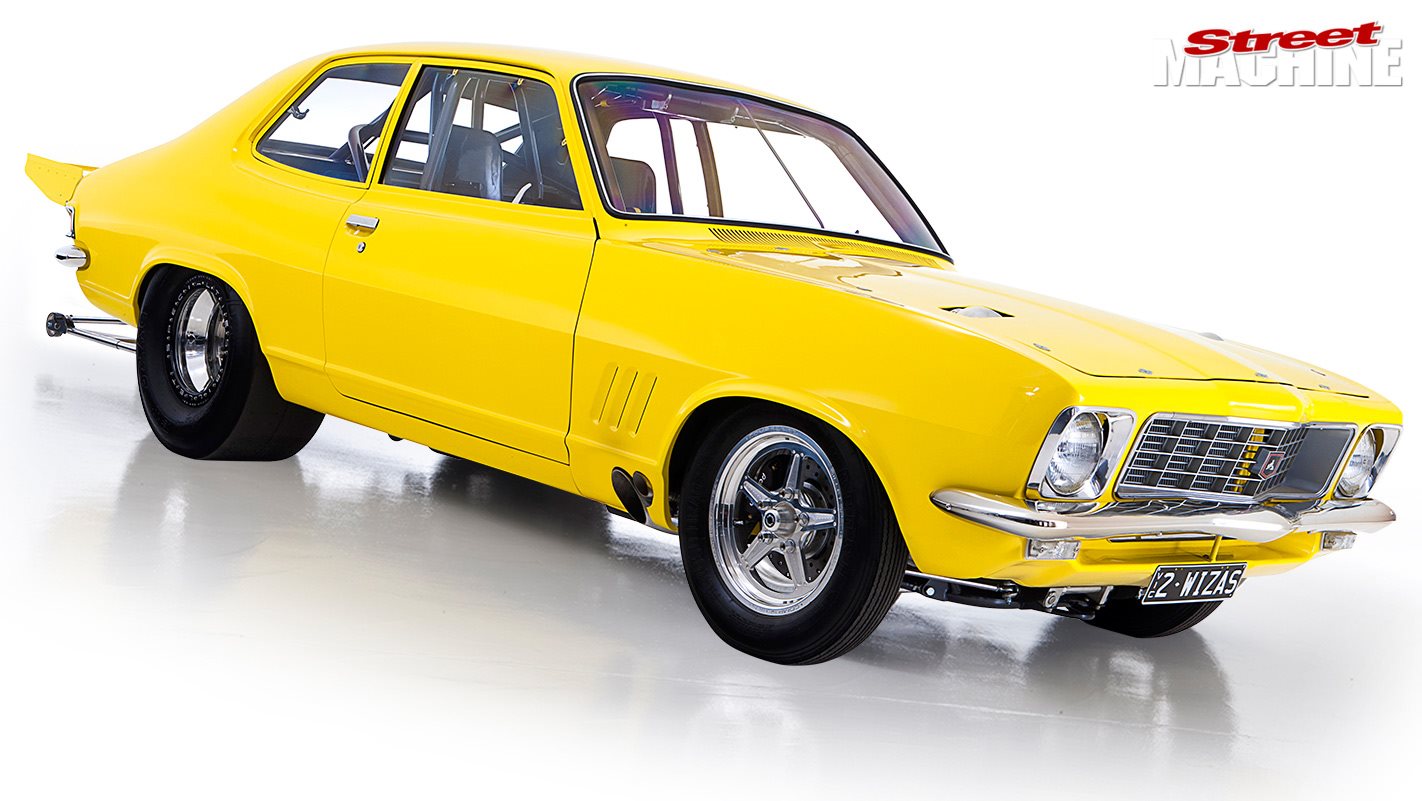 While it’s not exactly a street car, Danny hasn’t been afraid to hit the road with the twin-turbo terror. “I drove it down to the pub for Australia Day. It got a few looks,” he laughs

Now Danny’s no quarter-mile virgin. He’s got a similar-looking beast with a VN-headed 383 Holden that runs high nines sans chemical or mechanical enhancement.

“I was a big fan of the old COME1 Torana back in the day and built my streetcar the same colour,” Danny says.

Travelling around the country in company with Johnny Wilson and Simon Kryger gave him a real taste for something quicker, but he always seemed to be busy building cars for other people in his spare time. “Everyone was always asking when I was going to build one for myself,” Danny says.

So he set about planning a car that would be competitive.

“I’d go away with Johnny and Simon and see what they were doing. Running nitrous their cars were really aggressive out of the hole and sometime they’d just go up in wheelspin. So I figured I’d build a car that I could get down the track consistently. You don’t have to be the fastest guy out there, but you have to be consistent and try and be there at the end of the night.”

“They reckon when you go over 160mph you really need a wing,” Danny says. “I’m planning to go 200mph so I thought I’d do it now rather than later”

Danny started his quest by looking around for a good shell to kick things off with, and he wasn’t having much luck down near his home in southern Victoria.

“I was talking to Craig Burns from Streetcar Fabrications one day and mentioned I was after a good shell and he said one of the guys had one there.”

So Danny laid down some cash and put the car in the job queue. “I didn’t even go and look at it until the fabrication was well underway,” he says. “It was a two-year wait until Craig could get to it but we managed to get it bead-blasted and mini-tubbed while it was waiting.”

Once the Torana shell hit the front of the line, the guys at Streetcar Fabrication set about slicing and dicing.

“I wanted to do this once. Most of my mates have built their cars up over the years and had to rebuild and re-engineer them over and over. I’ve built this from the start with one goal in mind,” Danny says. 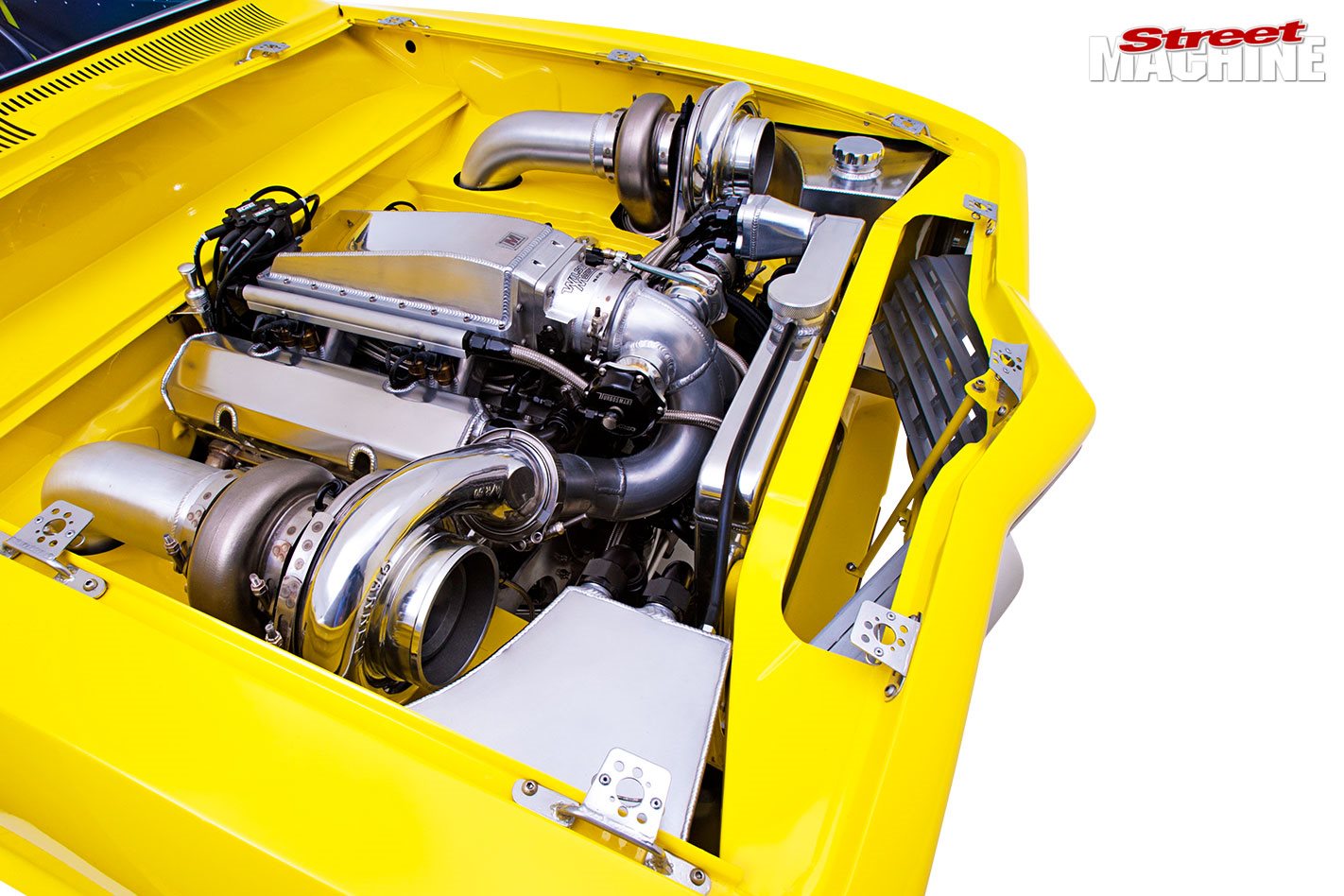 Twin Garrett GT4294s feed that 406-cube small-block. Streetcar Fabrication sorted all the pipework from the stainless headers to the alloy dump pipes. Danny reckons there’s an easy 1500hp under that fibreglass bonnet, and we’re not going to argue

With that in mind, Danny had a clear view on how he wanted things done. “A lot of the ideas were mine; Burnsy would be on the phone for hours and hours with me.”

They’ve raised and fabricated a new trans tunnel to allow for the lowered stance and a chrome-moly funny car-style cage ties the frame together. The rear guard openings were stretched by six inches for the 29½in-tall rear tyres but you could spend a day talking about all the modifications to the shell and barely scratch the surface. Under the rear sits a sheetmetal nine-inch with full floating hubs and 40-spline axles. The suspension arms front and rear have been fabricated and use Strange coilovers, discs and Wilwood calipers.

The plan from the start was to run methanol so they didn’t have to mess about with intercooling. “That’s the trouble with LJs,” Danny says, “There’s not a lot of room for an intercooler.”

Up front there’s a George Haddad-built 406ci small-block Chev. They started with a Dart Little-M block and tipped in a bucket load of high-dollar parts starting with a Callies crank, Oliver rods and CP pistons. The heads are a pair of CNC-ported AFR 235cc units with a beautiful Marcella sheetmetal intake finishing it off. 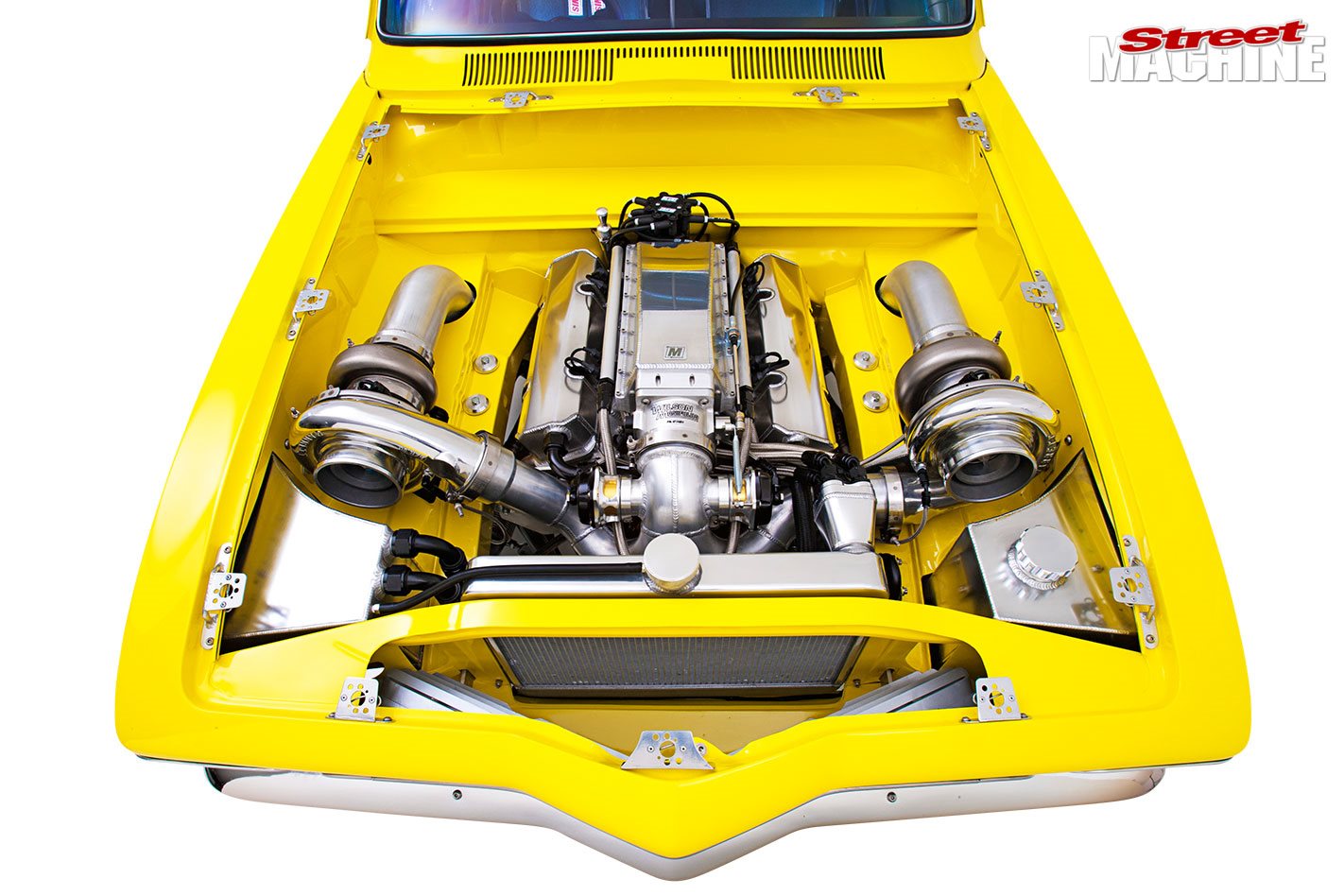 “You pull the manifold apart and it’s just as nice on the inside as it is the outside,” Danny reckons. “It was a 12-month wait, just for that intake.”

On the dyno with no turbos and a carby intake the engine was good for just over 600 horses according to Danny, but feed in the boost and the sky is the limit.

On the EFI side of things Danny’s bucking the trend. While the Big Stuff III system is all the rage, he’s gone for an Autronic SM4 with Moran injectors to pour in torrents of methanol. There’s a cam-driven Aeromotive mechanical pump up front drawing fuel from the large header tank built into the passenger side front guard, and an electric Aeromotive pump feeding fuel from the rear.

Danny reckons the front tank is big enough for the racing side of things while the additional tank in the rear is “so I can do Powercruise, or drive it down to the pub”. 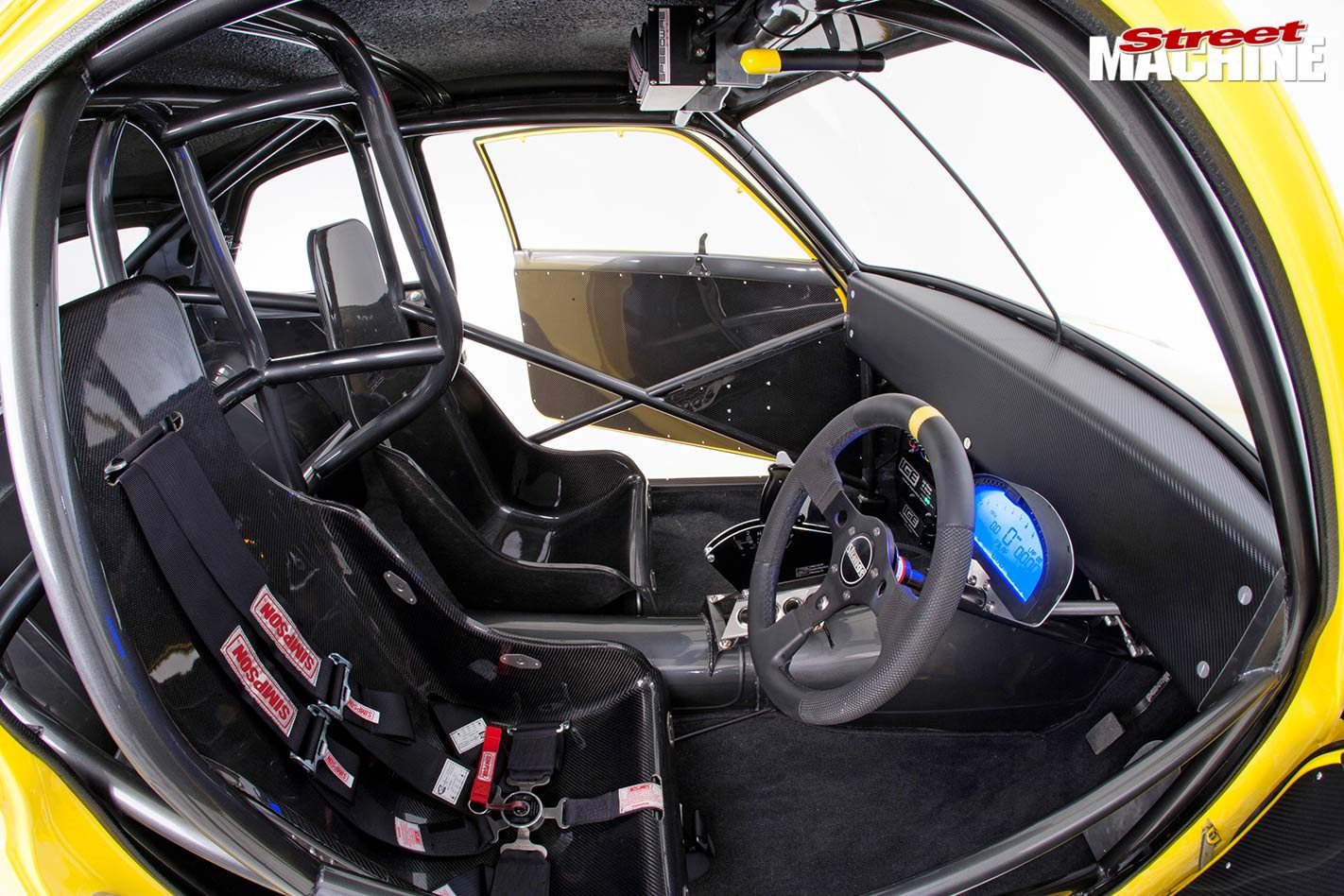 The dash panel is just a piece of folded sheet with a carbon fibre wrap but it looks sweet with the carbon-fibre seats. All the info flows through the Racepak dash. The transmission tunnel has been raised to accommodate the car’s slammed stance, with the whole thing tied together by a funny car-style ’cage

Once the fab work was finished Danny brought the car home for plumbing, wiring and mounting components before stripping it all out again and shipping the shell off to Jason Hoctor at Drag Car Modifications for body and paint.

Colour choice was easy. “When you’ve got two similar cars, you might as well make them both the same,” Danny reckons.

Jason went to town on the body, repairing and smoothing everything inside and out before coating it with DeBeers yellow. Looking brighter than the sun the freshly painted shell made its way back to Danny’s shed for final fit out. But then Danny busted himself up badly.

“At my 40th birthday party I was dancing on a plastic chair when one of the legs broke and I fractured my left wrist in the fall. Then a month later I was moving my car trailer and the flip-up jockey wheel gave way and squashed my hand between the jockey wheel and the trailer. I had to have surgery on my right wrist and 37 stitches.” 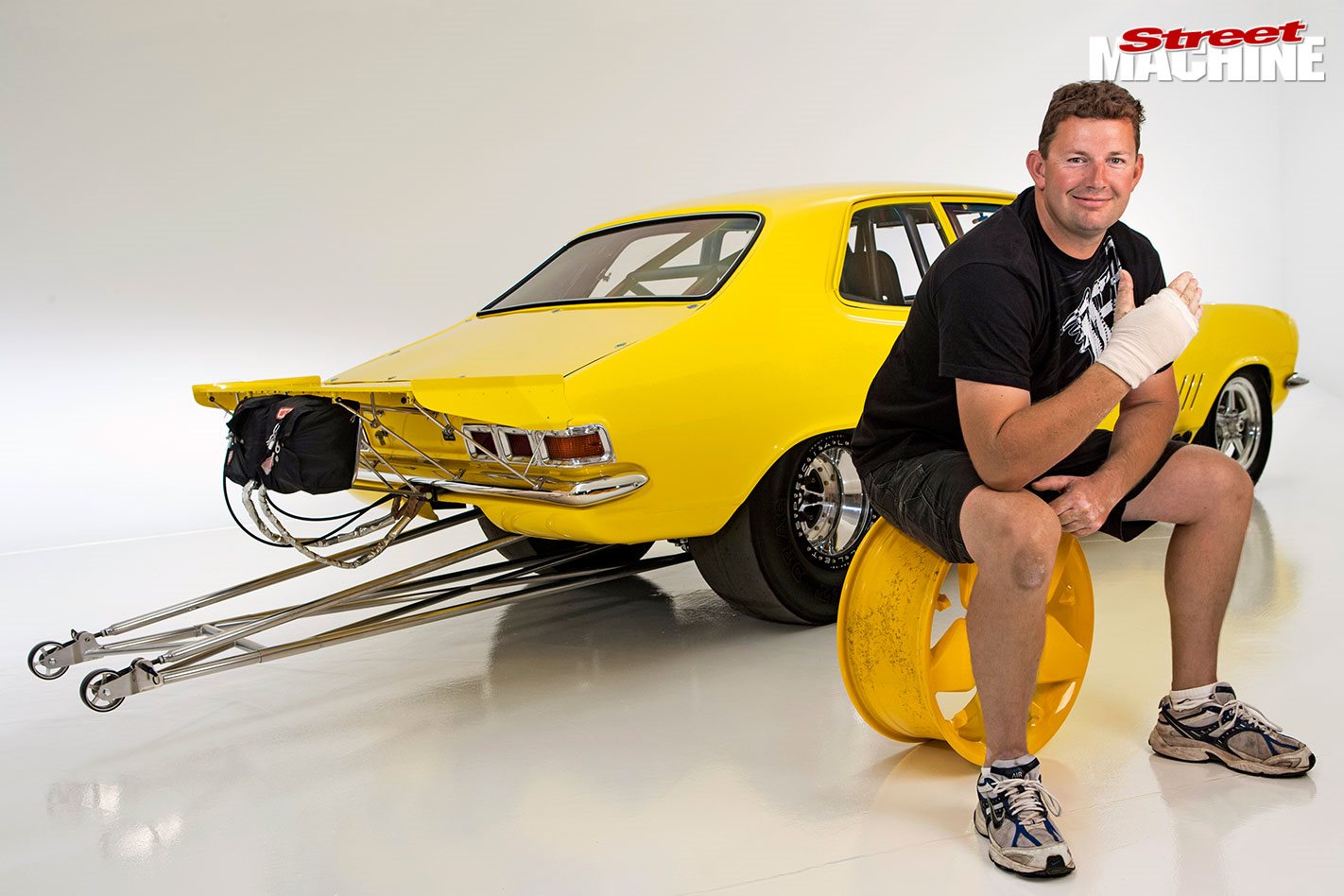 With Summernats 26 approaching fast, the reassembly job fell to others to finish. “I had to rely on some great mates [see thank-you list] to help me assemble the car,” Danny says. “It came up better than I ever imagined.”

It certainly made an impression when the bright yellow beast made its Summernats debut. Danny’s Torana featured strongly in Tuff Street where it took home Best Comp Tuff. At the moment though the Torrie hasn’t hit the track yet because there’s a few more things to do like plumbing in the AMS1000 boost controller and fitting a fire system. Danny may have to add some weight to it as well. “The rules have changed and it might be a bit light now, but that’s what happens with a four-year build.”