Tom Pulleine went looking for a Ford Mustang, but lucked onto some rare and luxurious Aussie muscle instead

FIRST sold in August 1973, the Ford Landau hit Australian showrooms with a split personality. Based on the XA Falcon coupe, it shared its front end and interior with the luxurious Ford LTD four-door, while the tough driveline was lifted directly from the GT. The rear of the Landau also featured a different tail-light panel, with a single strip of lights. The look was certainly more American than Australian.

One look at Tom’s Landau and you instantly think of the Super Pursuit Interceptor from Mad Max. It’s real a credit to the Tipper brothers, who refurbished the shell and gave the Landau its glossy coat of paint. The panel gaps are perfect

The Landau’s Cleveland V8 was mated with a three-speed FMX auto, and the car had disc brakes at all four corners – the first Australian-built road car (along with the LTD) with this feature.

The last Landau rolled off the line in 1976, coinciding with the introduction of the new LTD. A total of 1385 Landaus were built from 1973 to 1976, making it one of Australia’s rarest muscle cars. At the time, it was the most expensive Aussie road car ever sold.

Tom Pulleine owns the immaculately sinister black example you see here, but according to him it all happened by accident. “We weren’t actually looking for a Landau; we were looking for a Mustang,” he says. “We saw it outside a workshop and liked the look of it, so we ended up buying it instead.”

This was around 2008. Tom reckons the car came with a slightly worked 460ci Ford big-block and that the paint was good, but it’d certainly seen better days. “The motor was pretty run-down,” he says. “The previous owner gave it a bit of a hard time. We drove it around like that for a while because there was a four-year wait to get it into the shop we wanted. We were certainly keen to put some life back into it.”

The shop Tom is referring to is run by the Tipper brothers, who he says do everything old-school. “These guys are professionals,” Tom says. “We just wanted to get the car done to show people you can do up a Landau without being a grandpa with a cardigan.”

The body was refurbished and resprayed in Ford Silhouette Black, giving the car a new lease on life. One glance at the horizon line reflected in the Landau’s paint and you’ll appreciate how much time and effort was put into the panelwork.

The Tipper brothers also put together a brand-new engine while the car was in their shop. Under the glossy black bonnet scoop sits a 760hp Ford Racing A460 big-block sporting Super Cobra Jet heads, Diamond pistons, a Scat forged crank, an Edelbrock Victor manifold, and a COMP cam.

The C6 Pro Street/Strip gearbox is mated to a 4.11-geared Ford nine-inch with 31-spline axles and a Truetrac set-up.

The Weld wheels sit nicely under the guards, with just enough rubber that you couldn’t go any bigger. The Mickey Thompson ET Streets at the back serve notice that this Landau has plenty of grunt on offer

Along with the body and driveline, the suspension and brakes were also freshened up. The rear now employs five-leaf toughened Landau springs, while the front sits on a set of King springs. Monroe shocks take care of the damping at both ends.

Other than fitting slotted rotors and high-temperature brake pads in the front, the Landau retains its factory GT Falcon-spec brake system.

The Landau’s original 351ci Cleveland V8 is long gone, replaced by a Ford Racing A460 big-block that’s very, very warmed up. Tom tells us it’s made 760hp on an engine dyno. Both he and his wife are very keen to run a quick pass in it

The interior has been kept original, with the exception of the stereo and the B&M shifter. Tom says the interior was one part of the car he wasn’t keen to touch. “It was nice to keep it original,” he says. “We thought about putting a rollcage in, but decided against it.”

Now the car’s finished, Tom drives it as often as possible. “We try and get it out once a month and do a couple of night-time cruises,” he says. “It’s pretty thirsty. It runs on 98 and we get around 200km to the tank. The C6 gearbox can easily handle the power, and the 4.11 gears get it off the line quick. We want to run it at the drags soon, and after that we might put some lower diff gears in it for cruising.”

Tom was keen to keep the interior as original as possible. Nothing has been replaced; everything is as it was from 1973, with the exception of the B&M shifter and stereo system. One thing is for sure: You’d never get a sore backside on an interstate trip – have a go at the size of the bucket seats!

Tom and his wife Tammy have aspirations of taking the Landau to the USA and cruising around. “We want to do something different with it,” Tom says. “It’d be good to get it over there and show it off. A lot of people in Australia think it’s an American Charger. They’re like: ‘Nice Charger!’”

The Ford XA/XB coupe body with the LTD front, combined with the subtle bonnet scoop and 325-wide rear hoops, certainly make for a very menacing Ford muscle car, especially in black. It’s very reminiscent of the Mad Max Pursuit Special Interceptor, but with that luxurious LTD interior – and more cubes than you can poke a stick at. 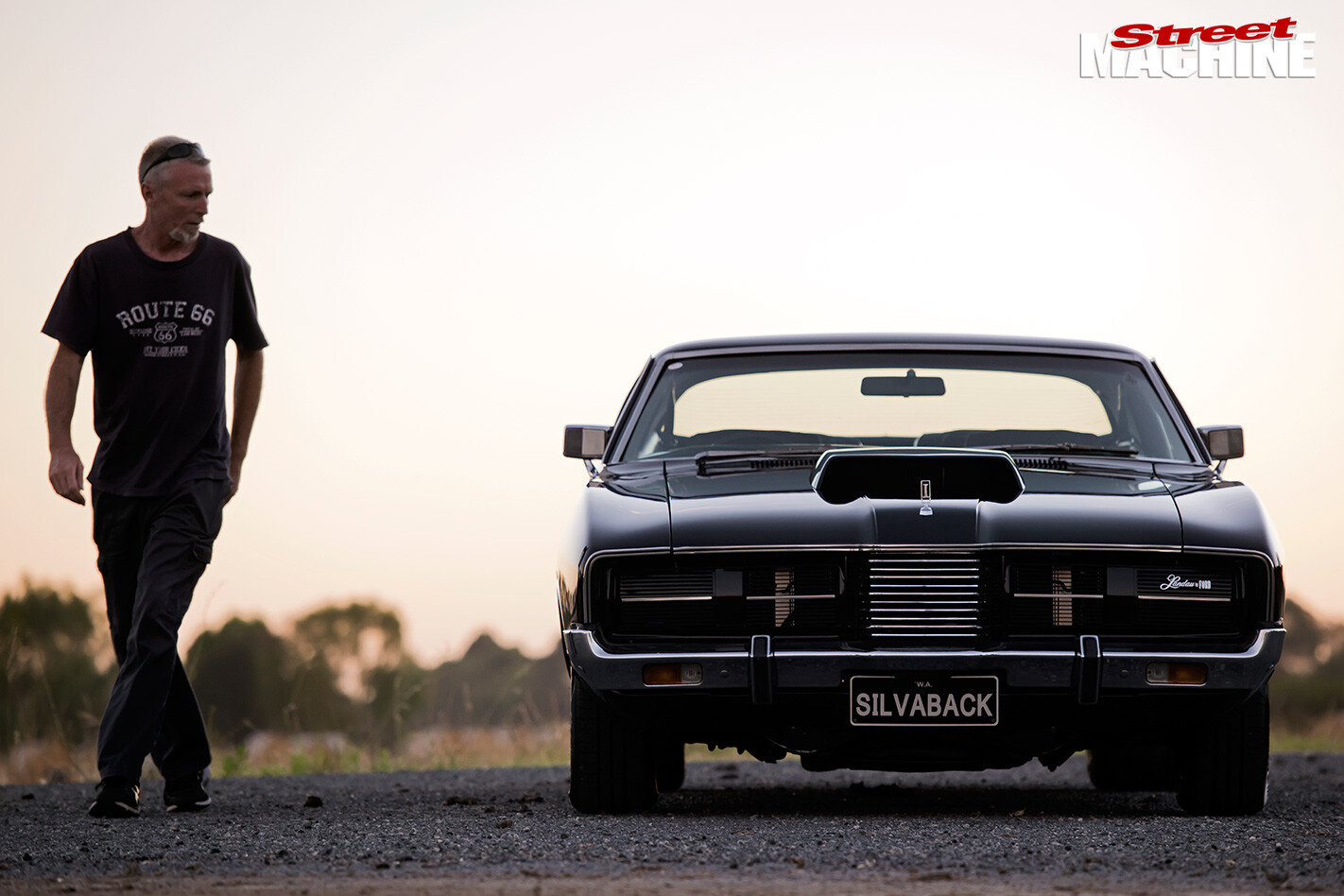