FOR Kris Hodges, motoring bliss is getting out and doing some miles, so building a car that he couldn’t drive whenever, wherever he wanted simply made no sense. 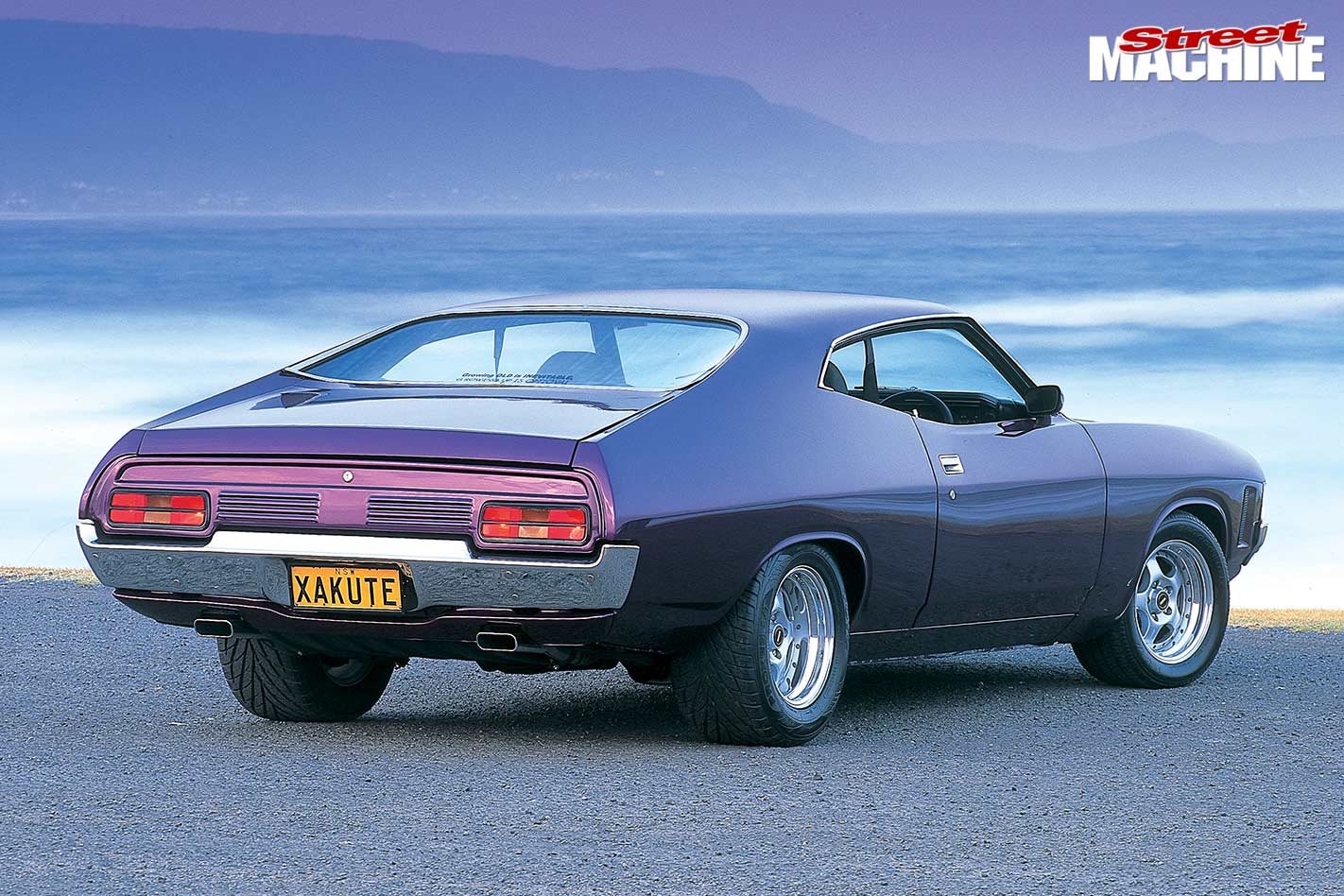 “It had to be 100 per cent legal”, Kris declares. “I’d love to have the coupe’s belly scraping on the ground, bigger, fatter tyres filling those cavernous rear guards and a whining metal mountain hanging out of the bonnet, but as I get older, the risks and the hassles just don’t seem worth it.

“If the cops pull over the XA, they can go right over it with a fine-tooth comb, everything is above board, and there’s an engineer’s report that permanently lives in the glove box, which lists all of the relevant modifications.”

This is not Kris’ first hot car. Long-term readers may remember his 1 TUF XB (SM, Sep ’92). The Lagoon Blue XB sedan, which made the Summernats burnout final more than once, was stripped and sold off which left Kris itching for another toy. In October ’98 he dragged home the basket case XA Superbird coupe shell, which he found buried under a pile of mattresses in a Sydney furniture shop. 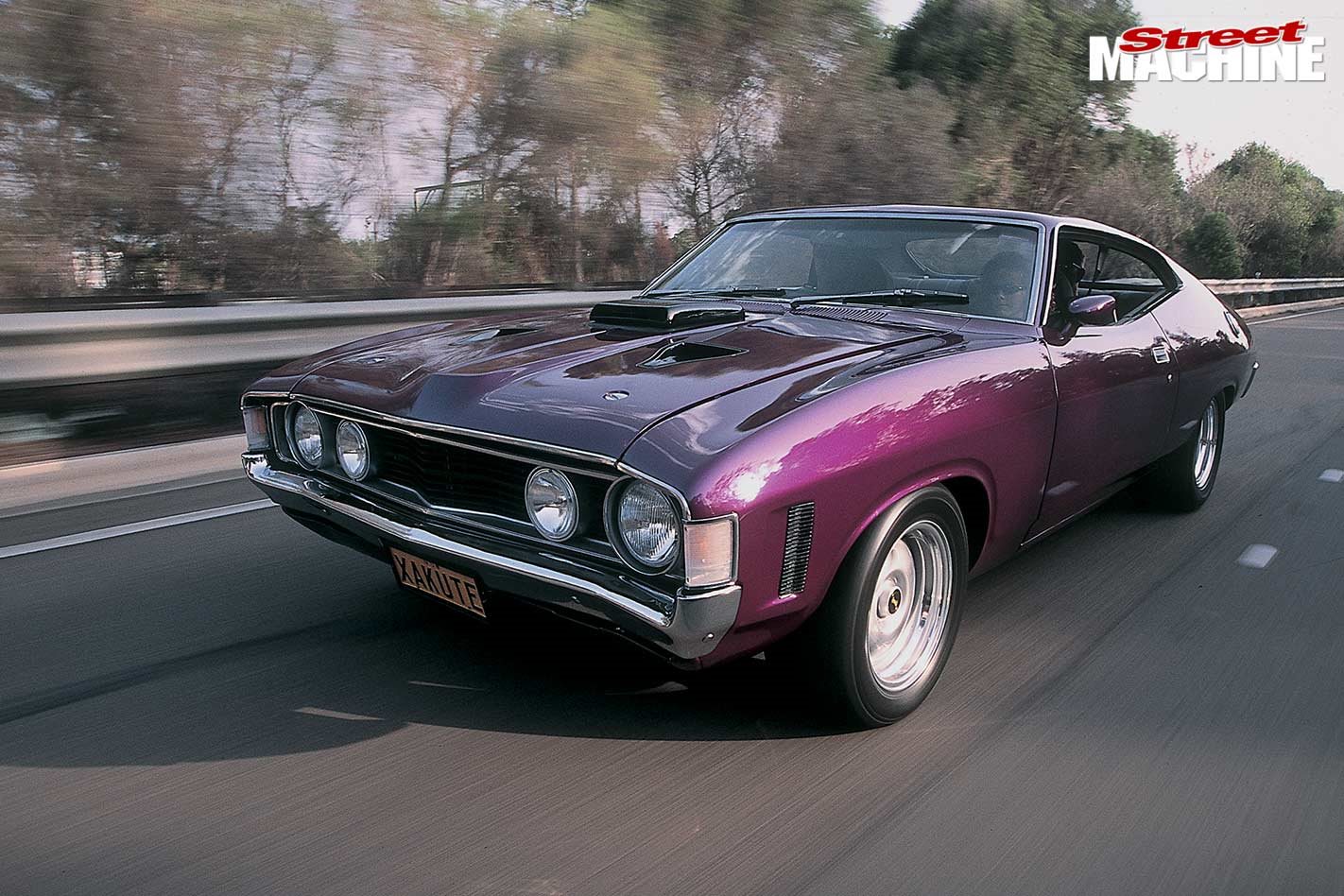 Before getting too far into the project, Kris consulted a number of engineers about fitting a pair of fat 15x10 B45 Simmons under the coupe’s hindquarters. While eights were as big as most would consider, he finally got the nod – with a few conditions. The coupe would need to use an XB GT disc brake rear end to cope with the higher load-rated, double-width wheel bearings. And the car had to be registered as a GT, because according to the RTA Code of Practice for Light Vehicle Modifications, a car must weigh 1400kgs to run 10-inch rims and the regular coupe was too light.

“No problem,” replied Kris, “all I had to do was fit all the (heavier) GT running gear, even the spring plates have GT stamped in them.”

Using 15x8s up front would have increased XA’s track to more than the allowable limit, so XF upper and lower control arms were employed and allow the eights to just scrape in. Work underneath didn’t stop there with brand new springs, shocks, bushes, discs, calipers, seals and brake lines fitted, and then the whole shebang was painted straight black for easy cleaning. Kris did all the wrench work himself, and he’s more than capable considering he runs his own mechanical repair business, Kris Hodges Automotive in Warilla. 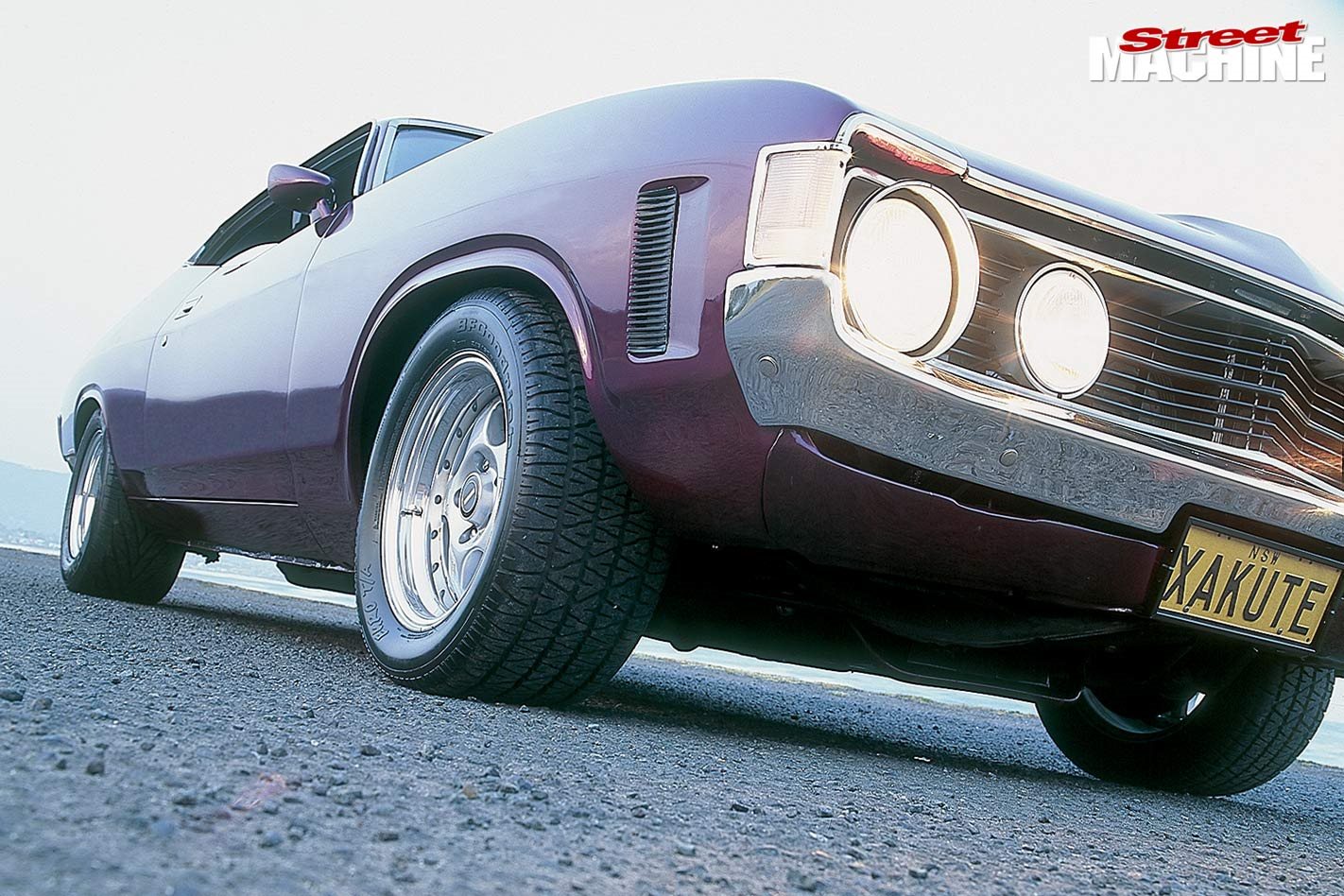 He also screwed together an engine which was reliable and strong, yet would happily run on a staple diet of high-octane unleaded. The grunty 351 Clevo received the very best of everything; Hi-Energy sump, high-volume oil pump, ARP rod bolts, ACL flat-top pistons, Stage III Heatseeker cam, Pete Jackson gear-drive all topped off by a pair of Gil Stocken ported and polished 2V heads (fitted with 4V valves), an Edelbrock Performer Manifold and 750 Holley. While the donk hasn’t made it onto a dyno, it makes more grunt than those fat 295/50-15 Toyos can handle.

Passing on the grunt is a Warilla Automatics prepared C4 auto with full manual valve body followed by the aforementioned XB GT diff courtesy of Sydney Competition Warehouse. Keeping things cool is one of Aussie Desert Cooler’s new Burnout King radiators which more than adequately does the job. 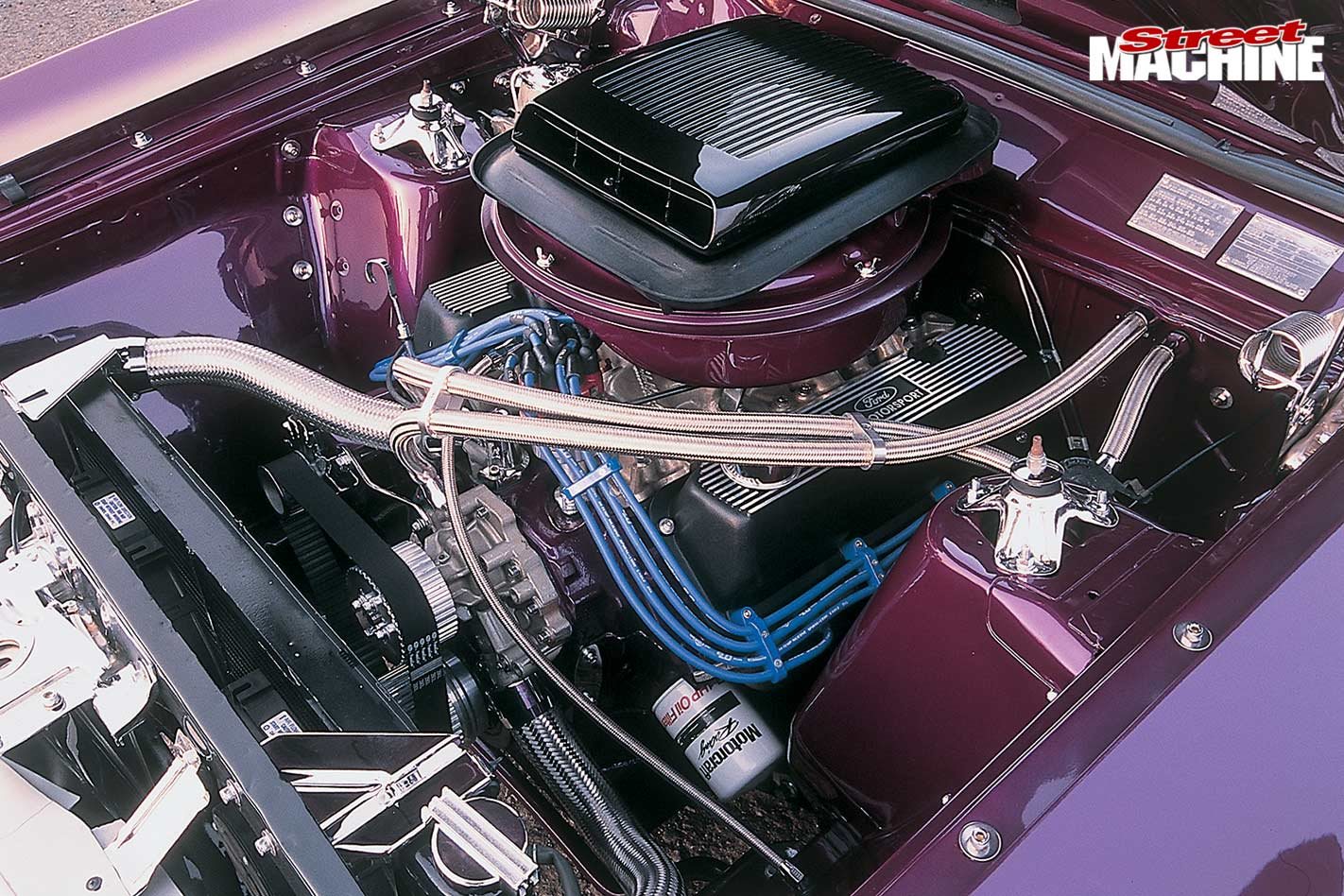 “I cruised Summernats all day and it never even once looked like getting hot,” Chris says.

With the mechanicals sorted it was time to concentrate on that sensational body. Twelve litres of paint stripper revealed a relatively rust-free shell, which had little damage other than a dreadful repair to the rear quarter. Good mates Gary Durnace and Troy Micaleff spent hours ironing out the coupe’s panels before the near-completed shell was shipped to Coombes Drive Smash to be prepped for painting. 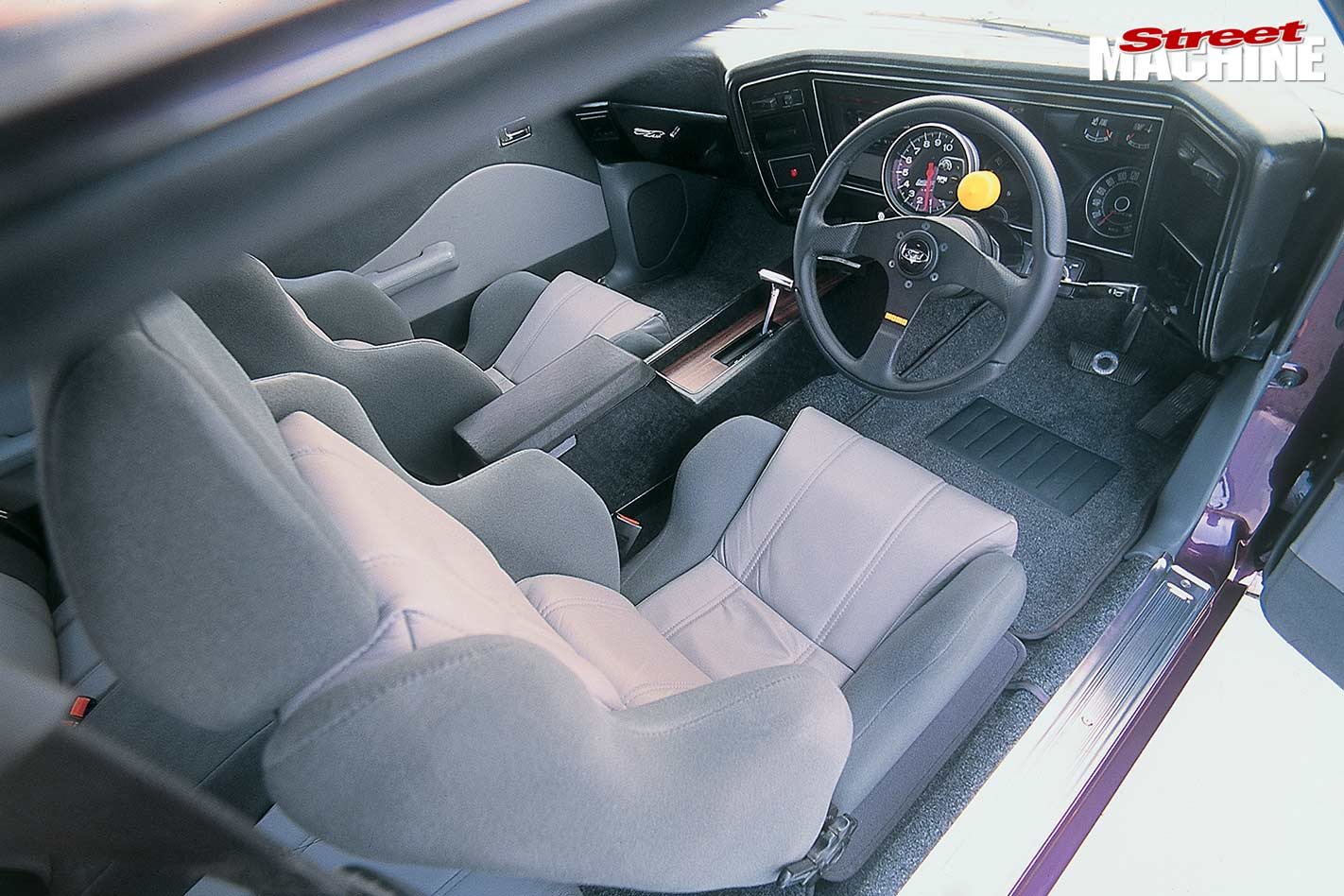 Before applying the gorgeous Violet Pearl, Bill and Ashleigh from Lower Mountains Smash spent many hours (and a Wild Turkey or two) matching the colour to Kris’ 1997 Harley-Davidson Fatboy. Check the flawless reflections and sensational panel fit. No wonder XAKUTE has managed to snag 13 trophies in just five shows – not bad for a car that’s never seen a trailer and has managed to rack up almost 8000 kays in just a few months since completion.

Inside it’s an all-leather affair. EDS Trimming in Melbourne supplied the cowhide-covered Aerotech seats. They also sculptured the rear seat to give the rear passengers a bit of extra support before covering the altered bench and the door and side trims in matching grey leather. From there Southbridge Auto Electrics stepped in and resolved all the XA’s electrical woes with a complete rewire which included power windows, big Hella H4 headlights and a deft job of hiding all the engine bay wiring. 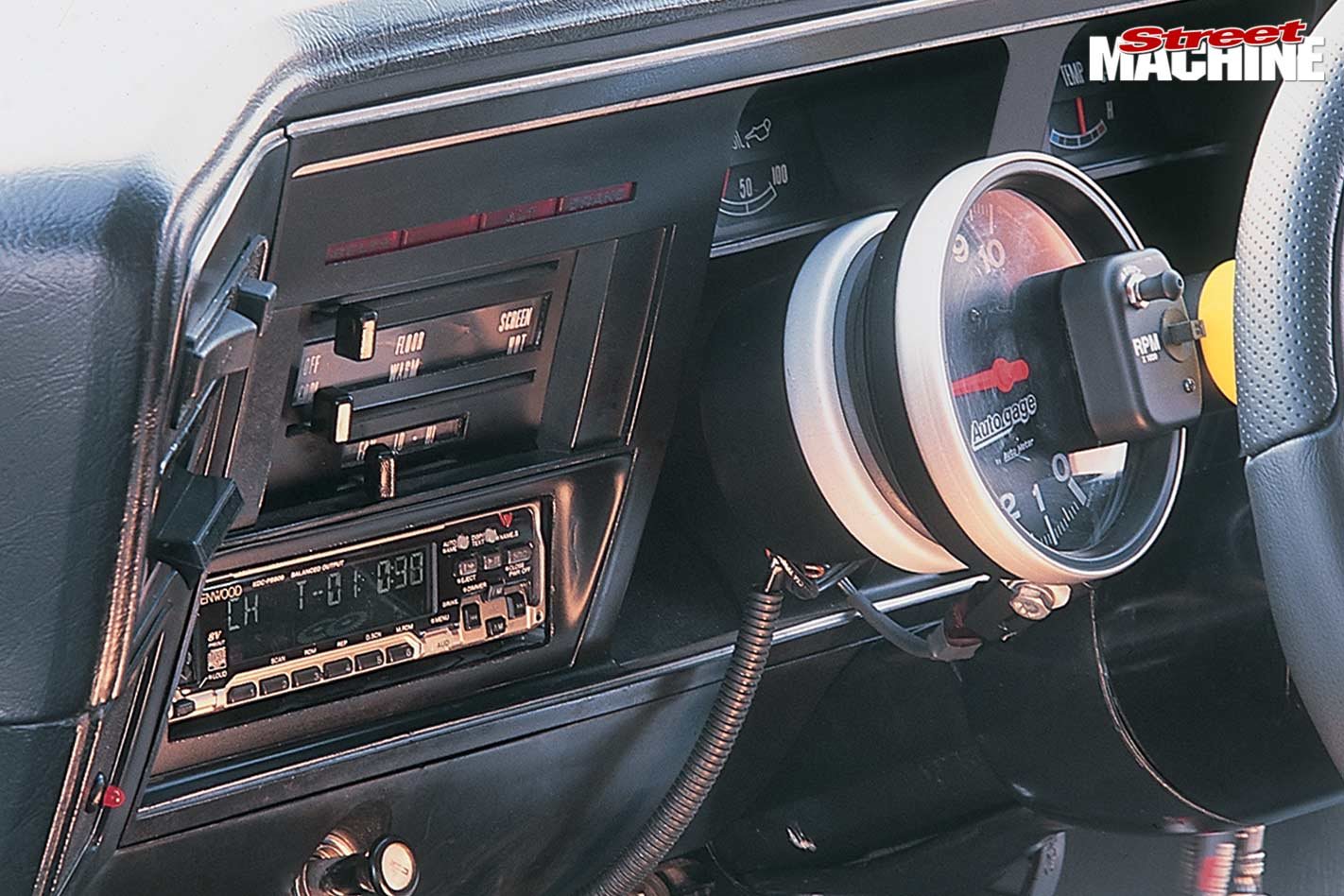 With the car finished, it was off to the engineer for his appraisal and it passed first time with flying colours. As for future mods, Kris has got his eye on one of those RRS strut front ends, a Hopper Stoppers brake upgrade, and maybe a pair of alloy heads. The biggest hurdle will be of course trying persuade the bank manager to keep his sense of humour. Then again maybe it will be trying to find time to work on his car while trying to finish rebuilding Leigh’s recently purchased XB GT coupe. Let’s hope he leaves himself some time to enjoy his magnificent street-legal cruiser. 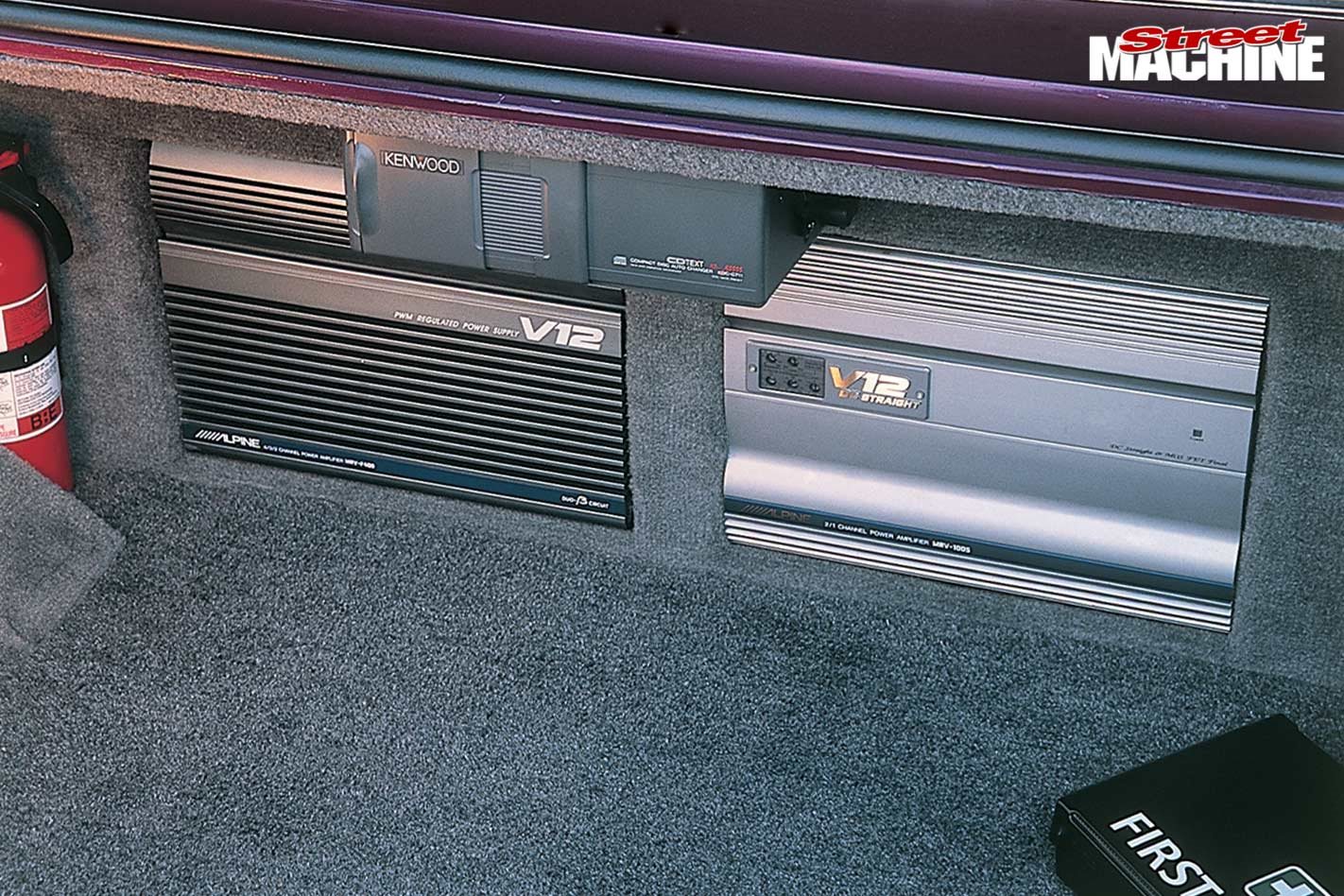 YOU can’t go cruising without good tunes, so into the dash (using a custom fibreglass facia) went a four-volt Kenwood MASK CD/tuner mated to a boot-mounted 10-stacker CD changer. Output signals from the Kenwood head off to the two Alpine amps, which are also mounted in the boot. One of the two amps is a two-channel unit that powers a pair of thumping 12-inch Fusion subwoofers, which fire into the back seat. Running off the second four-channel amp is the parcel tray-mounted Alpine 6x9s and a pair of six-inch MB Quart splits housed in the front kick panels (Kris didn’t want speakers mounted in the doors). They feature removable press-fit grilles and were custom made using part of the original plastic kick panel and moulded using MDF and body filler. The audio installation was done by Richard Whitby and Craig Parker, with Richard constructing all the boot panelling. 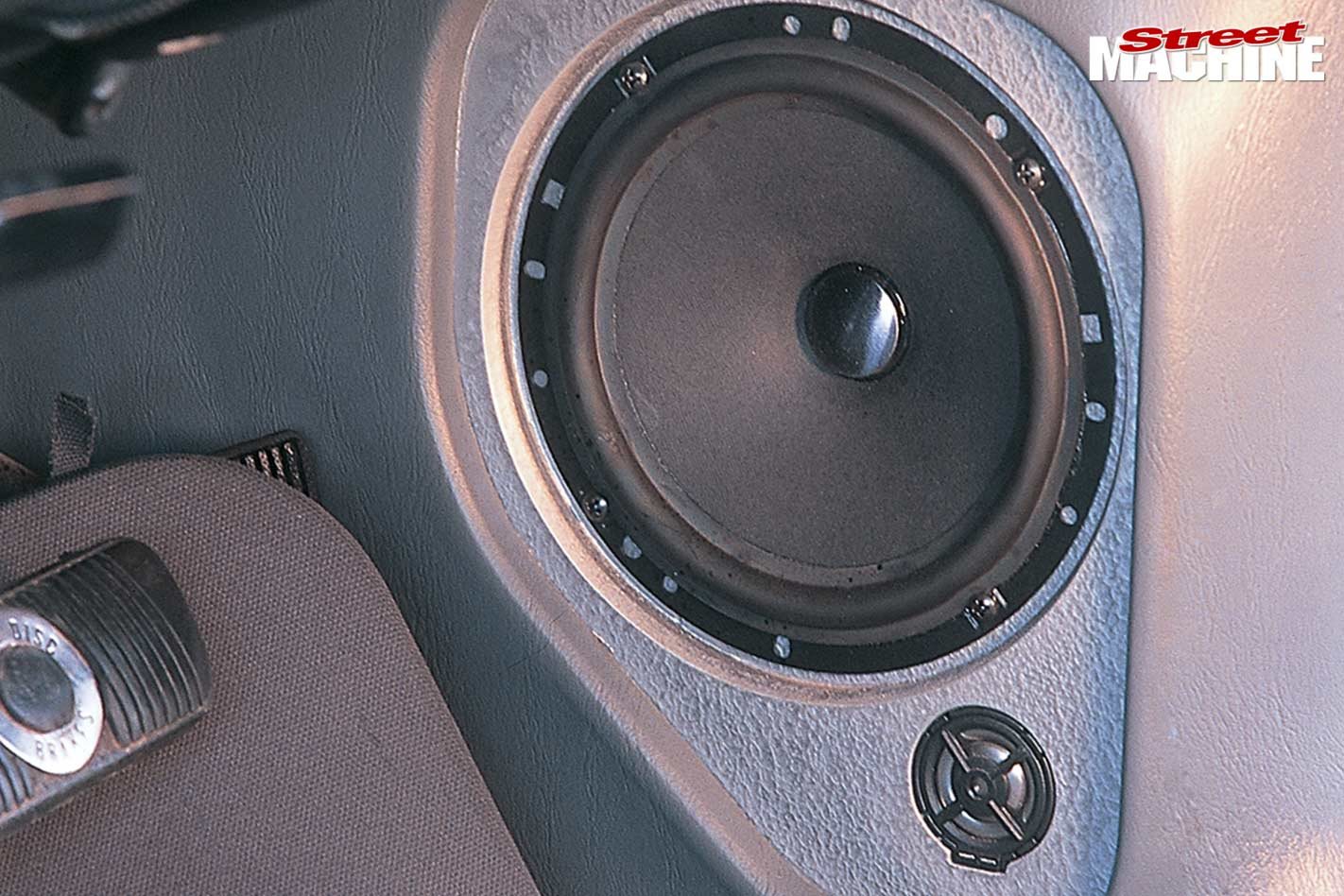