HOW did you come to be thumbing through this issue of the horsepower bible? Are you a third-generation gearhead with years of greasy fingernails to your credit, or a curious newbie drawn to the mix of flashy paint, chrome and rubber smoke? Most of us fall somewhere in between, but either way the passion for the humble automobile can be a soothing relief from the daily grind; it eases stress – okay, it sometimes causes it too – and often lays the foundations for mateship and a whole way of life.

“I was the curious newbie,” explains 41-year-old Matt Balmer of his entry into the car scene. “It was 2007 and my father Les had not long passed away. I needed a serious distraction to help get me through that tough period, so decided I’d buy a car to tinker with.”

10
Buying a Dart or a Duster can be easier and cheaper than an Aussie Val hardtop or Charger, with excellent parts availability, plus fairly straightforwrad big-block options

After taking a sticky at Matt’s Plymouth Duster, it probably comes as a total surprise that he had never owned a modified car, nor really shown any interest in cars prior to this build; he was a completely blank canvas with no predisposition towards a particular make or model. 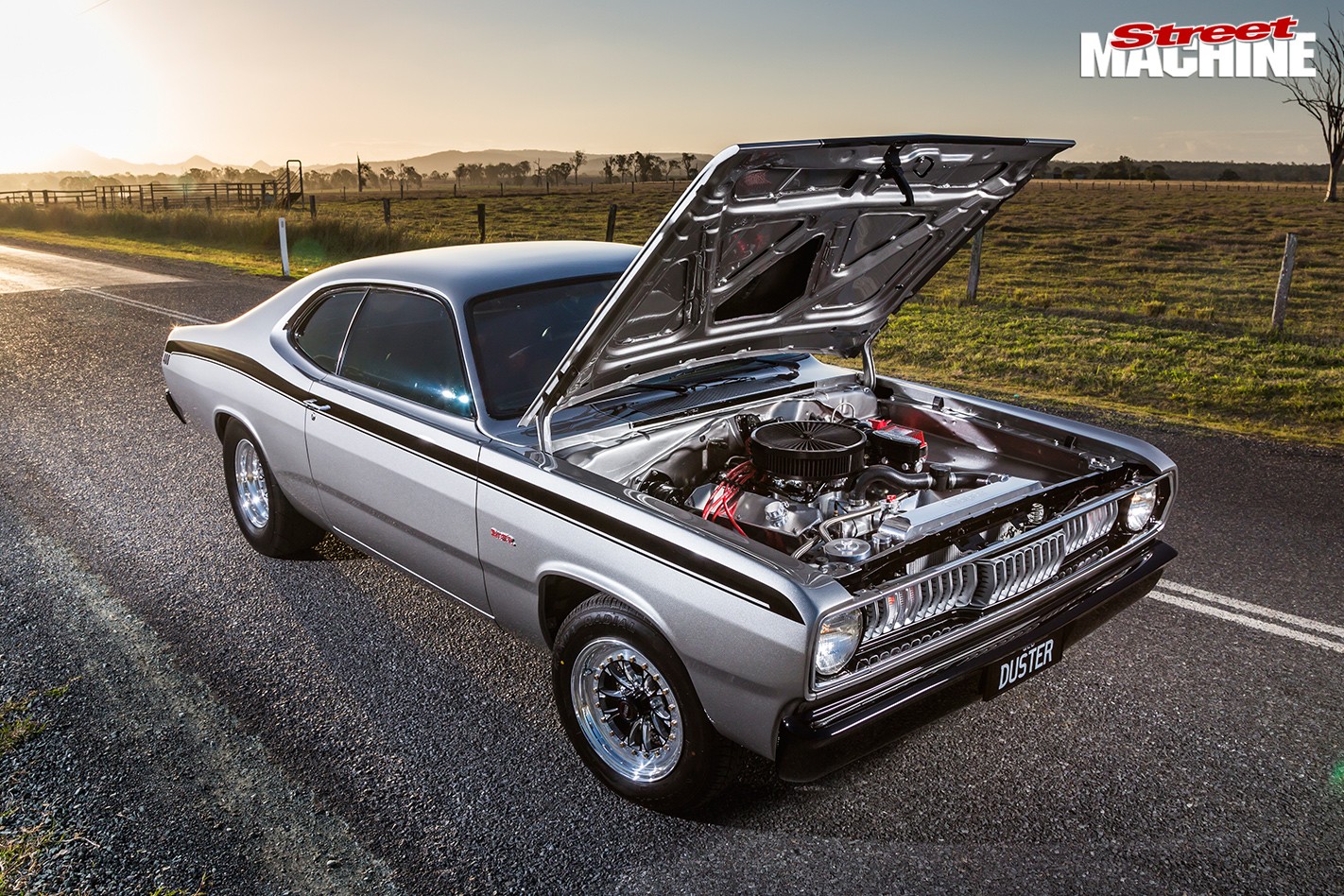 “I liked the look of a ’56 Bel Air, but everything I found was either totally stuffed or out of my price range,” he says. “My options were very open, and I liked the look of a ’75 Plymouth Duster I’d seen both in a trader mag and in the flesh at Mopar Sunday. It’s the first one I had ever seen and was really taken by its aggressive fastback styling.” 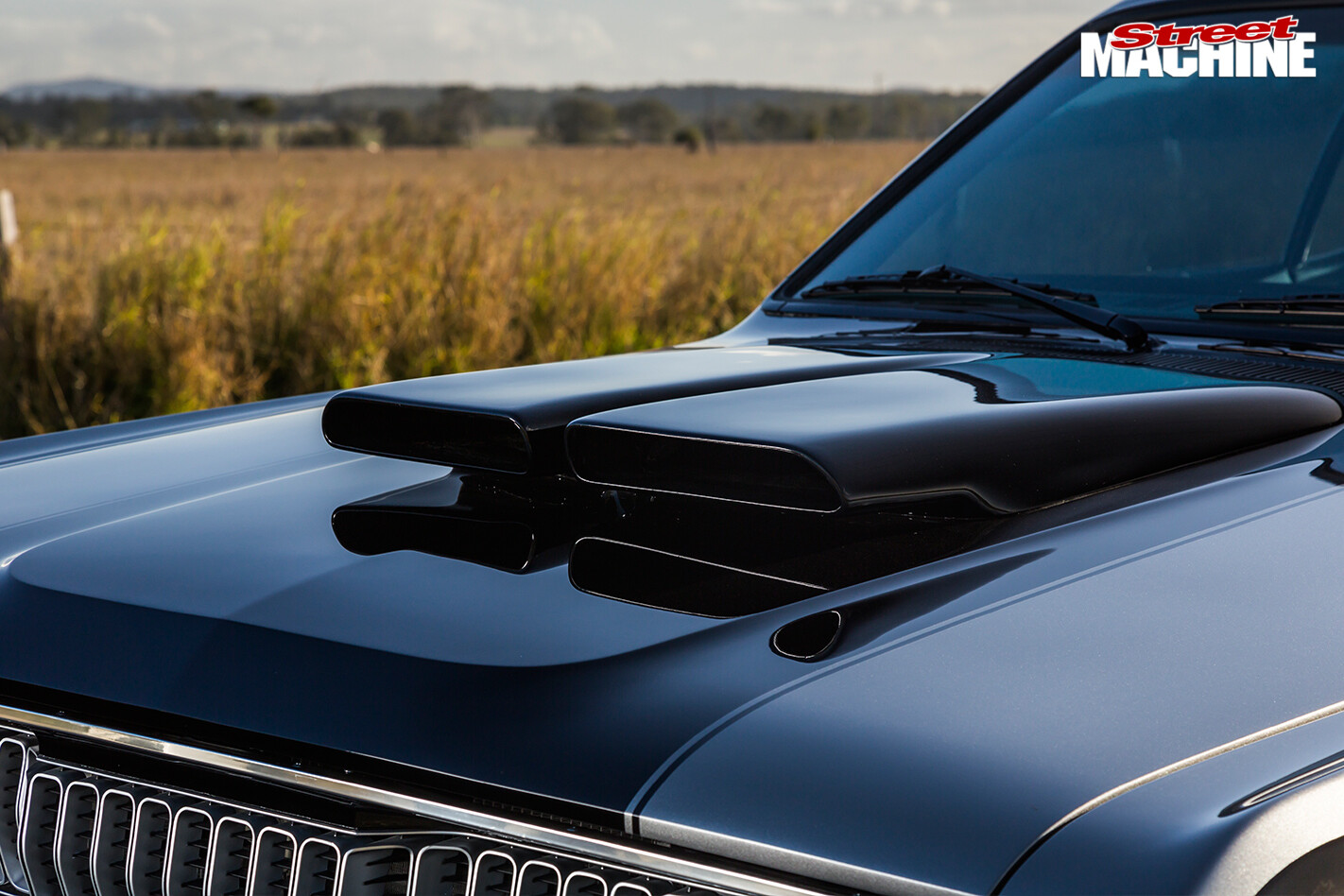 Convo Pros aside, the Duster in question was a dead-stock, hairdresser-spec original car, with power steer and air con stifling even more grunt from a smog-choked 360. Nevertheless, the Plymouth filled all of Matt’s criteria: it was V8, tidy, and could ferry the entire family around in relative comfort. So a deal was struck and Matt had a project to keep his mind occupied.

10
Matt wasn't too fussed on the soft stylings of the factory '75 Duster front end treatment, so had the original bonnet modified to match the more aggressive '72 Duster grille and added a factory twin-snorkel scoop

Racing go-karts as a kid taught Matt the importance of having some poke at his disposal, so the asthmatic 360 was lifted for a power infusion by Tony O’Connor at Toca Performance. That initial 520hp upgrade helped the Duster to an 11.3@120mph best; however the latest 620hp build is yet to see the quarter.

This revamped combo retains the cast block, which was stretched to 408 cubes using a Scat stroker crank and Scat H-beam rods, with ported Edelbrock alloy heads making best use of a custom-grind hydraulic-roller camshaft. A 950cfm Quick Fuel carb mounted atop an Edelbrock Performer manifold sort the intake side, while TTI headers and a twin three-inch system handle exhaust duties. 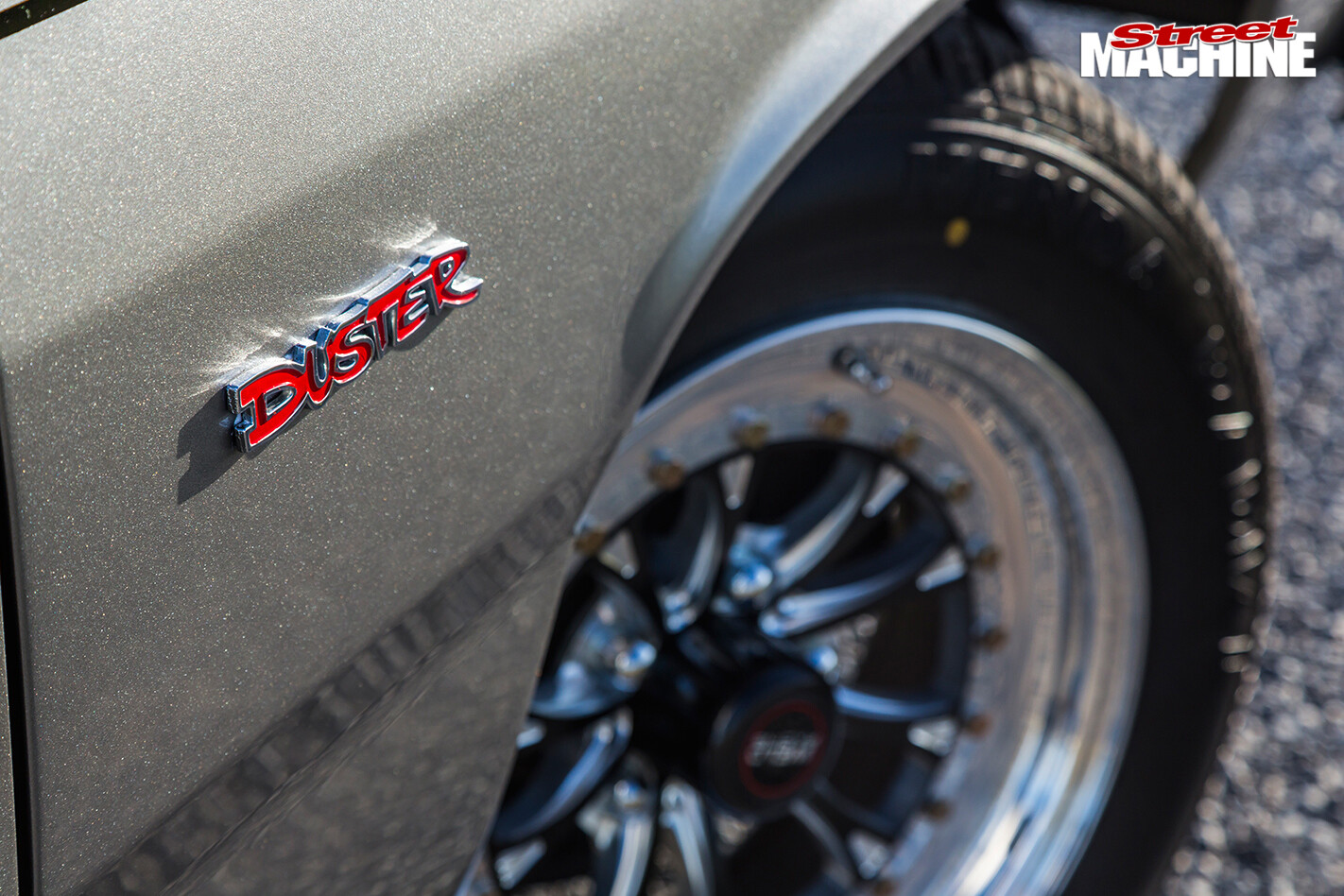 An Aussie Desert Cooler radiator soothes a tough Queensland summer, while a full complement of products from the MSD catalogue were a no-brainer for quality ignition performance.

The 904 Torqueflite was retained, but rebuilt with a shift kit and fronted with a Dominator 3600 stall converter, while a nine-inch diff running a Truetrac centre and 3.9 gears rounds out the drivetrain.

Fresh panel and paint weren’t originally on the cards, but that changed early last year after Matt and the Duster had a minor altercation with a chainwire fence; it left the original red hue looking a little worse for wear and prompted the visual makeover laid out before you.

“It was probably a blessing in disguise, as it gave me the opportunity to make the Duster look like a proper muscle car and not just a tidy stocker,” Matt says. “I wasn’t that fussed on the 1975 model’s front end treatment either, so I collected the necessary parts to retrofit a ’72 shark-toothed grille.”

10
The engine bay's clean surroundings are a far cry from its factory layout jam-packed full of smog gear and power-sapping accessories, with Matt choosing to balance neatness with serviceability

Pat O’Shea and his team from Pat’s Pro Restos were entrusted with the Duster’s makeover, sorting 40 years of blemishes and shaving the body of superfluous side markers and badges. The 1975-model bonnet was modified along its peak to match the more aggressive and straighter ’72 nose, before a custom-mix silver hue reinvigorated its 70s curves. Matt wanted the Plymouth to have the ‘mongrel’ look, so factory-style stripework and blackouts were added, with additional black used to coat the modified Aussie Valiant front bumper and smoothed Duster rear bar. Special attention was paid to the under-bonnet area, with Matt keen to make form follow function: “The stock engine bay was completely jammed full of accessories and 70s emissions gear; it was a mess. You could have thrown a handful of rice in there and not one grain would have touched the ground,” he laughs. The end result is a smoothened version of a stock bay that combines a minimalistic approach with sensible detailing and component serviceability.

10
The lounge-like front bucket-bench seat hints at this Plymouth's conservative origins, but was retrimmed in black along with the rest of the interior for a proper muscle car feel

The factory Chrysler disc /drum combination brakes were rebuilt, along with the stock torsion-bar front end and leaf-spring rear suspension. Extra goodies include Competition Engineering Slide-A-Link traction bars and chassis connectors that were whipped up by Matt. The suspension height was set to nail the perfect modern-day muscle car stance, aided by a set of Weld Vitesse rims measuring in at six- and eight-inch widths and shod in 165/80 and 275/60 rubber.

10
The column-shift assembly also went by the wayside, with Matt choosing a B&M shifter and a brace of accessory gauges as appropriate upgrades for the Duster's new persona

The factory interior remains intact, albeit restitched in muscle-era black, with a B&M shifter and a mix of Mopar Performance and Auto Meter accessory gauges the only aftermarket additions. With the Duster now back on the road and enjoying its fresh persona, Matt is looking to refine the interior and boot, and is keen to pick up where he left off at the strip: “I’m aiming for mid-10s with this improved combination, but racing is not the be-all and end-all for me and the Plymouth,” he says. “You can spend so much time working on a car that it gets to the point you just want to drive it and enjoy it. So that is exactly what I intend to do.”