Paul Vezinias rescued a VJ Charger from the parts reaper, filled it with 408 cubes of Mopar's finest, and now it's good as gold

CAR guys can be a crafty bunch. In my house we have our own GST – Guilty Simon’s Tax – which is secretly subtracted from an item’s true cost to give the ‘wife’ price. This ‘GST’ can exceed 1000 per cent in some cases, but it does keep projects moving forward while maintaining peace on the home front. 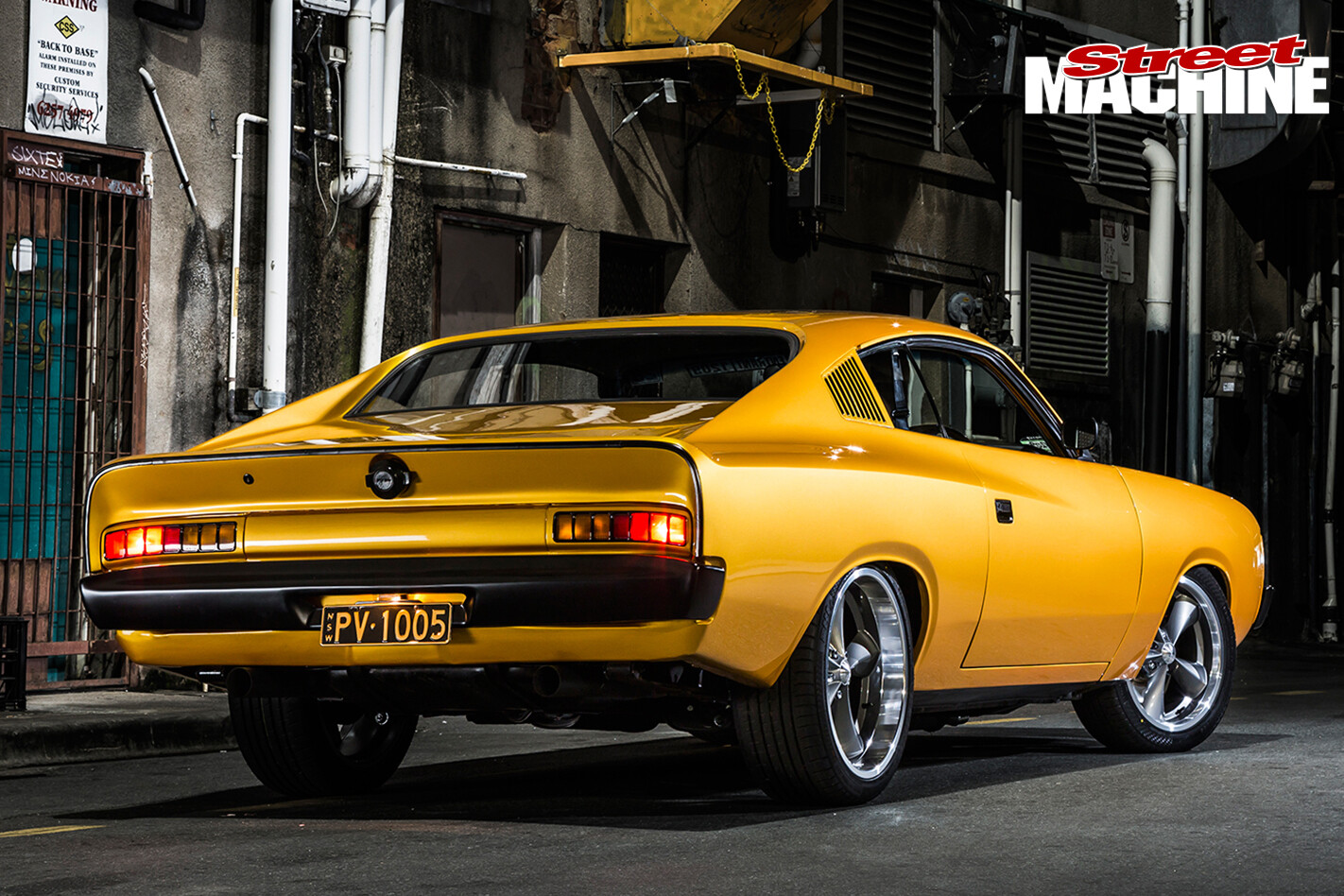 So I have to tip my hat to NSW family man and tough VJ Charger owner, Paul Vezinias, who makes my efforts seem amateur.

“I hid this Charger in storage for eight years,” he says. “I only revealed it to my wife Dimitra when the property was being sold and it had to be brought home.”

Paul is no stranger to the magic unveil; he had used a similar tactic with a tough VF Hardtop he built a few years earlier. 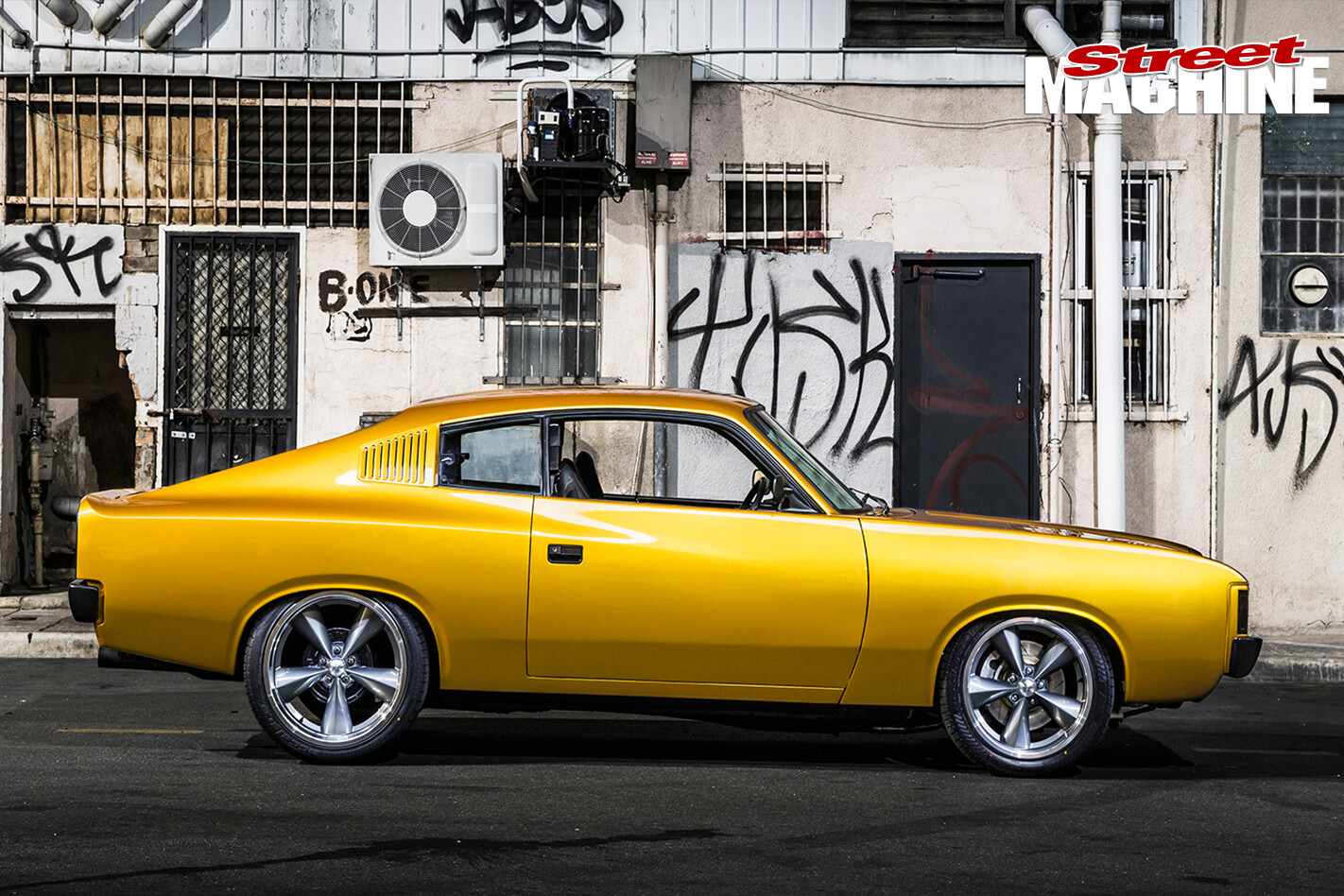 “I didn’t intend on buying this car, honest!” he laughs. “My son Liam and I were building another Charger as a father-son project and found the car while chasing parts for his. This guy was wrecking out a perfectly good, running, driving, V8 manual 770 Charger and I just couldn’t let it go to waste.”

Paul is a hero in my eyes for saving such a rare find, but an extra car in the drive was sure to make waves. “I knew something had to give, so I sold the VF. I specifically wanted a tough streeter and the Charger was just a better fit. I’d learnt plenty of lessons from building Liam’s old Charger and my previous Vals, so knew what had to be done and the best plan of attack. It was a smooth build that came together within 12 months.” 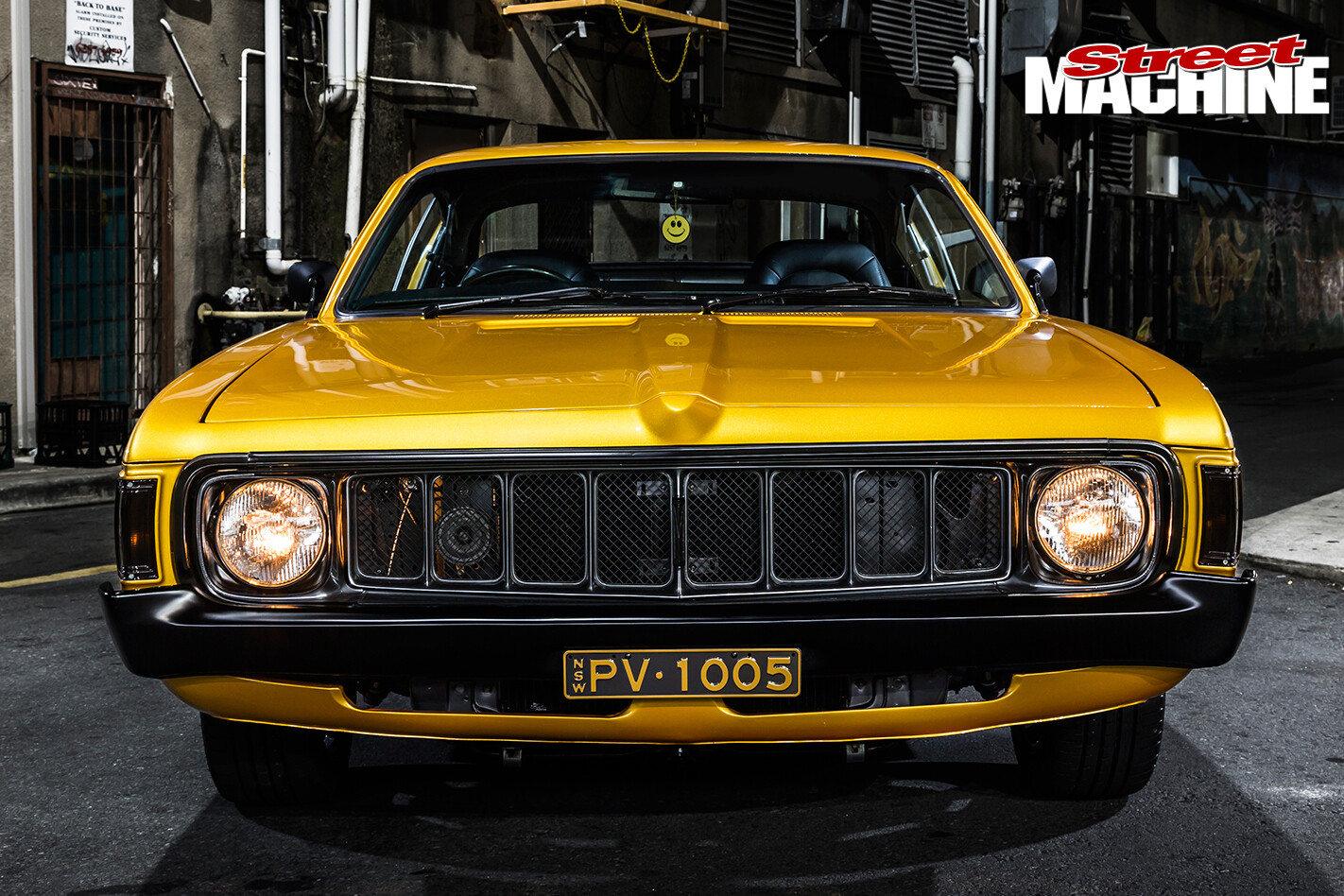 With a nice little kitty on hand from the Hardtop sale, Paul got stuck in and stripped the Charger bare, having it sandblasted and rotisserie-mounted for ease of repair. The original Charger metal was in pretty good nick, needing only basic rear quarter work, while the engine bay and panel seams were smoothed for a neater appearance.

The body was shipped to Johns Twins Accident Repair Centre, where Theo and the boys lavished the iconic coupe in a stunning Wildfire pearl. It’s based on a gold from the Commodore charts that was tweaked for extra pop, and moves through the orange and gold colour spectrums depending on the light. The bumpers were shortened, smoothed and tucked closer, before all the external brightware was sandblasted and powdercoated satin black for a truly unique look. 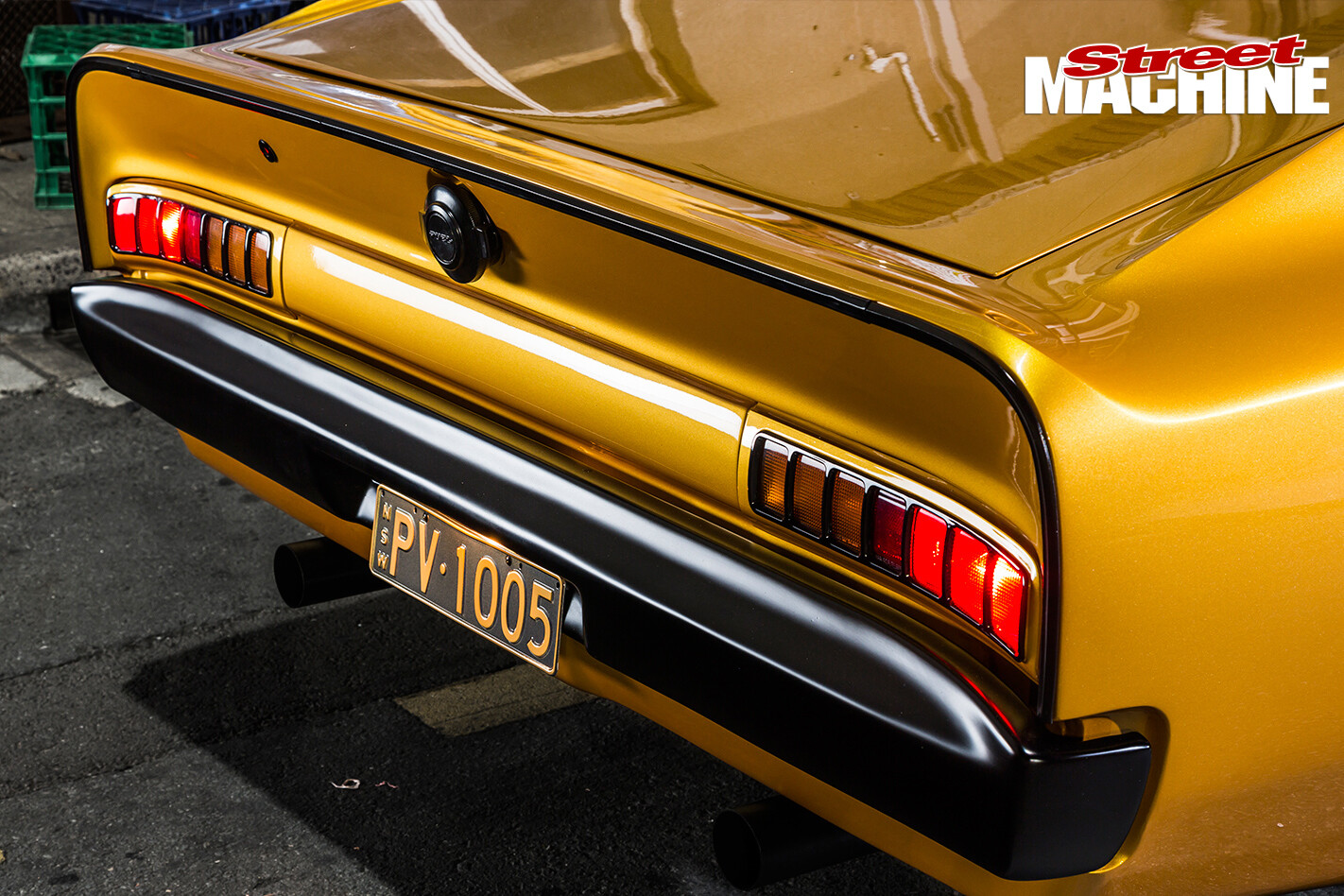 “I needed this Charger to be different,” Paul says. “The R/T look has been done to death and I wanted mine to have its own persona. I think the black both contrasts and complements the body colour and makes a far greater impact than if it were chrome.”

The 770-spec layout was retained for the interior, albeit retrimmed in black leather by Cassandra and Daniel at Trimspec. Black was the logical match for the exterior dechrome, while a three-spoke sports steering wheel and tacho dash adds a splash of factory muscle. When it came to the drivetrain Paul didn’t need to look far. “I’ve worked with Simon Kryger of Innocent Motorsports fame for 20 years so it was an easy choice. My brief to Simon was simple – it had to make plenty of power but be driveable. We worked out a budget and I left it in his very capable hands.”

Simon sourced a 360 Magnum donk, which was stroked to the popular 408 cubes and fitted with steel rods and JE pistons. A Comp solid cam and lifter package work in conjunction with Comp pushrods and stainless valves, the latter housed in ported Magnum cast heads. An Edelbrock Performer RPM Airgap intake is topped with a 650 HP-series Holley, while Pacemaker headers flow to a twin three-inch system with Hooker mufflers. 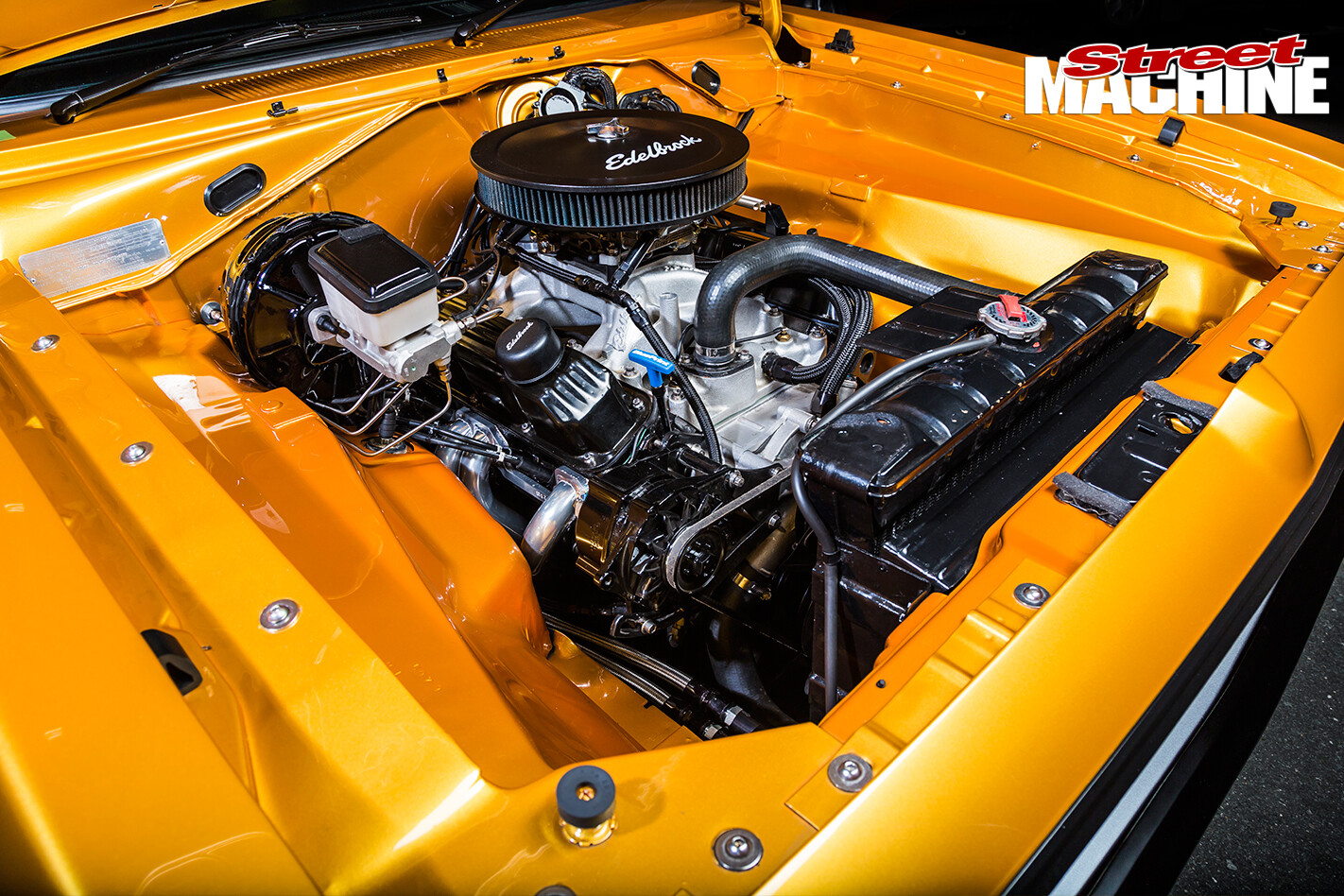 The factory single-rail four-speed was rebuilt and fronted with a heavy-duty Exedy clutch, while a custom tailshaft turns through to a factory BorgWarner diff housing filled with a rebuilt LSD.

PBR slotted discs and UPC twin-piston calipers are an improvement on the standard CAL front brakes, while 10-inch finned drums from a CL Valiant replace the smaller VJ assemblies. 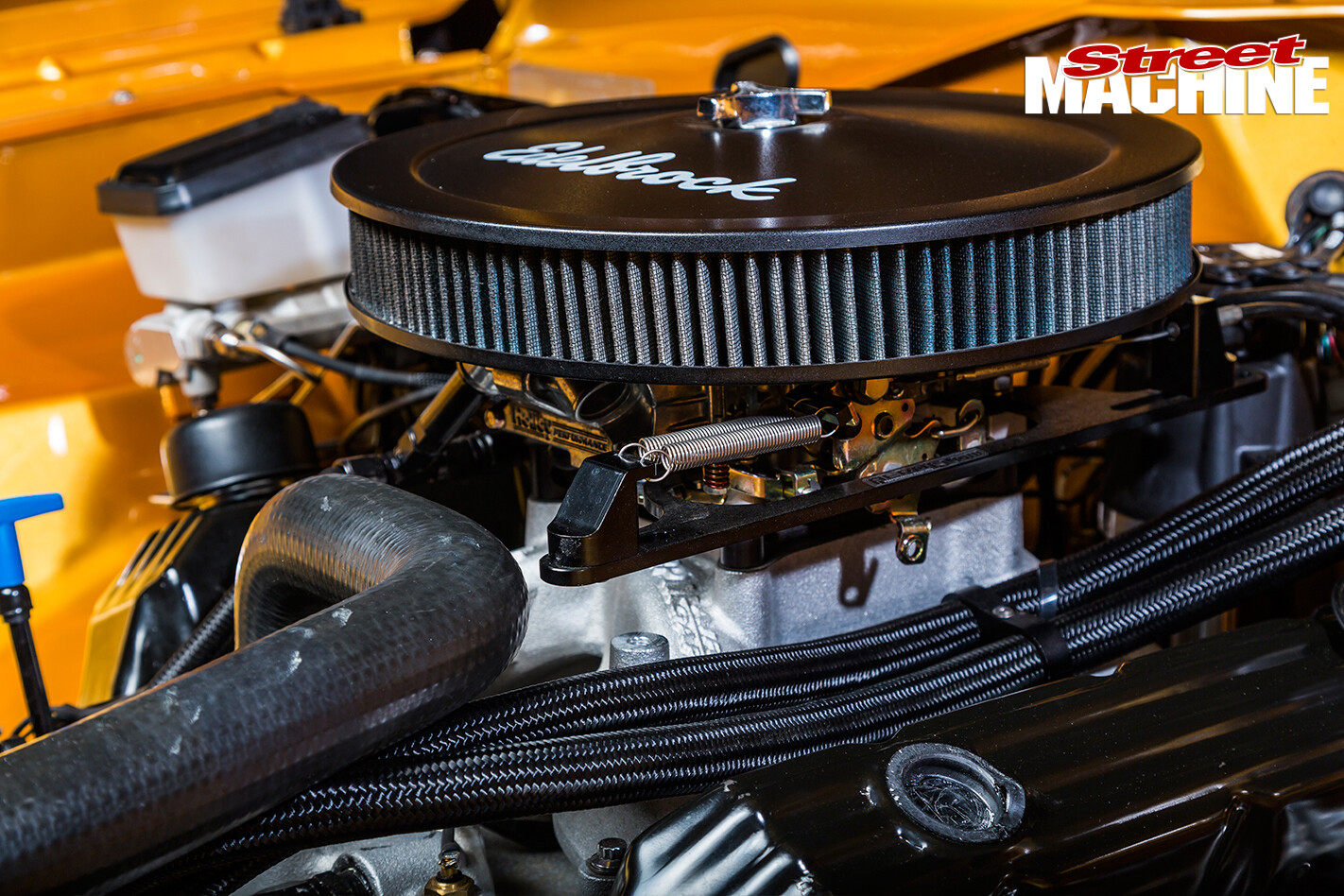 Up the front, the factory torsion bars were retained, aided by two-inch drop spindles to lower the ride height without losing torsion bar tension. The rear leaf springs were reset lower and mounted inboard via offset hangers for improved tyre clearance. The basic undercarriage was finished in satin black with all bolt-in componentry detailed in gloss, a perfect way to combine useability with subtle detail.

Plenty of late nights saw Paul’s plan come to fruition, with the hot coupe finished just in time for Summernats 28.

The VJ’s mix of street and show is sure to hold Paul in good stead for the future: “I built the car to be show-worthy but still practical enough to enjoy a family Sunday cruise with Liam and his VJ. I’m happy just to tinker along now making small improvements, and will probably fit air con before next summer.” So are there any other treasures tucked away that we should know about? “Definitely not,” Paul laughs. “Dimitra has my spare time earmarked for house renovations so that will keep me busy. I would love a 70s-era ’Cuda or Challenger but that will depend on finances and garage space; I won’t be selling the Charger to fund anything new.”

Renovations, eh? Sounds like the perfect time to extend the shed and build in some hidden storage space.