After he crashed his eight-second VL Commodore street car at over 250km/h, Goran Ivanovic decided to build an even lighter, faster and shorter-wheelbase car to replace it

PROJECT cars always have setbacks, and sometimes they can be massive – like sticking your pride and joy into the wall right down the very, very fast end of the drag strip, for instance. Unfortunately, Queensland’s Goran Ivanovic did just that with his infamous MYT16 VL Commodore. But he didn’t let it beat him! 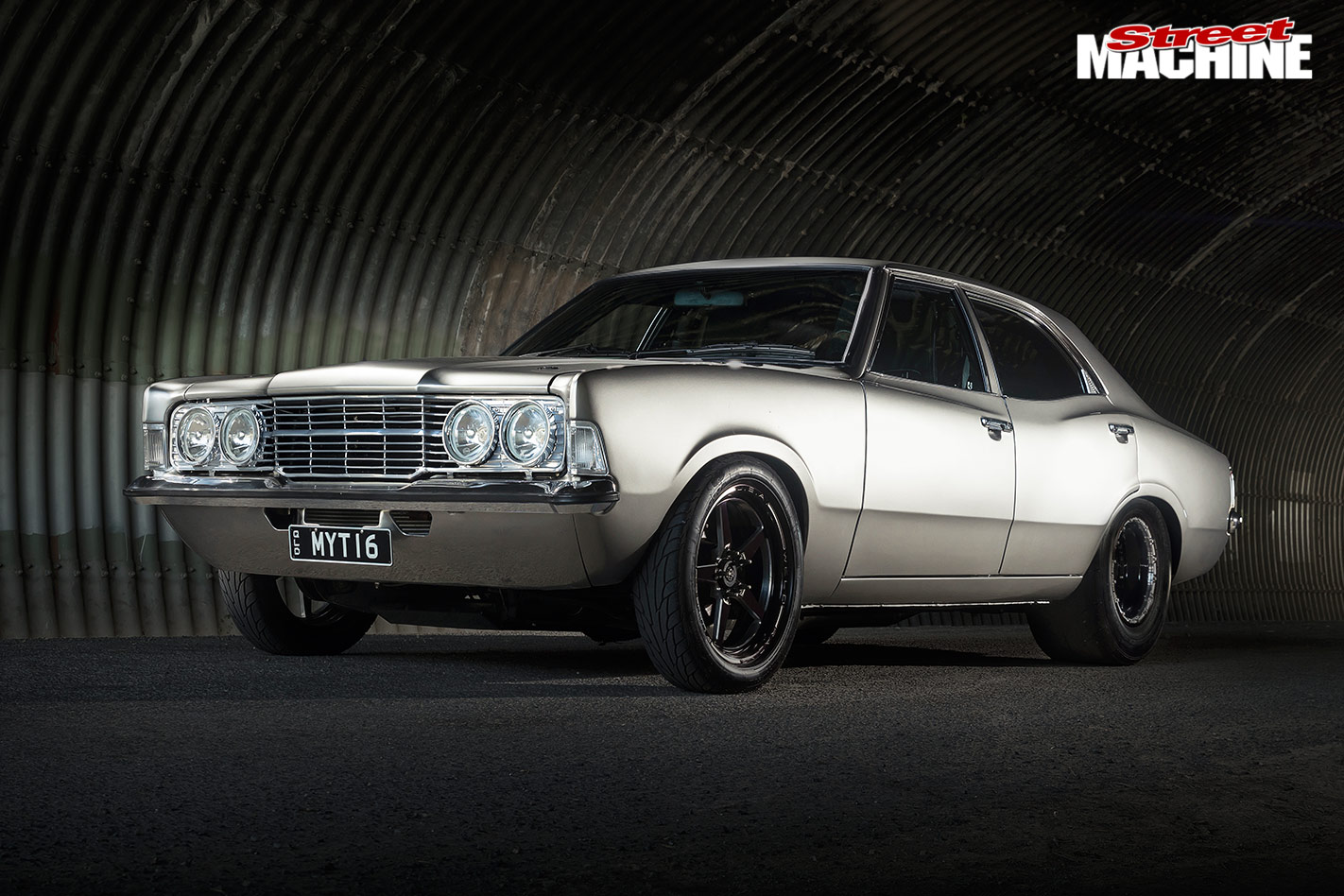 “I put my VL into the wall at Willowbank at 260km/h while it was on its way to its first seven-second pass in street trim,” Goran explains. “It went 8.1@160mph because it went sideways before the finish line.”

While many of us would be broken by such a crazy close call, Goran is made of much sterner stuff and decided to find a smaller, lighter car to jam his monstrous LS into. “After that I fixed the VL and sold it as a roller to my neighbour, as it was the perfect time for me to start building a Cortina. 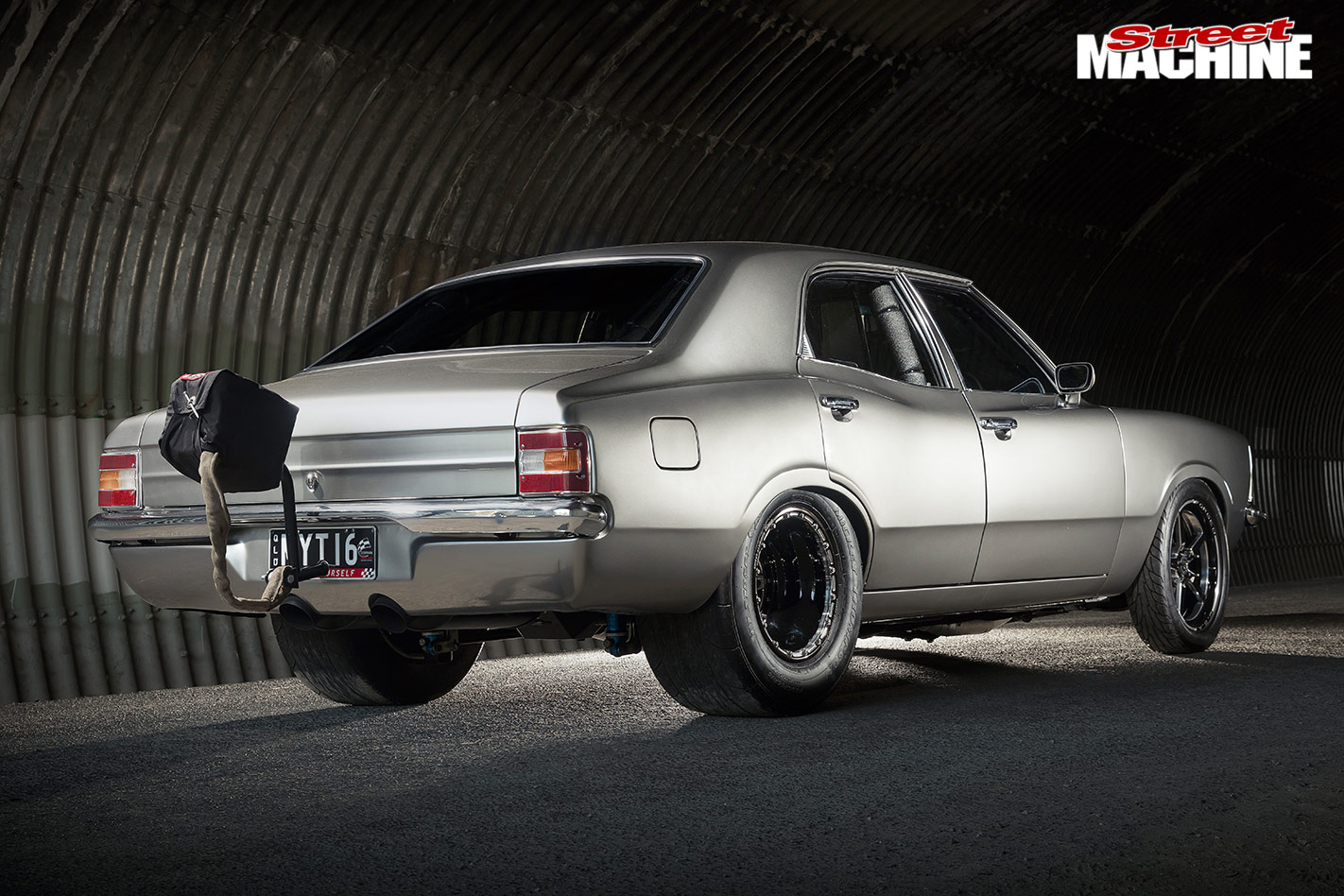 While we see plenty of guys having a go at building cars at home, it’s rare to see someone build a sevensecond car that is as well-detailed as Goran’s Cortina in a home garage. That it is also regularly driven on the street, even doing the school run, just elevates the cool points even higher

“I’d been wanting to do a TD because my first car was a TC Cortina. I bought this TD as it had no rust and was already mod-plated for the turbo, V8 and ’cage before the laws changed in Queensland.

“I had actually been trying to swap a big V-twin bike for this car about six years back, but it didn’t go through,” he continues. “Then just over a year ago I saw a guy trying to sell some billet wheels that were on the car on Facebook. I messaged him and persuaded him to sell me the car as a shell with glass.” 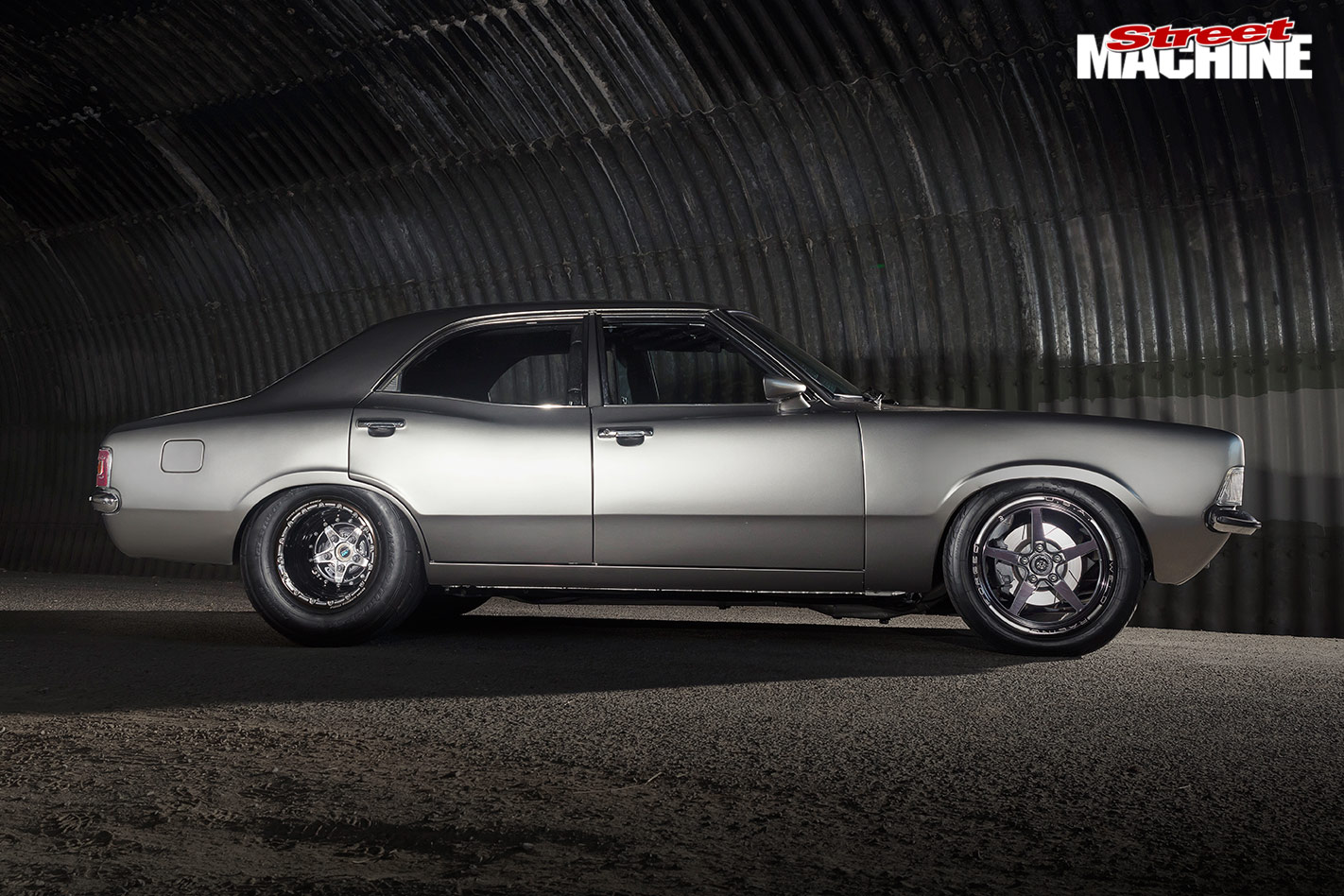 Built between 1970 and 1976, the third-generation Ford Cortinas’s swoopy Coke-bottle hips get ridiculously tough when combined with mini-tubs and fat drag-spec rubber, like what’s found on this silver bullet. Along with shaving over 135kg of tare weight over Goran’s former VL Commodore, the Cortina is 83mm shorter in the wheelbase, 20mm narrower and 505mm shorter overall

While the TD wasn’t riddled with rot, that didn’t mean it was ready to be rolled straight into the booth and coated in the luscious Lexus Atomic Silver it wears today. Instead, Mick from MPP and the boys at Full Throttle Customs had their work cut out for them getting everything into the compact-sized sedan. 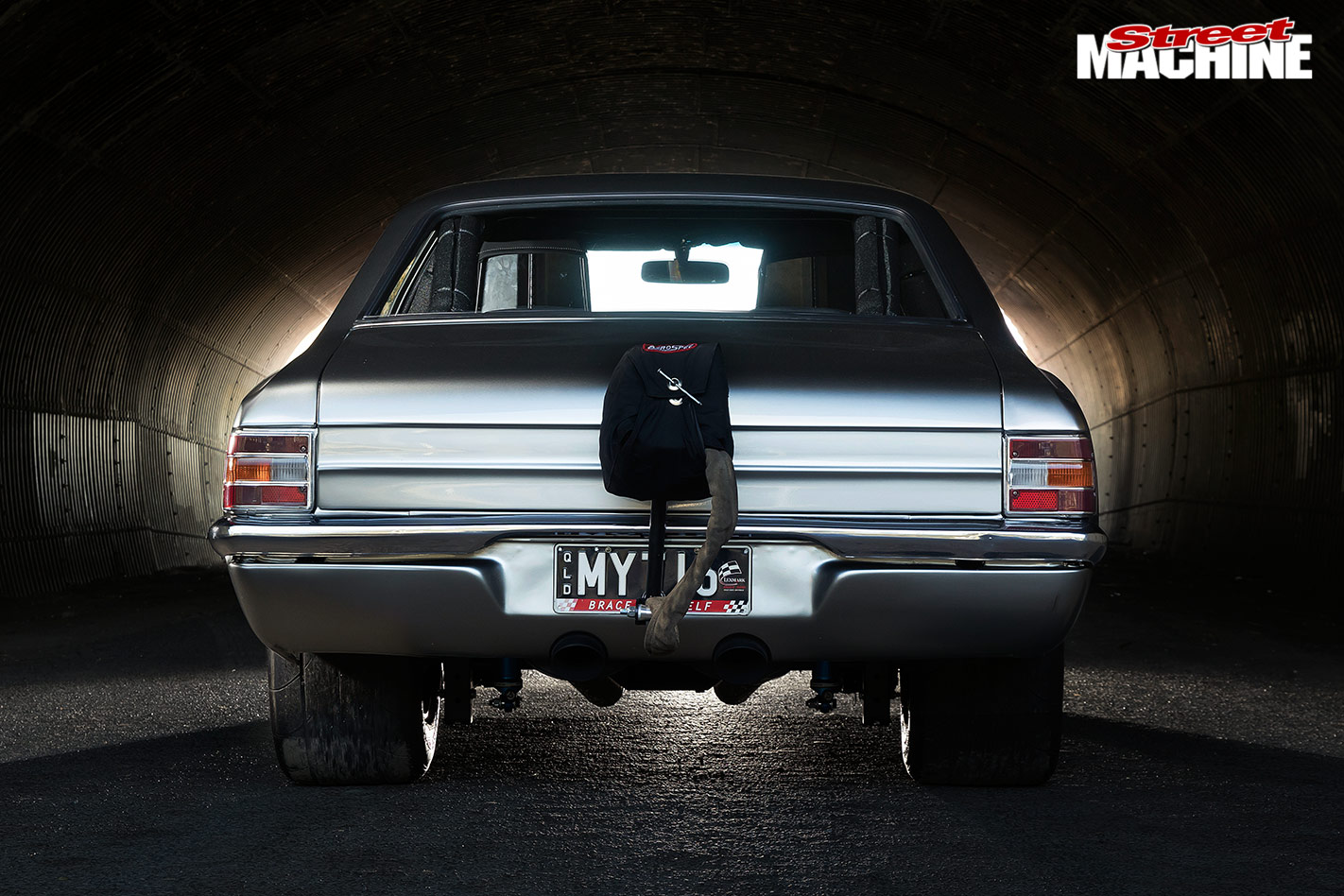 “There was so much fab work!” Goran says. “The firewall was cut out and recessed four inches just to try to get the engine in, but there was just no room for an intercooler. I ended up putting a couple of injectors in the charge pipe to try and cool it down using E85.” 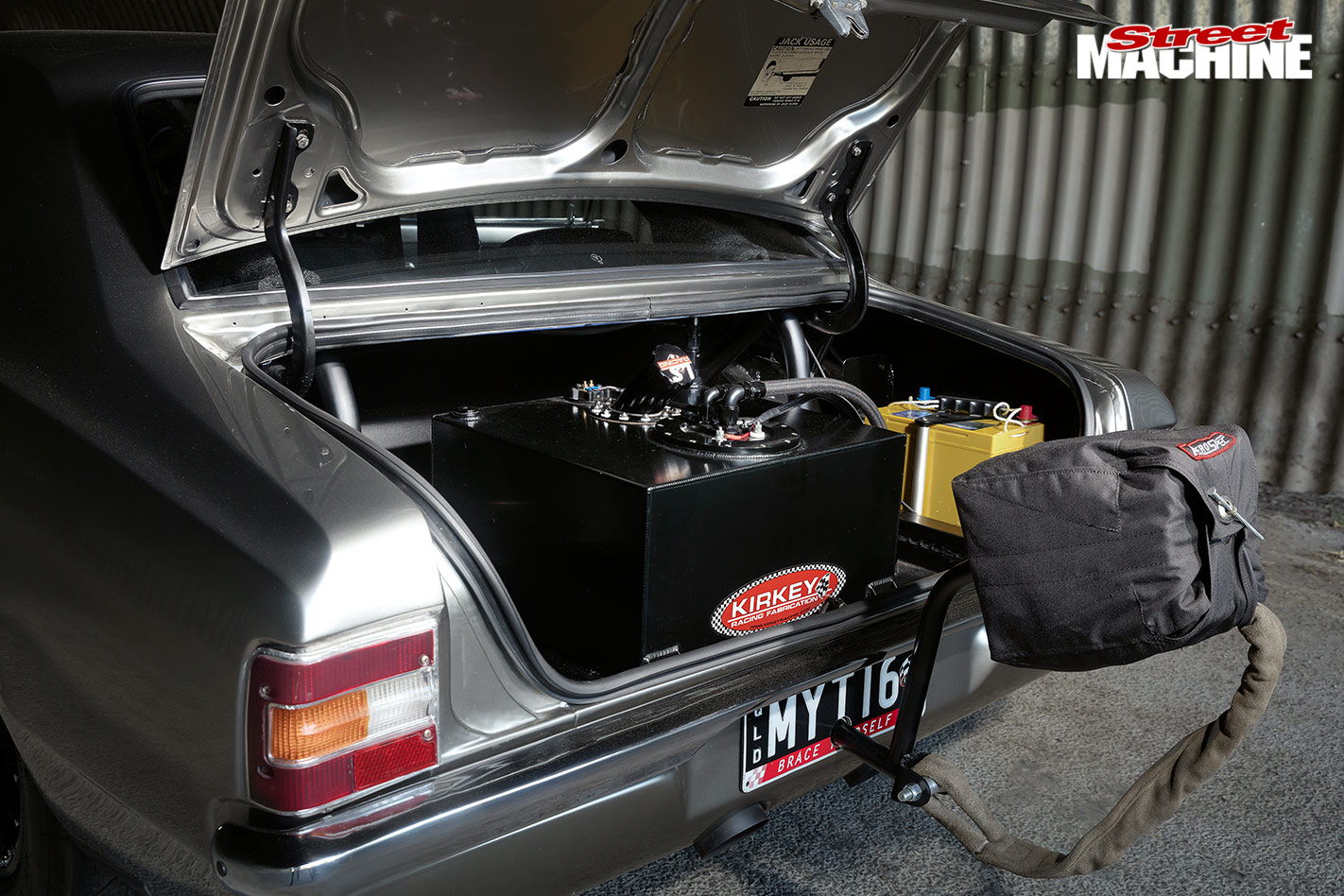 Goran’s combo changed partly to keep it reliable, which is a huge priority for him. “It has to be reliable and easy to service, which is why I will go for an air-to-air intercooler, as I don’t want to have to deal with ice boxes and the like. We even have engine protection on the Haltech software, so I can see if the car is losing coolant or lifting a head”

The fab work continued inside and included a new transmission tunnel and a tubbed rear end housing a sheet-metal nine-inch diff from Competition Engineering. Thanks to that metalwork under the rear, Goran can now fit a 325/60/15 Mickey Thompson tyre on the back, which he’ll need when he turns the combo up. 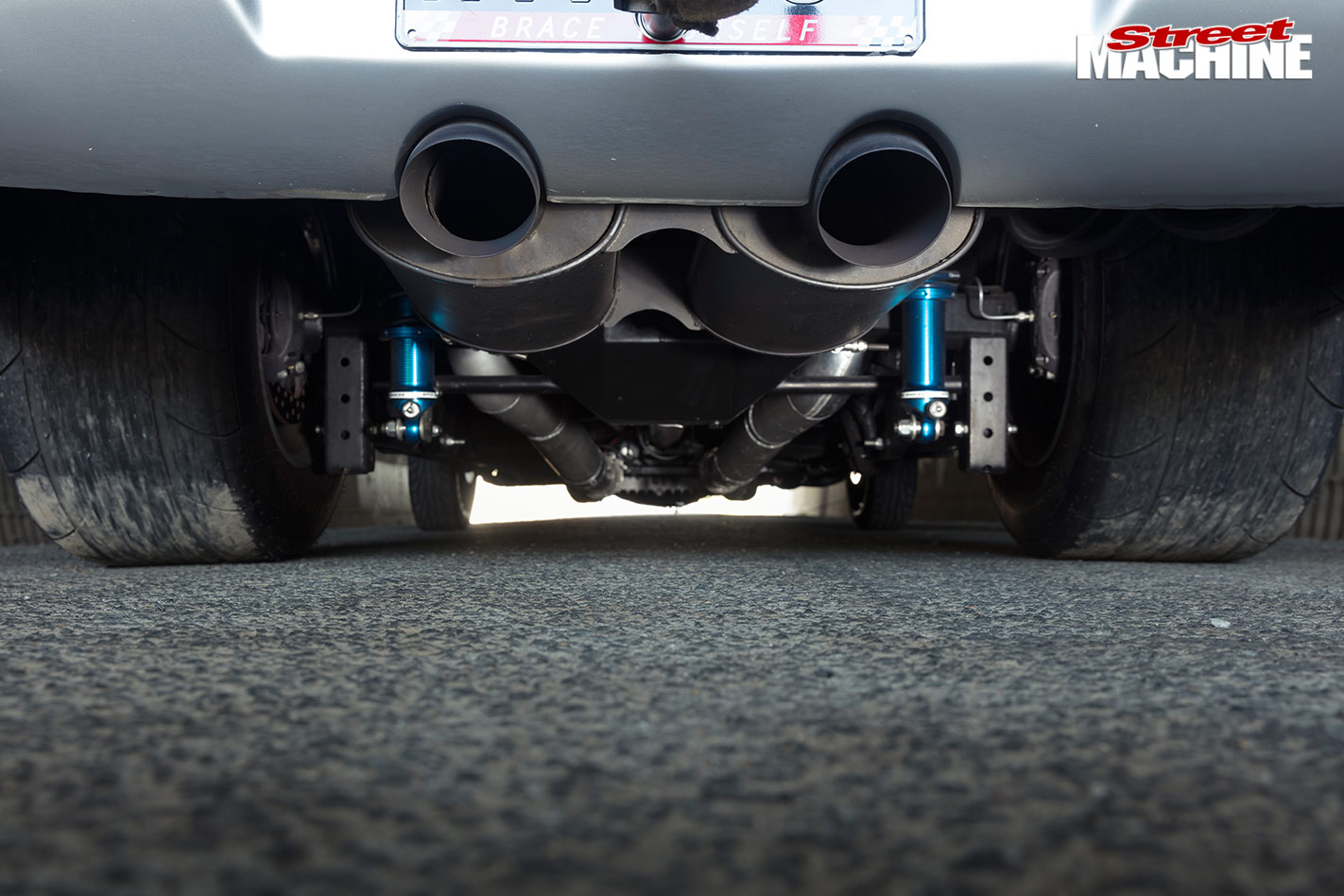 While the stock TD steering and coil springs remain up front, the new rear end meant changing to a four-link set-up with AFCO adjustable coil-over shocks. Goran also upgraded the brakes to BA Falcon units up front, with Wilwood discs going onto the rear, along with a Wilwood master cylinder to operate the system.

Up front Goran kept the six-litre LS2 from his VL, packed with Callies Compstar rods running on ACL bearings and a Spool crank, pushing JE pistons and Pro Seal rings. This time, however, the slugs are compressing the air and fuel in deep-breathing AFR 230cc cylinder heads, rather than the stock castings he had on the VL. 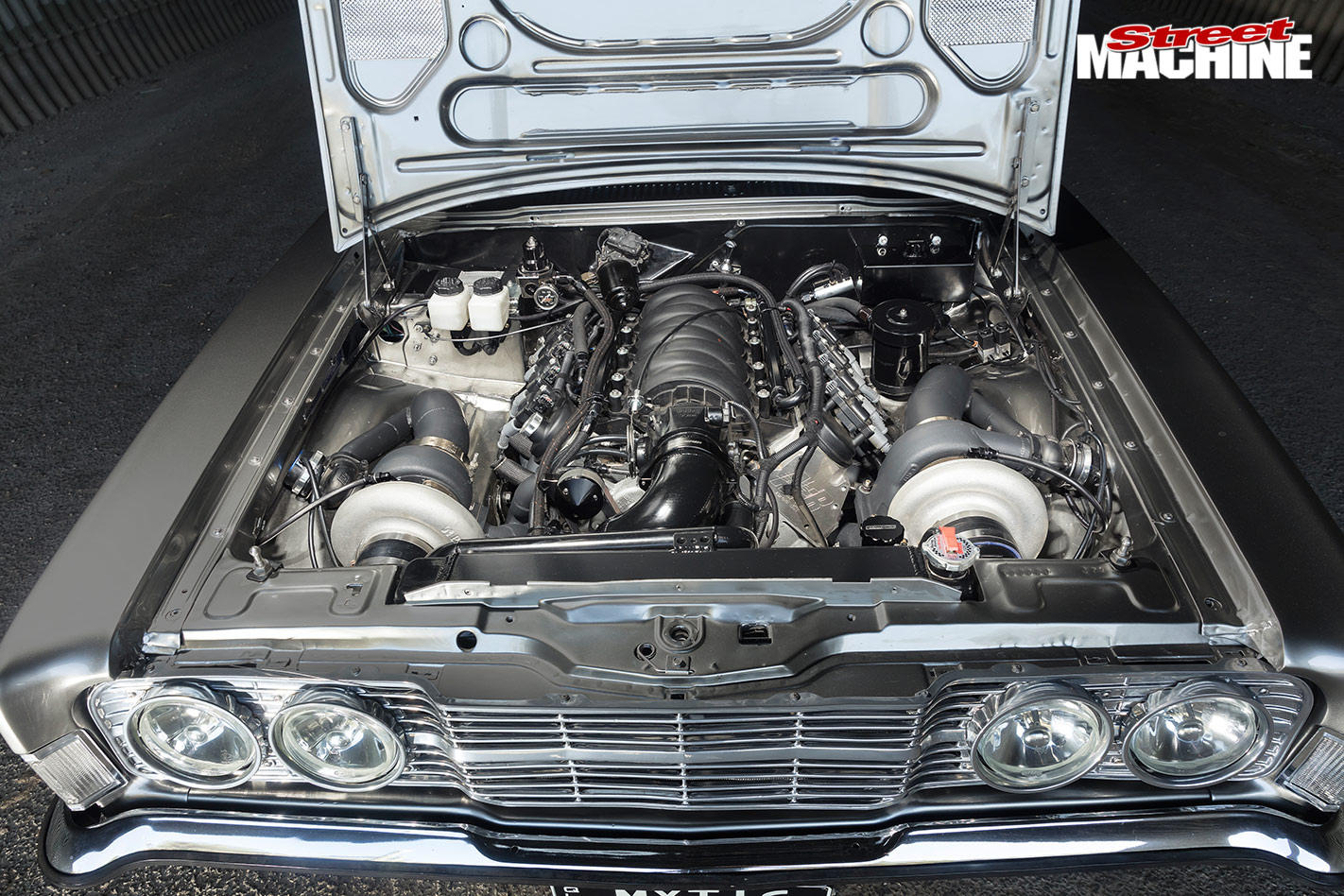 A 239/243 cam, Brian Tooley valve springs, Morel tie-bar lifters and Trend pushrods round out the major valvetrain mods, with the real heavy lifting on the power front handled by a pair of BorgWarner SXE66 turbochargers, equipped with 40mm wastegates. This is a big step away from previous combos, as Goran explains.

“I have always had single turbos, but this time I went with twin turbos. They should make about 900hp each, but we haven’t pushed them yet. This engine previously made 1226hp at the wheels, through stock heads and a single GTX Garrett turbo, so this should go mid-sevens in street trim. 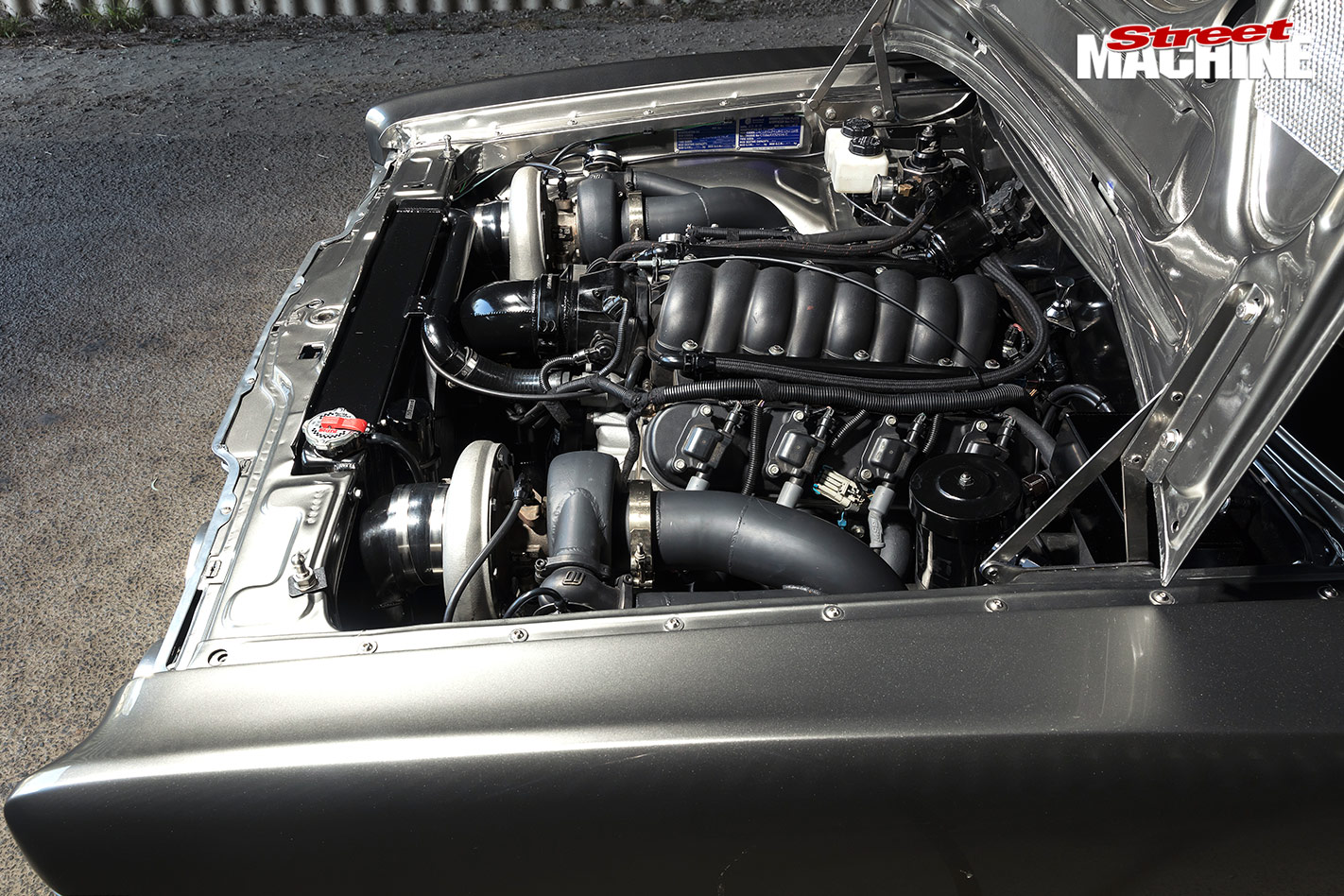 Going to twin huffers meant Goran had to look at the exhaust he was going to run. “Another change is the VL had cast manifolds, but I’ve gone to steampipe headers to assist the power delivery,” he says. “The wastegates are only 40mm but they’re welded onto the housing to help boost”

“What I really wanted to do with the twin turbos was make the same amount of power as the single-turbo set-up but on less boost, and I wanted better power delivery. The lack of strut towers in the Cortina made it a bit easier to fit the twins, too.”

A Moroso oil pump and modified Moroso sump provide the LS’s lifeblood, while a trio of Walbro 460 pumps supply the E85 to the 2200cc Bosch injectors sitting on the engine, and a Haltech PS2000 ECU keeps it all under control. To help keep it cool an AFCO dual-pass radiator lives up front, and Goran reckons it works well as the Cortina is a real peach on the open roads. 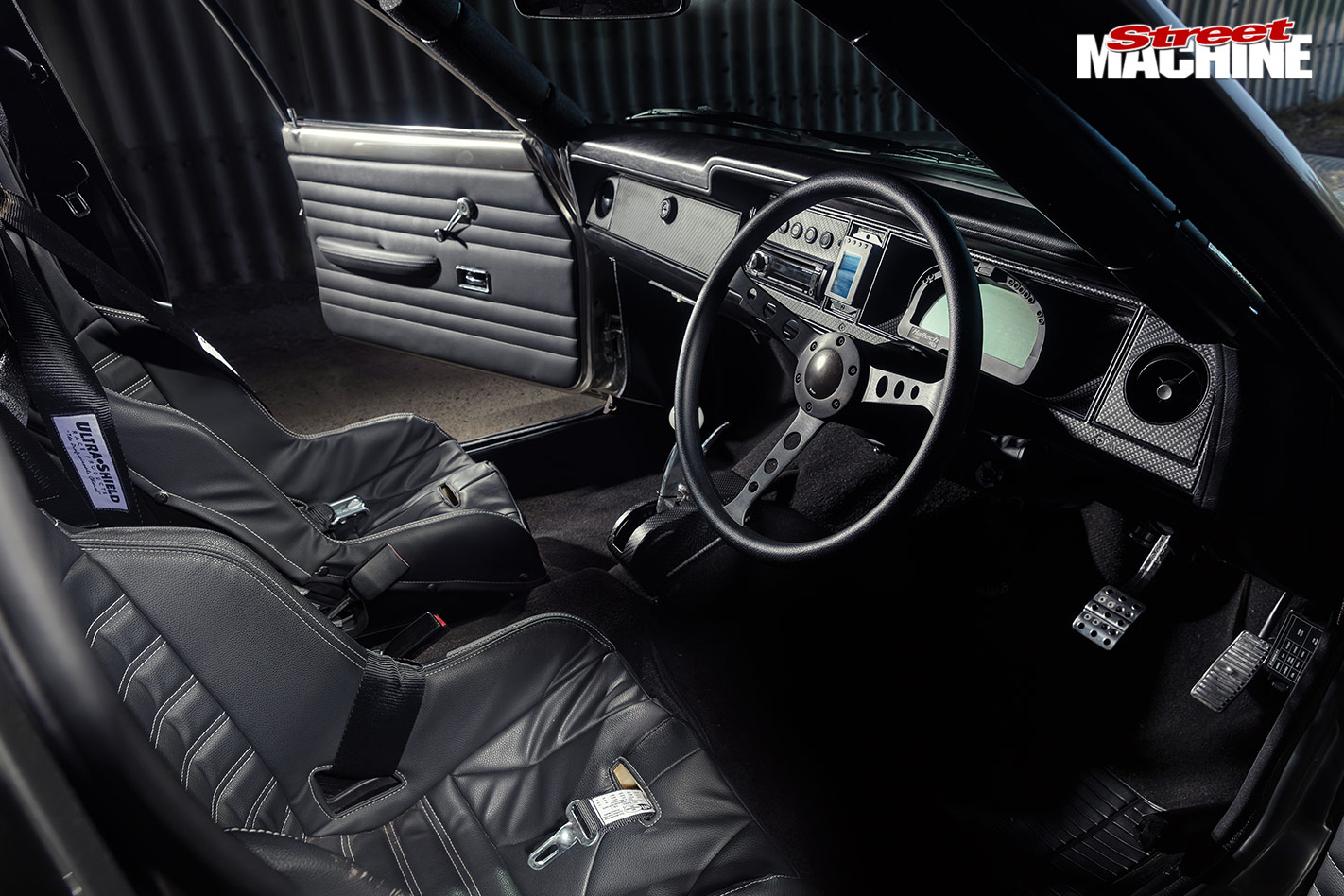 Given the performance potential, Goran wisely opted for Kirkey seats, harnesses, and a sixpoint ’moly ’cage, with the black vinyl trim handled by Pro Seat. A B&M Pro Stick has the job of banging the two forward gears, while a Haltech IQ3 Racepak dash provides all the information Goran needs

“It drives awesome on the street,” he says. “I saved about 300lb going to the Cortina and, interestingly, I’ve never had problems with oil temperature or needed an oil cooler.

“On only 14psi it made 675hp, and the first meet it went 9.0@149mph. The next step is to pull the charge pipe out, go to a thinner radiator and try to fit a slim air-to-air intercooler because the injectors in the charge pipe don’t cool the air enough. 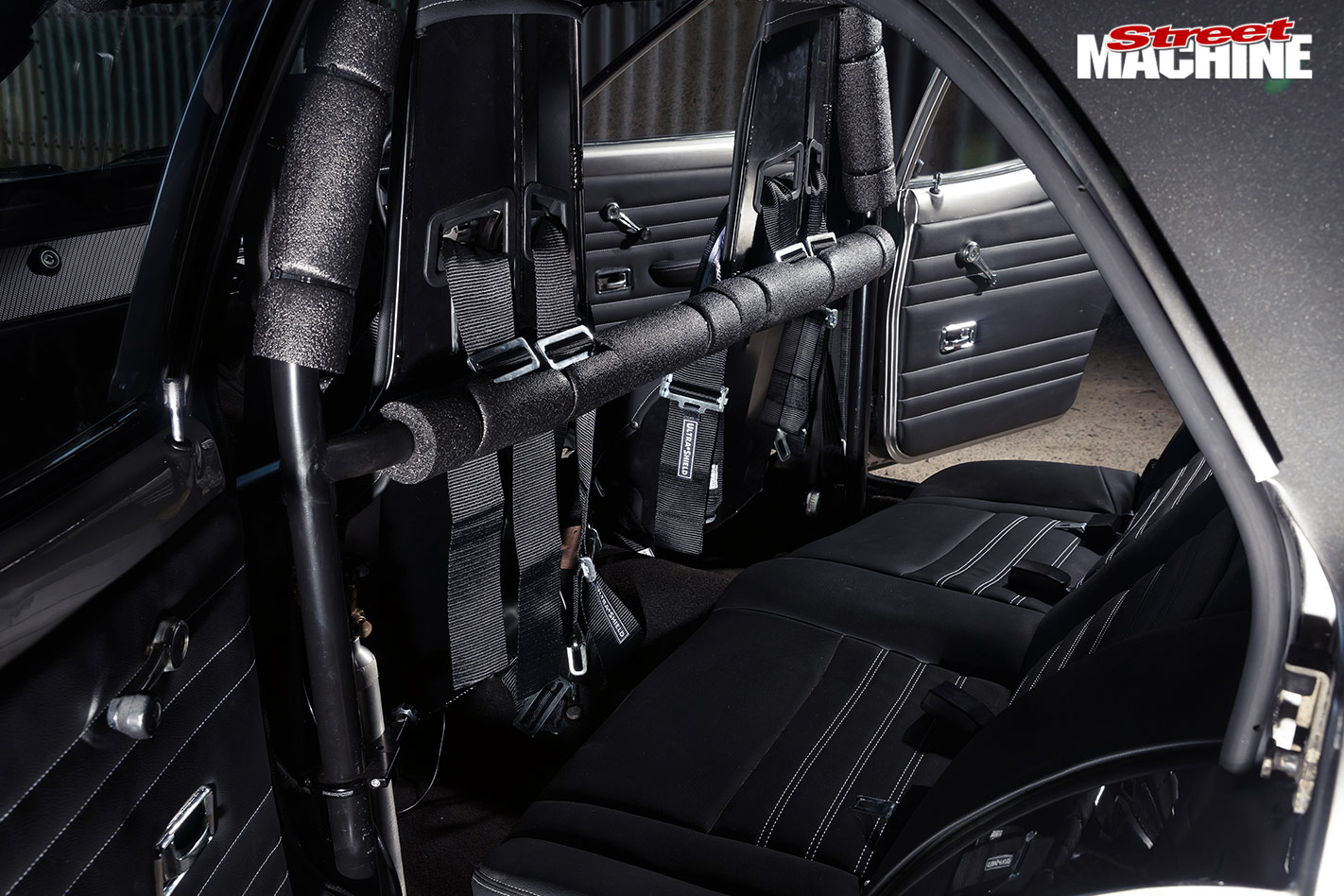 “I’d like to run it up to 20psi, but I might even aim it up a bit more; if it takes 22psi or 23psi to run a mid-seven then I’ll do it. The aftermarket heads have thicker decks so they shouldn’t lift under boost.”

Behind the angry cathedral-port LS is a PTC converter and a serious two-speed Powerglide, packed with billet internals, a transbrake and bump-box. Obviously Goran had a nuclear-tough four-inch tailshaft custom made, wearing 1350 yokes to handle the shock loading. 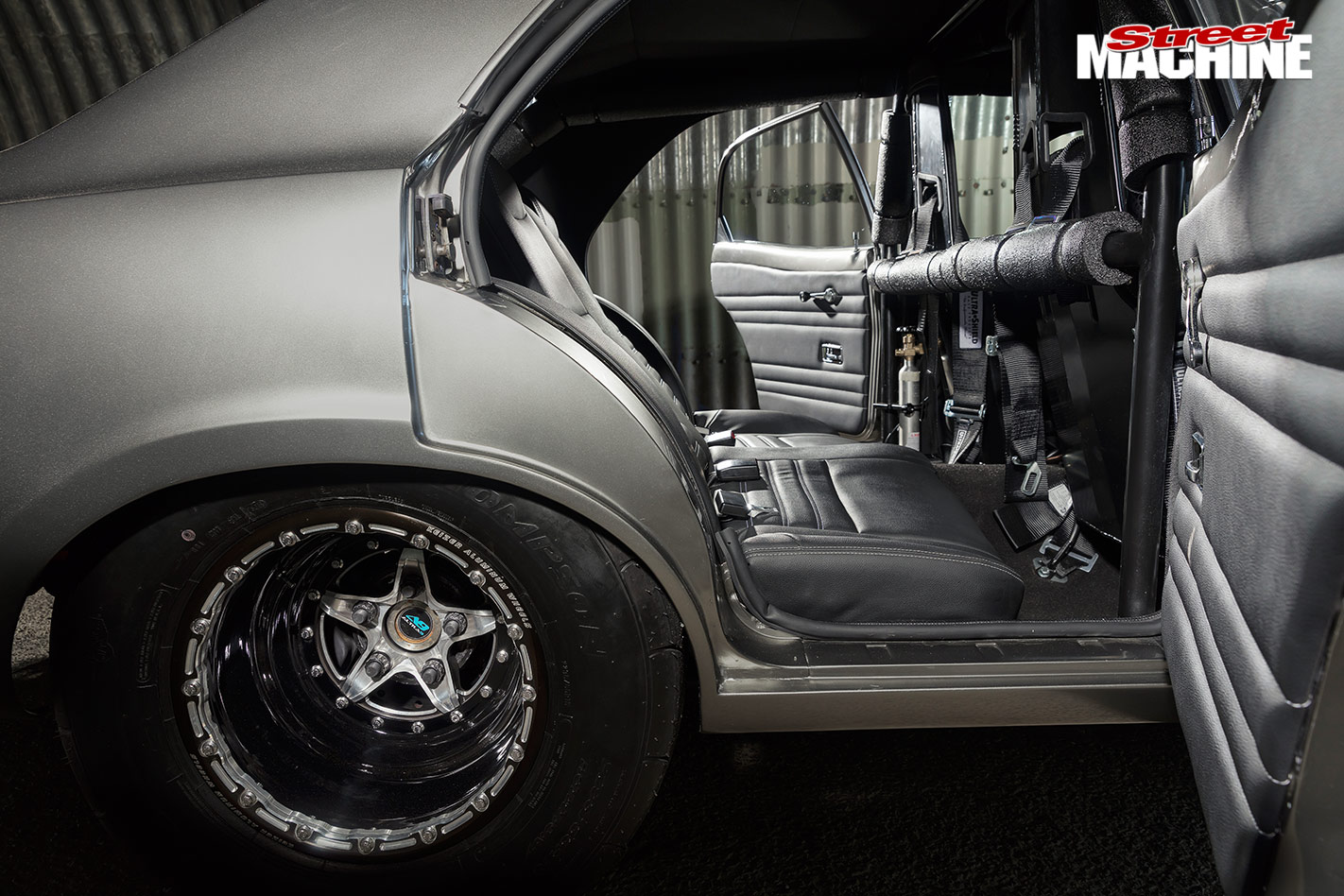 Weld beadlock 15x10s ride out back, with cheese-cutter 17in front-runners at the steering end. Lightweight and able to handle the stresses of over 1000rwhp launching off the line, the Weld five-spokes have become today’s equivalent of the 1980s’ Center Line Auto Drags for tough street cars

While he’s still sorting the charge-air cooling and finishing the combo off, Goran is really looking forward to getting back to the track to gun for that mid-seven pass. “It should go well into the sevens, which is what I want out of it.”

But doesn’t that crash in the VL play on his mind? “I have a big focus on safety this time,” Goran laughs. 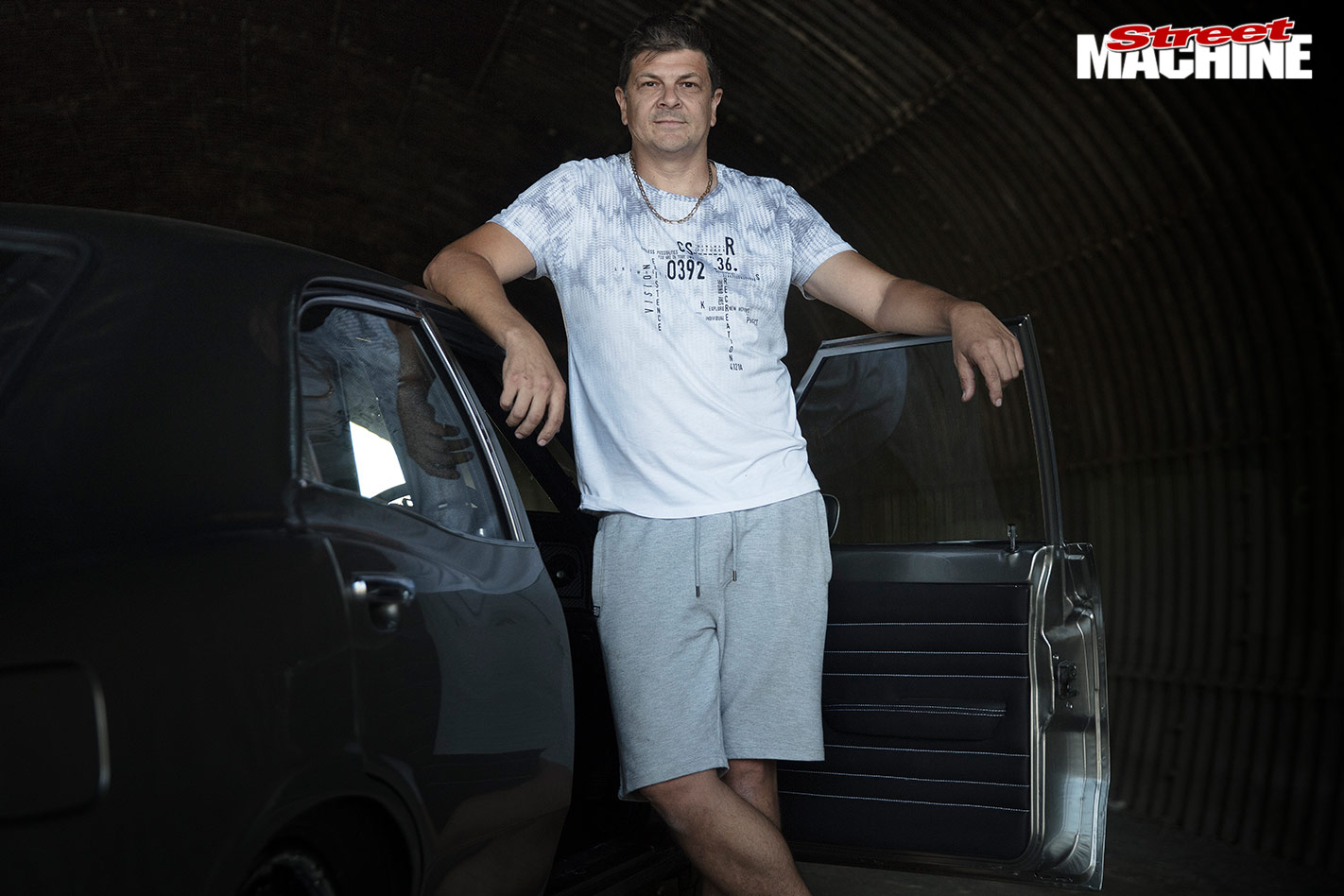 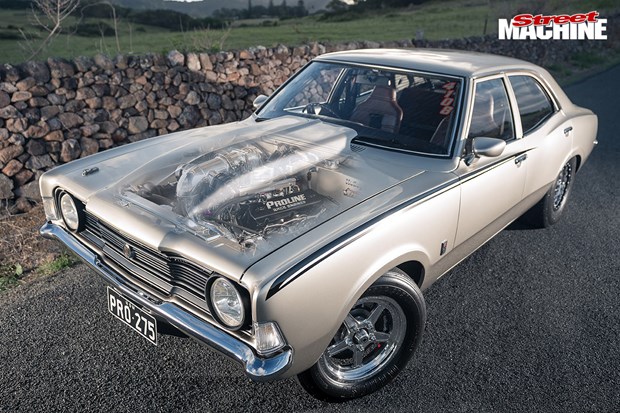 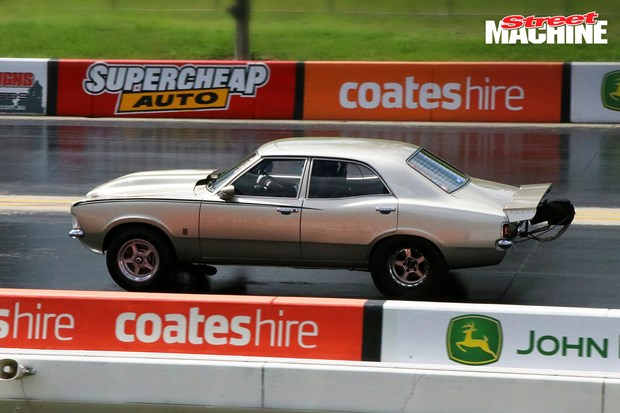 Street-driven ProLine-powered Ford Cortina has run 7.50 down the quarter-mile 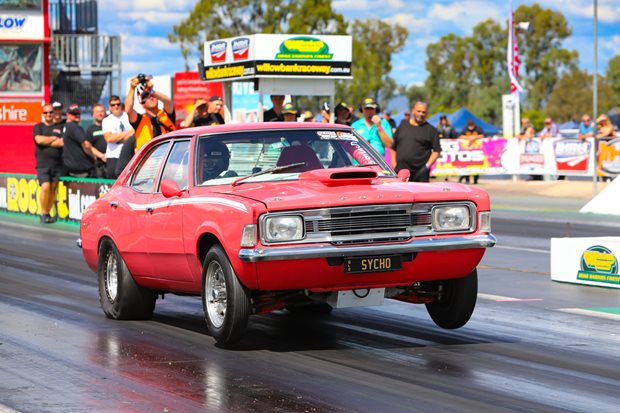