The G-Pak Holden Torana was the poor cousin of the SL/R, but with a 620hp LS7 under the bonnet, Matthew Klauss's retrotech beast has hit the steroids pretty hard

I DON’T want a bloody G-Pak!” That’s what Matthew Klauss said when his buddy told him of a mint low-kilometre example for sale. Like any self-respecting Aussie, Matt grew up lusting after home-grown Bathurst hero cars, specifically the ones with big flares, bulging rubber, bent eights and ‘SL/R 5000’ boldly plastered down the side.

5
The Torana G-Pak was released in early '75 as a poverty pack-based sporty special with bucket seats, centre console and SL/R-inspired instrumentation - and was available in three colour combos including Absinth Yellow with Tuxedo Black stripes

“I wasn’t interested but he kept at me to come and have a look at it. Eventually I caved, and when I did I found this gorgeous little car in awesome condition with only 15,000km on the clock and not a hint of rust in it. It’d been sitting under a cover in a shed for years, and I knew it was the shell I’d been waiting for.”

Rust-free Torries are a rarity these days so Matt snapped it up. But while the temptation to build an SL/R mock-up was always there, the G-Pak theme grew on him as the weeks wore on and soon enough he made the decision to embrace it fully. 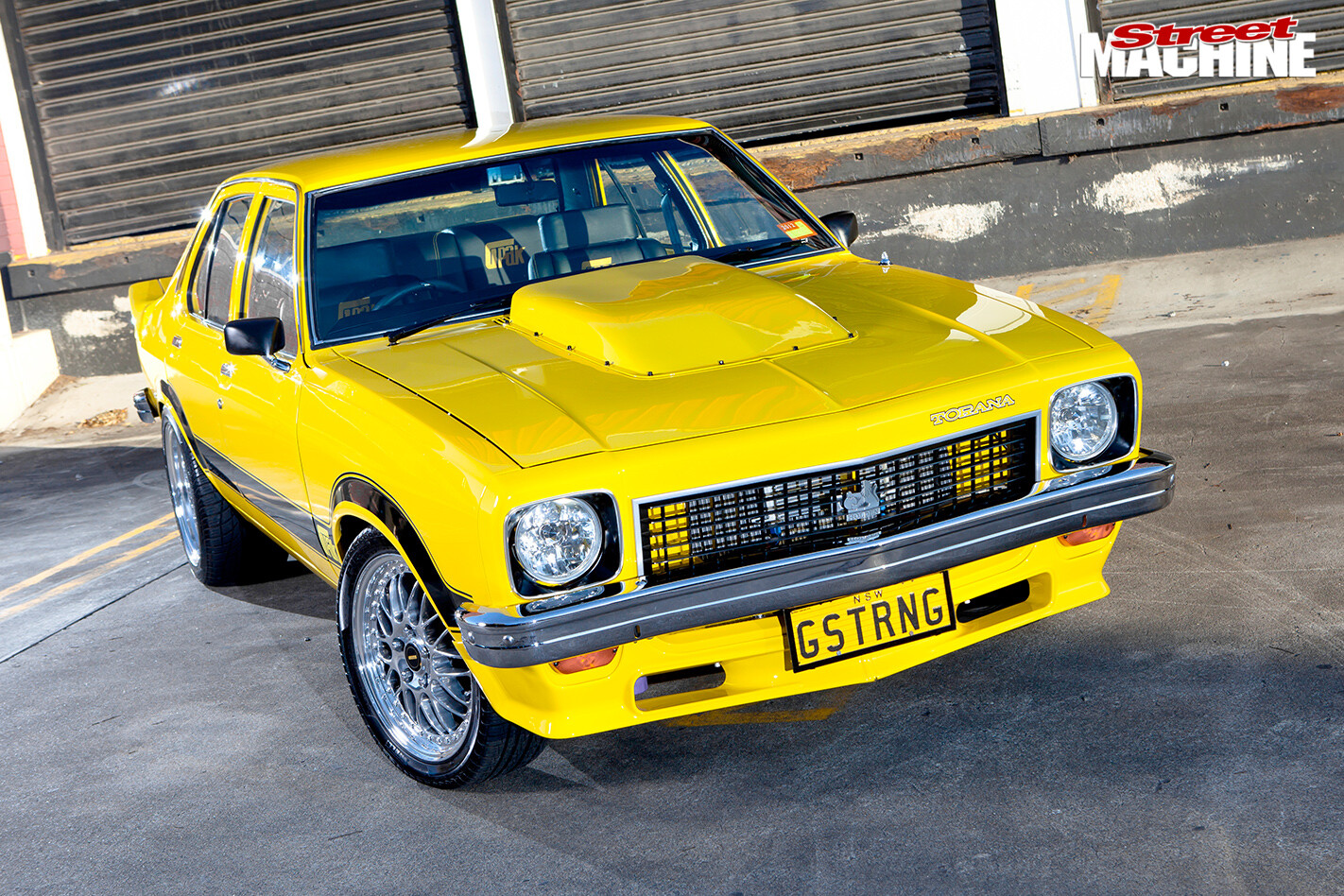 The shell was stripped and restored to its former glory, refinished in retina-searing Absinth Yellow duco with loud-and-proud G-Pak livery. One thing Matt wasn’t prepared to compromise on was the width of his rear boots so mini-tubs were added to achieve a fat-tyred stance without flaring the guards.

After running it around for a while with a triple-carbed 202, Matt slotted in his engine of choice — a cantankerous 355ci stroker Holden with dash-nine heads, four-bolt mains, Harrop single-plane manifold and more than 500hp. 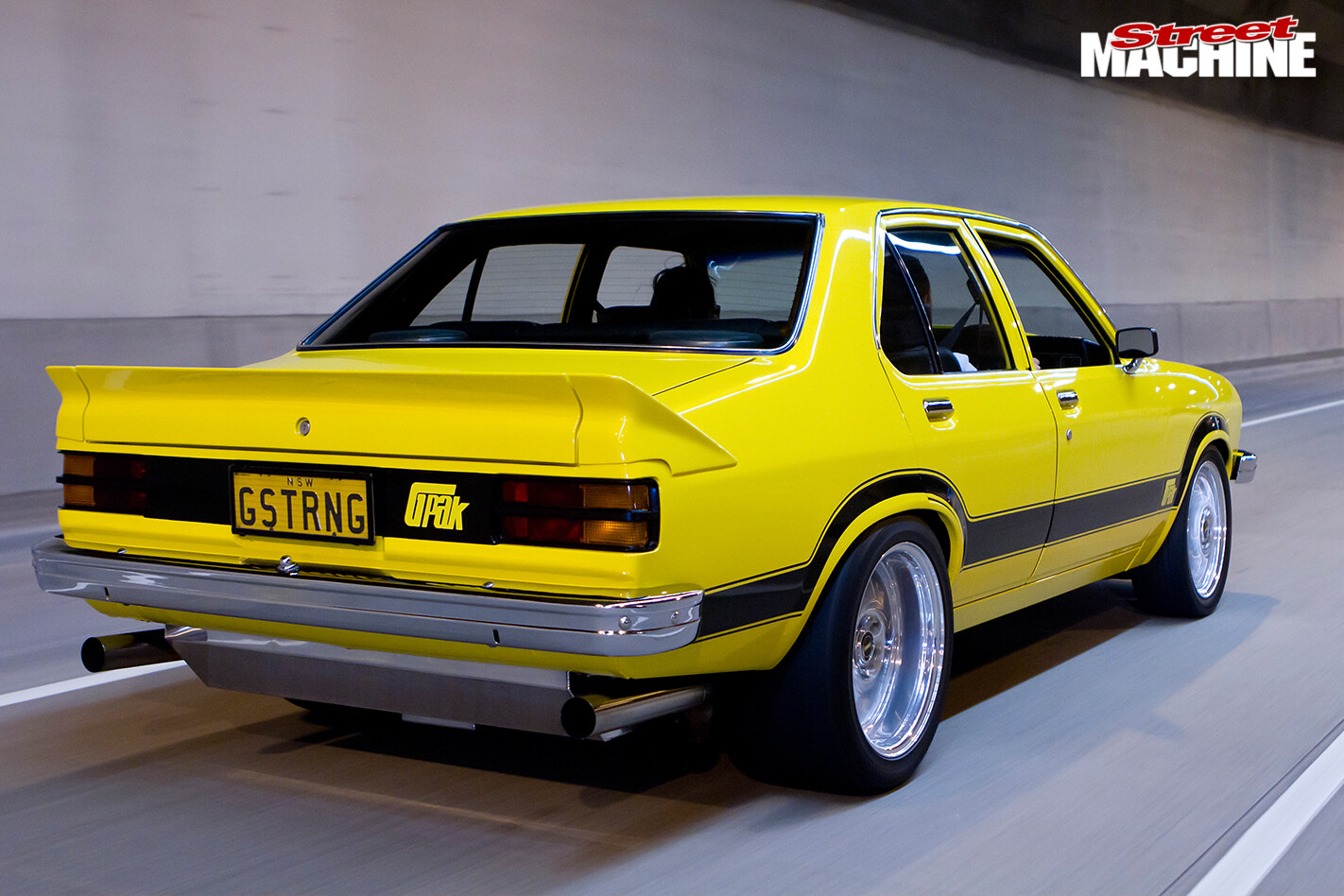 “It was a really staunch little motor and the car ran a one-off 10.30 before getting booted off the track but it was a pig to drive on the street and it only lasted six months before carking it in spectacular fashion on the dyno at Kandos,” Matt says.

After burning up a wad of cash on a highly strung donk that couldn’t go the distance, he was faced with the age-old conundrum of how to get improved reliability and driveability without compromising on performance. The answer was a hefty dose of modern muscle. Not to mention a heap more cubes.

Chevrolet’s 427ci LS7 small-block is a killer engine, worth more than 500hp straight from the box. After a thorough fettling by Sydney LS gurus Sam’s Performance, Matt’s LS7 ain’t box-stock and it’s good for a whopping 620hp at the crank. It packs a Fast LSXR inlet manifold, Comp Cams 242/248 stick and Manley oversized valves aiding breathing while a Compstar crank and rods and Diamond forged pistons ensure reliability in the rotating assembly, but components such as the lifters, pushrods, valve springs, oil pump and injectors all remain standard. Many of these parts are the first to go when modifying a lesser LS-series engine, which goes to show just how serious a performance proposition the LS7 really is.

5
Luggage compartment accommodates the tail end of a pretty comprehensive stereo - 12in MTX subs, 6in MTX splits and a pair of Sony monitors

A serious engine needs a serious transmission but there’s not a Powerglide or Turbo 400 in sight.

“I’ve always preferred driving a manual. My first car was a Group 3 Brocky, and ever since then I’ve been into manual V8s. I like to feel like I’m driving the thing and I like being able to drop the clutch and send it up the road!” So Matt opted for a Tremec TKO 600 five-speed, which is capable of tolerating the gobs of torque that the big 427 sends south while still allowing him to change gears when he pleases.

5
Cabin is refurbished except for the dash and headlining, which were in perfect condition despite their 36 years. There are Scheel buckets, a Hurst shifter and MOMO twirler, while the Auto Meter gauges have a custom console

“It was a big expense, going for a manual, and it needed a custom pedal box, crossmember and floor pan. Mal Wood built a single-plate clutch which could take the grunt, so it’s smooth and easy to drive.”

Out back there’s a 31-spline 9in with a 3.9:1 Strange centre. It’s suspended by Strange coil-overs which aid in the traction stakes but GSTRNG still has no issues turning its 275/40/17 Pirelli hoops. “You can pretty much put the foot down in any gear and it’ll light the tyres up. The arse end is set up really well so it squats and the tyres hook up at first, but as it builds revs it bakes them. You can just smack it through the gears — it’s a lot of fun to drive!” Having recently relocated to sunny Queensland and with the engine woes behind him, Matt’s keen to get out and soak up some sun in a car that now happily combines reliability with tyre-trashing grunt.

“It’s been both a blessing and a curse because it seems like there’s always been something to stop me driving and enjoying it. I hope this is about the last change to the car as I have a fresh start with a fresh slate and I’m looking forward to racking up some miles. But it’s become a member of my family so no matter what it does to mess with me mentally and financially, I just fix the problem and move on.” As for quarter-mile times, they’re no longer a priority. “The LS7 makes 120hp over the old engine. Sam’s reckons it should run a nine if it hooks up but I don’t want to put a ’cage in it.

“The old engine was really grumpy but now it’s much easier to drive and has a heap more grunt. It’s smooth as silk in the driveline and it doesn’t fuel up in traffic — it just sits there and idles away. It’s really reliable horsepower and has a huge amount of torque. Everything’s under the bonnet, and it’s all engineered and legal.”