Mark Drew has had a list of fast Toranas, here's a look back at his eight-second 622-cube monster from seven years ago

PRO Street racing has gone crazy over the past couple of years. New blood and frequent race meetings have delivered a swag of fresh rides. While Mark Drew isn’t exactly new to the scene, he decided the time was right to upgrade from his blisteringly fast LC coupe to something really impressive.

We gave you a sneak peek at his new LH Torana in February ’11 while it was still in the build. At the time he was planning a twin-turbo small-block that’d run in the seven-second zone, but things changed. 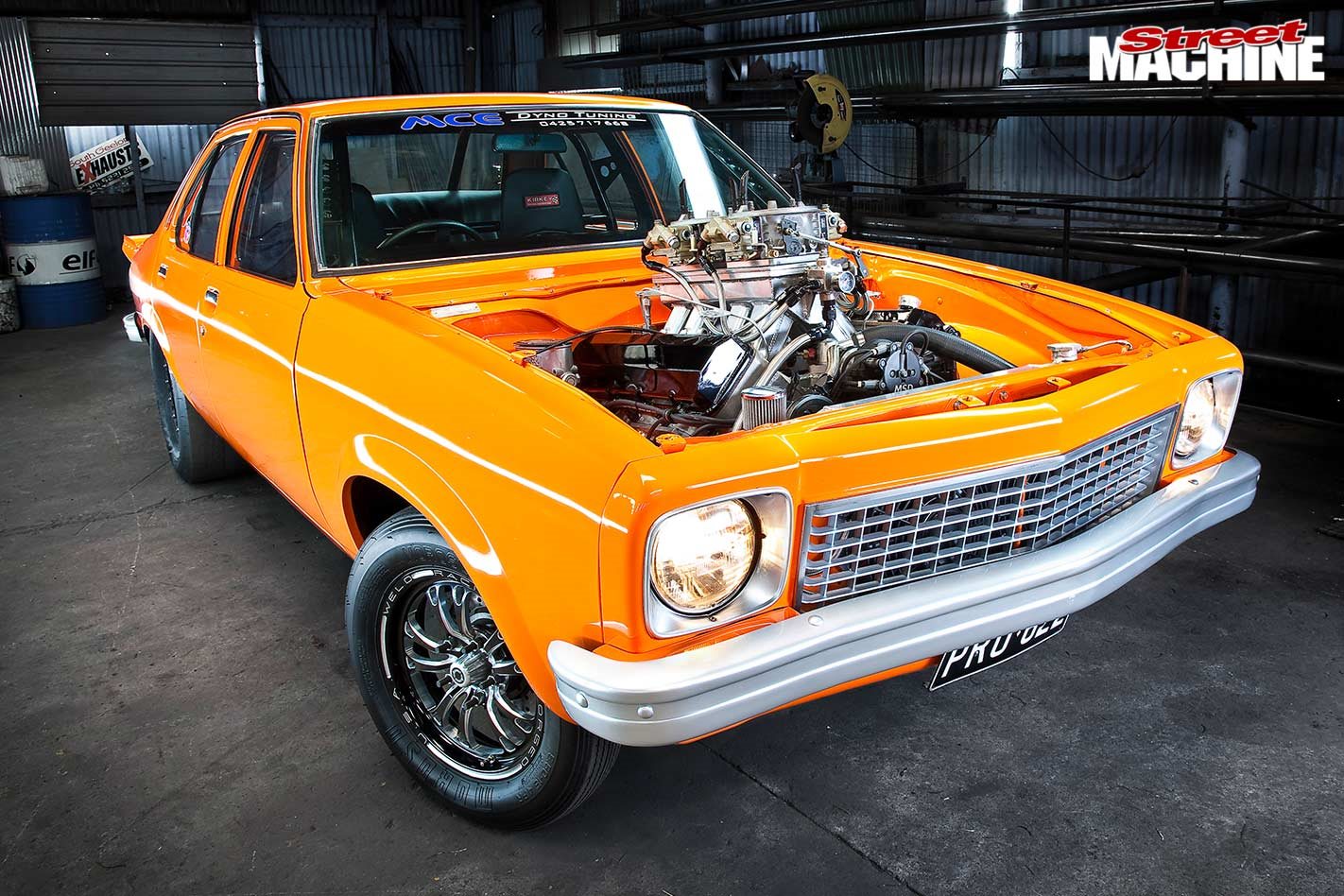 Mark sold the LC because “it was a handful”. The short and narrow nitrous-assisted coupe was a wild ride – good for 8.78 seconds at 155mph.

“The LH is a better working car,” he says. “Better to set up and they tend to go straight.”

After selling the 434-cube early Torana, he started looking around for a decent LH sedan. He didn’t have to look too far as his good mate Mick Brody – who owns a couple of super-quick cars – had the perfect canvas waiting for him. 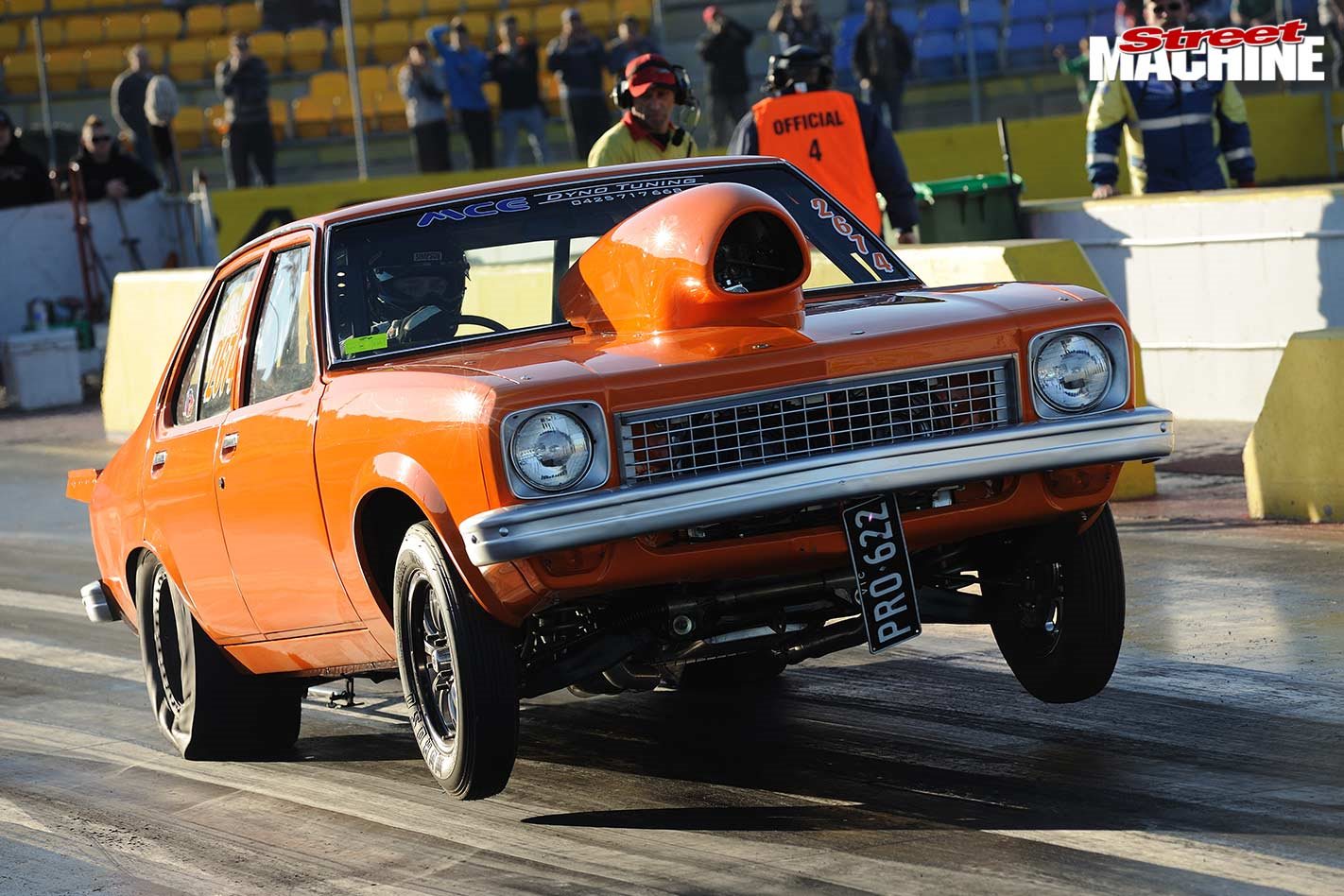 “It was a one-owner thing that Mick bought off one of his customers. I bought it off him. She was all gold with a 173 and three on the tree.”

After dragging the car home to Geelong, Mark sorted some rego and began a street car build that only took five months to complete.

“I’m my own worst enemy,” he explains. “I don’t stop until it’s finished.” 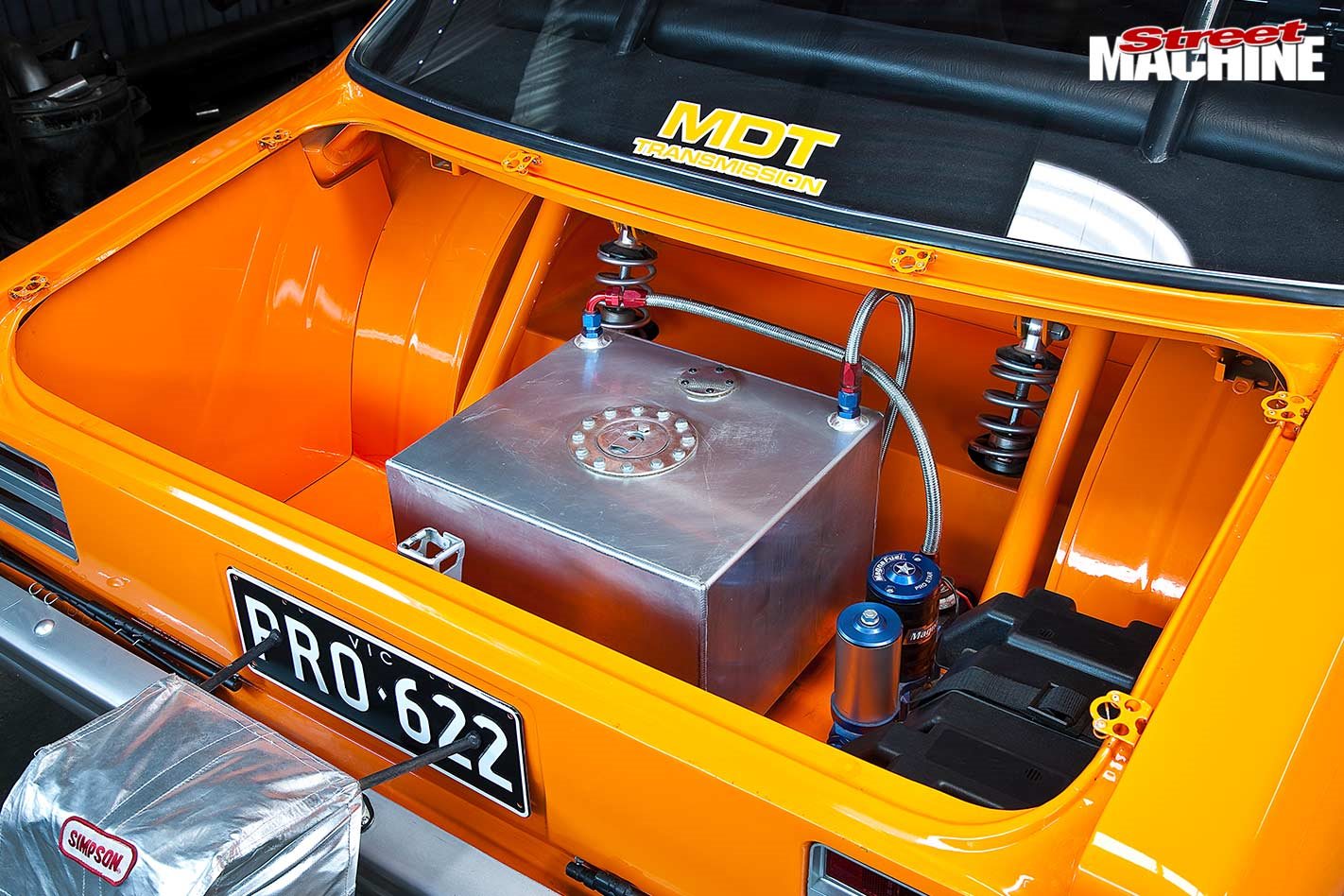 Tubs, rear suspension, rollcage, battery, fuel cell, fuel pump and fuel filter. The parachute has to stay on the outside

With such a short build time, you know everything went smoothly; probably because he did most of it himself. No tales of dodgy body shops or shonky mechanics here. In fact the only problem Mark had was with the spiders.

“Redbacks. It was infested with redbacks. I’m not lying; I must’ve killed 3000 of the bastards. Even after I got it sandblasted, they were still coming out to play.” 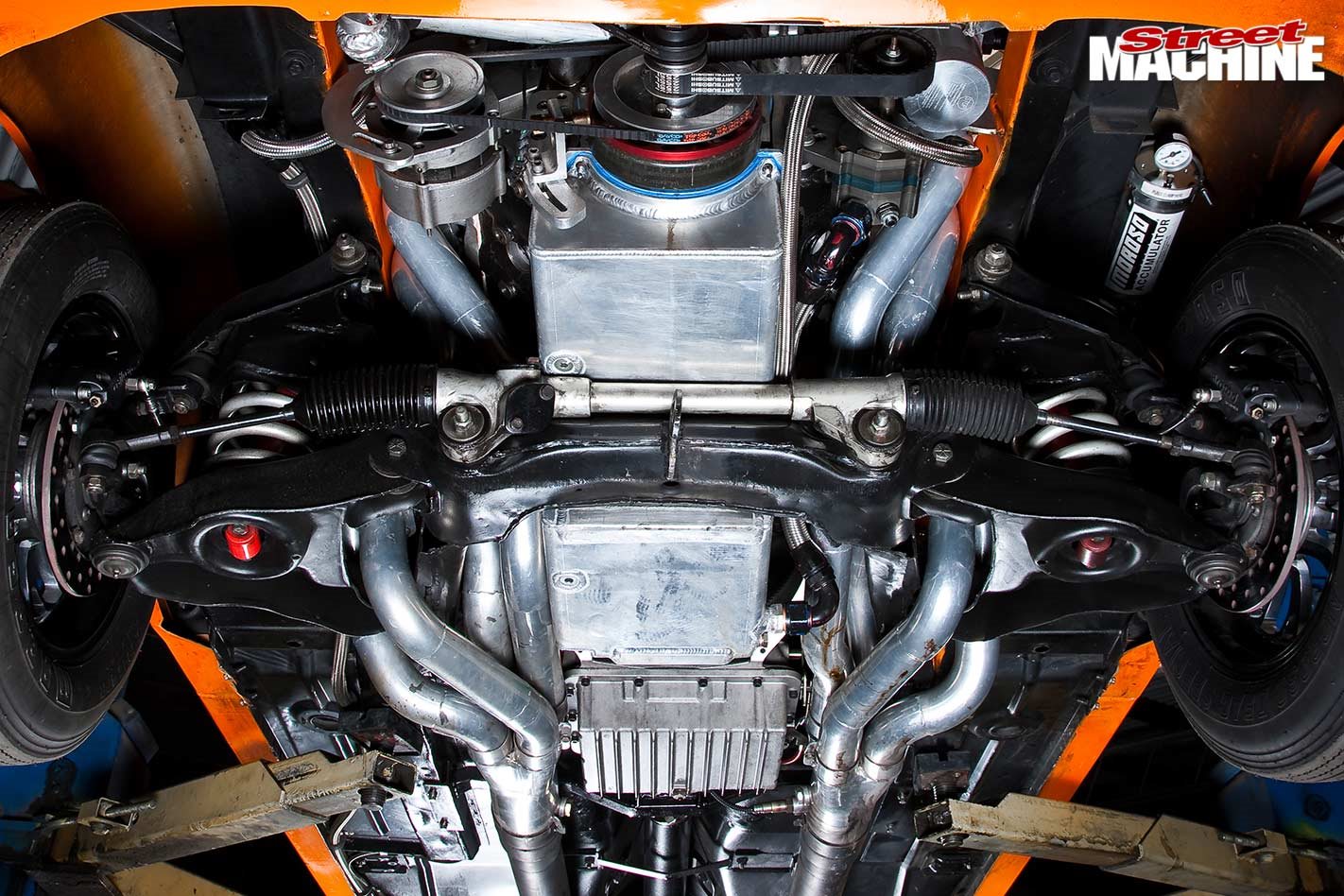 South Geelong Exhaust managed to knit a set of pipes around the 622ci combo, helping it deliver around 1200hp

Mark started at the back. A sheet-metal 9in filled with all the good gear was hung under the tail using adjustable suspension arms mounted from the factory locations, with coil-overs to keep it off the deck. His plan was to play in Modified Street, so cutting the whole rear out and stitching in a custom four-link clip wasn’t allowed.

After getting the shell back from the blasters he started smoothing the panels and getting the fibreglass front clip right. To cut weight he went with ’glass guards, bonnet, boot, bumpers and dash then put most of the savings back in the form of a 10-point rollcage. 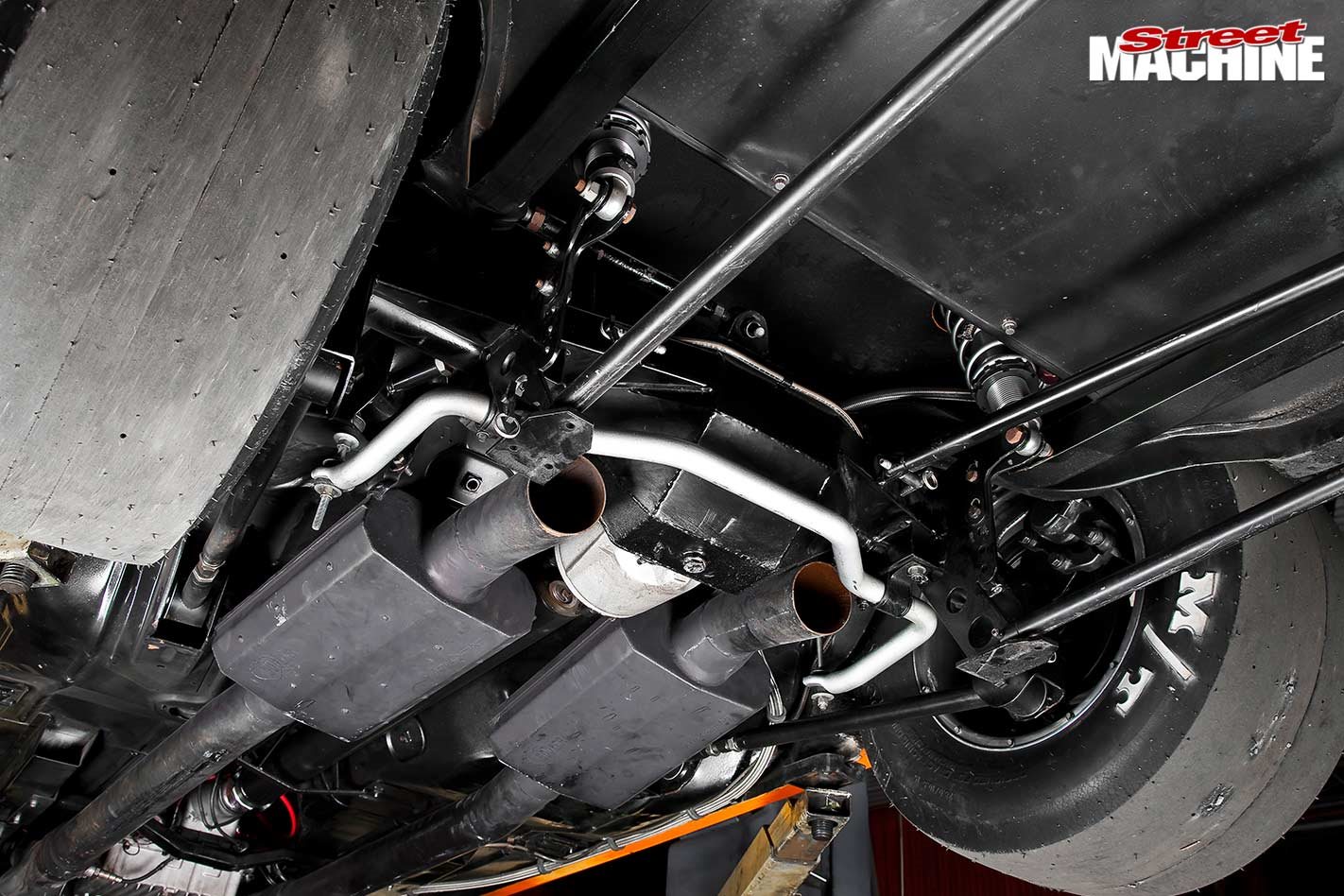 Computers, injectors, throttlebodies, boost controllers – it all adds up. Mark decided it made more sense to go naturally aspirated instead.

With a background in panelbeating, getting the body straight was simple. “I’m in construction now,” he says, “so there’s a lot of down time when it’s wet. But the body wasn’t too bad; it was a really good shell.”

Jake Forder from Werribee Panels came up with the custom orange mix. “I left it in Jake’s hands. I just said blue, orange or red. He did a panel in Lone Oranger and then did another with the black pulled out and it was better.” 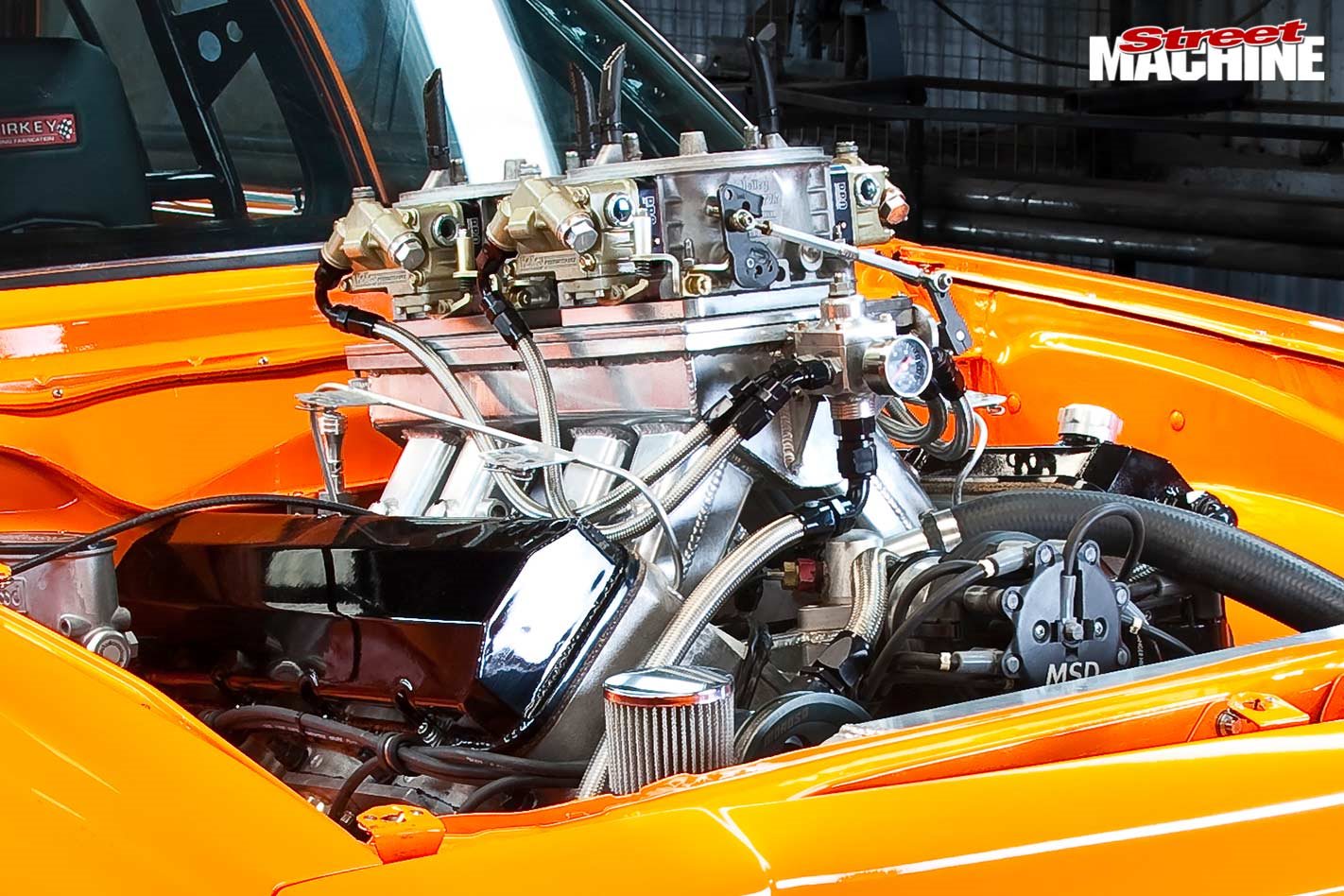 Mark’s mate Matty Petrovics gave the shell its juicy coating, in Jake’s spray booth. All the panels were done off the car – Mark got in on the act by painting the engine bay and boot himself, then Matty painted the whole car together.

Inside it’s pretty basic – two Kirkey alloy seats and a stock rear pew trimmed in black vinyl. There’s an SLR tiller to keep it pointed straight, a TCI shifter for gear selection, a scattering of gauges and that’s your lot. No need for a stereo; 622 cubes is all the aural stimulation Mark needs.

But when the Torrie first hit the street, it had far fewer cubes than today. Using a 400-cuber left over from his first Torana, Mark bolted on some Racer Pro heads and went 10.22 in full street trim, then 10.0 with the mufflers dropped. He also took the opportunity for some quality time with his family, taking the freshly built beast on the Geelong Australia Day cruise. 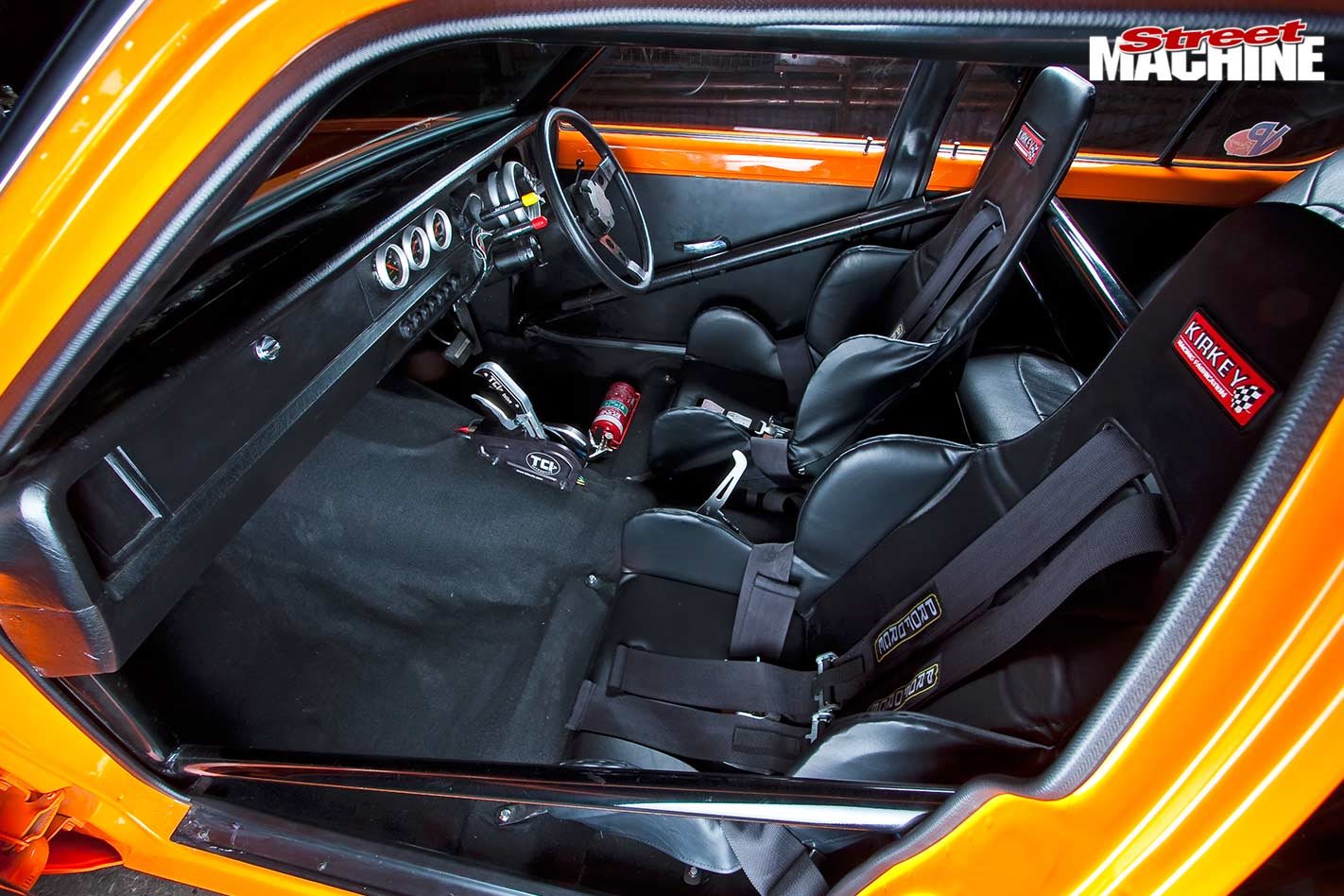 Inside has what’s needed, no more. Seating for four, a wheel and shifter, some gauges, and the all-important rollcage

But the 400ci combo was just filling in until the 434 was ready. So what about the promise of twin-turbo goodness?

“I was going to go twin-turbo and I had the motor ready but I added it all up and it was still going to cost me $20,000 to get it going.”

With the more serious 434ci small-block up front, the Torana lifted its skirts and blasted down the track in 9.25 seconds first time out. With some tweaking Mark lowered that to 9.002@151mph. 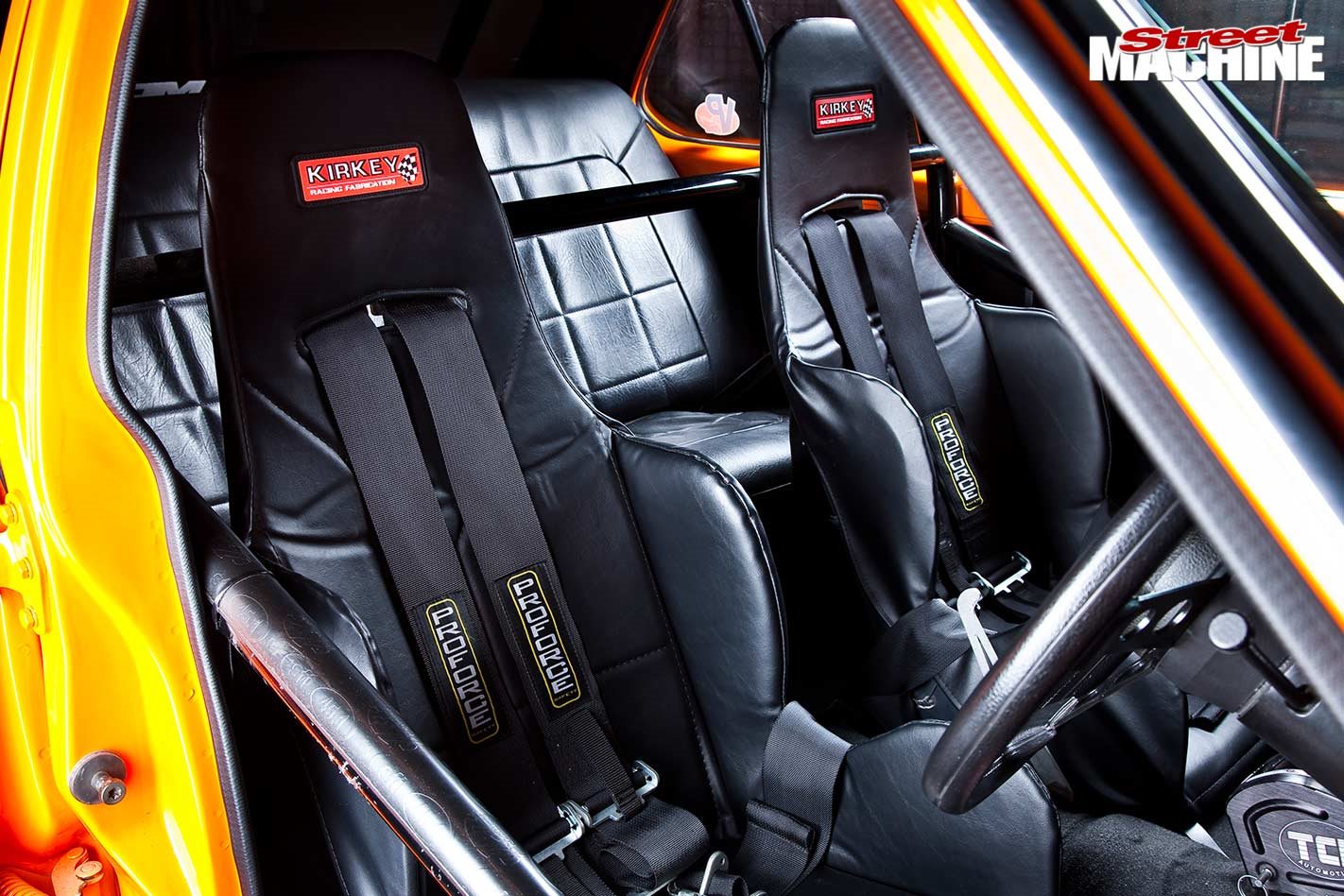 That’s pretty damn quick but only just enough to squeak into the APSA Top 10 list for Mod Street Unblown. With an eye to going faster, Mark sold the 434ci combo to a local racer with a car that looks like this LH’s twin, then purchased the 622 behemoth out of Johnny Wilson’s STAUNCH Torana.

The tall-deck big-block wasn’t exactly a bolt-in proposition but Mark’s not scared of a little work. He modified the engine bay and replaced the trans tunnel to suit the big-cuber. 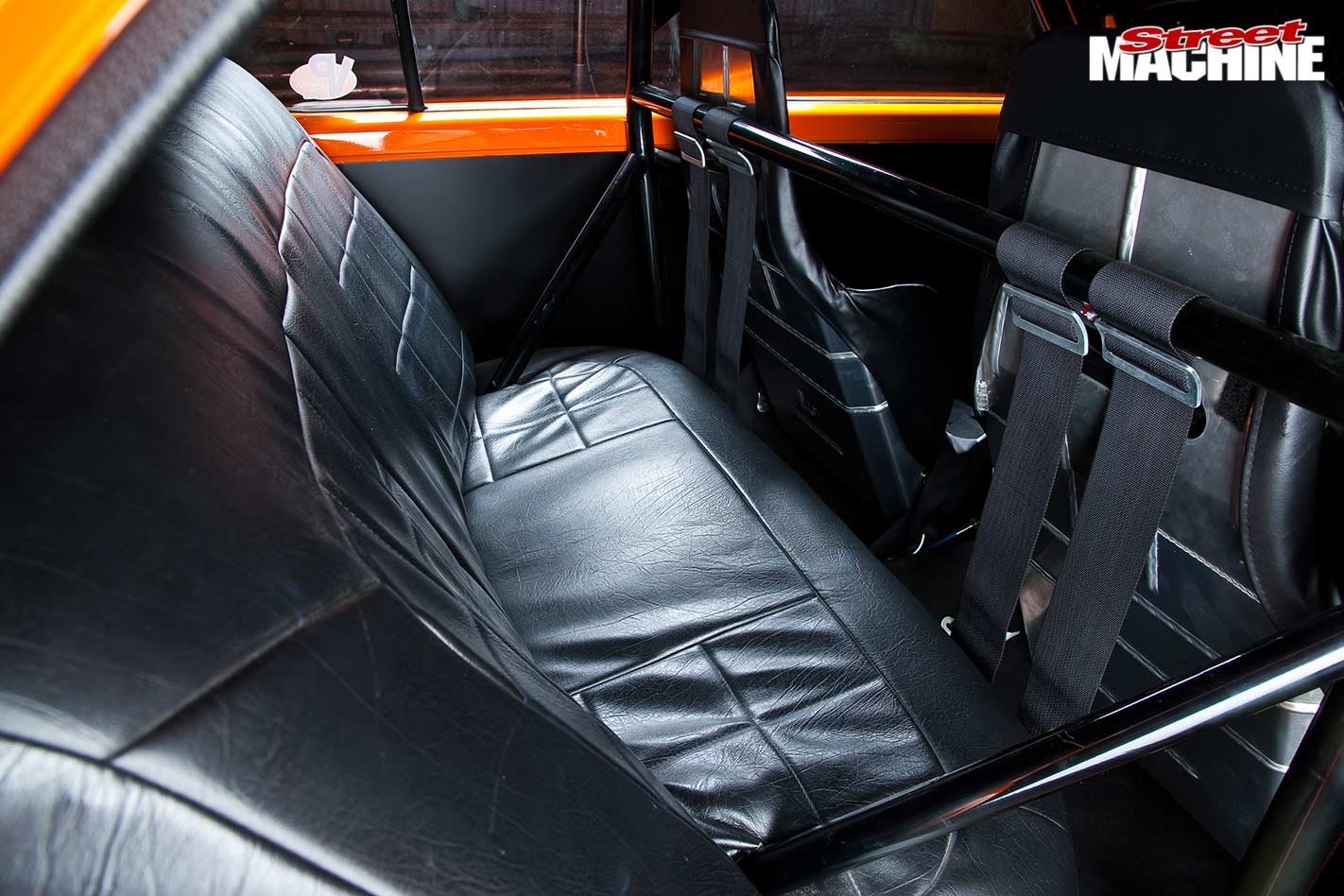 Sam Fenech freshened up the bottom end at Westend Performance while Mark had James from MCE go through the top end. The final combo has Oliver rods hanging off a Lunati crank and high-comp Diamond pistons handling the squeeze. Up top there’s a pair of 18-degree Big Chief heads with a Wilson sheet-metal intake and two 1180cfm Pro Systems Dominators. With a belt-driven and front-mounted MSD dizzy, plus an MSD Digital 7 handling the timing, the big donk is good for around 1200hp.

All that extra grunt needed a decent trans to back it up and Mark had Matt Despirito from MDT build him a bulletproof Powerglide in a Reid case. It’s filled with all the goodies, including a transbrake and a 6300rpm Dominator converter for those wheels-up launches. 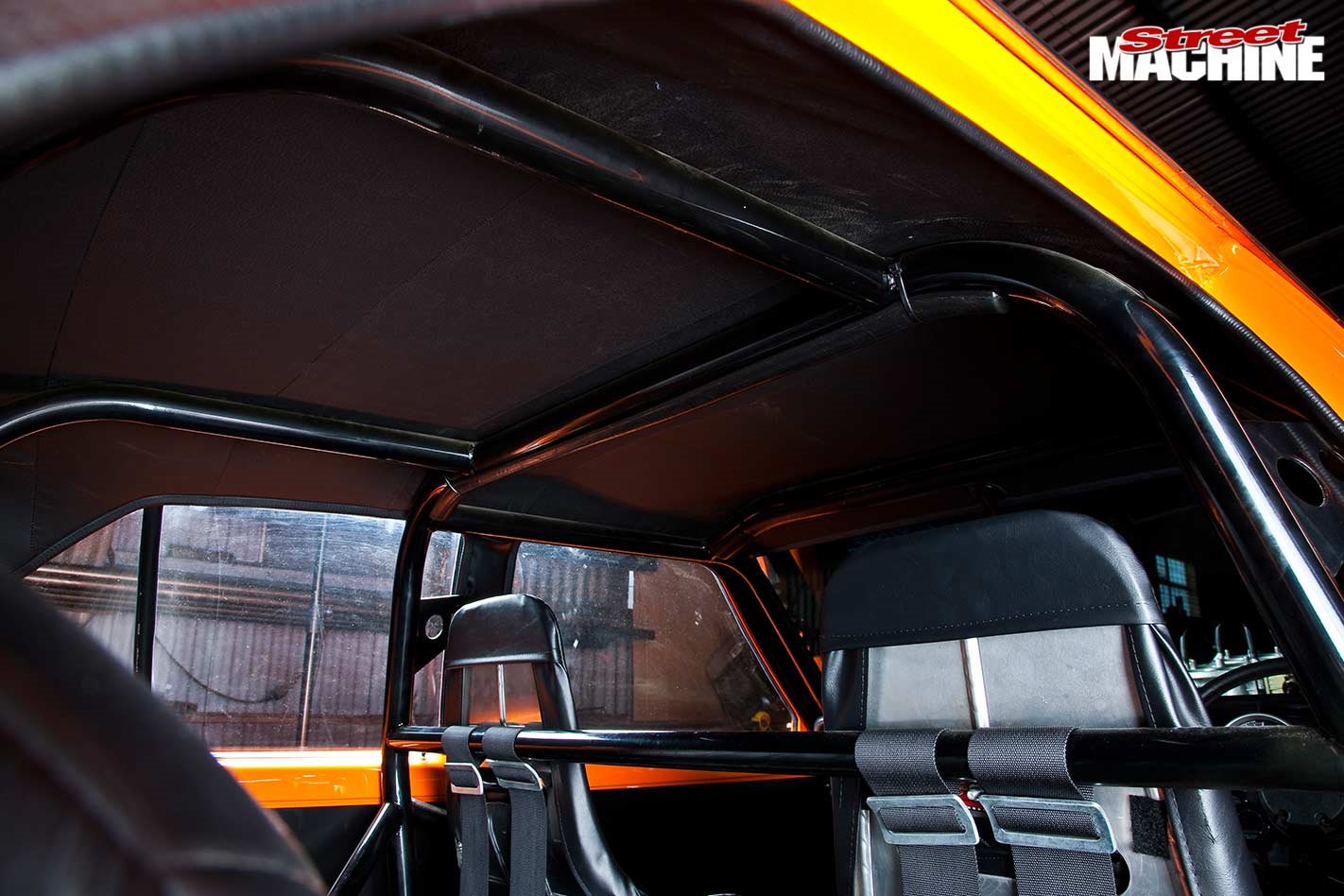 So far the combo has been good for an 8.44@166mph pass, which should push Mark a long way up the Top 10 list, but as a good racer will, he’s looking for even more.

“This thing drives like an arrow,” he says. “We put a lot of thought into the rear so I’ll probably give it another couple of hits aspirated.”

Then what? Well, Mark’s got a Wilson direct-port fogger kit waiting in the wings and he’s no stranger to the blue bottle. “I reckon by November we’ll be running 7.40.”