THE first new car Dad ever bought was a VK Regal 360 sedan,” says Melbourne’s John Prassas. John was only six years old at the time, but he instantly fell in love with the big beast. “When I got my licence, Dad gave it to me to drive around, so of course being a teenager I drove it like a maniac.” John eventually moved onto other things, but the Valiant bug lingered, and in 2007 he started looking for a Canadian-bodied AP5 Safari. “Dad had one of those too,” says John. “I was looking for AP5s on eBay and saw a 318-equipped VK Charger 770. I had a soft spot for the VK and it looked like it had potential, so I bought it sight unseen. “It had been turned into a bit of rat rod,” he says. “Flat black paint and silver flames, not to mention a pop-up sunroof. It was disgusting.” The identity crisis masked plenty of rust and an interior nightmare, and John began thinking he’d bought more than he’d bargained for. “When I started pulling it apart things got worse. In the end I figured I’d sell it to recoup some money then buy something virtually finished.”

But it was John’s wife, Nikki, who steered him back onto the Charger path. “Nikki persuaded me to buy it in the first place, then talked me into persevering with it – I’m not sure she realised how much time and money was involved but I’ll still give her the kudos anyway!” 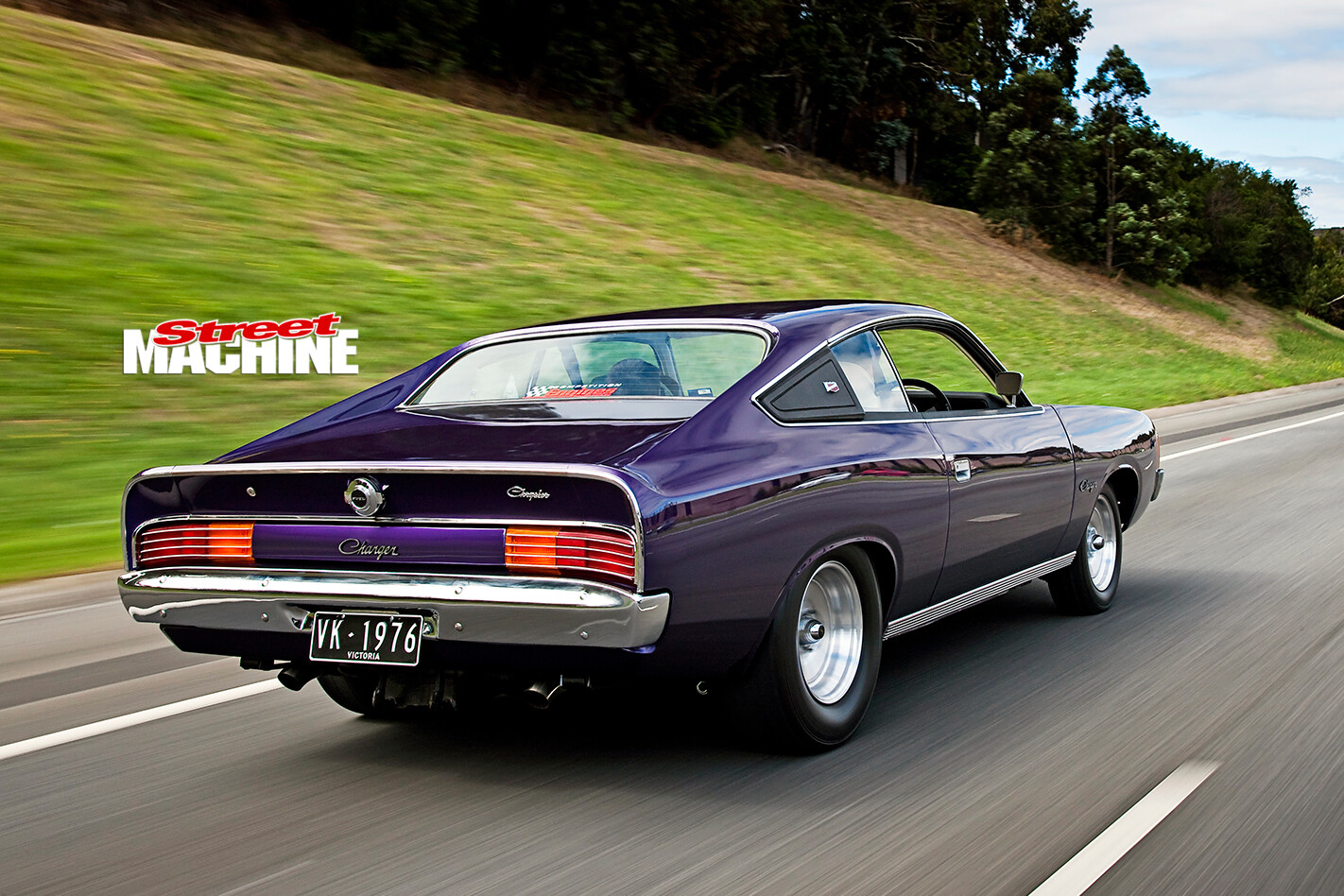 Work then began to morph the sad rat into a tough streeter. Finding a good panelbeater was a challenge. “I went through three shops who promised the world then couldn’t deliver, but were happy to take my money. I was lucky to find Travis McAllister at TDM Customs who was a complete professional – he’s only in his early 20s but has skills and vision well beyond his years.”

The body needed rust repairs to virtually every panel and the boot floor, plus of course that sunroof hole needed filling. Yet most of the factory brightwork remains. “Many Charger builds follow the replica R/T route with the stripes and all, while some go to the other extreme and shave off all the chrome and trim,” John said. “I’ve tried to land somewhere in the middle.” Plenty of thought went into the colour. “Factory Amarante Red was the original plan to keep things looking stock, then I was leaning towards silver, but I saw a few killer cars in purple, and that was it. I had plenty of input from family and mates and I think we nailed it in the end.” The Glasurit purple was tweaked to get the colour oh-so-right, and flowed on by the multi-skilled Travis. “When he rolled it out of the booth I knew it was the perfect choice; I was ecstatic!” The bumpers and trim, restored by Modern Plating and Auto Bling, add to the finish and depth of the custom purple. John entrusted brothers Zoran and Bobby from Competition Engines to screw together a stout small-block combination making more than 550hp, using the 360 from his dad’s Regal as the basis. The boys stretched the mill to 410 cubes with a Scat stroker crank, spinning Scat H-beam rods and JE flat-top pistons. A Wade custom grind cam sorts the breathing, with Comp lifters and Jet pushrods, while Ferrea valves with Crane rockers and springs organise the action topside. Ported Edelbrock alloy heads mount an Edelbrock RPM Air Gap intake and Pro Systems 1000cfm carb. The exhaust comprises custom four-into-ones flowing through to Hooker mufflers via a twin 3½in system. The trans is a manualised 727 Torqueflite running a shift kit and a 4800 stall. A custom moly 3in tailshaft with Strange yokes connects to a nine-inch packed with 31-spline axles, 4.11 gears and Trutrac centre. With the driveline taken care of, John turned his attention to the brakes and suspension. UPC twin-piston calipers grabbing slotted front discs are matched to stock Ford rear drums, all activated by the factory offset V8 master cylinder and booster. A two-inch lowering job via reset front torsion bars and offset reconditioned rear leaves gets the stance nailed, while satin-finish Center Line Autodrags in 5½in and 8½in widths finish it off.

The once-knackered factory Boca Raton 770 seats were given a new lease on life in off-white by Jim at Terry’s Motor Trimming, who also handled the matching door trims. The carpet and coffin console are in lower-maintenance black. A factory three-spoke Chrysler steering wheel fronts a stock fascia housing a mix of standard and aftermarket gauges. 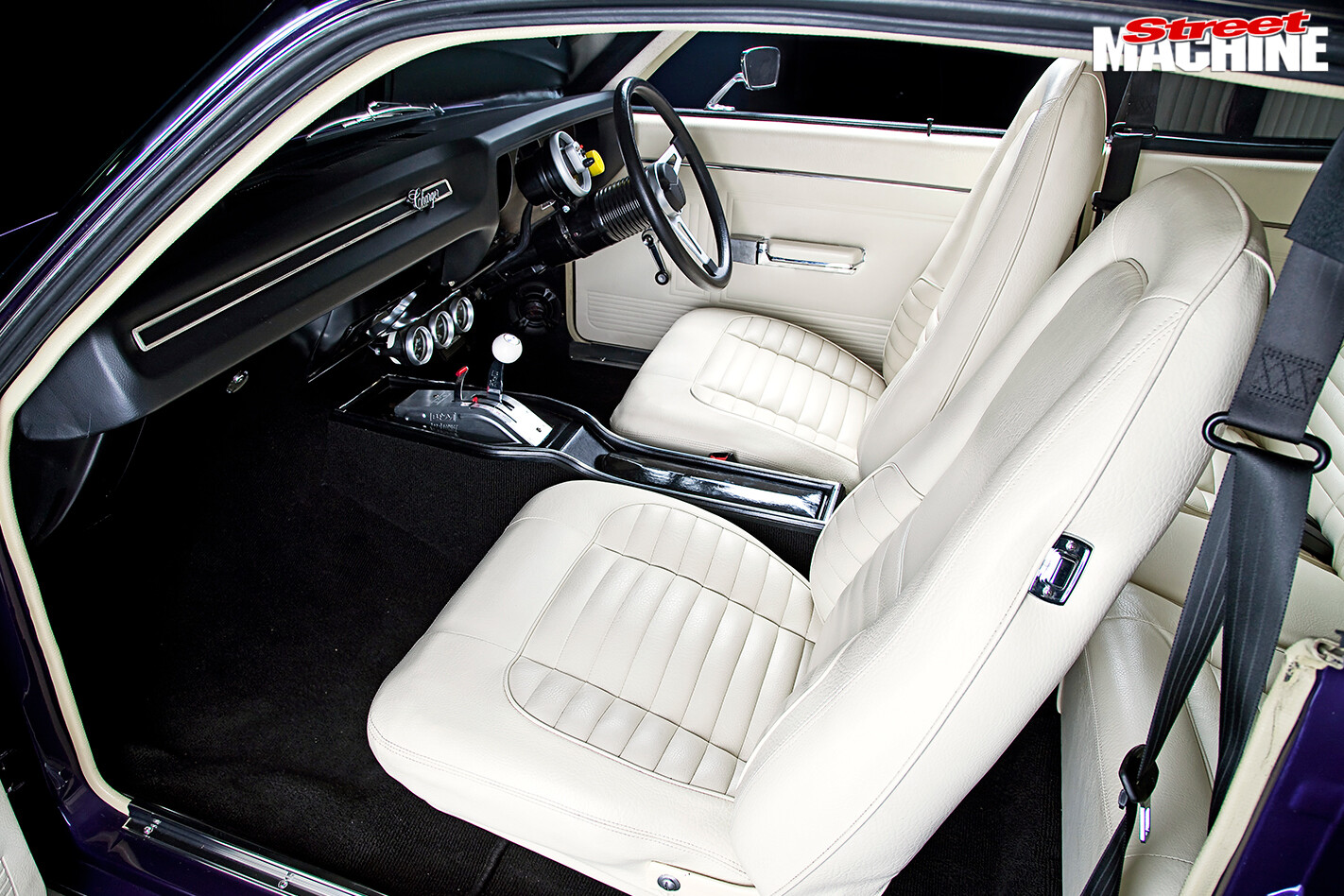 Five years on from his initial dramas, John and the Charger returned to the streets in October 2012. He and his mates cruise frequently. “We catch up most Friday nights and it’s a real thrill to have the car on the road. I really need to say a special thanks to Nikki and my good mate Con from Dallmore Automotive for keeping me in check – I get pretty anal when it comes to the finicky details and was lucky to have them keep me focused. Con was a major help when we reassembled the car and kindly offered the use of a hoist and his mechanical ingenuity throughout the build. The same goes for Zoran and Bobby from Competition Engines and Travis from TDM; their interest and professionalism has made the car what it is today – and restored my faith in tradesmen!” 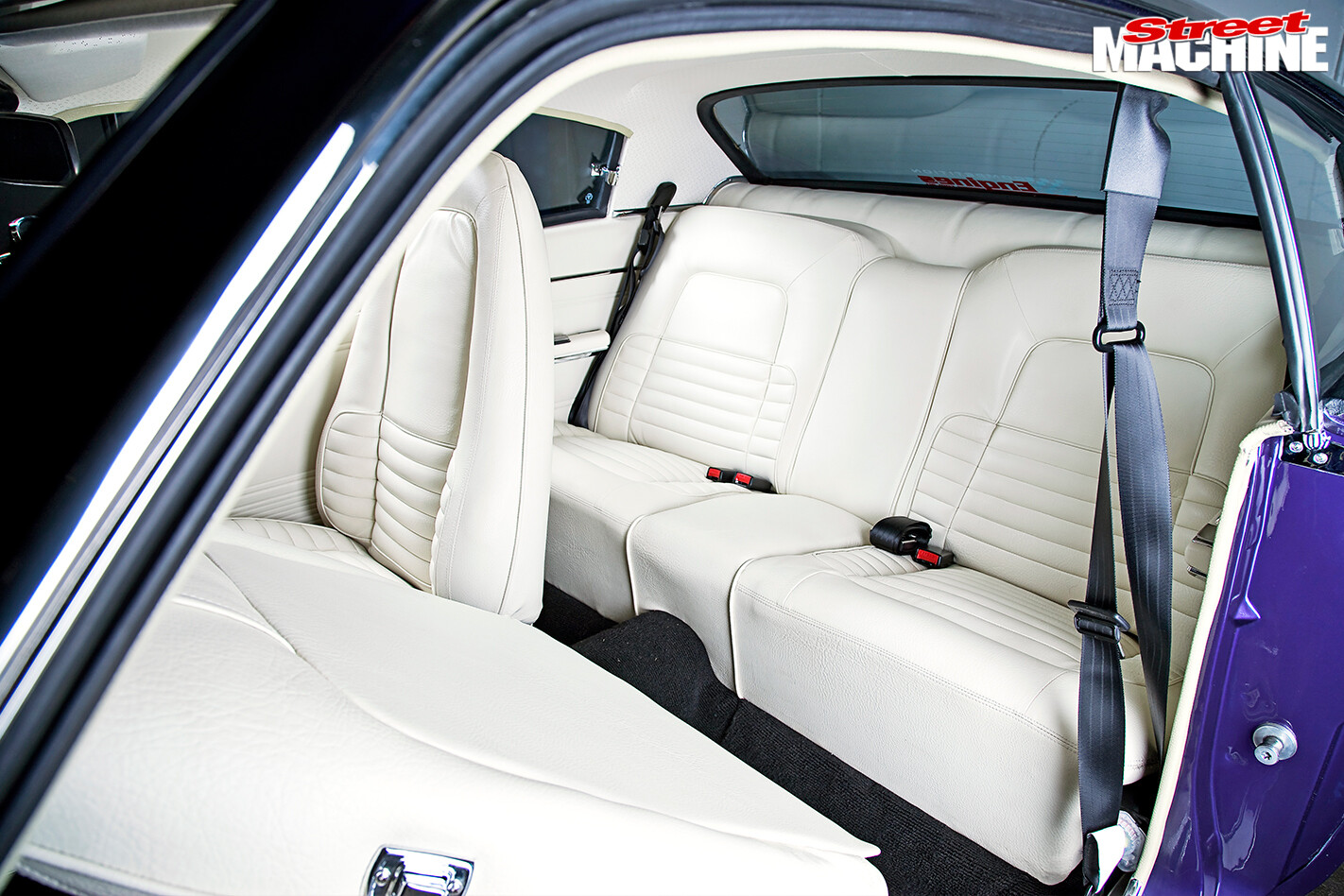 All that professionalism hasn’t gone unrewarded: top five and best Charger awards at events such as Chryslers on the Murray 2013, Chryslers by the Bay 2013 and the Chrysler Restorers Club of Victoria Display 2012 are nothing to scoff at, and a best small-block win at the COTM 2013 dyno comp backs up the ‘tough’ element – future plans include a reverse cowl scoop and Weld Magnums. With the Chrysler bloodline already passed once from father to son in the Prassas family, it’s no surprise to now see 11-year-old Evan coming on. “I’m keen to get him into an AP5 sedan, although he’s more of a VC fan,” said father John. And the tradition is spreading: “My 10-year-old daughter Jaimee is just as involved – I may need to look for two future projects.” And Dad’s old Regal? “It’s sitting under a tarp in the yard. Mum wants him to get rid of it, but he’s determined to hang onto it. It has quite a bit of rust in it, but it might be another project for me.”