Street Machine's Simon Major dreamed up this Chrysler CL Valiant van when he was nine years old. Three decades later, he built it for real

SEND THE DeLorean back to 1982, and I’m an eight-year-old obsessed with BMX and big rigs. I’m at the newsagent scanning the latest Truckin’ Life when I stumble onto Custom Vans & Trucks issue 24. My mum figures it couldn’t do any harm so she shells out $1.85 in exchange for me washing her shovel-nose Toyota Corona. 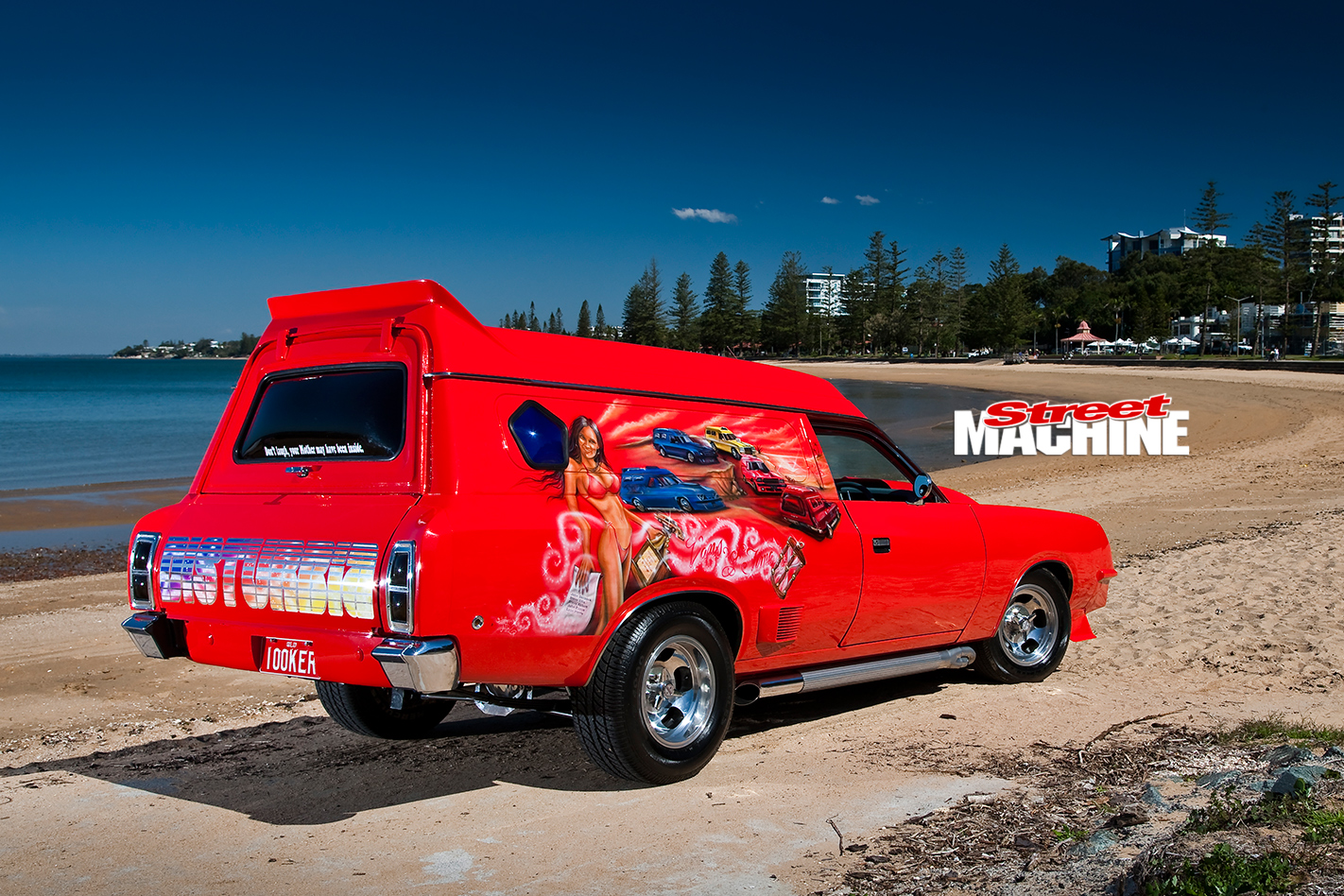 I proceed to pore over this magazine and am soon completely hooked on vanning. By 1983 I’ve had a letter published in Custom Vans & Trucks outlining the Valiant van I intend to build, but it’s another 29 years before I finally did the deed. Of course, by that time I’d built my fair share of cars and raised a family. Did I really still want to fulfill the vision of my 9½ year old self? One whose main features include a Trans-Am front, full-on murals and crushed velvet interior? You betcha! Aside from a few small details, the van – now named Disturbia – is alarmingly similar to how I wanted it all those years ago. 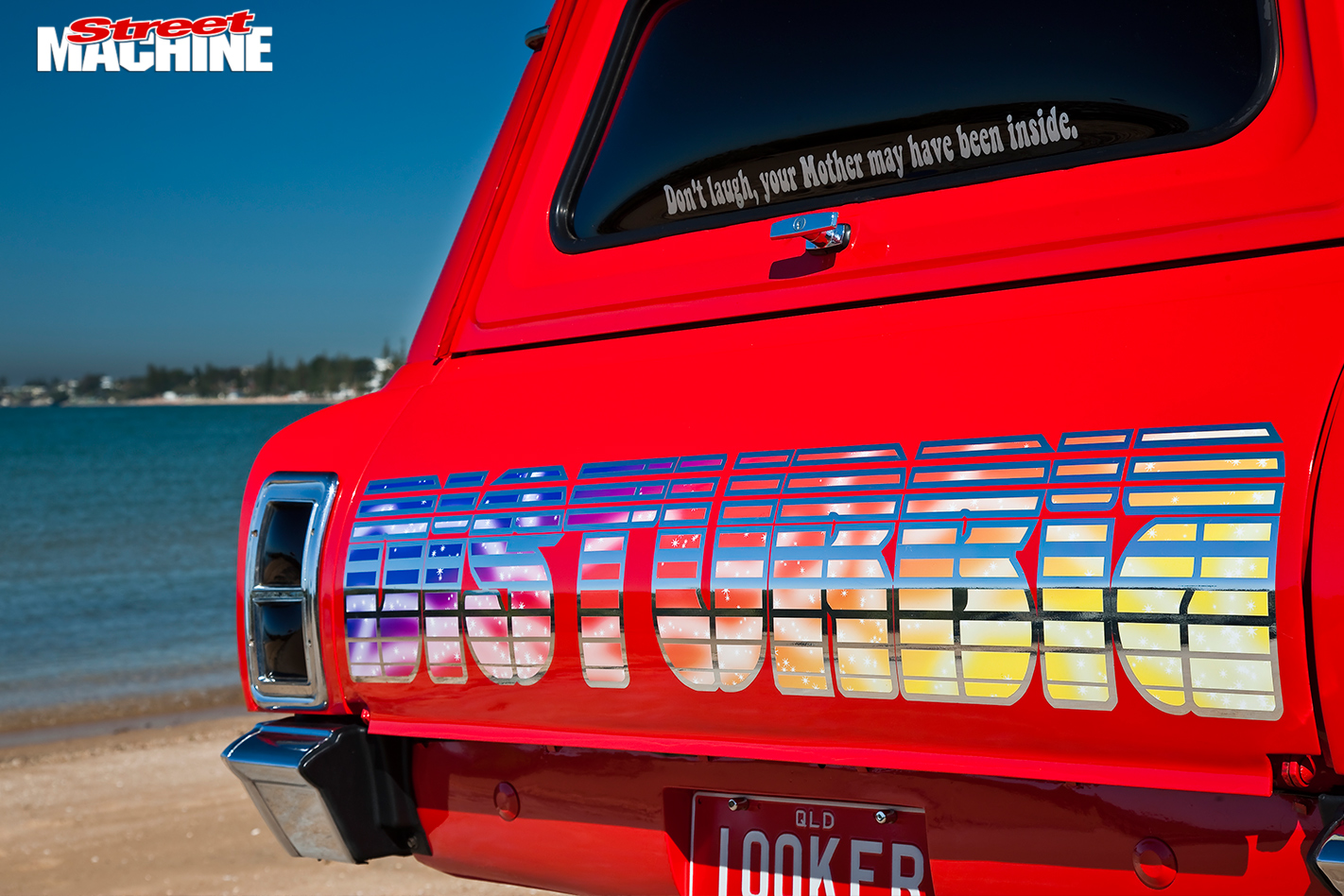 I bought the van in 2005, just as it was on the cusp of heading to the wreckers. It was sight unseen, but for $499 I figured I’d at least get a couple of bits to put aside. I was pleasantly surprised when it turned up in the driveway. A decode revealed a Stellar Blue V8 manual sports pack and a quick cleanout had it showing plenty of potential. The bolt-on panels were completely rooted and the engine and trans were long gone, replaced by a seized Hemi 245 teetering all by its lonesome on the K-frame. The perfect example for the sacrilege I had in mind. There was no interior, and plenty of other vital bits were missing, so I sourced a rear-smashed CL Regal V8 sedan to donate the shortfall. 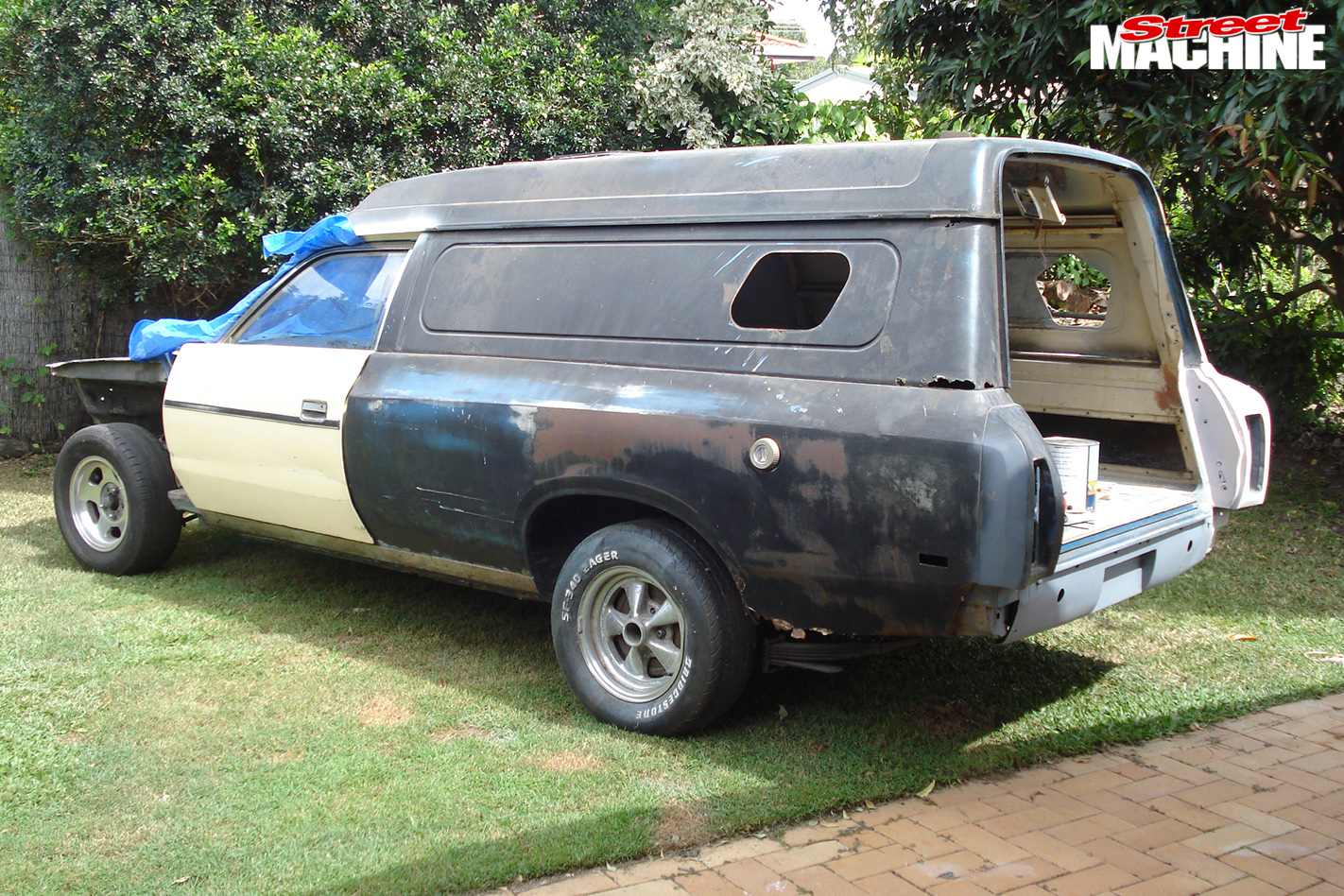 The only way I could afford the build was to do as much as possible myself, so I bought a cheap MIG and sorted out the rusted radiator support panel, floorpans and shifter hole, while my mate Chris Bangay tackled the trickier pillar welding when the rusted plenums were replaced. New sills, lower rear quarters, filled side windows and a butchered sunroof hole were all handled by yours truly, and I used reversed VG hardtop roof gutter seams to replace the badly rusted originals. Mint replacement doors and front panels saved a heap of prep work, then it was time for the fun to start. 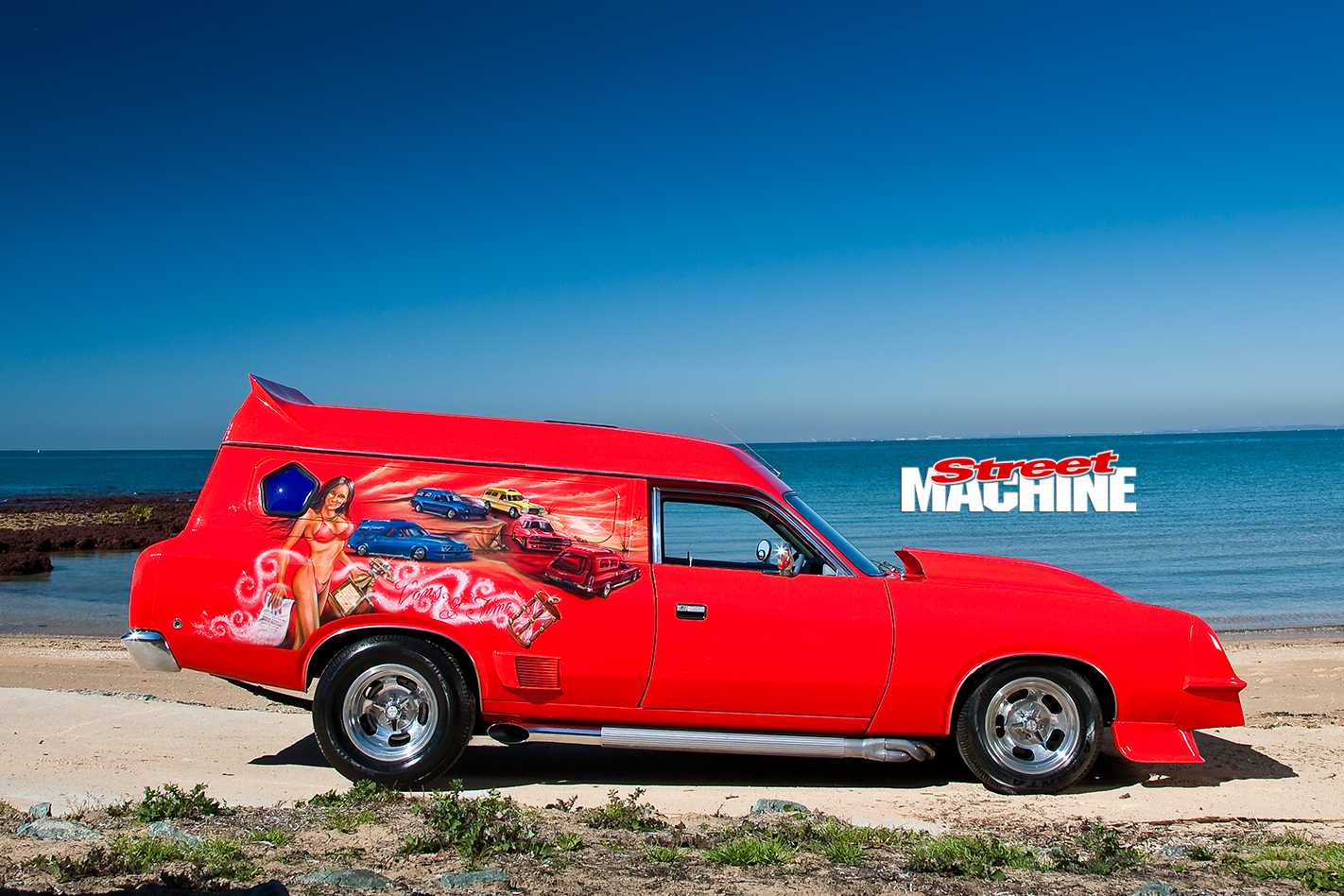 Another mate, Ash Knowles, whipped up a neat rollpan to tidy up the rear, while VG Valiant Safari tail-lamps were a bolt-in deal. We replaced the chunky stock side markers with ’68 Dodge Charger versions, and an HQ Holden panelvan roof spoiler was heavily sectioned, narrowed and moulded in to better suit the unique Chrysler roof pressings. 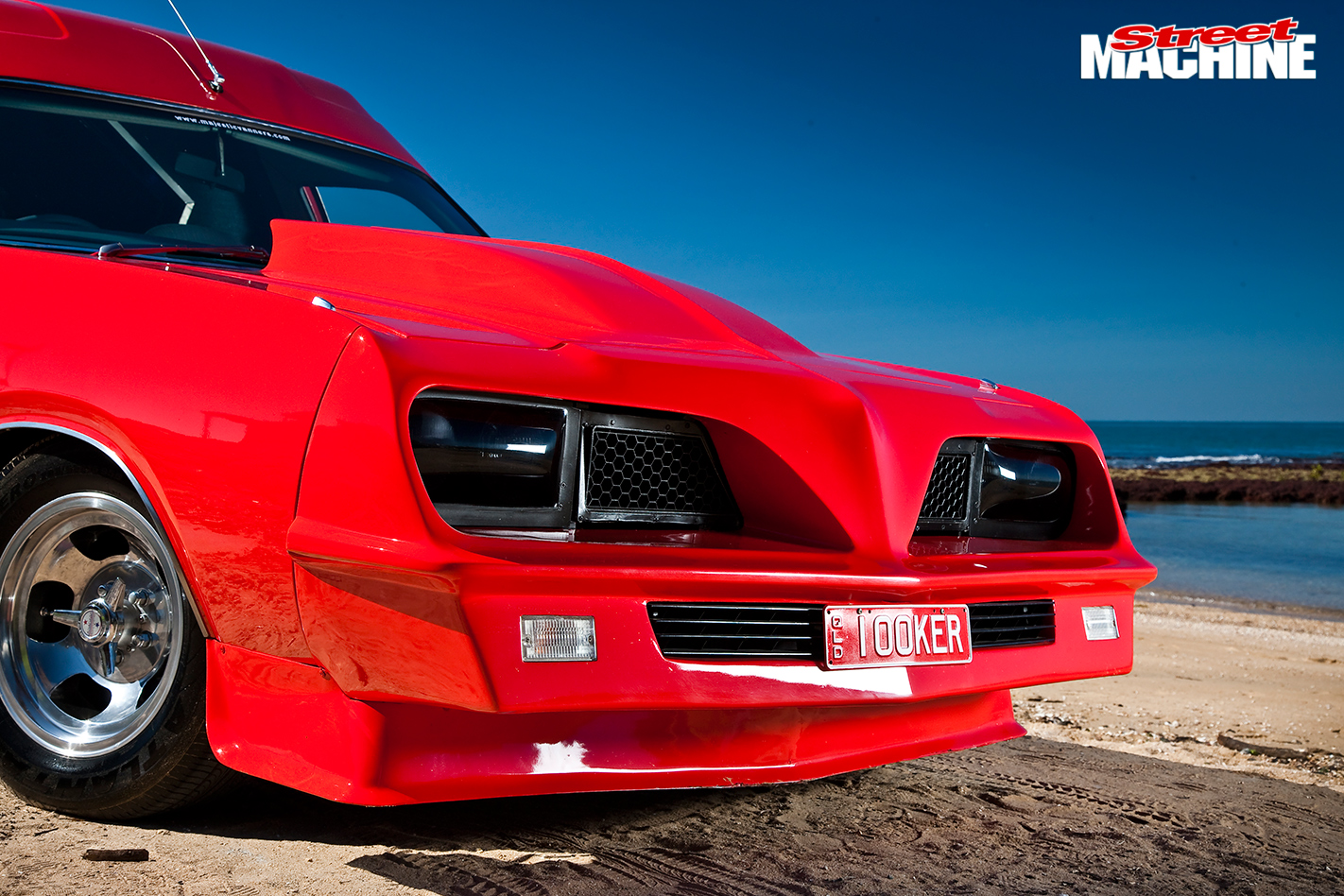 The spoiler was a test bed to learn some ’glassing skills before tackling the pièce de résistance – a genuine 1970s J&G Automotive fibreglass Trans-Am front. They’re an awesome fit on an HQ, but it needed a month of my spare time to neatly fit the CL. To make rego easier, I made it a totally bolt-on affair by grafting it to the steel Valiant nosecone. This hides a hefty RHS front bumper, which was welded to the factory irons. 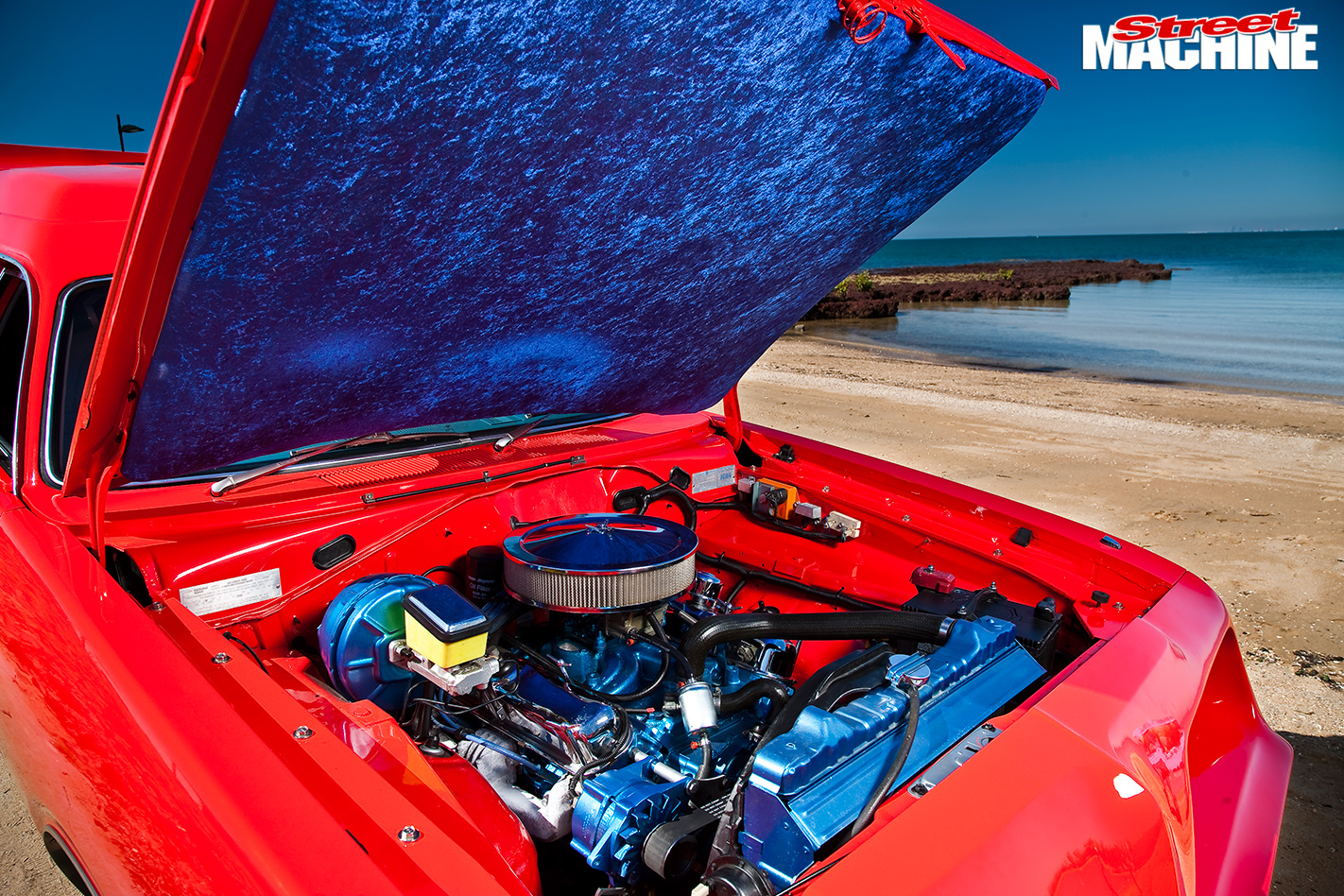 Amongst all of this, I’d been building a 318 donk, which remains pretty stock apart from a mild cam, headwork, a two-barrel Holley and a cool-sounding Gilmer cam-drive set. 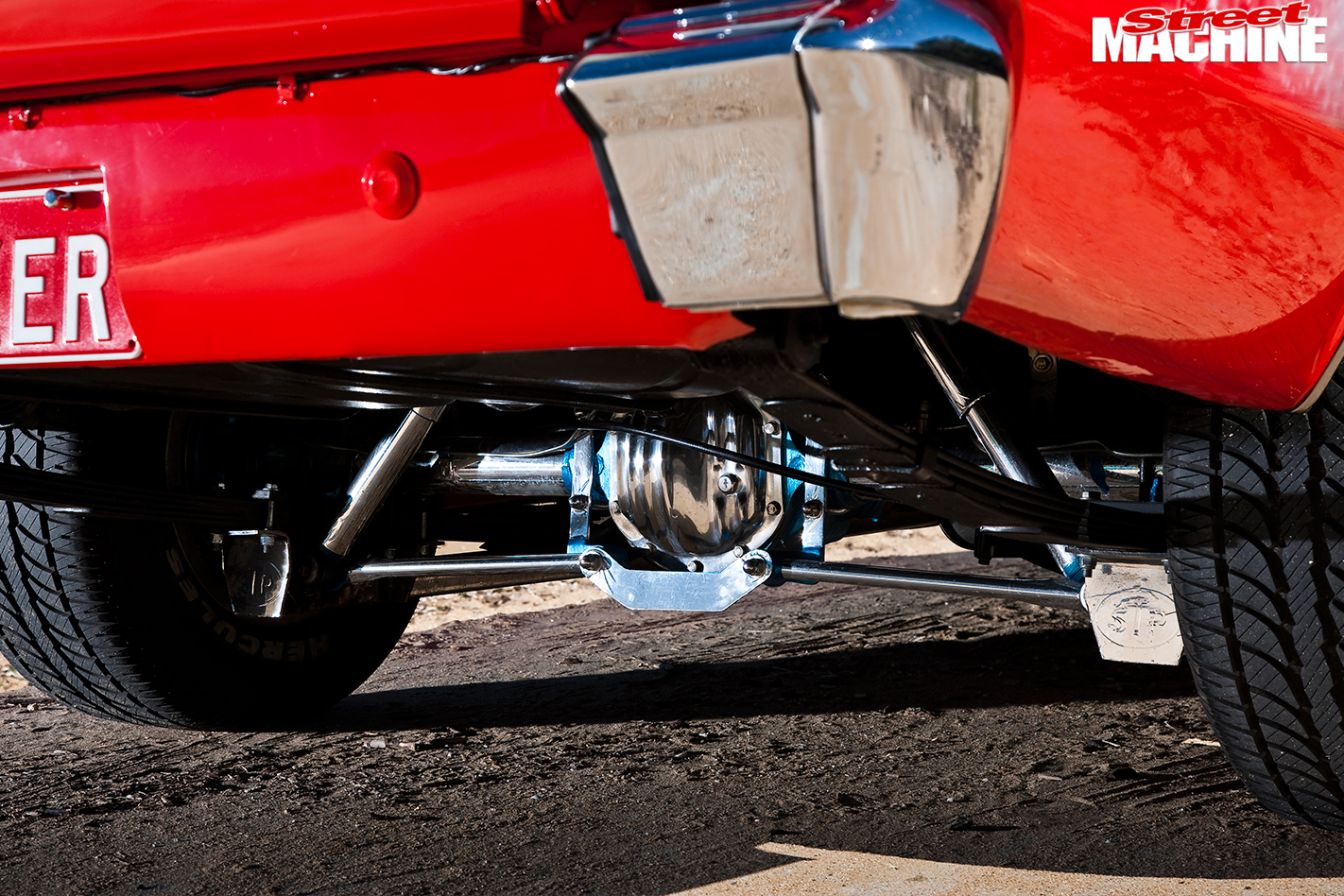 Once the bodywork was complete and prep coats done, the shell was rubbed back and sent to Tim Hall, who flowed on the BA Falcon Vixen Red topcoats. My original plans called for a Coca-Cola ‘Denimachine’ paint scheme, but at the 11th-hour I realised the van deserved its own identity. The choice came down to blue versus red, with red winning out to better help the murals and Trans-Am front to pop. 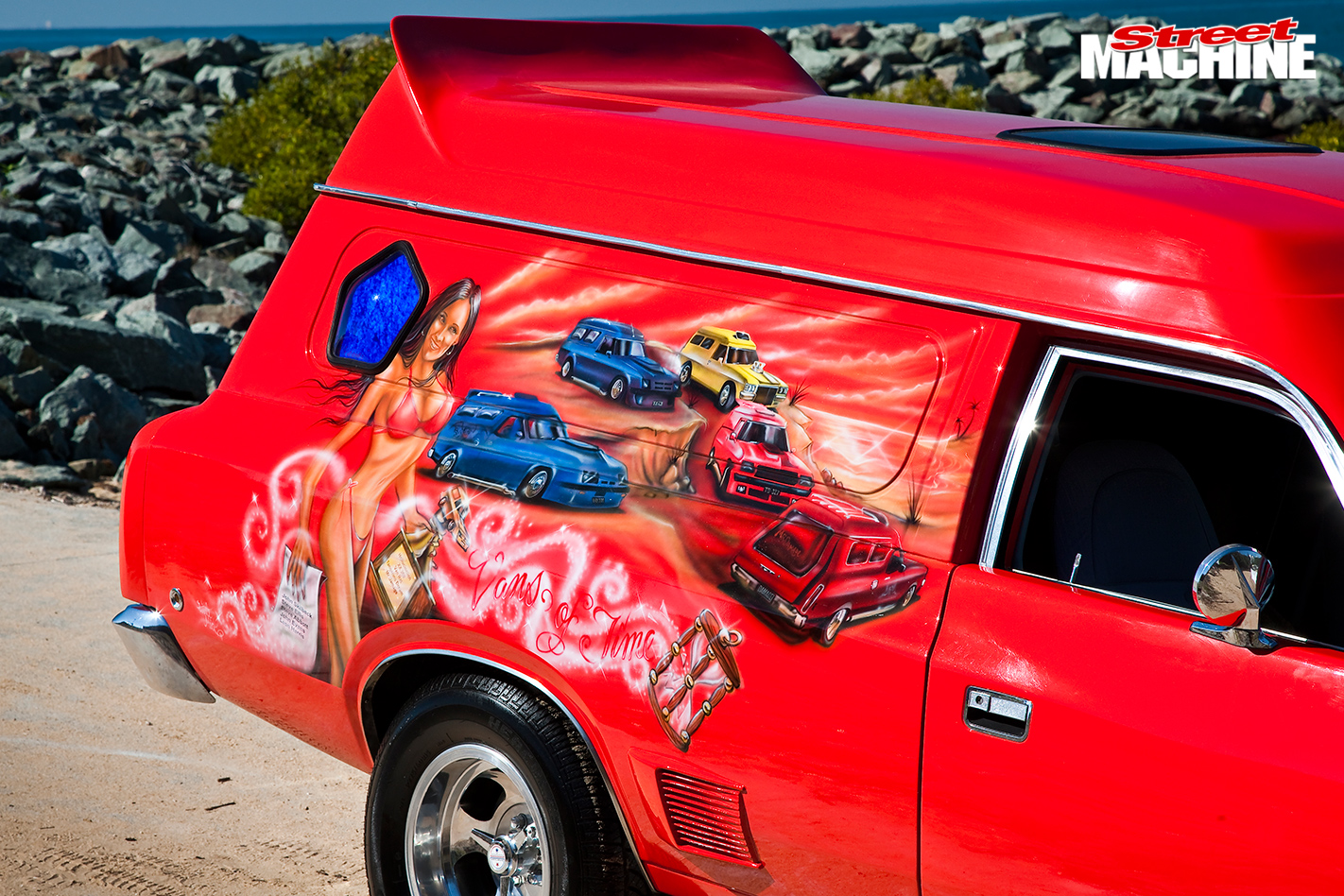 As a kid I’d watched Little Mick airbrush at van shows, so it seemed appropriate to have him wield his magic decades later. I was blown away by the result – a traditionally themed big-boobed slayer fills one side, while a van remembrance wall paying homage to five favourite vans graces the other. The interior was themed mullet style: business up the front, party out the back. 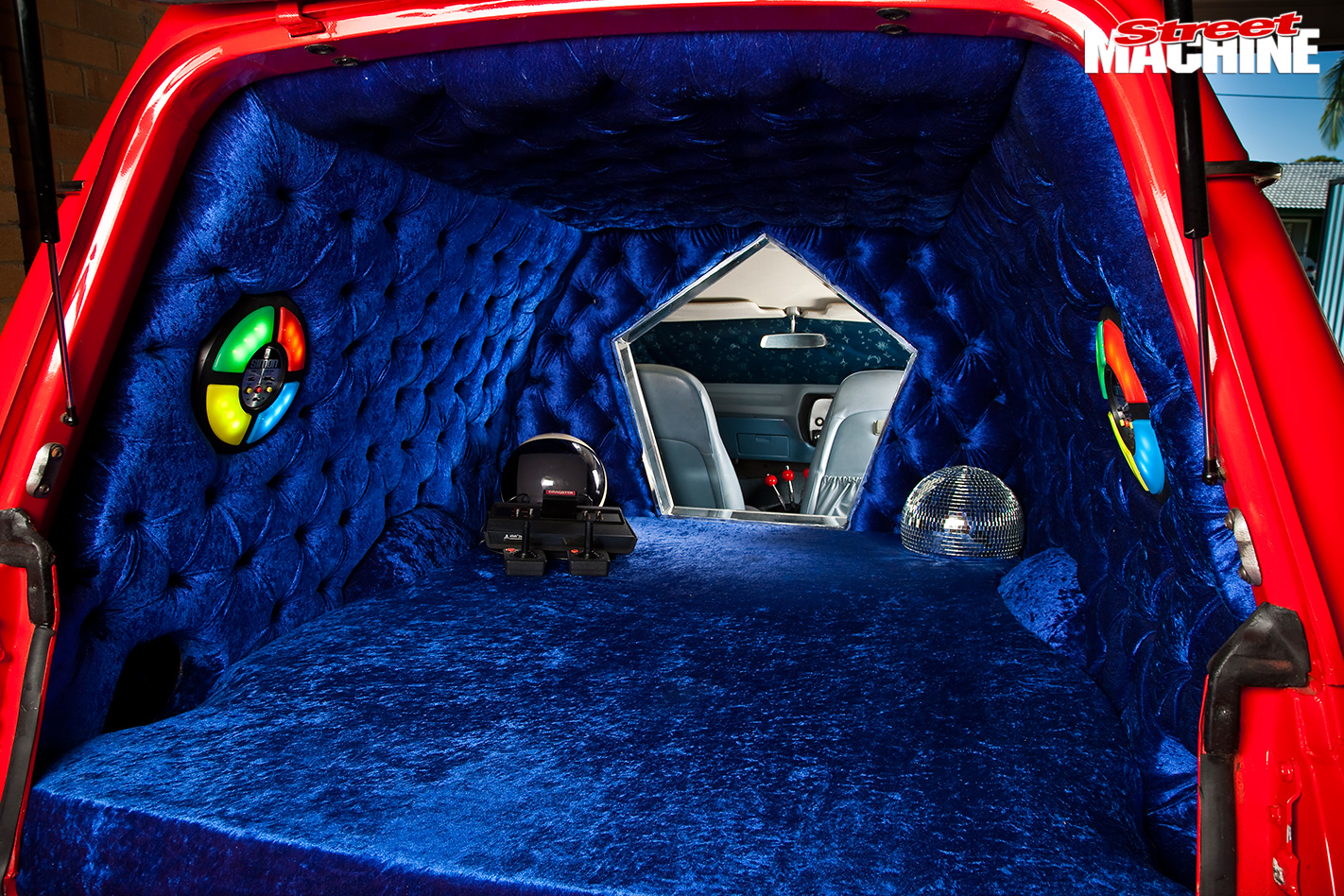 Now that all’s said and done, Disturbia is a huge item ticked off my bucket list, and I’m having a ball driving and showing it. People either love it or hate it, get it or don’t get it – there isn’t much middle ground. 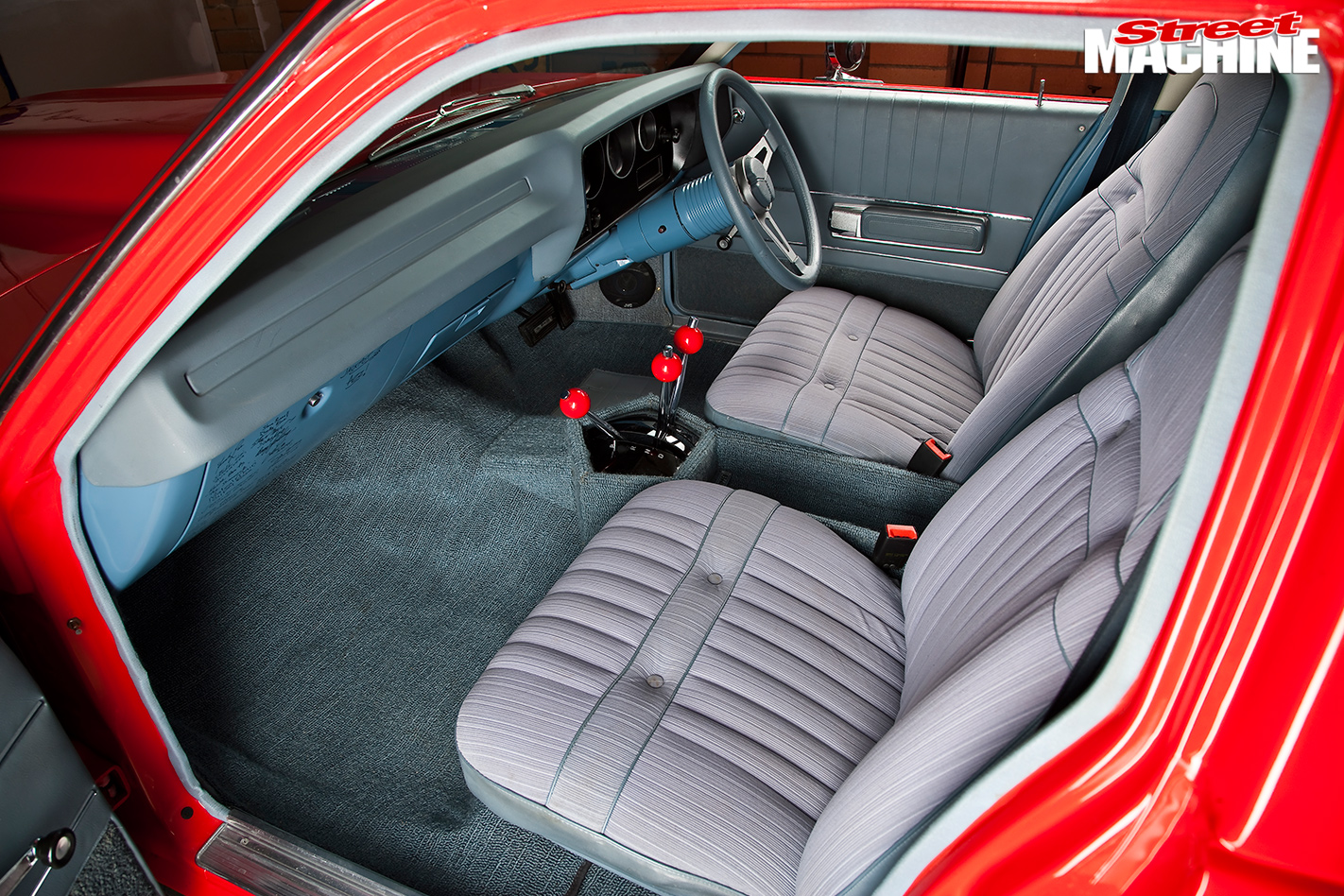 Budget restrictions and stubbornness saw me do 95 per cent of the work myself – while still having a possessive hand in the remaining five per cent – but it would never have been finished without the help of my great mates and my long-suffering wife, Vanessa. In hindsight, I can say that this was more than just a project; it was a journey. I don’t want to start sounding all corny here, but how else can you describe a build that’s essentially spanned three decades? Forget about the van for a minute, it’s the core of the build that spins me out. It’s the strengthening of mateships, learning a heap of new skills and meeting many of my vanning heroes – guys like John Evans, Steve Abbott, Fuzz Heinrich, Steve Towers, Greg Mercer, John Strachan, Leon Harris and Little Mick – who gave up their time and advice to see Disturbia hit the streets. 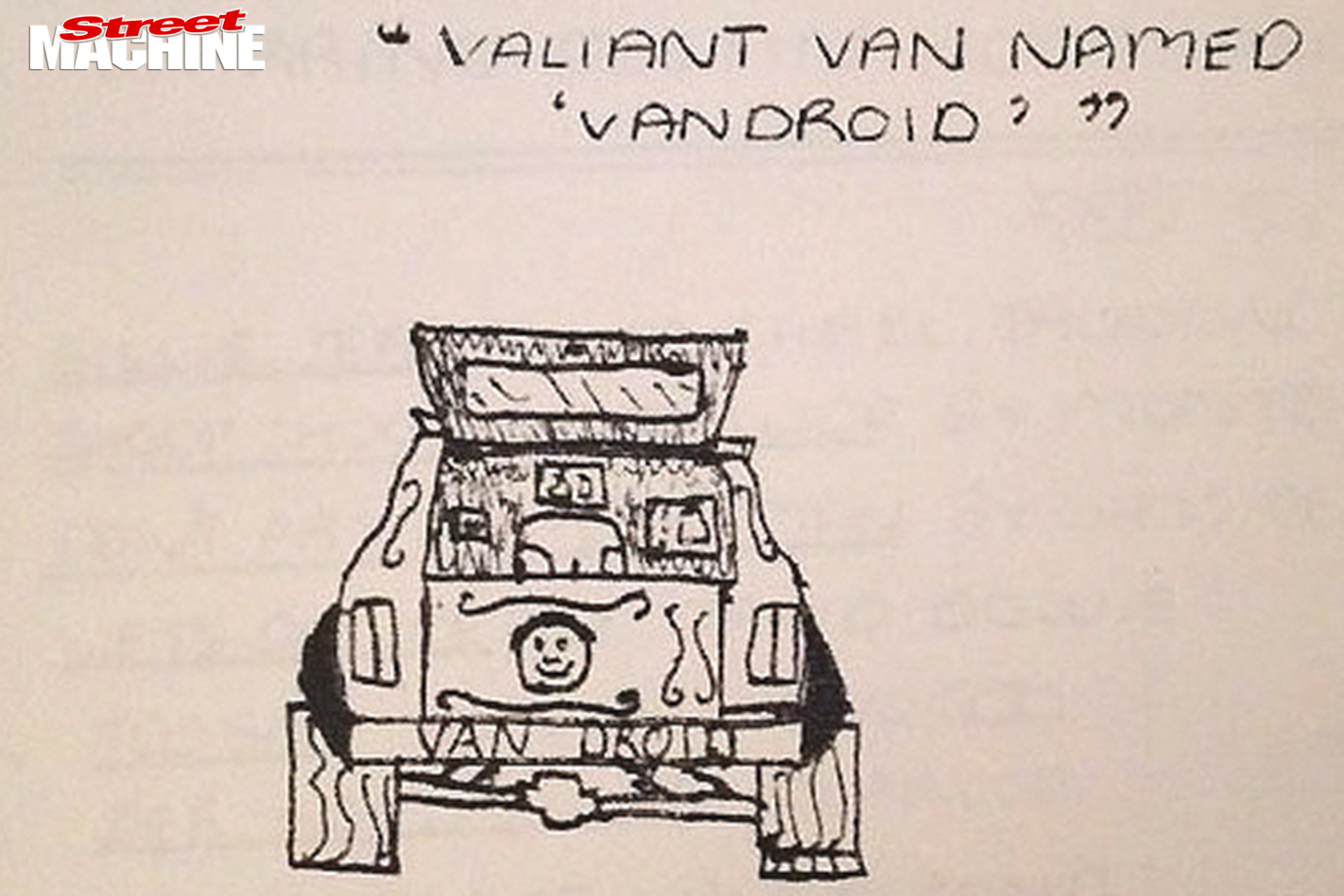 Although this journey has come to an end, it’d be a shame not to put some of my newfound skills to further use. There’s one last childhood dream itching to be built; a Midnite Spares movie replica Holden one-tonner tow truck. The spare HQ front filling space in the shed may find a home after all. One thing’s for sure, though, it’ll be a hell of a lot easier to fit. 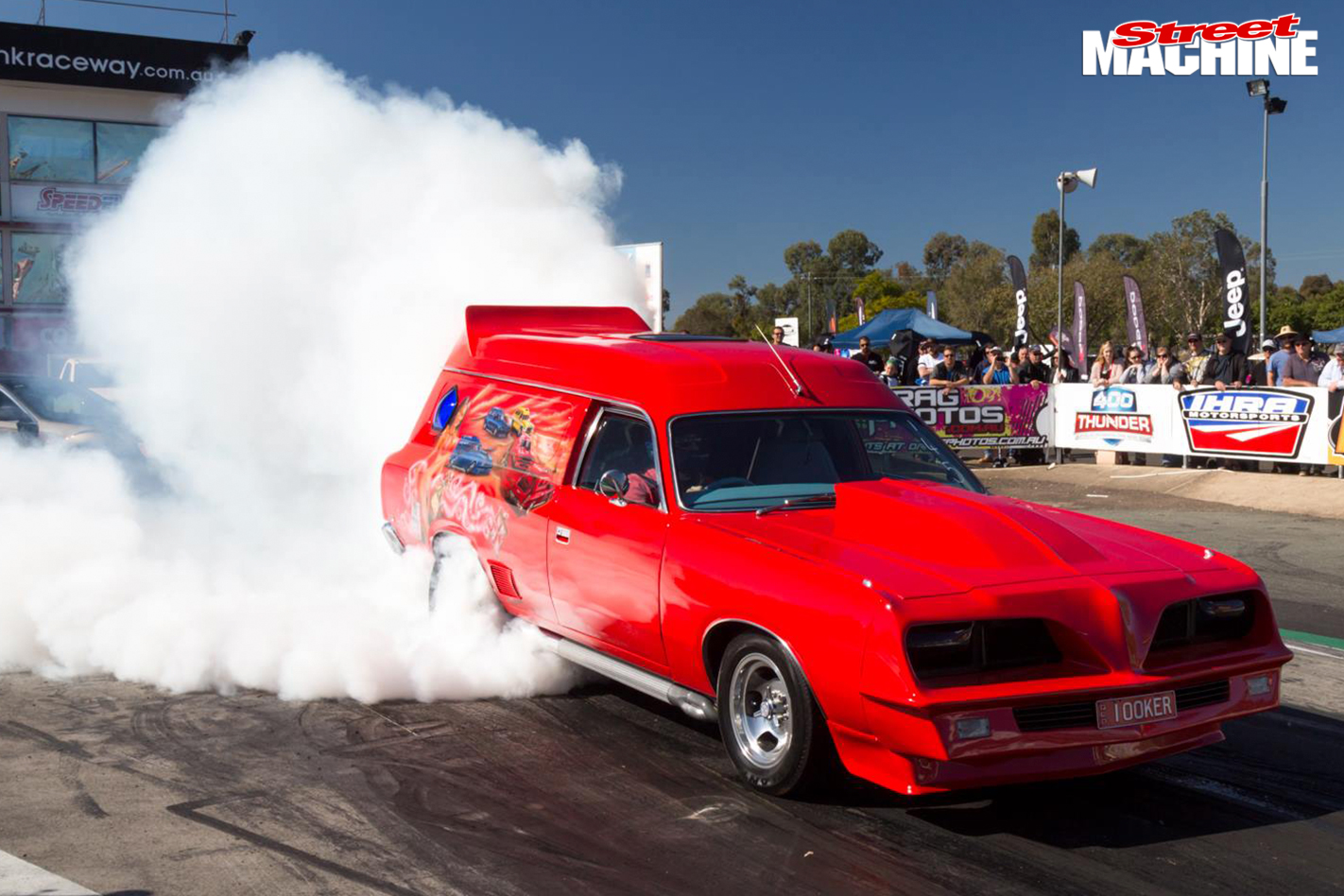