David Street applies some new-school tech to an old-school classic and liberates 360 horses!

David Streat wanted to turn his cool but cranky 1977 Holden LX Torana SS hatch into a sweet-driving getaway machine, so it was time for a modern overhaul

WITH a shed full of GM products, Dave Streat is spoiled for choice when the weather is clement and he wants to play. But although the Queenslander loves power as much as the next guy, he also likes machines that play along. And for a long while, that wasn’t the case with his LX Torana hatch. 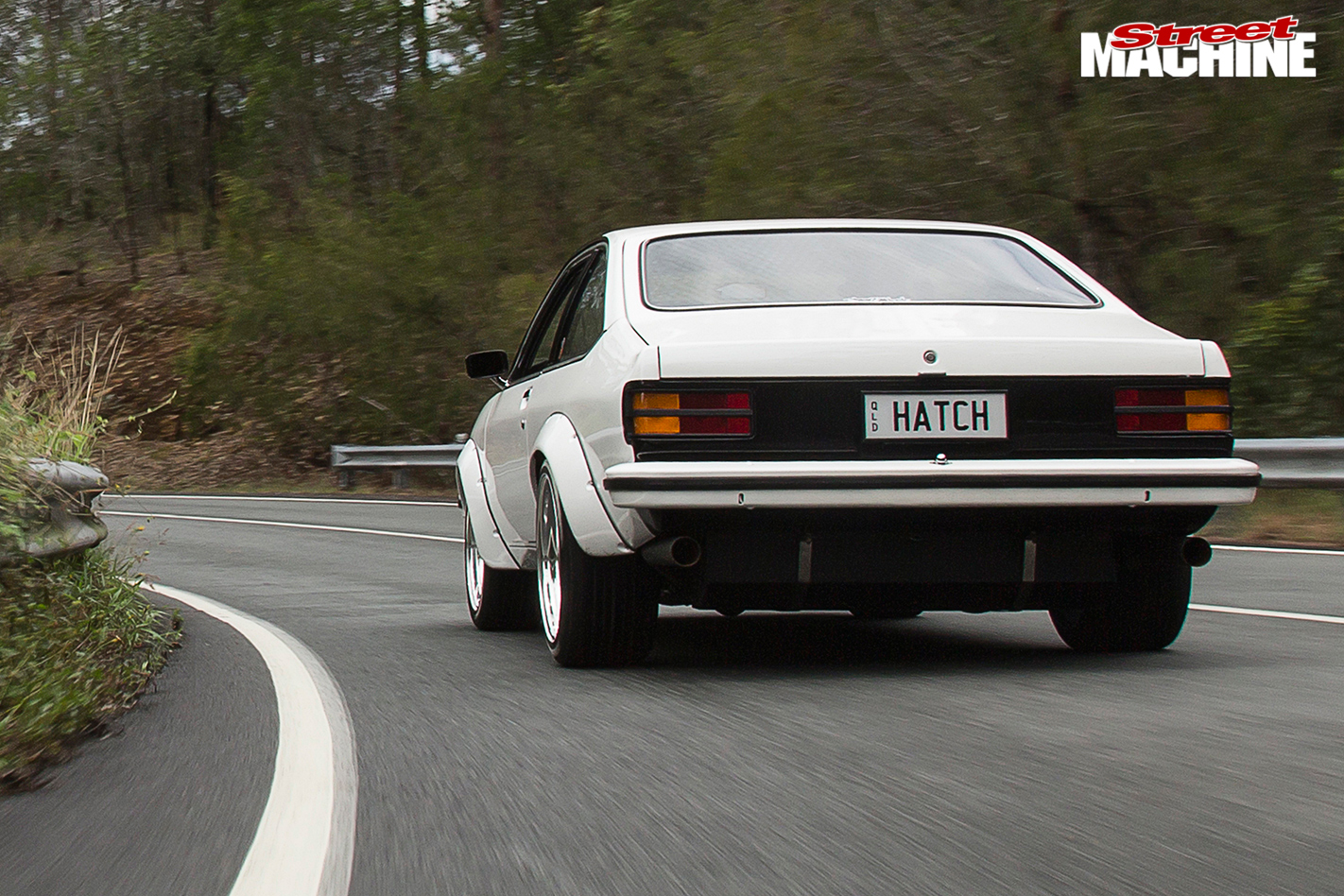 “Every time I started the Torana, it took bloody ages to get going – coughing and carrying on,” he says. He wanted to able to get in the car and just drive, without having to go backwards in power. “And it had to be manual so I could have some fun!” he laughs.

So with the white hatch already packing an angry 350-cube Chev under the classic A9X scoop, Dave had no problems with the idea of improving things. Of his decision to meddle with a genuine SS hatch, he has this justification: “I’ve also got another SS hatch in green; it’s a near-stock automatic.” 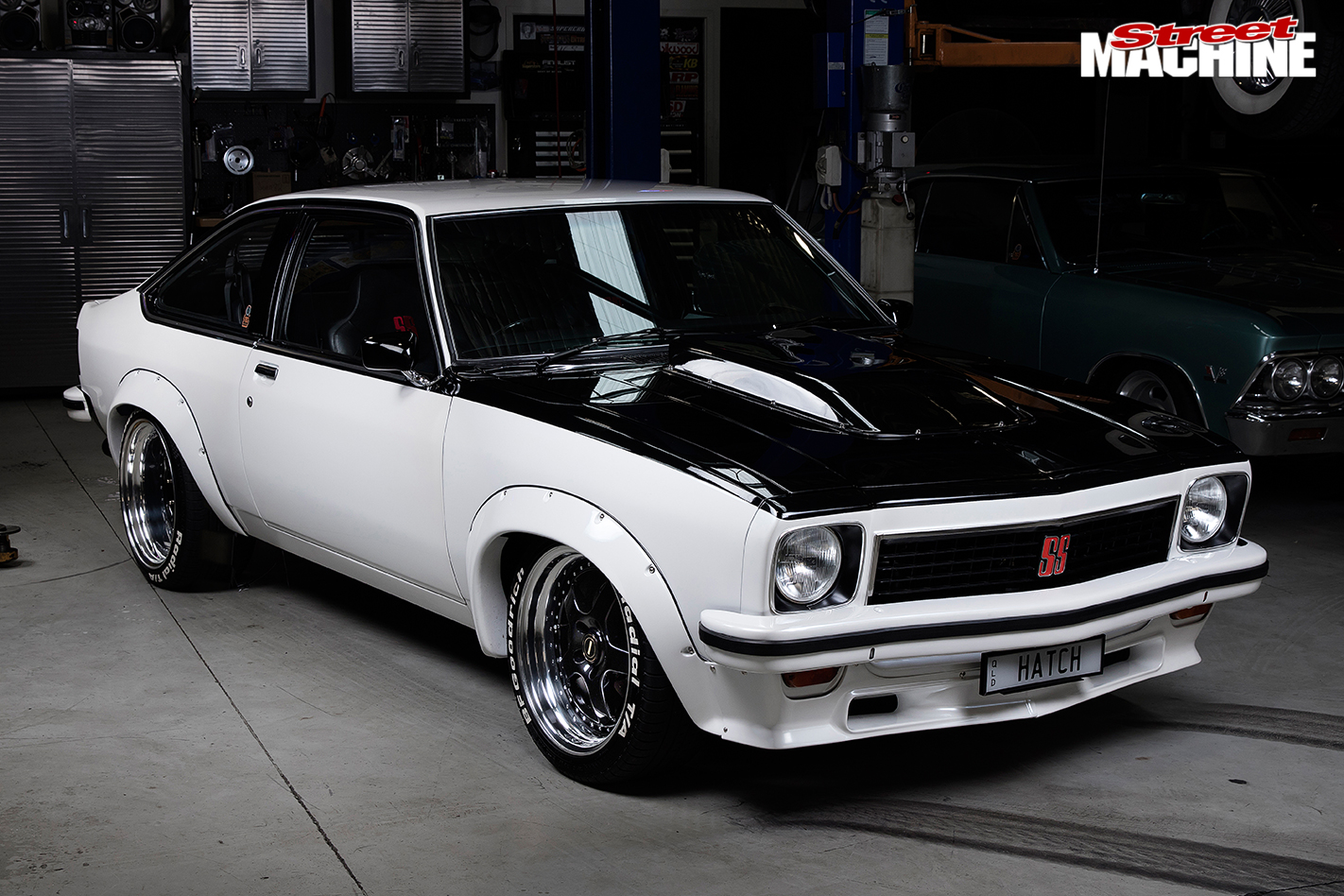 The hatch retains its stock feel thanks to the unmistakeable SS blackouts. They contrast nicely with the flawless white paint on the rest of the body, though you won't find this colour on the Holden charts - it's Suzuki pearl white

When it came to choosing a new powerplant for the hatch, Dave soon heard the sonorous calling of the LS1, so he bought a written-off, low-mileage VY SS ute and carted it and the Torry to John Jones at Rockabilly Restorations in Toowoomba. 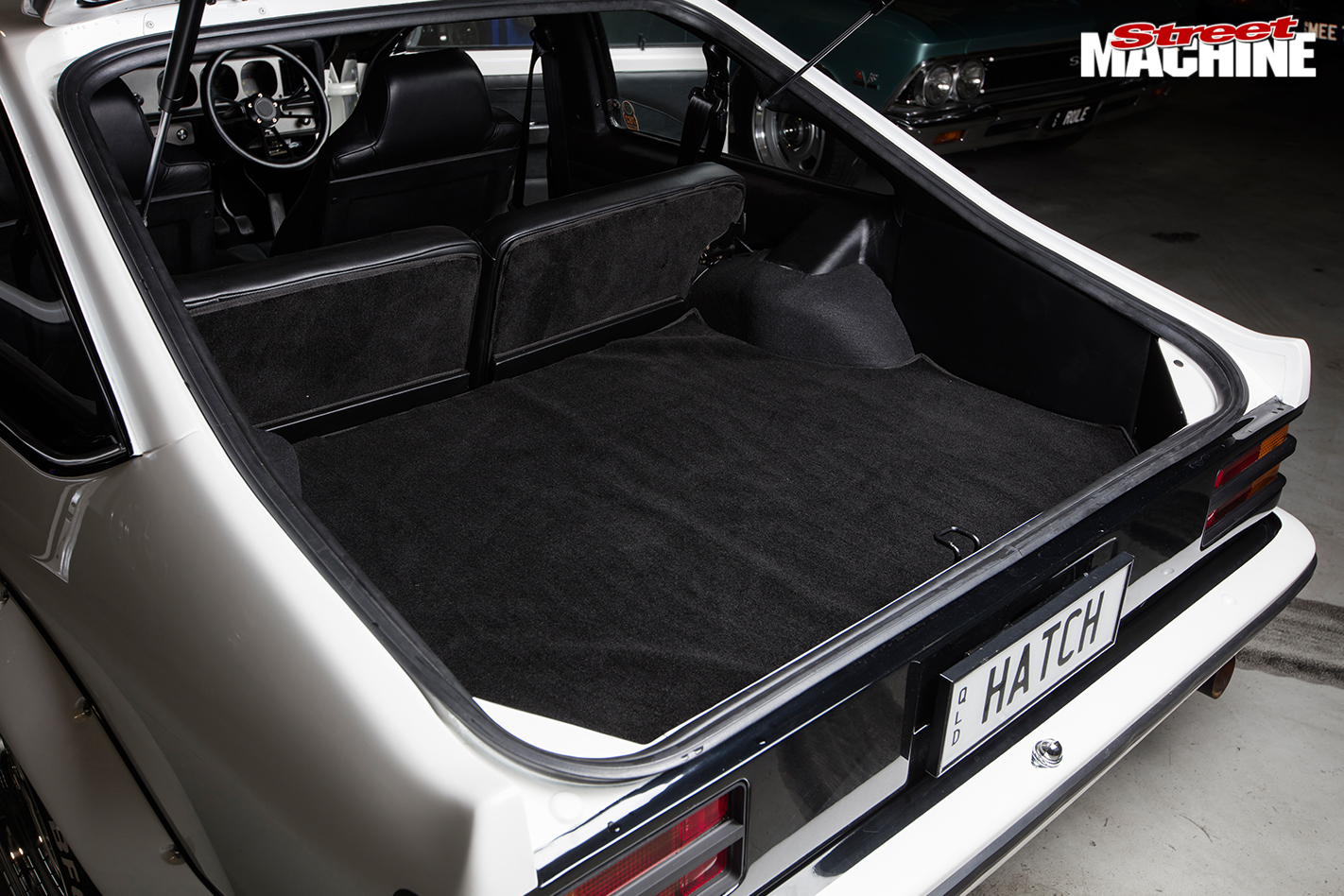 John had done some great work on Dave’s green Torana and he expected no less for the white SS, but fate intervened. “John had a workplace accident; it was pretty bad,” Dave tells us. John is back in the saddle now, but he was offline for some time and the project sat for 18 months. “John called me and kindly suggested that another workshop would get the job done quicker.” 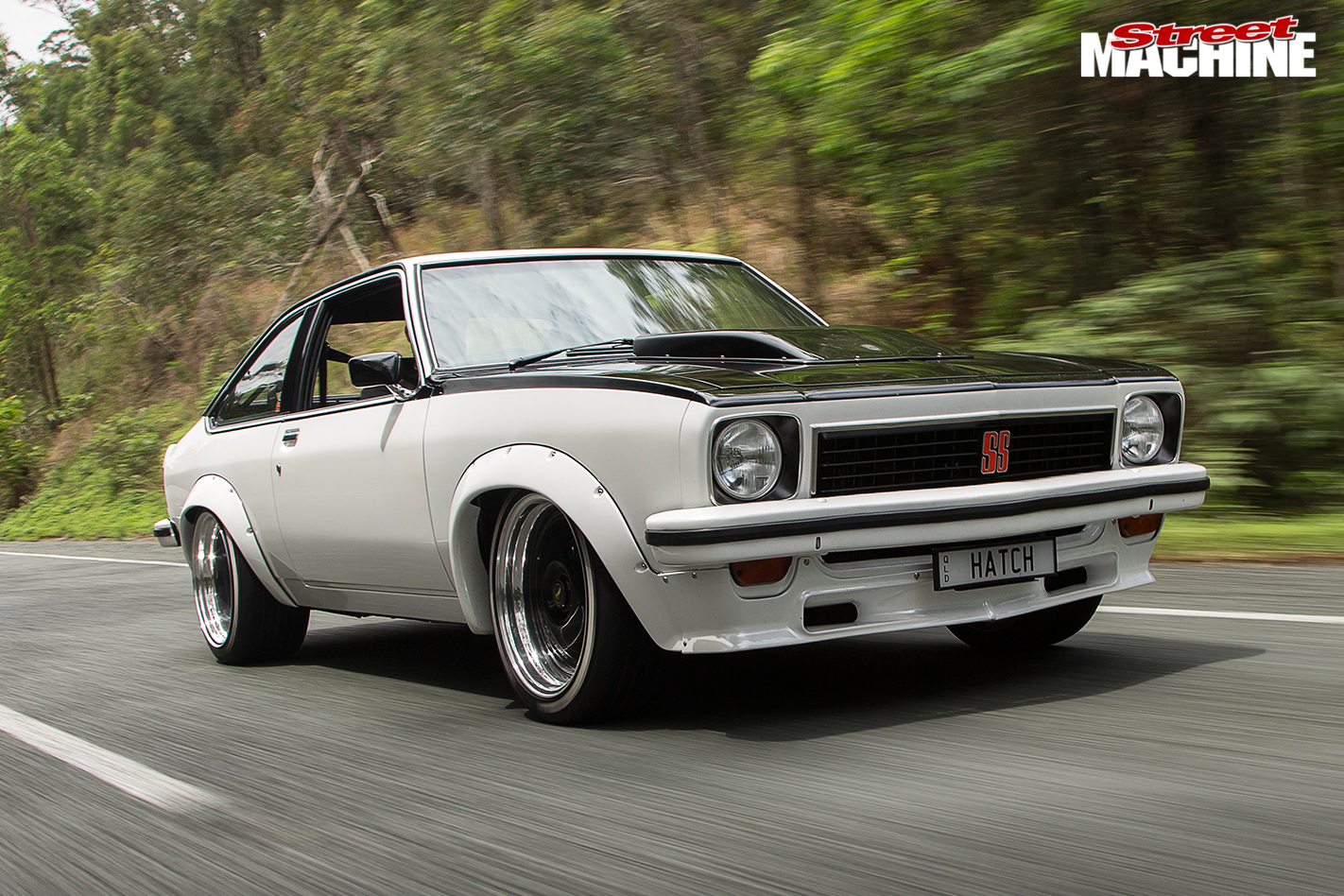 At a loss, Dave thought another hottie might fill the void, so he called into Seven82Motors for a look at an Impala that was for sale. “I noticed their workshop and got talking to Chris Langtry; I described my situation and he was keen to help.” Dave owns a tilt-tray company, so didn’t break a sweat dragging both the disassembled Torana and the wrecked SS ute over to Seven82 to get the ball re-rolling. 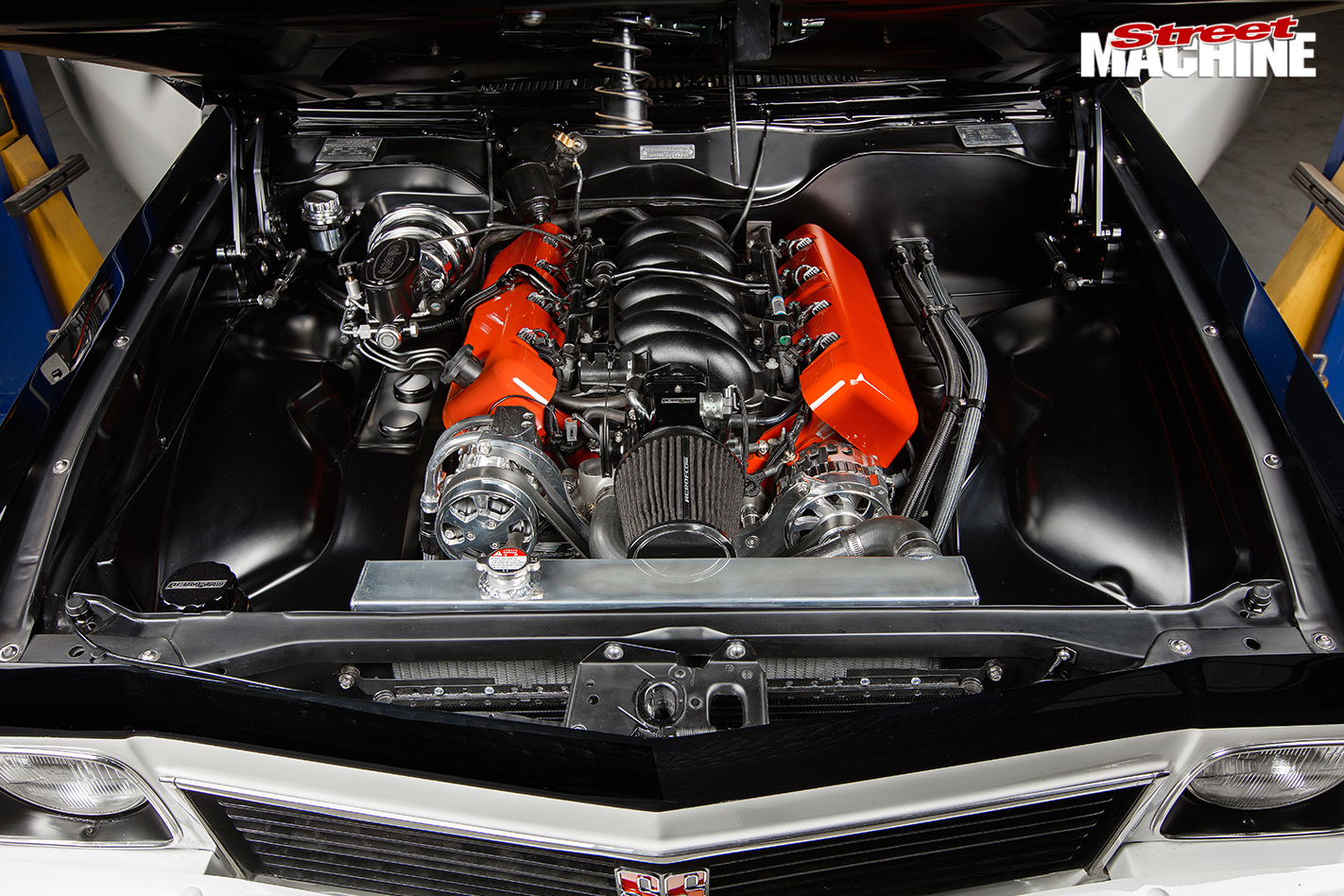 Chris set to work by binning the factory front end and installing a CRS tubular-arm set-up with coil-overs. Rockabilly Restorations had already transferred the VY’s transmission tunnel to the Torana to allow fitment of the T56, but Chris suggested that Dave take it to the next level with a mild smoothing of the engine bay and firewall to better showcase the low-mileage LS1. 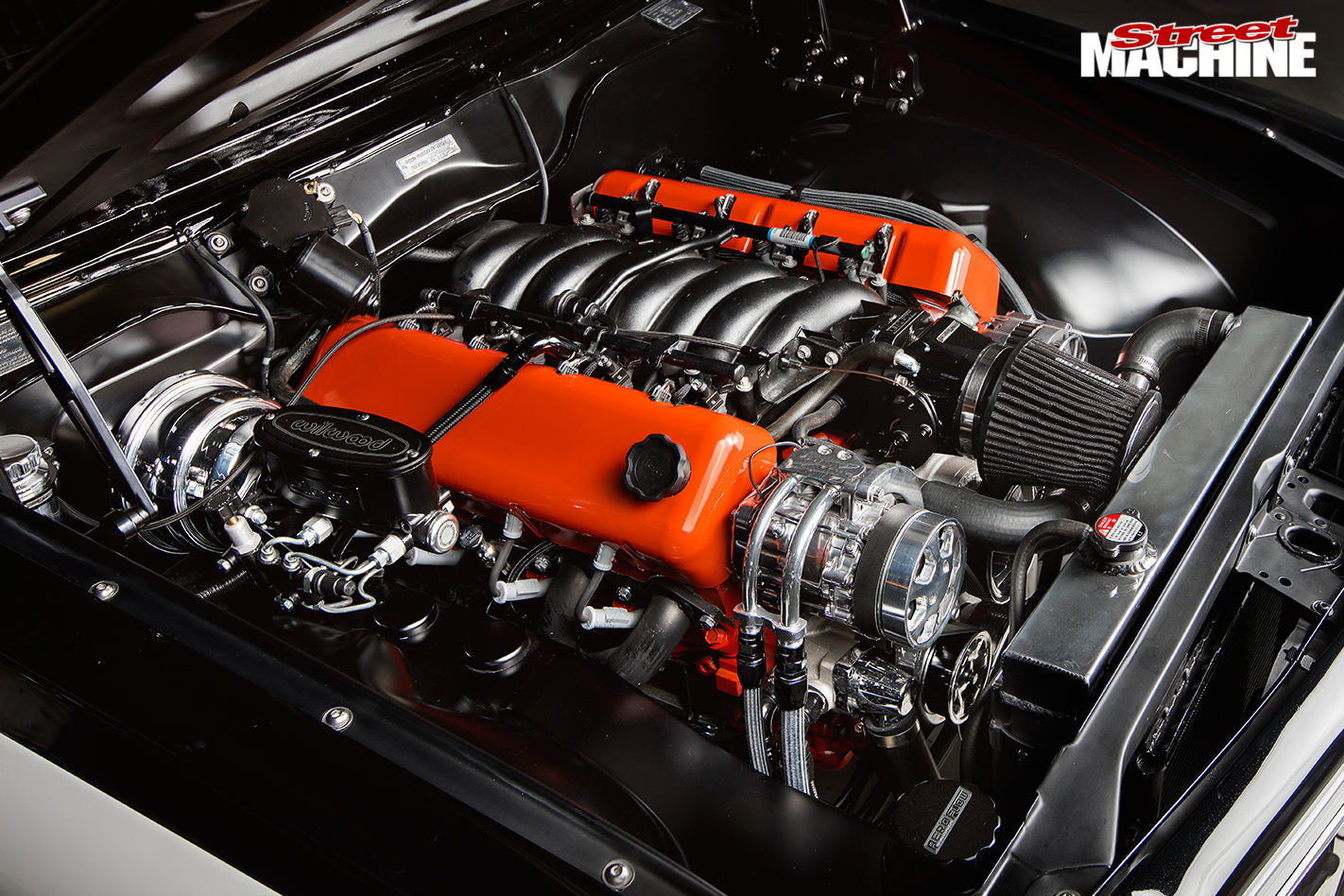 Chris also installed a new cam and valve-spring set, as well as the trick Billet Specialties Tru Trac serpentine pulley. The Torana has hit the dyno, returning a healthy 360hp at the wheels

“We ditched the heater box and installed Vintage Air,” Chris says. “Dave said he wanted to start the thing up and drive to Summernats; the air certainly helps at that time of year!” The pulleys were replaced by a Billet Specialties Tru Trac serpentine system, which tidies things up, relocates the air-con compressor up and out of the way, and looks trick to boot. 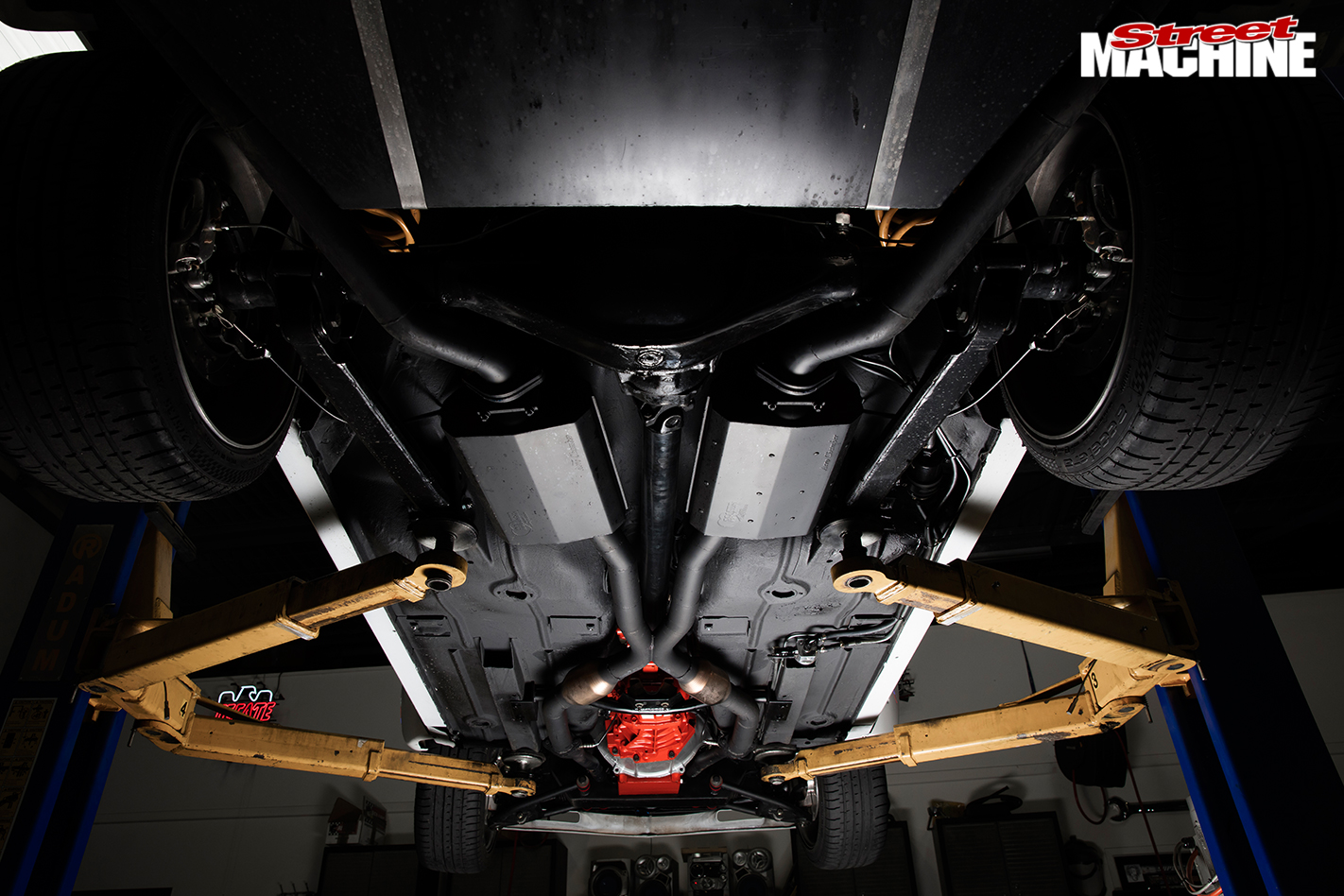 The LS didn’t need a lot of attention, especially as Dave wanted a daily, not a recalcitrant drag car. “We did the cam and upgraded the valve springs; all Comp Cams stuff,” Chris explains. “Plus we put the big throttlebody on it.” But what of Dave’s request to keep it old-school? “We put LS2 coils on it, but only so we could run the retro red Holley rocker covers!” Chris laughs.

Dave did some deals to secure a big-bearing nine-inch diff for the rear end: “I swapped it for the stock diff; I think the other guy got the better deal, ’cos I still had to narrow this one!” Chris at Seven82 ensured the big diff was up to scratch, rebuilding the guts and installing disc brakes. Rear suspension was left well alone, although the factory lower control arms were boxed and the uppers modified for adjustability. 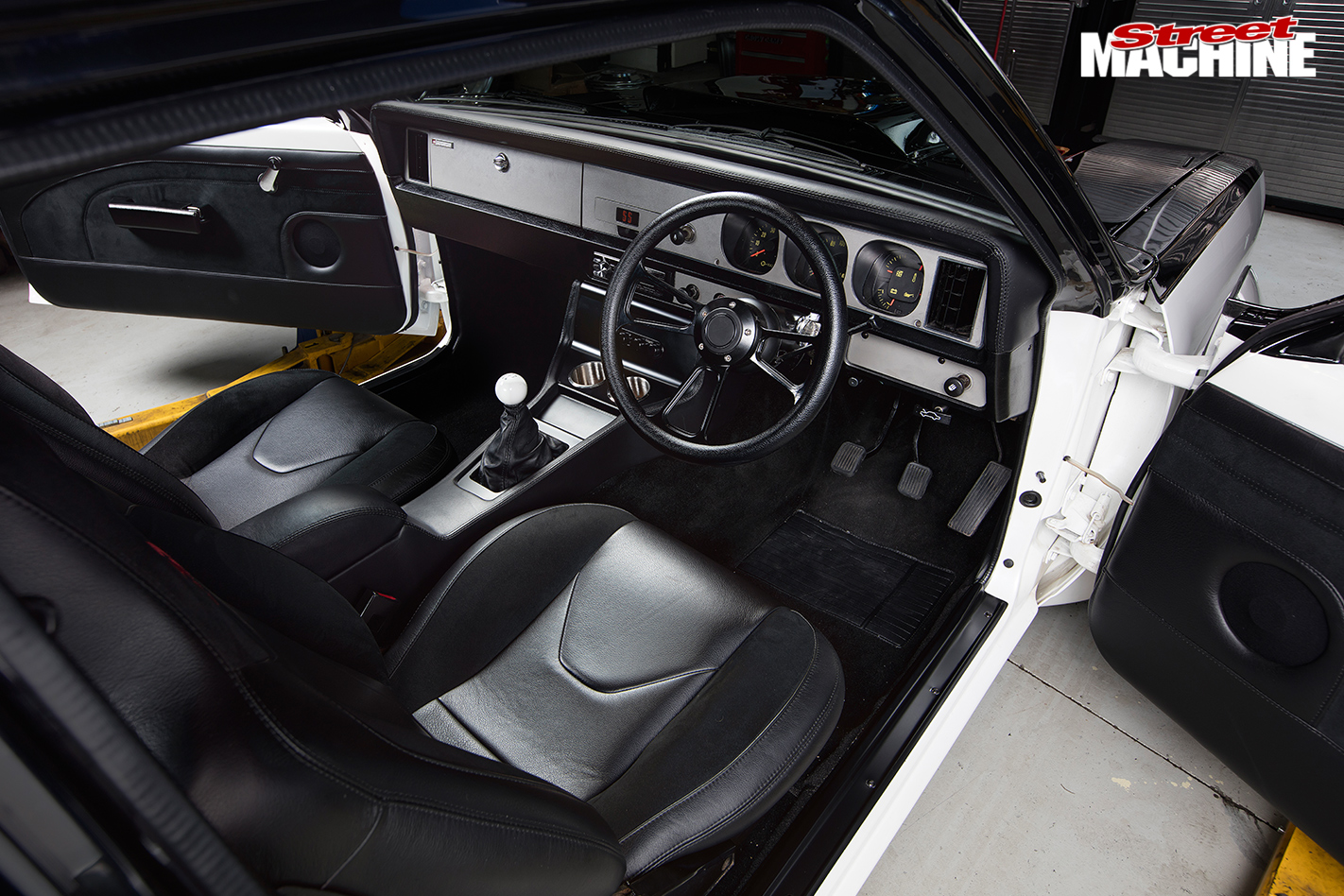 Fabrication guru Adrian at Seven82 widened the console to suit the larger VY SS transmission tunnel and grafted in an HZ Kingswood rear section, including armrest

The boys at Seven82 are always up for some metal fabrication and mechanical work, but farmed the paint out to Brothers Speed Shop in Ormeau. A bare-metal job seemed like overkill on a hatch this nice – a compliment to the previous owner – so Brothers tidied up the body and laid on a Suzuki-sourced pearl white, contrasted with straight gloss SS blackouts. 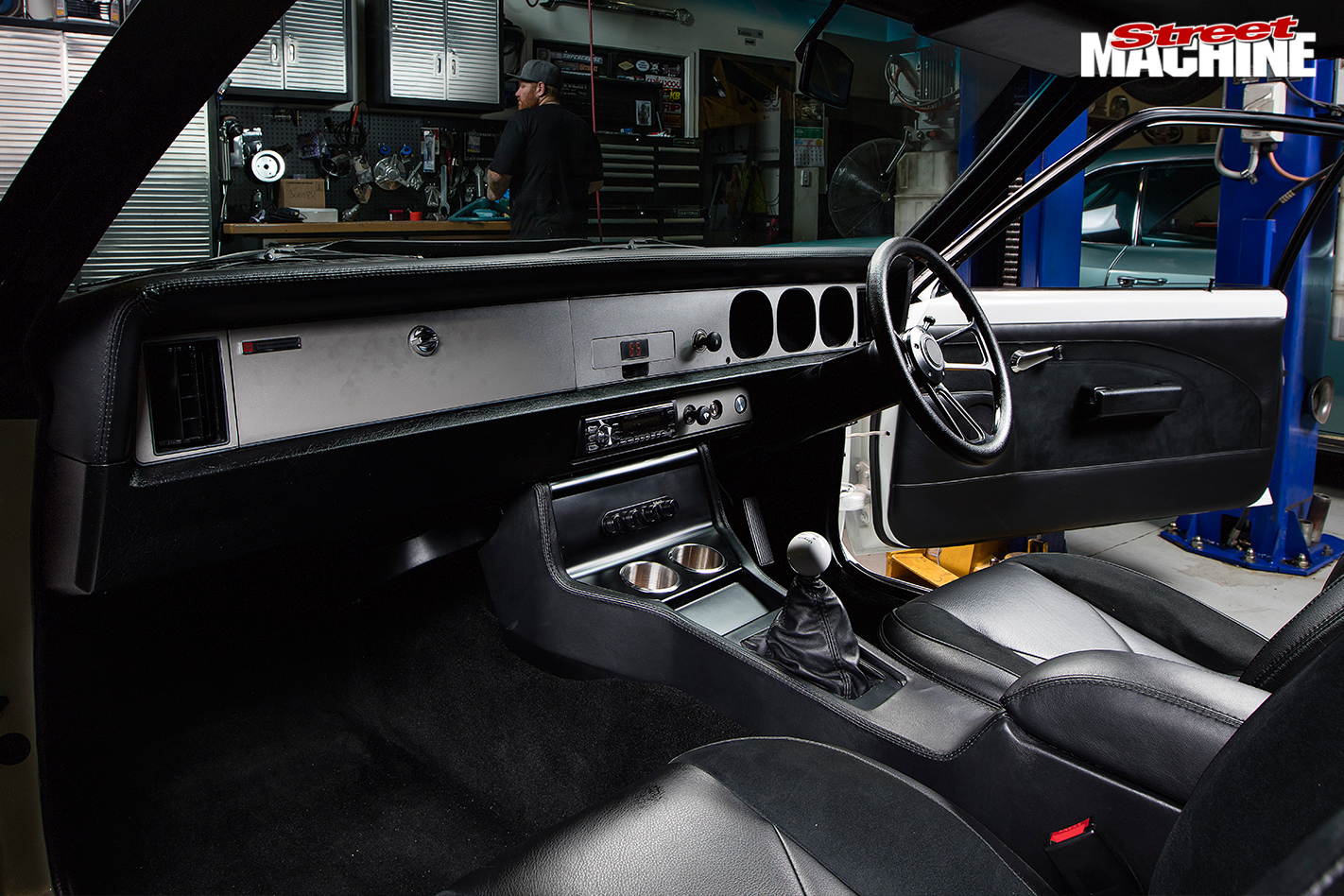 Trim work was handled by Trim FX in Arundel under direction from Chris and Dave, and they agreed on an original-style look without being enslaved by tradition. Factory seats were re-bolstered and subtly re-shaped, then re-covered with leather and suede in a design that mirrors the trim on Dave’s wife Suzzie’s VF HSV. “Dave’s main stipulation was it had to have SS in the seats,” Chris explains. 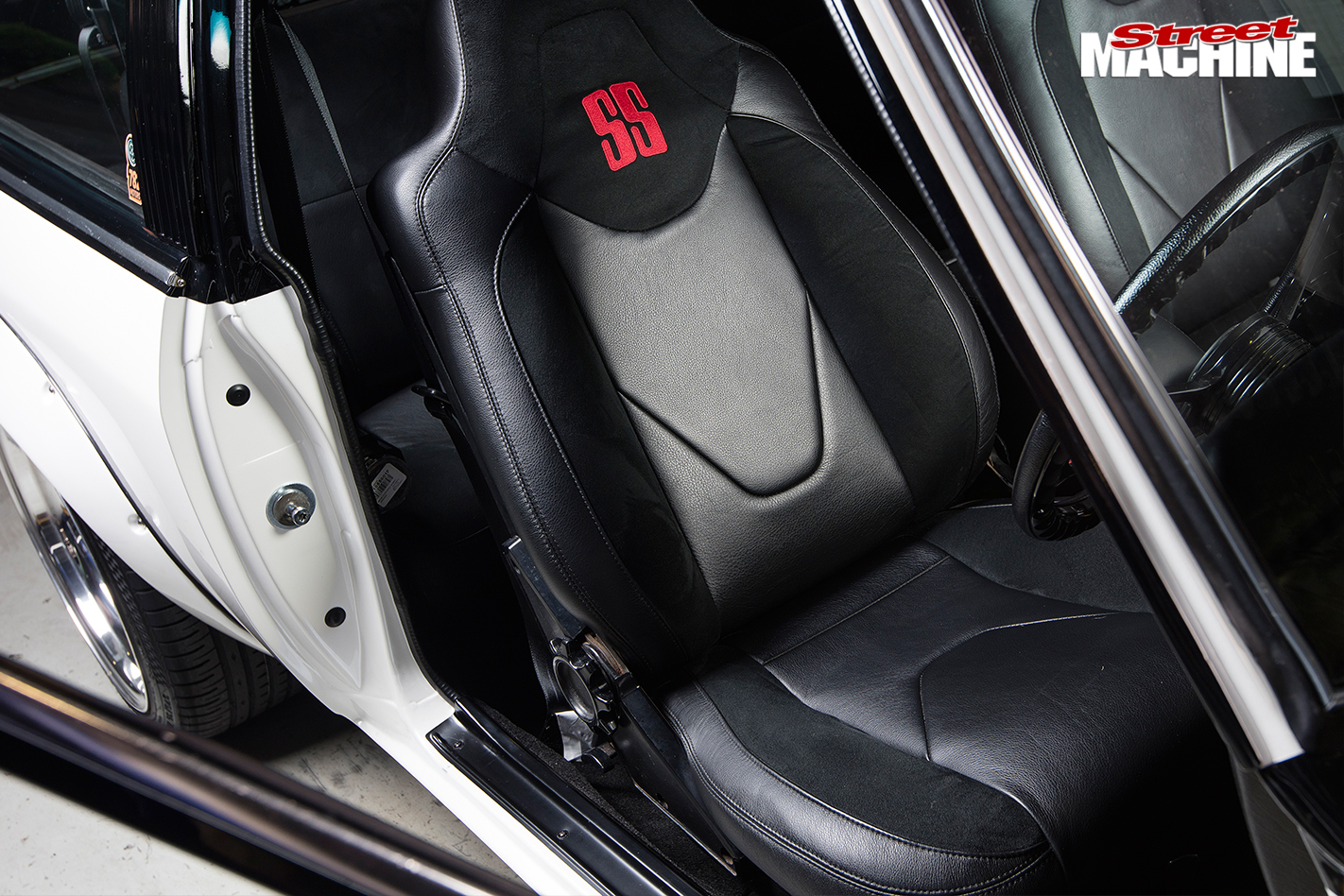 With a leather interior, full console, remanufactured factory gauges and working air conditioning, the Torana is now a nice place to be, and therein lies its appeal: Dave wanted a car he could fire up and hit the road with, not warm up and swear at for half an hour. The venerable LS engine makes light work of frequent drives and does so without compromising power.

As for the cantankerous 350 that started this whole process off, has Dave given it the Gumtree treatment? “Nope, still got it. I put it in an HZ ute!” 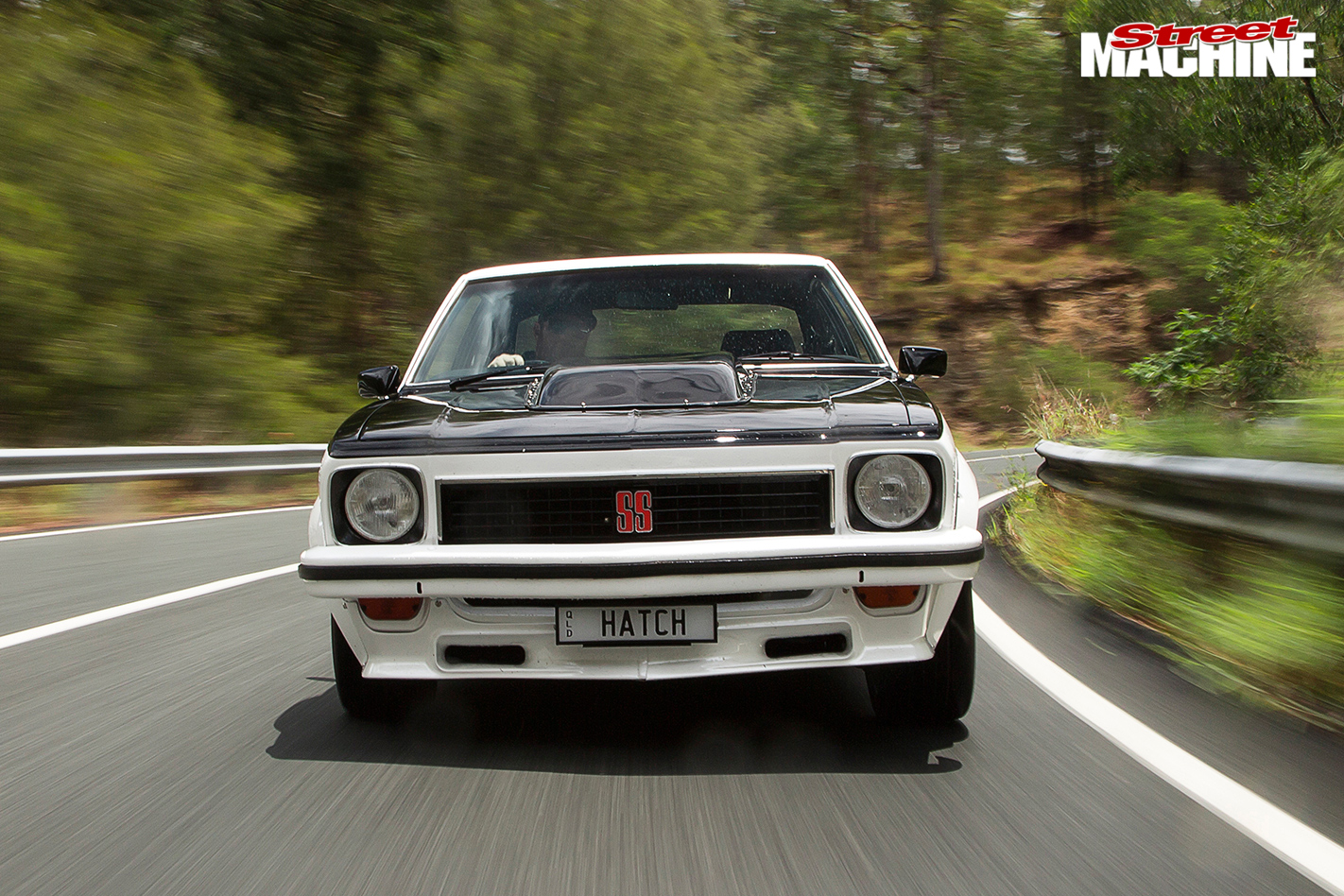