NOT everyone has a fat stack of cash to spend on modified cars, and it always amazes me what some blokes are capable of with sheer determination and a little (or a lot) of lateral thinking. Take West Aussie Jason Berard’s Torana, for example, which is actually a UC that has been converted to an LX! 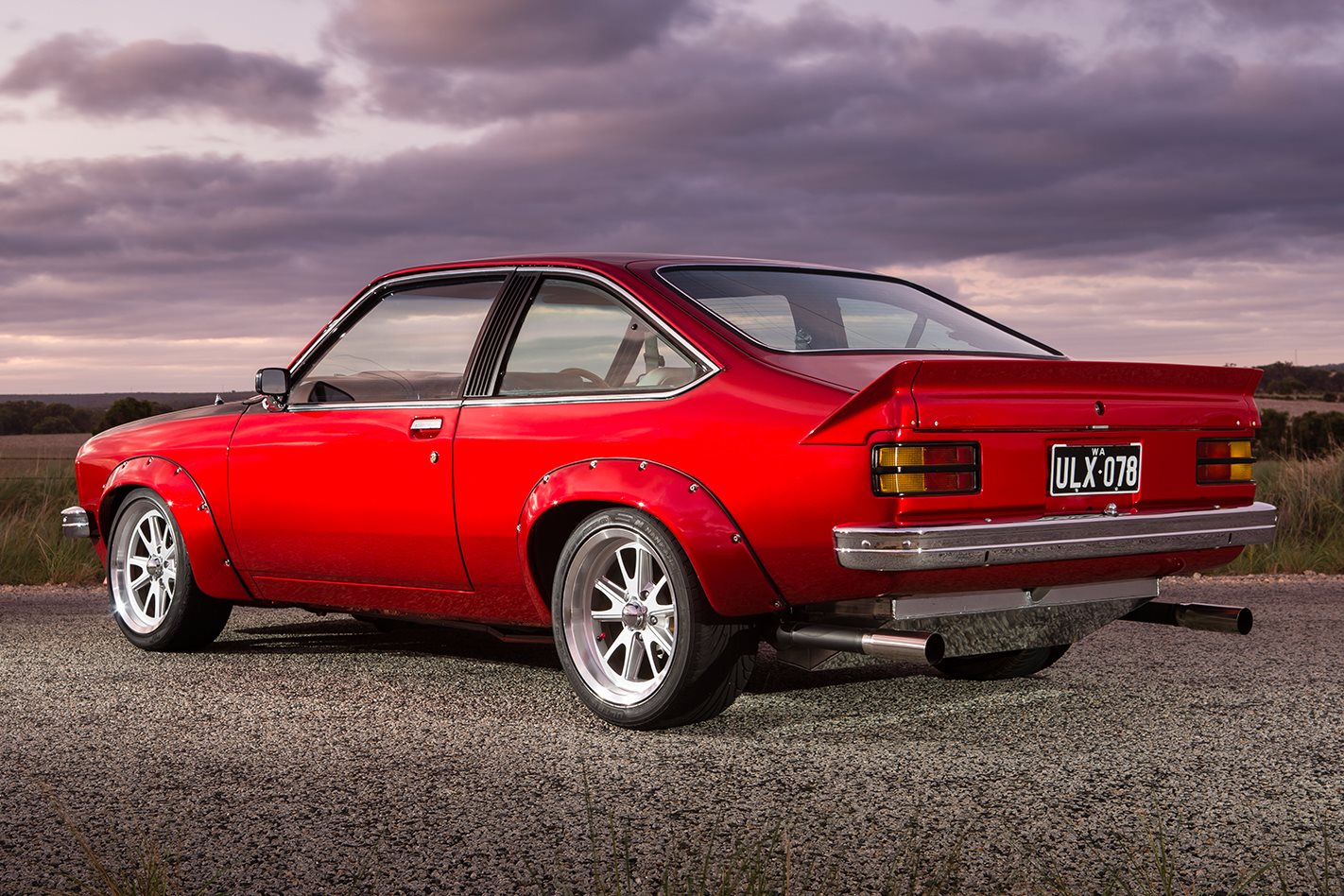 You see, 25 years ago he was cruising around in an LX Torry, and like a lot of people back then, he sold it for next to nothing. These days, with three young kids to feed and with the prices that some of the hatches are fetching now, purchasing another one was pretty much out of the question. What Jason could afford, however, was a basket-case UC Torana that came with a rear LX cut, LX dash and front guards. The UC needed the back half of the roof replaced – it was full of newspaper that had been bogged over – the passenger rear quarter had taken a substantial hit, and someone had thrust a star picket through one of the guards. 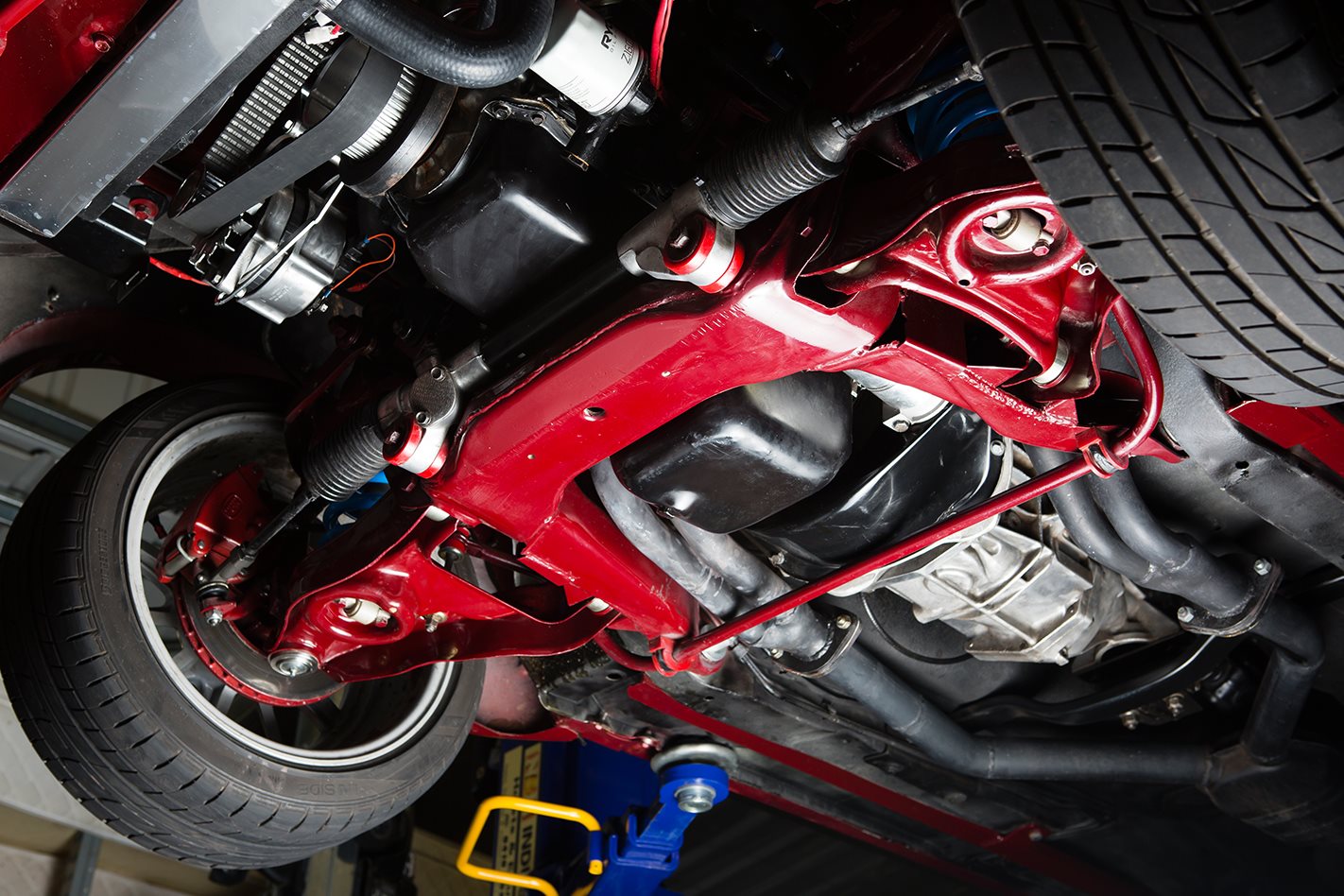 Undaunted by the Torana’s exceptionally poor condition, Jason enrolled in a number of classes at a local TAFE. “The main objective of this build was to learn how to do everything myself,” he explains. “I attended night classes after work, and over the next few years I learnt how to use all the tools. The classes covered panel fabrication, paint, heat shrinking, panel pullers, dollies, oxy, MIG-welding and TIG-welding.” 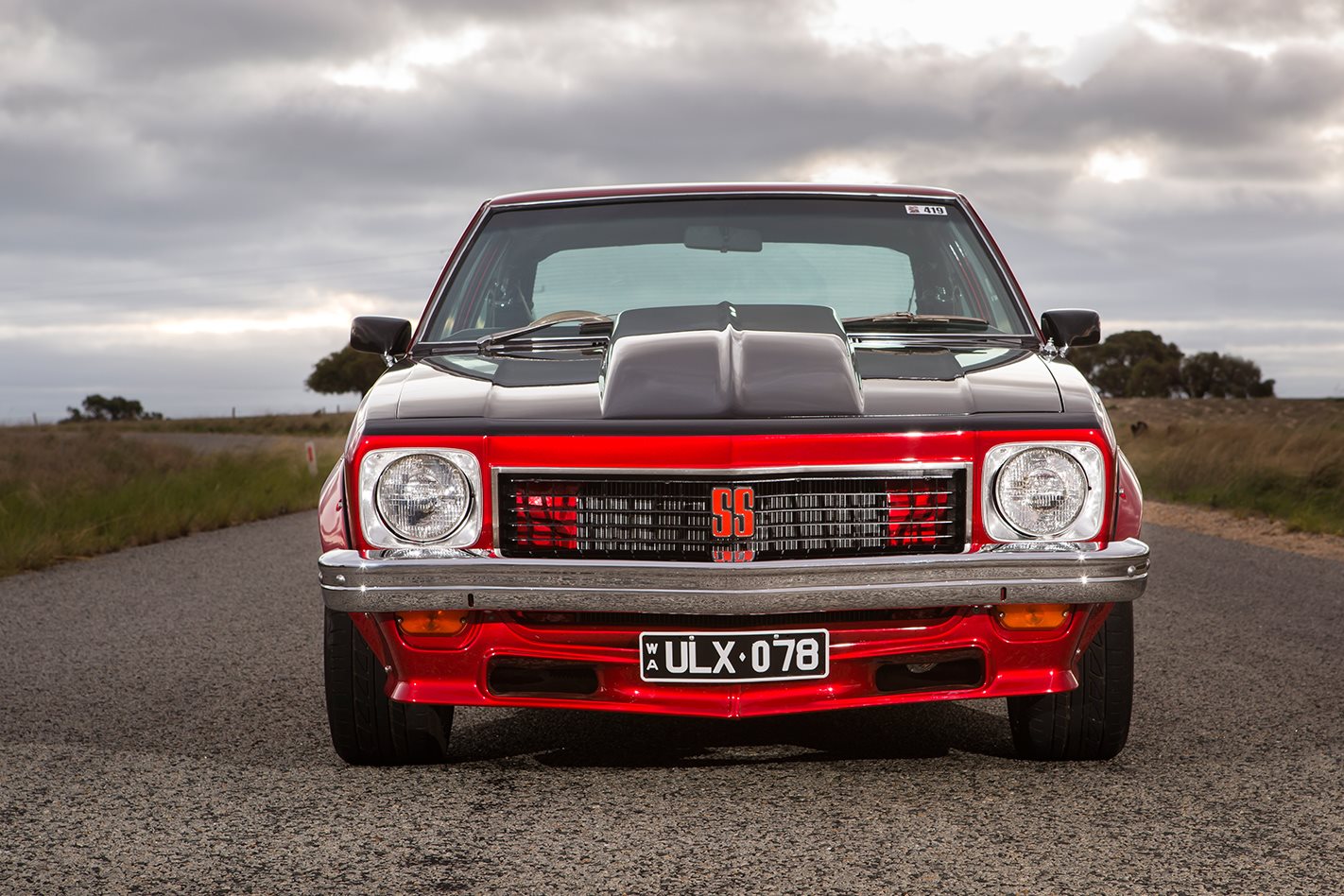 With good mate and teacher Stewart Parris overseeing the panel and paint, Jason set to work with his newfound skillset. “Basically every panel from the firewall forward was removed and replaced with the LX stuff – that is the inner guards, radiator support, nosecone, quarters and even the bumper,” he explains. The creased quarter with the star picket hole was also coaxed back into line thanks to two blokes and a crowbar, then heat-shrunk until it was baby smooth again. At the rear of the car the newspaper filler was replaced with fresh tin, and the LX tail-lights were grafted in. A four-inch full-length fibreglass reverse-cowl scoop was bought from eBay, which was then cut down to the factory height and ’glassed on to the steel bonnet. A set of A9X flares were also sourced and fitted, along with an A9X front bumper. 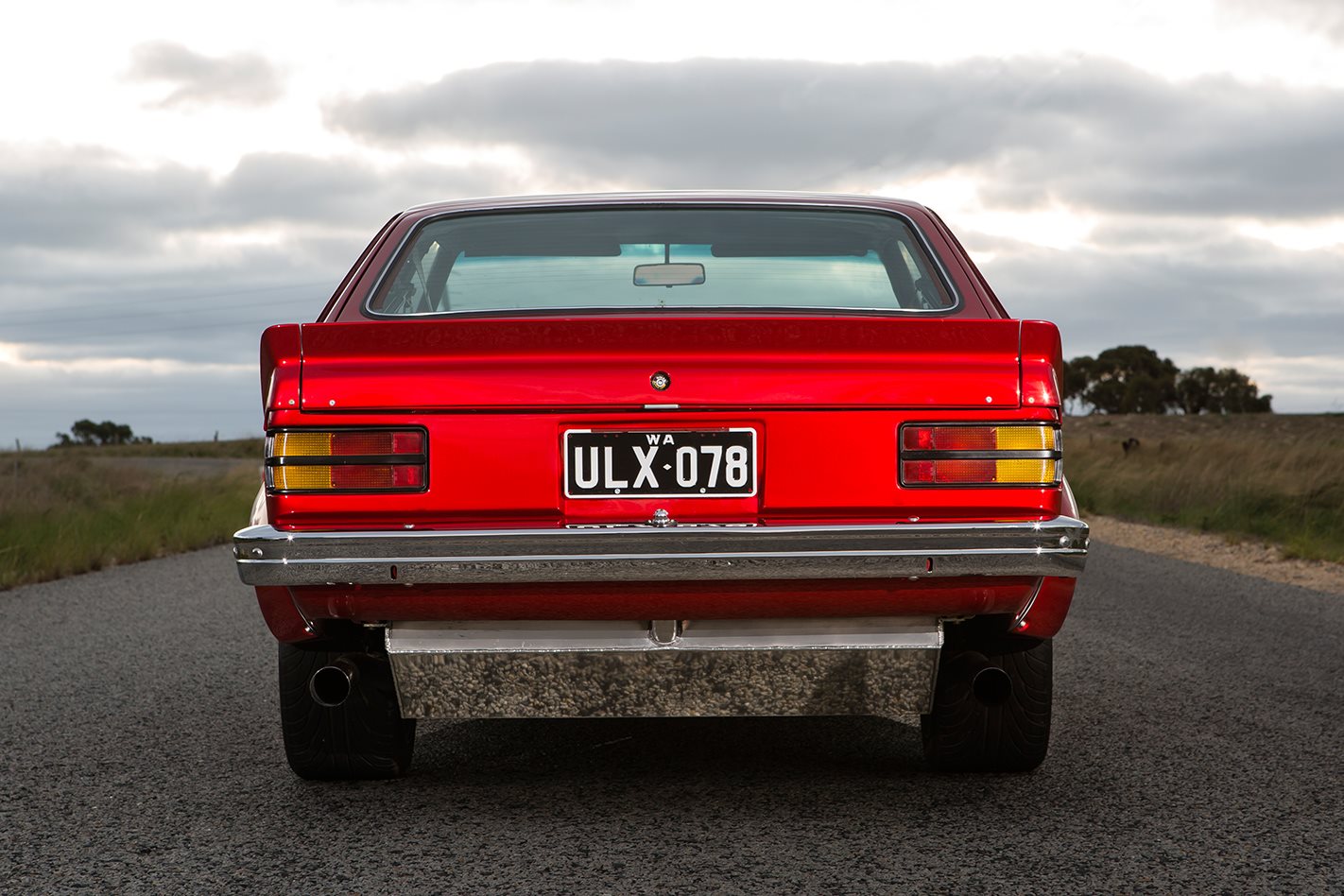 “Of the few UC/LX conversions I have seen, not many guys swap the dash out, but I was determined to make that happen too. It was a bit tricky, and I set my pants on fire welding it in, but I got it in there in the end!” Jason laughs.

With the panel work now taken care of, Jason set his sights on tackling the paint, again with Stewart Parris overseeing the process. “I was able to use a rented paint booth, and we sprayed a few test panels to find a colour in a candy that I liked,” he says. “It had to be red, and we eventually settled on PPG’s Mazda Soul Red, with a copper basecoat. We tweaked the colour a little, making it brighter so it really pops in the sunlight.” 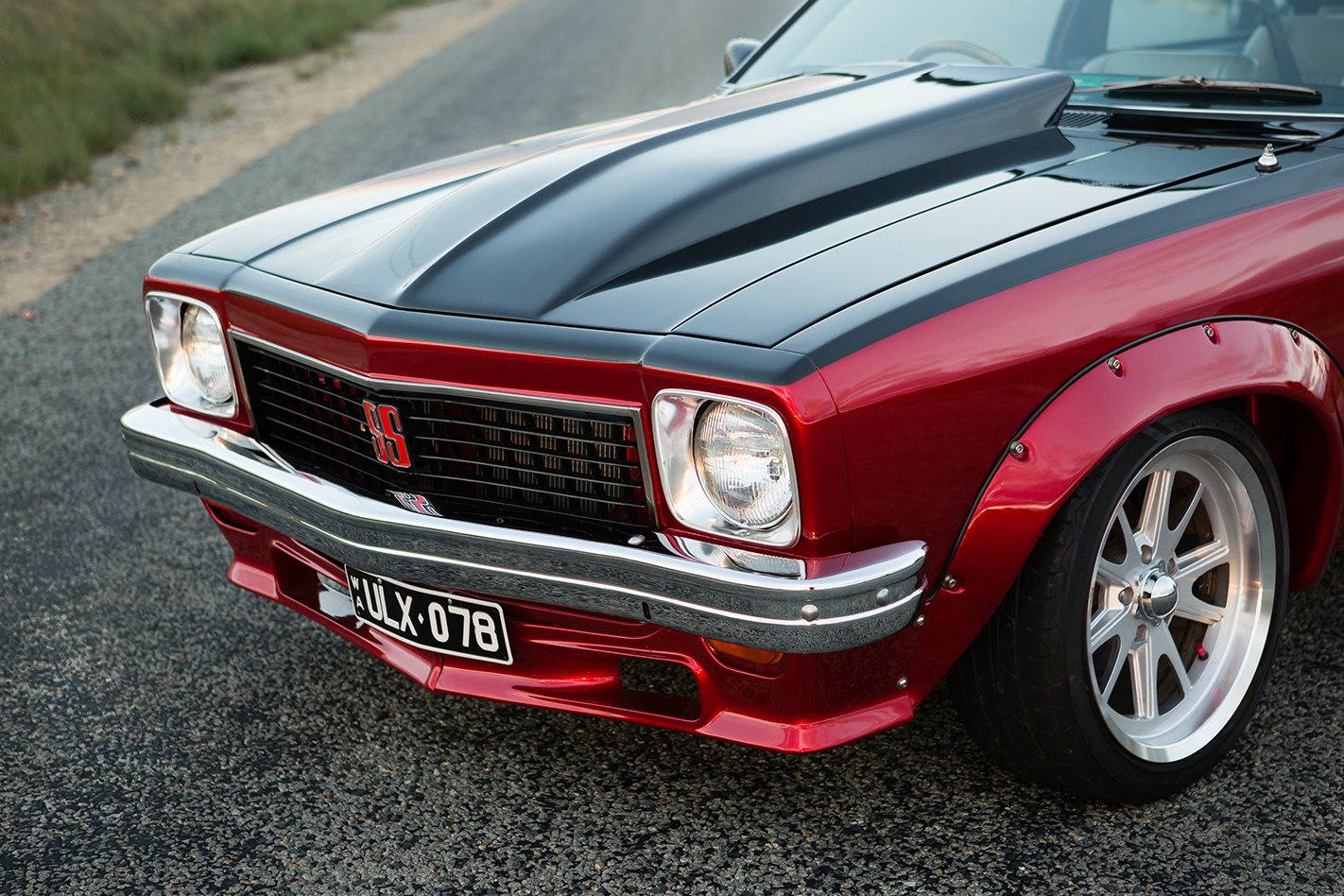 With the project now looking a whole lot better than what Jason started with, he turned his attention to the driveline. “I bought a VN donor car that had a 5.0L and a five-speed in it,” he says. “I pulled out all the running gear and the brakes, then sold the rest off.”

Nathan Kempe was the man responsible for teaching Jason how to rebuild an engine, and with his supervision Jason stripped it down and built it back up again. Not wanting to get too serious with his first engine build, Jason kept it mild and filled the VN SS 5.0L block with Hypatec pistons, a Crane hydraulic cam, a port-matched Harrop dual-plane intake manifold and a 600cfm Holley carb. An HQ sump was also fitted to allow plenty of clearance to the UC front end. 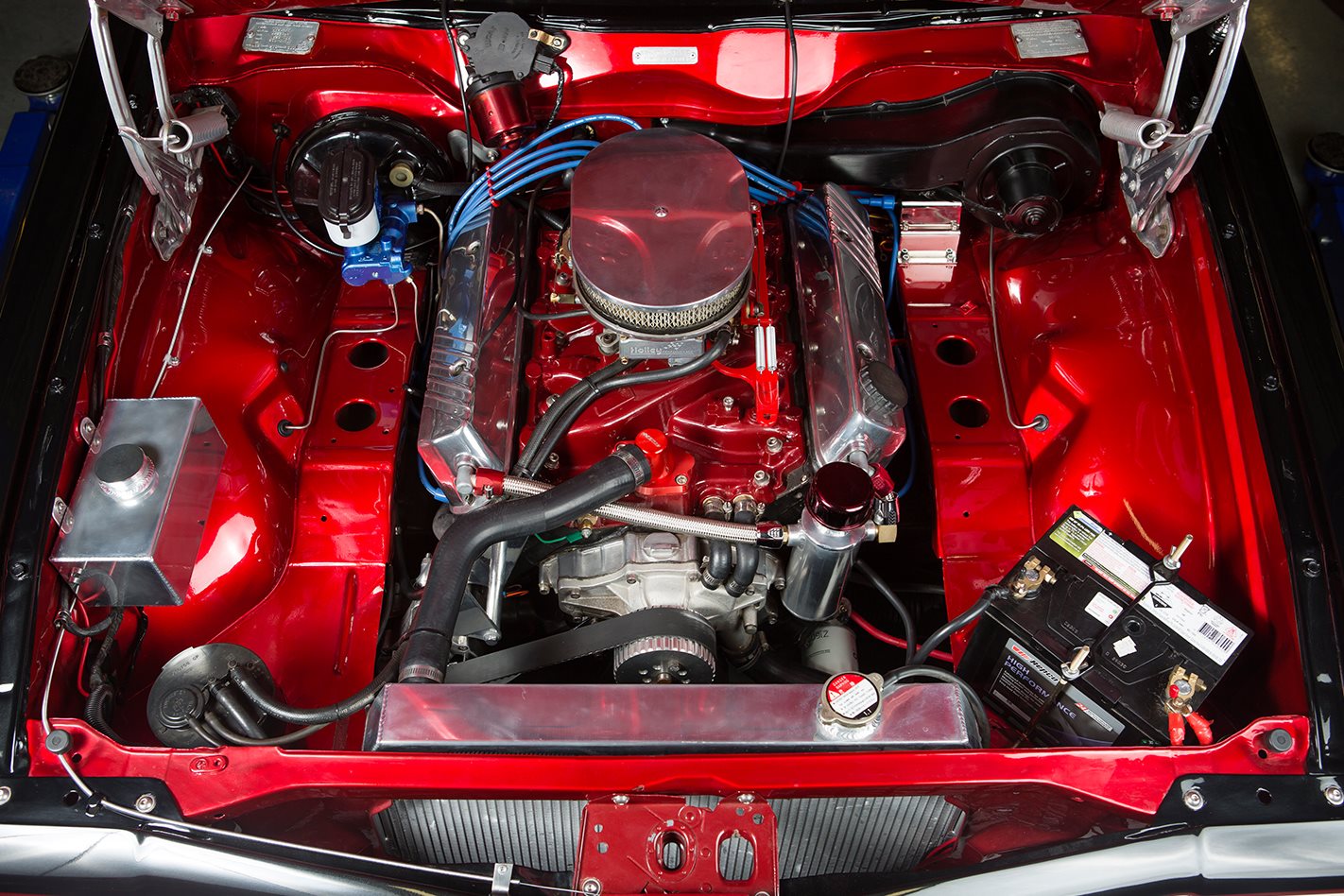 The shifter on the VN five-speed was proving difficult to fit in to the Torana’s trans tunnel, so after a little bit of research Jason swapped the VN ’box for an EA Falcon T5 , which has the shifter located 100mm further forward and therefore lines up with the factory location in the Torana’s trans tunnel. A Dellow bellhousing adapts the 5.0L to the gearbox, while a two-piece UC tailshaft hooks it up to the strengthened diff from the VN.

The Torana purists might not agree with Jason’s choice of wheels, but he doesn’t care. “I had a set of Dragways fitted, but I just didn’t like them,” he says. “I’m a bit of a Gone In 60 Seconds fan, and I love the Eleanor Mustang wheels, so I grabbed a set and threw them on. I reckon they really suit the look of the car, and they suit the era too.” 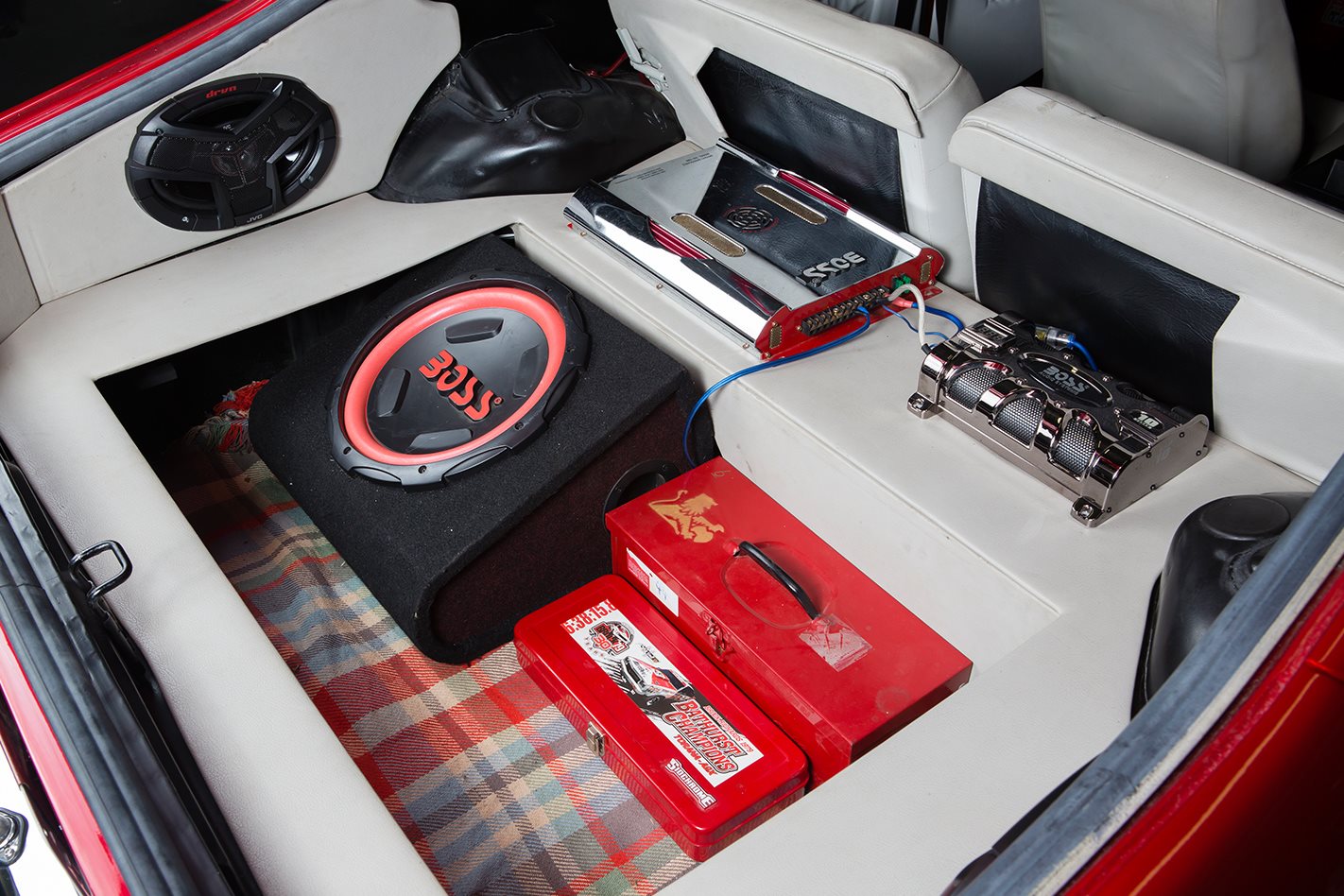 In keeping with the theme of saving a few bucks, the interior is pieced together from parts that Jason found while trawling for bargains. “I bought the steering wheel at a garage sale for $10. It was painted black, but once I stripped it back I found that the woodgrain underneath was mint! A coat of polyurethane had it looking like new again.” The Dove Grey leather seats may look familiar to SM readers with a keen eye – and that’s because they are from Dave Cleary’s twin-turbo XXXLS2 Torana (SM, Jan ’10). Jason bought the rear seats from the new owner of Dave’s hatch, and by chance found an ad on Gumtree for a ute with the matching front seats in it. A deal was struck and the front seats were soon his, but in an even more unlikely turn of events, it turned out one of Jason’s clients had the door cards from Dave’s Torana as well! 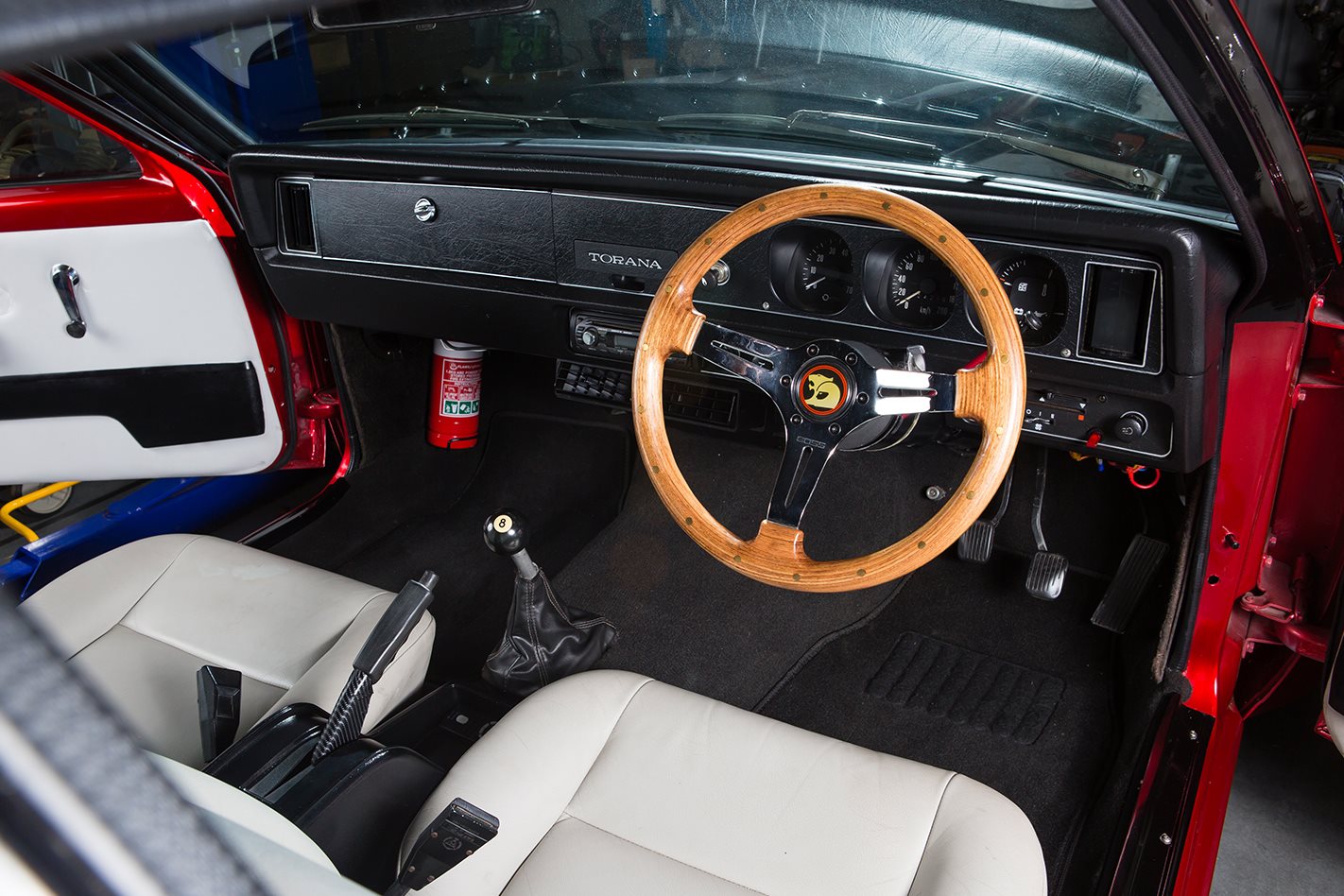 When it came to wiring the car, of course Jason wanted to do it himself too. Luckily his neighbour Gareth Walker was able to teach him how to read schematics and fault-find. Jason used a combination of three wiring harnesses to hook everything up, including the sound system with a couple of JVC speakers, a 1000W Boss sub and amp. 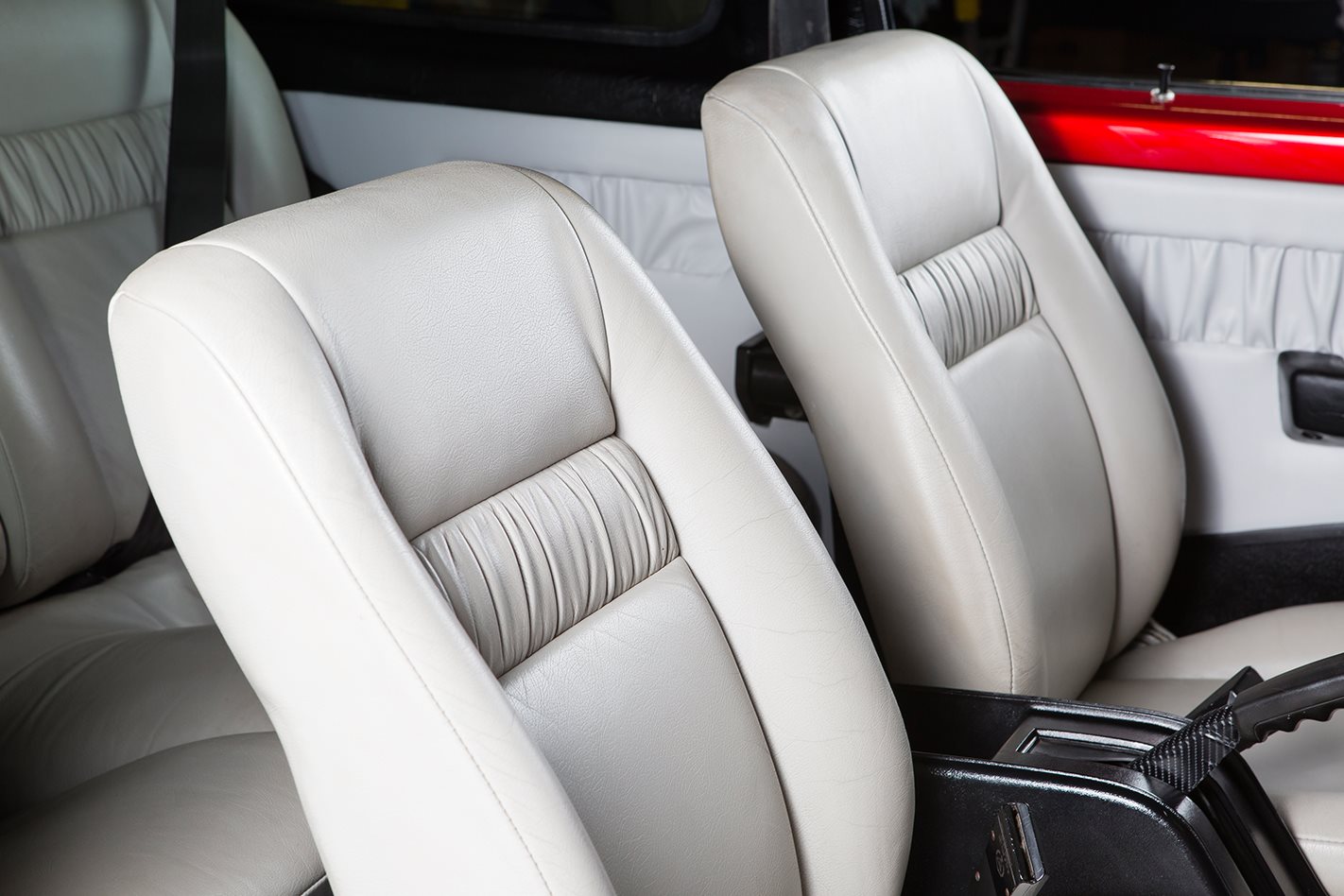 The final hurdle for Jason was getting the car over the pits. There were 22 defects to be corrected, but two days later he was back again. “They just picked on small things like washers and other bits and pieces – nothing too serious,” he says. “When I went back the second time the inspector told me the car was stolen! Luckily he was just having a laugh, and after six years the Torana was finally licensed.” 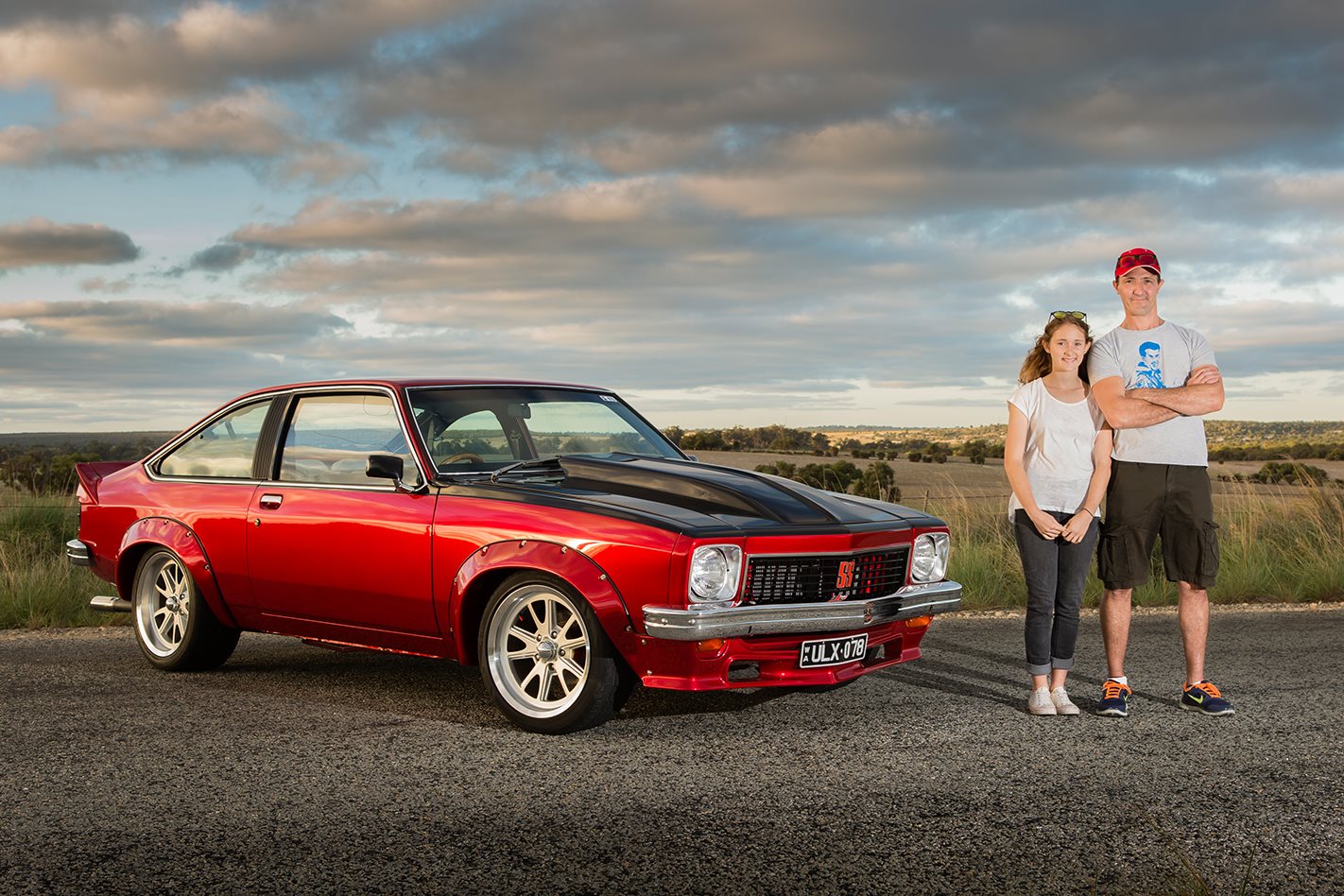 So now that the mammoth job of rebuilding the Torana is complete, what’s next for Jason? Well, he reckons a 355 stroker and a ProCharger are on the cards, but not before he finishes the basket-case HT Monaro that he has tucked away in his shed. If his Torana is anything to go by, the HT will be a very interesting build indeed!