WHILE we love to reminisce about the good old days, the truth is that we’ve never had it so good, especially when it comes to performance cars. Just check out what’s available on the showroom floor these days; supercharged HSVs and FPVs with so much horsepower they’d wipe the floor with any classic muscle car you care to name. 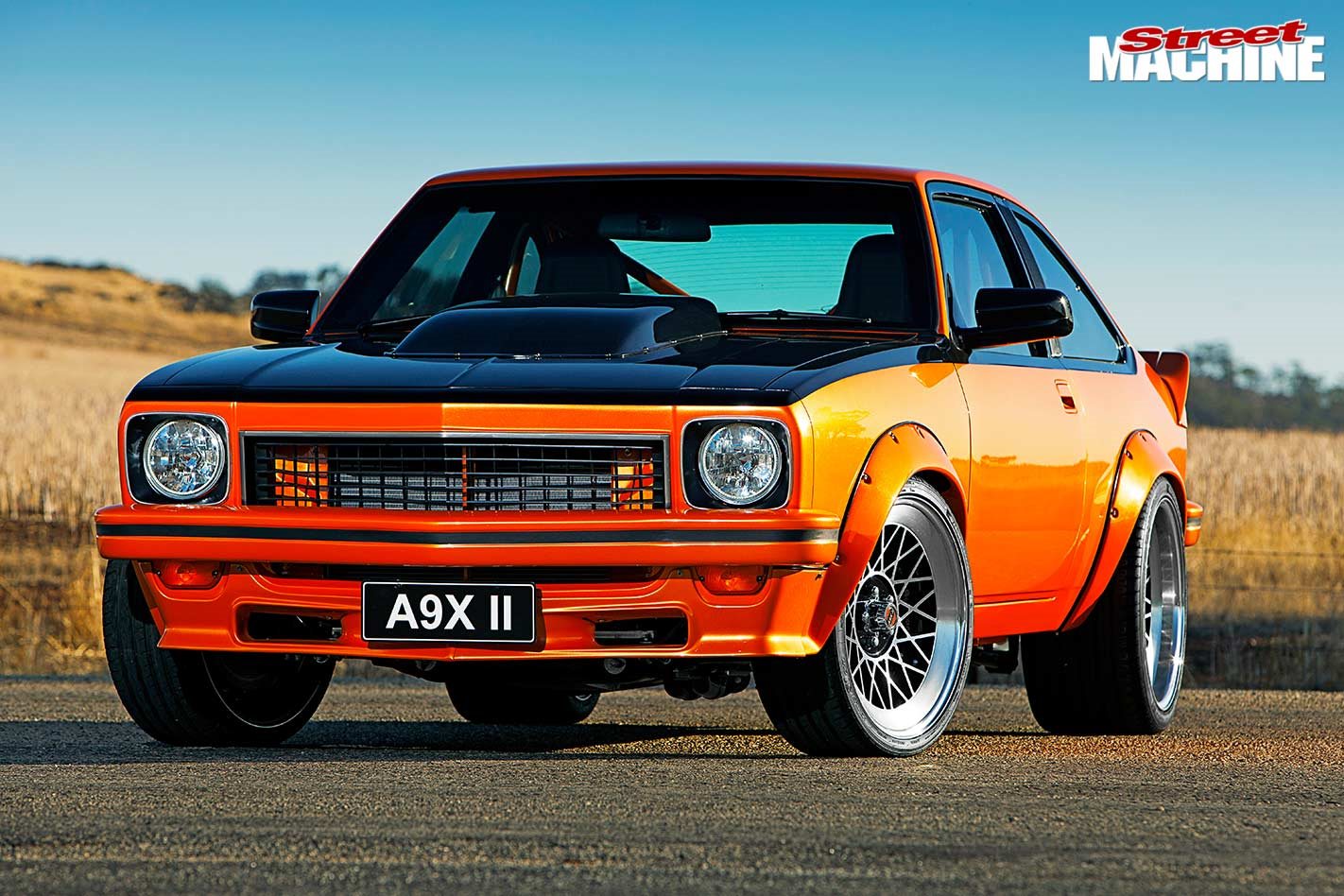 But along with all the extra grunt they’ve gained, there’s no hiding the fact that they’ve also porked up. If only there were a way to combine modern dynamics with the classic muscle car style.

Mark Else had a vision along those very lines, and he’s been turning dreams into reality at Mark’s Workshop in Western Australia for years. You may remember his blown LS1-powered HZ Sandman ute (SM, Jun ’07). This new car moves the concept along several steps.

“It was an idea we put forward of basically making a supercar out of an Aussie muscle car,” Mark says. “The concept was high-tech engine, big brakes and wheels, suspension and all that gear — but not the normal ‘bolt in some HSV stuff’ build.” 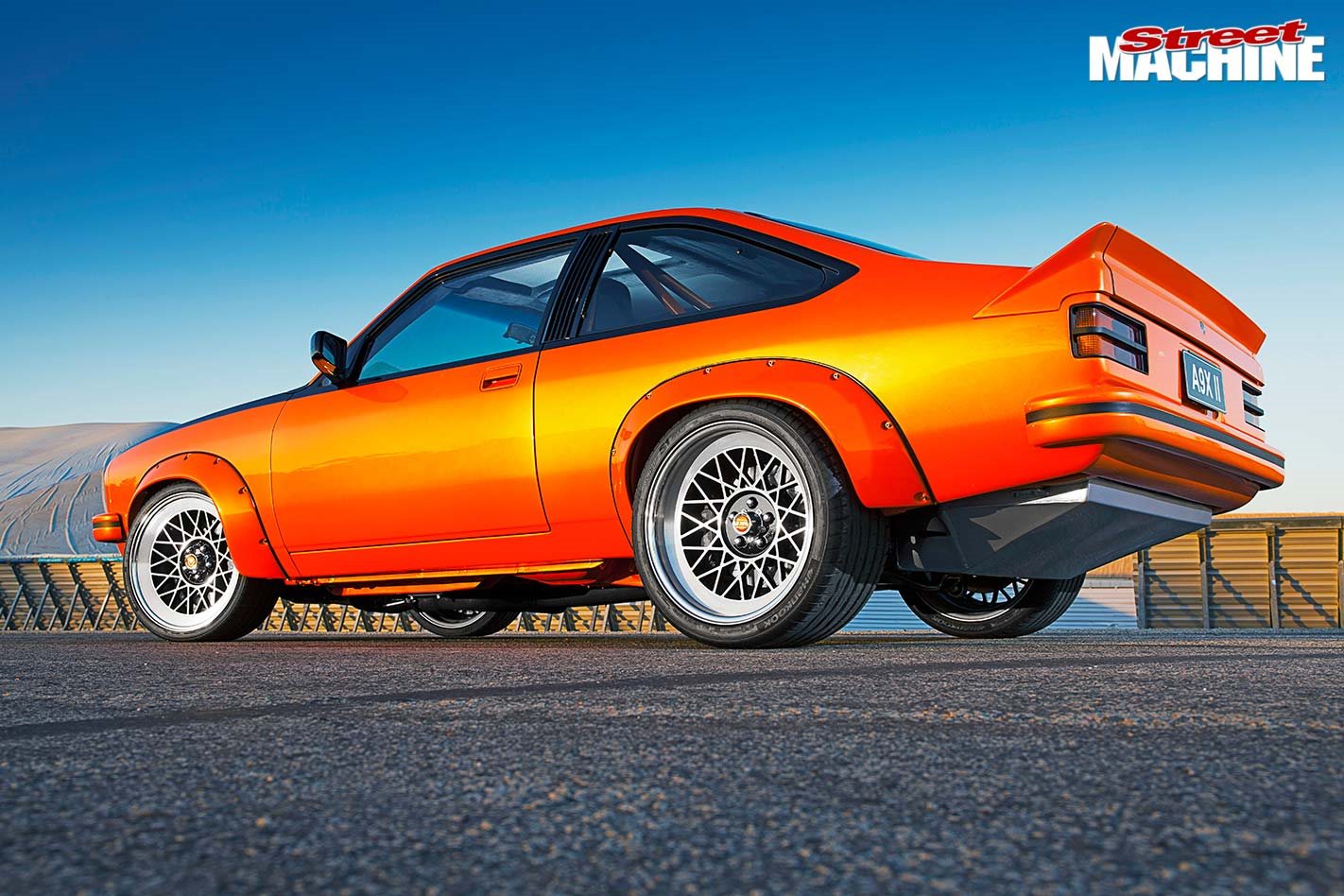 The fit-up of the flare kit is impeccable, with the rear guard openings reshaped to clear the big rear rubber. Other subtle exterior mods include VS door handles and VY mirrors

David Heaton is a man with a stable full of nice rides and he’s a big fan of Holden’s classic A9X hatchback. It was inevitable that he’d take the bait.

“The Torana had always been the dream; it was the car he’d had as a young bloke. The dream was what he was interested in; the existing features of the Torana — driving one, the dash — were not things that turned him on at all. It was all stuff that was in the mandate to change.”

With the go ahead to get things moving, Mark started looking for a suitable base but David surprised him by buying a clean 253 SS hatch. 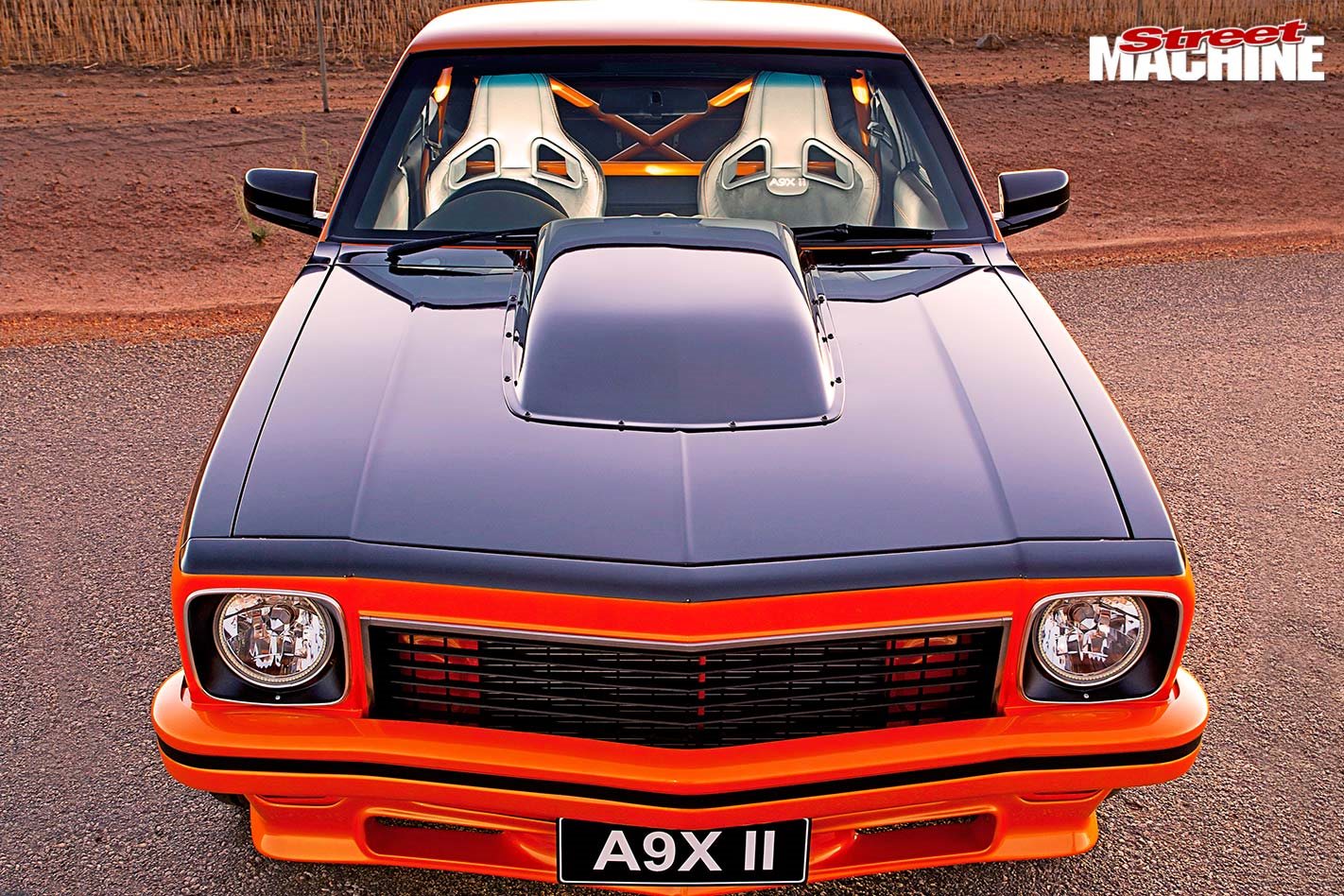 “He found one, brought it down and we had a look at it,” Mark recalls. “I said we should find something a bit more basic rather than cutting up something good.”

So David sold that hatch and Mark found a nice standard car in North Queensland.

“It was just a neat, rust-free, beige six-cylinder automatic with air conditioning and a set of Hotwire rims,” he says. Picture that in your mind then look at the photos. It’s hard to imagine that the car before you started life as a basic grocery-getter.

While it uses plenty of parts from the Holden and HSV catalogues, the amount of work required to put it all together is just staggering. Even knowing where to begin the build story is hard. 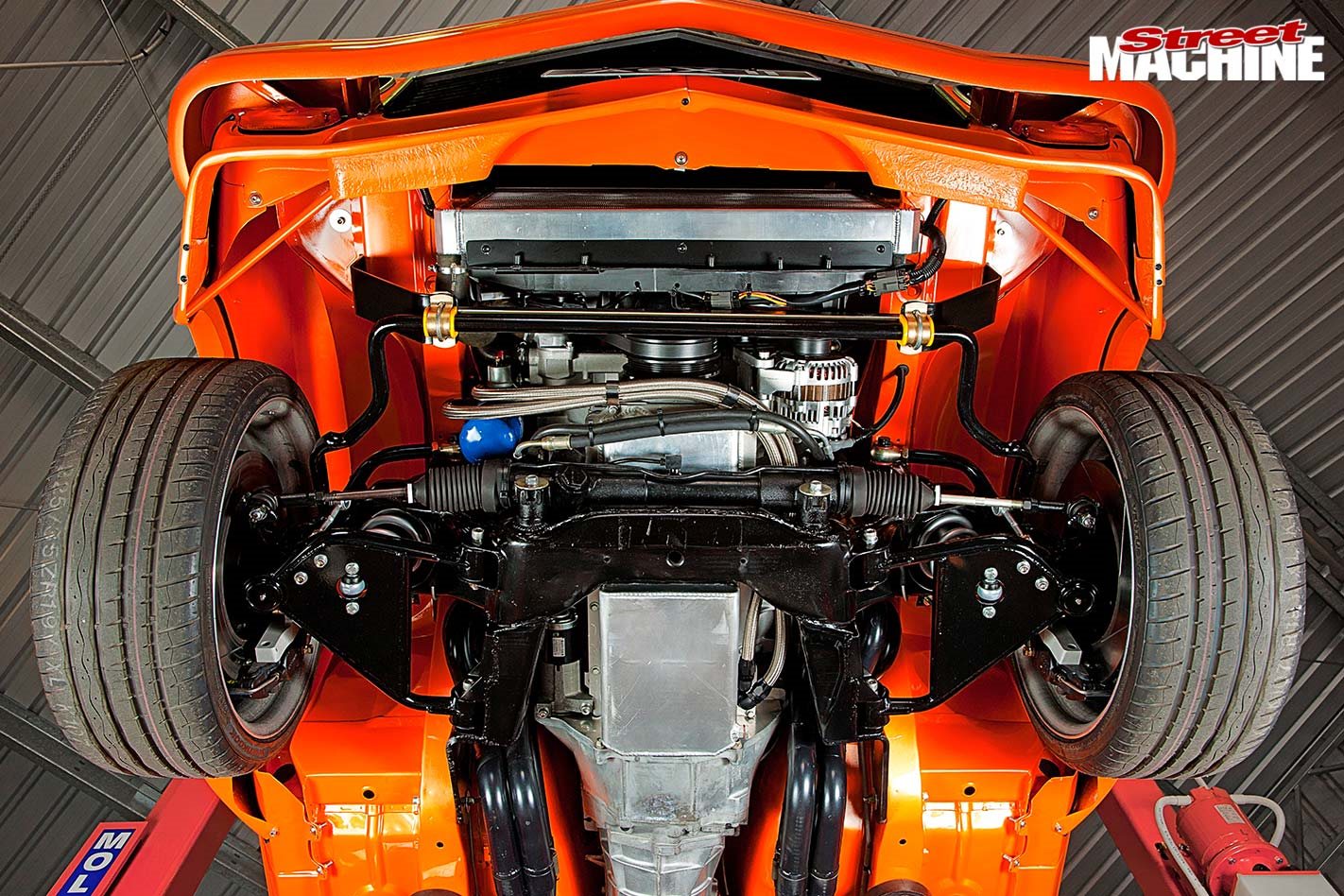 This isn’t your average Torana, as Mark reminds those who ask how he made everything fit. “Crossmember, engine mounts, sump, headers — everything is custom, made to fit as a unit”

Look at the interior. That’s no cut and shut Commodore dash. Sure, the slightly modified VY dash fascia and VE gauge binnacle are HSV items but the dash is custom, made of steel and composite. It’s a million times better than the 70s-spec original and expertly covered in leather it looks better than any new HSV too.

With a VZ wiring harness to run things like the power mirrors and electric windows, the hatch has all the mod cons. The seats are Recaros, leather trimmed by Arrow Upholstery — as was the rest of the interior. There’s a full chrome-moly ’cage too but you’d be hard pressed to spot it up front. They tucked it all away there but made it a feature in the back to showcase the car’s race heritage. 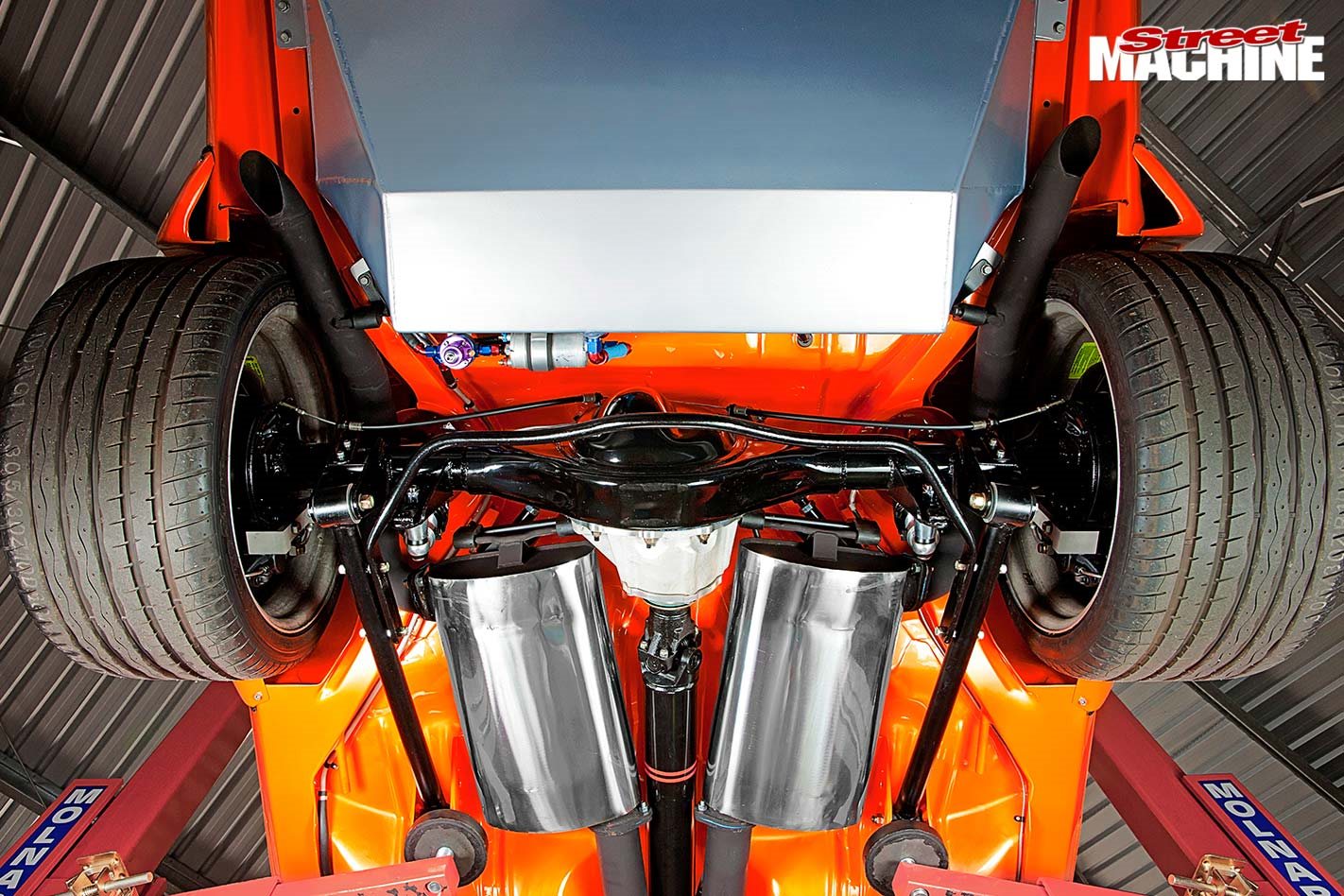 All the glass is brand new and Mark reckons they knocked back a half a dozen sets to get it right. “From wobbly and horrible, right up to almost perfect — but in the end they got it.”

Outside was given as much attention as the interior. Naturally they’ve gone for the full A9X kit but the flares have been smoothed and reshaped so they look part of the car, not the usual add-ons. To clear huge rubber, the rear guard openings were cut and reshaped to look factory. There’s no sheet-metal butchery here.

Keen eyes may already have spotted the VS Commodore door handles, though we’re betting you didn’t, and how about those VY door mirrors? They just look right.

The bumpers have all been cut and shut to cinch up tighter to the body and the whole lot has been coated in Lamborghini Orange by Vulcan Paint & Panel, which handled the bodywork as well. 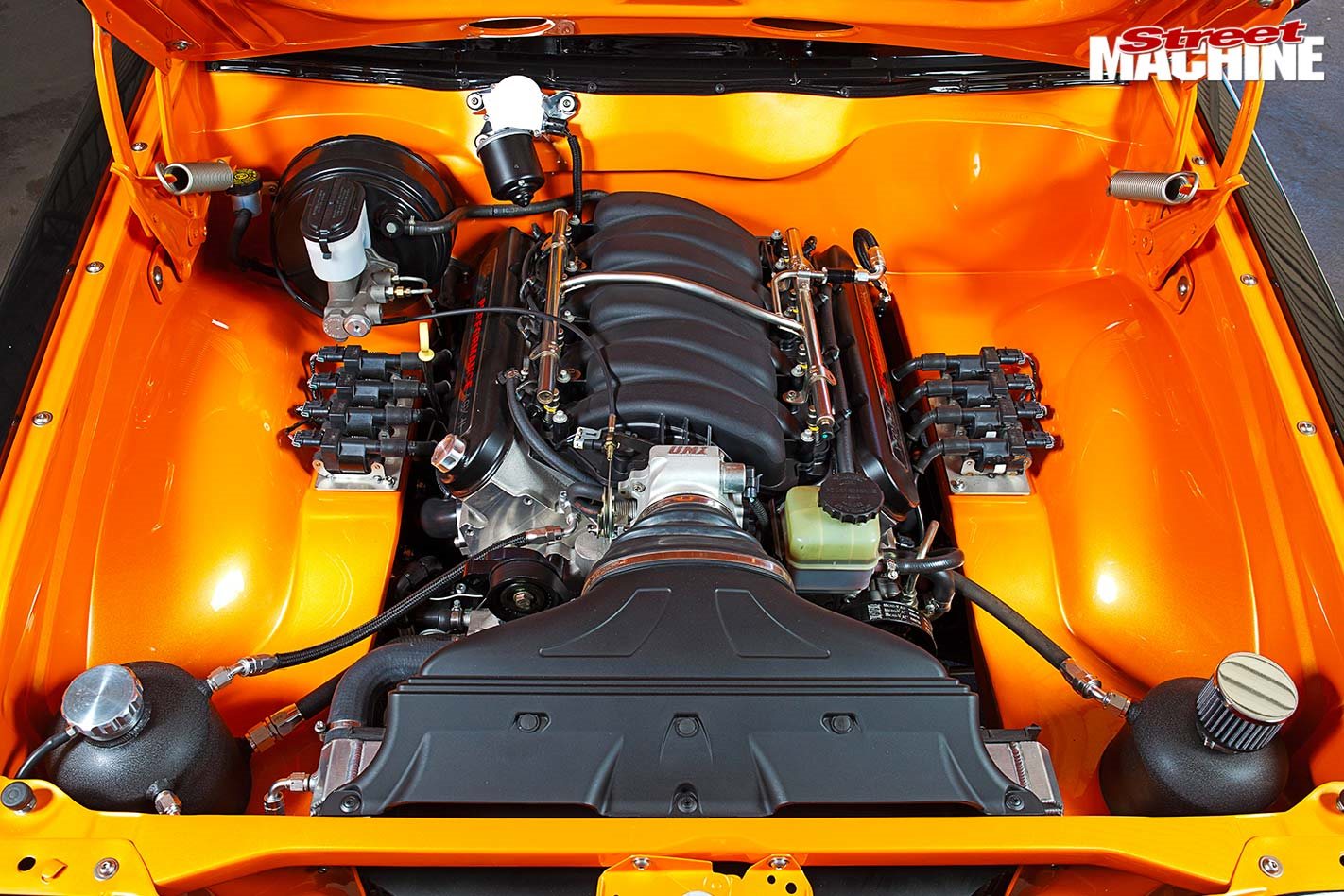 Up front, the VCM Suite cold-air intake feeds a 7.0l C5R motor punching out bulk power. Nothing is hidden because the whole idea of this car is that it’s a fully functional machine

Mark admits he was probably a bit of a hard taskmaster when it came to overseeing the body, paint and interior, but he had a vision.

And part of that vision was the wheels.

Have you ever seen a set of 19in Hotwires before? We’re betting not. 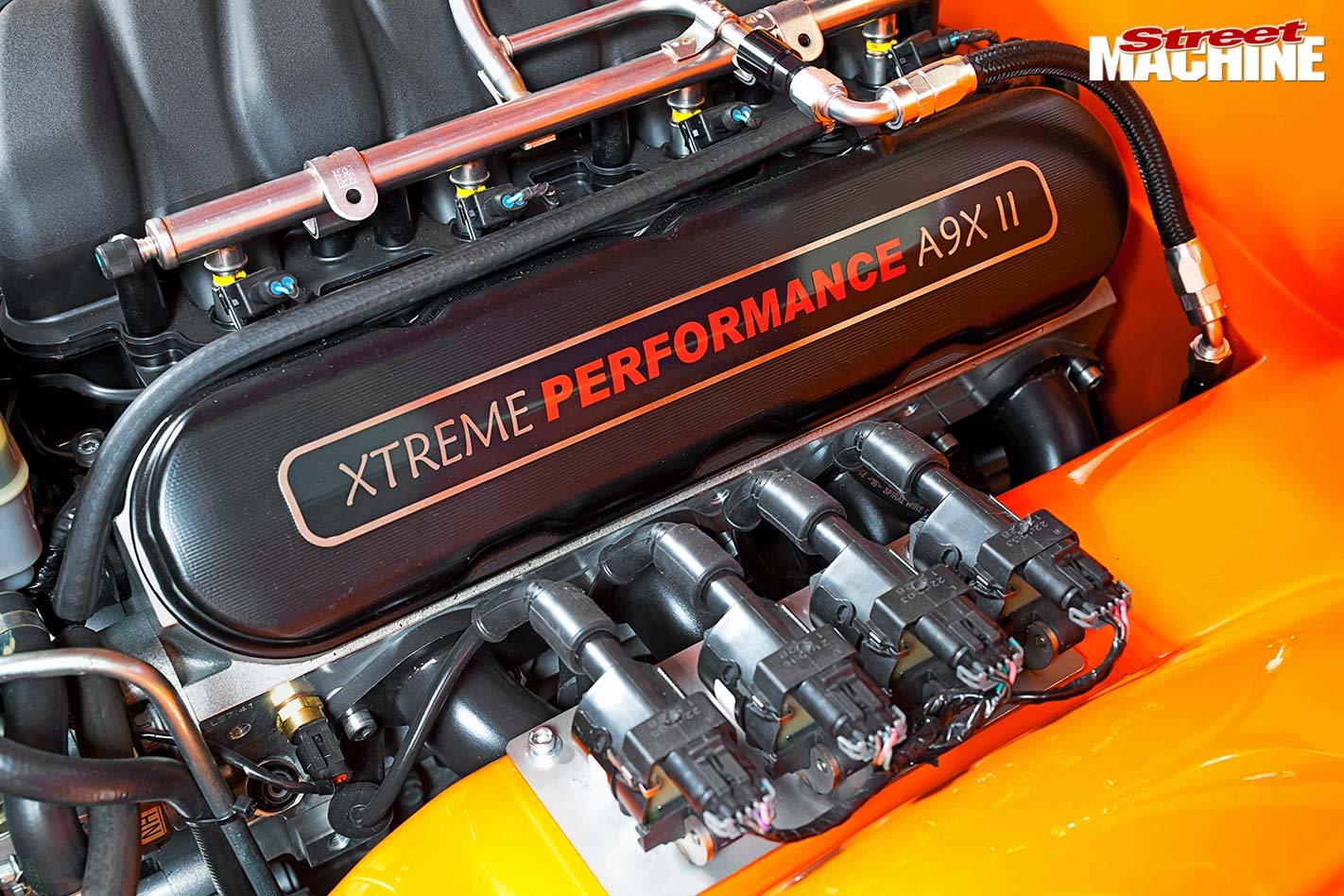 “No doubt we could have picked rims that would’ve cost bugger all in comparison and they’d still look okay but the whole project works on those wheels.” Dave and Mark agreed — it had to have those wheels.

But building a custom wheel is easier said than done. Mark sent the project to two different wheel manufacturers who both looked at it and then handed the problem back.

“It was just too hard for them,” Mark says, “so we had to go through the very painful process of working out how to build a cast of the thing ourselves.” 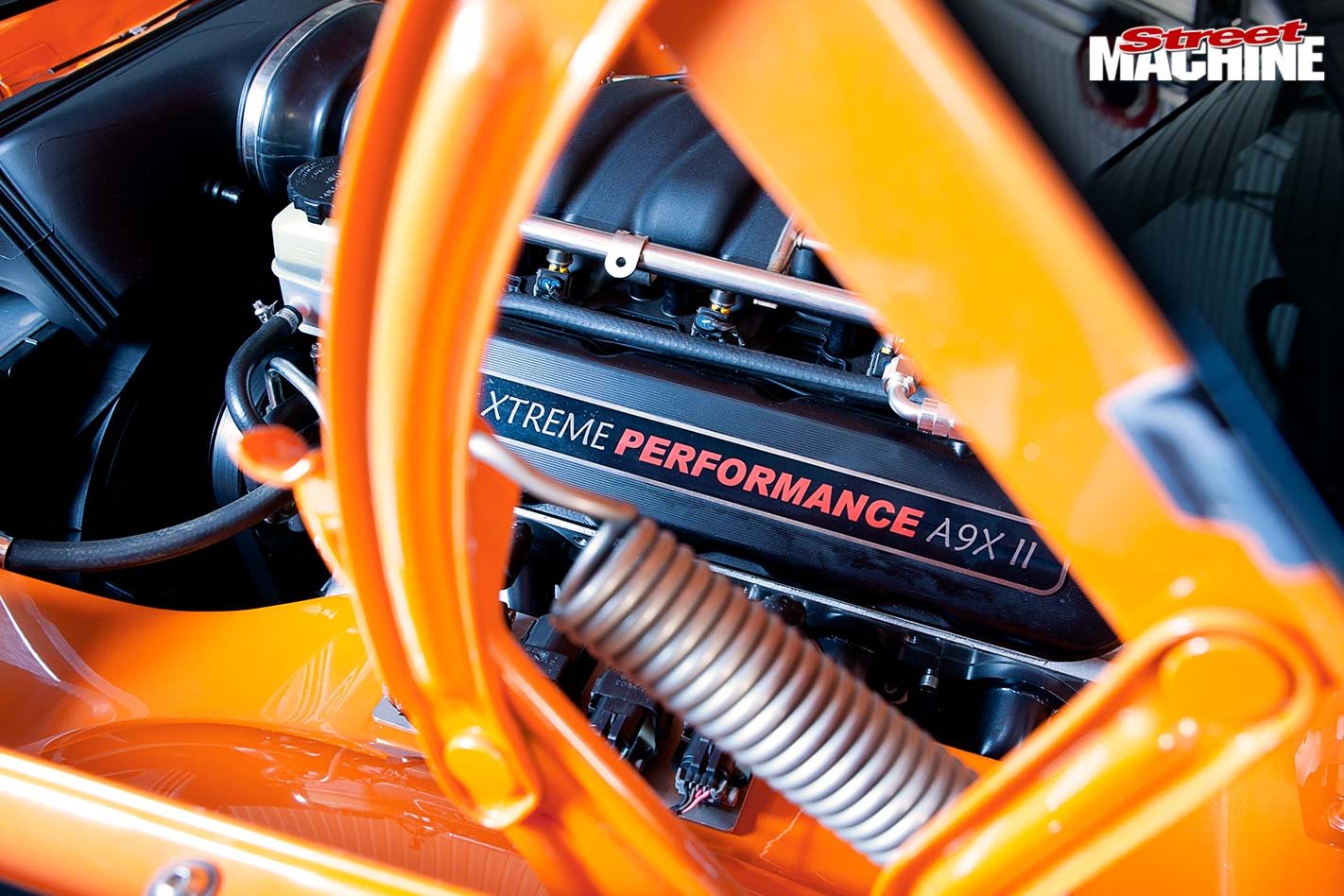 Mark put a stack of hours into measuring, drawing and consulting to get it right. Using local casting facilities with experience in producing wheels they came up with a centre that looks perfect. The machined centres were then mated to two rim sections to create a set of custom three-piece 19in Hotwire wheels.

Naturally we’ve made it sound far simpler than it was. Adding to the complexity of the task, the front AP Racing six-spot brakes had to be totally redesigned to suit the offset of the new front wheels. “Ideally I’d have another half to three-quarters of an inch of convex on that front wheel, but we we’re out of room,” Mark says. 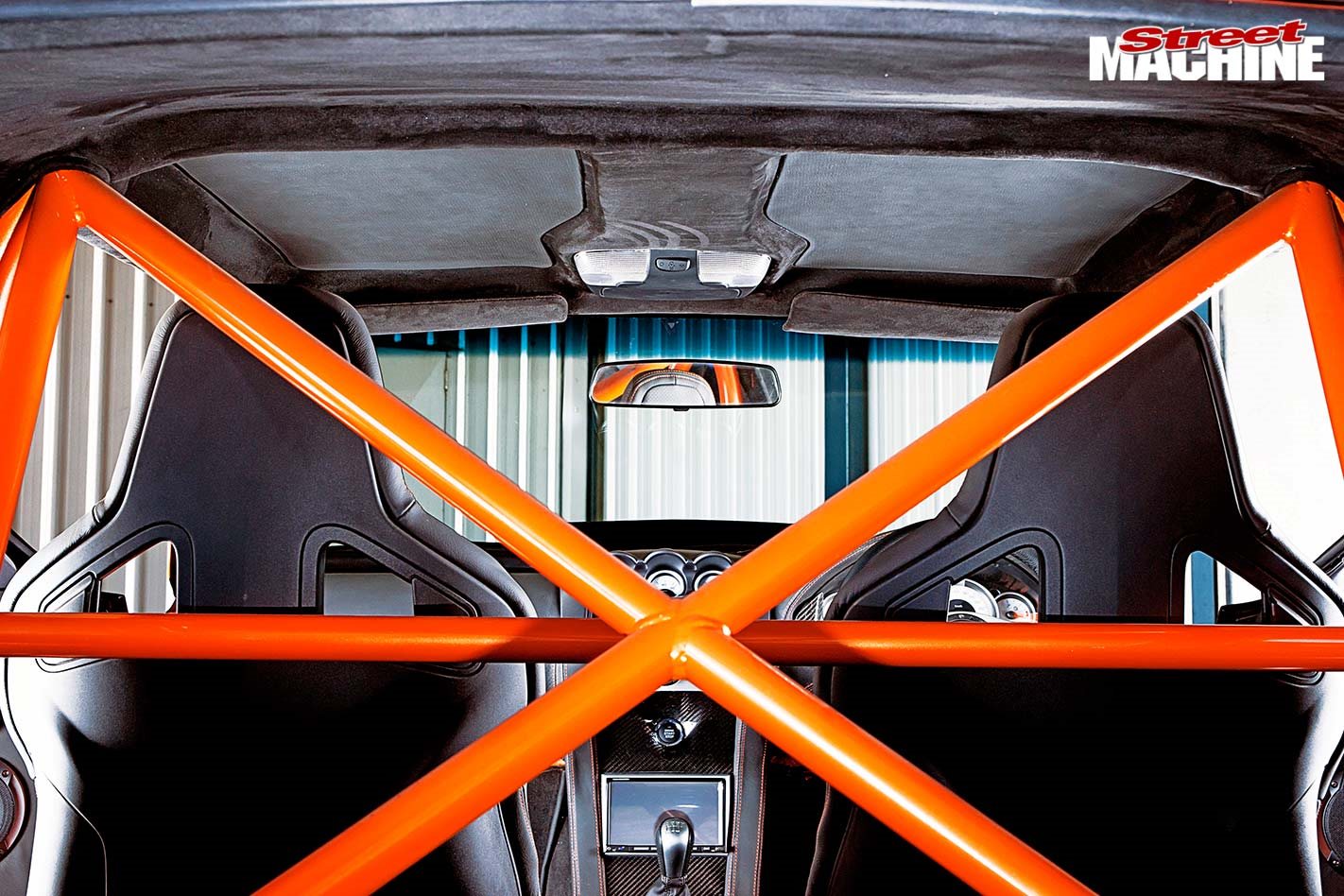 With the body, paint, interior and wheels sorted, all that was left was the driveline. Starting from the back, there’s a 31-spline full floating nine-inch rear. It’s got a Truetrac differential, Strange alloy centre and 3.5 gears to help put the power down.

Moving forward, there’s a chrome-moly tailshaft connected to a T56 Magnum six-speed and an extreme-duty clutch. Mark and Dave thought about a sequential six-speed for a few moments but dismissed it as an unnecessary burden.

“The sequential ’box in a race car would be awesome, but as a road car, not so much,” Dave explains. “They’re not nice to use unless you’re charging up and down the gears.” 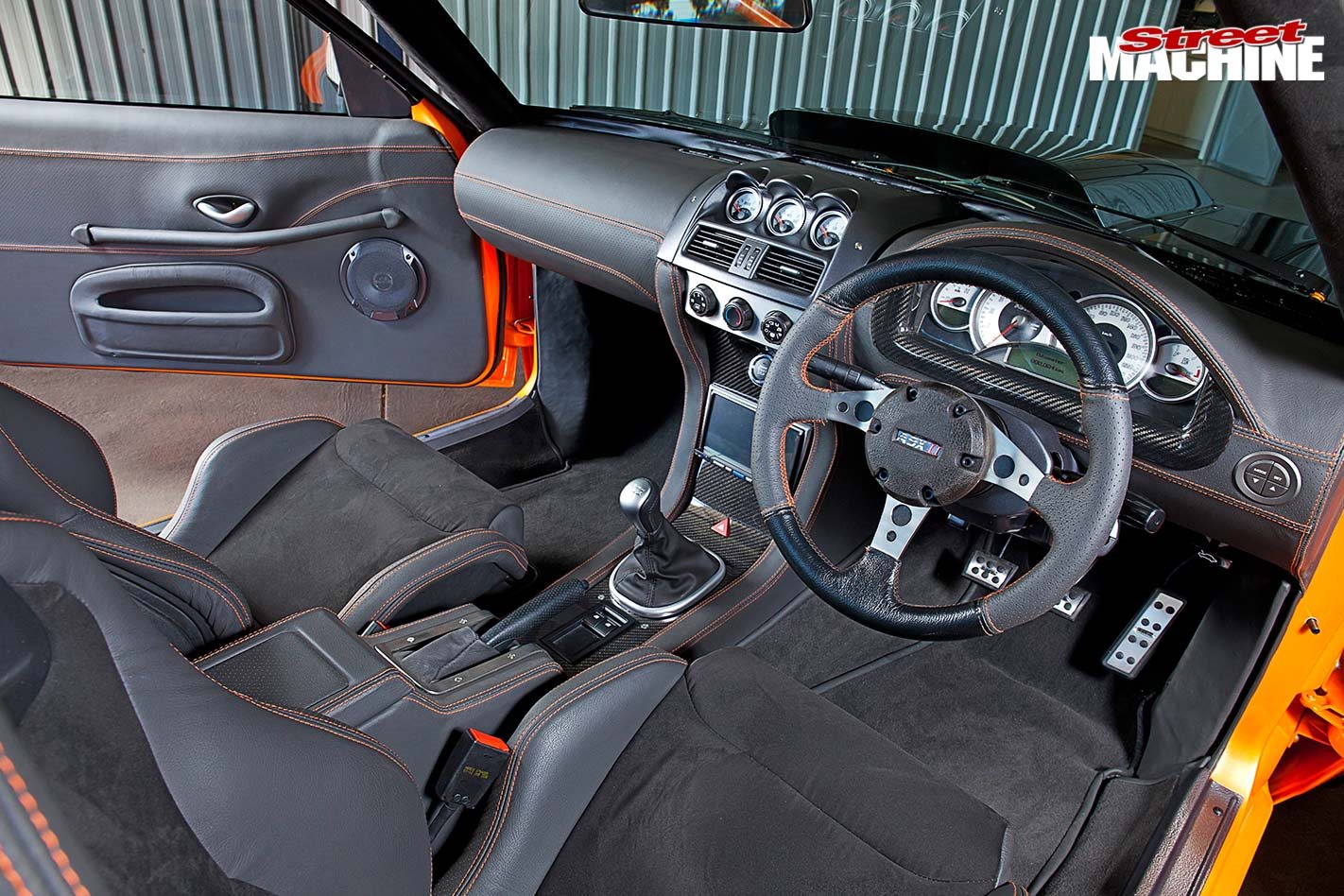 The custom dash was fabbed from steel and composite, with late-model HSV gauge clusters and trimmed in leather. There’s also a centre-pull handbrake, partially hidden ’cage and much more

At the pointy end you’ll find more horsepower than the Spring Carnival thanks to a healthy seven-litre C5R engine.

Mark’s gone for the best compromise between street and track to pump out 550hp to the treads. It’s got all the good gear, with Ross pistons, Carrillo rods and a Callies crank working with ETP heads, Jesel rockers and a hydraulic roller cam, but he reckons it’d make even more if they wanted to turn up the wick. 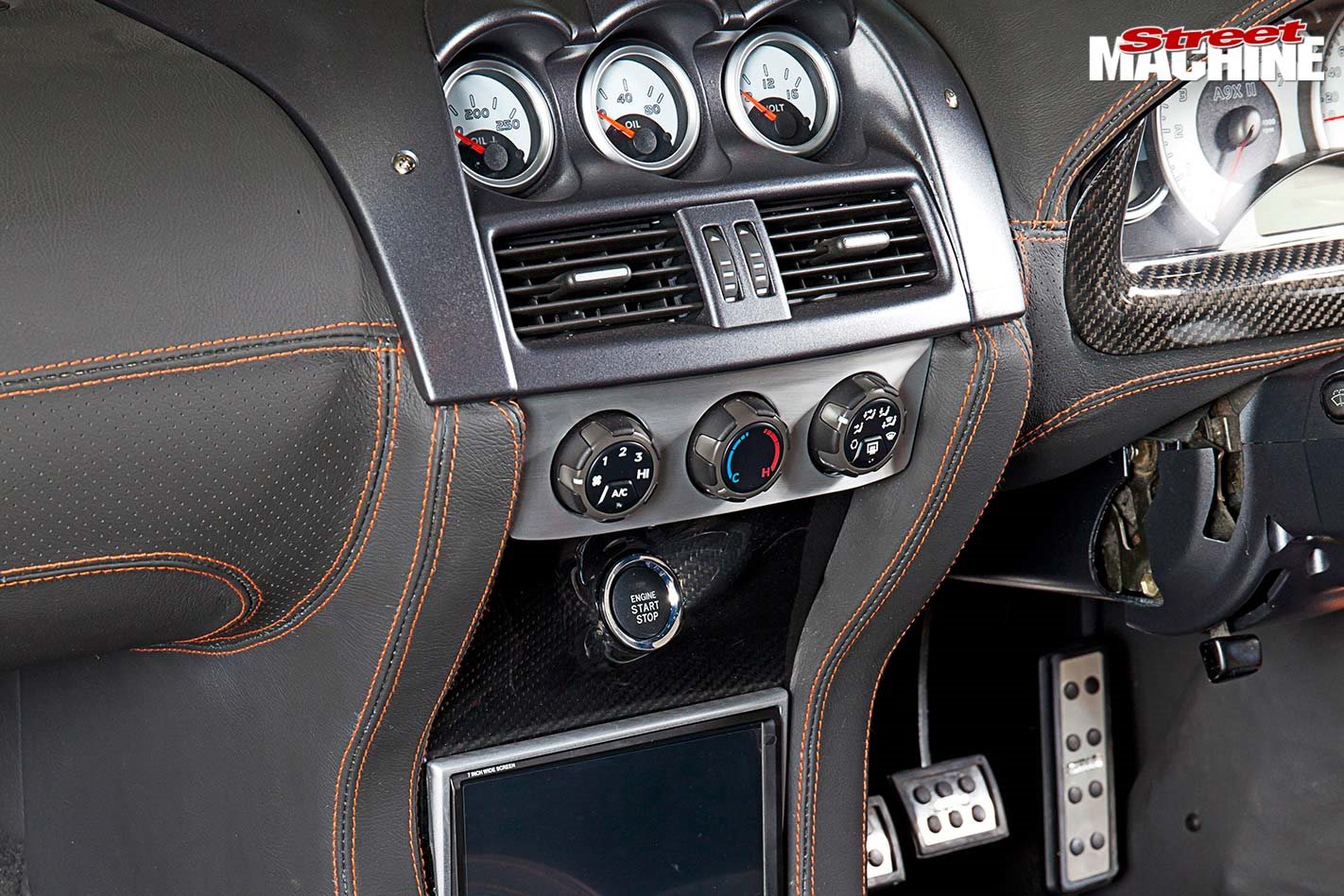 “If we put a bigger manifold and a 100mm throttlebody on it with a bigger solid cam we could probably run it up into the 650-700hp range,” he says. “But we’re not chasing that; we just wanted to build a very good engine with all the right components. We’re not pushing it too hard; it’s a fairly conservative tune.” 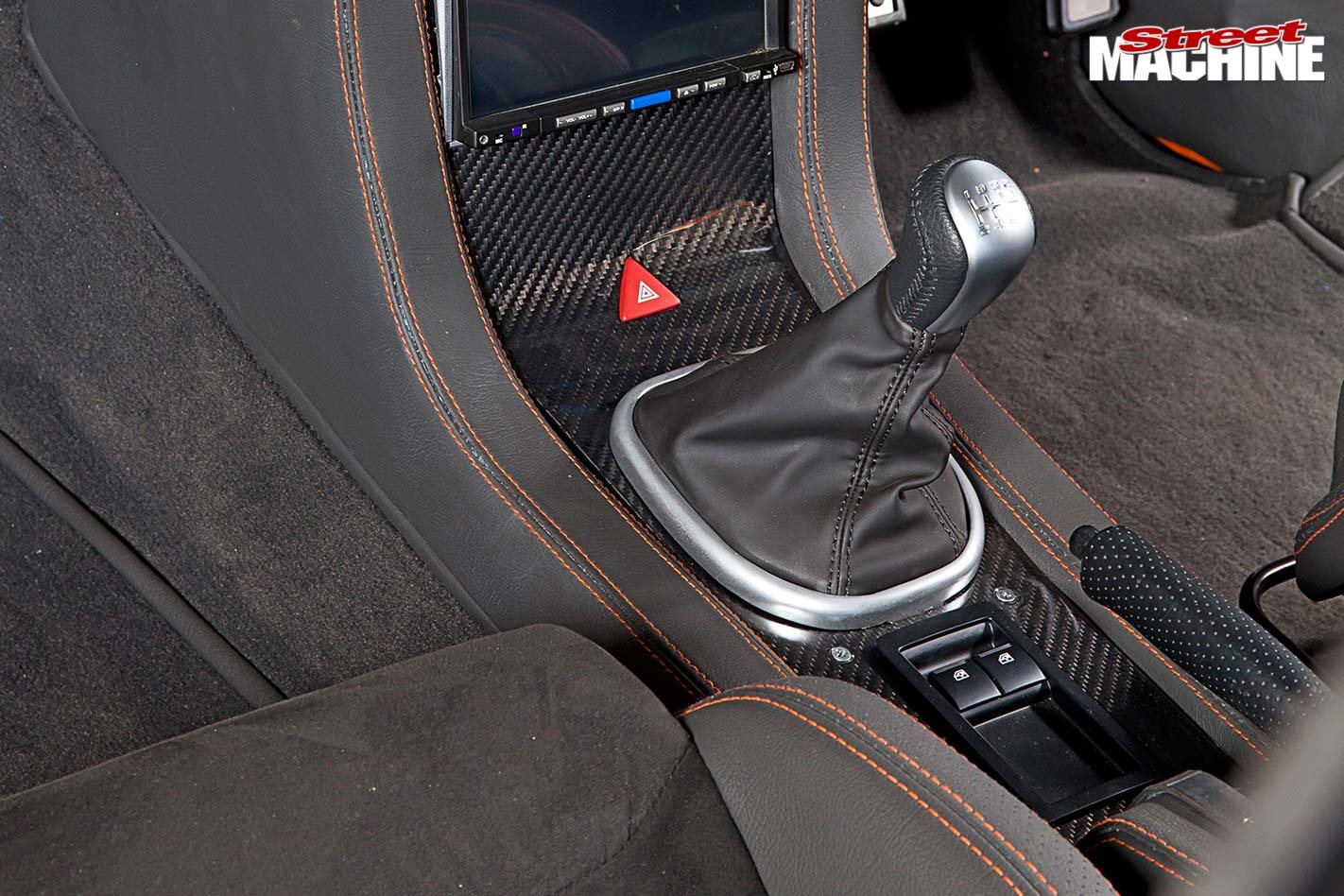 “I haven’t thrashed it but the driving that I’ve done with it as a normal road car, it’s a super-responsive, super-strong machine.”

With the keys handed over, the question now is what Dave plans to do with it.

“The whole car has been built to be able to run 10-tenths, so if he wants to hit the circuit, it’s been designed with that in mind. The only thing that we’ve done wrong on that score is make it too nice but if he built a glass case and put it in the lounge room, I’d be fine with that too.” 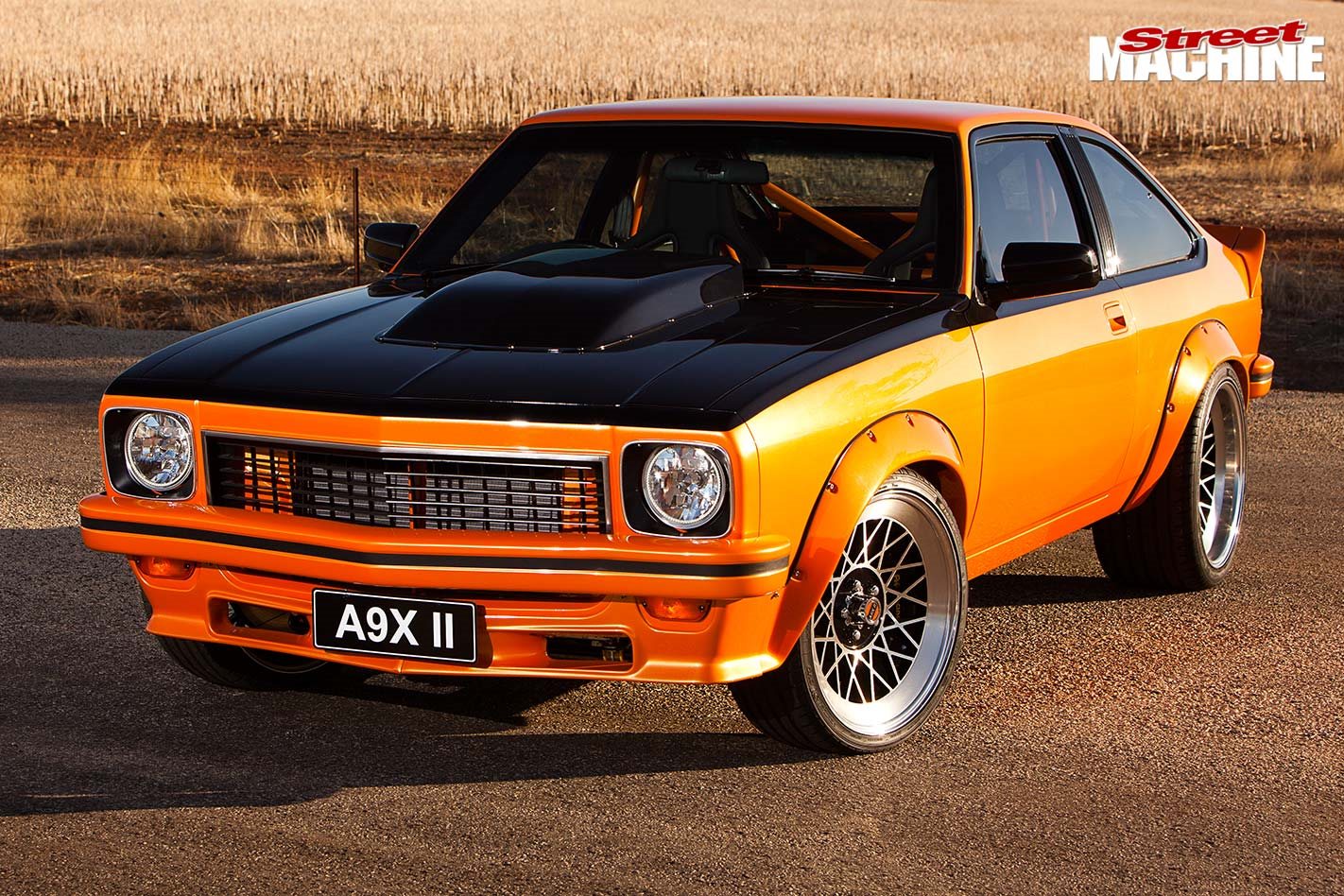 THANKS
To David Heaton for letting us (Mark’s Workshop) build this car for him. Also to Sam and the guys at Vulcan Panel & Paint, Jeff at Arrow Upholstery, John at Woodies for the glass, and Steve, Phil and Fred for their help with the wheels