I LOVE cars that look plain and innocent from the outside but go wickedly fast. If you came across Garry Hunt’s pale granny green 1979 VB Commodore driving around Rockhampton you wouldn’t give it a second glance. The hornet scoop is the only giveaway that there might be something sinister hiding underneath the bonnet.

When most people build their cars they start off with a tough motor. Garry did the opposite; he began by fitting a nine-inch diff to the VB and drove it around with the stock six-cylinder until he got the rear end right. Only when the 3208lb car was set up properly with adjustable top arms, Panhard bar, 26mm custom-built sway-bar, 35-spline Mark Williams axles and a Strange 4.11:1 alloy centre did Garry commence work on the motor.

A heavy cast-iron Dart Next block was chosen, initially as the basis for a turbo LS motor. But while Garry might still go turbo at some point, for now the 440-cube donk relies purely on atmospheric pressure to run 9.32@144.6mph – there’s no nitrous, blowers or turbos in this single four-barrel street sleeper. It still runs the original hoodlining, carpet underlay, carpet, radio, factory glass and even the vacuum canister and wiper fluid bottle. 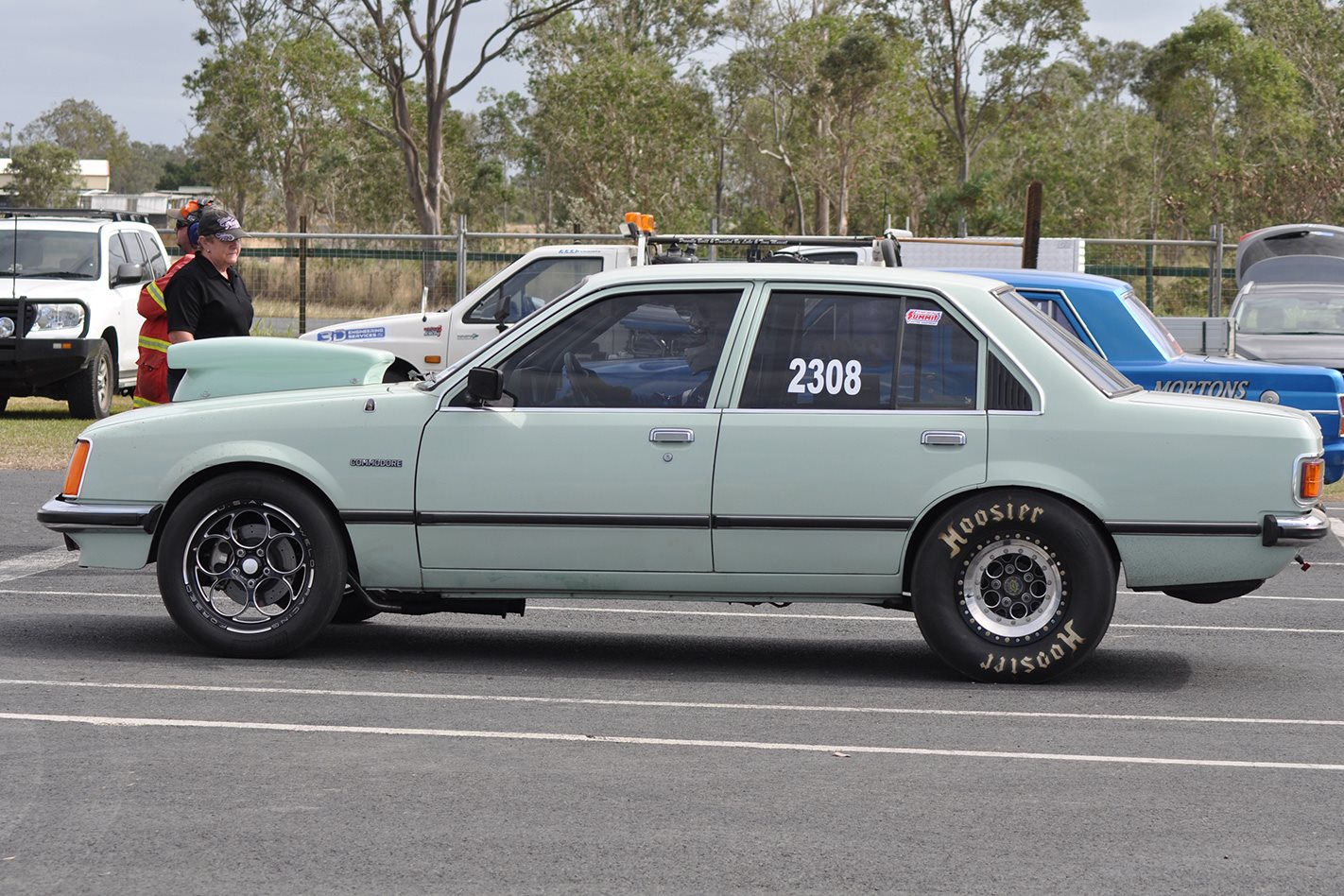 The LS motor is good for 774hp at 7300rpm.The rotating assembly comprises a Callies 4in-stroke crank and 6.125in rods fitted with 4.185in-bore forged JE 14:1 pistons. The alloy LS7 heads run 2.20in intakes valves and1.610in exhaust valves, and were ported by John Brian to around 390cfm at .700in lift. The PAC roller valve springs are set up 275lb on the seat and 680lb open. Garry didn’t want to give away the cam specs, but said the Comp solid-roller was in the low 260s with .730in lift, with T&D shaft-mounted roller rockers.

On race day a BLP belt-driven fuel pump feeds VP Roo juice from a small rear-mounted fuel cell into a single four-barrel Pro Systems 1100cfm Dominator carb on a CID manifold. A much bigger fuel cell is fitted for street duty. The fuel is lit by an MSD 6LS2 and rev-limited at 8100rpm. Exhaust gases exit via a set of Shane Kemp custom-built pipes. Shane works out of Brisbane and his pipes are sold as Kempy Race Pipes; you’ll find him on Facebook. 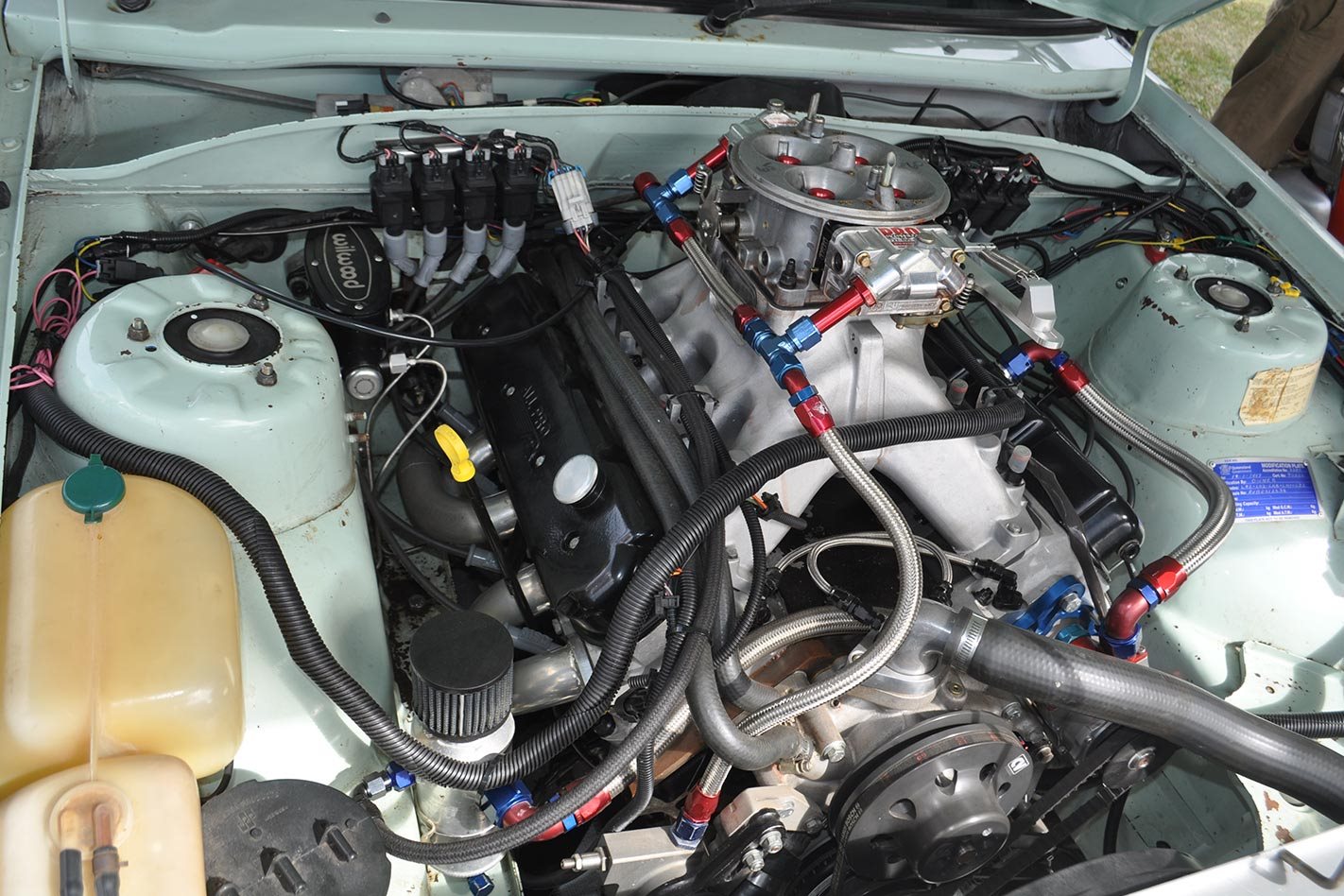 If you get the Moroso calculator out you’ll see the VB is only .02 seconds off perfect hook-up for the terminal speed. The 1.35-second 60-foot times (on eight-inch Weld beadlock rear rims with 28x10 Hoosiers) are partly a result of modern shock technology. The Commodore has Menscer adjustable shocks in the rear and Bilstein adjustable shocks up front. Interestingly, Garry found that stock factory rubber bushes worked better than highly regarded urethane bushes, which squeezed solid. He is about to try Pedders racing bushes, which are like OEM rubber bushes but made with much better rubber. 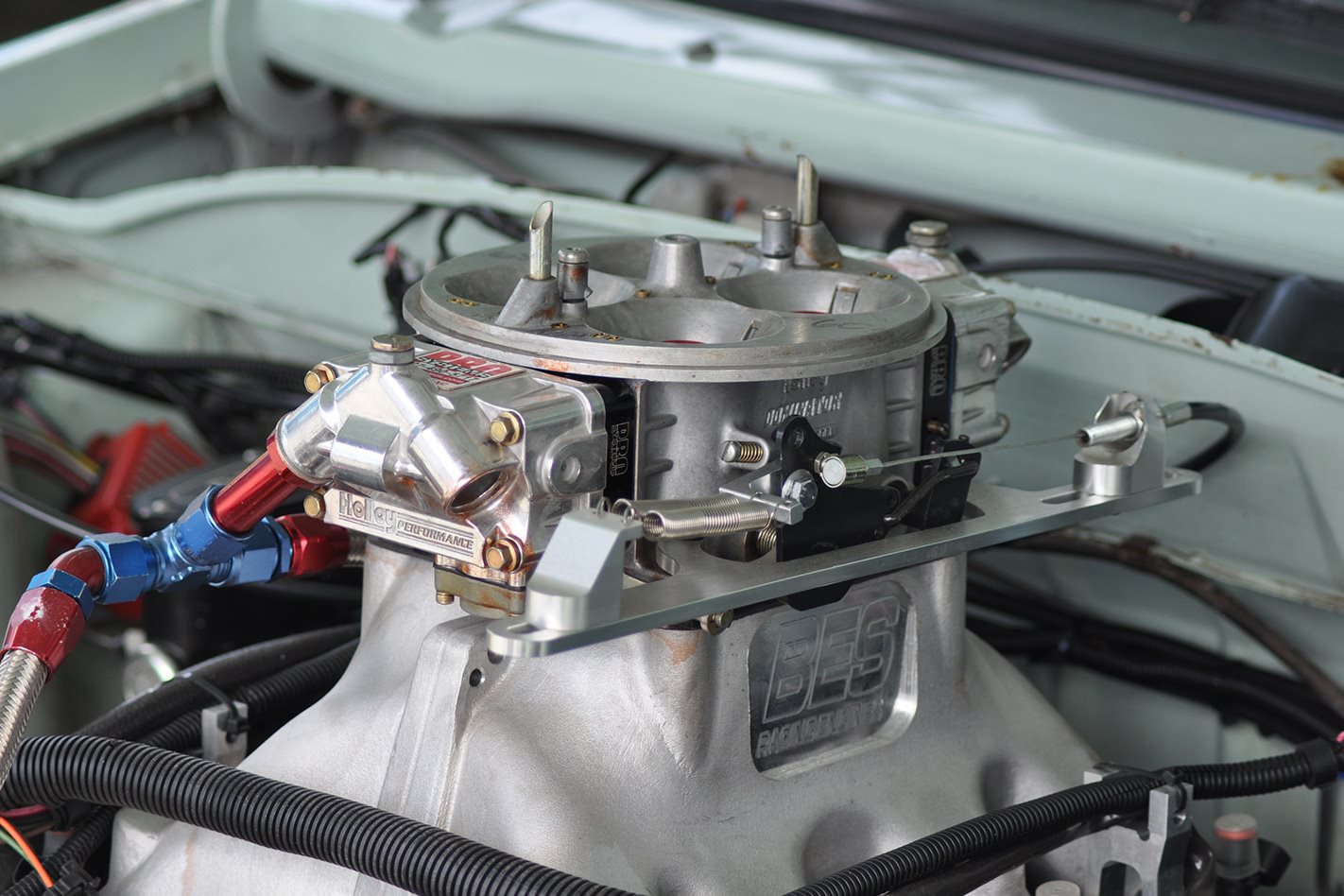 Another reason the car is hooking up so well is the Rapid Fab chrome-moly rollcage, built in Labrador, Brisbane. It is super-neat and ties the rear diff control arms into the car. The back doors shut just like the day the car rolled off the showroom floor, which is a pretty good indication the body is not twisting up. 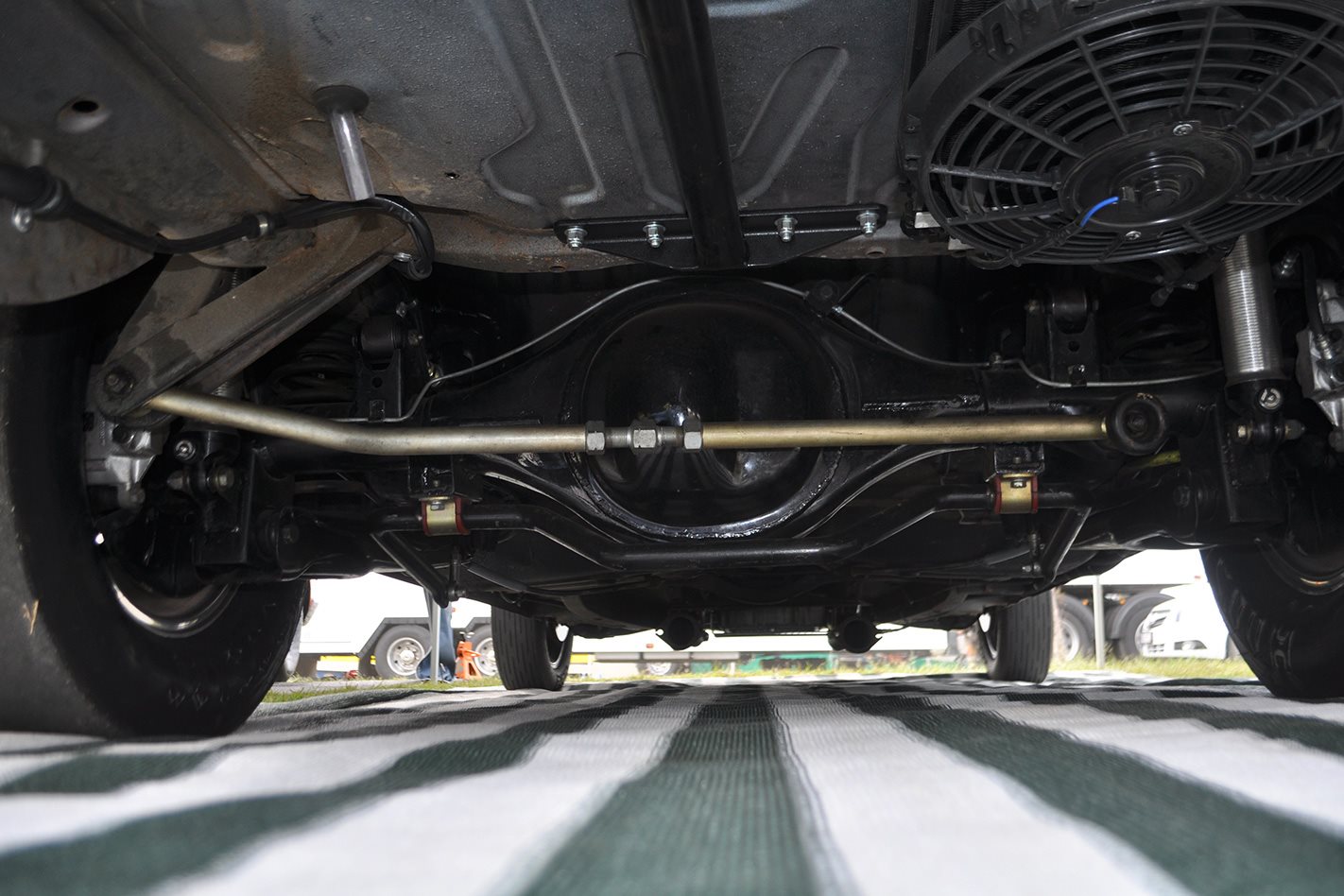 Lionel Durre has fabricated lots of neat stuff on the car, as well as building the TH400 trans. The heavy three-speed auto has all original GM rotating parts and is fitted with high-performance clutches, bands and a Griner transbrake valvebody. Geoff Dell built the 6000rpm stall converter. Gears are changed via a Shifnoid rpm-activated B&M Pro Ratchet shifter. The chip is set at 7400rpm, but the Holley EFI datalog dash replay shows the ’box actually shifts at 7800rpm. 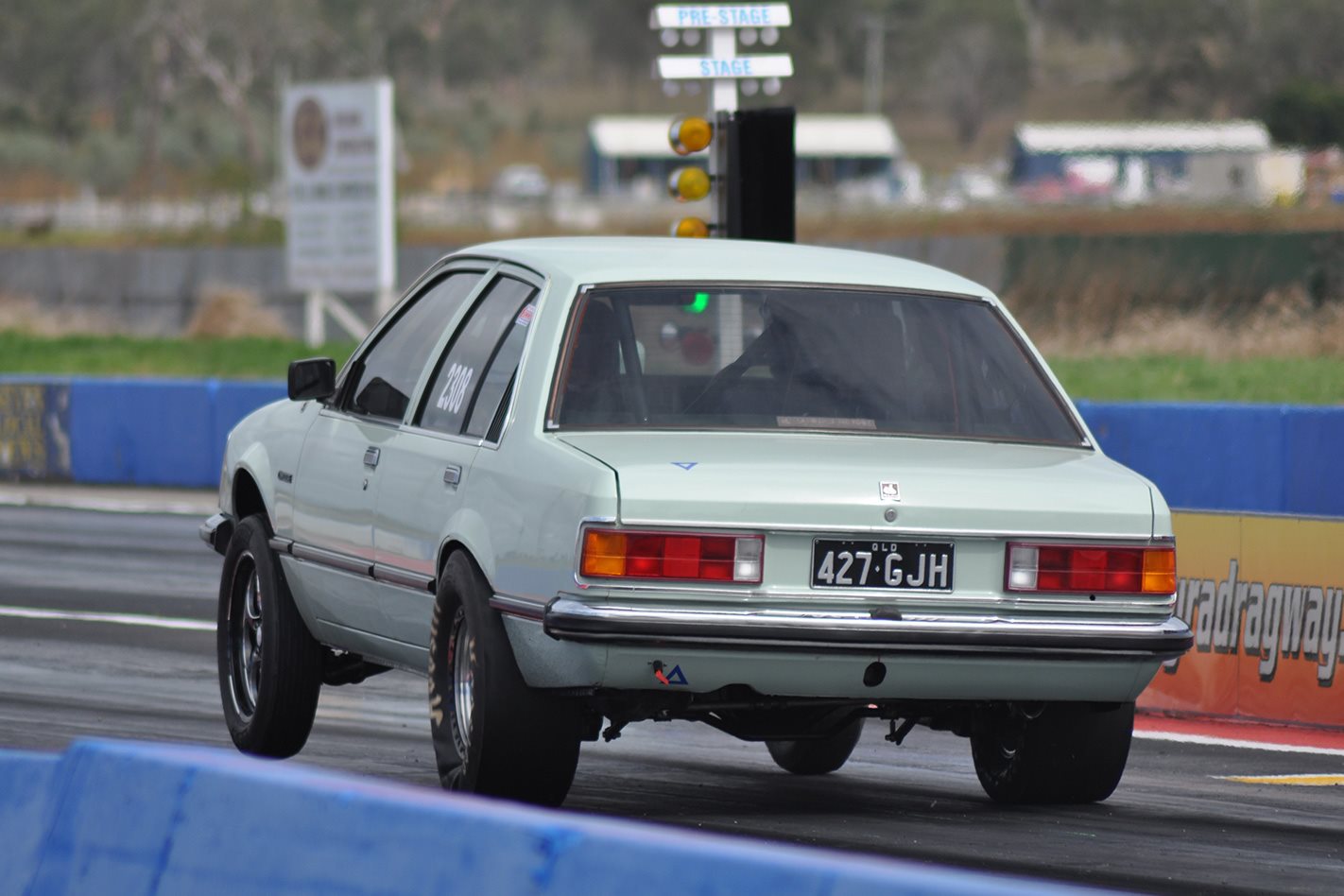 Something else worth mentioning is how cool the car runs. A big cast-iron Stewart Warner belt-driven water pump and eBay alloy radiator keep the coolant circulating, and the engine never goes over 70°C and is fitted with a 160°C thermostat. A Star vacuum pump is also belt-driven off the front ATI damper, keeping the Penrite synthetic 15-40 oil operating at seven inches of vacuum. The oil pump is a stock GM item. 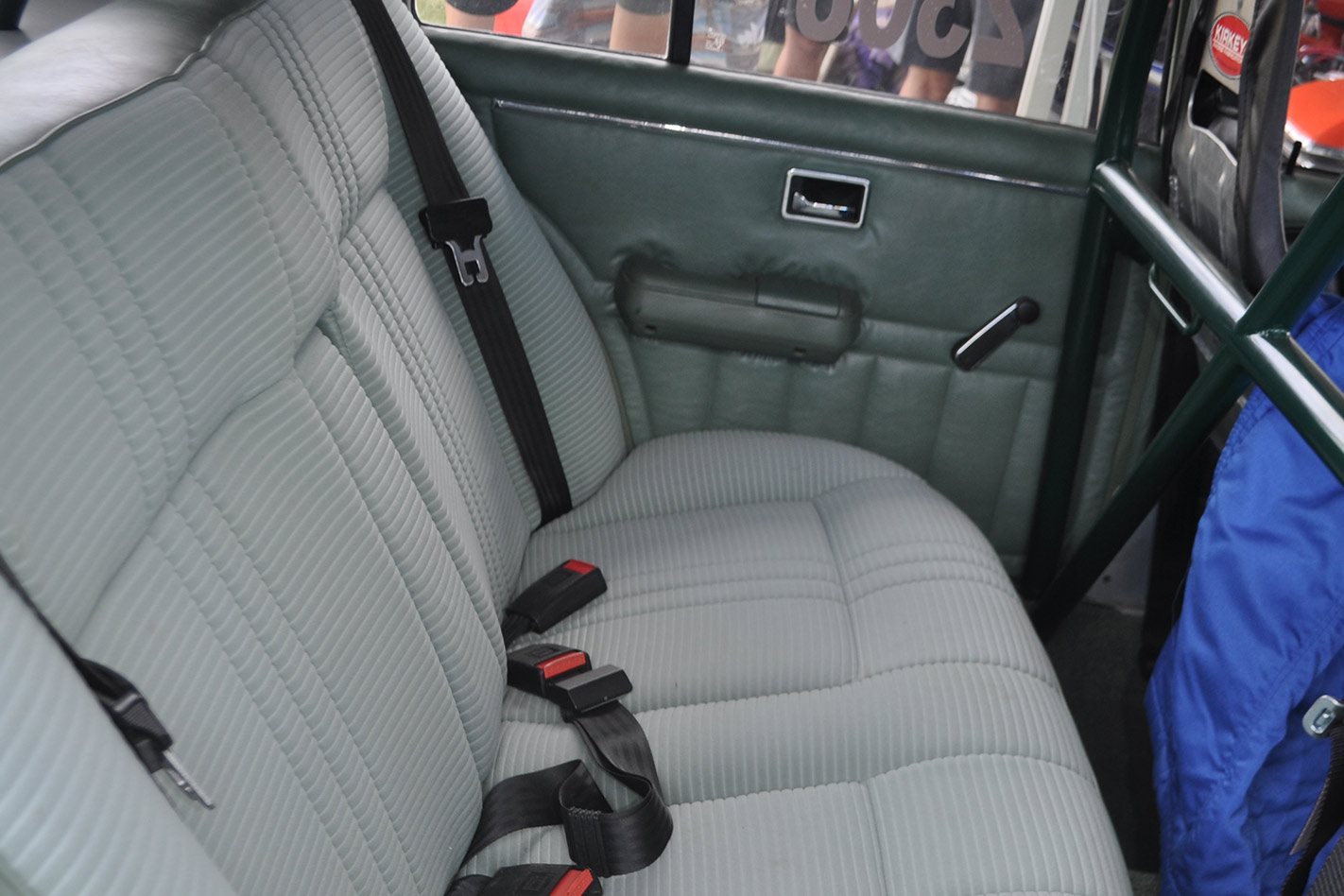 That’s about it for an evolving low-nine-second street car headed for the eights. Making 774hp at the engine, the car is showing around 750 Moroso weight-shifted Clydesdales and hooking up nearly perfectly. There are lightweight internals on their way for the TH400, which should shave a tenth off the quarter-mile times, and the baby solid-roller may be swapped out for a bigger stick in the future. 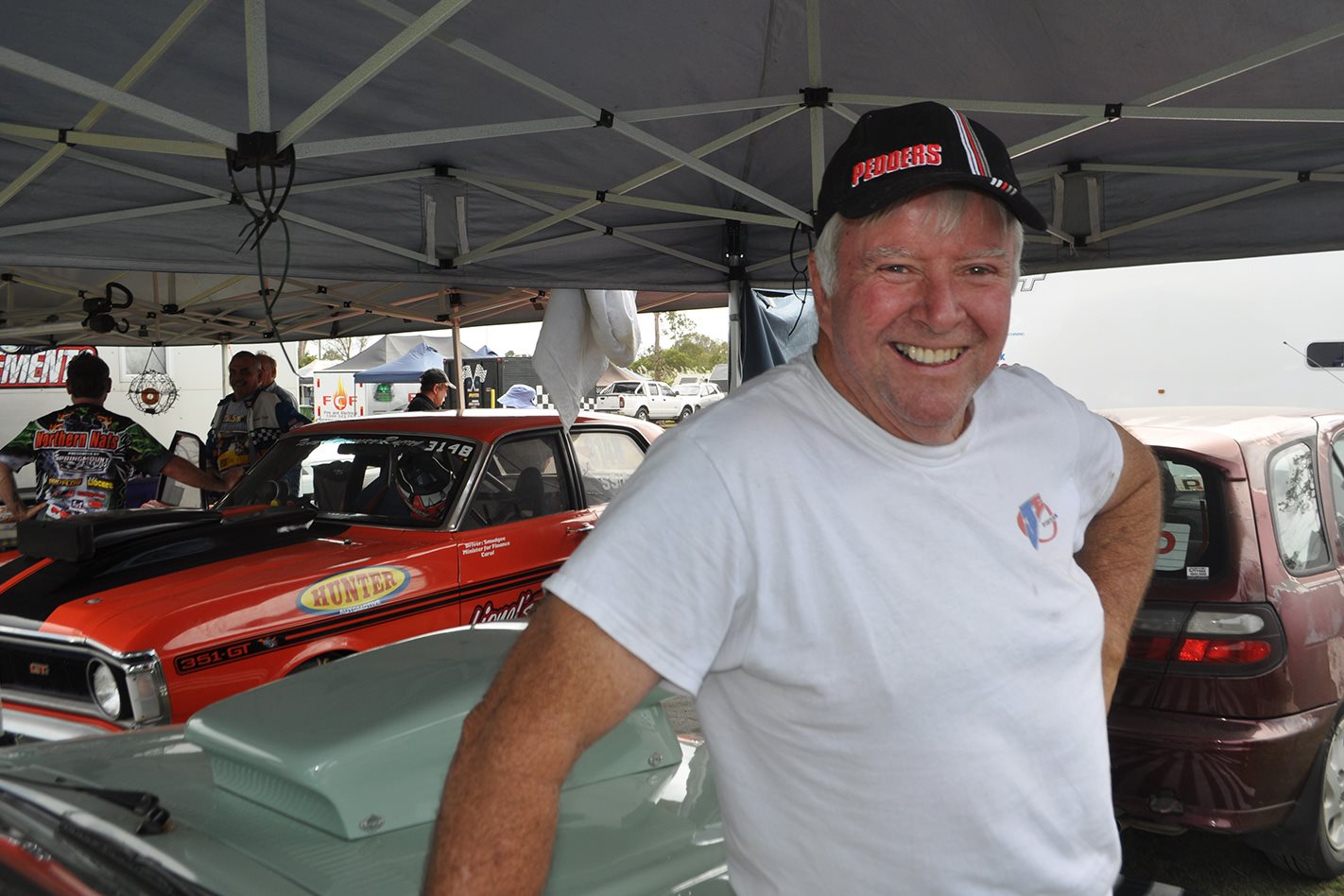 On race day Garry’s pit crew includes his grandson Baillie List, who is going to get to race the Commodore when he gets his licence. Baillie couldn’t get a better teacher than Garry when it comes to bracket racing; he’s been to the winner’s circle many times, and I know grandad will be proud as punch when Baillie finally gets a drive.

While not on the radar at this stage, I’d love to see the Commodore fitted with a Gear Vendors drive unit and compete in the Street Machine Drag Challenge N/A class. You never know, I might have planted a seed.