L-PLATER Jack Swansson strides into his carport, his long blond hair looking like he’s dropped straight out of Dazed and Confused. He’s bounced out of his job flipping burgers to chat to us about his passion for the 70s: the music, the clothes, the cars, and of course, the shagpile.

Ever get the feeling you were born about 50 years too late?

Definitely; the 70s is what I’m into; the music I listen to, how I dress and everything. I called my van ‘Sweet Emotion’ after the Aerosmith song; it’s playing during the intro of Dazed and Confused. When that Judge pulls around the corner – oh man.

So, what turned you on to vans?

I was always into old cars and was looking at panel vans online since I was 10 – HRs and stuff like that. Then I started getting into Bedfords and US vans like the Econolines. My dad Dan found this one for sale locally and sent it to me. Tell us about Sweet Emotion – the van, not the song.

It’s a 1980 Ford Transit Mk II, which is still Telecom orange underneath. The previous owner was a sex therapist. She had this massive bed in the back, but we took it out; I don’t want to know what it was for. Then we burned it. I think you’d almost be safe to put a blue light back there now; we’ve cleaned it heaps.

We got it last year when I was 15 and went straight to work on it. We started sanding it down and found inch-deep bog, cracks and chunks of rust that you could just pull out by hand. We pretty much had to recreate the rear guards. Doing the van taught me how to weld; I’d done a bit of that in Year 9, but this really taught me skills. I also did most of the spray painting. Dad helped with the masking up and I sprayed it here in the carport.

You’ve got an eye; how did you come across the colour scheme?

It’s kinda based on the Cruising Van option that Ford offered on the Econoline. They had a similar colour scheme, but we simplified it. We dropped the stripes down with the bodyline at the back, but at the front we weren’t sure how to finish it off, so we looked at a bunch of stripes; the Barracudas had a stuttered graphic on the front guard, so we just replicated that.

Oh man, it’s so P-plate friendly; just a standard 250 crossflow. Even the sidepipes are dummies; we found them on Gumtree and believe it or not, they had been fitted to a South African Monaro/Chevrolet SS. Who removes sidepipes? When we trundled through Kustom Kulture a few weeks ago, we just pumped dirt and crap everywhere, as the real exhaust exits downwards, just underneath.

Sweet Emotion has copped some body mods, too; take us through them.

The Mk II Transit originally just had two circular headlights, so we pretty much cut out everything and installed two stacked sets of Rodeo headlights with mounting buckets made from cake tins. Then we hit Bunnings and walked out with nine shower curtain poles for the grille, then went back and got more. They must have wondered what we were doing.

We never worked out where the bumper was from, but it stuck out inches at each end. It was massive, so we cut it down to bring it closer to the body. As for the chin spoiler, we found it at a swap meet. The guy had it in his shed for about 40 years and couldn’t remember what it was for.

Down the back, I plated up over the original tail-light holes and installed some 1959 Cadillac bullet lights, making the inner cups from three-inch exhaust tubing.

What’s the van rolling on?

The stud pattern on these is massive; there’s nothing that fits them. These are modified stock steelies; 14x5.5s up front and 15x7s down the back. I recently realised that Castlemaine Rod Shop does an adapter, but I’m not sure how many they’ve ever sold. Probably one. To me. Soon.

You’d better take us through the interior… but be gentle.

I wanted to keep it tidy up the front; but Dad wants to do a fur dash, full Cheech & Chong-style. The rearview mirror fell off the other day, so we replaced it with an EK Holden item from the yard-art ute out the front.

One of the first things we did when we bought it was put new carpet in it. We laid shag on the floor, then the roof, holding the custom roof card up for like an hour while we Tek-screwed it in place. We then taught ourselves to do the grid-tufting on the doors and on the blanket box that covers the gas tank.

Dad had these period-correct speakers lying around for years and his old man had them for years; none of them got around to using them, so they were brand-new, in the box. They even sound like the 70s! 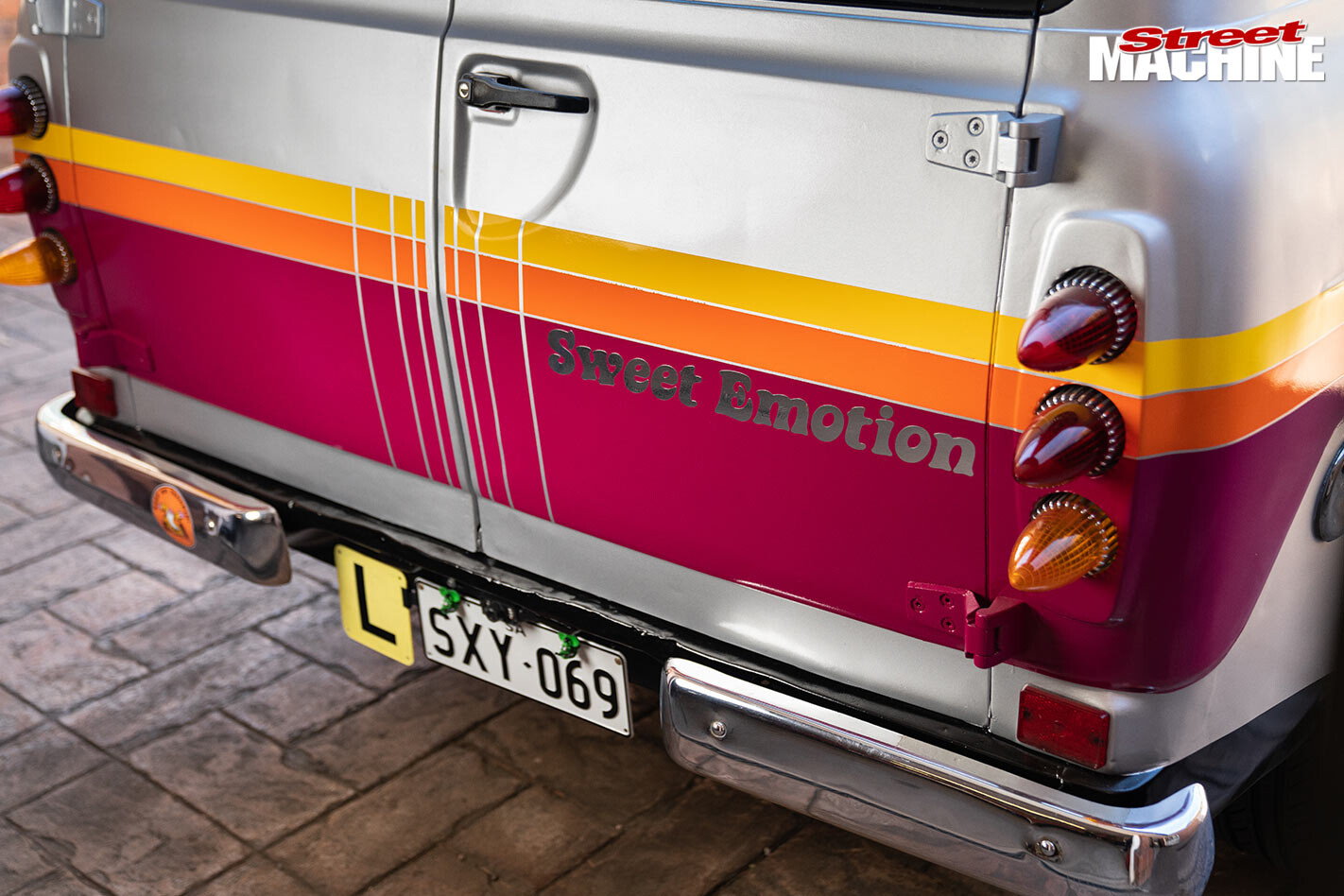 When I picked it up from the rego department, the lady didn’t say a thing, disappointingly. I spelled it out to her expecting something, but got nothing.

As soon as we saw it, we cracked up laughing. She didn’t even flash a grin.

When do you get off your L-plates?

November; I can’t wait to start driving it properly. I haven’t driven it to school yet but I have taken it to work a few times. It’s only 700m away, but they won’t let us kids walk home for safety reasons.

Your old man is in People Like Us this month; can we blame him for all this?

The whole ‘cruising around in cars listening to music’ thing was what I grew up with; I remember sitting in Dad’s ute and listening to Wolfmother and Led Zeppelin. I’ve been listening to Jimi Hendrix ever since I can remember, along with The White Stripes and The Ramones and stuff like that. When I started high school, I got The Dark Side Of The Moon on vinyl and I’ve been getting deeper and deeper into Pink Floyd ever since.

All of this stuff took me back to proper Delta blues music like Robert Johnson, the guy who sold his soul to the Devil.

So, in that respect, the van is kinda an extension of those interests. I started playing guitar when I was five, so now I play guitar, bass, ukulele, mandolin, drums, piano, trombone, trumpet; pretty much everything. I tend to pick up anything and have a go.

Dan, can you abide?

Dan: My childhood was going to car shows and listening to Led Zeppelin. I look at my kids and nothing’s changed. It worked okay for me; I’ve never been in jail!