WHEN Wagga couple Chris and Kirsten Genter first clapped eyes on the VC that would eventually become From Hell, they had little idea what they were getting into. 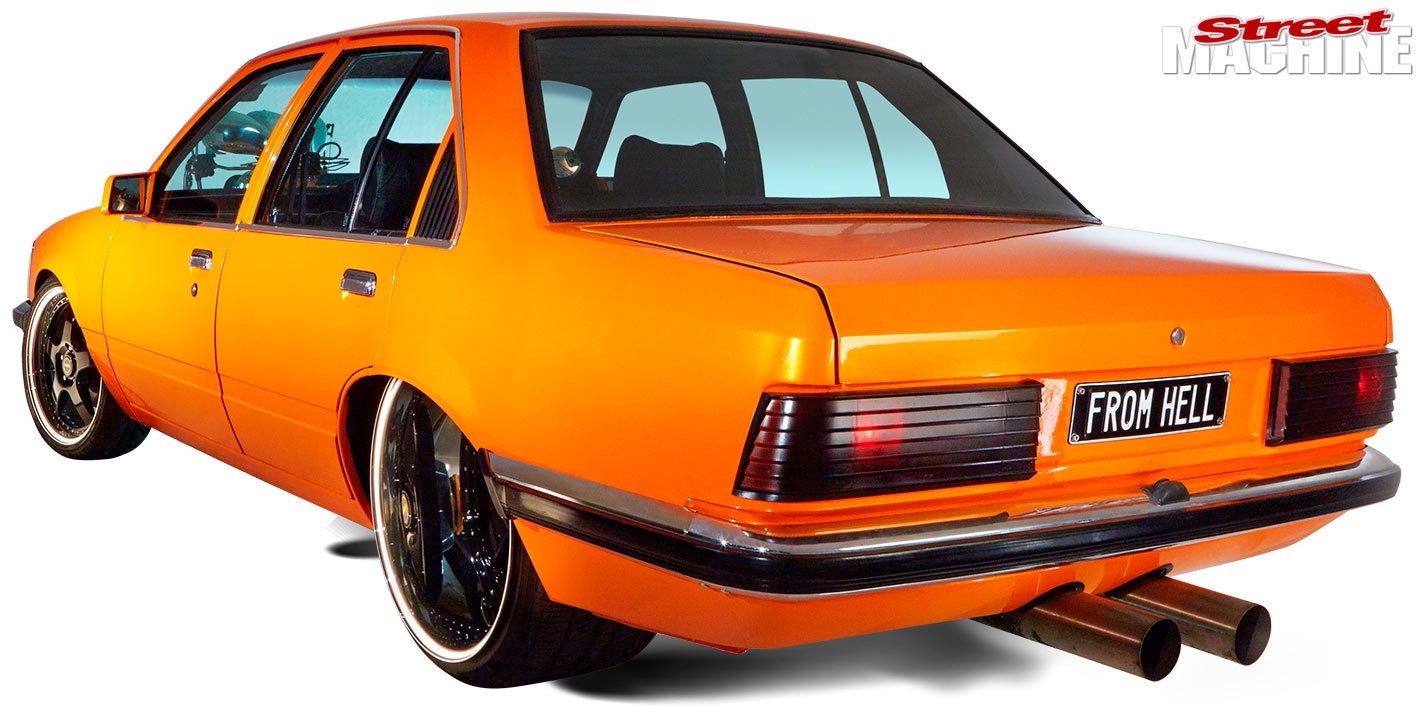 Based on a Ford Focus XR5 colour, From Hell’s DNA Tuscan Orange was sprayed by Jesse Warran-Rigby at A Line Bodyworks. “The XR5 colour inspired it but they look quite different next to one another,” Chris says. VH tail-lights and VB grille mix things up

They’d gone to Fernleigh Road Wreckers looking for some interior to put in another car when Kirsten spotted the Commo in original nick, panels reasonably straight and with an immaculate interior.

“I don’t even know why it was at the wreckers,” Chris says. “It had Tassie rego on it, it was running on gas, and it had a 202 with VK injection. 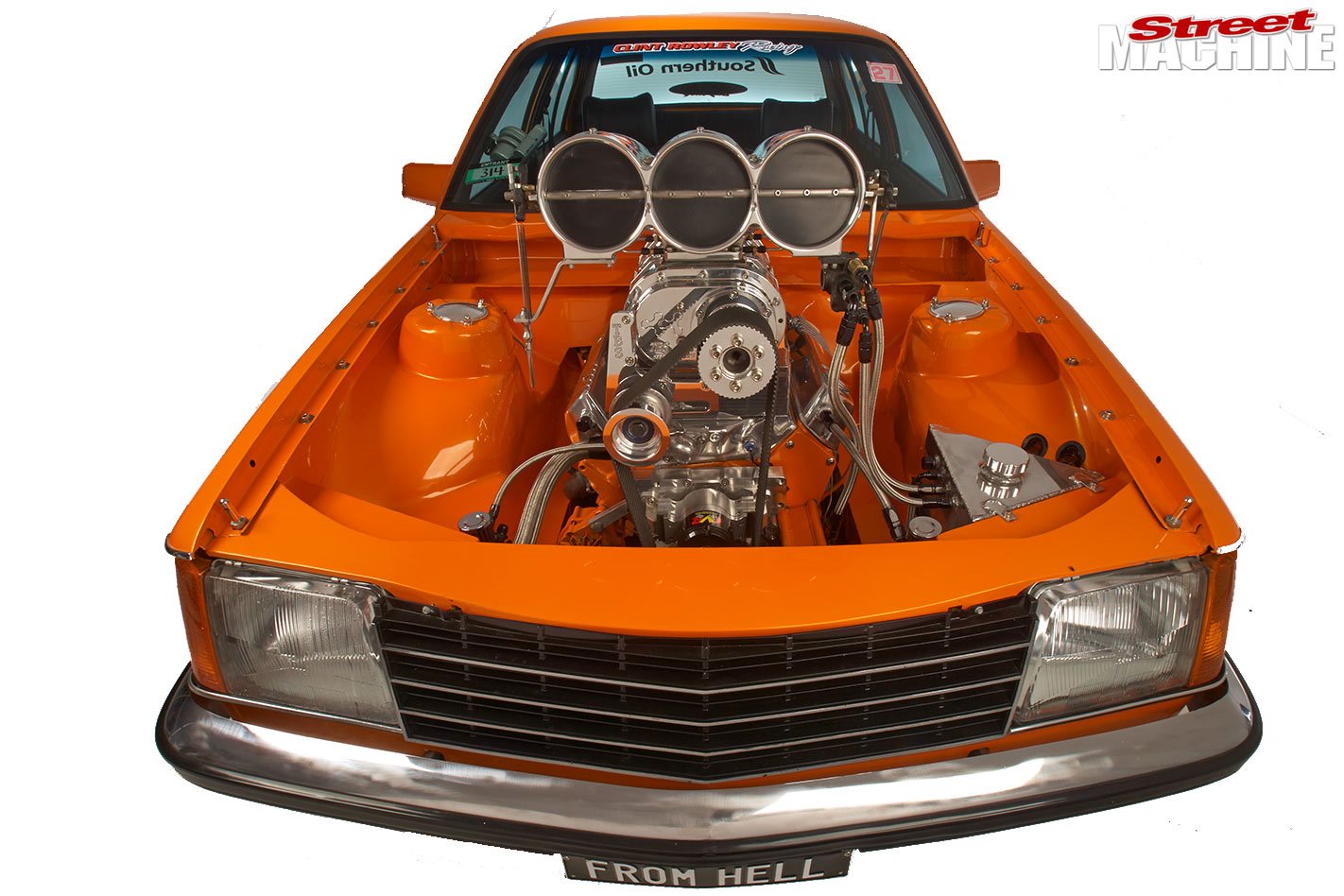 It pretty much just needed a new battery and an oil change.”

But Chris and Kirsten went further than that. They stuck in a mildly worked 308, lowered it, and drove it around on the street for six months. But its days as a street car were numbered when a gust of wind blew the couple’s fence into the driver’s-side door and front quarter. From there things started to snowball. 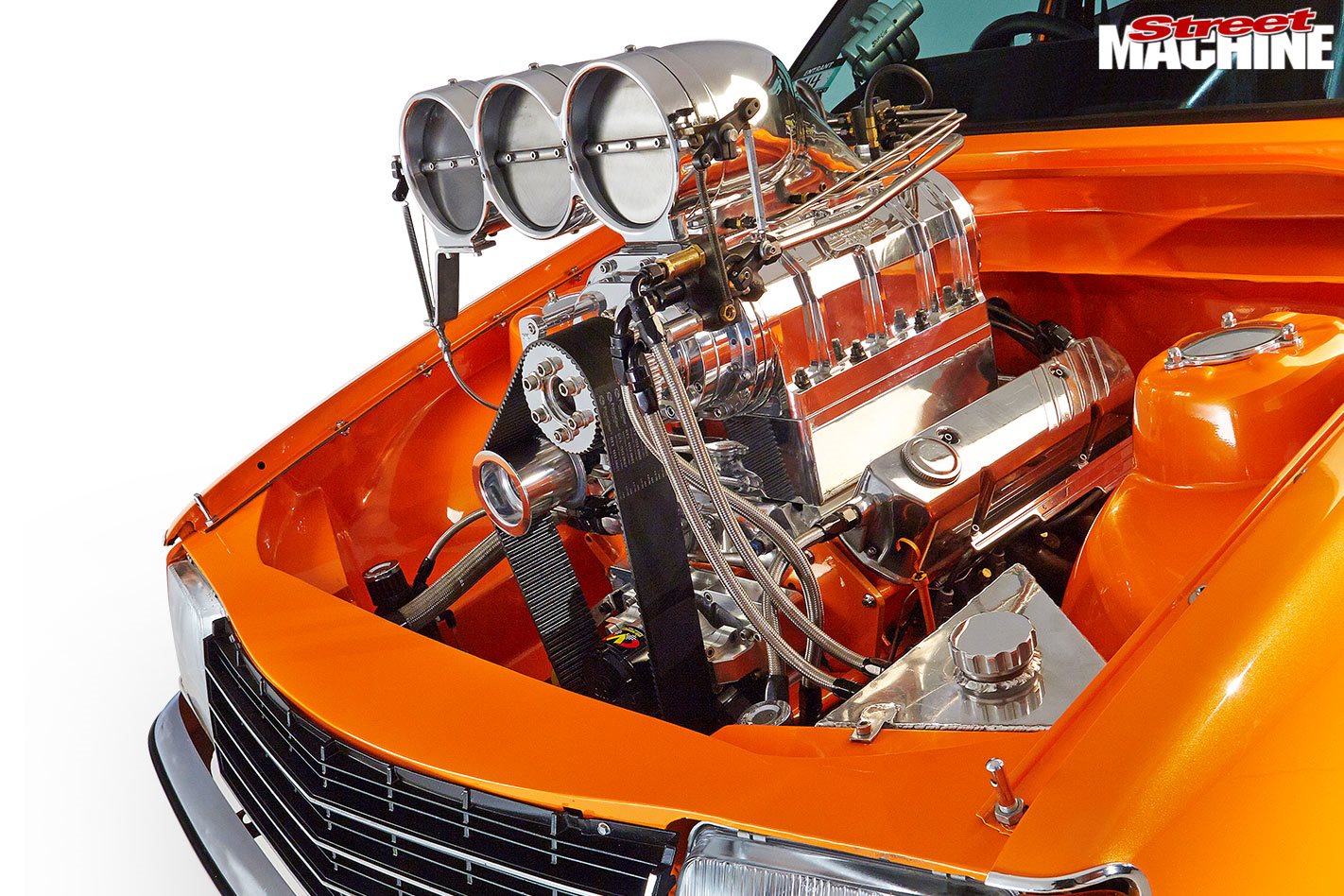 “I don’t think we meant for it to go as far as it did,” Chris says. “After it got damaged I put the rear clip in it with the tubs, just to do a few skids; then it was like: ‘If we’re going to do it, might as well do it properly.’”

Plans were formulated to replace the 308 with a methanol-burning 6/71-blown 355. For extra motivation, they set a deadline of six months in order to have the car ready for Summernats 26. 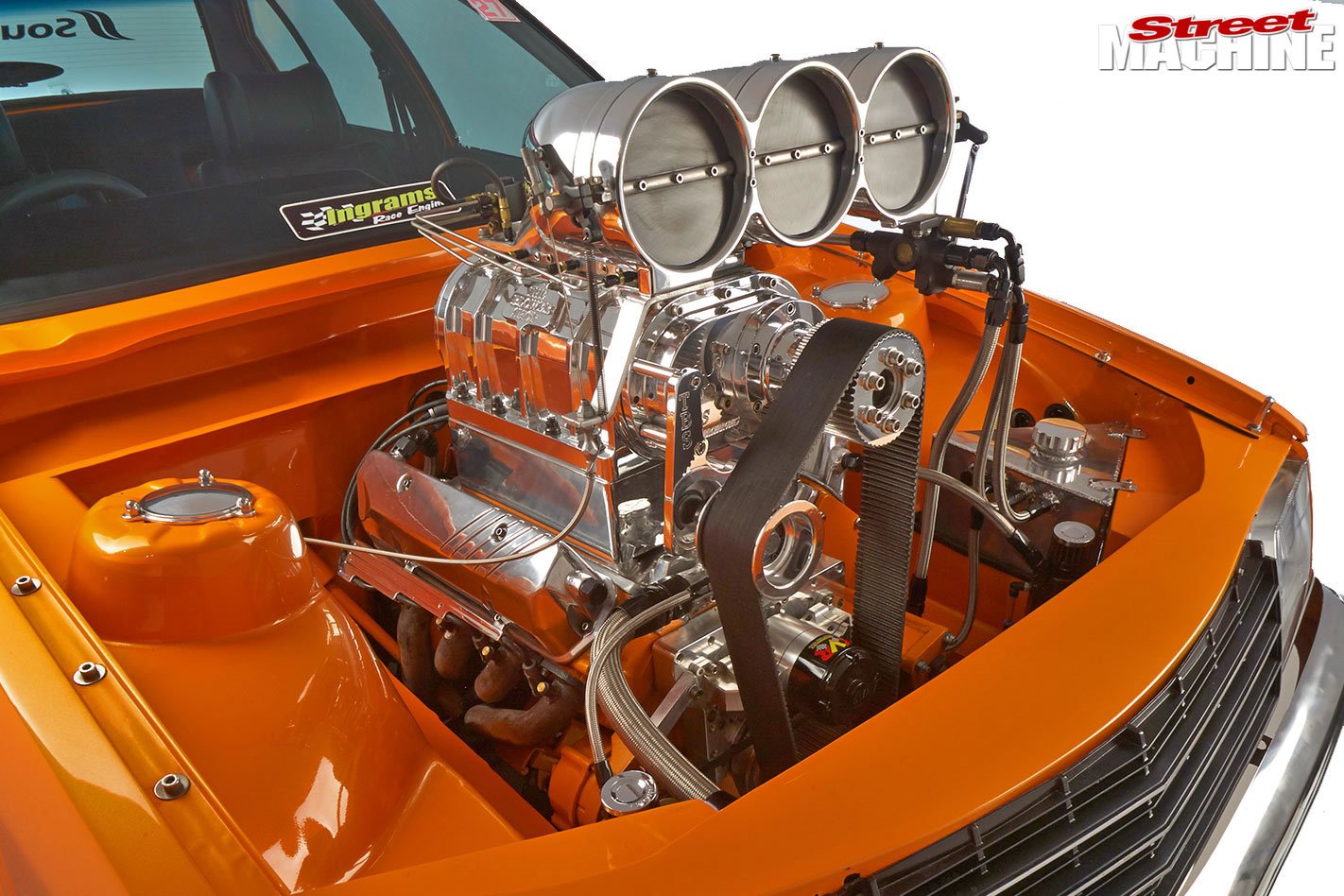 Chris handled the rear clip fabrication, smoothed the engine bay and body, and did the final assembly on the engine. Chris Ingram at Ingram’s Automotive Engineering helped prep the motor and Jesse Warran-Rigby at A Line Bodyworks applied the paint. But the biggest hand came from Clint Rowley, best known for his red Cortina burnout car.

“Clint’s a genius when it comes to methanol and blown stuff,” Chris says. “We would never have got to Summernats without him. At that stage I didn’t even know which direction the pump flowed, but he taught it all to me.” 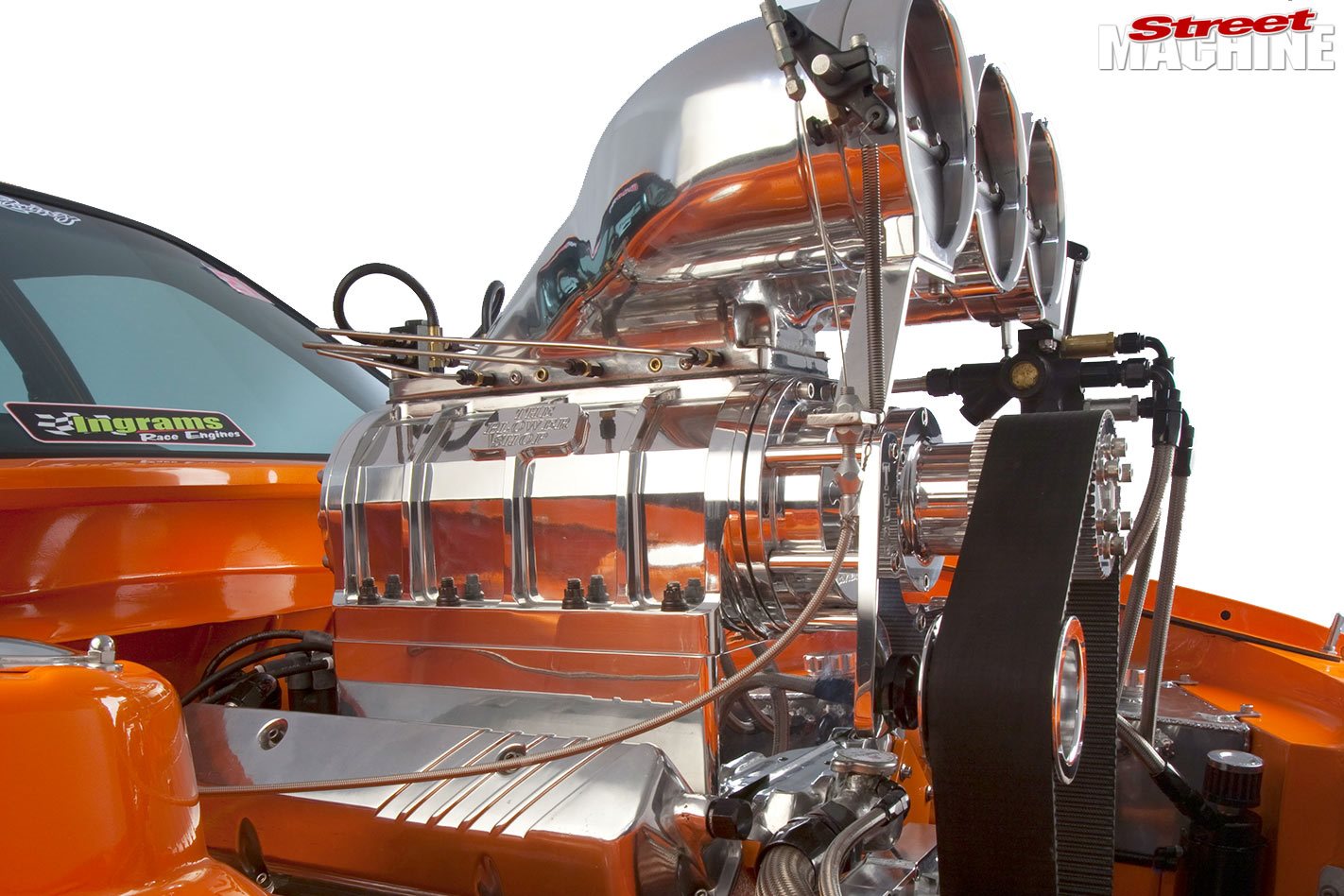 From Hell was first fired up at 3am at a local car wash in Wagga’s industrial area. Chris then spent 18 hours a day for the next two weeks to ensure it made its scheduled debut. He and Clint finalised the hat and meth set-up at the same car wash just four days before ’Nats.

“I was never 100 per cent that we were going to get to Summernats, but we’d put so much time, effort and money into it at that point,” Chris says. “The custom radiator got delivered a week out and it was the wrong size so I had to cut the radiator support to make it fit. Just little things like that came up. I was still putting stuff together on the interior when we got there.” 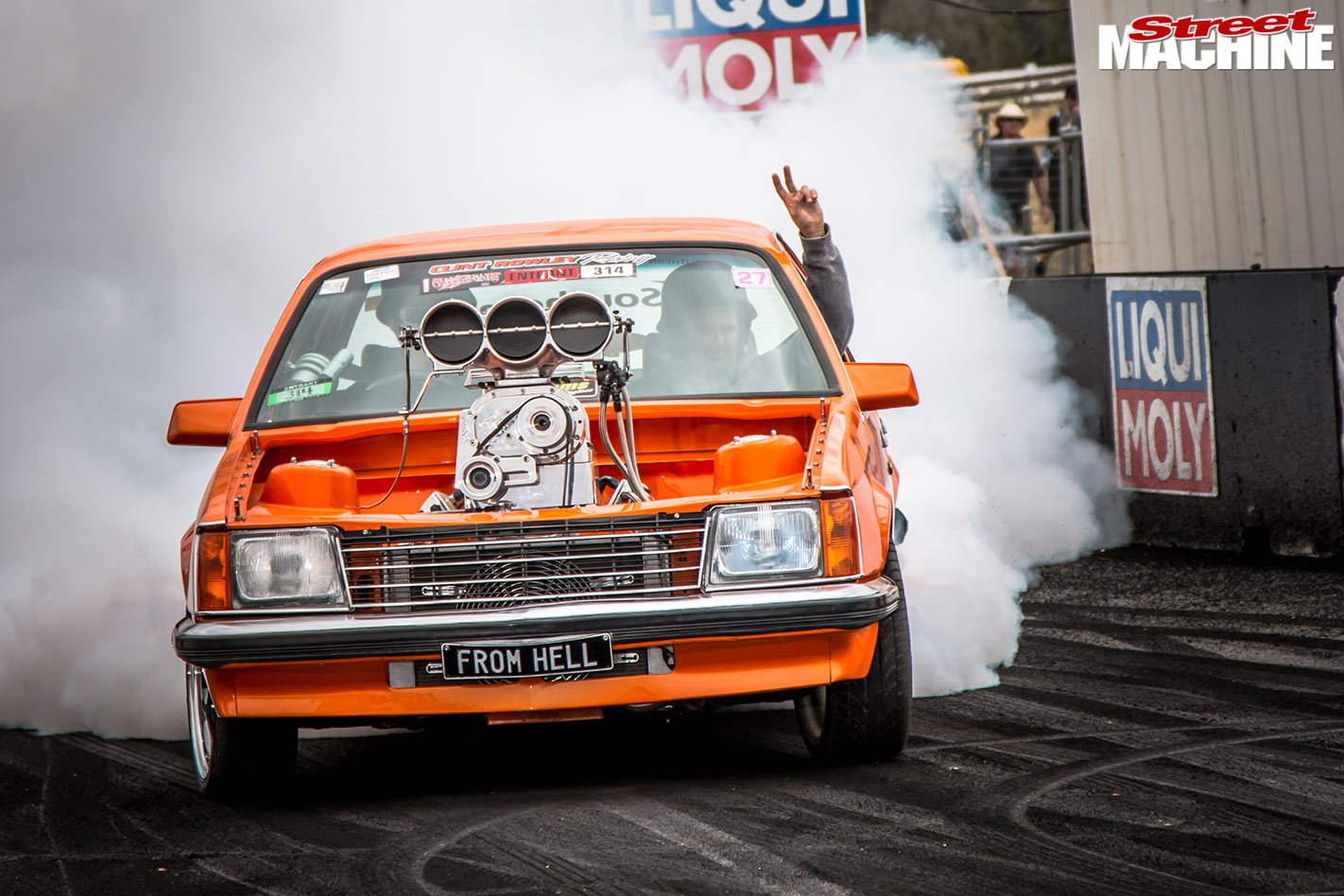 From Hell’s qualifying tilt at Summernats 27 was cut short due to methanol spraying out of the fuel lines on the injector hat. “I shat myself when I could feel cold liquid on my face,” Chris says. “Then it went up in flames and I shut it down. It’s not worth it, especially when you’ve got other people in the car. I wouldn’t wish a methanol burn on anyone, let alone be the cause of it”

Considering the mad dash to the finish, From Hell did well to take out the Power To The Max trophy in the Show ’n’ Shine.

“Aside from the birth of our son, Haedes, this was by far one of our proudest moments in life,” Chris says of winning the award. 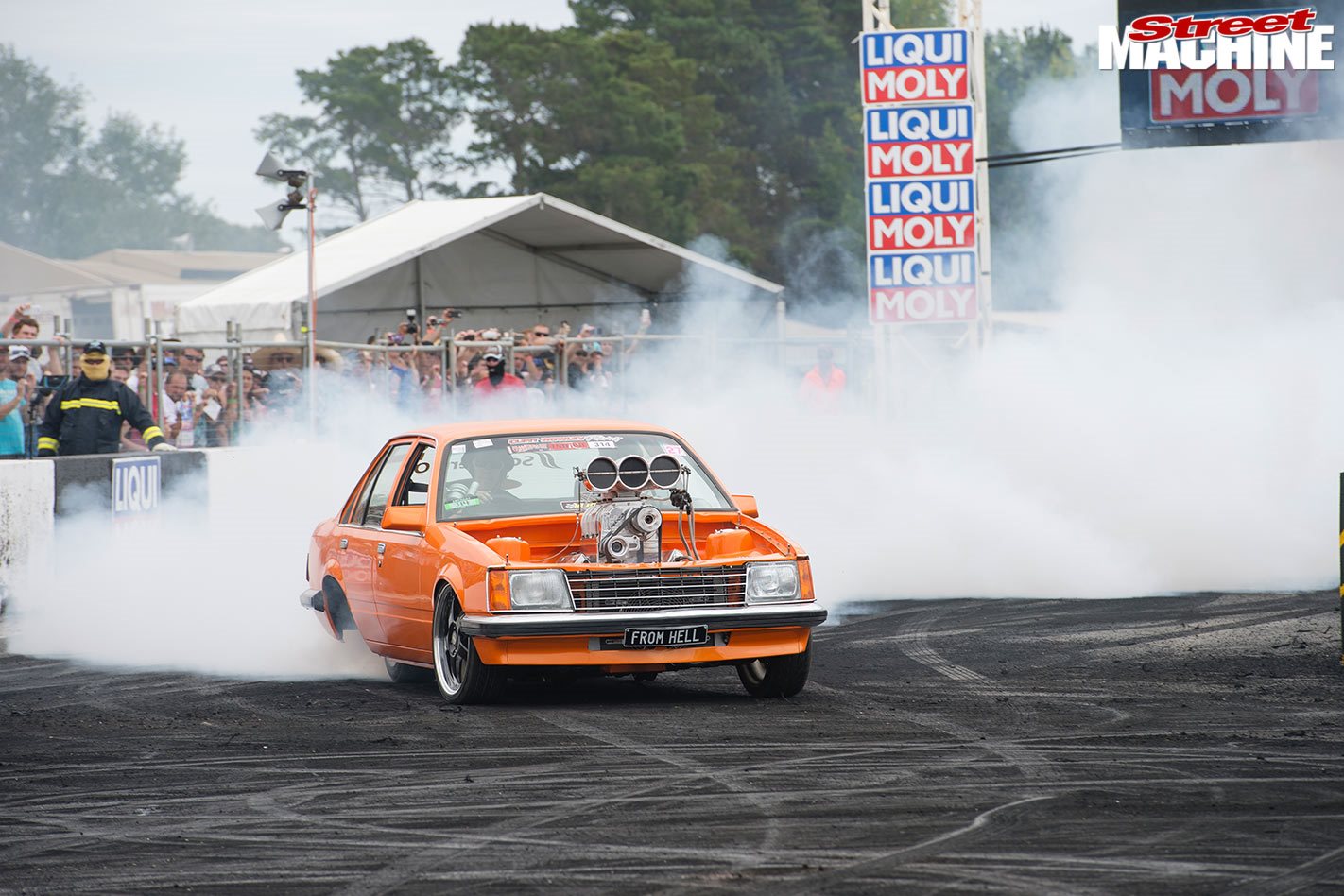 Having only cruised at Summernats 26, the vastly improved From Hell was back in Canberra this year, only this time to skid.

Going slightly against the grain, the car was running the Holden V8, when most at the pointy end of burnouts are powered by Chev or LS motors.

“I had a lot of Holden stuff already, and I love Holdens,” Chris explains. “To me they sound better than a Chev and a lot better than an LS, probably because they’ve still got the iron block. I had mates that had done Holdens and they got them to work fairly good. But they’ll never be as good as a Chev – they’re just not designed right.” 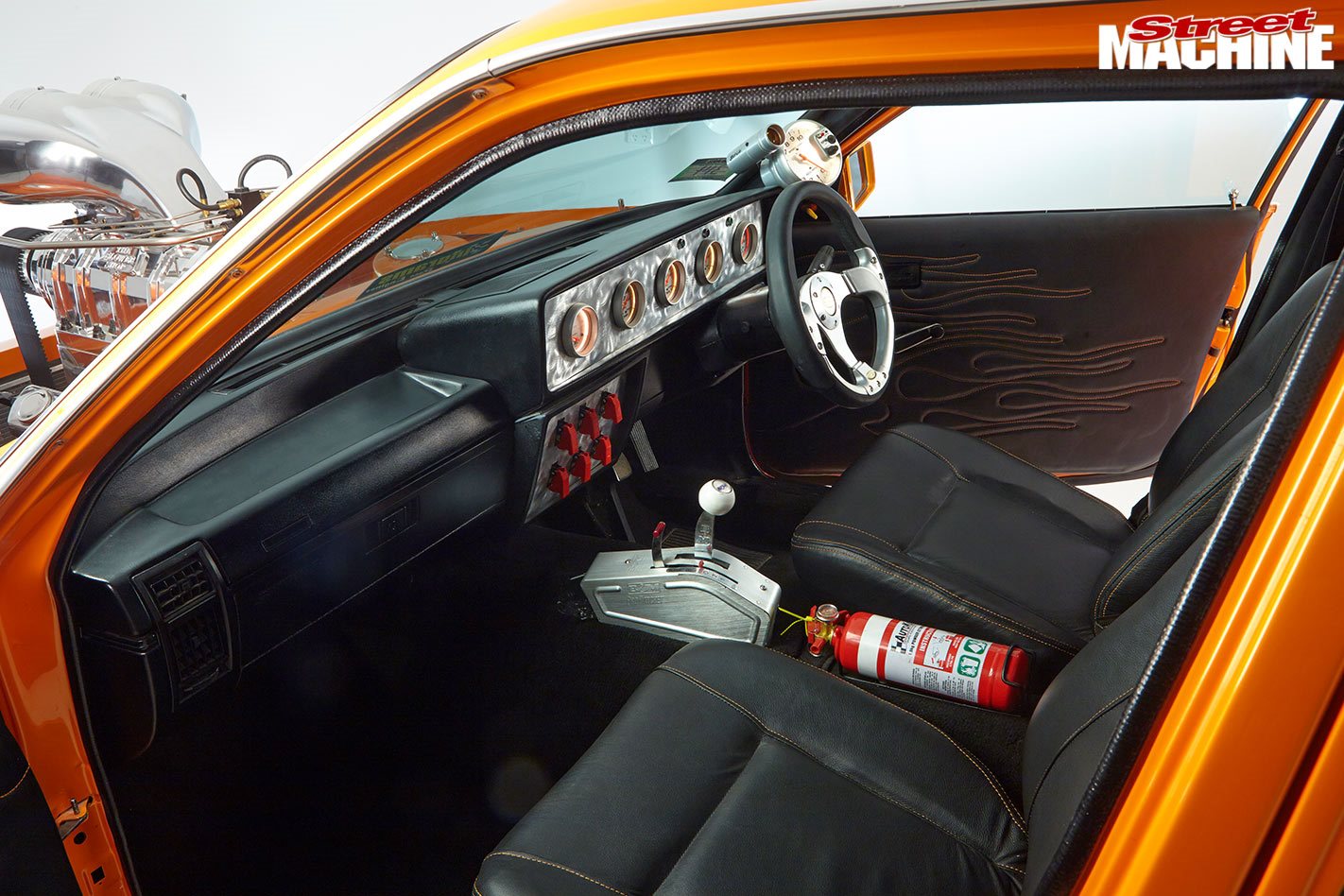 Catching fire at Summernats 27 and then completely blowing the motor at TUBC at Avalon in March has caused a recent rethink.

“I was probably asking a bit much of it,” Chris concedes. “The engine is now getting redone and then it’ll go into a new car for Kirsten. We’ll put it in a bit tamer than it was – a bit less boost – and she’ll use it for Powercruise and Summernats. Not so much for skids.”

The plan for Kirsten’s car is another early Commodore, most probably a VH. It will receive the rebuilt From Hell donk and the aim is to have it completed for Summernats 29. 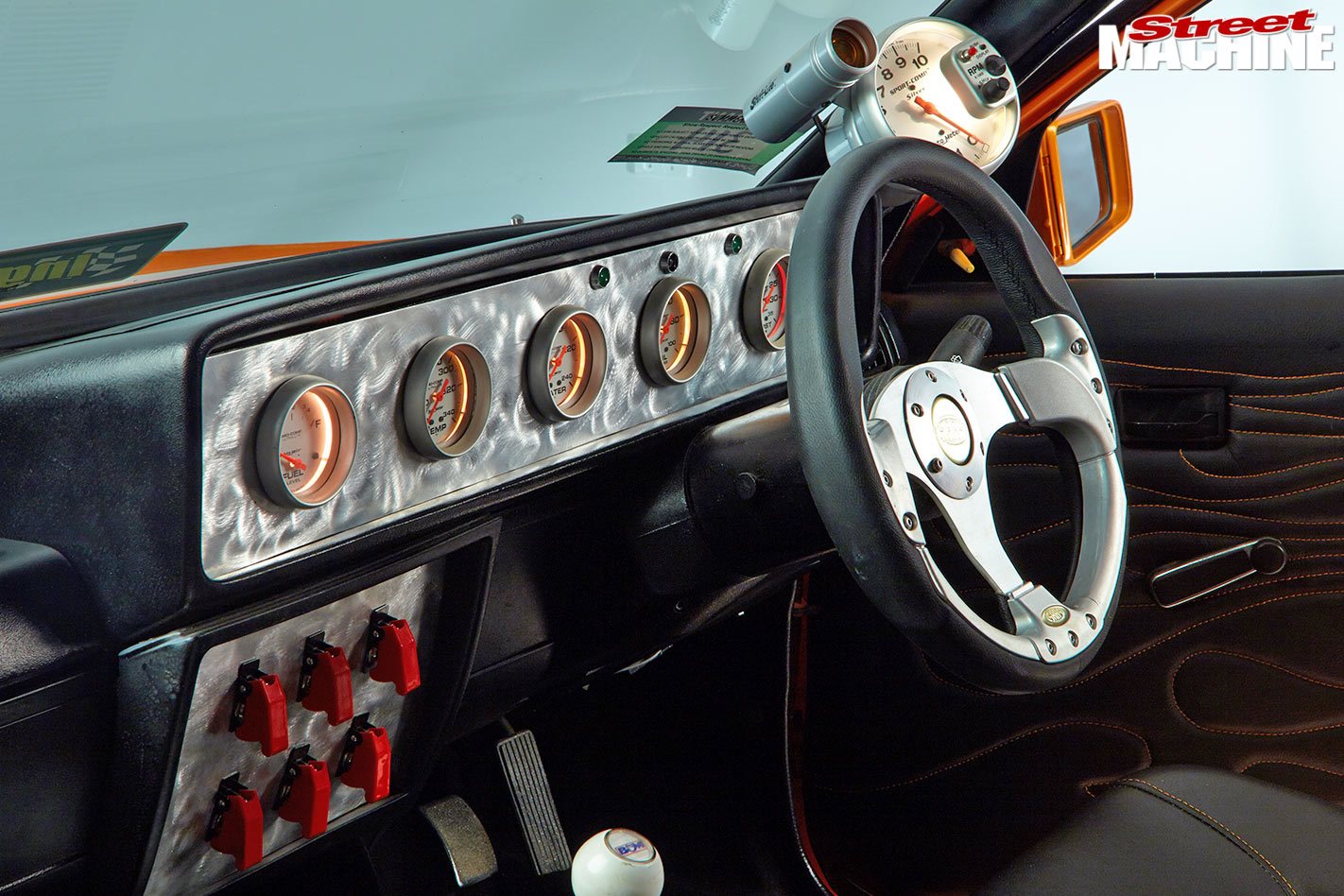 As for From Hell, it’s getting ready for a comeback in a slightly different guise. A 508 big-block Chev is being built by John Pilla at Powerhouse Engines, and Chris is looking forward to debuting the new set-up at Burnouts Unleashed at Queensland Raceway in August.

THANKS
From Hell would never have made it to Summernats 26 without our generous sponsors, Southern Oil and Southern Waste Oil Collection Services, Wagga Wagga. Thanks must also go to Clint Rowley; Chris Ingram at Ingram’s Automotive; Jesse Warran-Rigby at A Line Bodyworks; Auto One Wagga Wagga; Riverina Jetcut; Luke Pendergast at Pendergast Automotive; Shaun Morton; Chris Ridgewell; Adam Mutimer; Cookie; Superduty Engineering; Steve Bowdren; Matt Shuttleworth; and all our other mates who have helped out along the way