Don't judge a book by its cover - this VK Commodore skid car may not be a genuine SS, but it does have an unusual HDT performance pedigree.

YOU’D be forgiven for thinking Steven Schultz’s VK Commodore is just another HDT Brock SS mock-up. However, it actually does have some bona fide HDT DNA. A motor mechanic from Port Lincoln in South Australia, Steven stumbled upon an interesting piece of Holden history when he swapped his VS wagon for this VK sedan several years ago.

“The car isn’t actually an SS,” Steven says. “It’s an SL Commodore but it went back to HDT and had the 134 pack installed.” For those who aren’t up on their HDT terminology, back in the 80s the 134 pack involved the retrofitting of leftover Brocky performance parts to an otherwise stock five-litre V8 car – kind of like a factory mock-up. 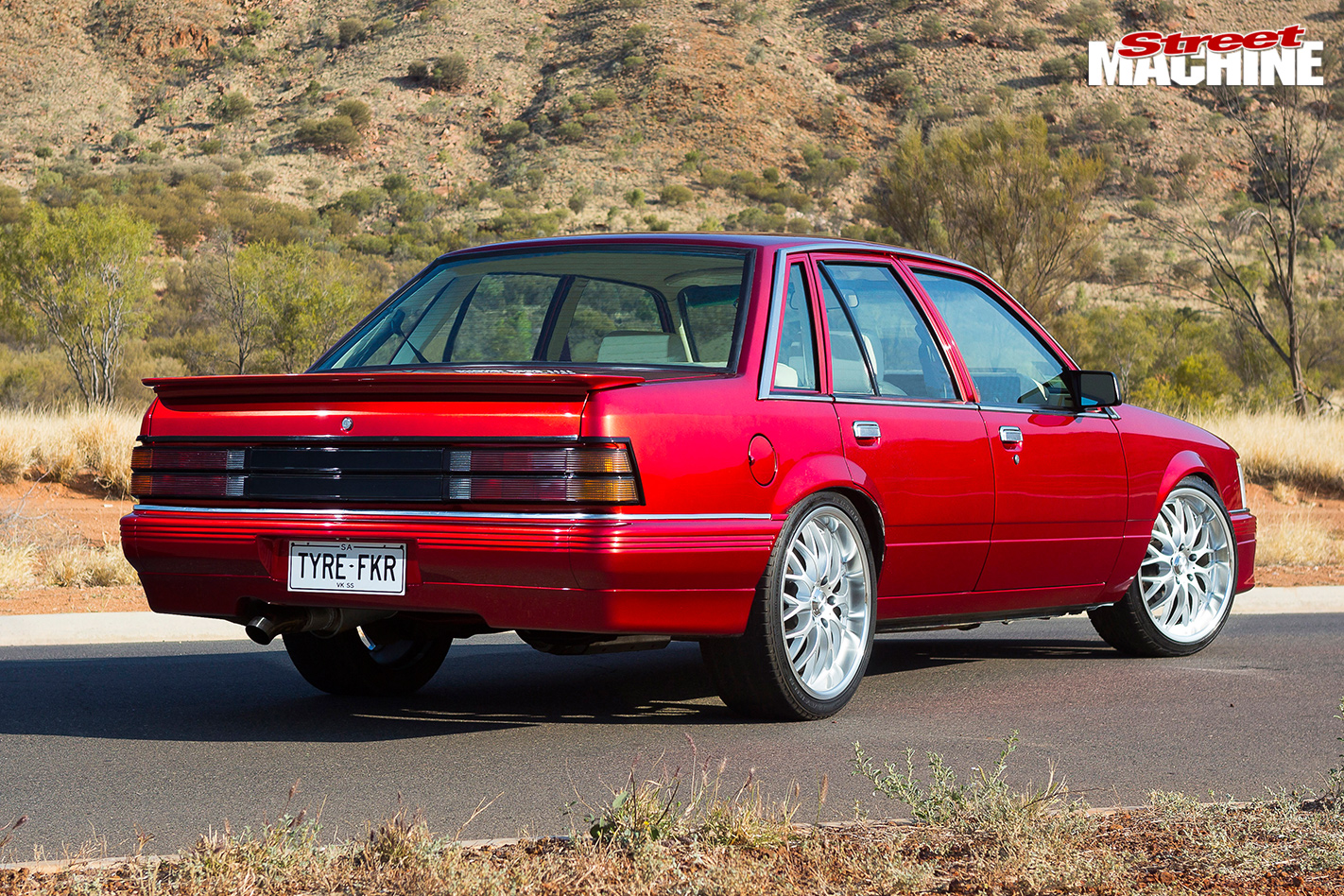 Steven drove the HDT half-caste around as his daily for a few years, but as the story so often goes, one thing led to another and the car was pulled apart for an 18-month rebuild.

Staying true to the Lion-hearted heritage of his ride, Steven built a new engine based on a Holden V8 boasting 304 cubic inches. It runs a stock crankshaft rotating in a set of King bearings and is fitted with stock VN-style rods wearing Hypatec 10:1 flat-top pistons and Hastings moly rings. The crank assembly has been fully balanced and is kept lubricated via a JP standard-volume oil pump drawing from a High Energy sump, while oil temperature is managed by a cooler with fan hidden in the left front inner guard. 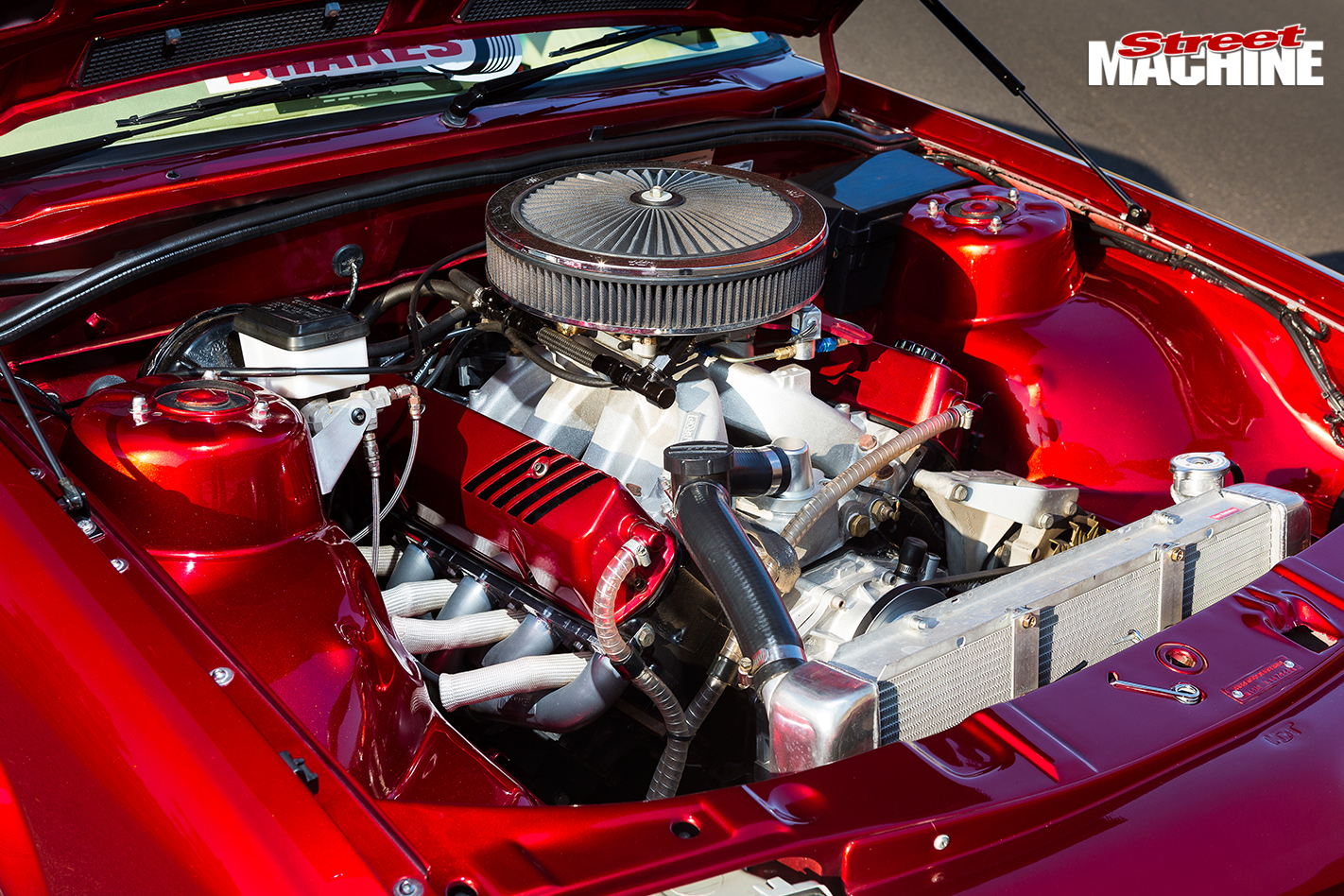 Up top there’s a Harrop inlet manifold running a Holley 750 HP carburettor plus a 100hp plate-type nitrous system mounted on a set of cast-iron EFI heads fitted with stainless valves and LT1 Chev springs. Timing is managed by a Crane 286 bumpstick working with Johnson lifters and Lunati pushrods.

Premium 98-octane fuel is pumped from the boot-mounted cell by a Holley HP125 pump, while a NATRAD high-performance radiator keeps everything at peak operating temperature. A set of 17/8-inch ceramic-coated Pacemaker extractors flow waste gases through to a single three-inch exhaust. 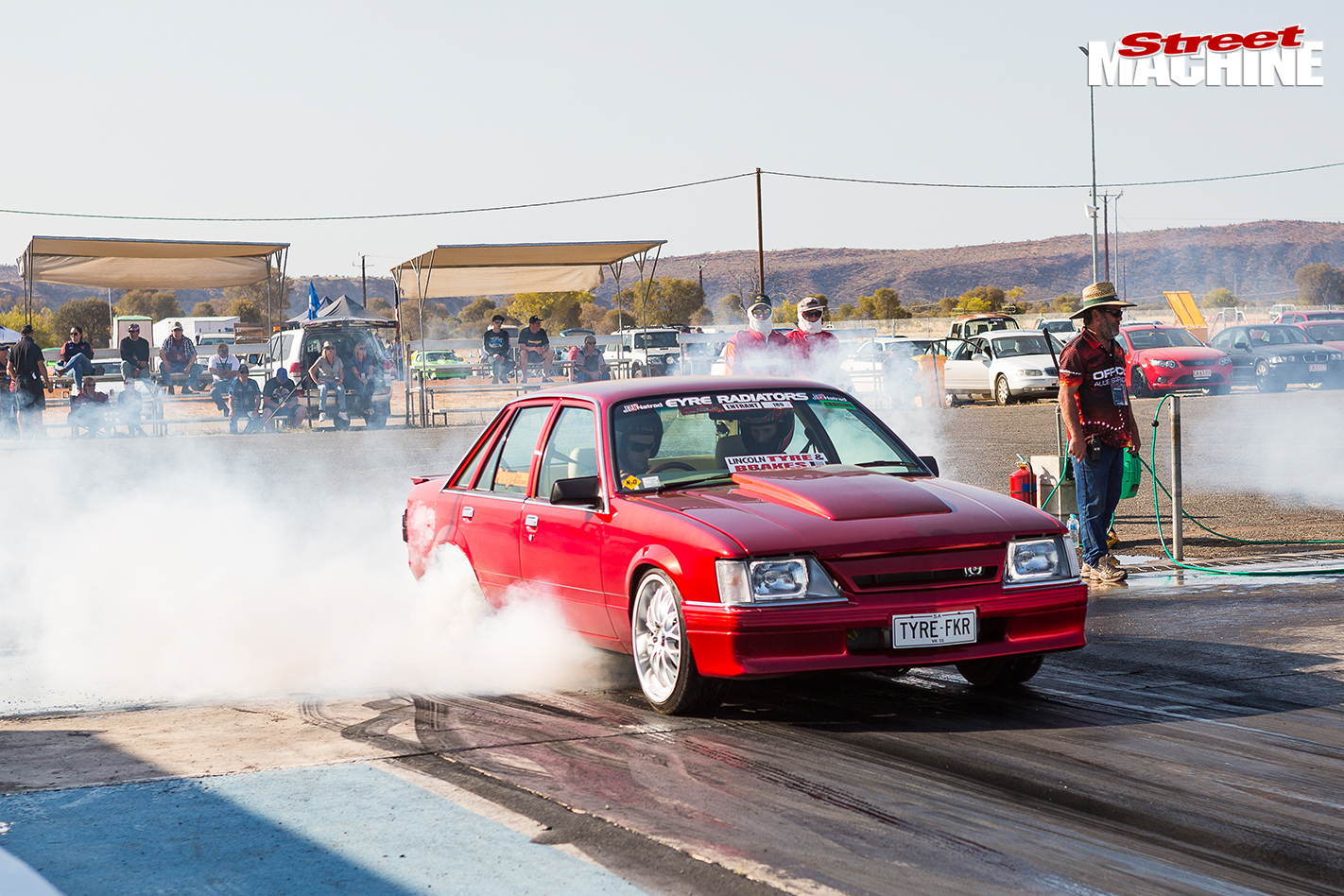 Backing up the Holden bent-eight is a Turbo 350 slushbox that has been beefed up to cope with all that tyre-frying power through a set of upgraded clutches and bands. It also runs a shift kit and a TCI 3000rpm converter, and feeds power rearwards via a two-piece tailshaft to the spooled nine-inch diff with a street-and-strip-friendly 3.7:1 ratio.

Inside the cabin, Steven upgraded the front buckets to VS Commodore items and initiated a full retrim of the stock interior in synthetic leather. “A few people said I was a bit crazy for doing it because it does get used for skids and stuff,” he says, “but it works well with the car.” Peter Mueller handled the stitching duties and the tan faux hide is a great contrast to that candy red exterior. A wooden Momo tiller gives a nostalgic nod to the car’s 80s provenance, and an Auto Meter Shift-Lite tacho keeps Steven alert to engine revs and gear changes, the latter being handled by a B&M Pro Stick shifter. 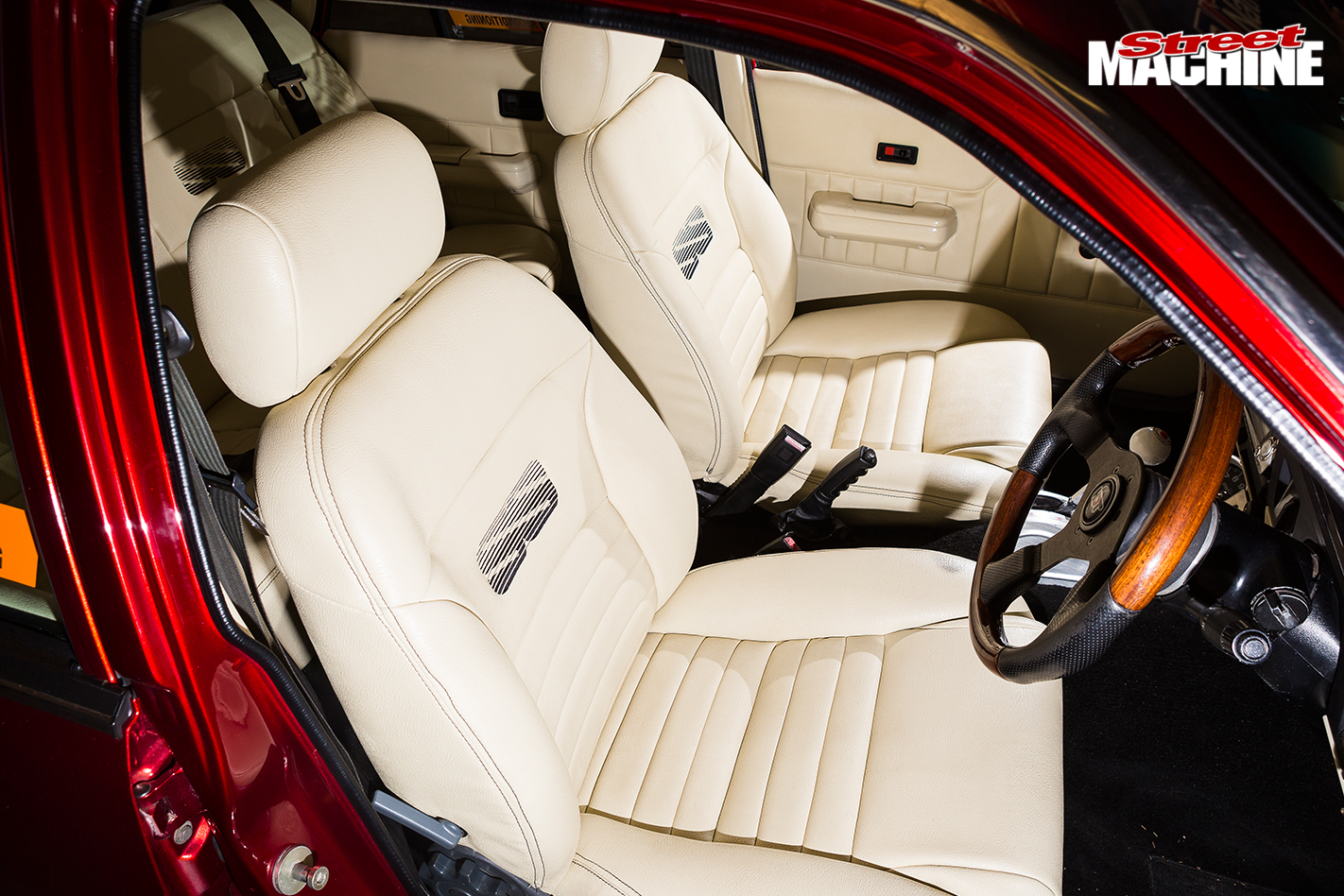 The embroided SS emblems provide an important link to the car's HDT heritage. Steven also had the factory HDT Momo steering wheel wrapped in matching synthetic leather, for street use

According to Steven, the body was in fair unrestored condition when he got his hands on it, but Ian Grocke at Coffin Bay Smash Repairs helped whip it into much better shape, performing a few obligatory rust repairs, smoothing up the engine bay and moving the battery to the boot. Jono Osborn took over at this point, laying down the PPG Vibrance O-So-Sexy pearl paint. And who could argue with the colour’s name? It does make a good body look great.

“Originally I was going to do a Group A mock-up and paint it Formula Blue,” Steven says. “But most of the car went back to bare metal, and I thought if we’re going to do a full respray, I should maybe have a look at some fancy colours. It sort of snowballed from there.” 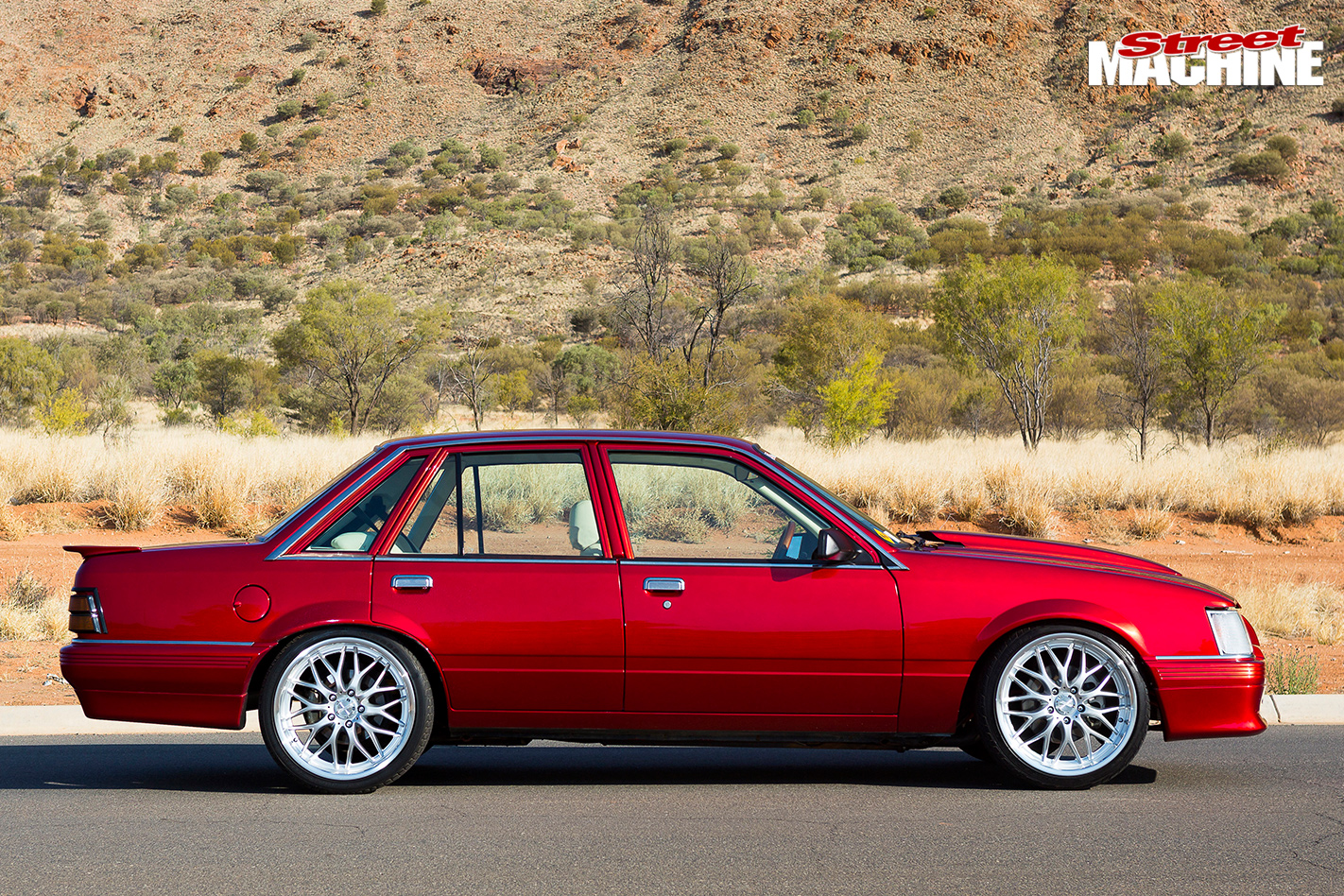 After wading through the plethora of options in the PPG colour charts, Steven settled on O-So-Sexy pearl

Underneath that flashy exterior, Steven upgraded the ride with a set of King SL springs all ’round, working in tandem with Monroe shocks and Nolathane bushes. The rack-and-pinion steering system has had the power assistance removed, and out back Steven installed an adjustable Panhard bar. Brakes are standard in the rear, but have been upgraded in the front with a set of VZ Commodore slotted discs, twin-pot calipers and braided lines. A set of Speedy Cheetah rims – 19x8 inches all ’round – were chosen to complete the build, fitted with Sonar 235/35R19 rubber up front and Auto Grip 245/35R19 hoops at the business end.

Steven was excited to make it to the recent Red CentreNATS, where we seized the opportunity to snap these pics. The Port Lincoln convoy included four of Steven’s mates and involved a 3300km round trip, but sadly some electrical gremlins robbed him of the opportunity to skid the car at the event. “To be honest, I was gutted,” he says. “We got on the drag strip and did a burnout, got into top gear and the engine cut out and wouldn’t start for another 45 minutes.” 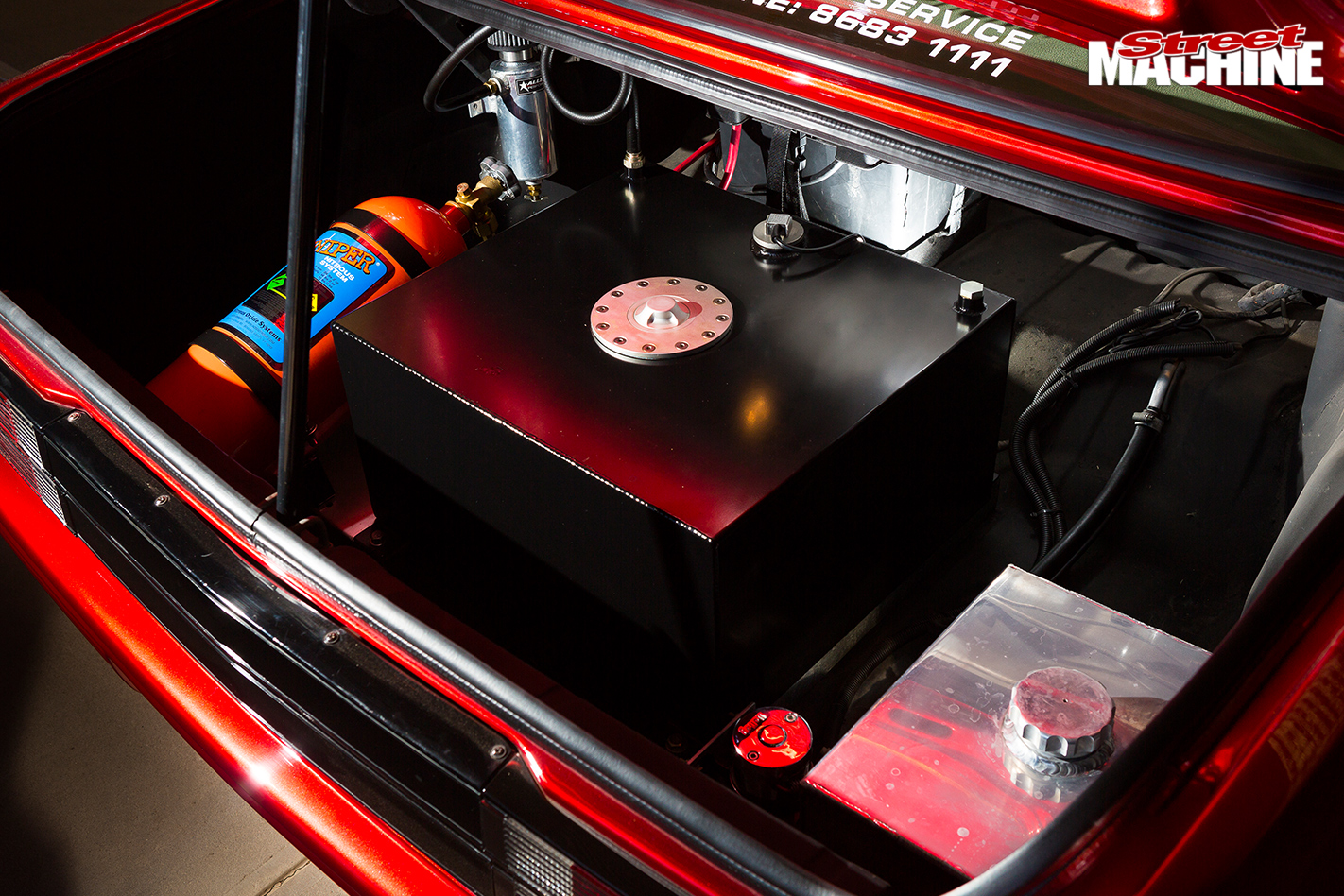 Despite this setback, the silver lining for Steven was being able to support his mates throughout the event. “It was a really great show,” he says. “The effort people had put in! We just grabbed a heap of cans, sat on the hill and enjoyed the show.”

Two young kids and a mortgage don’t leave a lot of spare time or money for burnout comps, so Steven’s future plans for the VK involve a bit of ‘de-tuning’ to transform the car into a family-friendly cruiser. “Competing in the burnouts is never-ending,” he says. “You always need to upgrade and spend time on it. I’m getting a bit over wrecking the car, too. I just want to use it with the family for a while; I’ll build another car later on if I’m still keen for the skids.”

Sounds like a fair call by this custodian of an unusual piece of Australian automotive heritage. s may not be a genuine SS, but it does have an unusual heritage.