Dumped, thumped and with trumps poking out of the bonnet – this is one helluva VN

IT RUNS a 370-cube powerplant, steamrolls the street on 22-inch rims and wears it heart on its chest with those mean-looking injection trumps. Michael’s VN is not only about go – but has the looks to warn onlookers of its 11-second quarter potential. 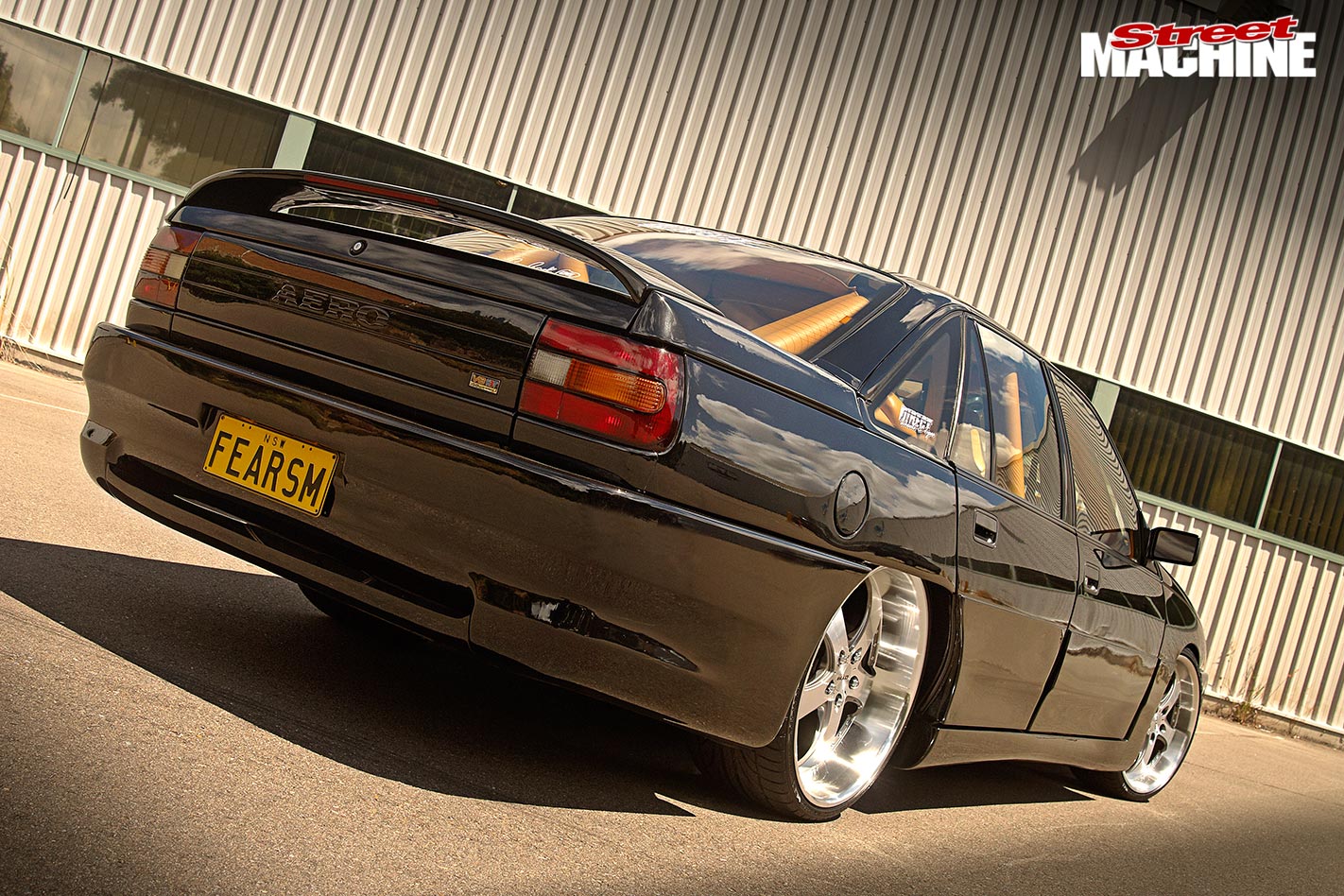 The VN – now running a VP front end for a unique overall aesthetic – has been a part of his life since his days training to be a mechanic at tech. “A guy there owned it, and I loved it, but I thought it was way out of my reach,” Michael admits. Michael’s Corolla – his very first car –had been built into a showstopper over about eight years. But the temptation was there. “I’ve always wanted a V8. A lot of my mates are into turbos, but one of them told me the owner of the VN was selling it, so I rung him and bought it.” 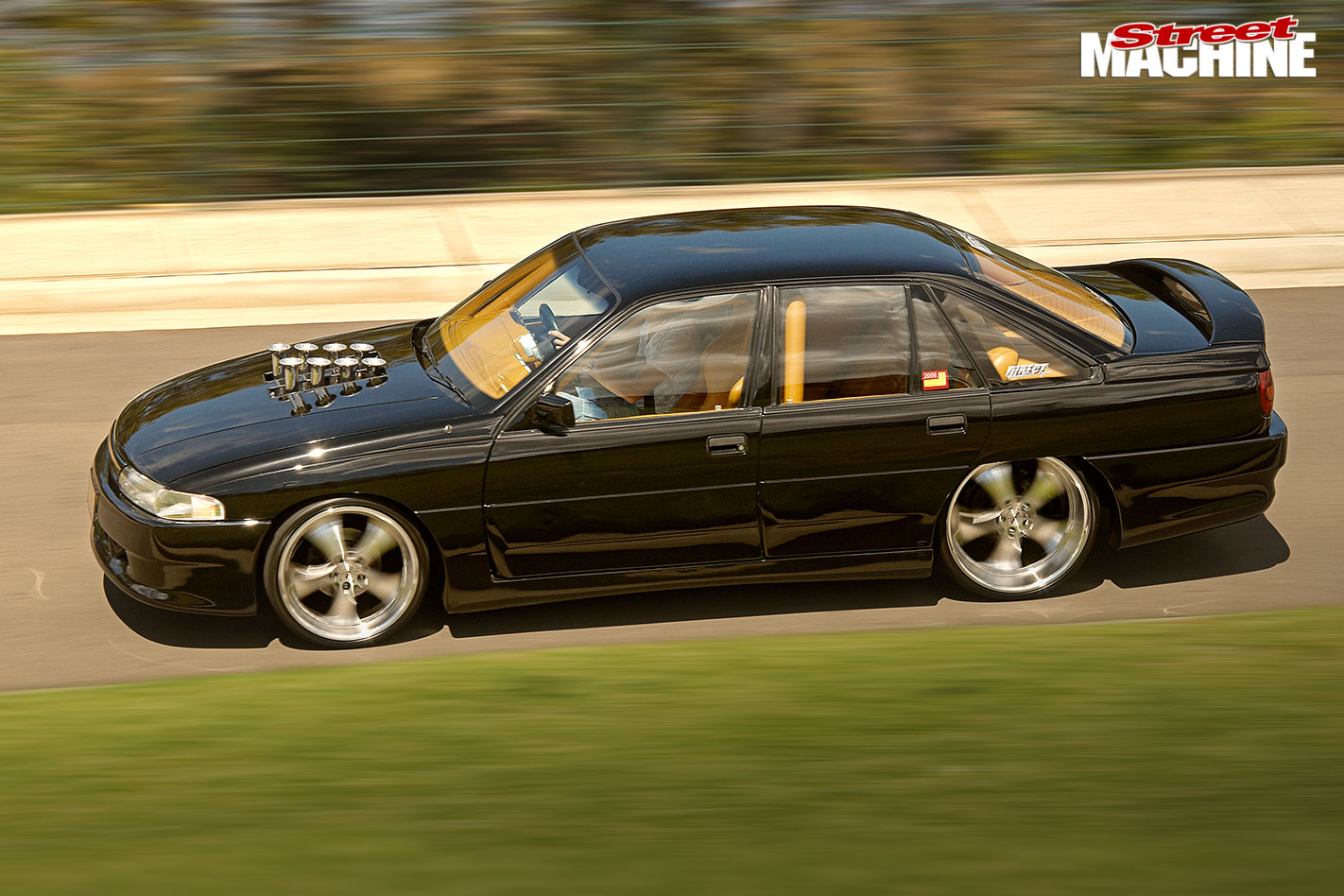 The VN was a looker, but it was more of a sheep in wolf’s clothing, running a stock 5.0-litre with an aftermarket air filter its only mod. The interior was as you see it now – fibreglass dash, yellow Aerotech seats and Auto Meter gauges. The bodykit was there, and most of the bodywork you see now, including the mini-tubbed rear, accompanied by a set of Simmons wheels. “It had a show finish, but it lacked any anger. The driveline needed a bit of TLC.” 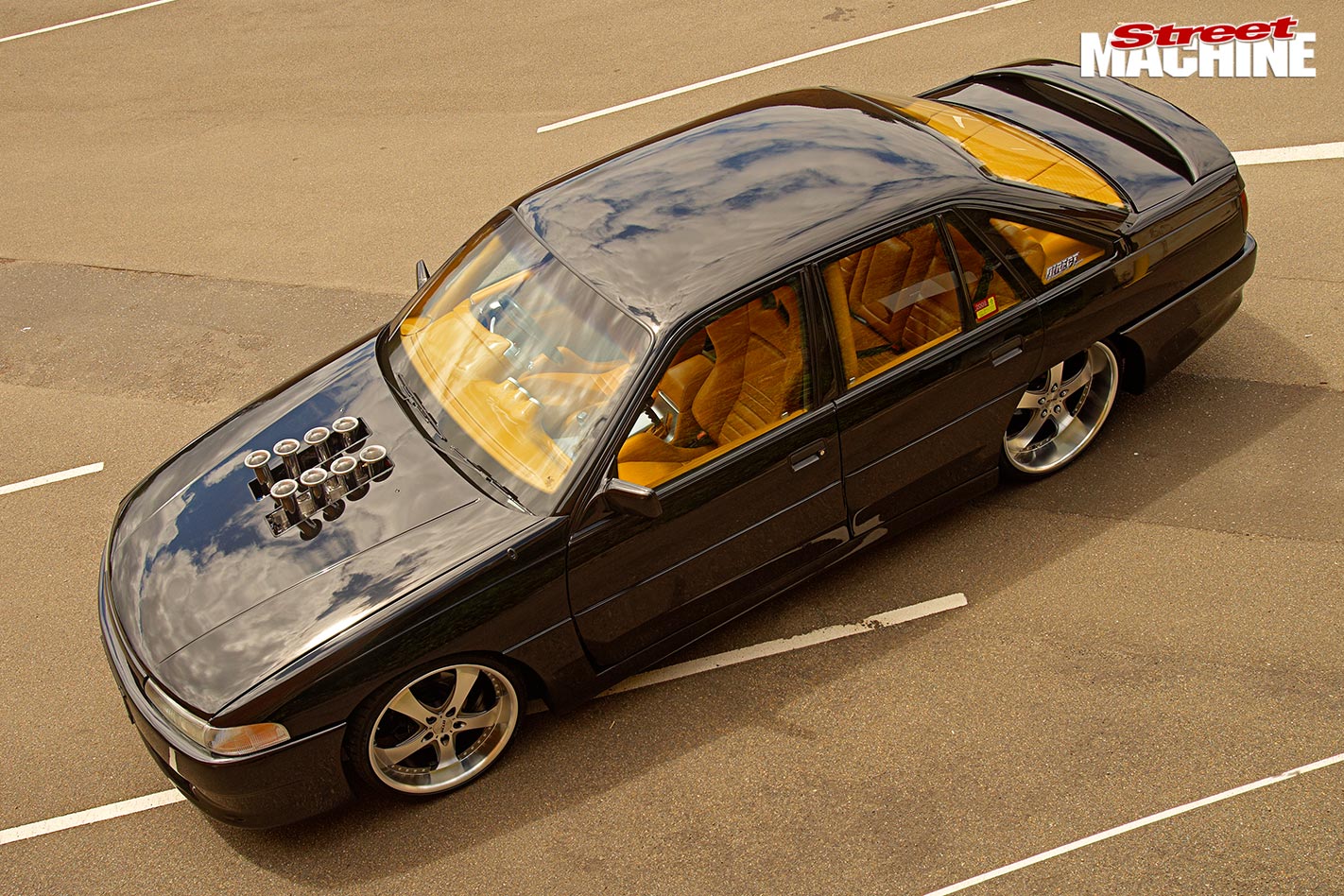 Michael drove the car around for a few months, but it was in bad need of decent brakes and suspension. A set of VL Turbo rotors with VY calipers were bolted on up front, while a replacement steering rack was also fitted. A custom four-link rear has been matched to Pedders Gas Ryder shocks and Pedders springs to give the VN a better, firmer ride. “I fitted the suspension myself, as I was a mechanic for seven years. I would’ve done a more race set-up, but I didn’t realise I was going to go so hard on the engine.”

Yep – the carpet doesn’t match the curtains, Michael reckons. And it was never meant to. “It was just going to be a Walkinshaw manifold and cam … from there, well, you know what it’s like! It was to be off the road for a month, but we’d be sitting around with the boys who kept saying ‘while it’s out, why don’t you do this?’ The engine builder was lovin’ it – I just kept ringing him up!” 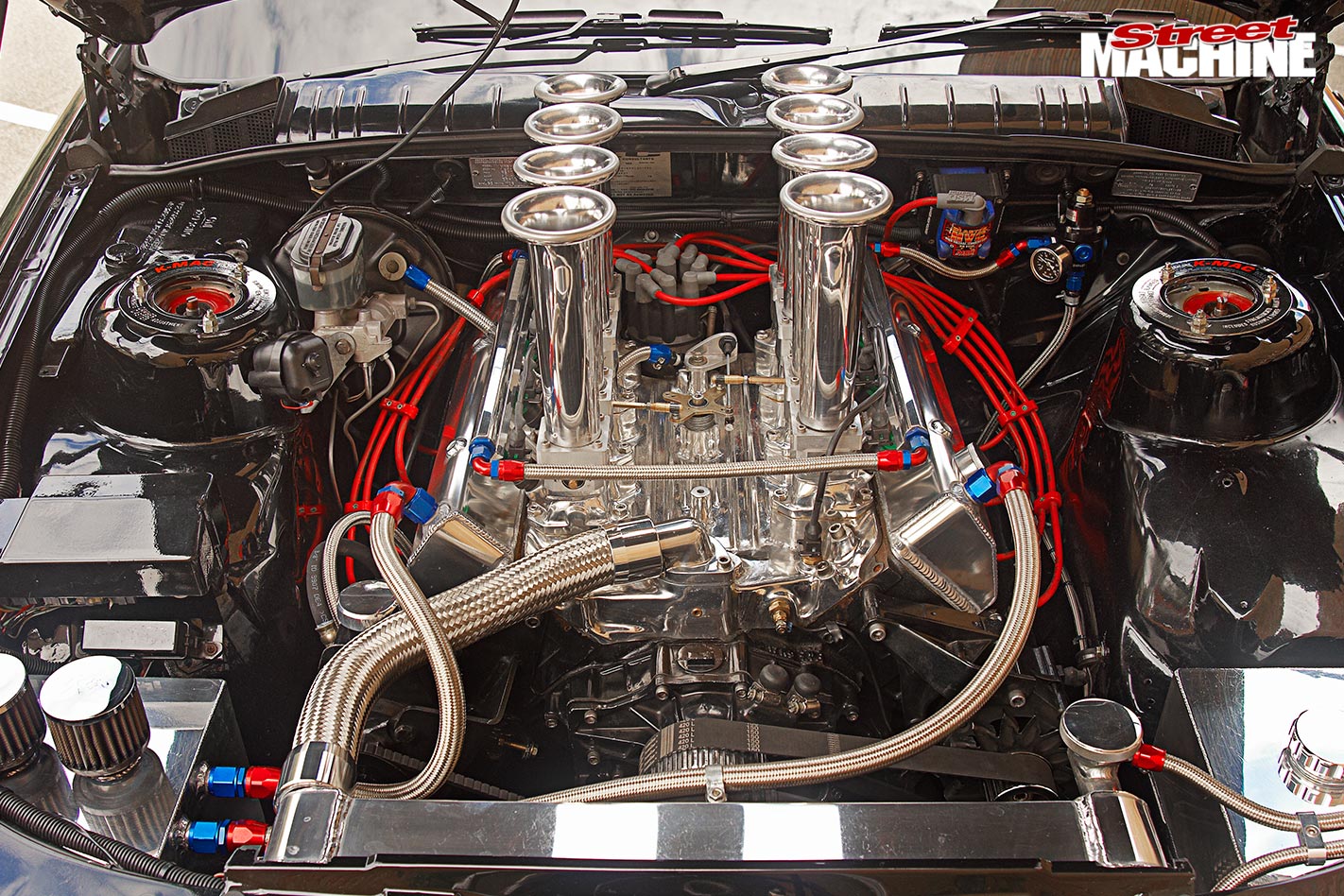 Michael went out and bought himself a VL Calais daily driver while the 5.0-litre went from stock to stump-puller. Added to the list were a COME crank, with SRP pistons on Eagle rods. “I intended to go 355, but I got a different diff, then we reworked the crank to suit Chev rods and pistons; that took it out to 370 cubes. Then we did the oil pump, cooler, fuel pump…” The battery’s been relocated to the boot, making way for the remote oil cooler with a massive Mellings-fed 8.5-litre sump “so that if you’re pushing it for a while, it gets good temperature and keeps good pressure.” 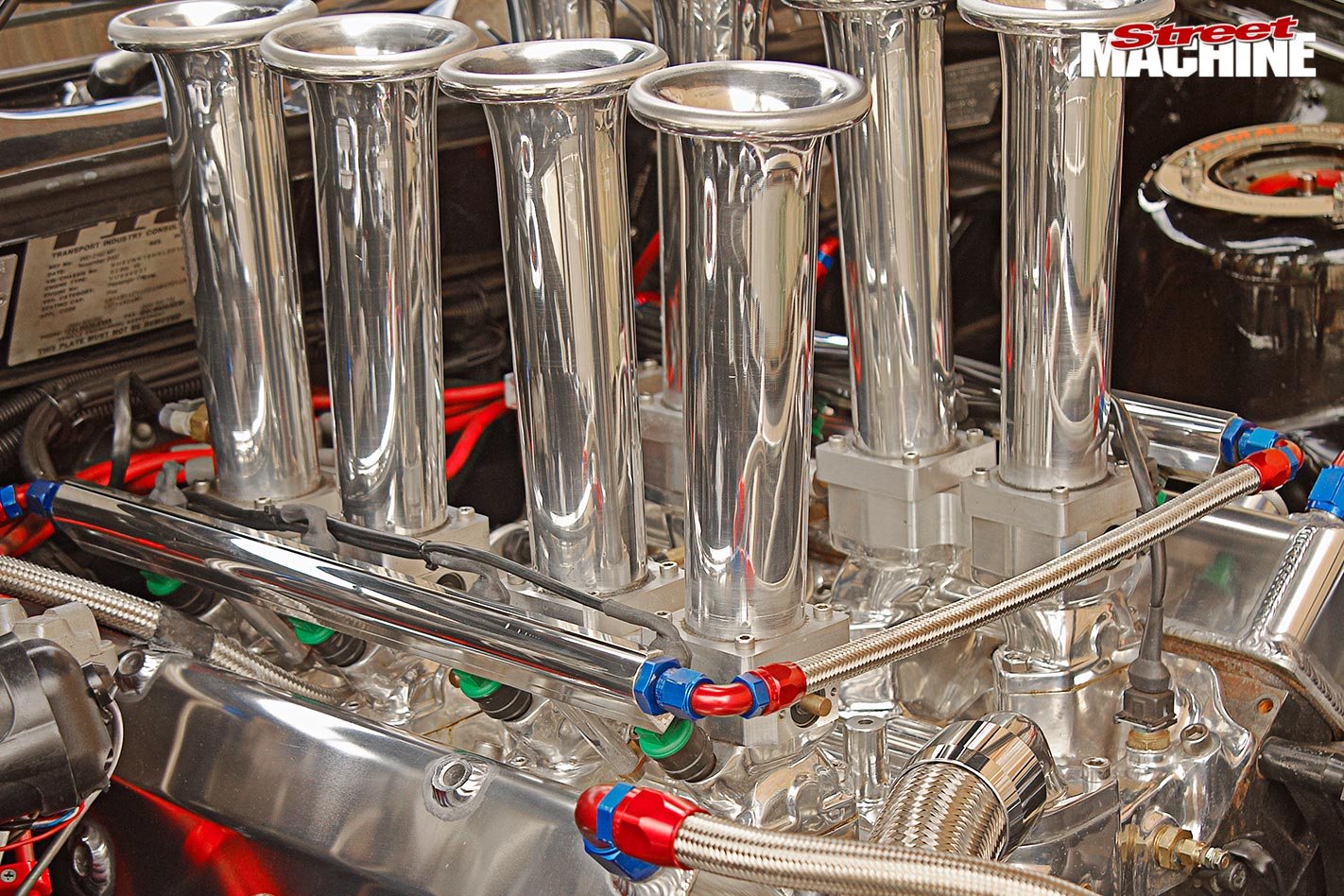 Manley valve springs and stainless guide plates have been fitted, while Crane solid lifters and the Competition solid cam give the VN a mean growl. And of course there’s the massive throttlebodies – one for each cylinder – barking out of the bonnet.

The engine’s mated to a T5 five-speeder, the car’s third gearbox. “Believe it or not, when I got it there was a Ford toploader in it” Michael laughs. The driveline is completed with a shortened a Detroit locker and custom single-piece tailshaft. 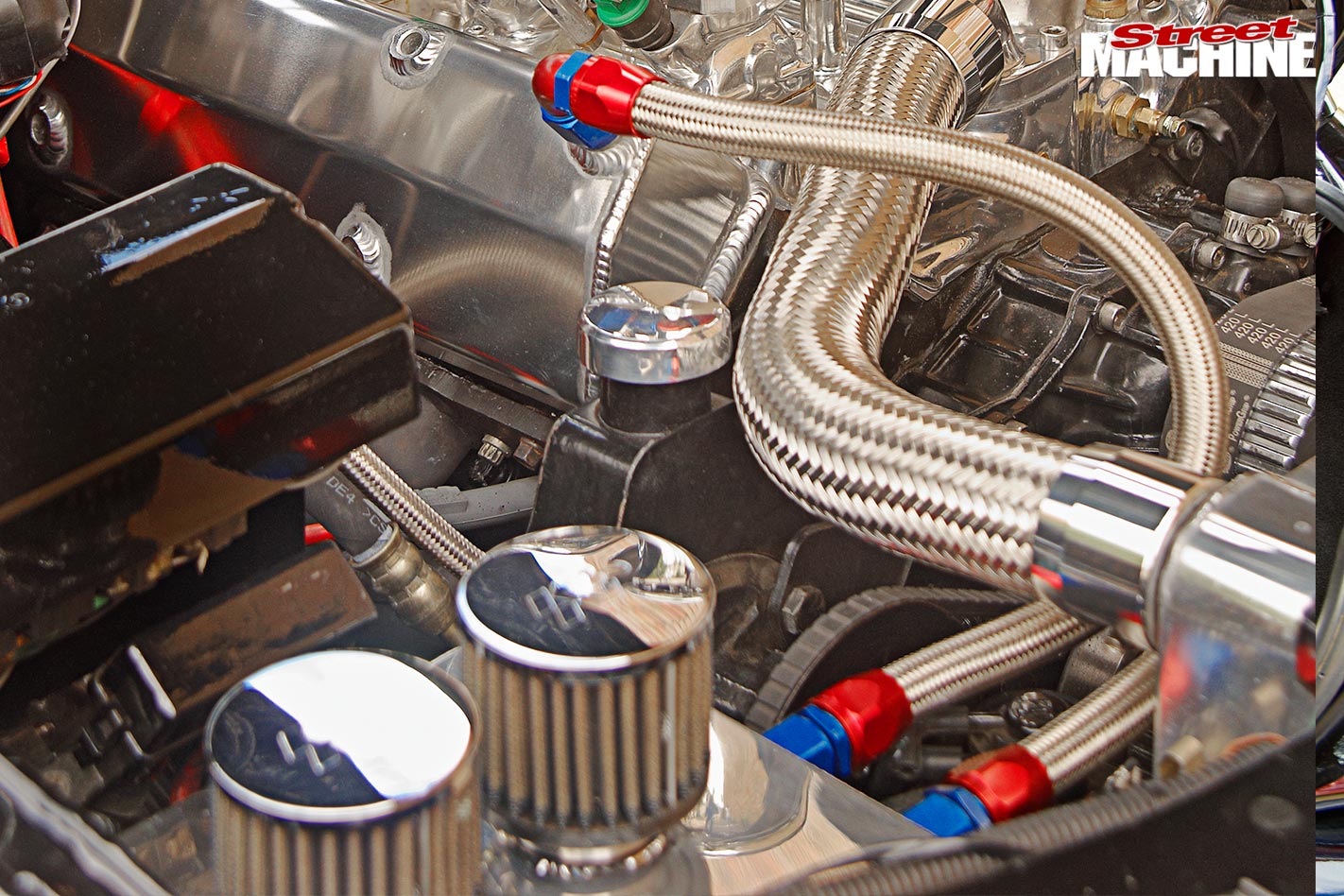 Picking the 370 up from the engine builder was a top moment for Michael. “It was like a Christmas present. It was all wrapped up like when you get a crate motor; I didn’t want to unwrap it! I just let it sit and stared at it.” But the fun was still to come: Adam from JEM had to wire up the 370, so Michael decided to tidy up the engine bay in the meantime. Then, after a month, the call came: it was ready to be turned over. All wired up, with fuel pressure, and after a dodgy fuse was corrected – a two-second fix – the 370 cranked twice, then fired its first angry shots. “It was like all my Christmases had come at once just hearing it! You don’t know what it’s actually going to sound like compared to when it was just a stock 308 – you just smile!” 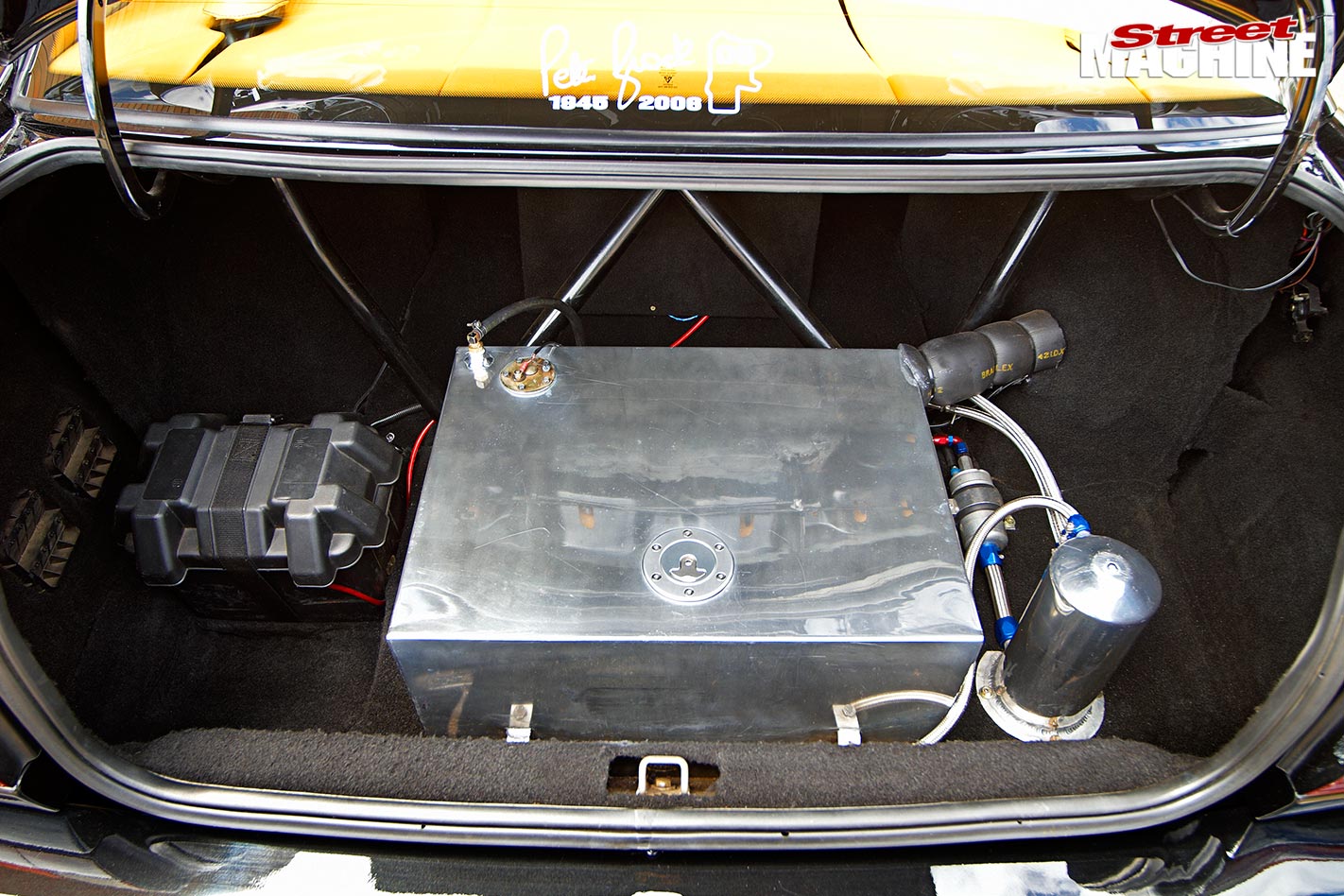 Running in the new-born V8 meant running at a constant 3000rpm – and it was this process that saw both elation and anxiety. “In that first 20 minutes I went from over the moon to panicky and nervous. It was running really hot – there were no fans on it – we ended up using a dyno fan.” But there was something worse: “There was water seeping out of the manifold. You can imagine my heart drop. It bought tears to my eyes”. And the moment was immortalized by one of Mick’s mates, who was on-hand with a video camera: “All you can hear is swearing. It was heartbreaking.” 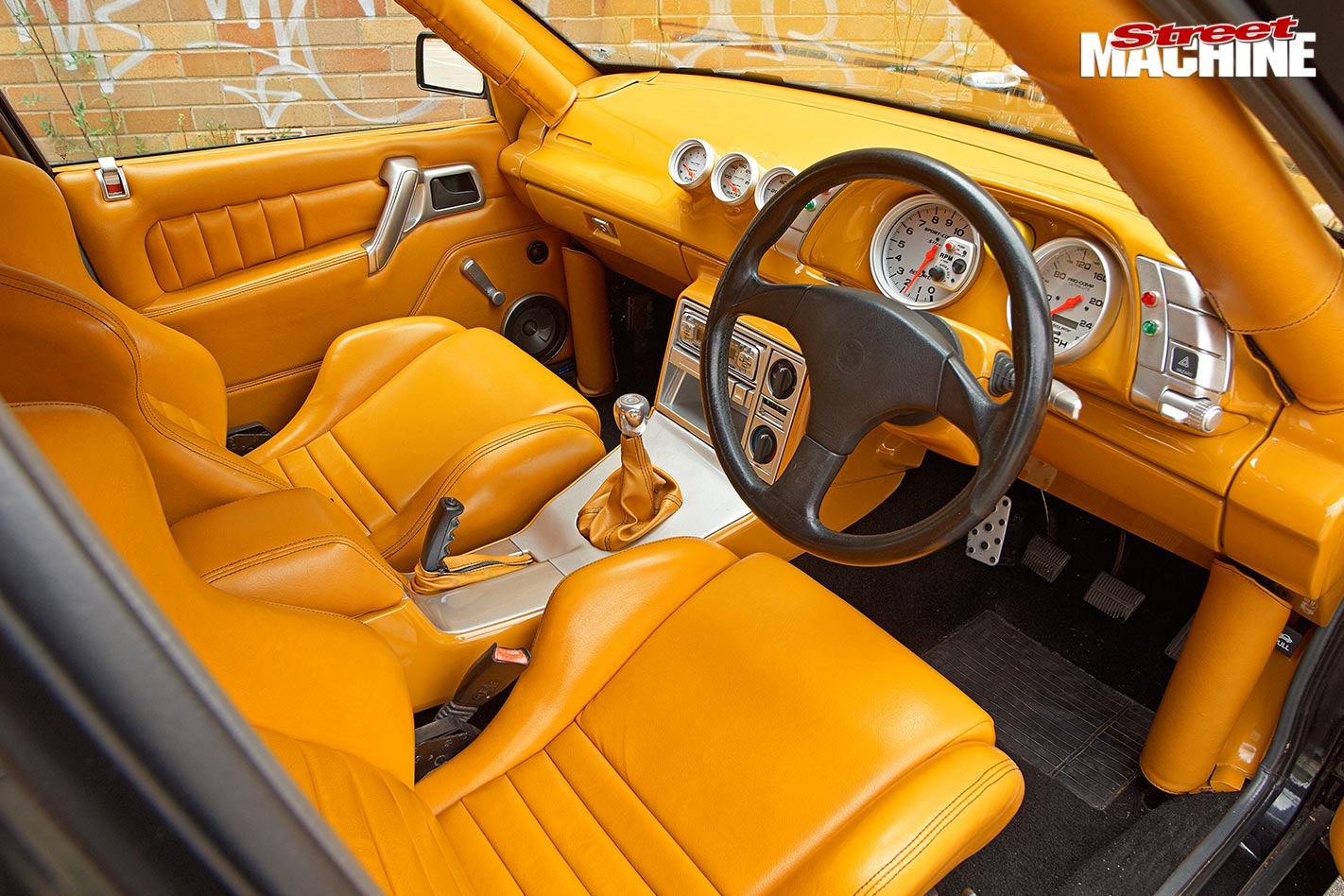 The manifold had to come off. It was re-welded, re-polished and pressure-checked, and there’ve been no hiccups since, “apart from polishing it – if you’re going to build something, don’t go for polished – it’s high maintenance!” Michael warns. The car, as you see it, is fully engineered. “We had to do so much to engineer it; we had to lift the rear, make it quieter, and the fuel cell in the boot had to be lifted 1.5 inches.” And those cuts in the bonnet? “Ahh – that’s John. He’s a freak and an absolute whiz,” Michael says with a grin on his face. “It was very slow and steady on a couple of milk crates out the back at home! It was a very nervous time, I’ll tell you that! It was my only bonnet, and he did it perfectly too.” 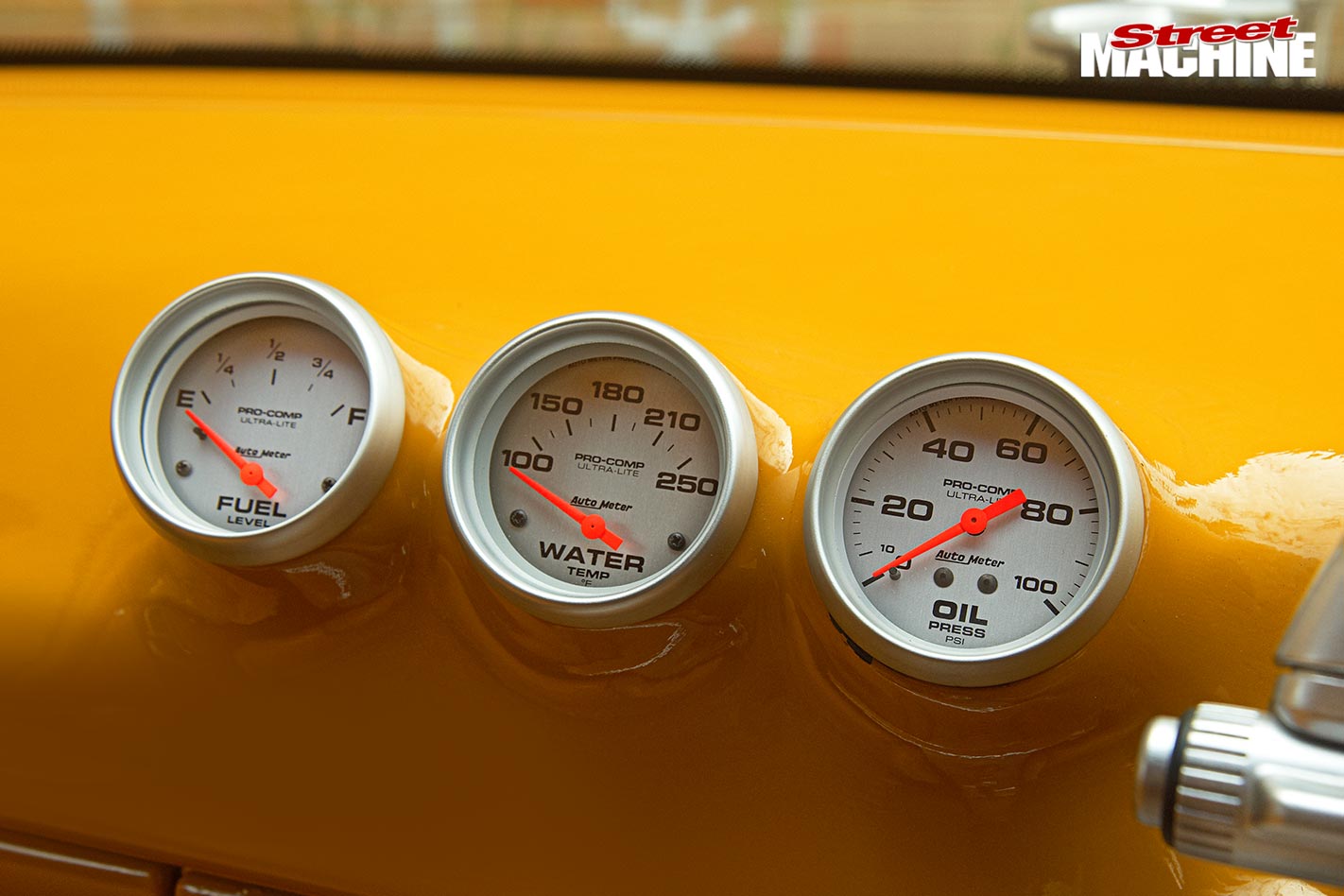 It’s the drive and the look that Michael’s stoked with. “You’ve got to put revs into it. It’s fun and scary. You put your foot down and you’ve got to fight it to keep it straight.” And so far, it’s run an impressive 11.6@122mph on the quarter. “I didn’t build it to race though,” Michael adds; “I just wanted a quick street car.” Along with the dash, it’s the major visual cues adding to the VN’s look – the injection trumps and the 22s – that he’s most proud of. “To sit behind it, it’s just angry. It’s good watching the engine shake at idle. I had the option to go turbo or supercharged, but nothing beats the sound of a high-comp V8.” 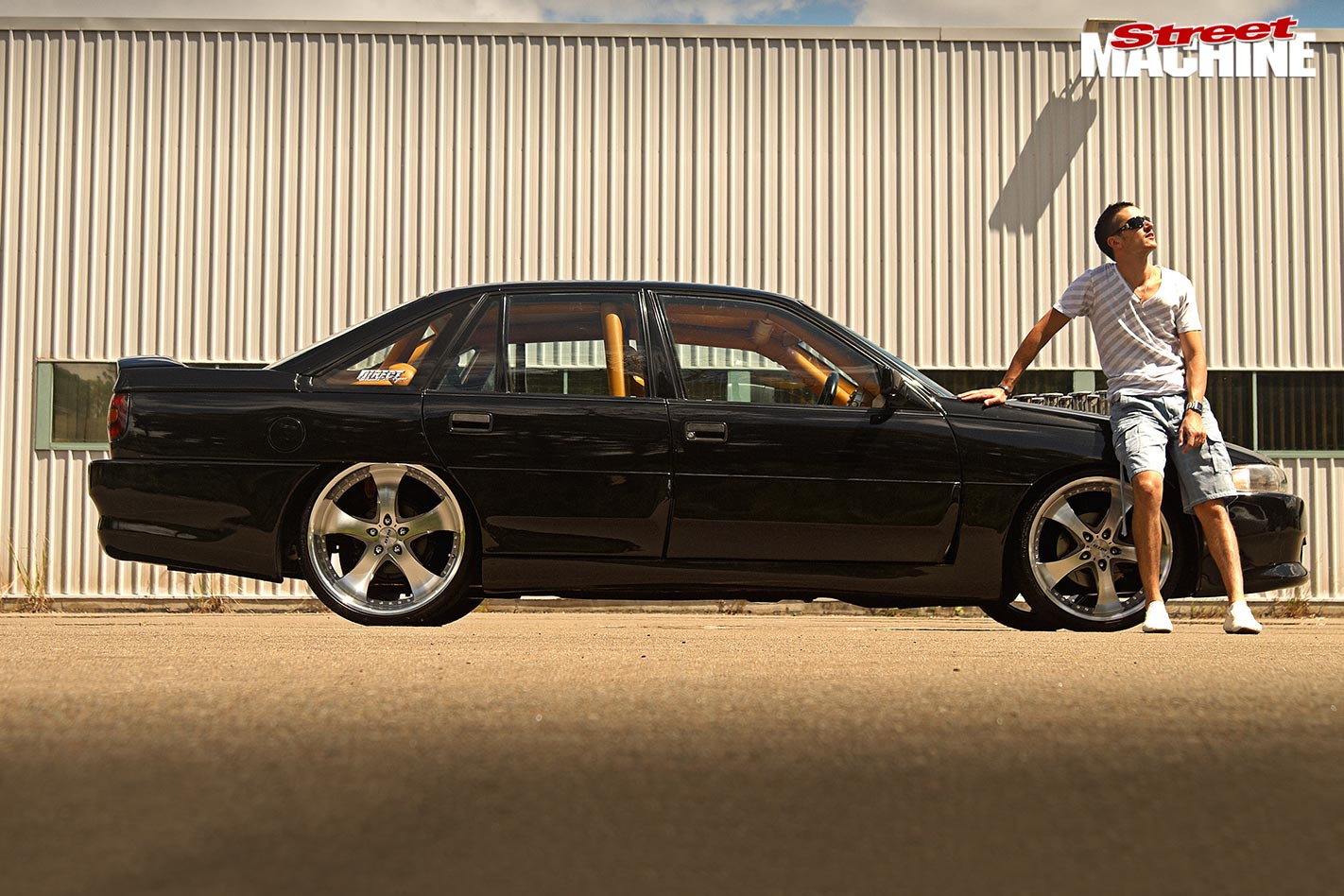 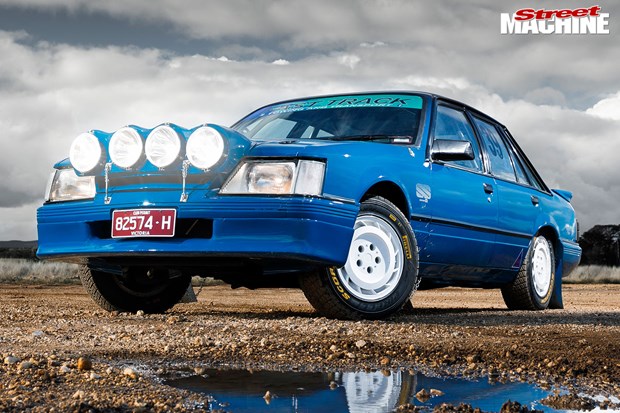 Getting down and dirty in a 5.0L-powered Blue Meanie replica rally car 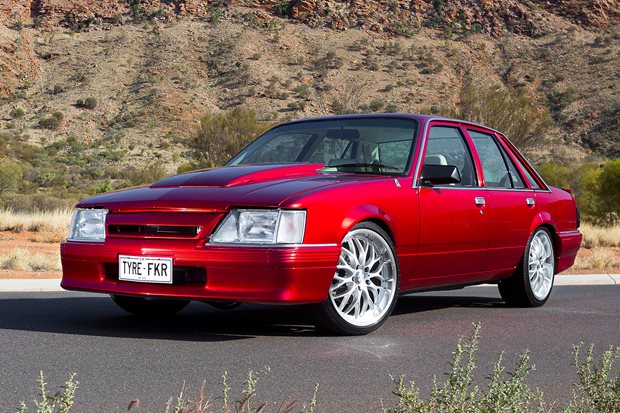