SHANE Mainprize’s project was fraught with wins and loses, elation and frustration, but happily he stuck with it to produce one very neat and tough Hilux. An enthusiastic sports trucker, he’s owned one or two in the past including a Holden V8-powered Hilux, not unlike this one. Shane’s plan was to build his wish-list truck, exactly the way he wanted it. 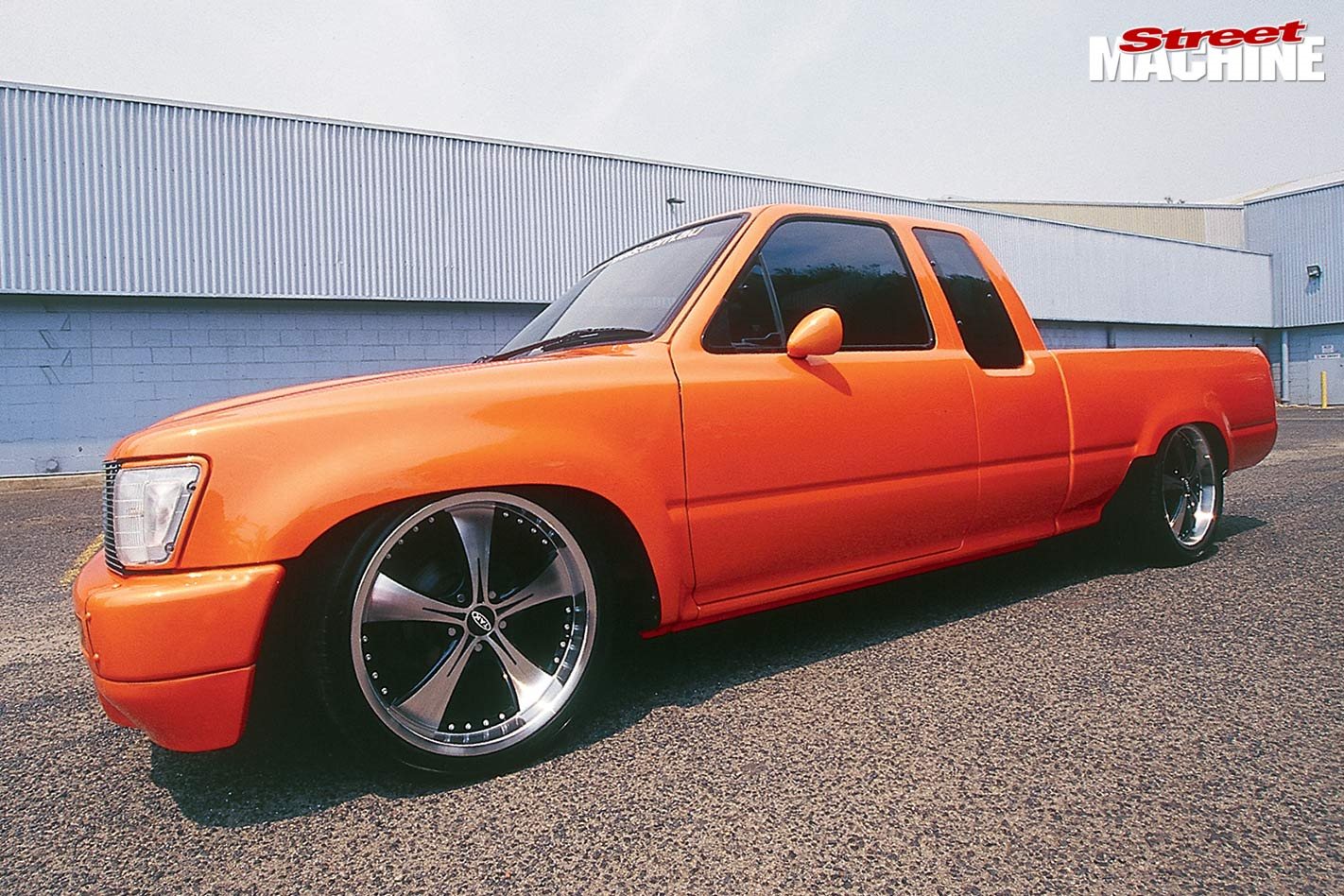 “I paid $2900 for this one,” he says. “It was an absolute pile of shit and had a squillion kays on it, but that didn’t worry me because I was replacing all the parts that wear out.”

All that remains of his purchase is the cab, dash, chassis and some suspension components. Everything else has been replaced, even the front guards which Shane replaced with four-wheel drive units.

“They have a bigger pump,” Shane explains. “The 4WD Hilux guards are a better match to the rear guard shape of the Extra-Cab tray.”

Then Shane stumbled upon an almost brand-new Hilux tray. 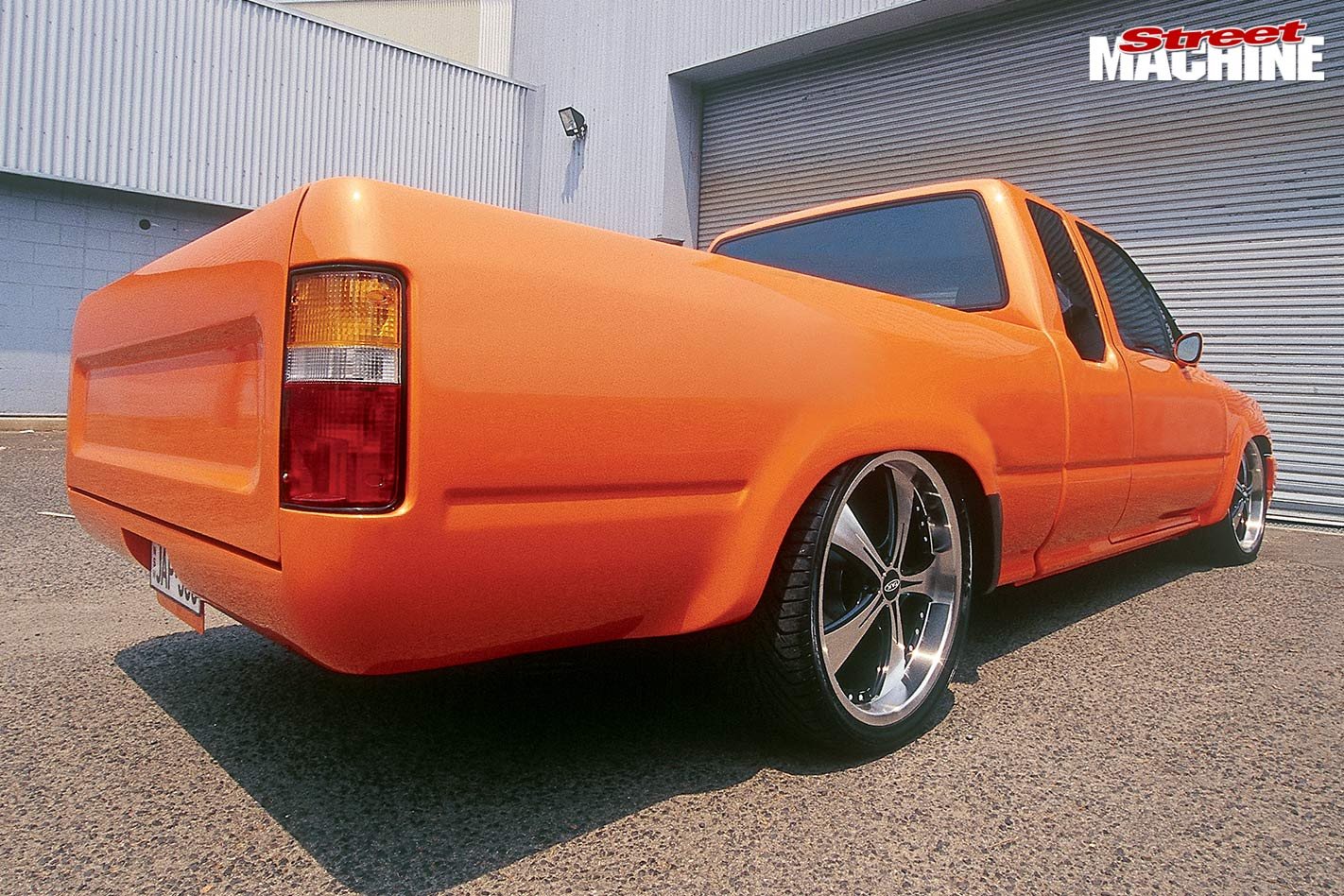 “I paid $300. I couldn’t believe it!” he says. He delivered it to a bloke to fit the tubs, giving him eight months to do the job, and when he went to pick it up, his luck suddenly changed.

“I nearly died!” he says. “This bloke had rolled the tray up on its sides, squashing the quarters. He’d gas-axed out the inners; heating up and warping them. I was shocked that someone who should have half a clue could be so stupid.”

Easy Street Customs at Hornsby in Sydney’s north was the team that fixed the tubs and modified the rear chassis rails to provide more clearance over the rear axle.

“It’s what’s called a four-inch baby notch,” explains Shane. “They also added the section in the tray to make it fit.” 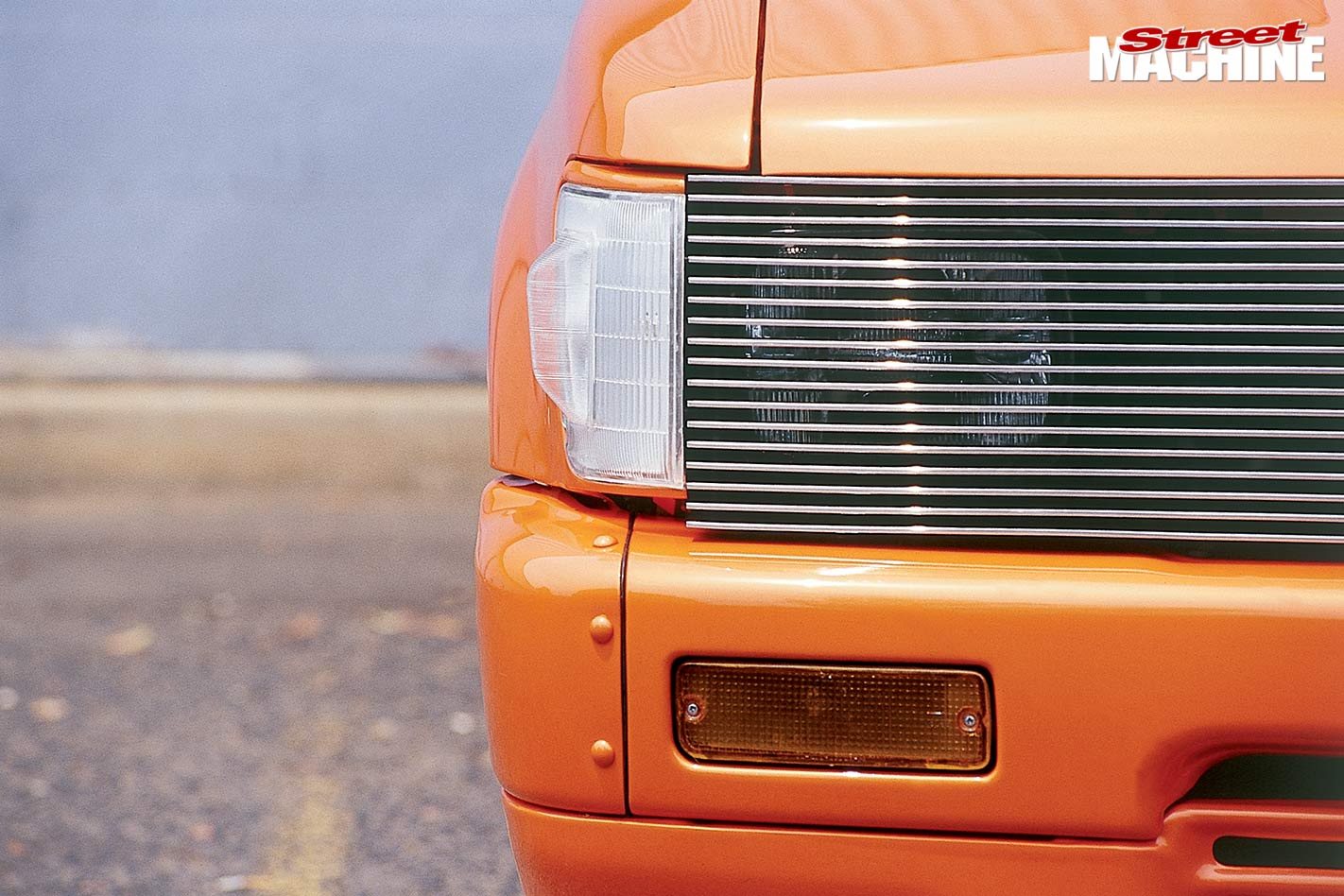 After his last Hilux V8, Shane was keen for the extra grunt of a 5.7-litre stroker. As luck would have it, he found one of the last VT HSV roller-cam engines in the Trading Post, but the factory six-speed manual had already been sold.

“I thought I’d get a TH700 four-speeder from a VN or VP Commodore, as it can be run with the VT manual computer,” Shane says. “But something of that age would need reconditioning. I stumbled on a TH400 three-speeder that had been reconditioned, and figured I wouldn’t really need the extra cog.”

With the money handed over, Shane had another dip in the luck stakes when he discovered it had indeed been reconditioned – about 10 years previous. So he had to recondition that, too. 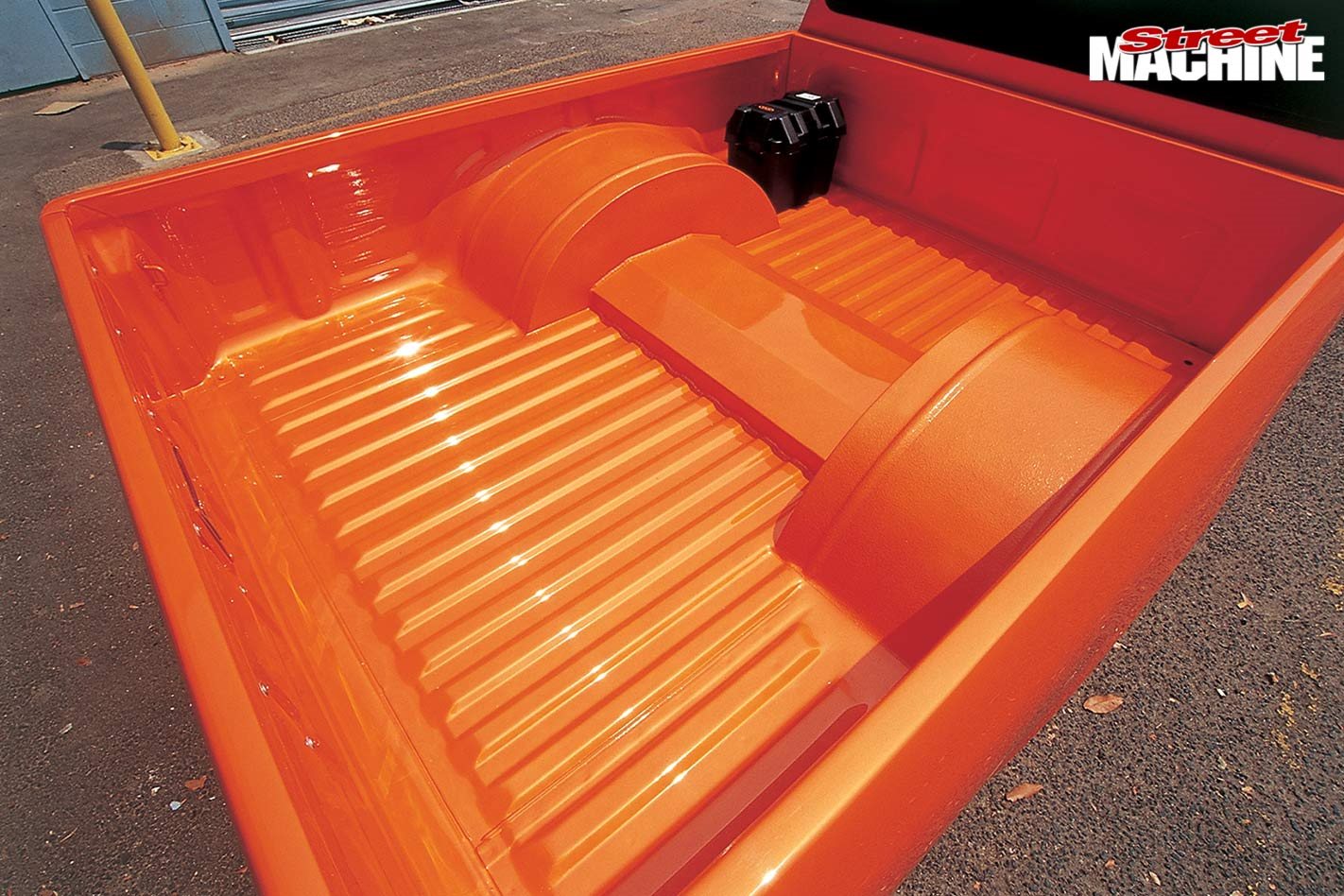 Other modifications include drop front spindles on cranked-down front torsion bars (most Japanese trucks use torsion bars instead of coils) and a VT Commodore radiator with twin thermo fans. The rear uses a nine-inch with Hilux axles, the rear pan rolled and a custom rear numberplate box added by Caldwell Smash. There’s no aerial hole, doorhandles, tailgate handle or petrol flap. That ‘phantom’ billet grille was imported from the US.

He couldn’t be bothered spending the money on clear light lenses, which are de rigueur for sports truckers, and said he’d rather spend his money on a V8 rather than airbags.

“You see a lot of $3000 trucks getting around with eight grand’s worth of bags, and a stock, crappy four-cylinder in them,” he says. 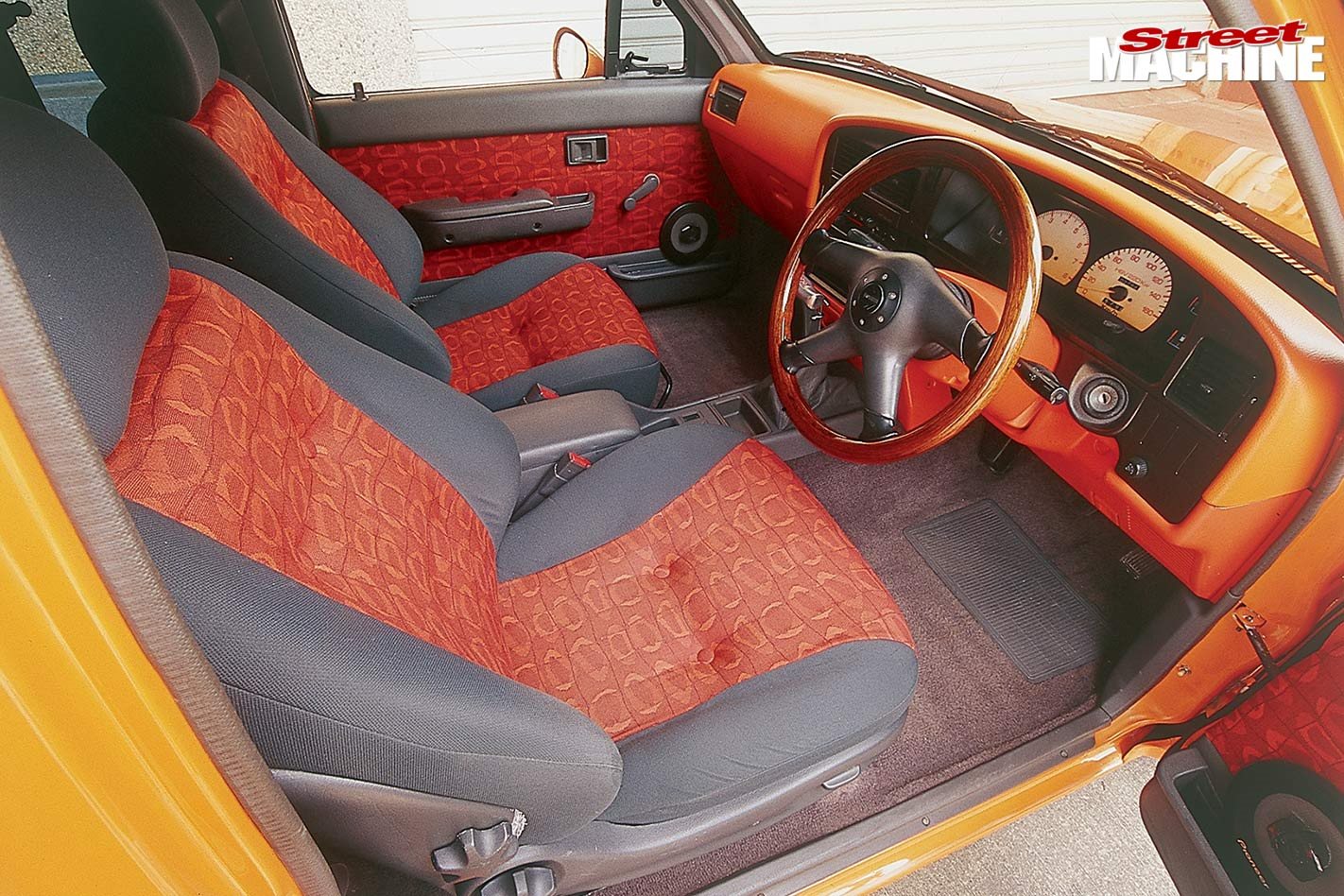 Shane wanted to be the first with a two-tone orange over blue combo he spotted in a US truck magazine, but when he saw a photo in a later edition of the same combo on an Aussie truck, he dropped the blue and stayed with the House of Kolor Tangelo. The paint was applied by older brother Troy at The Repair Wizards in Katoomba after Shane did the panel edges and engine components.

Signwriter Shane used a vinyl banner paint mix for the dash and cut fresh speedo and tacho faces by scanning the originals and pumping it through a computer-driven vinyl cutter. The seats are VT Commodore.

The distributors of TAK wheels offered him a set of 19x8 TAK Legends (running 335 and 365 Ventus tyres) when they saw Shane’s truck and its crowd-pulling colour. They finish the truck off supremely.

As the luck stakes tally up, good triumphed over rip-off merchants and shonky workmanship and resulting in one Tonka-tough truck. 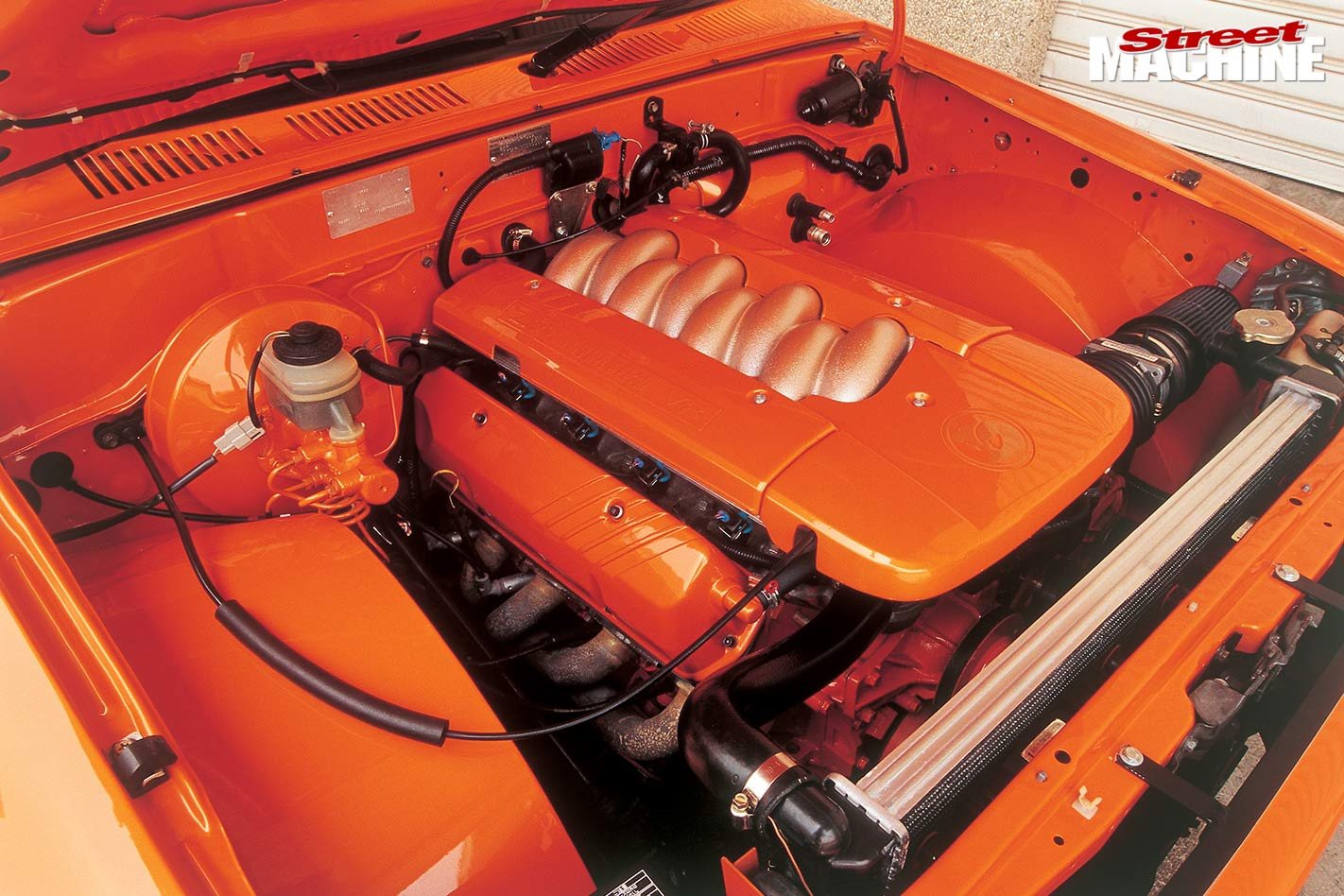 Squeezing the beaut Aussie bent eight into the Japanese engine bay is a pretty simple process, according to Shane. First item needed is easy, an HQ Holden V8 sump, as the shape better fits the Hilux crossmember. The second items, new engine mounts, were sourced from Mark’s 4WD Adapters, while the factory gearbox mount needed mild modifications to suit the three-speed auto.

Lastly, the floor pan required a few belts of the hammer to allow the gearbox to fit in. Then it’s just a matter of getting everything to bolt up. You’ll need specially-made extractors, and to fit a bigger radiator and find hoses to suit. Then track down a cluey auto electrician to wire up the Holden computer and make the gauges work. You could use Commodore items, but there are also a number of companies who can supply custom speedo cables to suit the OE gauges. Try Gauge Works in Melbourne (03 5277 9296).