The Holden VN SS is a cult classic, and Brad Phillips's example is the best of the breed

IT SEEMS odd to refer to a car with plastic bumpers as a classic, but that’s exactly what the VN Commodore SS has become. Just like the VL Calais before it, the VN SS has come of age and emerged as a cult favourite. Good examples are increasingly difficult to come across and values are heading steadily north; some will even be eligible for historic rego next year! 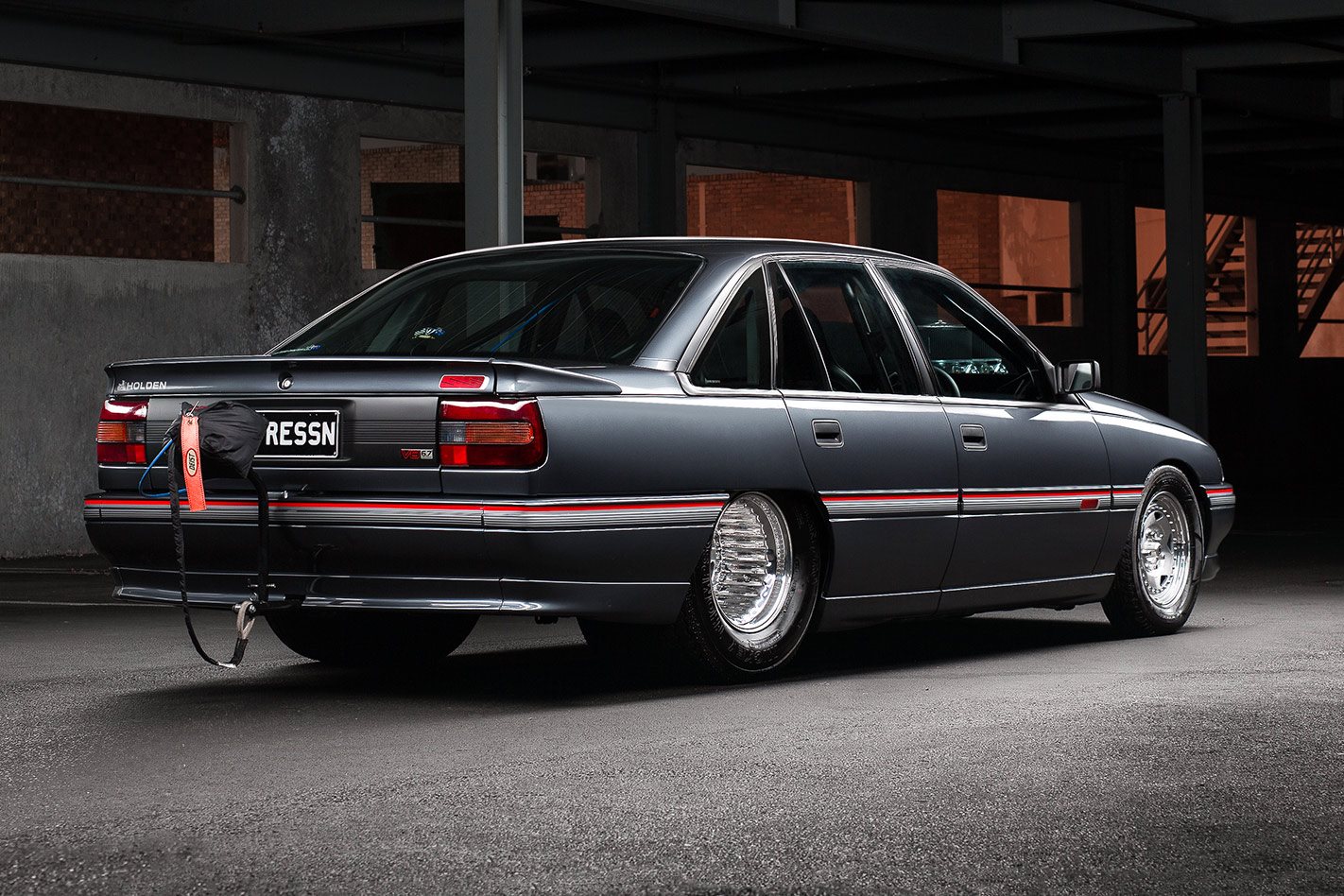 For all the obvious modifications, the car still retains its original flavour. Body mods include a shaved fuel filler and aerial, smoothed bars, exhaust cut-out deletion, and provisions for the Deist parachute

Brad Phillips bought this one when he’d just turned 17, and it’s fair to say it bore the brunt of his destructive P-plate years. “Two weeks after I bought the car it was defected and I’d lost my licence,” he says. “In those two weeks I had a cop tell me – and people at my school tell my sister – that I’d end up dead in the car. Glad I’ve proven that wrong!” 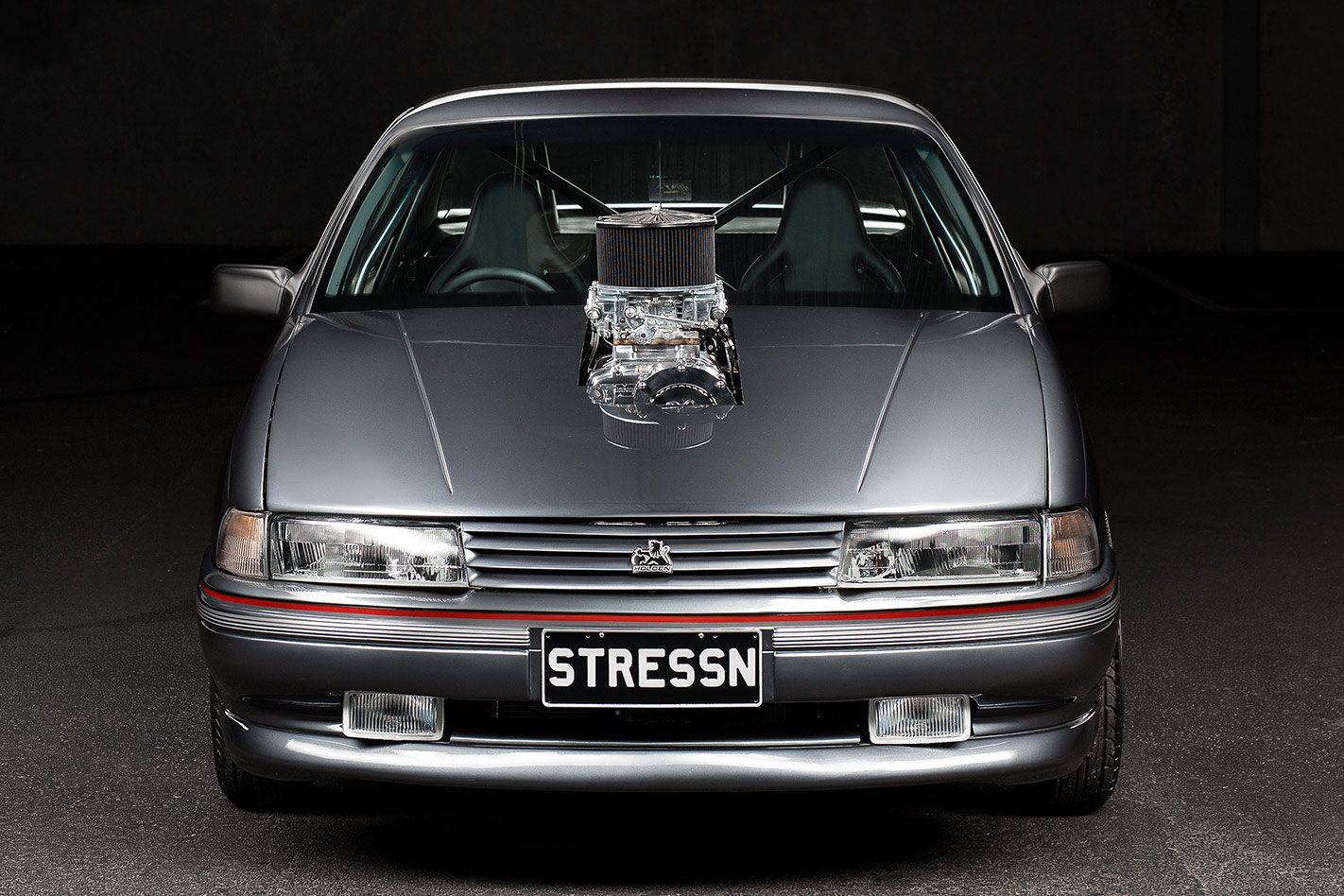 For the following three years the VN was used as a weekend toy, and the defects and driveline breakages came thick and fast. Brad skidded the car and raced it too, with a bit of spray yielding a commendable 13.1-second quarter-mile pass. At the age of 20, he endured another state-mandated hiatus from driving, and decided to pull the car off the road for a thorough seeing-to. 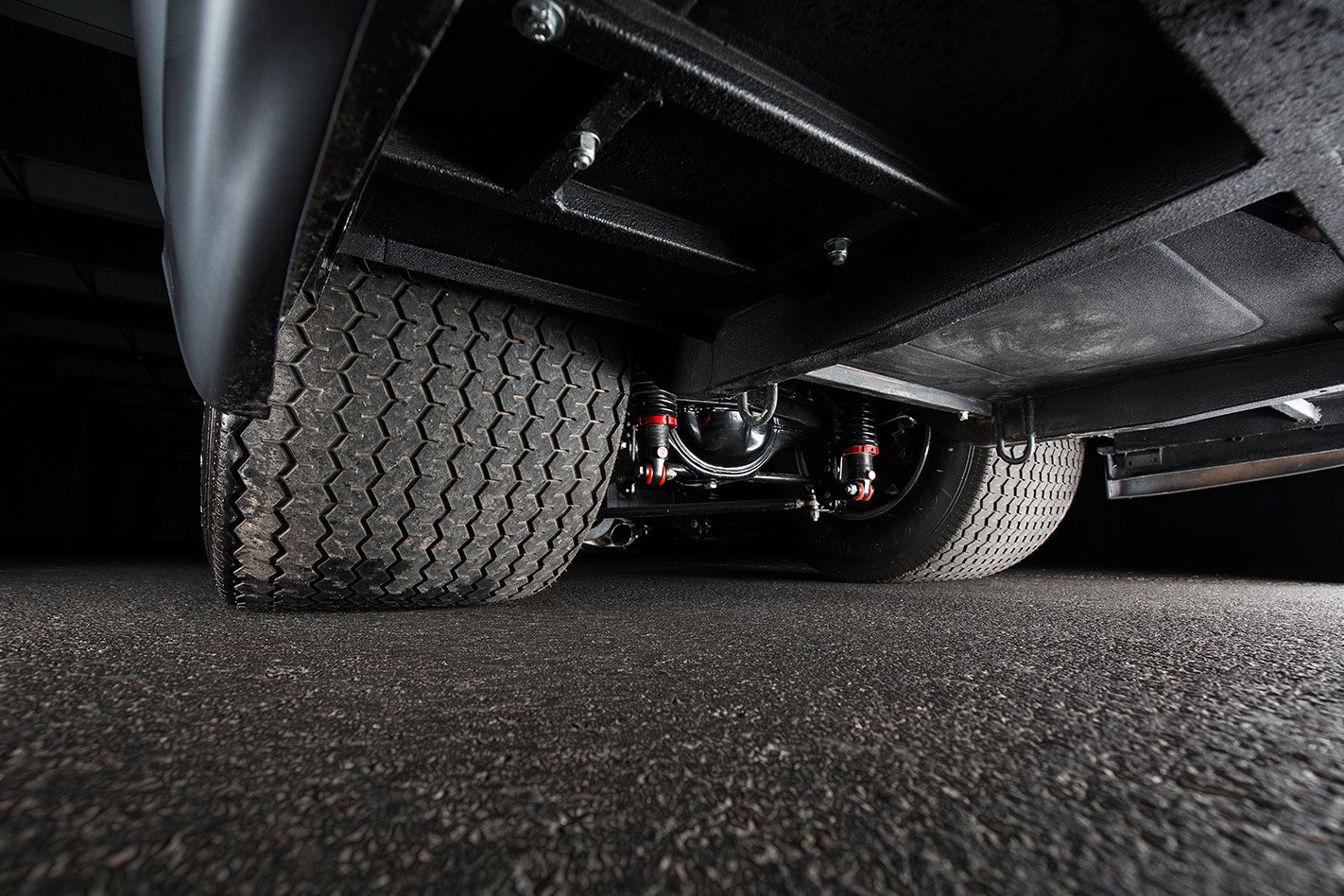 “I booked it in with Frank at Zagari Engineering here in Adelaide for mini-tubs and a nine-inch,” Brad says. “That went out the window one Friday arvo when I rang Frank to tell him that if I was going to tub it I should put a four-link in it, and that if I was going to do that I should put a ’cage in it. Frank was keen on that idea, so it all changed to a three-quarter chassis, massive tyres and a ’cage; I guess that was the point at which it spiralled out of control.” 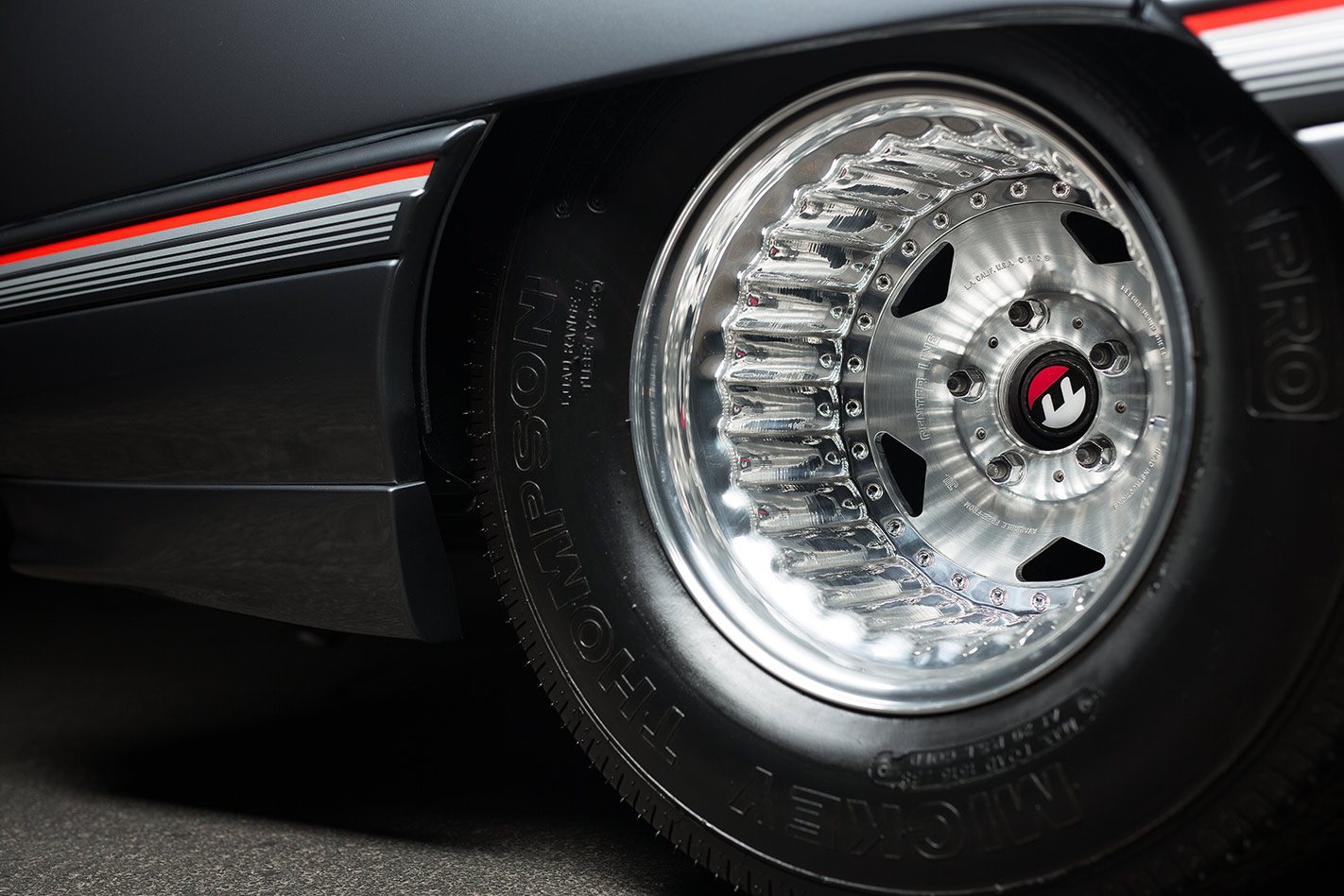 With the chassis work and nine-inch rear end completed, Brad dragged the car back to his family vineyard, where it sat in storage. He shouted himself a 6/71 blower for his 21st birthday, but the build lost momentum and progress stalled. 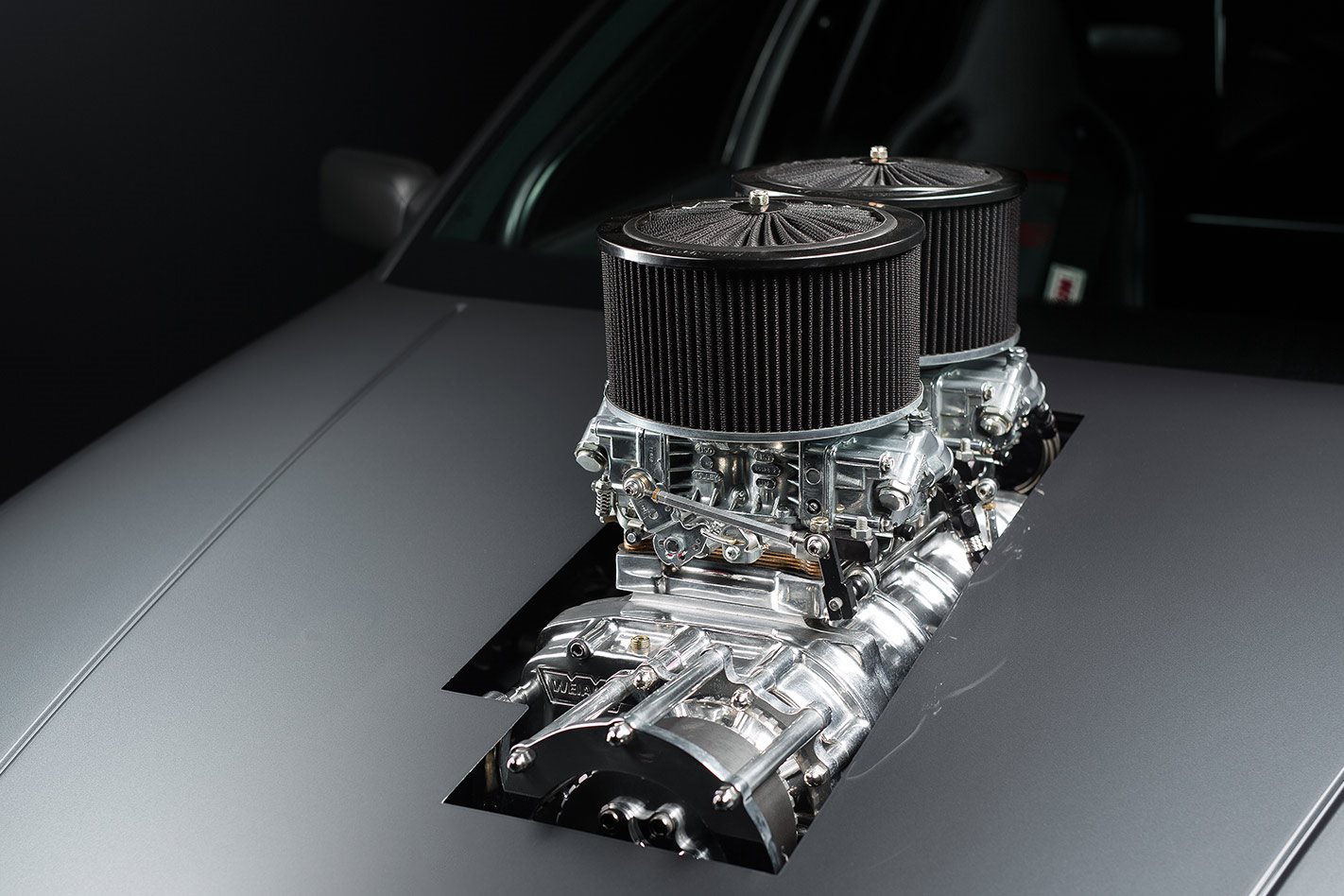 Some years later he blew the dust off the car and started to think about an engine. “By then I’d met my now-wife, Darls. We started to talk about having kids, so I thought I’d better get the car done before that,” Brad says. “I had a fair few of the major bits for the motor ready to go, so I took them down to Rino at RC Engines. Rino and the guys put it together, and it made 876hp@7000rpm on the engine dyno, which was more than I was hoping for at the time, so I was stoked.” 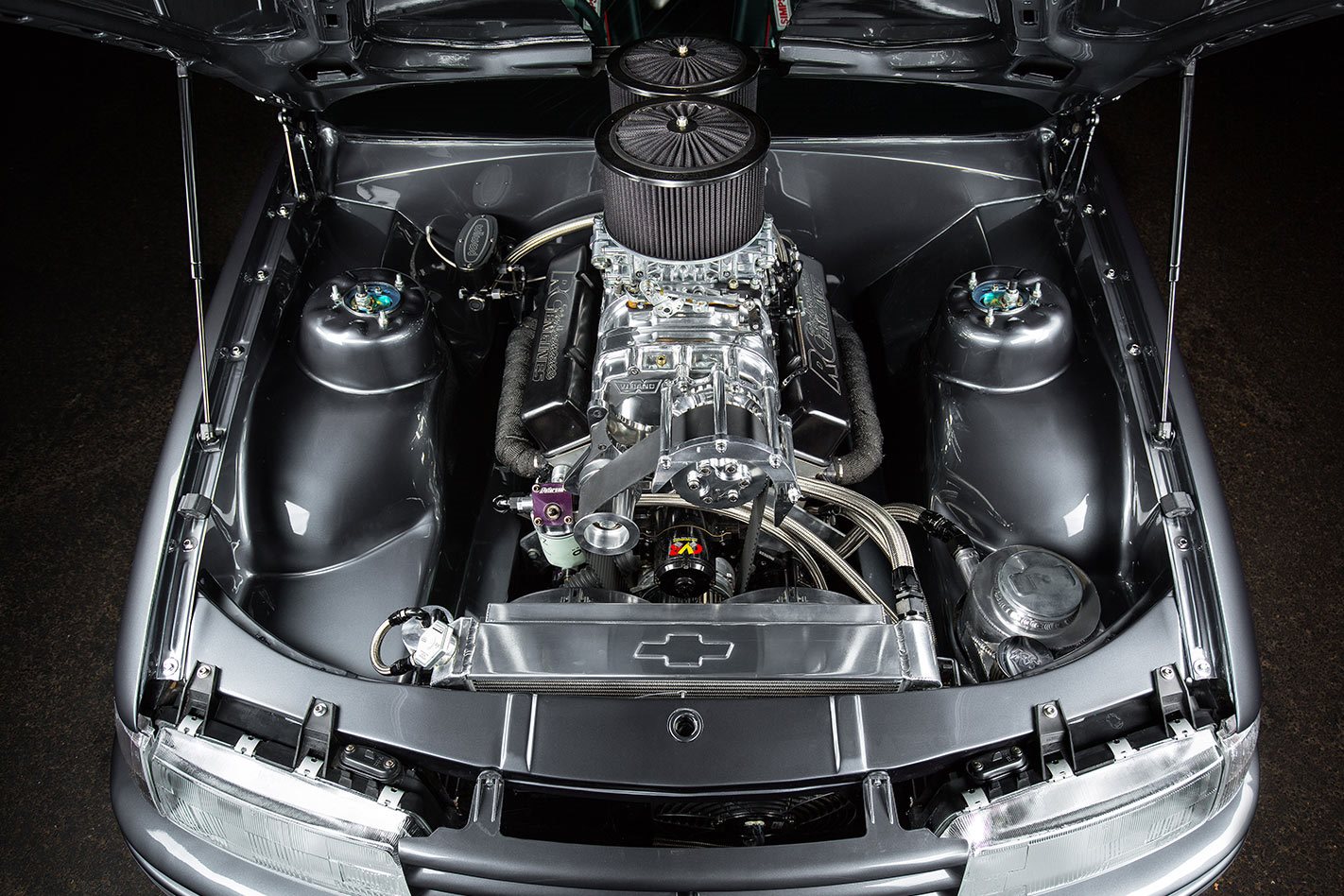 Aside from the 876hp, 6/71-blown small-block that dominates the landscape, there’s plenty to talk about in the engine bay. There’s a recessed flat firewall, smoothed radiator support and inner guards, and lots and lots of shiny stuff. “The body, including the engine bay, was mostly metal-finished,” Brad says. “There was only a small amount of bog used”

The motor is a fairly staunch small-block Chev, weighing in at 412ci with a Callies crank, Crower rods and Diamond flat-tops. The heads are Pro-Filer items and the cam is a Comp solid-roller. Topped by twin Holley HP 950 carbs, the Weiand 6/71 blower winds 12psi of boost into the engine to achieve what is quite a respectable number, on E85 fuel. Brad is confident that there’s more in it, too. 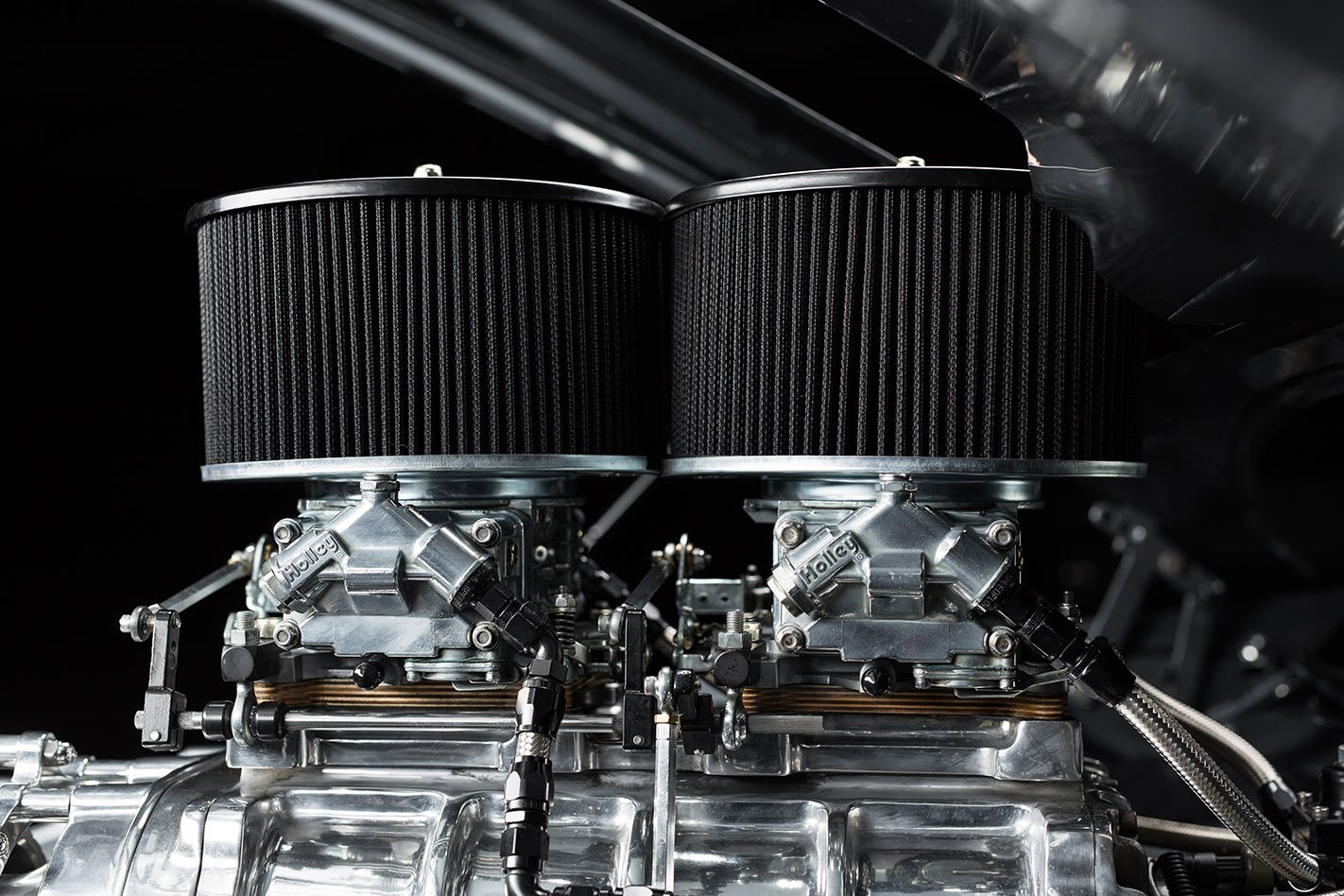 Meanwhile, the car headed back to Frank at Zagari for an engine plate, flat firewall, shaved battery tray, parachute mount, and that killer sheet-metal dash, which is a real highlight of the car. From there, Brad and his good mates Carpet and Daniel from DV Paint & Panel hooked into the bodywork and trial fit-up of the car prior to paint, in amongst the birth of Brad’s first child. The car also spent some time at SA WeldWorx having the headers and exhaust seen to. 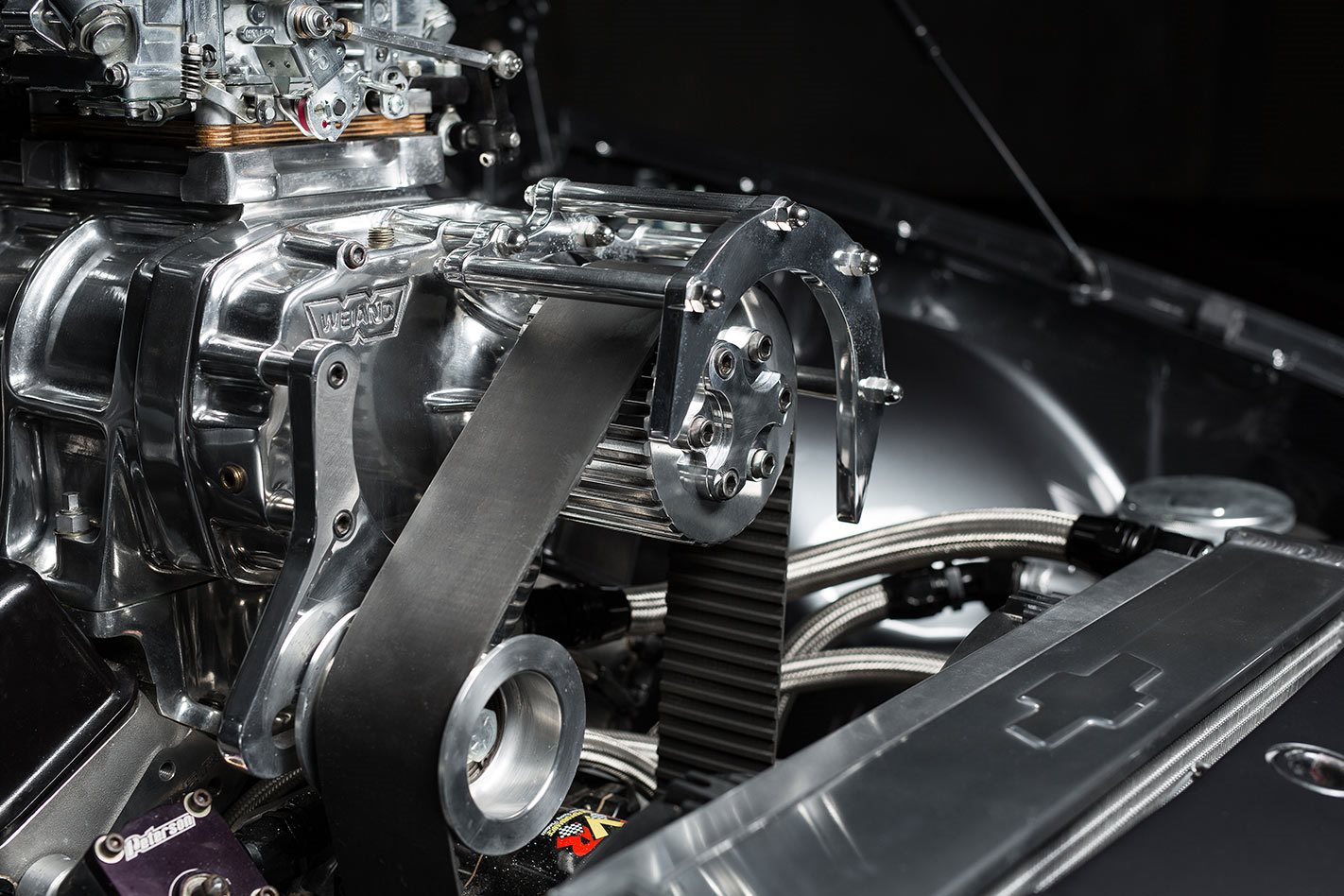 Brad’s wedding saw the car put on the backburner once more, before progress recommenced in earnest at Carpet’s workshop, with lots of late nights lavished on it.

“Plenty of people said the car wouldn’t get done, but I was determined it would be at Summernats 30,” Brad says. “My mate Benny offered to give us a hand with the panelwork; I don’t think he expected he’d be doing as much as he did! He joined Carpet and me on the car. It was stone-guarded underneath at this stage, plus I had the nine-inch and four-link bars powdercoated, so we chucked these in. Eventually the car went to Benny’s house so he could focus on the panelwork, and he spent lots of time smoothing the firewall and engine bay, and metal-filing the rear quarters and roof.” 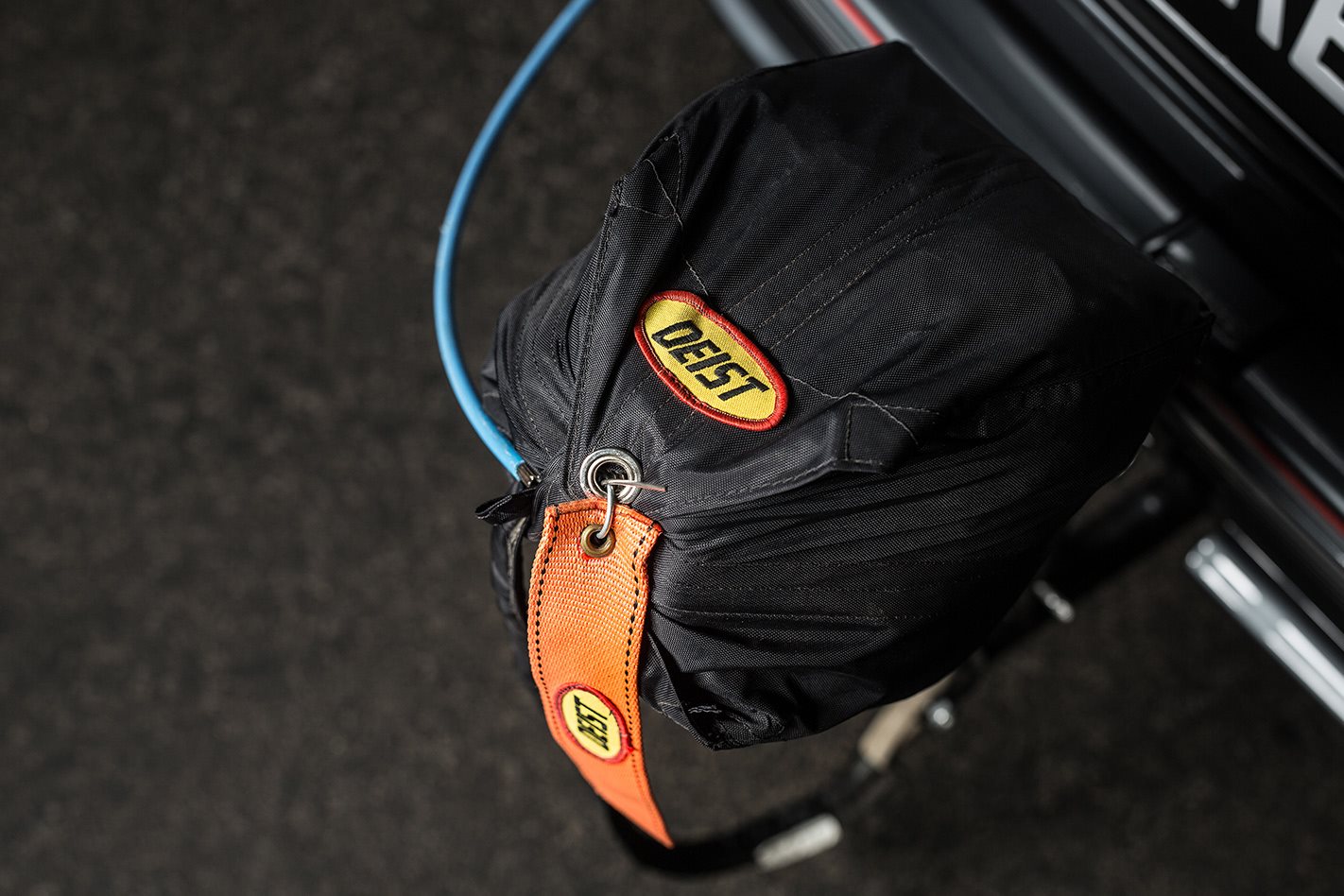 Just three months out from Summernats the car was only a shell in primer with a painted engine bay, and the build began to consume Brad’s life. The engine and Turbo 400 trans went in, while the wiring and plumbing were painstakingly carried out with help from Brad’s mate Cachia. Then came the defining moment in any build: “That first push of the starter and it fired; I was stoked, and beers were had to celebrate.” 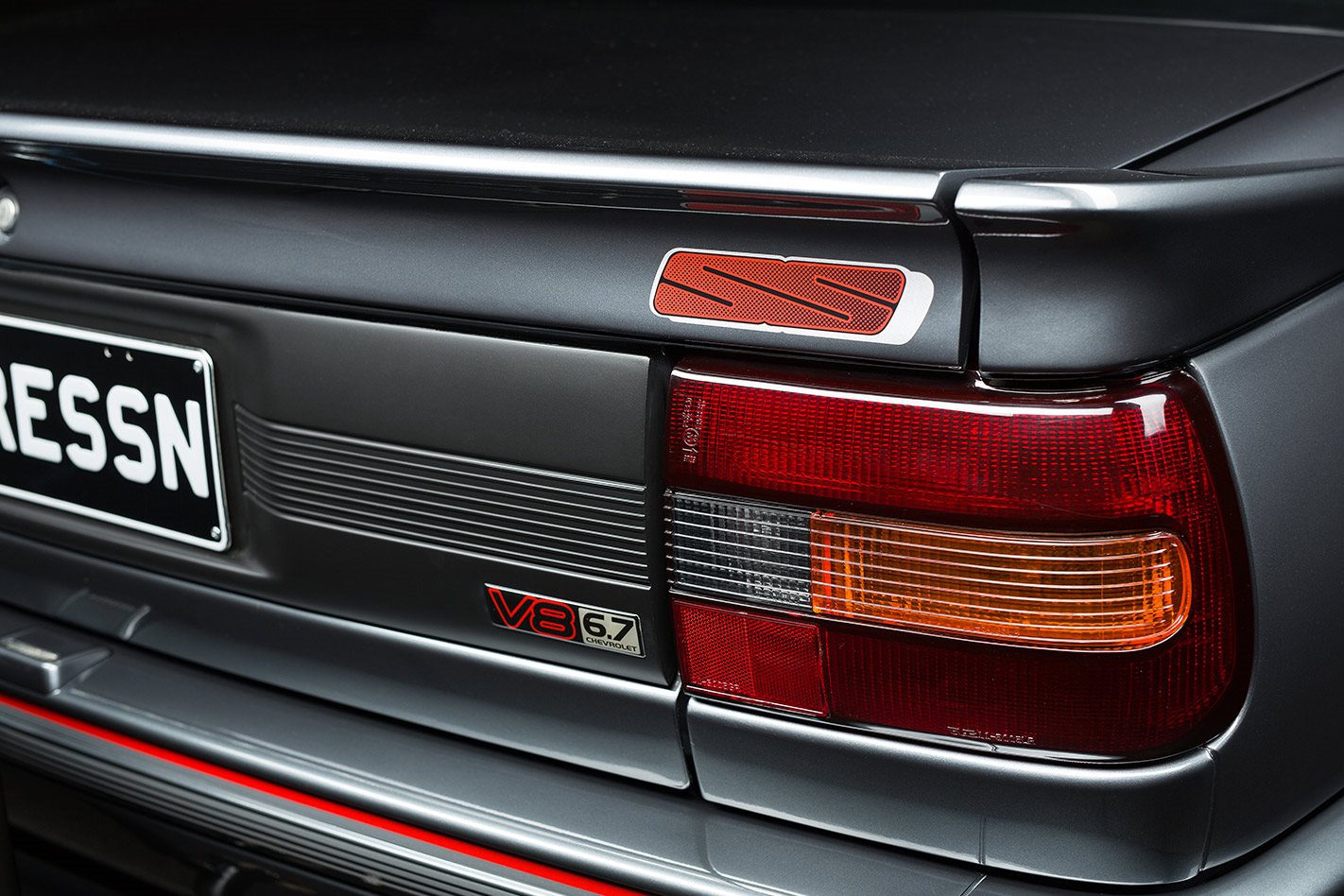 The standard SS stripes and decals are accented by a custom badge to reflect the new engine’s identity – ‘6.7 Chevrolet’ instead of ‘5.0 Injection’

Daniel and David at DV Paint & Panel laid on the Atlas Grey paint, and they did a sensational job of it. The SS pinstriping and livery were placed on over the top, and in a stroke of genius were also carried over to the cabin. 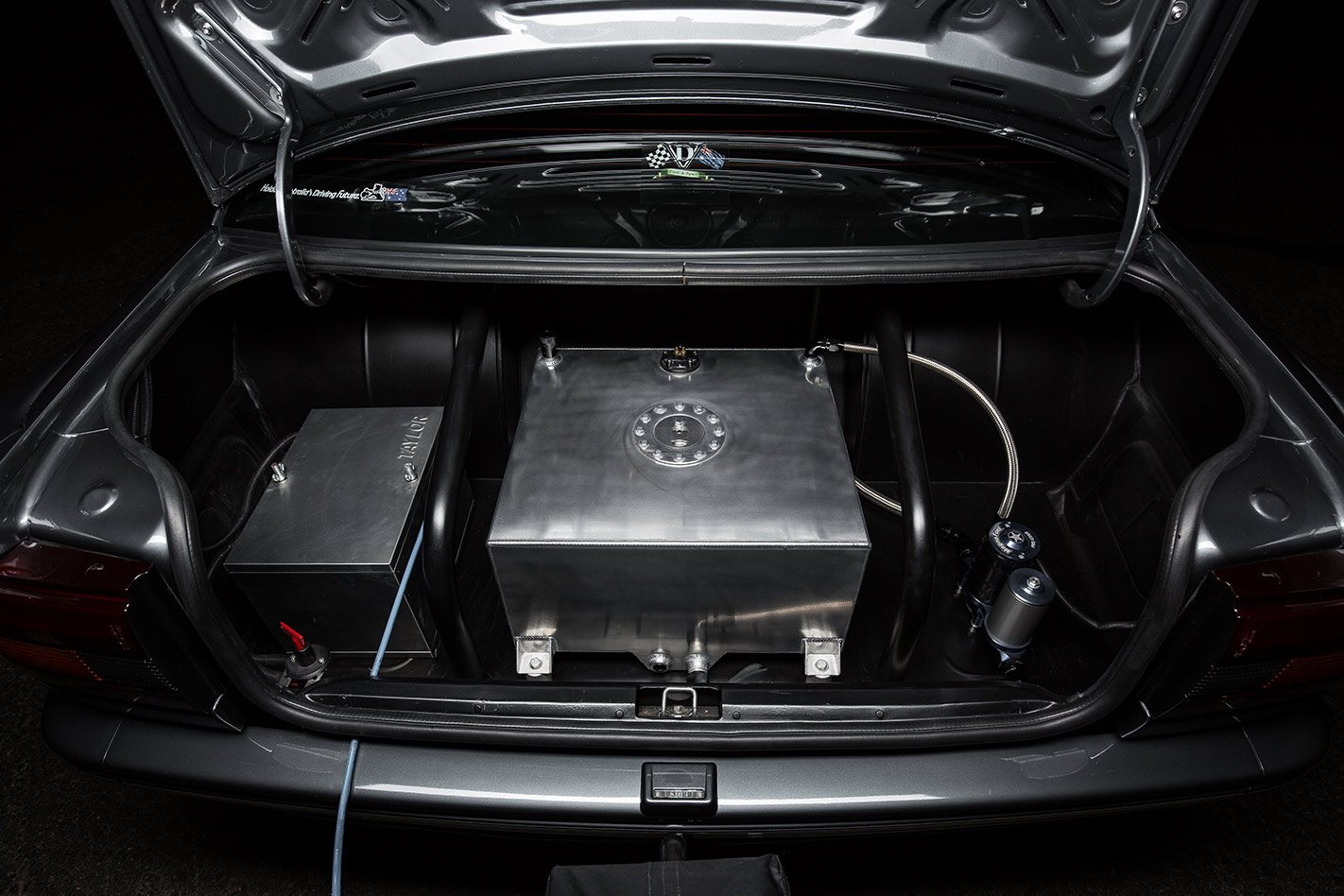 The luggage compartment houses a 60-litre RCI fuel cell, Taylor alloy battery box, MagnaFuel 500 fuel pump and isolator. The tank might look big, but it’s arguably not big enough – Brad ran the car out of fuel at Summernats on more than one occasion!

The car’s maiden drive took place with no windows, the rear doors zip-tied shut, no bonnet or boot, and no wheel alignment. “I pulled out of Carpet’s workshop and onto the street and couldn’t resist the chance,” Brad says. “I straightened the car up, flicked the line locker on and lit up the rear tyres with ease. All the hard work was finally starting to pay off.” 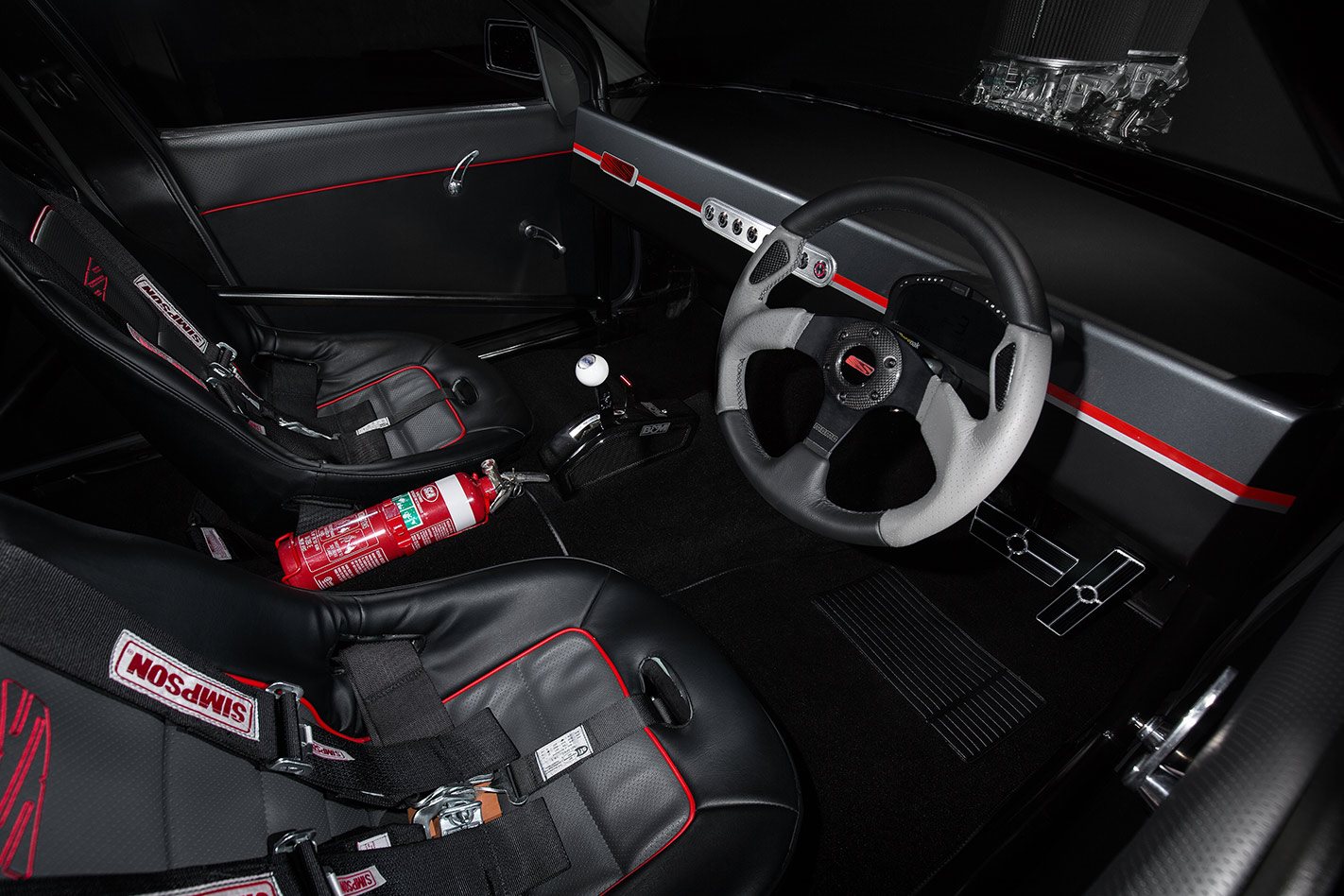 The VN’s cabin looks an absolute treat with the iconic red and black SS livery carried in from the exterior. The sheet-metal dash was built by Zagari Engineering, with the SS stripe and insignia, billet switch panel, Racepak dash and Momo wheel really setting it off. The top half of the dash was painted Atlas Grey and the bottom half satin black, with the standard red and grey strip to break the two up

The Summernats thrash continued and the car was delivered to Adam at AJ Trim on the Monday before Christmas. By Friday afternoon, the interior was done. “As soon as I saw the seats I was pumped; they looked every bit as good as I hoped they would,” Brad says. That left little more than fit-and-fiddle work to do before the car’s Summernats 30 debut. 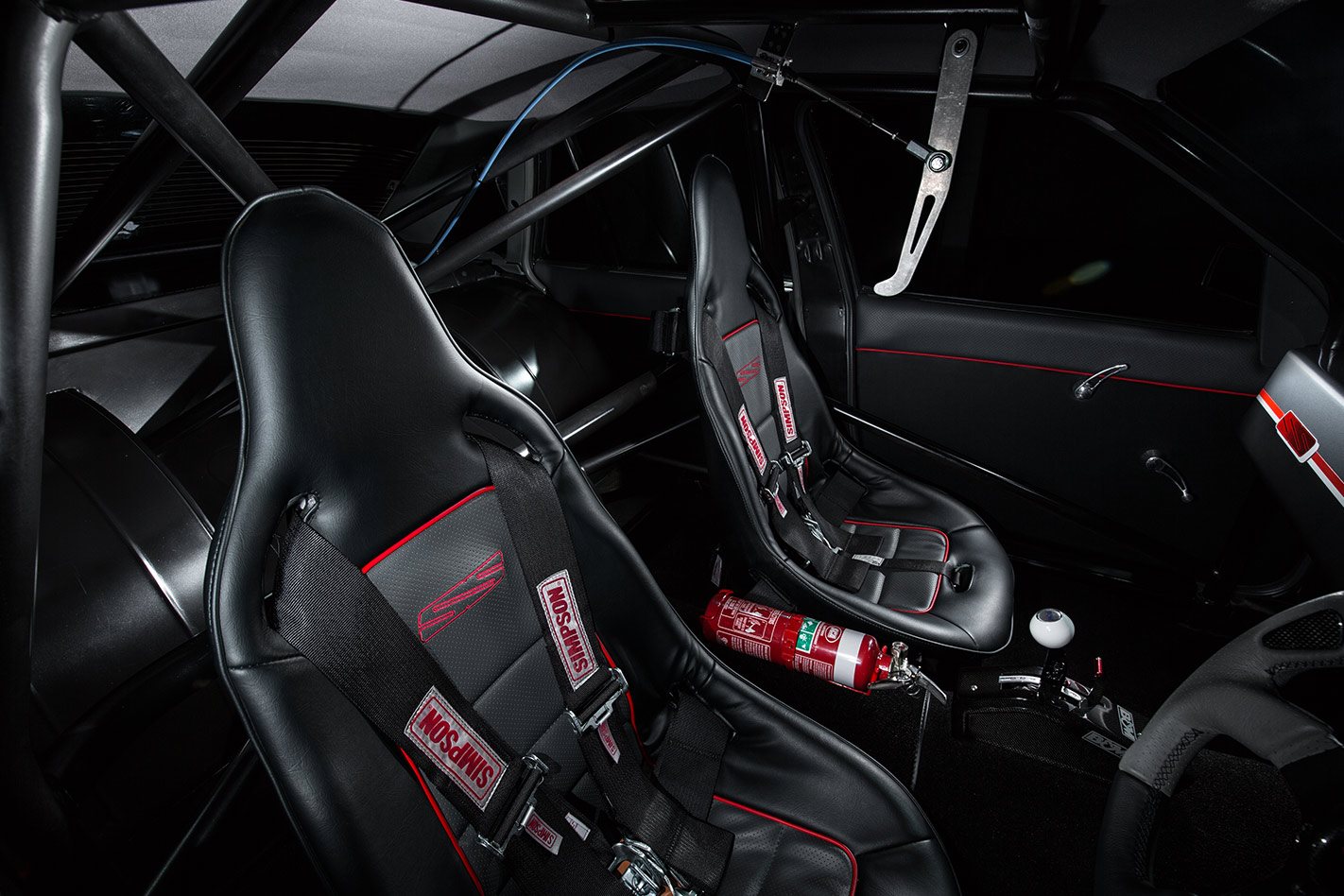 Custom door trims and RCI buckets were trimmed to match in grey and black with red piping, while there’s a hulking great big set of tubs where the back seat used to be. “The idea with this was to bring the outside of the car to the inside,” Brad says

“I went to the ’Nats hoping that Street Machine would want to feature the car, and that I’d pick up a trophy and make the Supercruise. I left ticking all those boxes and then some, so I was stoked,” Brad says. 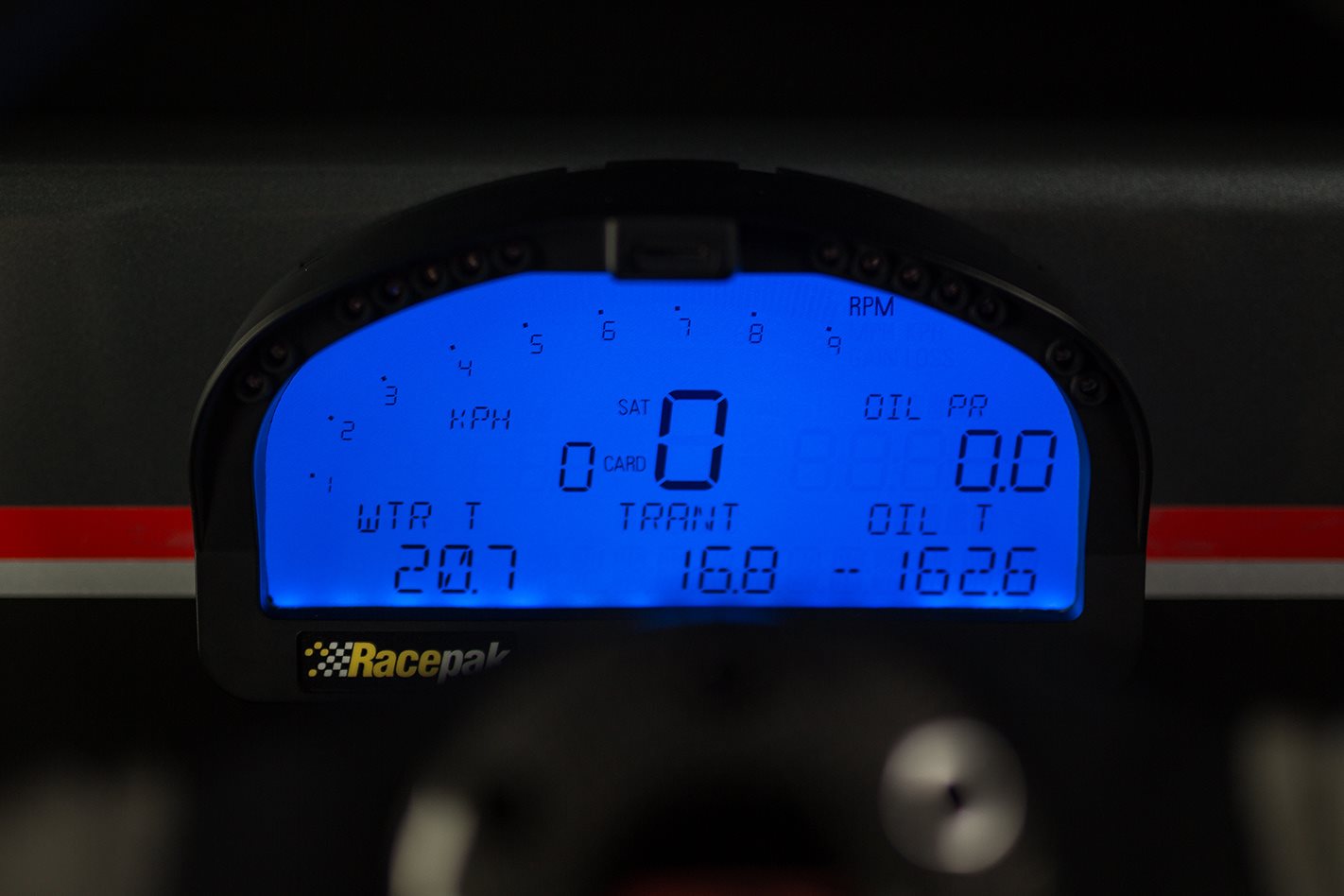 Second place in Pro Tuff and second place Overall in Tuff Street were testament to Brad’s hard work, and getting an invite to the PPG Supreme Entrant show on the Sunday morning was the icing on the cake. Not everything at Summernats went according to plan, but the feedback on the car was overwhelmingly positive and Brad had lived out a childhood dream by finally taking his own car to the event. After 13 long years, all the STRESSN had been worthwhile! 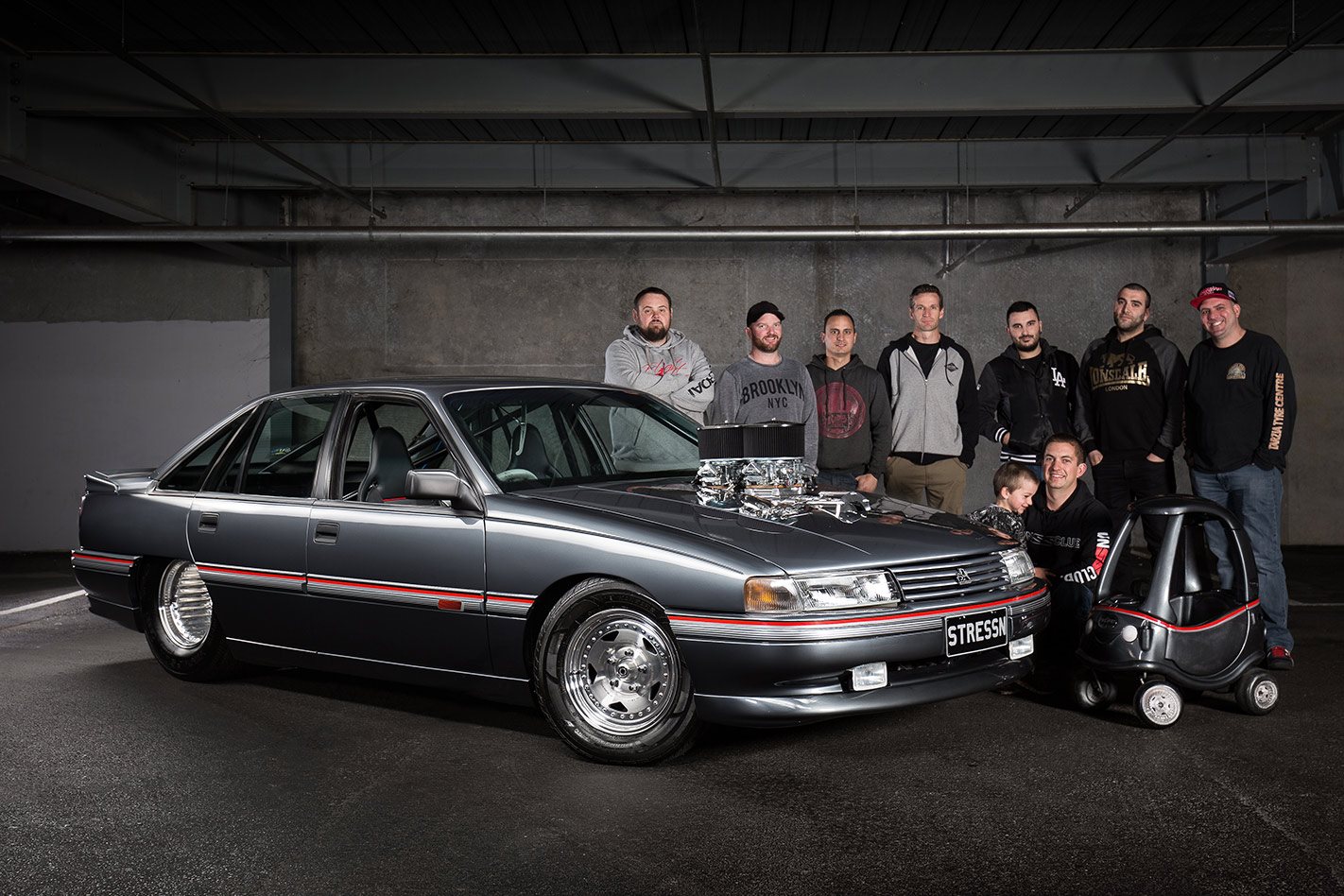