THE opening scenes in this sequel to The Fast and the Furious see three drivers gearing up for a race around the streets of Miami. Tej Parker (Ludacris) is coordinating the illegal shindig, and opts to call in runaway ex-policeman Brian O’Conner (Walker) to make up the numbers. 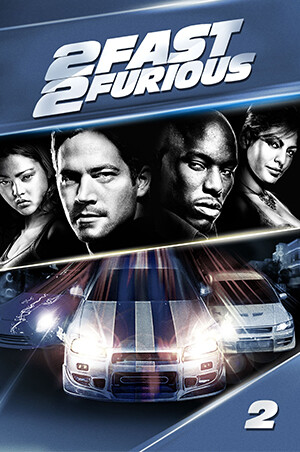 Brian races from his bedroom and jumps into a silver coupe, firing it up to the undeniable tune of an RB26 before flogging it out into the night. This scene alone would etch the Nissan Skyline R34 GT-R into the hearts and minds of thousands of newly crowned petrolheads worldwide.

Brian finds himself thrown straight back into the world he tried to run away from. His R34 gets totalled straight after the race in a pursuit with the feds, who force him back into service to infiltrate the gang of criminal kingpin Carter Verone (Hauser) through the world of street racing – just like in the original flick.

Brian, now piloting a neon-infested Mitsubishi Lancer Evo VII, teams up with old friend Roman Pearce (Gibson) in a Mitsubishi Eclipse Spyder, the duo creating all kinds of chaos in the process of running drug money for Verone, which the feds need as evidence to send him packing.

Among all this, we get treated to a JDM tuner-versus-muscle four-way showdown when the Evo and Eclipse take on a ’70 Dodge Challenger R/T and ’69 Yenko Camaro for pinks. As expected, the race is about as clichéd as the amount of nitrous used, and despite the main characters working for the feds, the number of police chase scenes in this flick would rival The Blues Brothers.

Towards the end, the boys trade in their “from the bottom of a cereal box” JDM rides for the beastly Camaro and Challenger, which both lose their passenger doors literally ejecting unwanted occupants. The Camaro then jumps onto a yacht and all is well with the world.

SURE, it may be cheesy at times and have a rinse-and-repeat storyline, but 2 Fast 2 Furious delivers four-wheeled action in spades. Much like the first flick, it spawned myriad car culture references and quotes that are still used nearly 20 years later – would you run a Gallo 12 or Gallo 24? Unlike more recent entries in the franchise, we’re given a good dose of actual street racing, capturing the early-2000s peak of sex-spec car customisation while still incorporating a tribute to the old-school muscle era we all know and love. And like the original, it helped spawn a new generation of car lovers, and for that it deserves some praise.

MORE Which is the best Fast and Furious movie?
6

Action:
This flick is not short of four-wheeled action. Highlights include a bridge jump in JDM icons, Dodge Rams destroying an entire police fleet and a ’69 Yenko Camaro jumping onto a yacht

A bumper week of auctions saw plenty of money laid down