The paint catches your eye, the Monaro turret draws you in and the suicide doors seal the deal

AGAINST a background of yellow and black barricades and three-deep onlookers at the Street Machine Summernats, this Holden ute looked like it was milled from a solid piece of steel. That’d be due to the integral turret/B-pillar cap (the Holden one is a plastic add-on), the lack of fuel filler or door handles, the custom sidelights and the just-right lowering, highlighting the glorious paint. For a late-model streeter it had me impressed.

And then the bloke who’d just driven it into the Meguiar’s Judging Pavillion clicked open a door, revealing the ute’s biggest secret — suicide doors. And that roof looks a bit lower than standard … 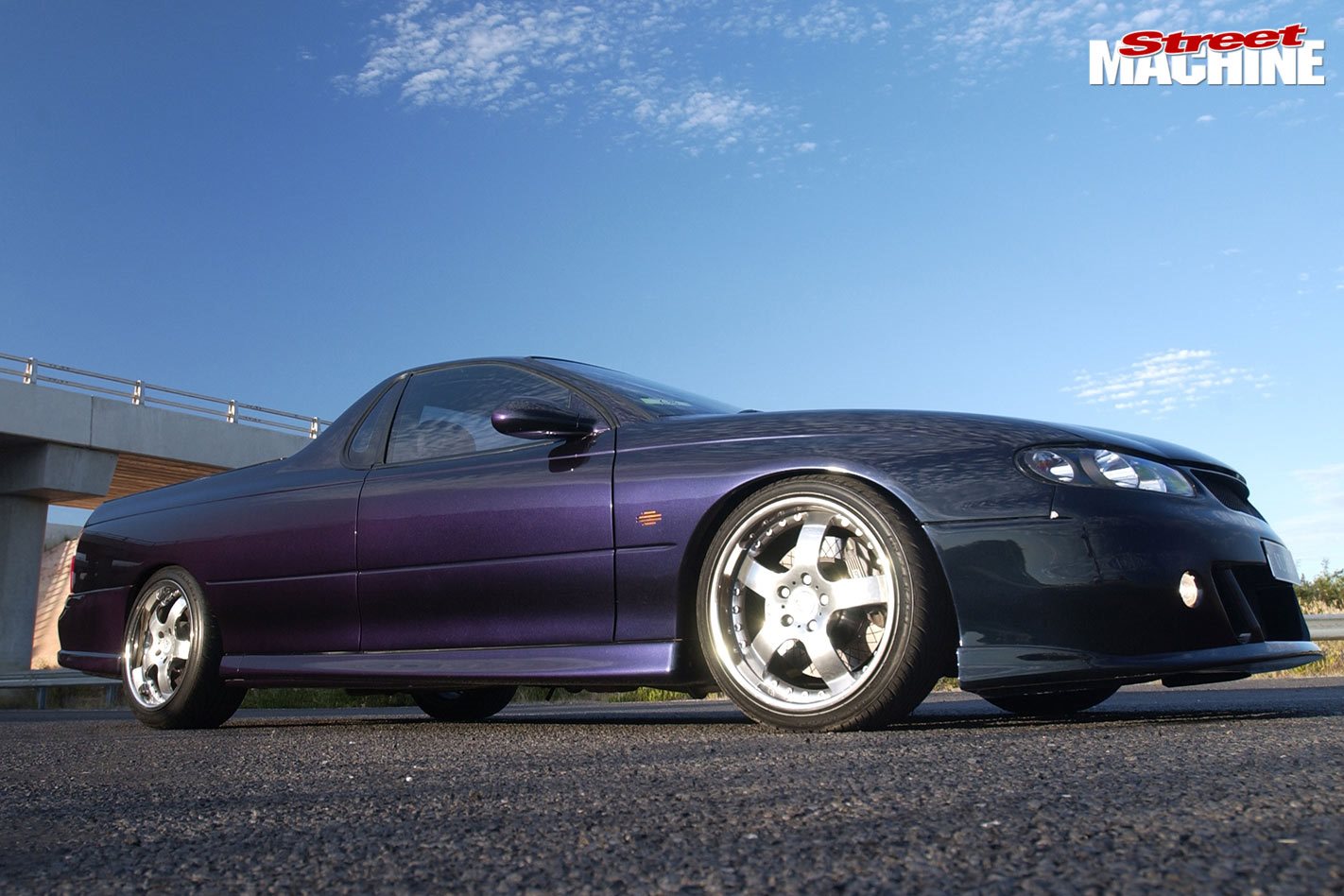 Canberra local Richard Joyner bought this 2001 ute brand new. “This was one of the first VUs in Canberra,” says Richard. “And I knew there would be 20 million of them around here real soon, so I wanted to do something that would knock ’em dead.”

With Monte Carlo Magic Standox paint and a set of 19s, a place in the Top 60 at Summernats 15 and 16 proved that Richard was on the right track — but a lot has changed since then.

“When the Monaro was launched, it got me thinking,” Richard continues. “I thought bits of the Monaro turret could be used to lower the roof of the ute. And that started us thinking about what else we could do while we were at it. So suicide doors made it onto the list.” 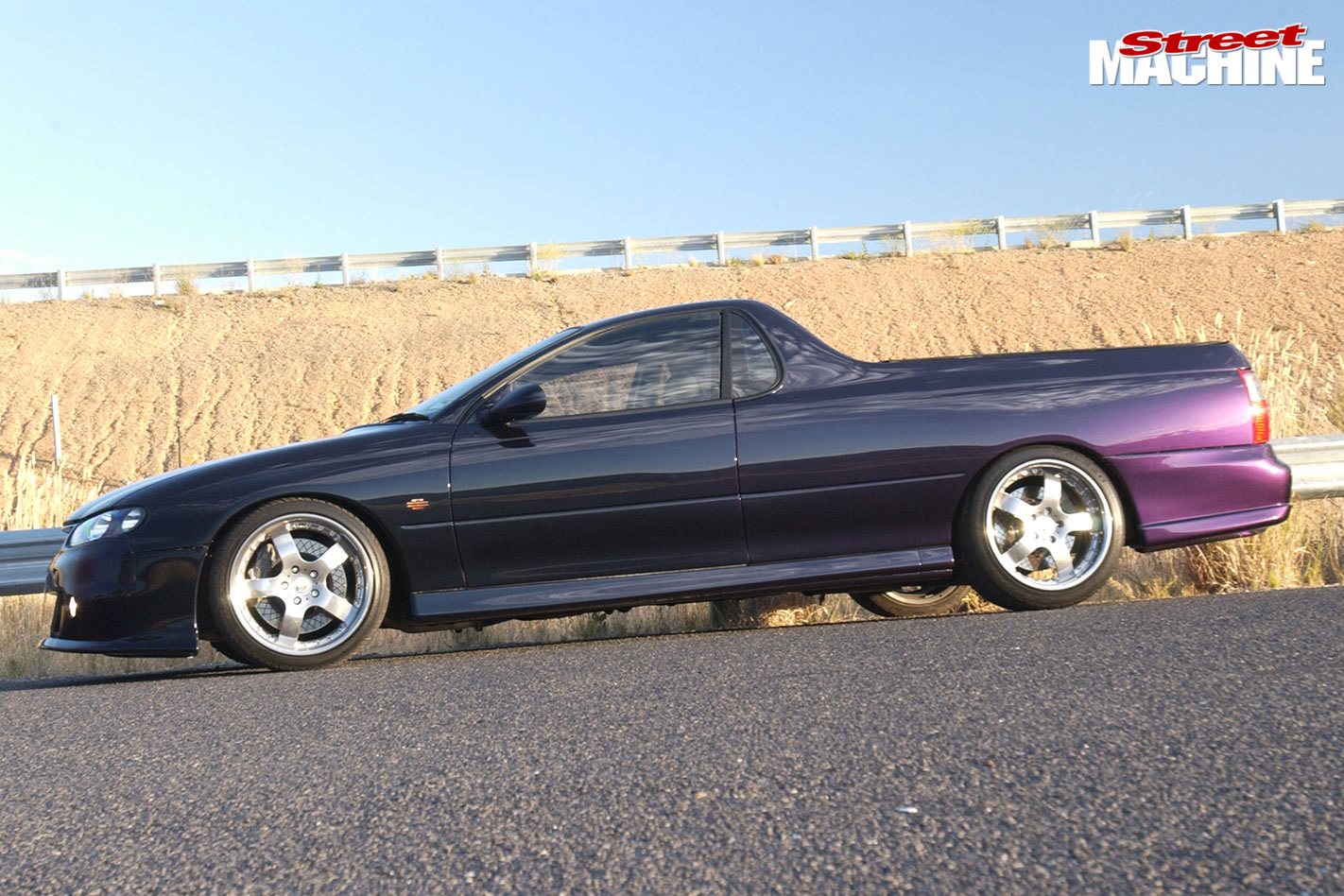 “Richard reckons it rides firmer and tighter than standard,” reports Drago. “Makes sense to me. The strengthened B-pillars reduce twist in the shell, making it tighter.”

The ‘us’ in this instance is Sydney body bloke Drago Ostric, who pummelled opinions with his high-calibre Gemini wagon. Drago and his Sefton Smash business have earned a reputation for turning out some top-quality streeters in recent times. After a short and unsuccessful visit to another business, Richard and his Holden found the way to Drago’s doors.

Drago says: “Most of the design was what Richard came up with. He had a vision of what he wanted in the car. I took his ideas and made them reality. The front half of the turret is Monaro, which gives us a factory Monaro windscreen and A pillars. The rear section of the turret is ute. The rest of it is all fabricated.”

The fabrication took a lot of time. “Just a massive job,” says Drago of the door conversion. “The rear pillar, the B pillar to where the quarter panel meets under the little window, had to be reinforced to the same strength as an A pillar [to support the doors]. Richard got some hot rod suicide hinges in from the US which made life a bit easier.” 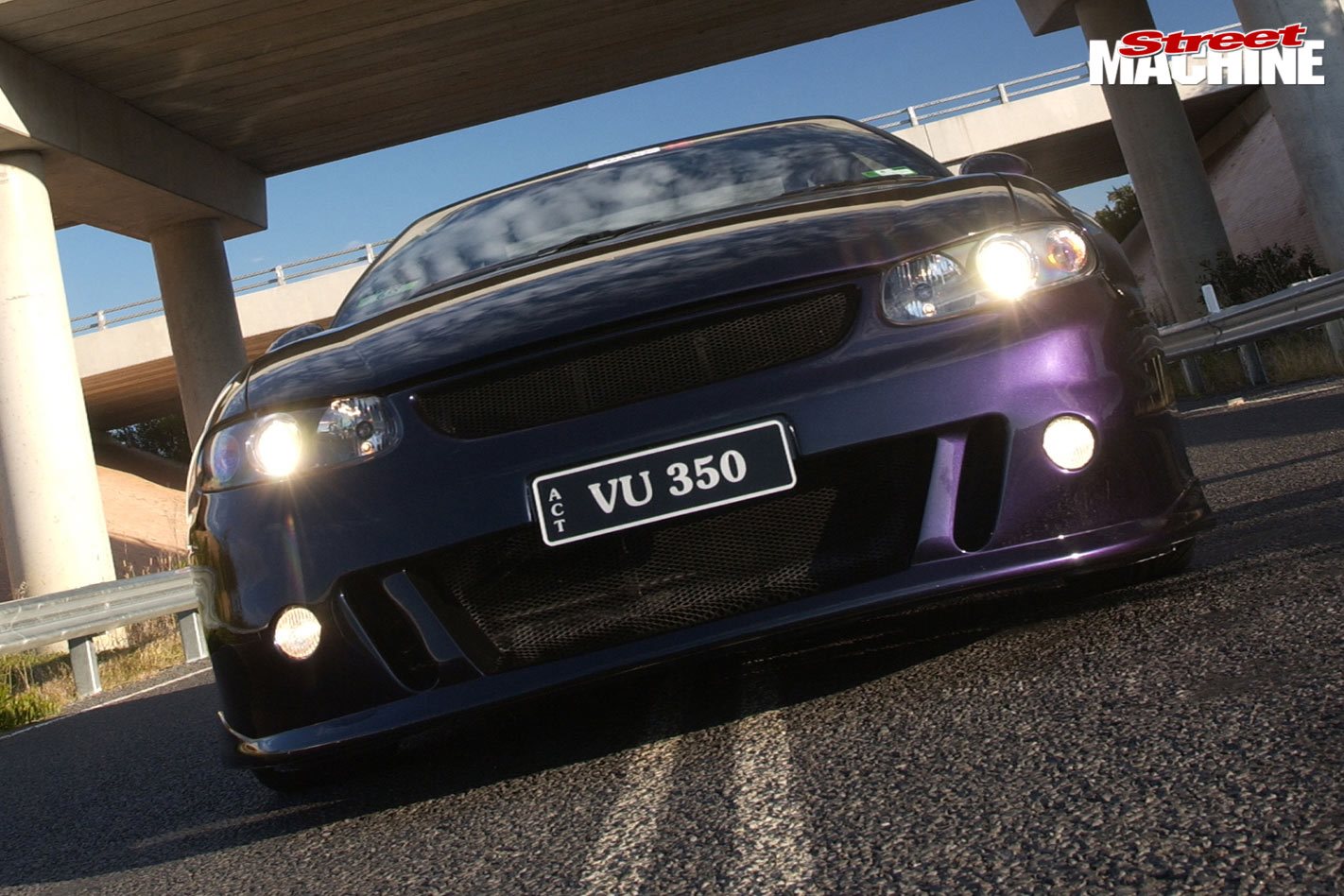 Even though it’s not his car, Drago’s the bloke who did most of the work. He’s obviously quite proud so we’ll give him the last word: “It’s been phenomenal,” he says simply. “It’s a very, very nice car.”

To line up with the new slope of the A-pillars, the door frames are a blend of Monaro and ute, with a ute/sedan skin and the hinges and latch mechanisms flipped. Operation of the latches is electric and manual.

“I think the doors were on and off the car more than a dozen times to check the fit,” says Drago. “I lost count!”

With the doors swinging straight and free, attention turned to the turret. Although it has smooth factory styling, the standard Holden ute uses as much painted plastic as steel for its cabin skin. Richard’s doesn’t any more because Drago spent a fair chunk of the loosely-recorded 320 hours of work building the lowered lid in steel. A carefully formed wire frame established the shape of the turret, and small hand-beaten sections of skin were grafted in place, one by one, to form a factory-looking whole. 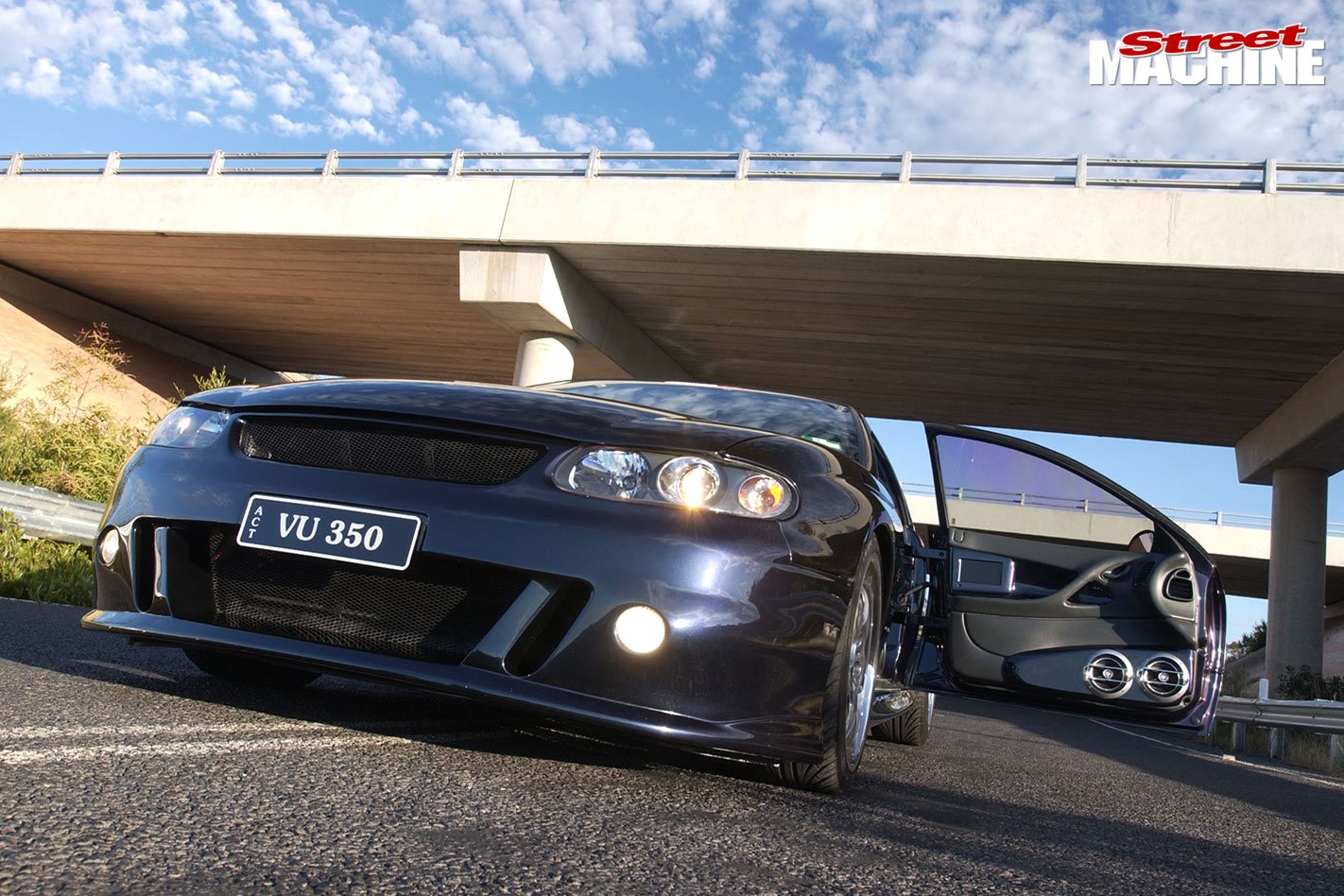 And then there are the sides of the tray and the tailgate, massaged with similar care. “The height is the same, but by taking the line out and putting a smaller rolled edge on it, you get a bigger ‘look’ through the panel,” says Drago. “Especially the tailgate — it looks fat! But the height of it hasn’t changed from stock. It was difficult to work with the quarters and not get any rippling.”

There are other neat ideas evident, too. “We shaved the door handles and fuel filler and added the custom sidelights,” says Drago. “The door handles are almost necessary with the suicide, but after smoothing the tray sides, we thought we’d clean things up with the filler and lights, too.”

Not every idea Richard and Drago came up with was a success. “We tried to get the hinges off the tailgate,” reveals Drago. ”But it was a no-go — just impossible. We looked at a suicide side-swing set-up but there wasn’t enough room [for strong hinges] in the tail-light area. It was a little disappointing — we didn’t have a lot of options. I’d still like to play with it, though.” 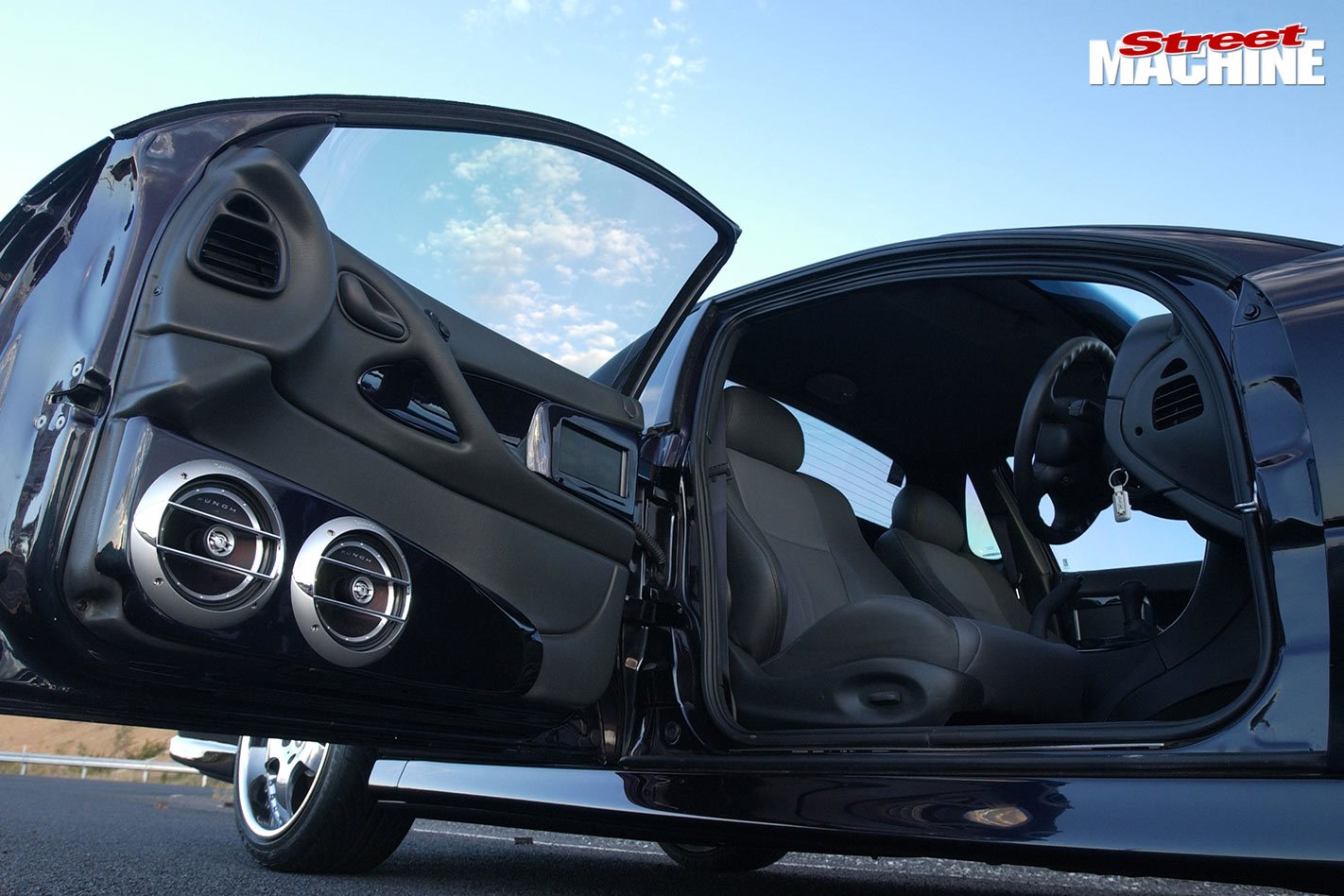 Drago performed all the body work, including liasing with an engineer for rego. “There’s a bloody lot of filing in it,” says Drago, tactfully. “I think we spent a week grinding it.”

With the metal complete, the ute was refinished in Standox Monte Carlo Magic which shows an almost impossible-to-photograph array of colours. Walk along the car — especially late in the afternoon, the time these photos were taken — and black, violet, blue, green and copper hues appear.

The glass is an expensive one-off job although if Richard and Drago were to attempt this again, they’d build around factory glass from something else. Adding an extra touch of class to the car is the non-standard nose and tail plastic. 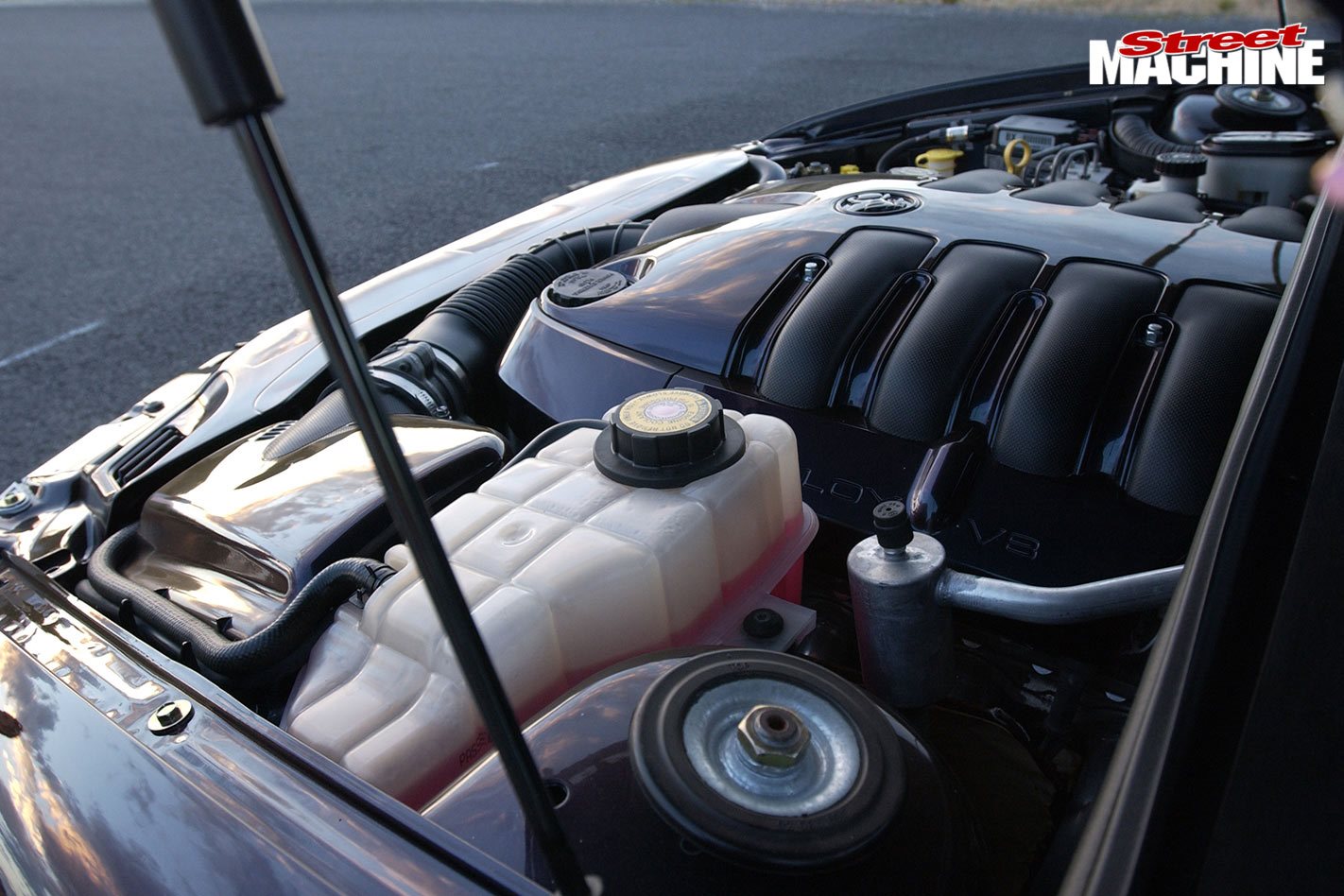 Mechanical mods are minimal: Pacemakers pipes, Koni dampers and King springs. To fit the 19x10 rear wheels, the wheelhouses were mini-tubbed by John Taverna Chassis. Filling out the space behind the wheels are enormous Harrop brakes. Oh, and it’s a Gen III V8 and six-speed powering it all along.

Richard is pretty damn happy with his ute, yet has further plans for it. If he follows through with his ambitions, the underside will be stripped and rebuilt to the same standard as the topside.

“I’m a ute boy,” he grins. “Otherwise I’d buy and build something else. Nothing’s on this ute because it needs to be — it’s there because I just want it!”