STANDING out at SEMA takes something special. You need a vehicle not seen before, presented in a way that could stun a rhino because the show-goers here are hardened industry professionals who’ve seen it all before. 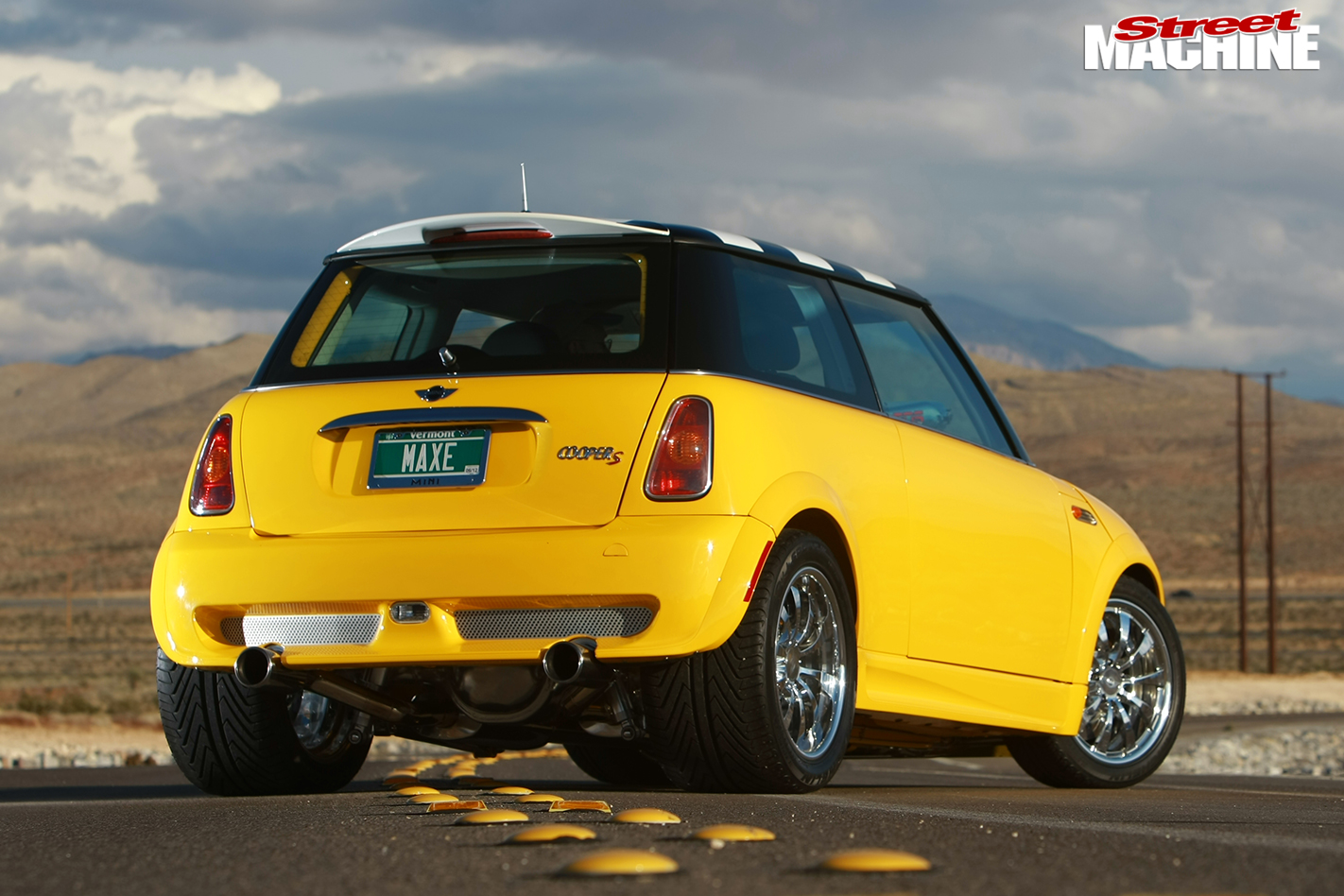 Vermont’s The Crank Shop wanted to create such a display and succeeded with the monstrous Hemi Cooper. That’s right — this Mini’s got a Hemi! In the tradition of gassers like Pommy Ford Anglias and Morris Minors stuffed full of blown goodness, The Crank Shop wedged a blown 392-cube missile into the engine bay of this Mini Cooper. 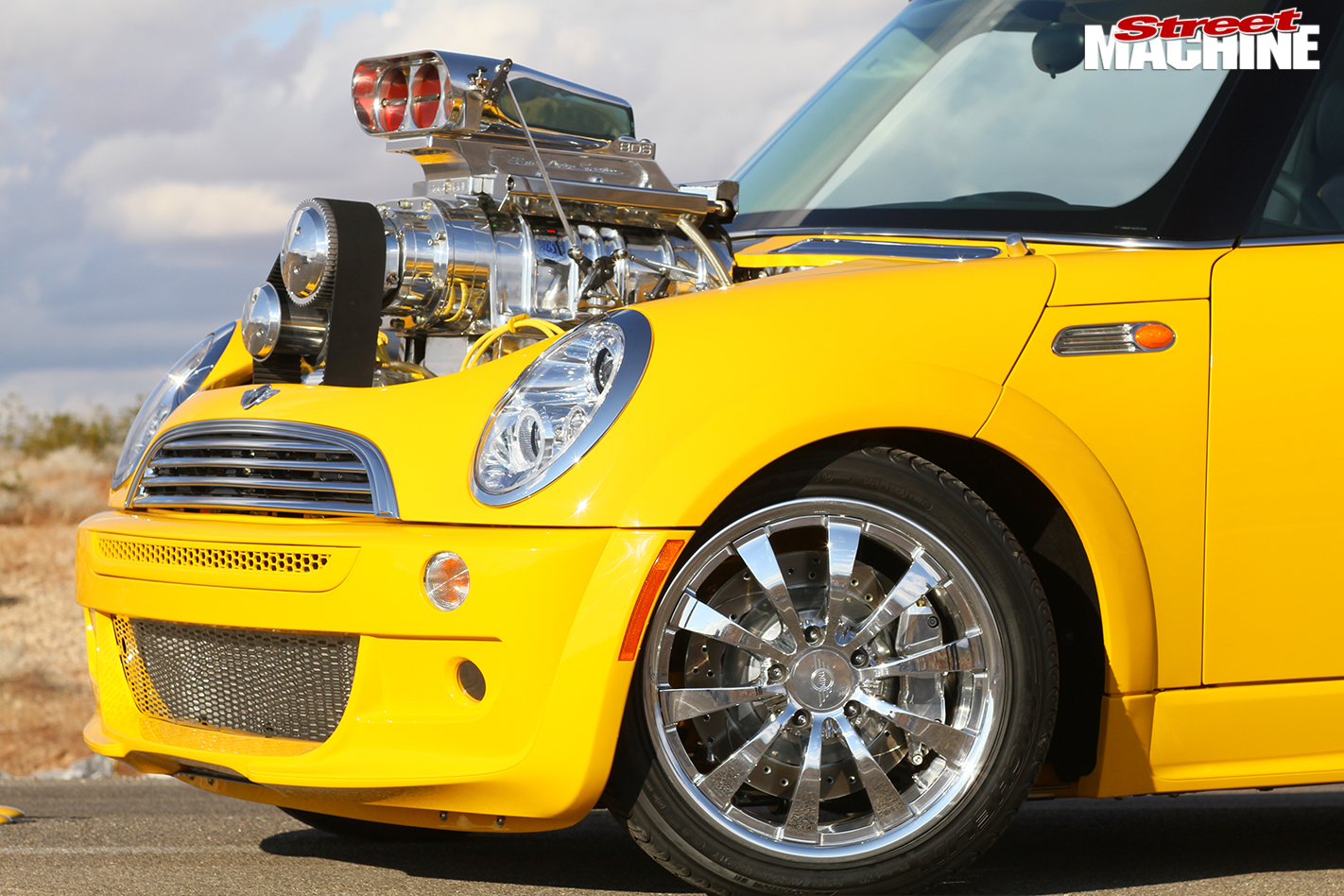 “We wanted to build a little car with a big engine, one that had never been done before,” the shop’s Larry Audette explains. “The only car we came up with was the Mini.” V8s have been shoehorned into Minis before but this is the first one we’ve seen in a new Mini.

“We checked out the old Mini but it was just too small. This Mini Cooper was in good shape and all the parts we didn’t need we sold on eBay,” Larry says. 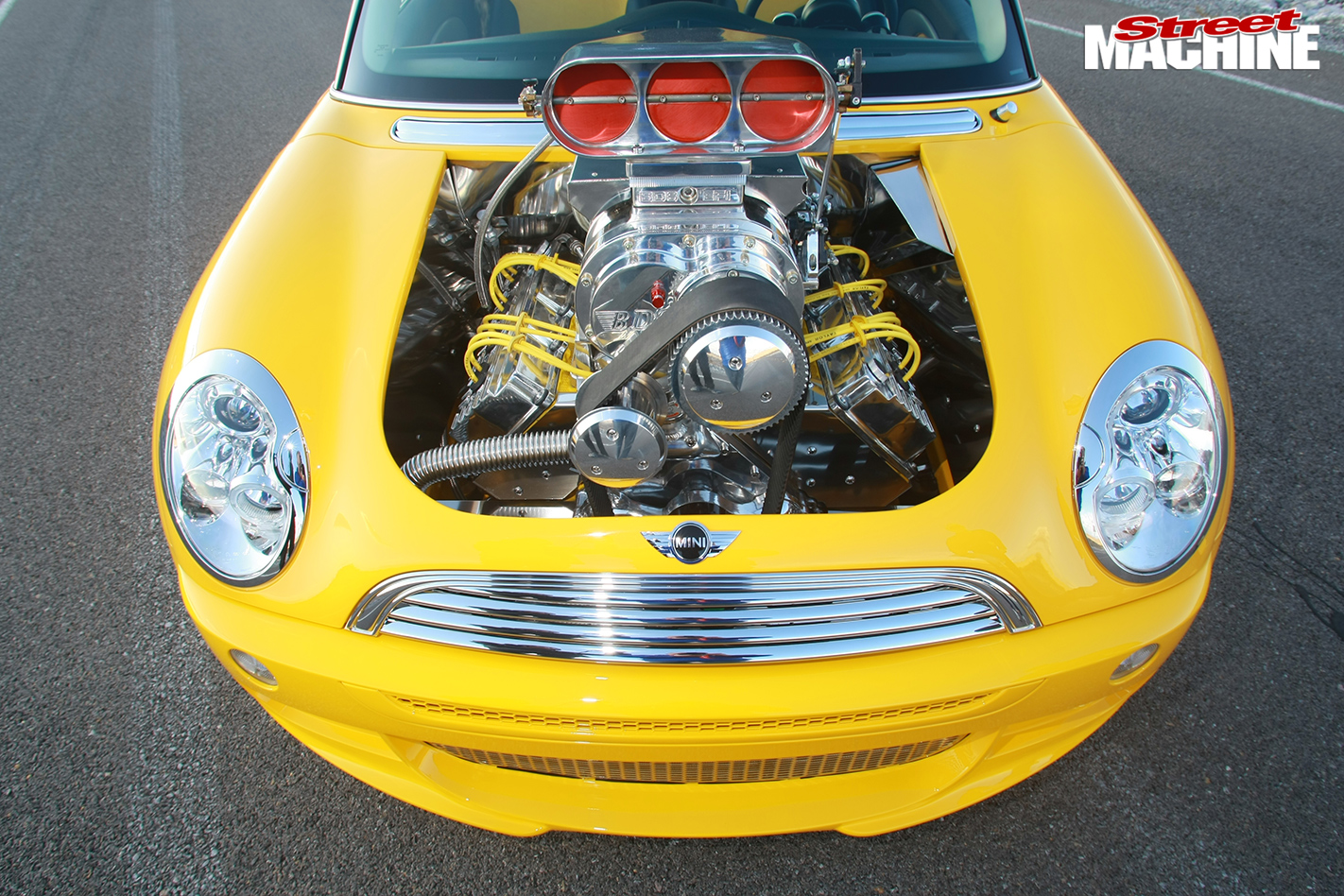 Just as the modern Mini is a recreation of a legendary classic, so too is this late-model Hemi engine. The 2003 Mini Cooper’s short snout packs 2004-vintage Mopar muscle that started life as a 5.7-litre Hemi V8 but has been stroked out to 6.4l thanks to a Callies Compstar crank, rod and piston kit.

You might think a V8 Mini would cause a stir but maximum visual impact always calls for a towering supercharger, so a polished BDS 8/71 and an EFI injector hat stand on top of a custom manifold. 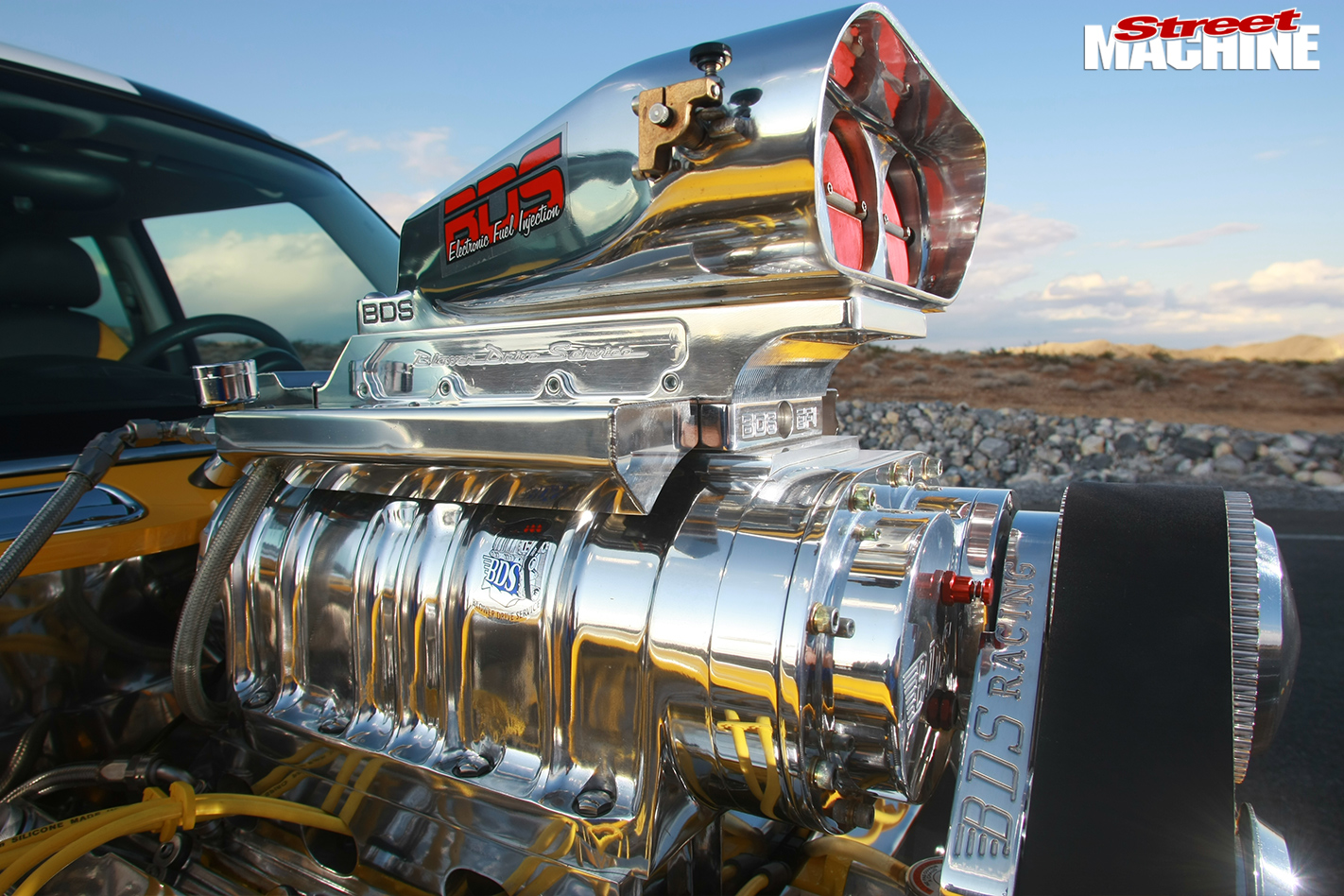 “The biggest problem we had was fitting the Hemi into the car,” Larry says. “We didn’t want to alter the outer body of the Mini or the hood and grille — even the original firewall remains intact.”

Erm, Larry — it looks like you failed on the hood! The blower and injection hat have punched through it and left little behind. Well, it was always going to be hard to squeeze an earth-moving 650 horsepower donk under the stock bonnet. 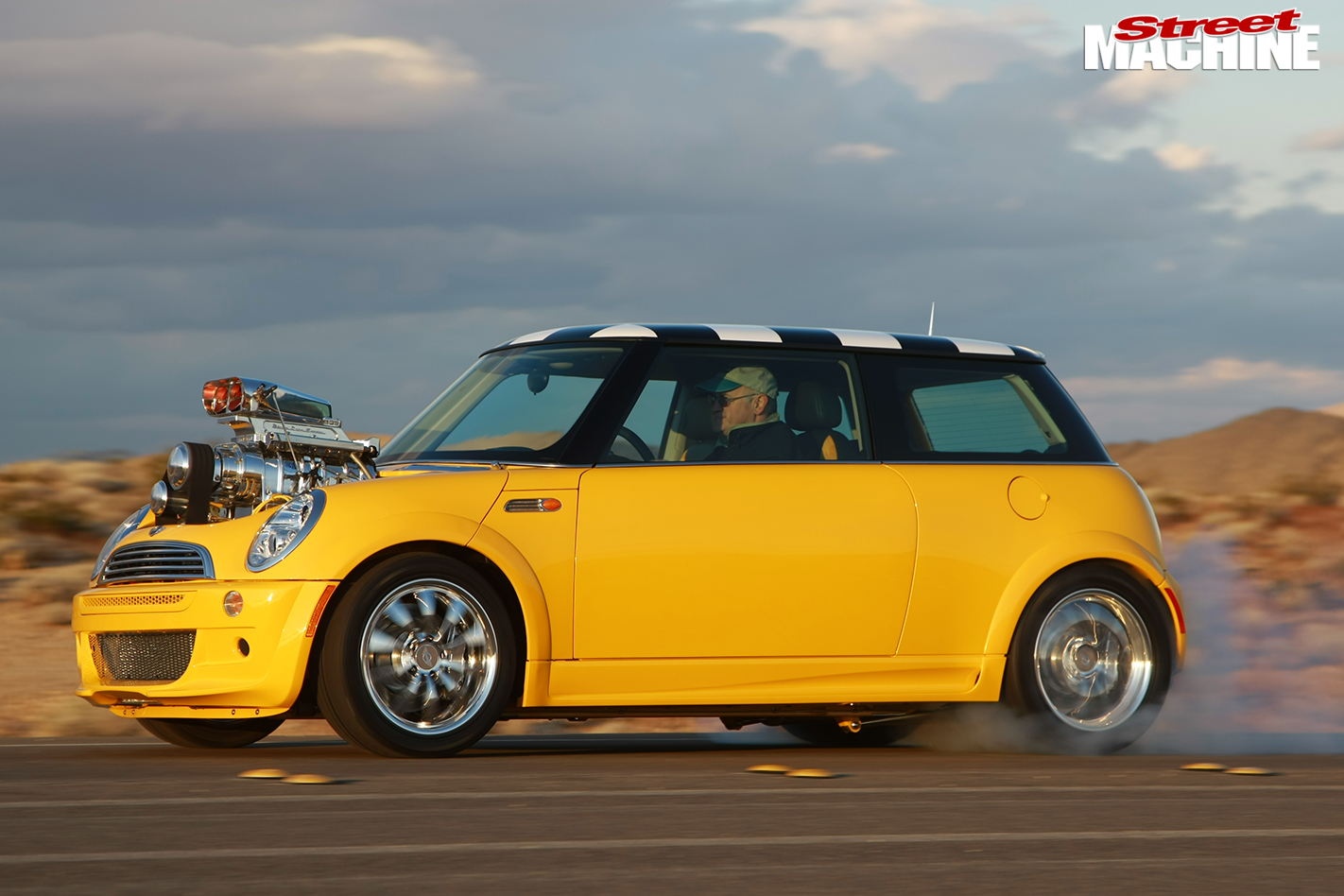 The Hemi Cooper retains a factory stance as it squats over its big Boyd chromies. Airbags slam it harder when it's on display

It may have been easier to move the firewall as the engine had to be shortened by three inches to fit. This involved fabricating a custom timing-chain cover and water-pump housing and all their associated brackets. To fit the two-core radiator between the blower drive and the original grille, it was cut down seven inches and given a 1½-inch bow to follow the curve of the front end. The custom manifold moves the blower assembly forward to create clearance at the rear. 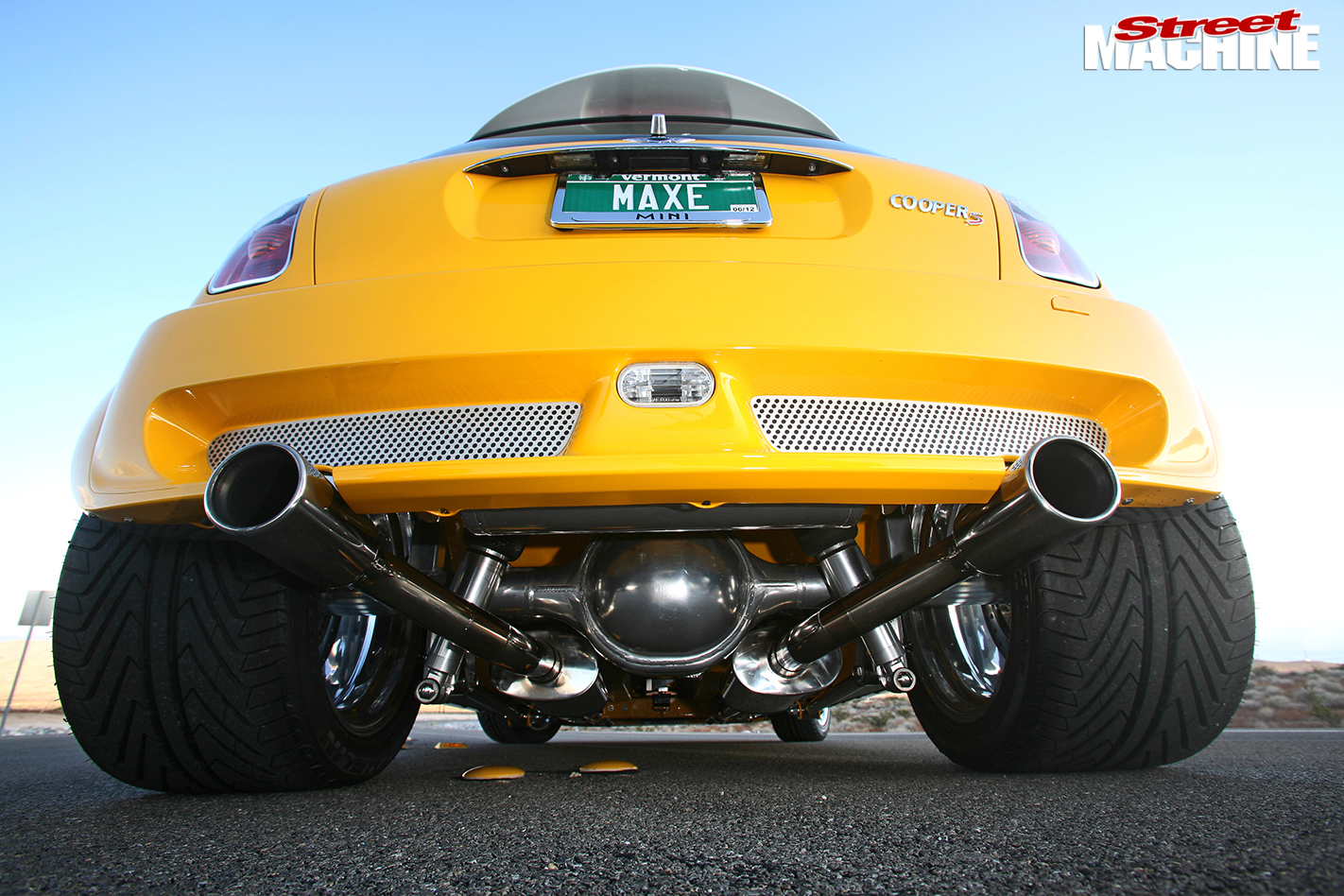 Ignoring the blower, the Mini body really does appear stock. All the dimensions are as intended by BMW but an aero body kit has been fitted and the door handles have been shaved and filled. The PPG paint is a Corvette colour that contrasts nicely with the polished supercharger and wheels, while the checkerboard roof is classic Mini fare.

Underneath it’s a different story, with the floor and factory suspension flung and replaced by a 2x4in tube chassis, from which hang a Mustang II front end and a four-link rear. 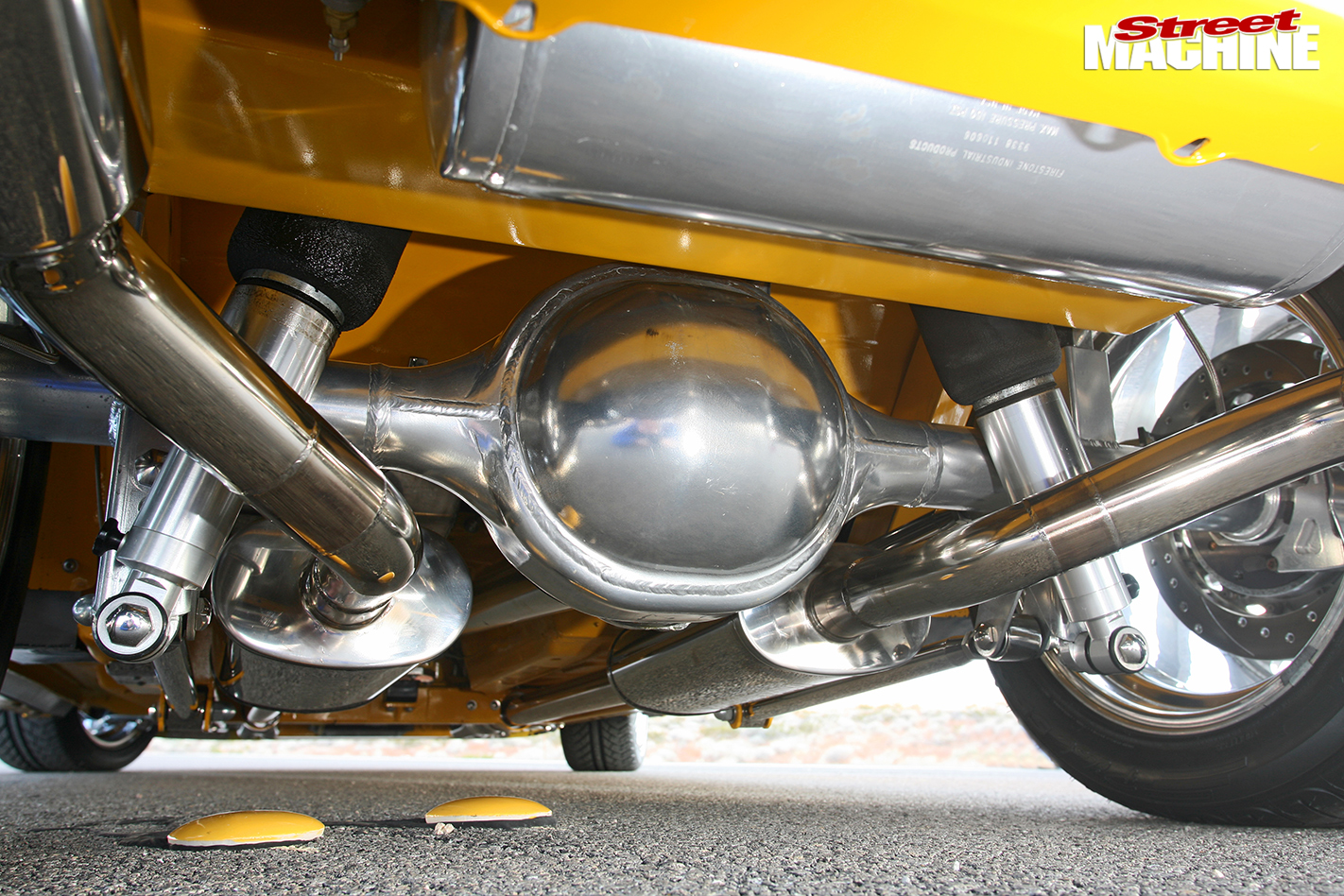 Just another tarted-up Mini? Nope, but the rear wheel drive and wide rubber are well hidden

Just as they did on the body, the team kept the inside looking stock, albeit reworked. The original seats, dash and gauges were retained and re-covered. “Getting the BMW electronics to play ball so that the gauges, lights and other accessories still work was tricky, but we almost have it all nailed,” Larry says. 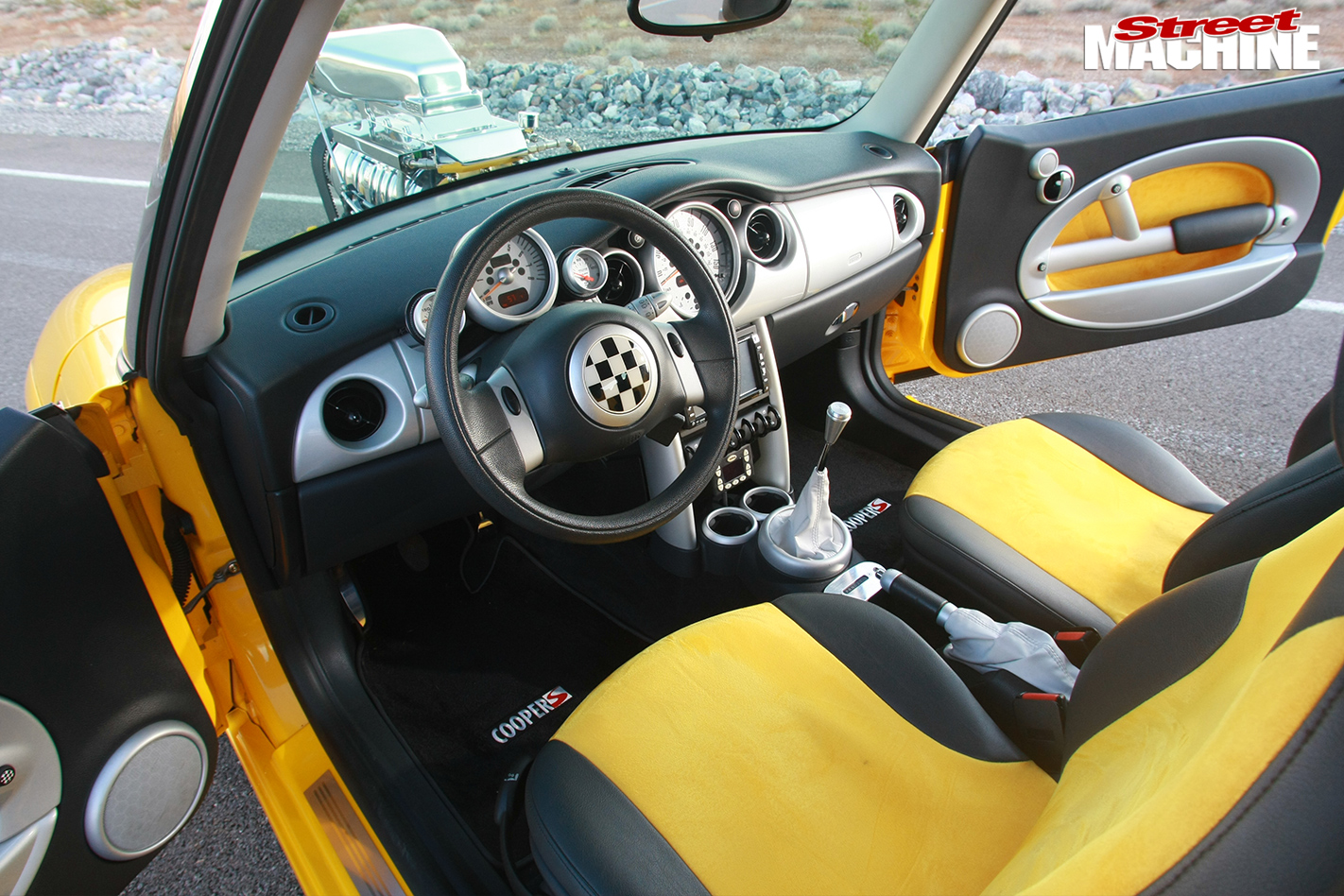 Some interior space has been sacrificed to make room for the big Chrysler four-speed auto, while more was lost at the back for the massive 335-wide hoops, along with the Sony amps and 12in speakers.

Under the floor is a custom fuel cell designed to go over the 36in-long driveshaft — remember that the Mini was originally front-wheel drive. The driveshaft feeds grunt back to a 42in-wide nine-inch. 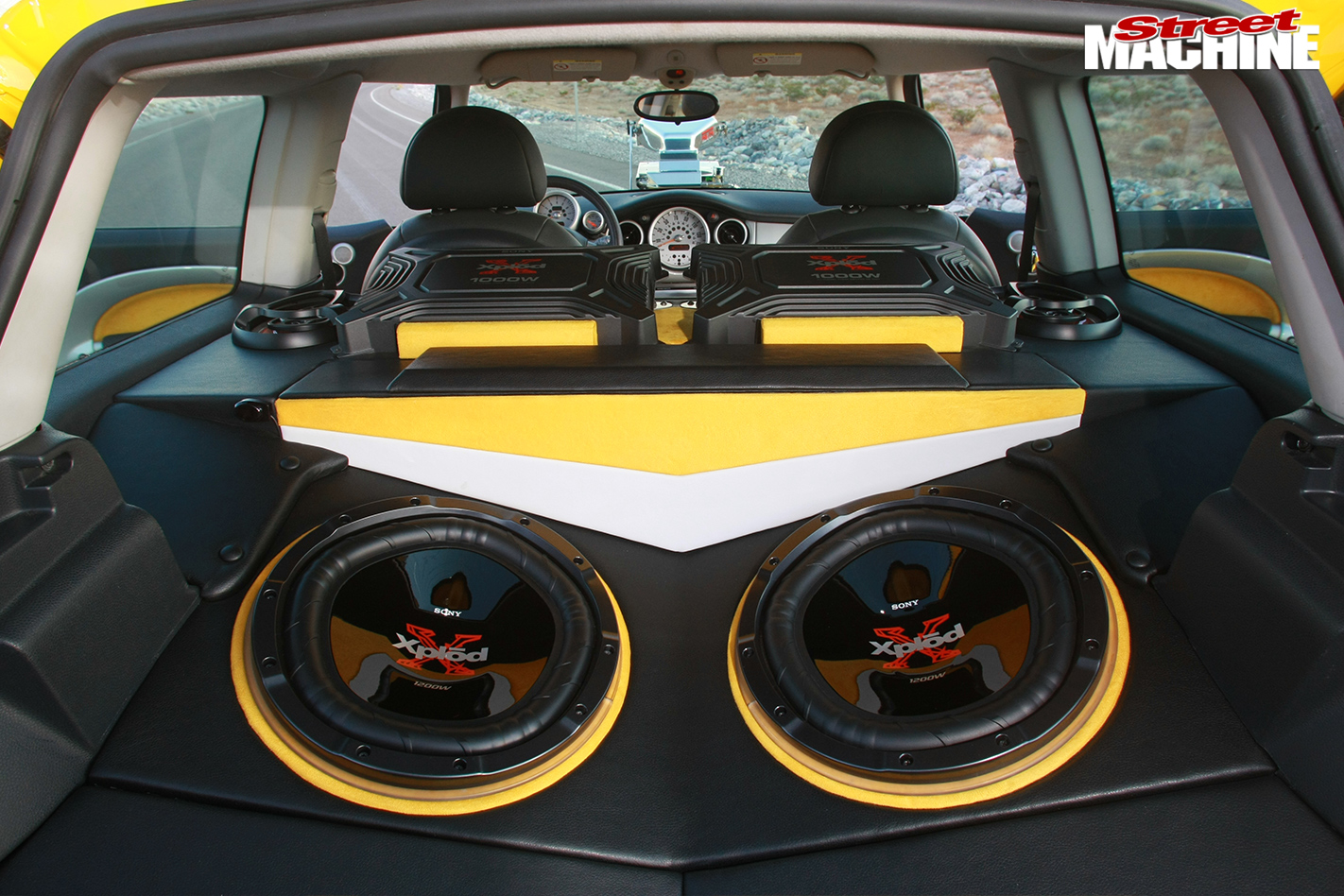 While the Hemi Cooper scores as a draw card it’s also a driver. “It’s good in a straight line and stays straight under power,” Larry says, “but it’s a bit front heavy in the corners.” 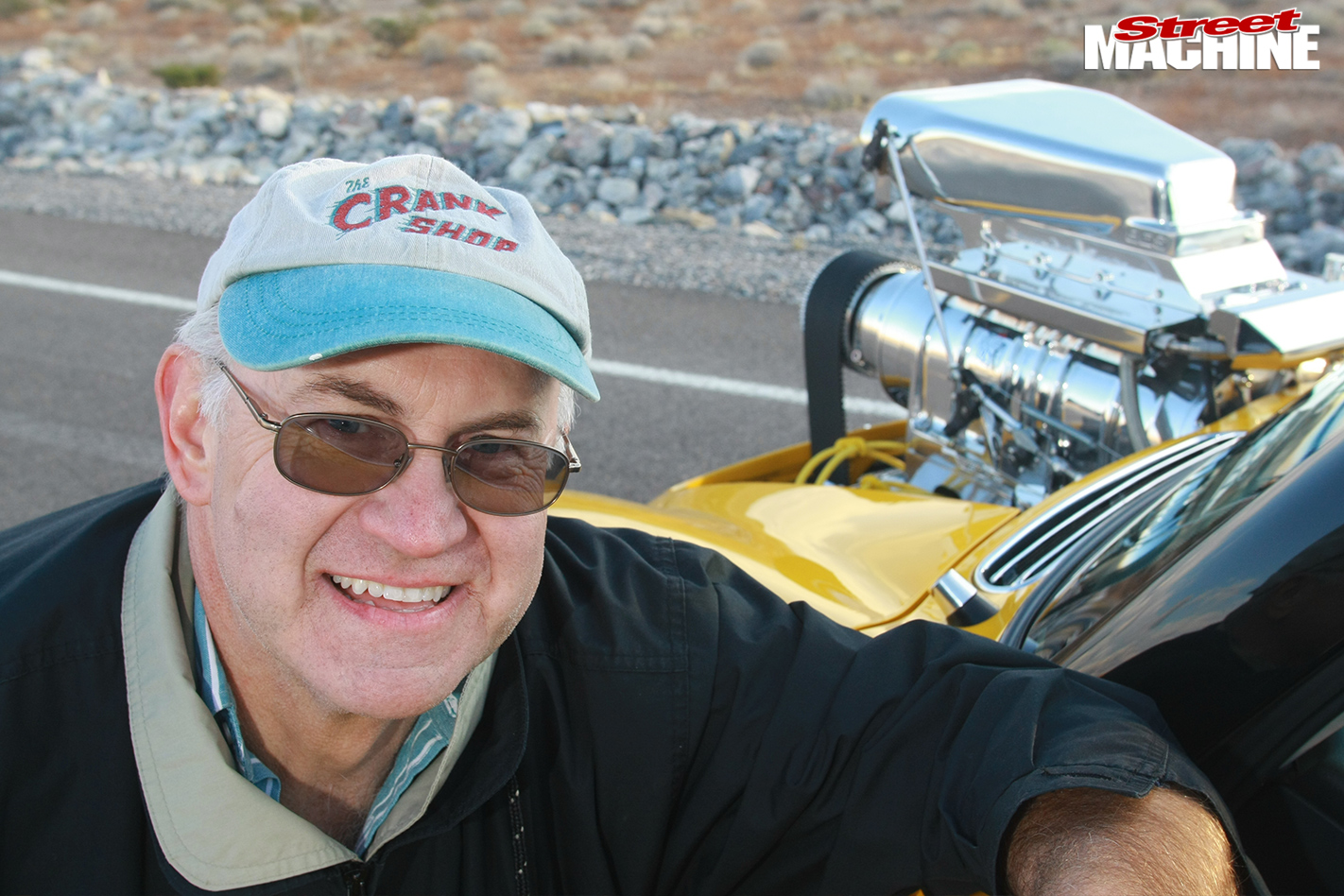