ANYONE who’s even half-keen on burnouts will have heard of Justen Brown. His bright orange VG Commodore ute WONAGO plays an active role in Western Australia’s flourishing skid scene, and they have been kicking arse and taking names for years. 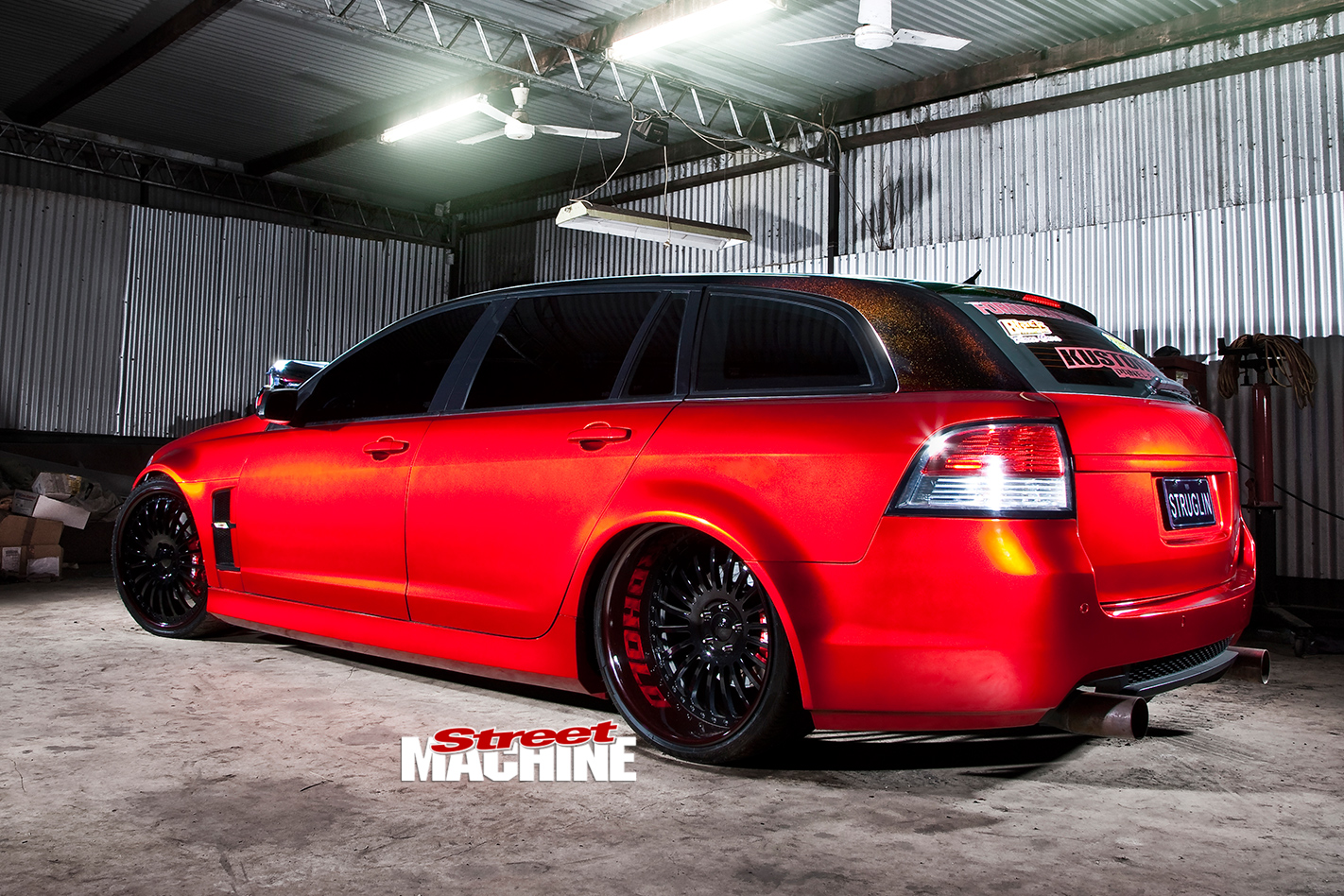 Together they’ve enjoyed two Summernats Burnout Masters berths, won the skid comp at Mallanats 2013 and cleaned up countless powerskid trophies in between. But now he’s got a new toy, and it’s certifiably bad-arse. 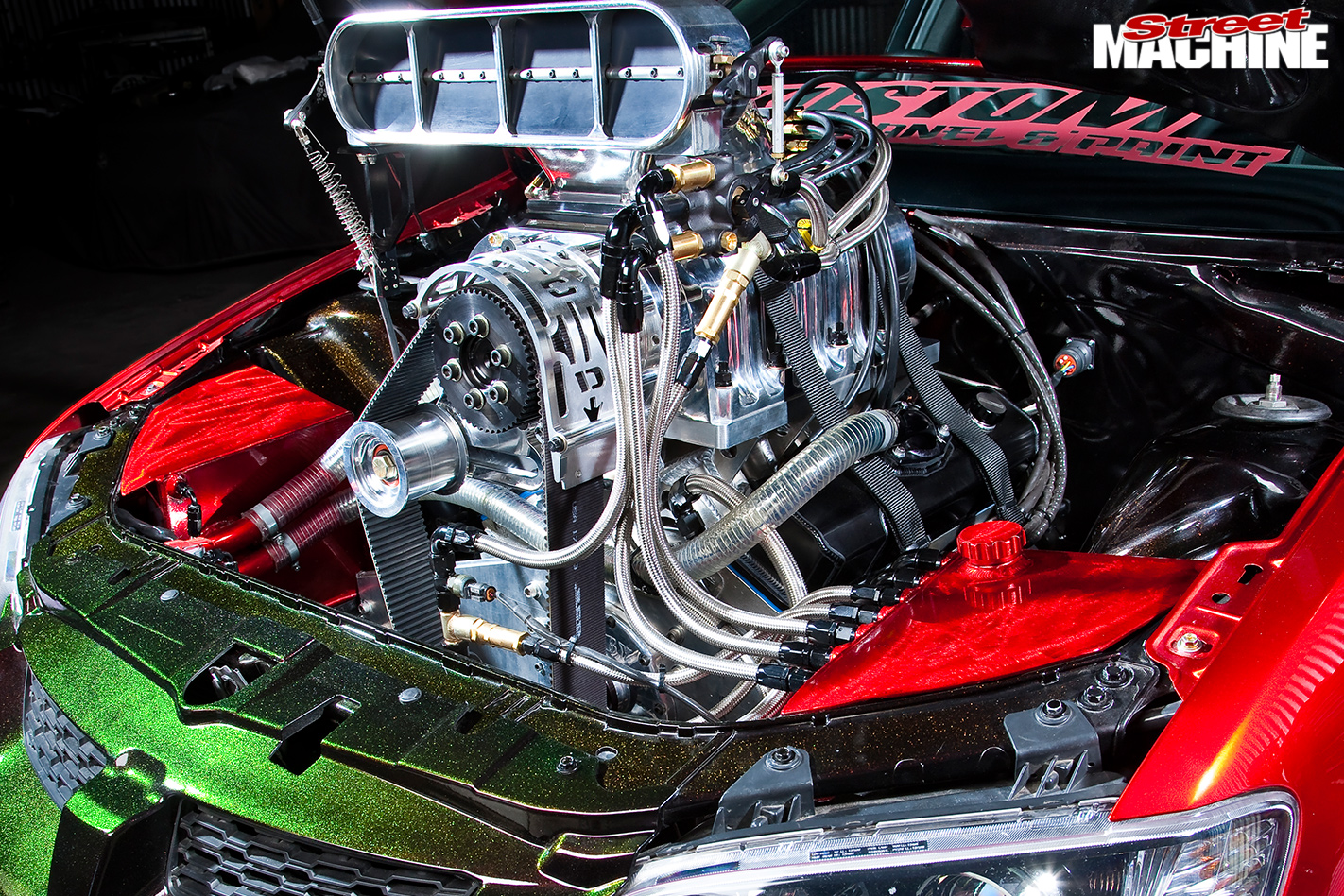 “When I went to Summernats with the ute I got to thinking that it might be getting a bit stale, and I figured a new car would really mix things up,”

Justen says. “My missus had a VE Sportwagon as a daily driver and I always thought it’d look really cool with a blower hanging out the bonnet.” 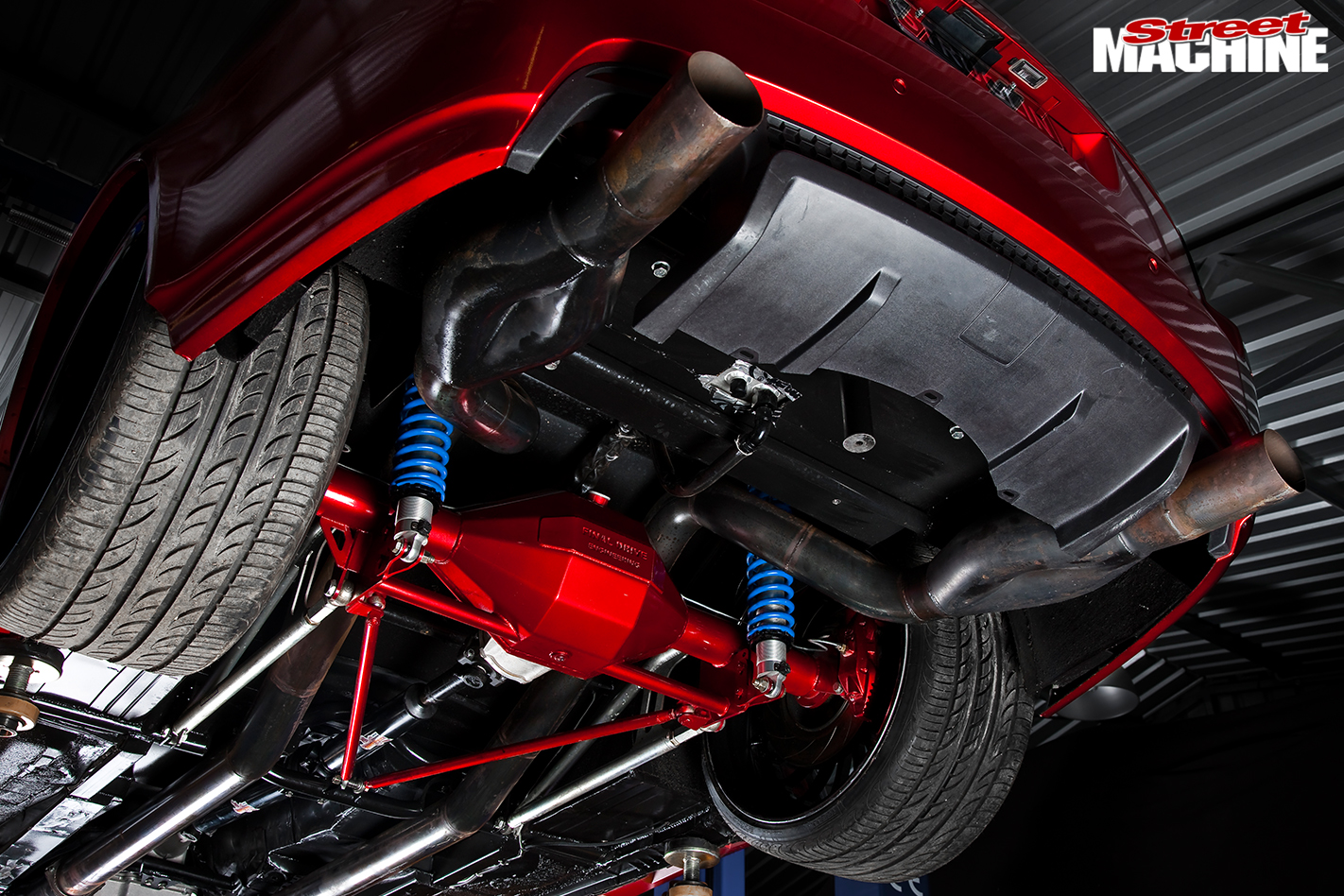 As the proprietor of Fordhold Wreckers in Perth, Justen is always clued in on what damaged vehicles are coming up for auction, and eventually the perfect base for his project presented itself – a statutory write-off VE Sportwagon V6.

Justen dragged the wagon home, stripped it bare and began to repair the damaged shell, which essentially meant bolting up a replacement radiator support panel. The rear floor was bent, too, but that didn’t matter a great deal seeing that Black Magic Race Cars was cutting out the rear half of the floor. 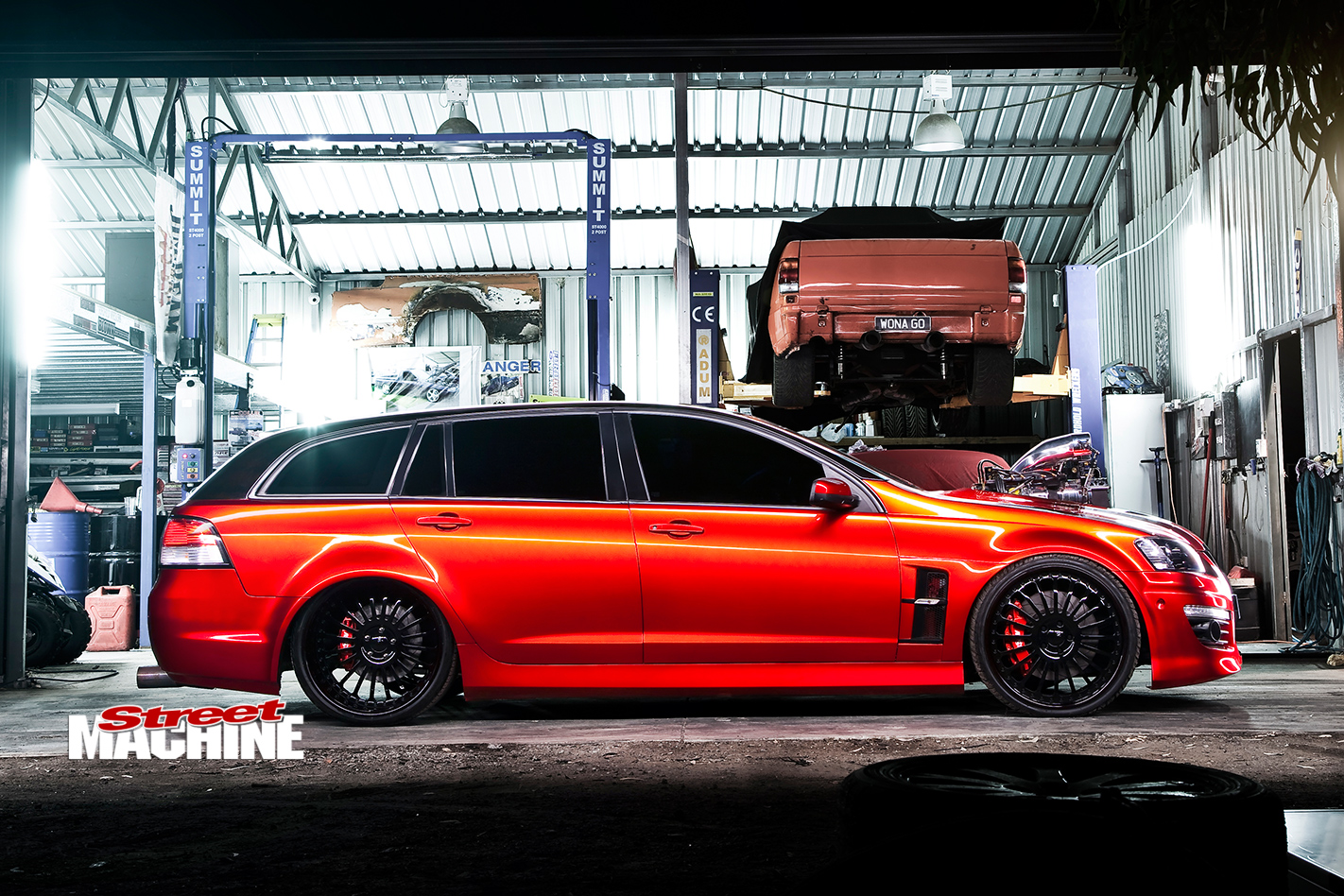 Huge tubs were fabricated to accommodate the 22x12in KWC billets, 315/35/22 tyres and slammed stance that Justen had planned. Blacky also took care of the flat firewall, six-point ’cage and engine plate, and then the car was shipped off to Joe at Kustom Panel & Paint.

There the wagon had its fuel filler shaved and was fitted with a full E3 HSV bodykit, before it was treated to a brilliant black/candy apple red two-tone paint job. “The quality of the paint is awesome,” Justen enthuses. “I’ve never had one this good.” 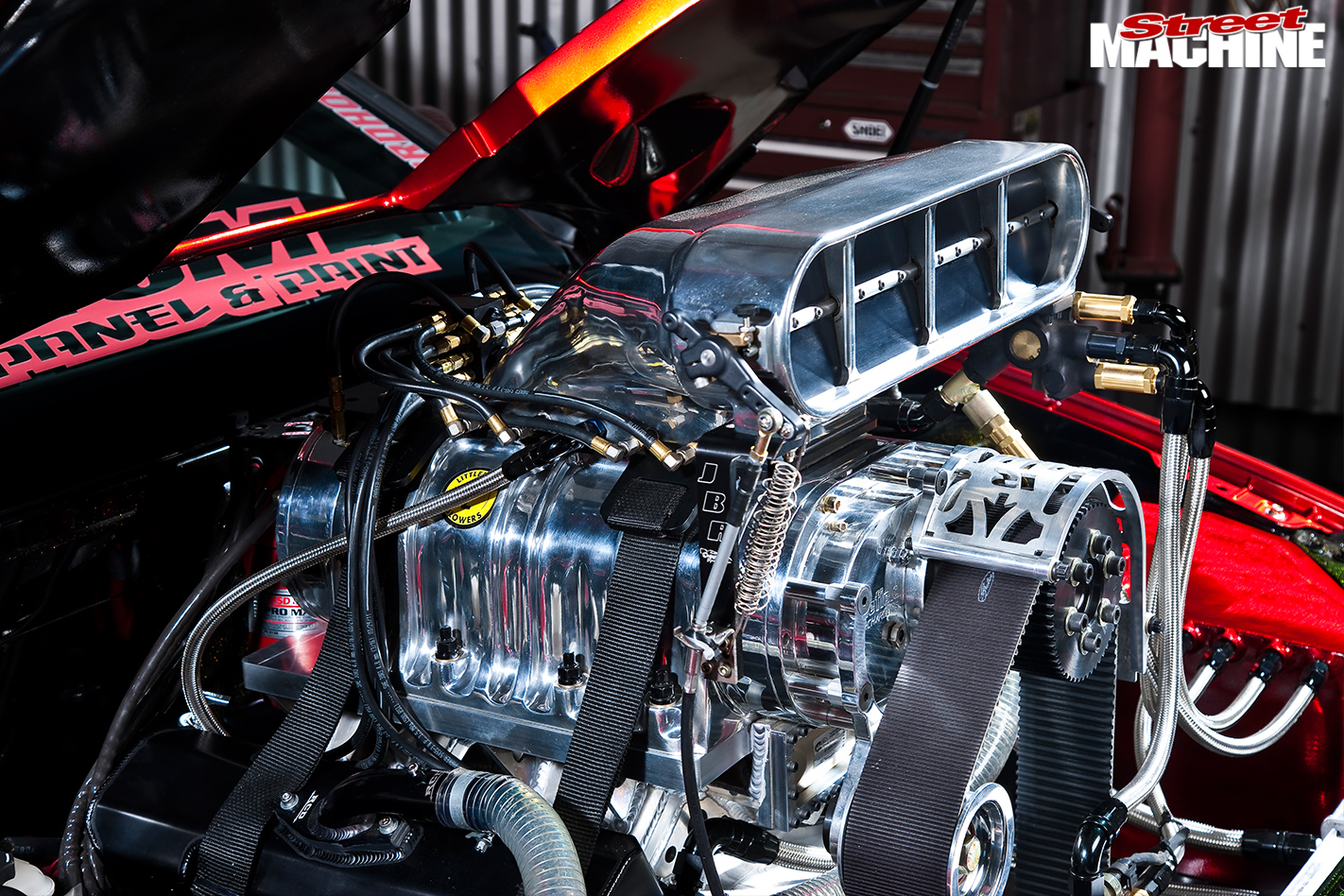 Once the tubbed, ’caged and painted roller was back from the panel shop, Justen completed the seemingly insurmountable task of finishing the car in just two weeks.

“That included fitting the motor and ’box, fully rewiring the car from scratch, fitting the interior, doing the brake lines and making up every braided hose on the car,” he says. “We had a few late nights, but we got it there.” 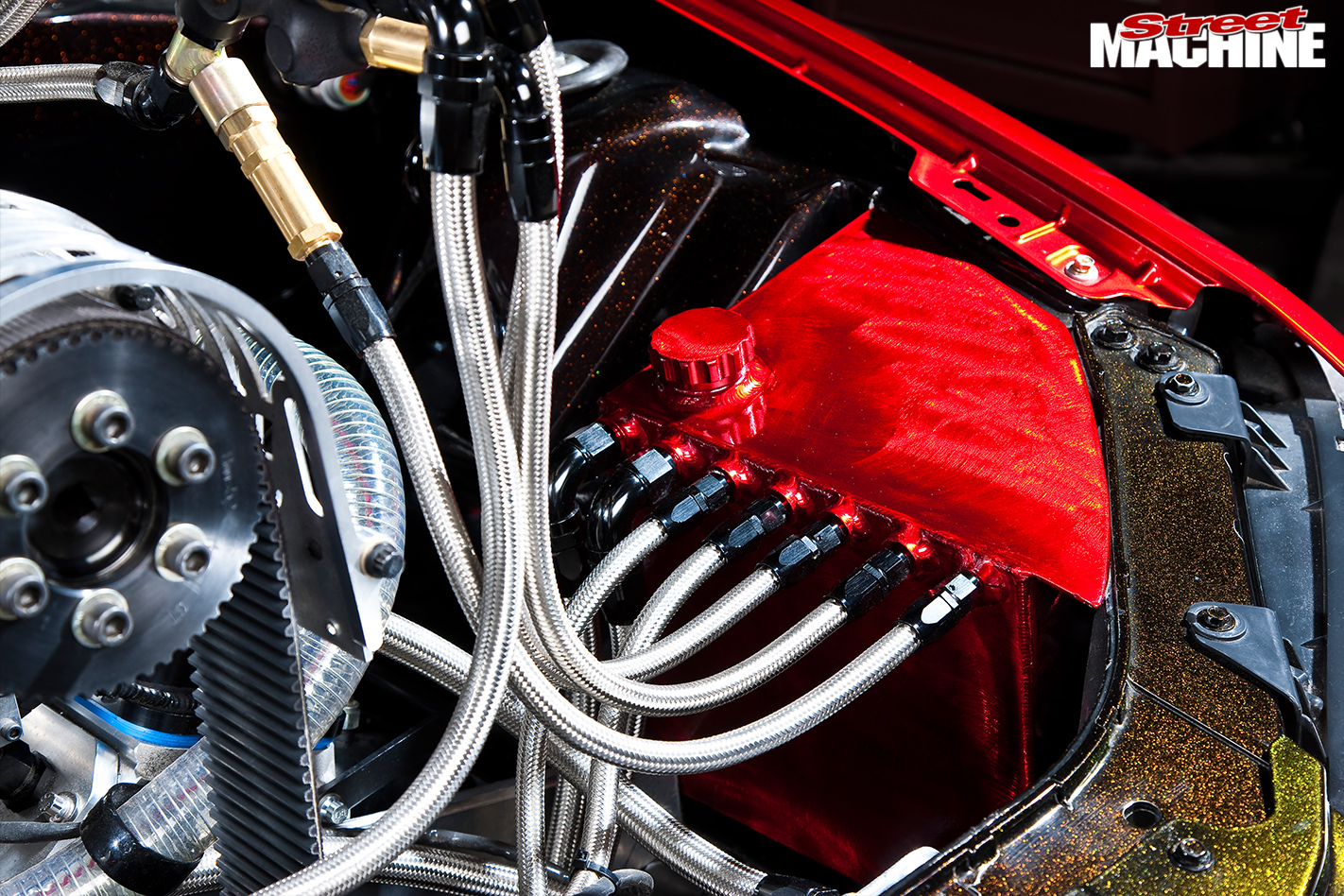 He was thrashing to get the car finished in time for Gazzanats 2014, and to make matters worse he also had the motor out of WONAGO during that time, but impressively enough, both cars made the show. From go to whoa the wagon took just 12 months to build.

“There were no real dramas at all,” says Justen. “I’ve built a few cars now, and if you plan it right, get involved with good people and communicate well with them, it all comes together.” 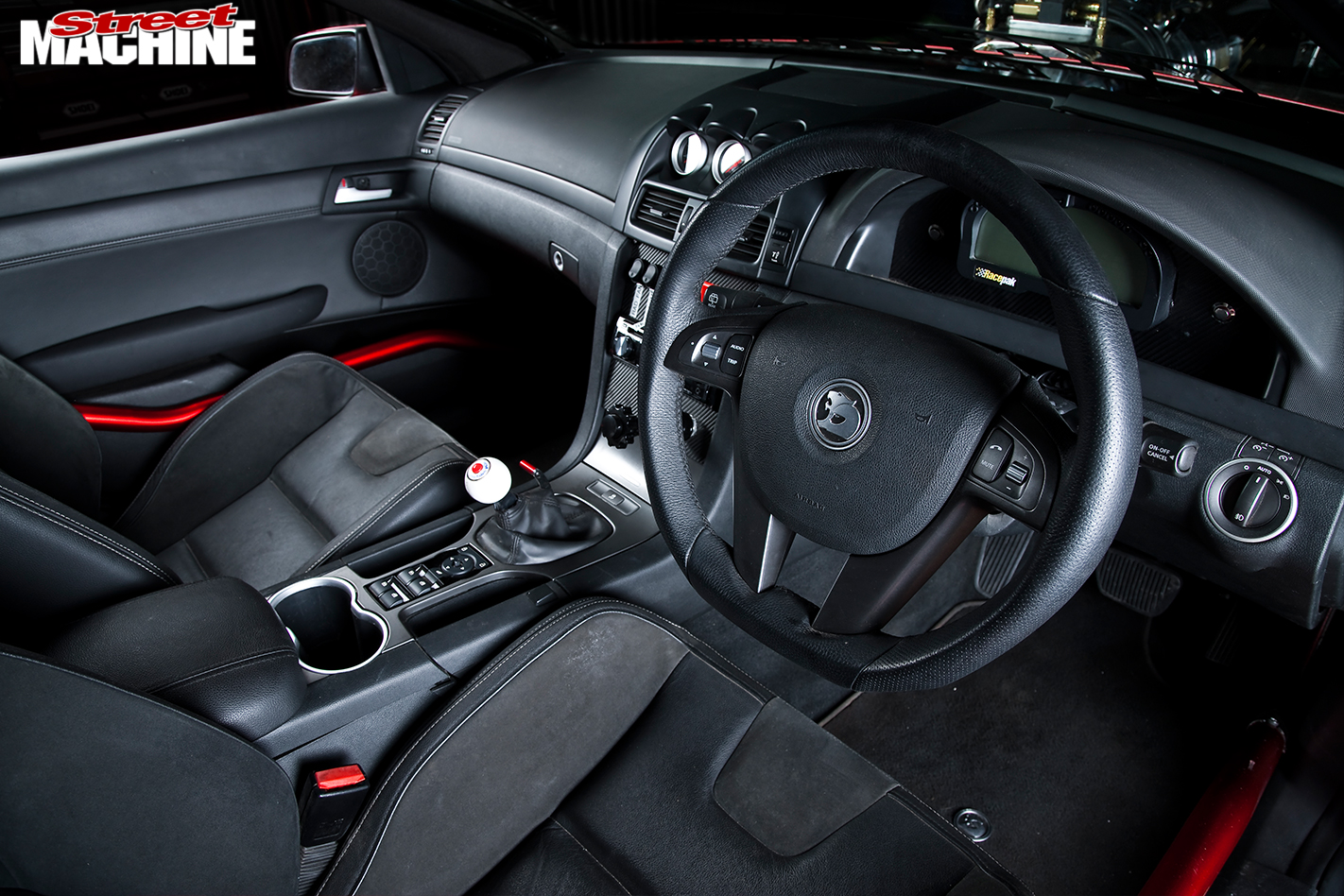 Mechanically, the wagon isn’t too dissimilar to the ute – a tough 377ci small-block combo with CP Pistons, Oliver rods and a Crower crank, topped by Brodix heads, an 8/71 Littlefield blower and an Enderle hat. It’s good for around 1500hp, so it’s little wonder it had no problems dusting tyres at Gazzanats. It’s backed by a B&M Powerglide with a 4000rpm FTC converter and a sheet-metal nine-inch with Strange axles and 3.0:1 gears.

Coil-overs at all four corners grant the wagon improved handling to complement the ton of grunt available, and the epically proportioned six-piston front and four-piston rear HSV anchors do a superb job of slowing the beast. 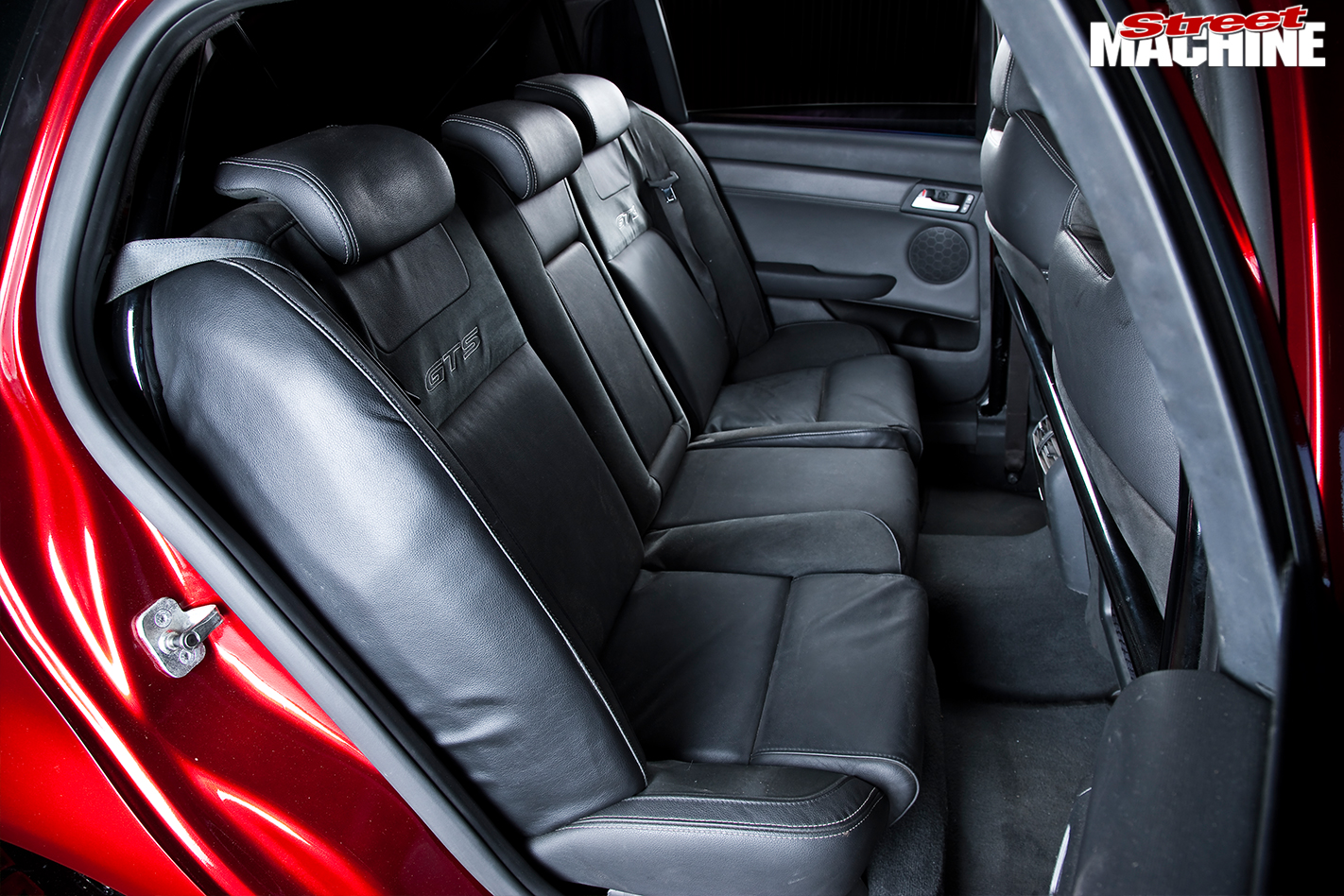 And what better way to deck out the interior of a late-model Commodore than with more HSV finery? Front seats were lifted straight from a VE GTS, while the rear had to be modified to suit the wagon’s tubs by Canning Motor Trimmers. It all looks very comfortable, contemporary and refined, but the ’cage, the Racepak dash, B&M shifter and Auto Meter instruments make for a racy edge.

With WONAGO being such a popular fixture on the skid scene, comparisons between it and Justen’s new ride are inevitable. 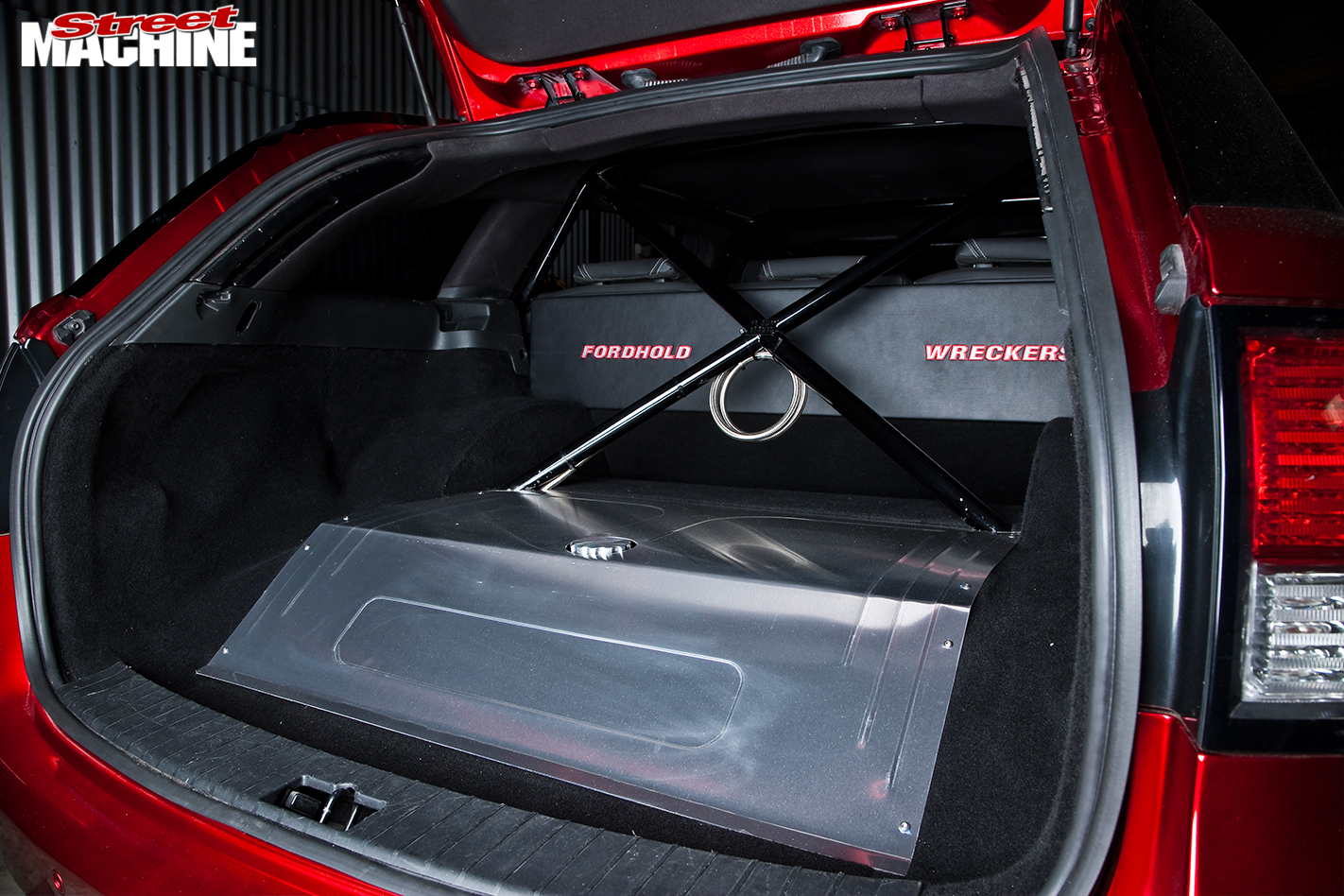 “I’m looking forward to showing the wagon and I want to try and do that before I wreck it,” Justen laughs. “It won Best Engineered and third Top Paint on debut at Gazzanats, so that was a good start. We’ve got the WA Hotrod Show coming up over here, and if I do well at that I wouldn’t mind doing MotorEx, too.” But Justen’s aspirations with the new car don’t just centre on trophy-hunting.

“Next season I’d really like to run it down the quarter, and that’s something I was never able to do with the ute because it doesn’t have a ’cage. I’m hoping for high-eights; my engine-builder George had the same combo in an HZ ute, which ran 8.60. This car is roughly the same length and a similar weight, so I can’t wait to race it. 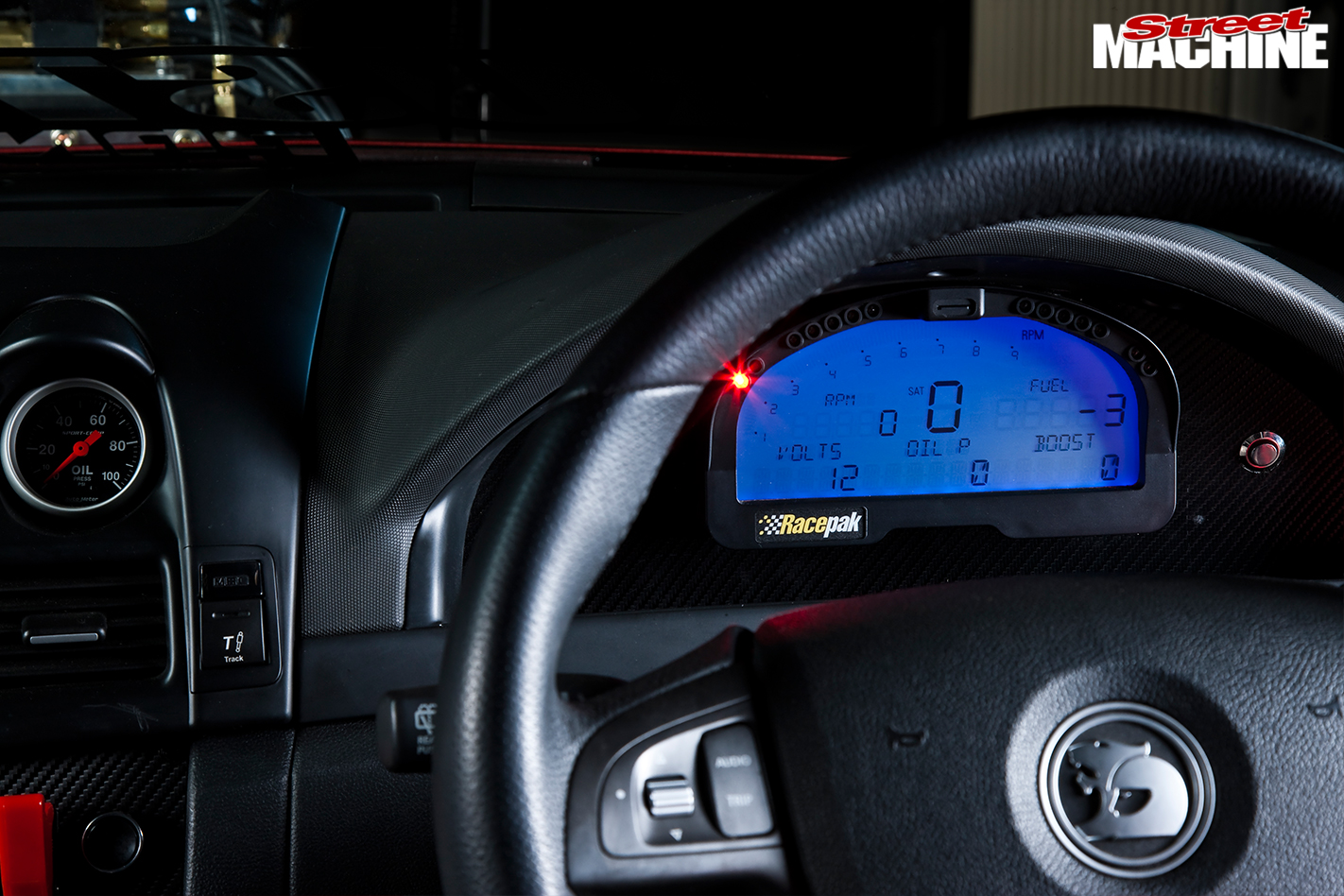 “I also love that I can take more people out in it. We were cruising five-up in it at Gazzanats doing skids – it was cool!”

All that talk begs the question – is Justen ready to part ways with his iconic WONAGO ute? “Nah, I’ve had some crazy offers to buy it, but it’s not going anywhere; it’s part of the family.”

Spoken like a bloke who understands that two blown burnout beasts are better than one.