This VH Vacationer is no longer on holiday; it’s been transformed from a humble 202-powered cruiser into a mental nine-second streeter

This mean green flying machine is little more than a green blur on the road.

This article was originally published in the October 2016 issue of Street Machine.

One of the attractions of early Commodores is that you can still find absolute gems hiding in sheds that cost bugger-all to buy. Michael Lobie nabbed his VH as a neat six-pot cruiser. “It was a VH Vacationer that was a really neat old country car,” Mick says. “In fact it was full grandpa spec, with a stock 202 and even a working stock radio! The guy I bought it off was the second or third owner; it was blue and still had all the Vacationer stripes and everything.”

Mick is the first to admit the VH was never supposed to be the 760rwhp, 9.5-second, show-winning monster it is now. The 32-year-old Queenslander was originally putting it together for a life of tyre-bashing.

“I only drove it around the block before we stripped it for the build,” he says. “Seth, my eldest son, who was six years old at the time, helped me strip it down.” 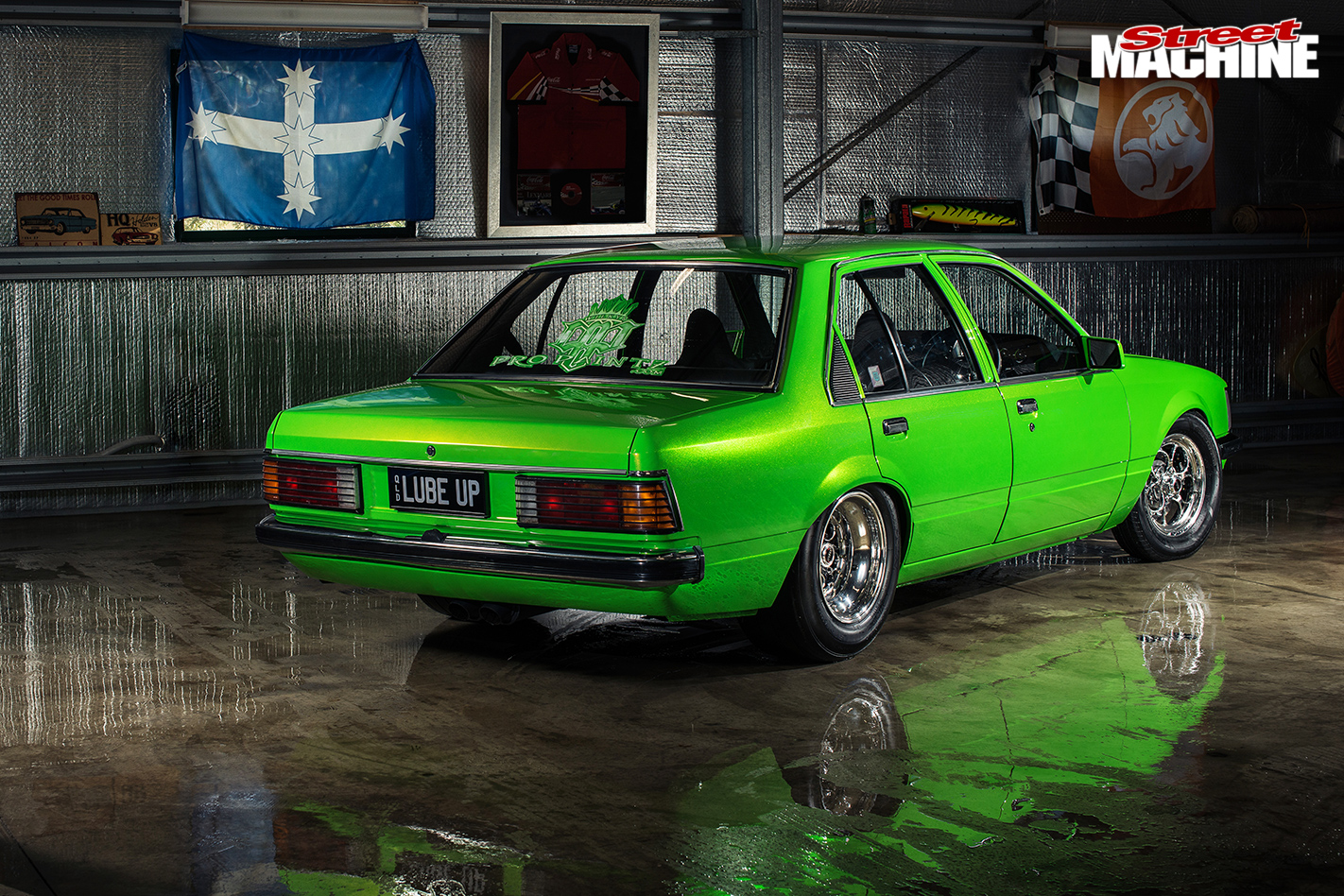 The body was then taken straight over to Jason at Wilky’s Pro Paintz on Queensland’s Sunshine Coast, to get it into shape for smashing tyres. Jason got the scalpel out, shaving the fuel cap, windscreen washer jets and wipers, smoothing the engine bay and adding some mini-tubs under the rear end to swallow a decent amount of rubber.

“When we got it back home it took about one year for me to piece it all back together, as I replaced every single nut and bolt,” Mick says. “The first few steps of painting it and getting the tubs done all happened pretty fast, around four months, but then it sat around for about a year while I was waiting for time and money to catch up.”

It was then that fate – in the shape of an HQ Monaro – intervened. 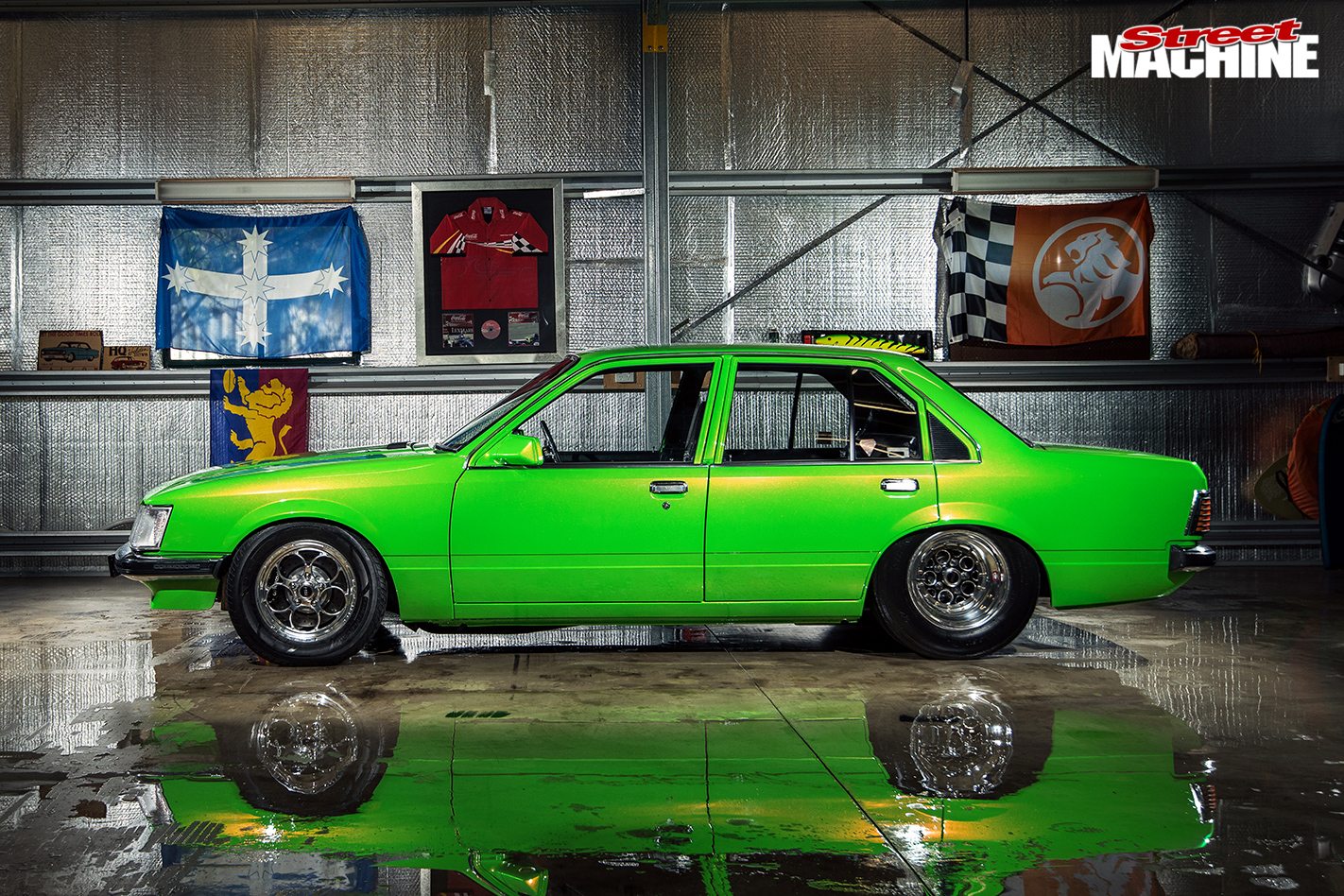 “An HQ popped up, so I decided to buy that as my next project,” Mick explains. “So instead of making the VH into a burnout car, I decided to take the engine, turbo and ’box out of an LQ9-powered VR Commodore I had and use those in the VH to make it into a streeter.

“But I had another LQ9 motor going together at that time and we ended up putting that one in the car instead. We had bought a new block and ordered everything for it, because the VH was originally going to be a burnout car; we spent up on it to ensure it would hang together. You can’t beat the bang-for-buck you get with LS engines.”

While the LQ9 is known for being the pick of the production-car LS motors for handling boost, that doesn’t mean they’re indestructible. With that in mind, Matt Smith from Just Autos stuffed the donk full of forged internals so it could handle four-figure power outputs, including a Callies DragonSlayer crank and Compstar rods, CP Bullet Series pistons, a custom-ground cam and Morel tie-bar lifters, with a Moroso high-volume oil pump and VCM sump baffle plate thrown in for further safeguarding. 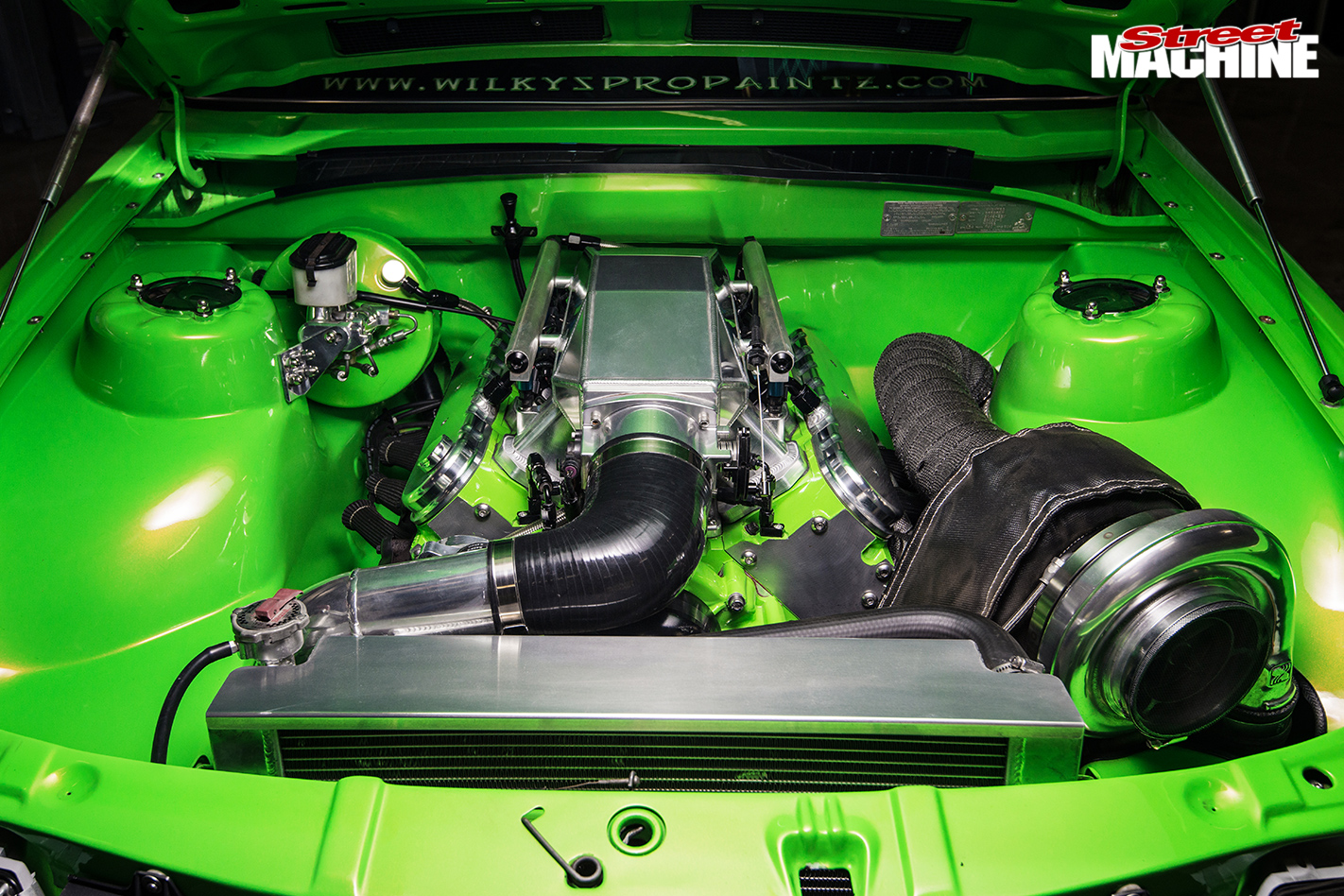 Deep-breathing LS3 rectangular-port heads were used up top, with custom valve springs and Comp Cams pushrods, topped by a Shaun’s Custom Alloy intake manifold that has been kitted out with E85-guzzling 2200cc injectors and a 102mm throttlebody. E85 is supplied from a Holley Dominator 1800 pump, while a remapped VY Commodore ECU sends spark from the relocated coils down MSD leads, and a custom alloy radiator keeps the motor from steaming up.

Boost from the big single BorgWarner S488 turbo is kept from going crazy by the Turbosmart 60mm wastegate and eBoost2 electronic boost controller.

The 408ci combo recorded a best of 760hp at the treads. Such big numbers meant Mick couldn’t scrimp on the driveline, so he spent solid money to ensure nothing would be turned into a metal pretzel. The puffer-fed LS turns a 3500rpm Dominator converter, manualised and transbrake-equipped Powerglide, custom two-piece Hardy Spicer tailshaft and a sheet-metal nine-inch rocking 31-spline axles and a full spool. 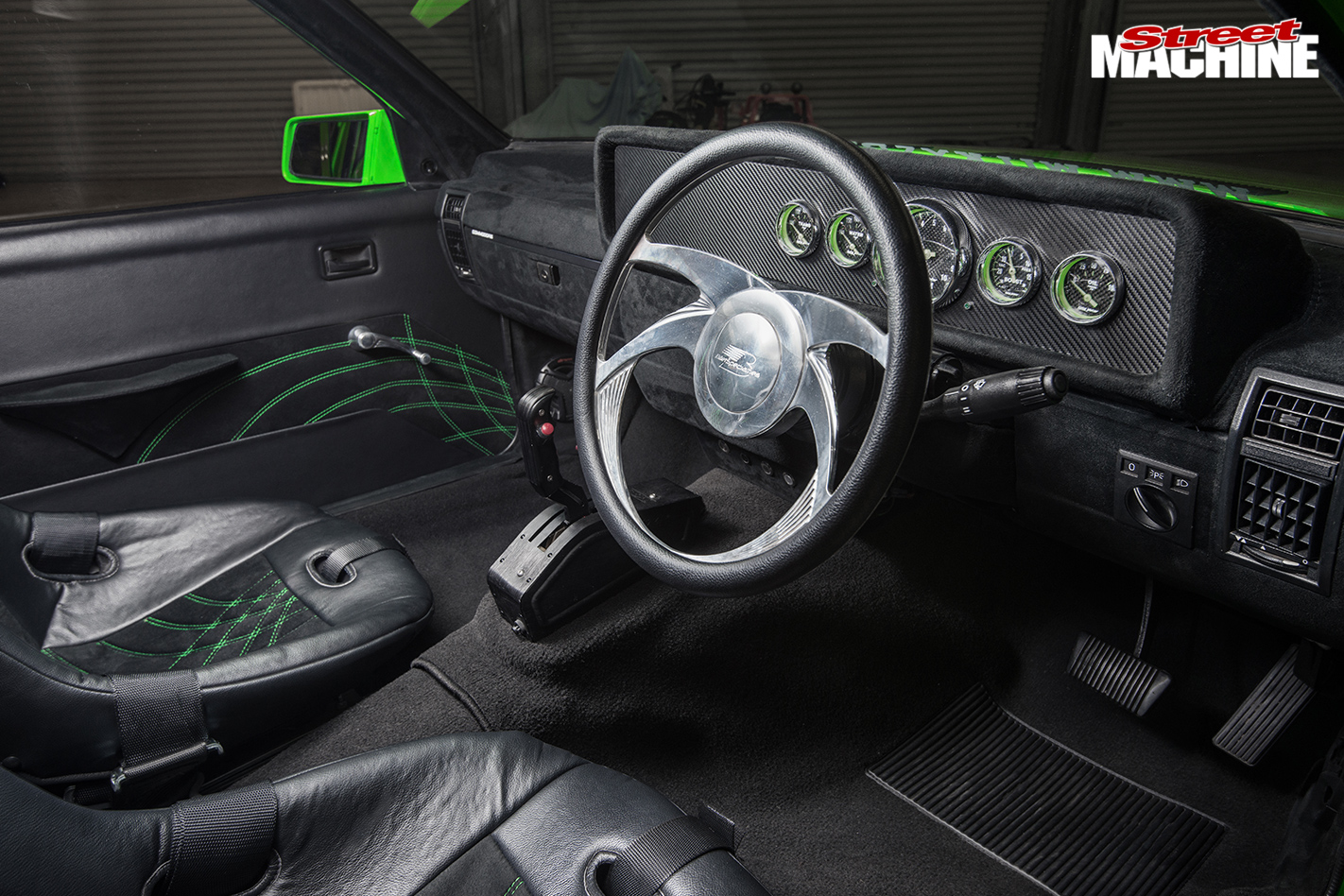 The diff is a shorty thanks to Mick running 15x10-inch Weld Magnums under the VH’s mini-tubbed rear guards, with 15x3.5 Weld Magnum front-runners used on the steering end. He chose Pedders shocks and Super Low King Springs up front and QA1 coilovers out back, with adjustable upper control arms and tube lower arms to stop the diff twisting up under hard launches, while Wilwood disc brakes do a better job of hauling the small sedan up than the 1983-spec originals.

It’s a fantastically well-sorted package that combines street, show and track. Mick has backed up the car’s impressive dyno numbers by running a PB of 9.52@151.7mph, but he isn’t done with it just yet. 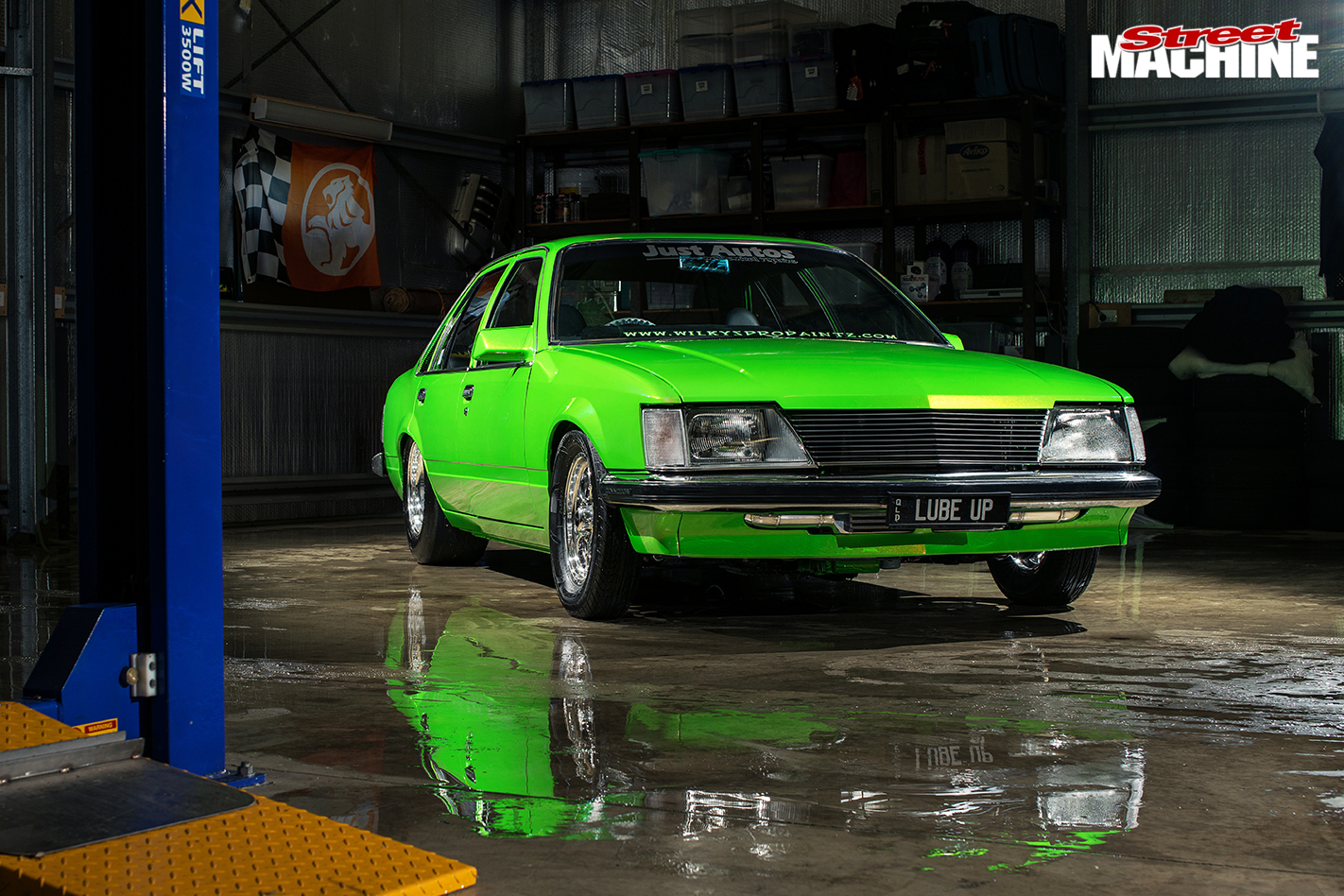 “At the moment I’m pretty happy how it is, although doing nines at 150mph without a ’cage is a bit sketchy,” he laughs. He has plans to remedy this after he’s enjoyed cruising the VH. “Right now I can put my wife and kids in it and we can go to dinner no worries, but towards the end of next year I’ll get it tech-certified and put a ’cage in it, wind the boost up and aim for the eights.”

But what happened to that HQ? “It’s now my wife’s car,” Mick says. “It’s pretty neat but still needs some work like a respray and tidy-up, so we’ll get into that one next.”