This article on Bobby's coupe was originally published in issue no.17 of Street Machine's Hot Rod magazine

BOBBY Green is a tough guy to nail down, and when you ask him what he does for a crust, it’s a fairly lengthy reply: “The core of what I do for a living is, I’m a designer. I design a lot of different stuff — I do car design. I have a shop in Burbank called The Old Crow Speed Shop, it’s more of an excessive hobby than a living, but I’m there quite a lot. In between that, I’m in the bar business. I build, design bars, restaurants, clubs, mostly around Los Angeles — I have a great time doing that. And then I’m a part of The Race Of Gentlemen.” 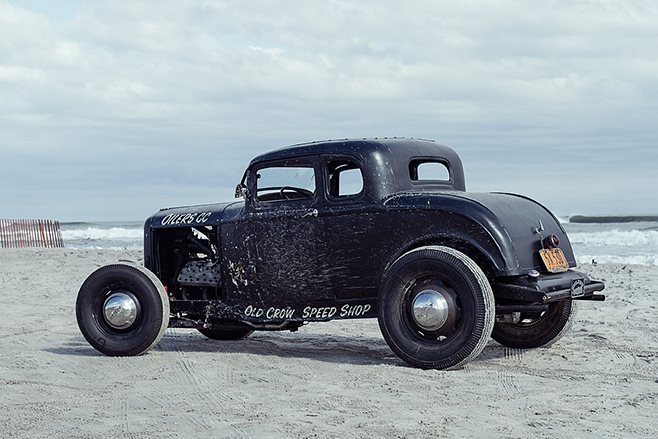 Of course, if you’re a regular reader of SM Hot Rod, you’ll be more than familiar with TROG as we covered it extensively in SMHR 15. For those of you unfamiliar, TROG harks back to the immediate post-war era when race tracks or even straight roads weren’t readily accessible, so they raced on the beach instead. The only cars allowed to race are period correct, which doesn’t just mean they have to be styled like a late-40s or early-50s hot rod, they have to have all the right bits on them too. 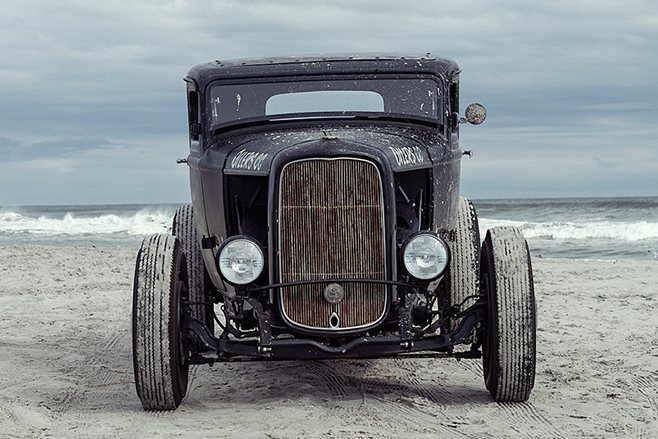 As it states in the rule book: “Automobile specs are quite self explanatory; pre-1935 bodies, pre-1953 parts only, bangers and flatheads only.” So, as a part owner — with Mel Stultz — of the event, it’s no surprise that Bobby’s ’32 meets the criteria to a tee. What’s the point in putting in all this effort and work to create an event if you can’t race at it yourself? 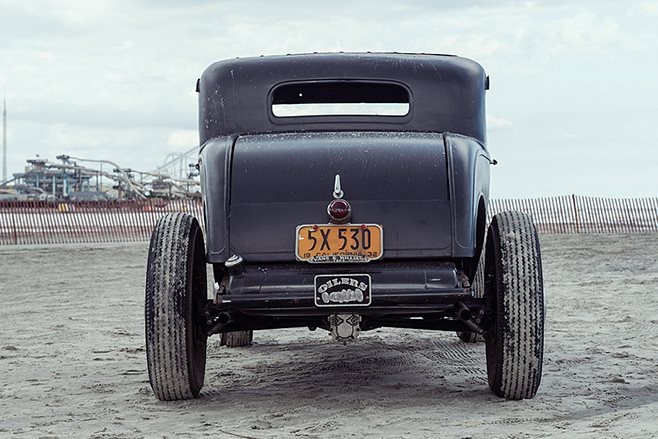 Bobby is a bit of a fan of all things vintage, even the bars he runs (check out 1933group.com) are all styled in a post-prohibition theme with the furnishings and fit outs all true to the era. He’s amassed quite a collection of cool old stuff — and not just hot rod parts — from years of scrounging at swap meets, although one thing he figured he’d never be able to afford was a genuine ’32 Ford. 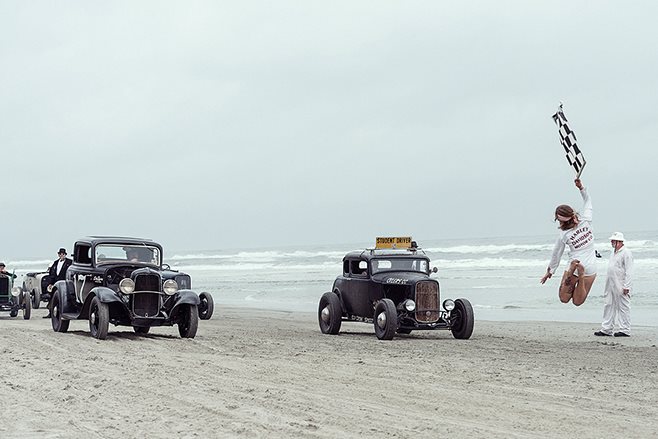 “At the time I bought it, there was no way I could ever afford a ’32 Ford, they were just out of my price range and I was talking to a guy up in Canada — Victoria Island — and he said: ‘You know what, I know this old timer and he’s got a ’32. It’s an old dirt track, you know roundy-round car, it’s real beat up.’ A buddy and I drove straight up to Victoria Island, got there, and yes it was rough, but it was a cool car. The body was sitting on a ’49 Ford truck chassis, so there was nothing on the chassis we wanted. We just took the body, put it on the truck and headed home,” Bobby recalls. 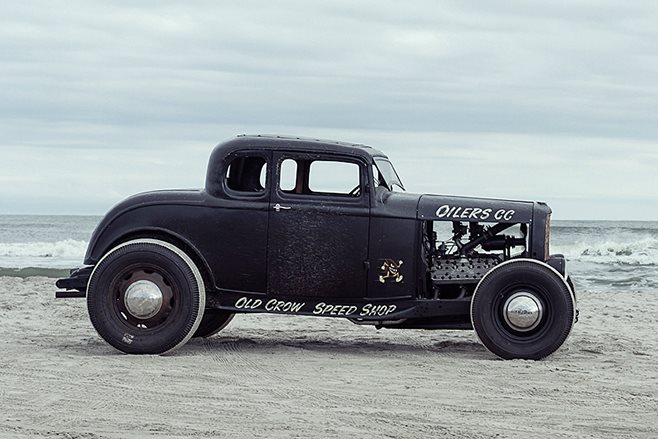 The body was pretty rough and took a fair bit of massaging by Logan Davis to get it looking this good. The brushed on Rustoleum created the perfect base for Rich Garcia's awesome sign work

And how much did he pay for this beat up but all Henry Ford steel five-window? The princely sum of 1500 bucks. That may well sound like the bargain of the century, but as we all know, you get what you pay for and it took a fair bit more time, money and effort to get the car looking how it is today: “We spent about three years patching, piecing, hammering, torching, shrinking, trying to get it to where it is now. She’s pretty good now.” 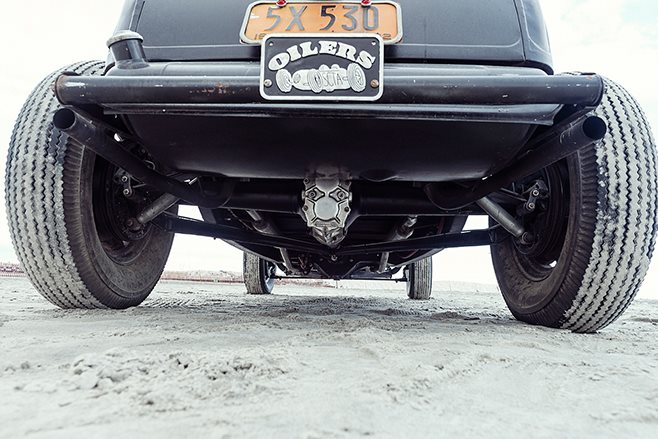 It probably won’t win any trophies at the Grand National Roadster Show, especially not covered in beach sand and salt water like it is in the photos, but what it lacks in shiny paint and chrome — which is nothing, by the way — it makes up for attitude and the knowledge that many of the parts, while not perfect to look at, have all got a story to tell. 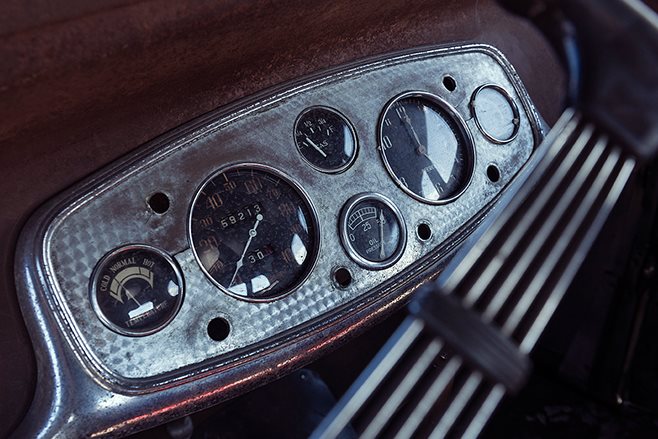 One of the most interesting pieces that Bobby managed to collect over the years was the Pierce Arrow instrument cluster, including the original speedo (with odometer) and clock. The accessory gauges are a mix match of vintage hardware that look right at home in the well weathered housing with barely discernible machine turning. 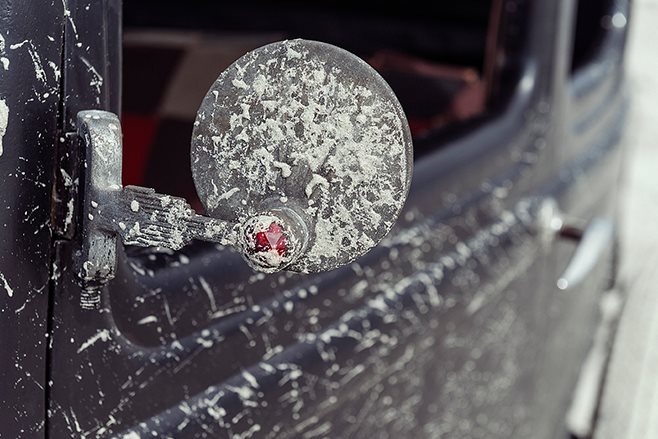 The car is full of little touches like that, pieces that probably spent decades on someone’s shelf, or tucked into a box in the back shed. Check out that side mirror, it’s not your regular peep mirror that clamps to the frame, it mounts on the hinge with an art deco inspired stalk capped with a red jewel. Not sure if that’s an early attempt at safety or it just looked cool — I’ll go with looked cool. 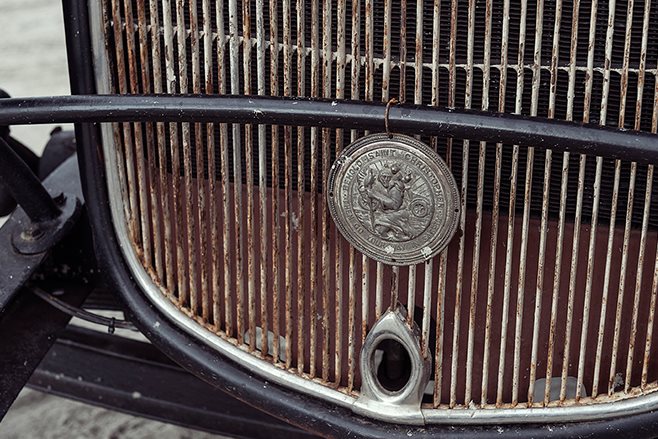 How about that little medal wired to the light bar — Behold Saint Christopher then go your way in safety — it reads, which is about all the safety precautions you can expect on a car built to emulate the hot rods of the late-40s. No belts, no brakes, no problem, St. Christopher will look after you! Even the fact that the grille insert appears to be wearing what’s left of the original dove grey paint is amazing in itself. 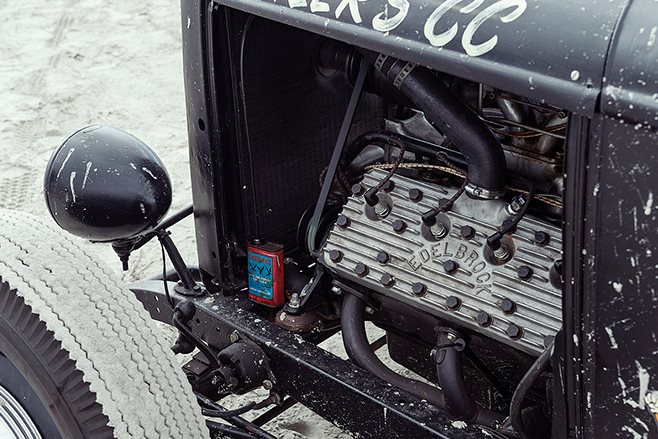 The centrally mounted accessory tail-light, original 1932 California plate, and of course, the Culver City Halibrand quickchange. There’s nothing on this car that looks out of place, even the overflow can is just that, a can. A can that once held ‘Crow-Fez’, a bird and rodent expeller. 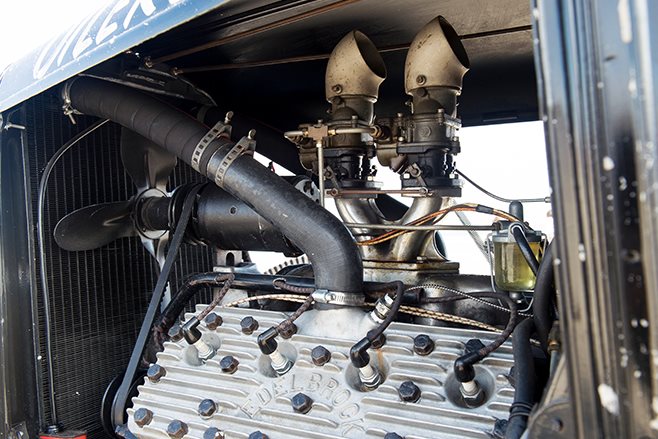 No doubt a can that sat unloved and ignored for many years before Bobby came along and saw it as the perfect match for his Old Crow Speed Shop coupe. Obviously whatever was in that can is long gone, because this coupe looks like it’ll be hanging around for a while. 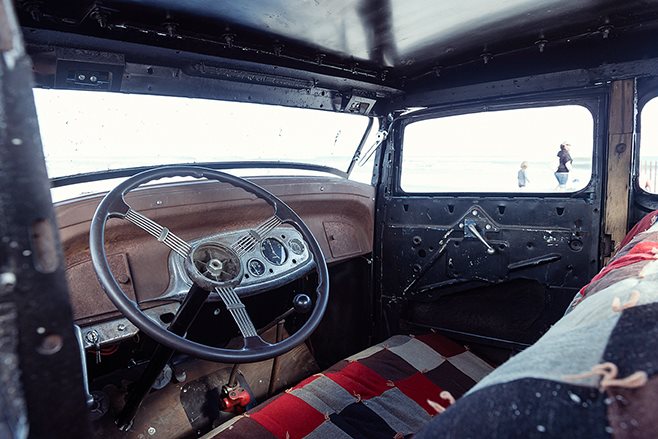