Some 17 years ago, John Dwyer purchased this HQ ute from a caravan park on the flood plains of the mighty Murrumbidgee River in his hometown of Narrandera. As he removed chunks of river mud from the Quey’s rusty inner sills that day, he had no idea what he’d let himself in for.

This article was originally published in the November 2016 issue of Street Machine.

He had no way of knowing that it would take so long for the ute to again see the light of day, or that it would be finished to such an exacting standard that it would debut at Australia’s premier indoor show, in the company of the finest show cars in the land. That being said, John is quick to insist that it is every inch a street car, and despite the ute’s flawless presentation, its street credentials are obvious. The quad Weber-fed 350ci small-block is plenty tough, but it’s also perfectly driveable, and fits neatly beneath the bonnet. The choice of rolling stock is striking yet sensible at 18 inches in diameter, and the undercarriage is painted in durable stone guard, with most under-car components powdercoated to resist stone chips and make cleaning a cinch. It’s built to drive, and once he’s got a few shows under his belt, that’s exactly what John intends to do with it.

“I started out building it with my dad, but we got screwed around by a couple of different shops who led me astray and gave me bad information,” John explains. “Then I met Greg Maskell. It was years ago, when he was helping Gary Myers build the Silver Bullet, and things kicked off from there.” 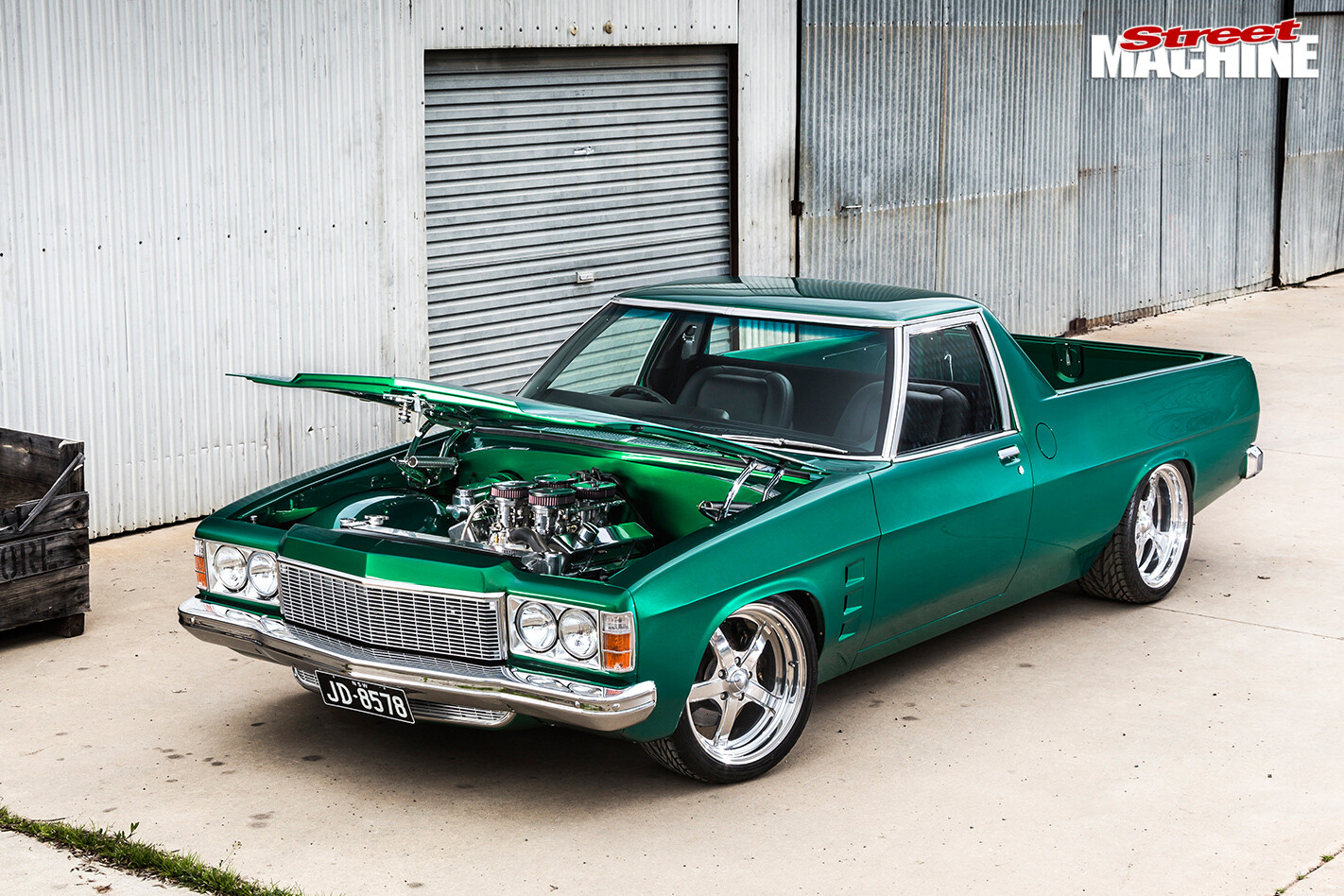 John knew full well that the ute had endured a tough life at the hands of its previous owners, but it was only when the paint came off that the full extent of the damage was realised. The firewall and tray were both riddled with bastard rust, but with plans for a fabricated tray area and flat firewall, the show went on regardless.

John had already sourced most of the parts for the build, including the motor and driveline. “Being an HQ it had to have a Chev in it,” he says. “I had it built by my mechanic in Wagga, and the bottom end is pretty much sprint-car spec, so it had to have Webers on top.”

With a Scat crank, H-beam rods, forged SRP pistons and a custom-grind solid cam, the little 350-cuber is built to be wailed on. A pair of CNC-ported Edelbrock alloy heads were used up top, along with the aforementioned quartet of Weber carbs, which look just plain cool. “I spent years at the ’Nats looking at different set-ups, and I knew I wanted it under the bonnet because I didn’t want hassles with the police,” John says. “It should have a good induction sound, and if it makes 500hp I’ll be happy. I wasn’t chasing numbers; I just wanted it to be a nice cruiser that’s got a bit of stick. For me, it’s all about the Webers!”

Maskell’s Customs & Classics in Shepparton handled the build from start to finish, and when you consider that their back catalogue includes such masterpieces as Chris Bitmead’s XBOSS Falcon hardtop, Leisa Chinnock’s PSYCO XF Falcon, and Karen Keves’s Mission Impossible HQ Monaro, the quality of the finished product suddenly makes perfect sense. 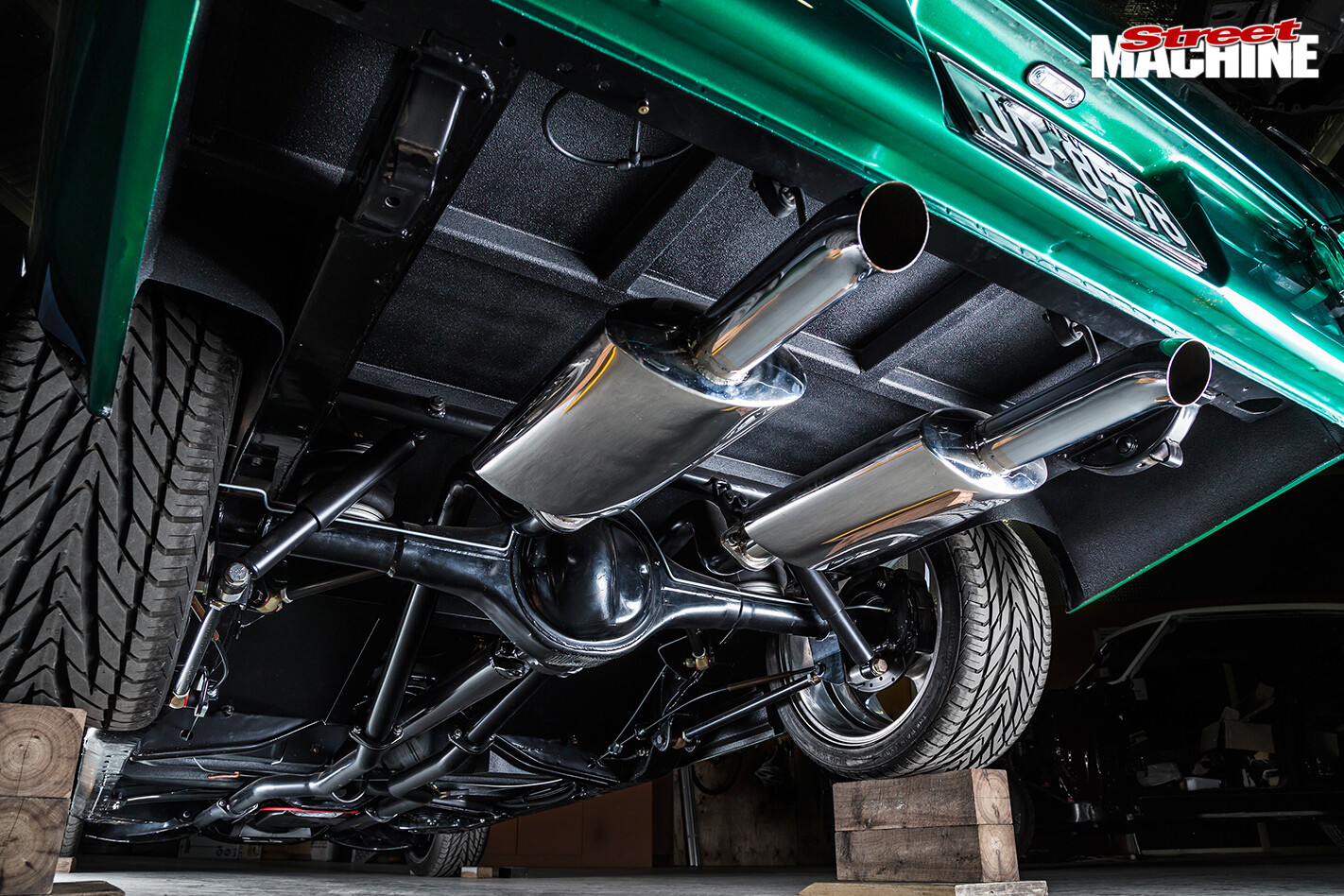 Greg suggested ditching the leaf springs in favour of a custom triangulated four-link and airbags for improved ride quality and a ground-hugging stance. While the ute is still yet to move under its own steam, we wouldn’t mind betting that it drives a lot better than it ever did with the old horse-and-cart rear suspension. Koni shocks all ’round are matched with Pedders coil springs and drop spindles up front, while brakes are discs at all four corners, with monster 330mm rotors and six-piston calipers at the pointy end.

The old ute’s bodywork also came in for serious attention, over and above the obligatory rust repairs. A custom flat firewall was whipped up, along with smoothed inner fenders, twin fuel fillers, GTS guards and a twin-headlight front end. Of particular note is the tray area, which is a real highlight of the car. The floor is flat, with a recessed rear firewall and smoothed wheel tubs. “The tray was something I saw in a magazine 30 years ago, and I said: ‘Righto, I want that,’” John says. “It was one of the aspects of the build that I got screwed around on at the start, but it was the number one thing that I wanted on the car. I wanted to get rid of the ribs and smooth the whole thing from top to bottom. All the globes are still accessible through the side panels, and it’s kept a bit of the original Holden character in that way.” The paint is beautifully applied, and Standox Poison Ivy in colour. Suffice to say the ute wears it well. 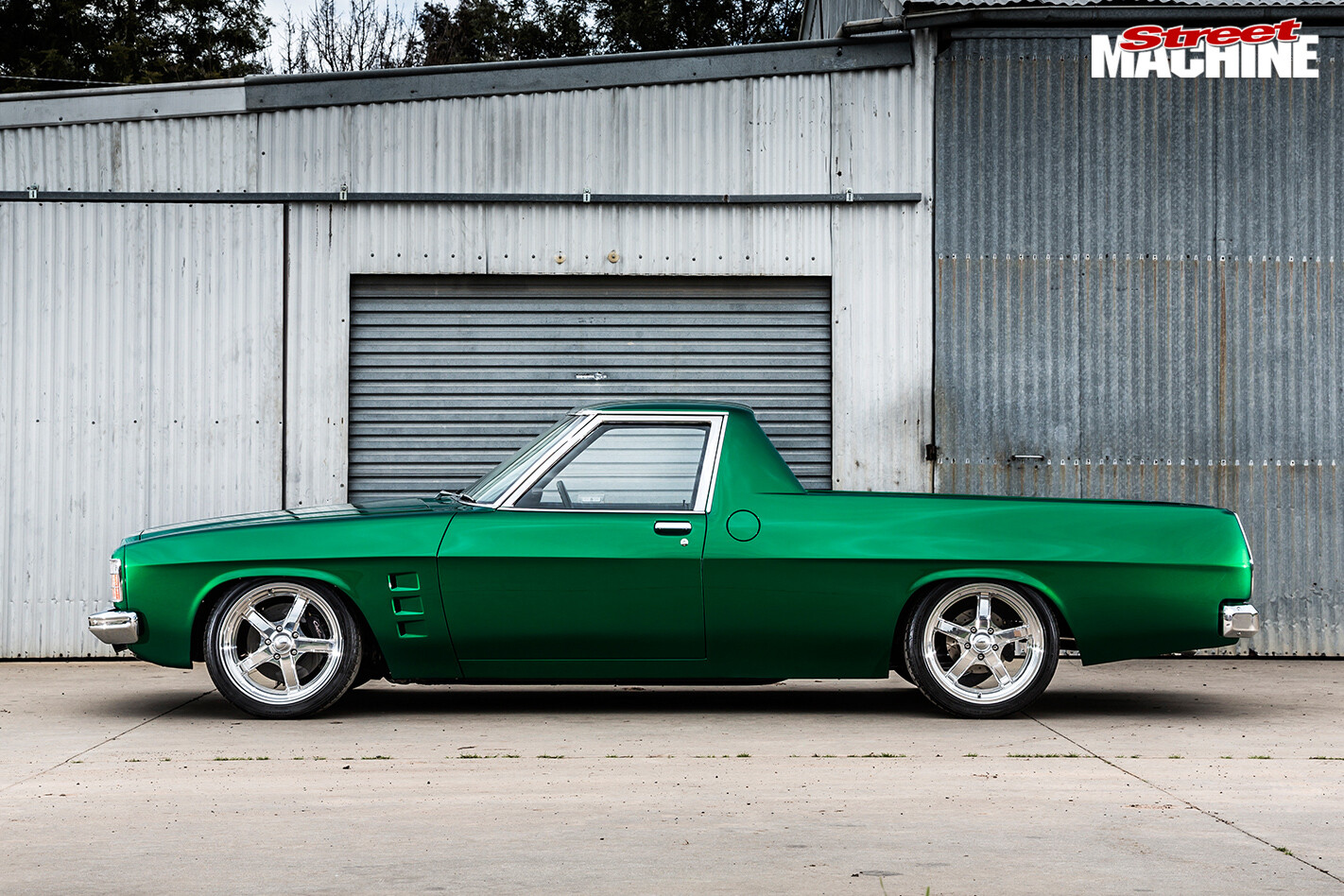 The interior fell into place fairly late in the build, and was only completed two weeks before the car’s debut at MotorEx 2016. “I talked about some different ideas with Greg, and it had to have a GTS dash in it,” John says. “I didn’t like the HQ indicator stalk, so he put an HZ column in it but kept the original headlight dipper switch on the floor. I wanted electric seats, so they’re out of a VX Calais, re-trimmed in leather. I’m not interested in putting a stereo in it; I’ve found an original in-fill panel to blank off the hole for it!”

The first time John laid eyes on the finished product was when it was set up at MotorEx in all its glory. “I wasn’t far off tears!” he says. “I was a bit freaked out; I was so rapt that something that started out so rough had turned out so awesome. I stood there for an hour or so and just enjoyed looking at it. I was blown away. 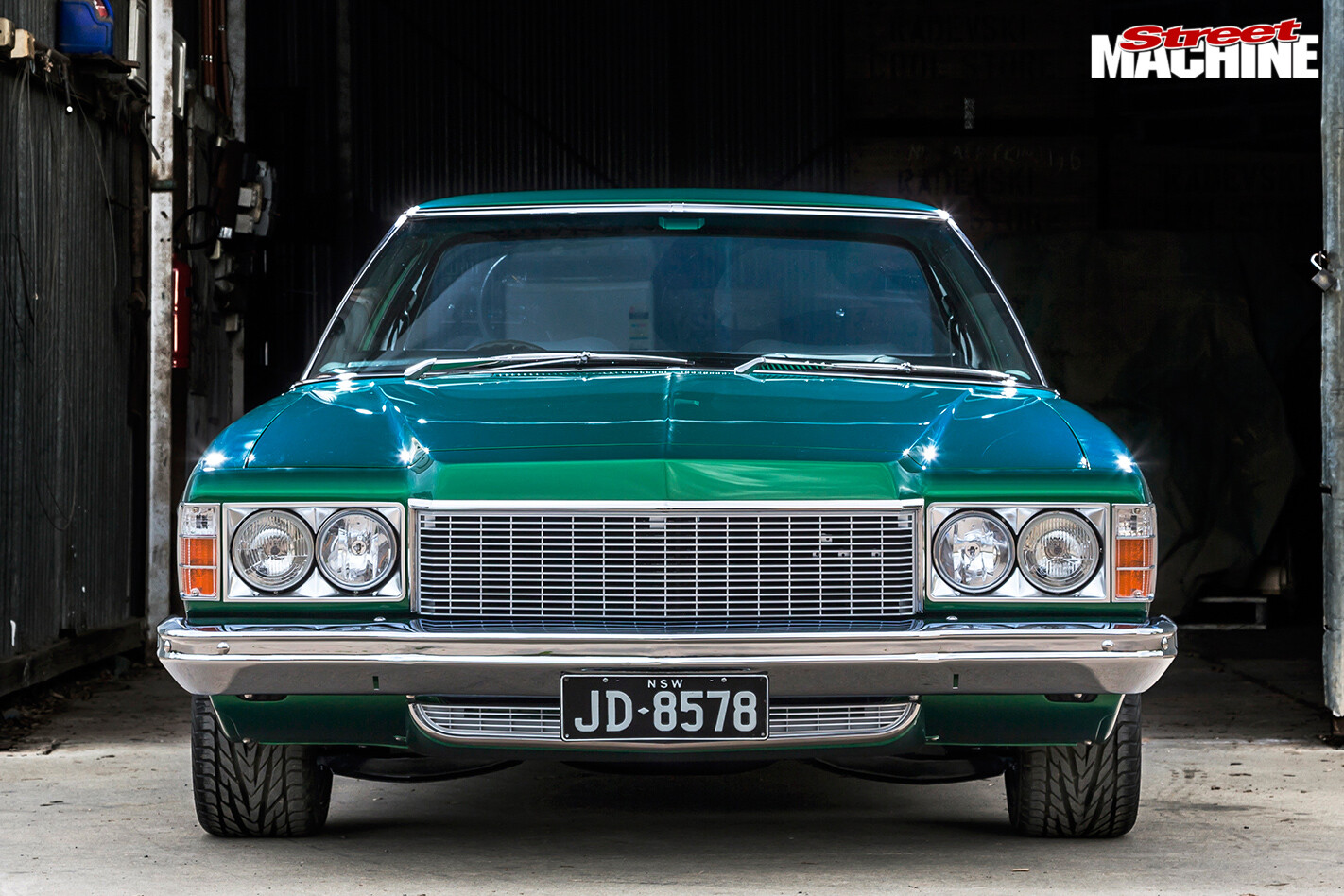 “I can’t wait to drive it, and we’ve started the engineering process, so it will be 100 per cent registered and legal,” he continues. “I’m just going to take it out on Sundays and enjoy it with the kids and the family. It hasn’t got big oversized rims or crazy interior trends that will date. It’s all sort of classy and timeless – just how I wanted it.”