It took GM-H 42 years to come up with the Maloo; Peter Woolven tried to right that wrong by building the V8-powered EK ute Holden should have made back in 1962

AS WE walk the dusty driveway to his property, an hour south of Perth, Peter Woolven tells me how it all began. “I had the vision that if they had me as a design engineer at Holden in 1962, putting together a Maloo...” He pauses as he throws open the door to his sizeable shed: “...this would be my version.” 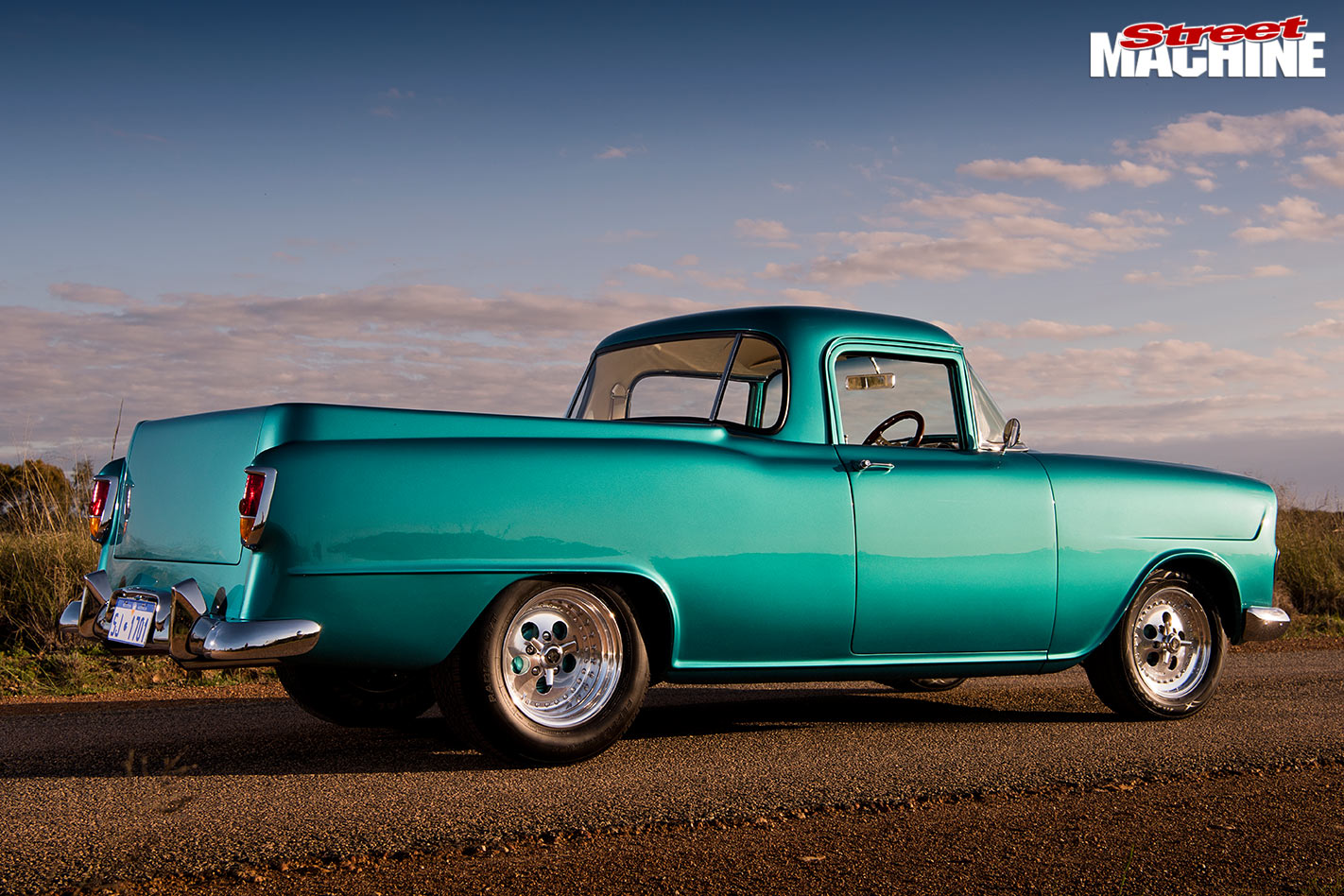 Peter made a new tailgate from scratch, creating his own hidden hinges while he was there

The theatrics are warranted; Peter’s EK ute sits spotless and gunbarrel-straight amongst the tractors and dirt bikes, Polynesian Green metallic paint glimmering beneath a shard of vibrant afternoon sun. Nose toward us, bonnet up, chrome grille throwing sparks of light to every corner of the shed like a disco ball. 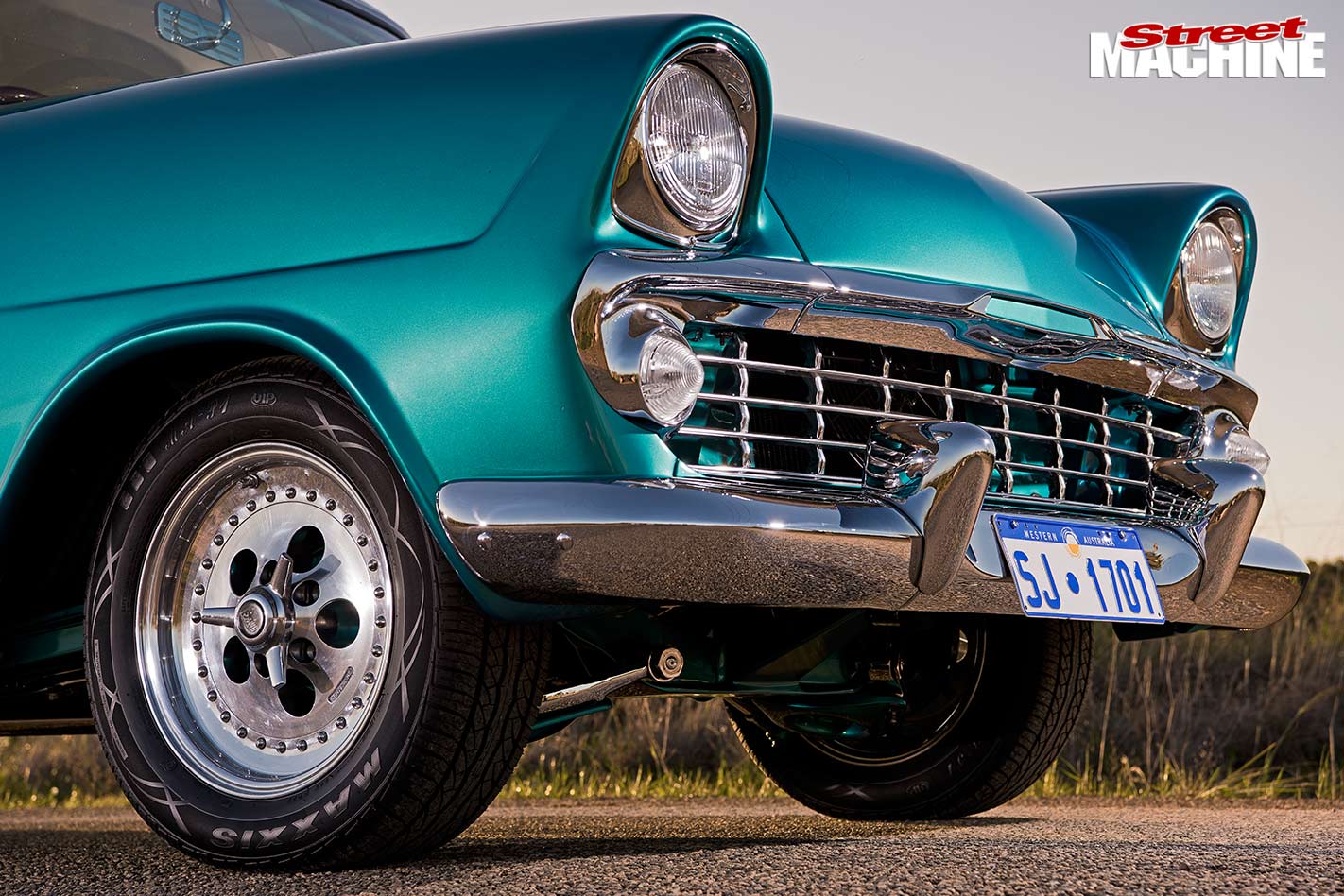 Of course, the EK didn’t always look like this; it took 10 years to get the ute to fulfil Peter’s prophecy of a pre-HSV V8 hay-hauler.

“I paid 400 bucks for it and pulled it out of a paddock,” he says as we circle the now-immaculate machine. “When we put it on the car trailer, the front bumper just fell off!” 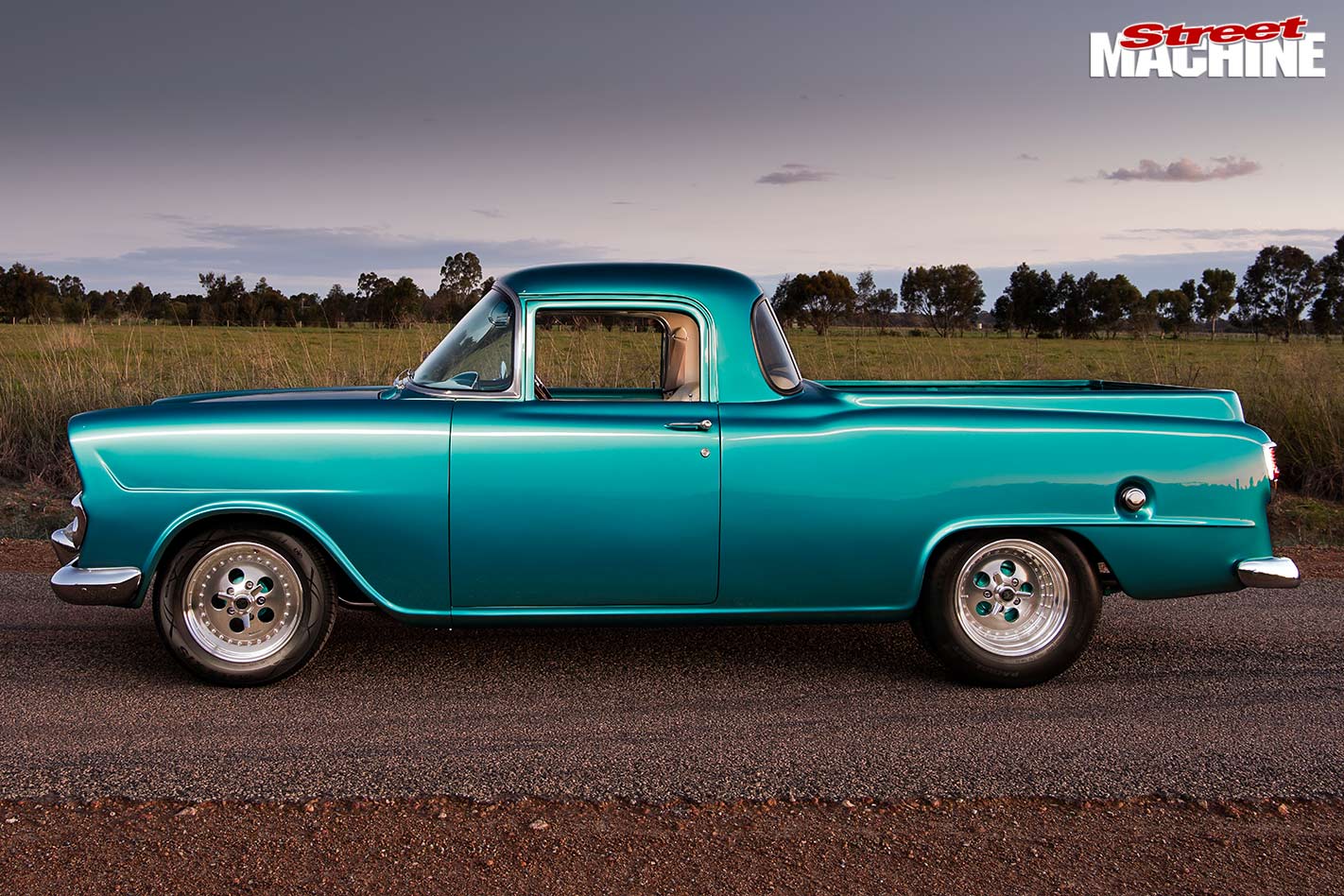 Observant individuals will notice the lack of quarter vents. “I got new side windows made; they sit in Ford Laser window regulators and run-in channels I made myself,” Peter says. The mods have allowed him to fit power windows, just like a luxury ute should have, and the cost wasn’t as crazy as you’d think. “It cost me something like 50 bucks for both windows! I thought: Er, are you sure?”

The subframe wasn’t the only issue; the tray, floors and tailgate were all crunchy oxide. “It looked okay on top, but I now know why the previous bloke thought it was too far gone,” Peter admits. “Still, I thought I’d give it a tackle and learn on my journey.” 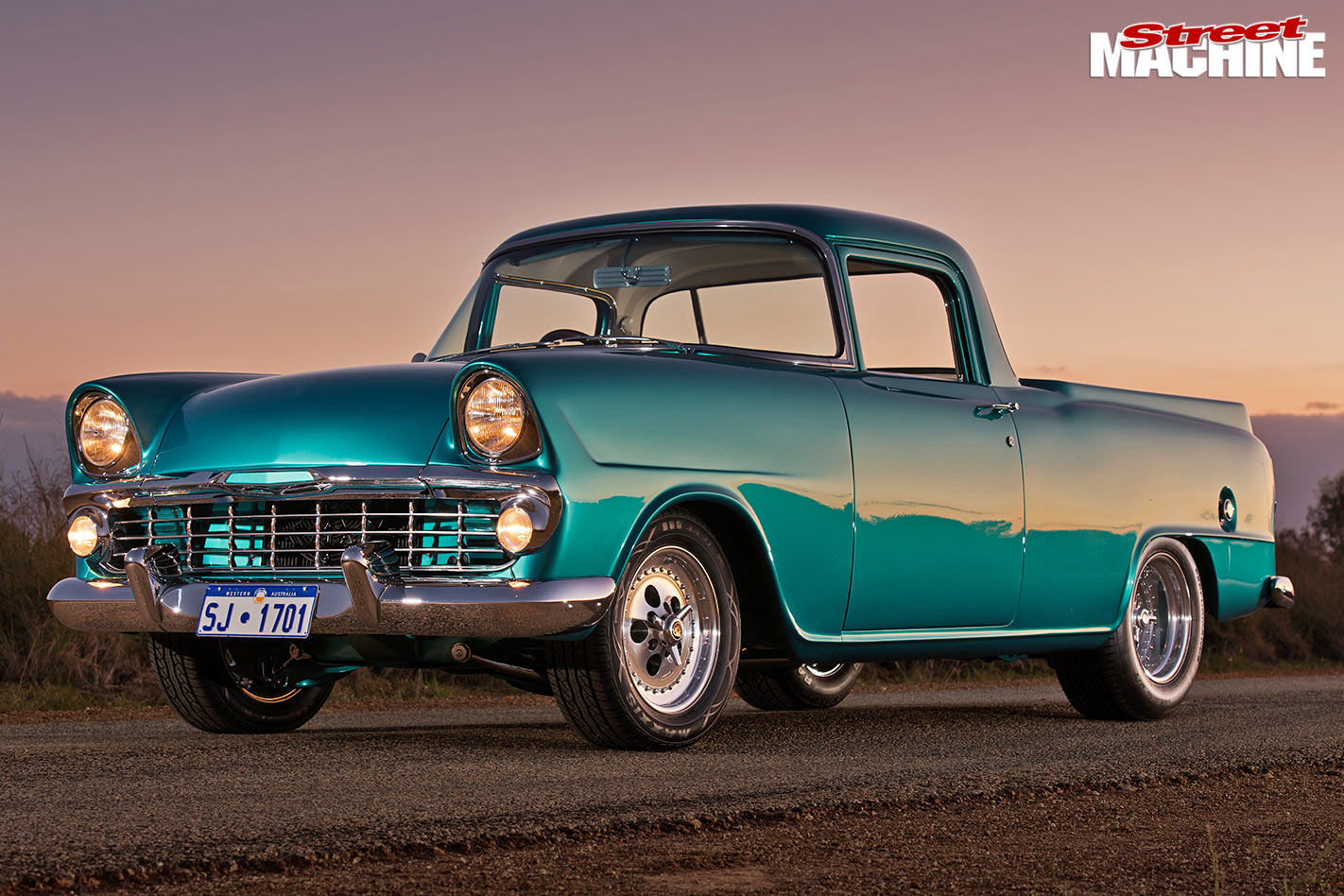 That’s an admirably gung-ho attitude for someone who was then a novice car builder. That’s right, the EK is Peter’s first major restohottie project! Sure, with sheet metal and mechanical apprenticeships under his belt, he already had the basics, but nothing he’d done before had required a decade of dedication.

That being said, Peter’s unique plans for an EK Maloo, complete with V8 power and acceptable brakes, didn’t materialise right away. “Originally I was just going to build a hot six, so I put in a 186 running twin Strombergs and an Aussie four-speed,” he says. 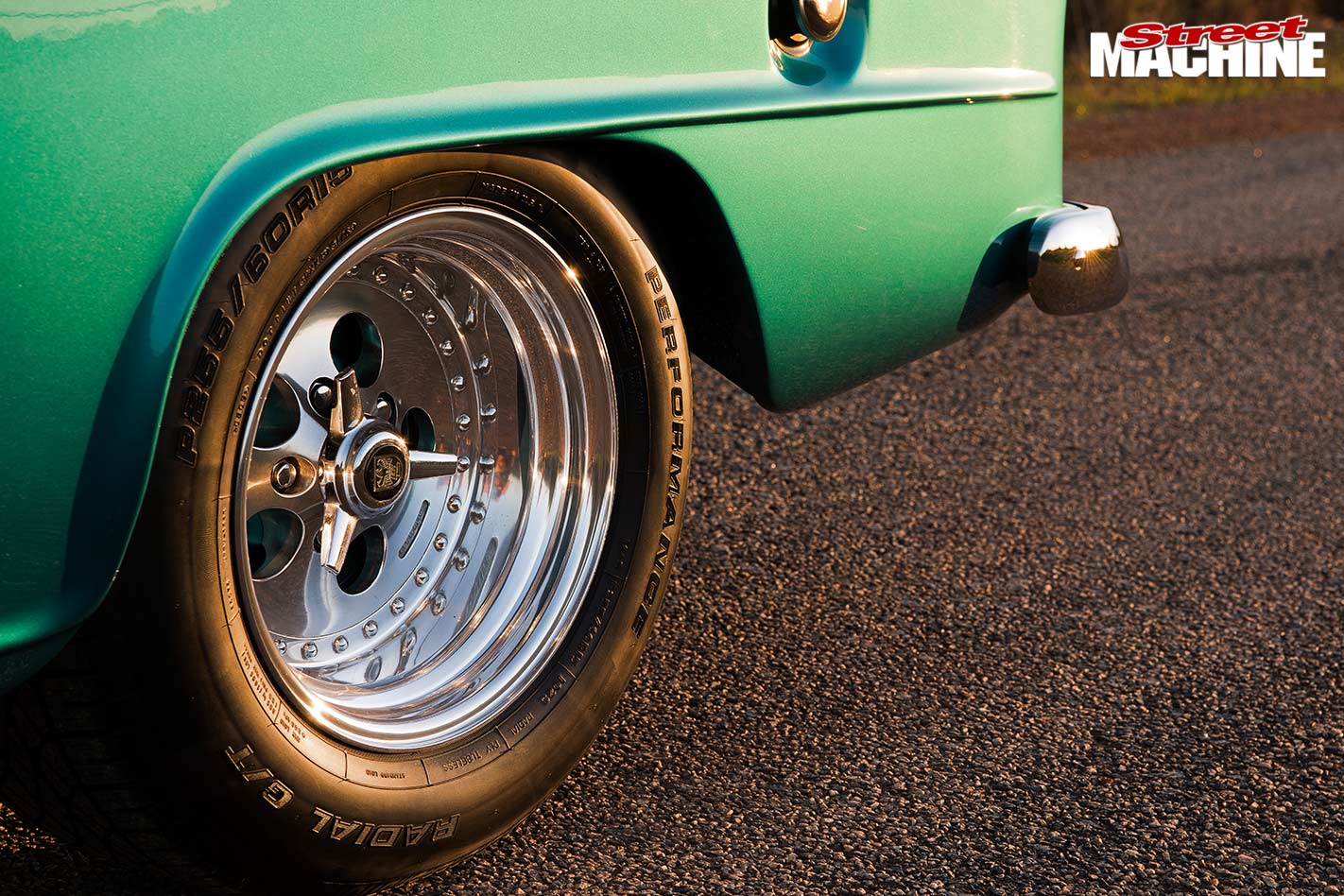 He’d already fixed the rust, sourcing a decent subframe from a stalled project as well as whacking some patch-panels in the floor. Five years and an HR disc-brake front end later, it was good enough for the WA authorities. Believe it or not, it was those same authorities that encouraged the bigger, badder motor.

“I was happy with the 186, but when I went to the police licensing department to have the engineering signed off, they suggested I get approval for a V8!” 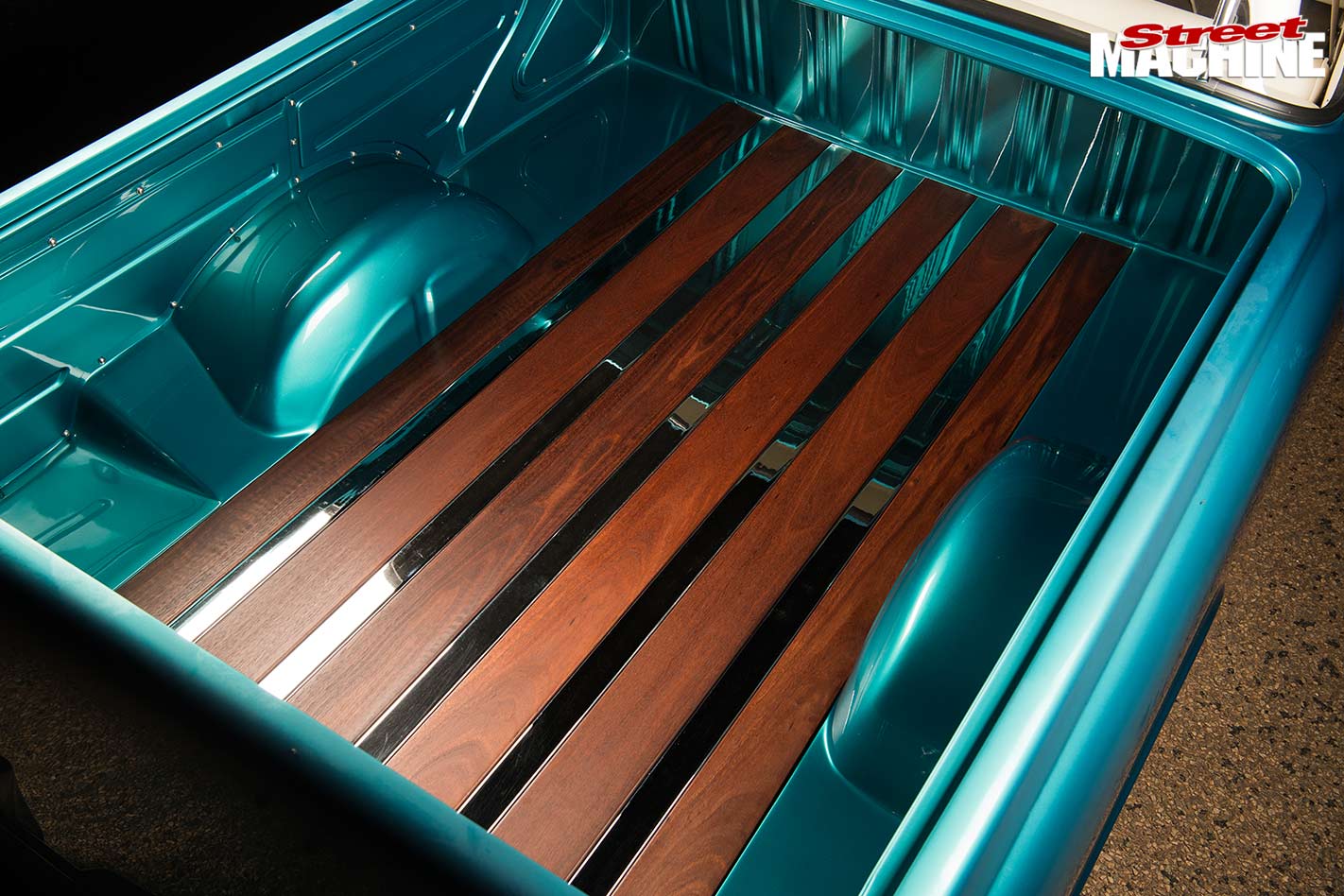 The factory particleboard tray was toast, so he formed up some hat sections out of mild steel and had them chromeplated. Between each section is a finely honed and oiled jarrah plank. Either side, there’s just enough room for the factory tubs, which have copped a two-inch stretch

Following that fateful appointment, Peter’s epiphany struck: the General had never built a Maloo before 1990, but what if they had?

The EK returned home for another birthday; the slow bits were sold off and Peter started afresh – which included ditching the HR front end for a narrowed Jaguar set-up. 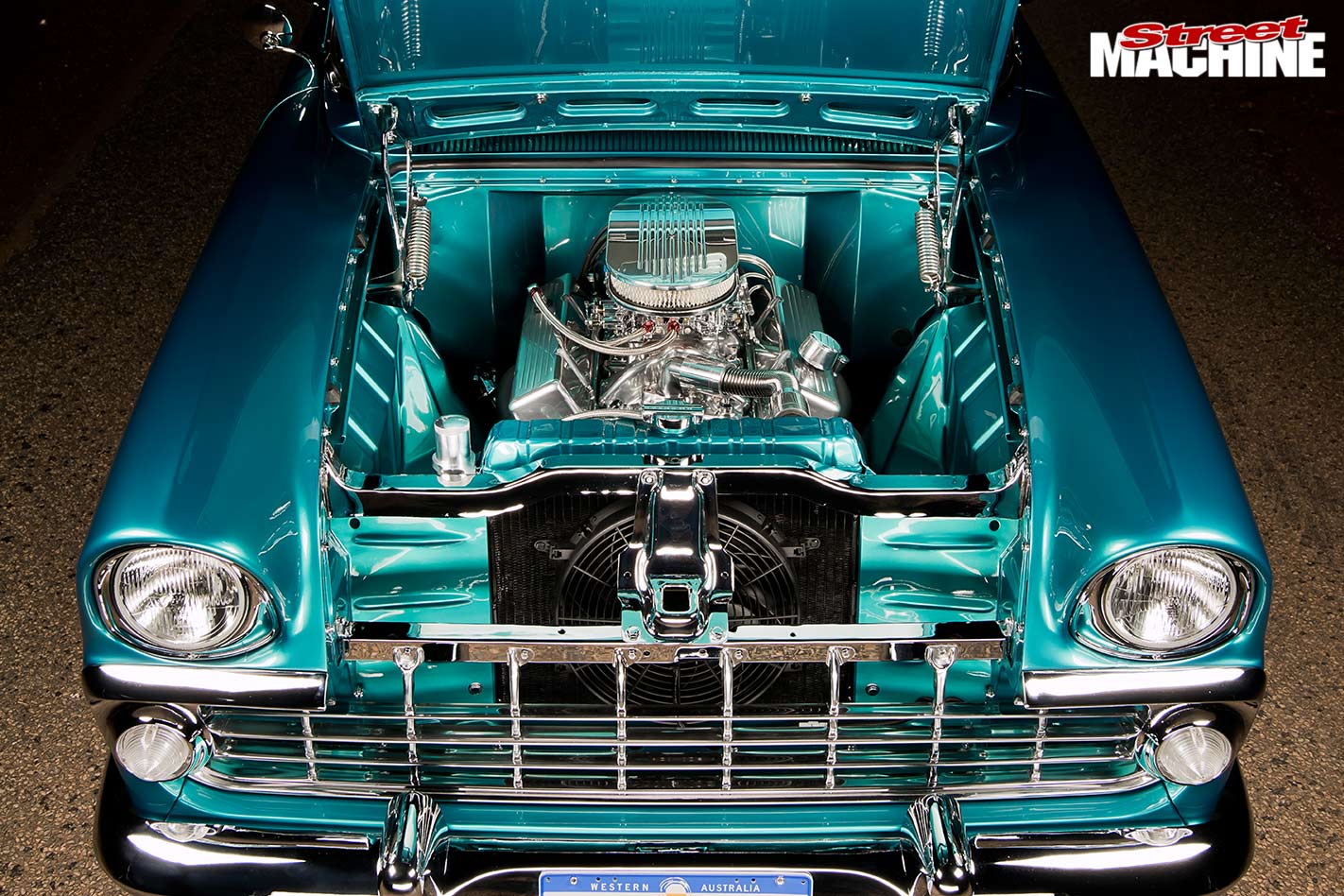 Peter sourced a new Chev 350 crate motor locally, but still pulled it down for a look before firing it up. Disassembly also meant he could paint up the heads and block, sending the rest to K&D Chrome Metal Finishers to be chrome-plated

Despite knowing the ratty patina and patch panels were no longer going to cut it, Peter sorted the engine and driveline first, grabbing himself a brand-new Chev crate motor and dummy-fitting it. Anyone who’s inserted a V8 into an early girl knows that the headers can cause a major migraine; some people choose to just punch a hole in the inner guards and be done with it, but not Peter.

“I just tried to make them nice and neat; like they were supposed to be there,” he says. “They’re the first extractors I’ve made; they took a while to get the bends nice and tight so they hug the engine block.” With a 350 up front, nine-inch down the back and a Turbo 350 in the middle, Peter then got serious on the body; naturally he started by disassembling everything again! Mounting the body to a rotisserie ensured he had access to all areas of the ex-yard art ute. 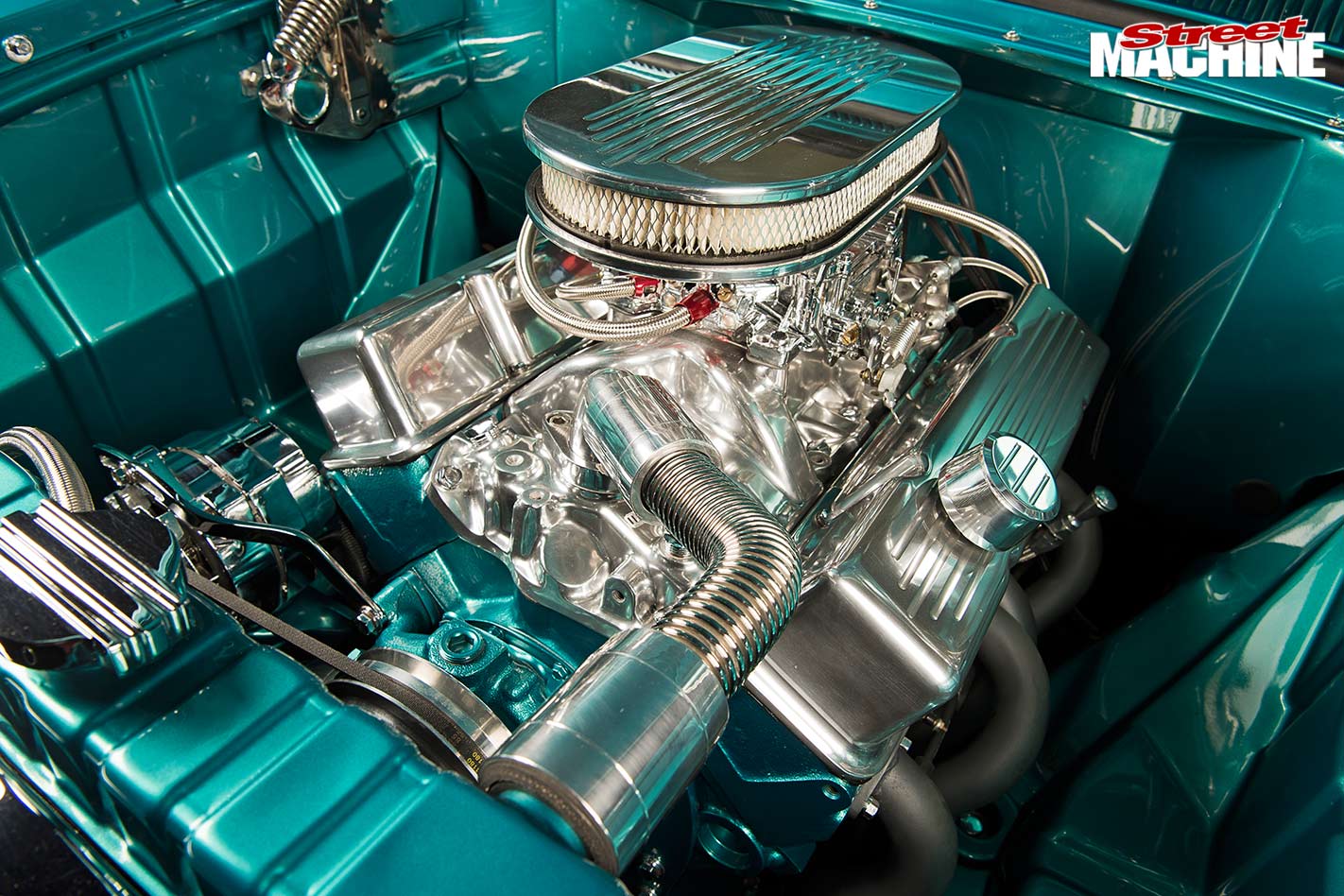 The donk is stock but topped by a 660cfm Edelbrock carburettor and Edelbrock Performer manifold combo. Peter is not sure of the power output: “I thought about putting it on a dyno or even taking it down the strip at the Motorplex just out of interest, but I don’t want to scratch up the car, you know?” Looking at this engine bay, you can understand his dilemma

“The only thing I didn’t have to touch was the bonnet and the driver’s-side door,” he says. “I reckon another 12 months in that paddock and it would have been fully rusted out.”

Saving old metal from the brink of destruction is one thing, but getting it back on the road as a trophy-hauling attention monster is something else altogether. 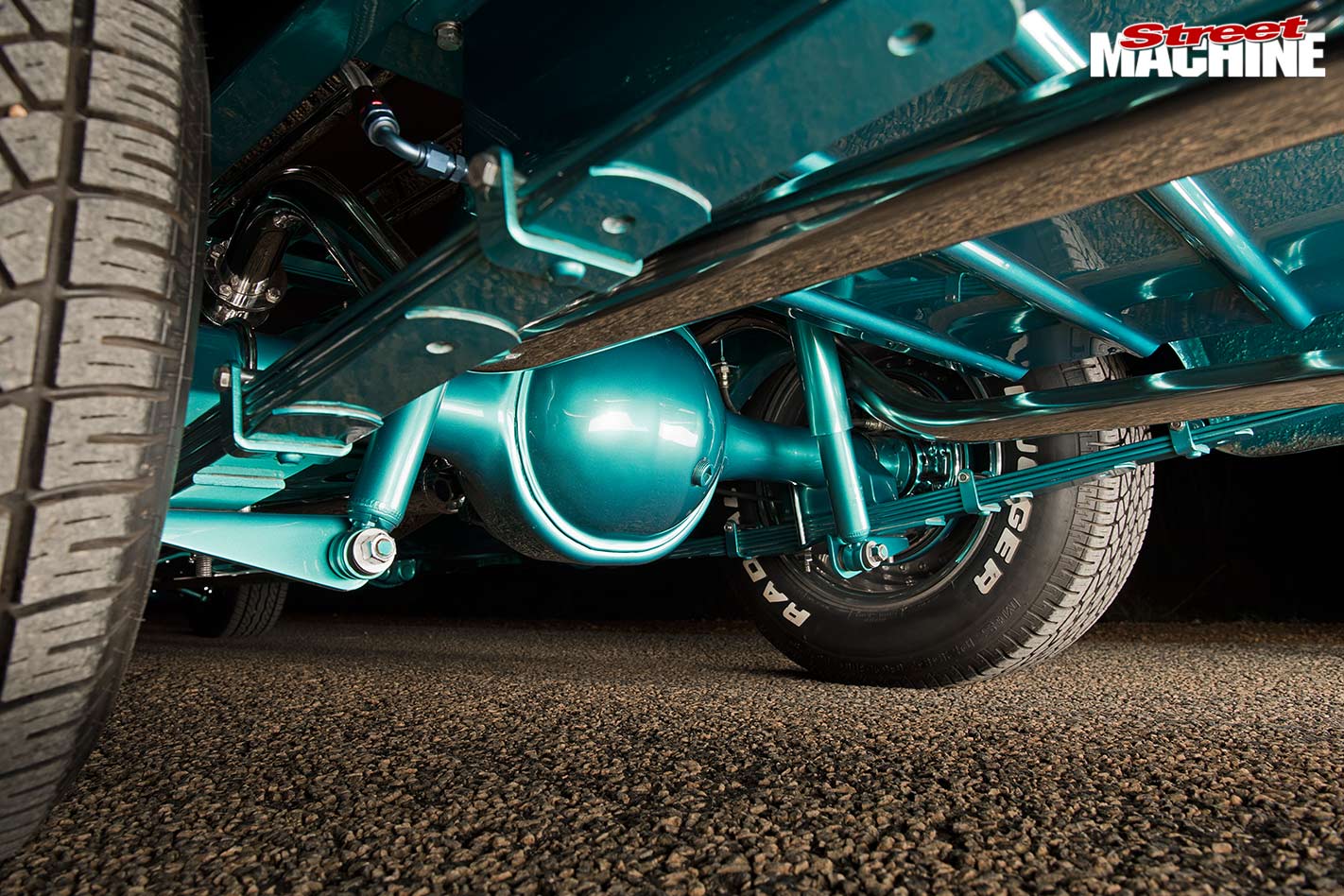 Rather than source an off-the-shelf crossmember, Peter dropped the 350 crate motor onto a Series III Jaguar item narrowed by 4in to allow the motor to sit low down while retaining the standard sump. Hanging off the sides are a pair of XB stoppers. “I had to machine the stub axles to suit the Falcon rotors, but the calipers bolted straight onto the Jag mount points,” Peter says. The rear end (above) is a more-conventional Ford 9in

“I had to make the front fenders – the lower half of the right one and all the left one,” Peter says. Asked whether he reused the factory headlight buckets, he nonchalantly replies: “Nope, made that too! I used an English wheel, MIG welder and angle grinder. It took me three months, working every weekend.”

It’s indistinguishable from a factory job, although Peter concedes it took him a few goes. “I had to scrap it a couple of times; I was welding along the edge to match the gaps and got a little too much heat in it.” 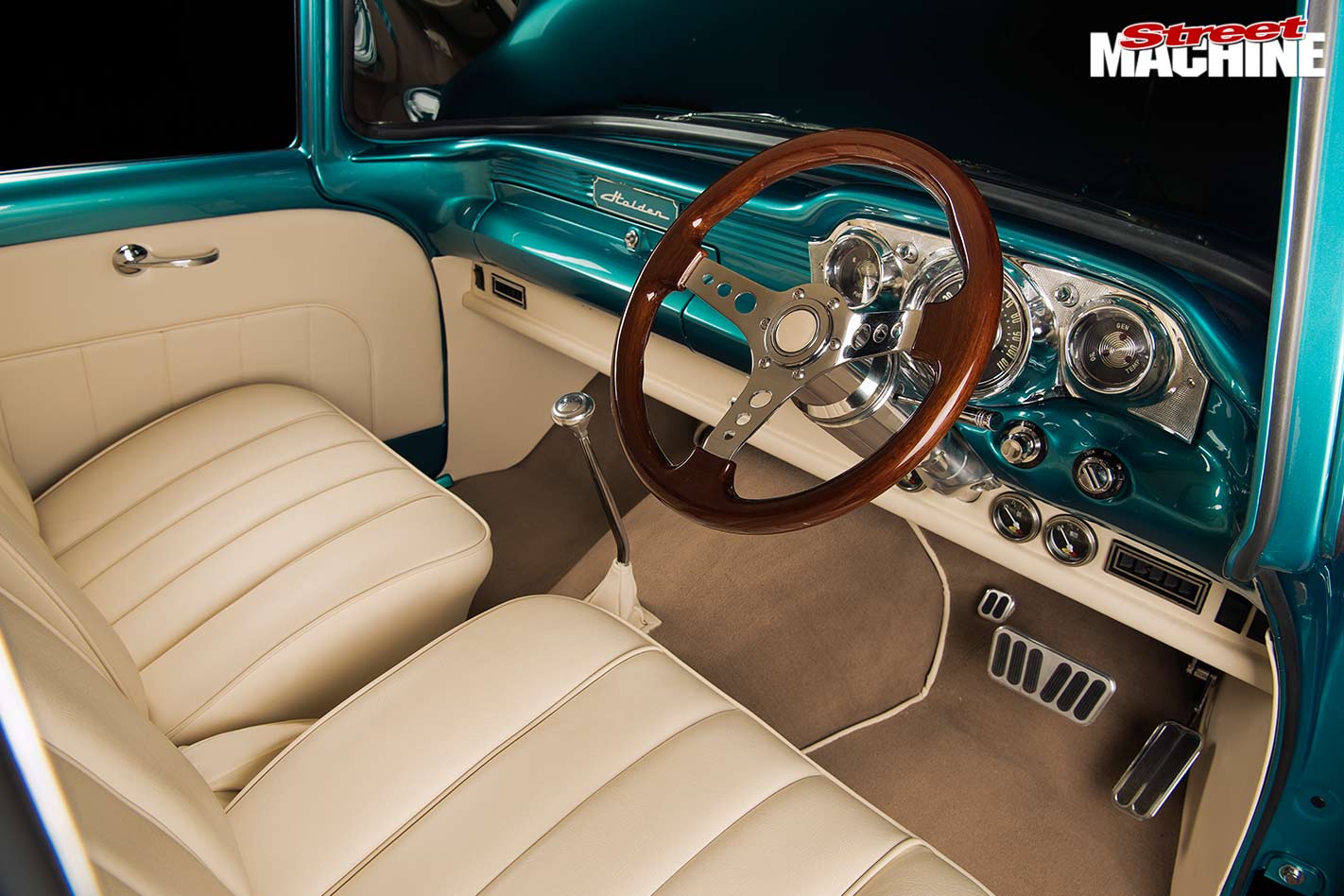 “I rolled into Byford Motor Trimmers and told them my ute needed a new interior; they were pretty disappointed when I said there was nothing left of the old one!” Peter laughs. Working with templates that Peter had cut, trimmers Matt and Johnno covered everything with rich cream marine-grade vinyl, including a pair of HR Premier buckets

Craig Holmes at Holmes Panel & Paint in Byford took on the job of spraying up the car, applying liberal amounts of Polynesian Green across not only the body and engine bay, but also the tray, undercarriage and all over the dash, followed by lashings of clear. Gotta love old cars with more metal than plastic!

Final assembly occurred back at the homestead, with Peter reinstalling all running gear, brakes and suspension, along with his own custom-made wiring loom. The interior, stitched off-site by Matt and Johnno at Byford Motor Trimmers, was the last part of the process. 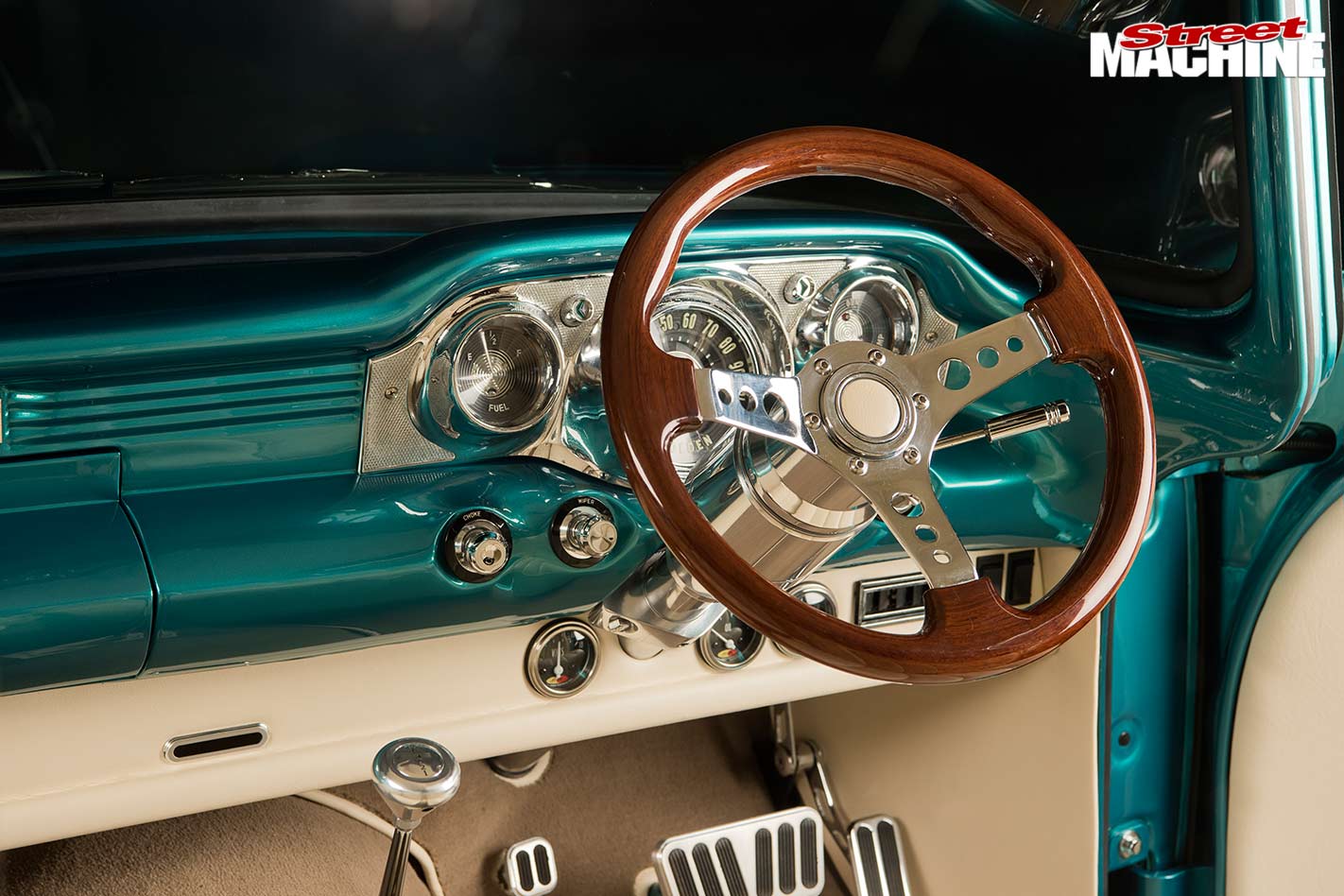 Having finished his story, Peter opens the driver’s door and sinks into the deep cream HR Premier bucket seat. A picture is worth a thousand words: Firing up the big 350, it’s time for the EK Maloo’s long overdue photoshoot under the fading West Australian sun. The General didn’t make a Maloo in ’62, but Peter Woolven’s V8 EK ute goes a long way to sorting that oversight, and he’s pulled in plenty of tinware for his trouble. 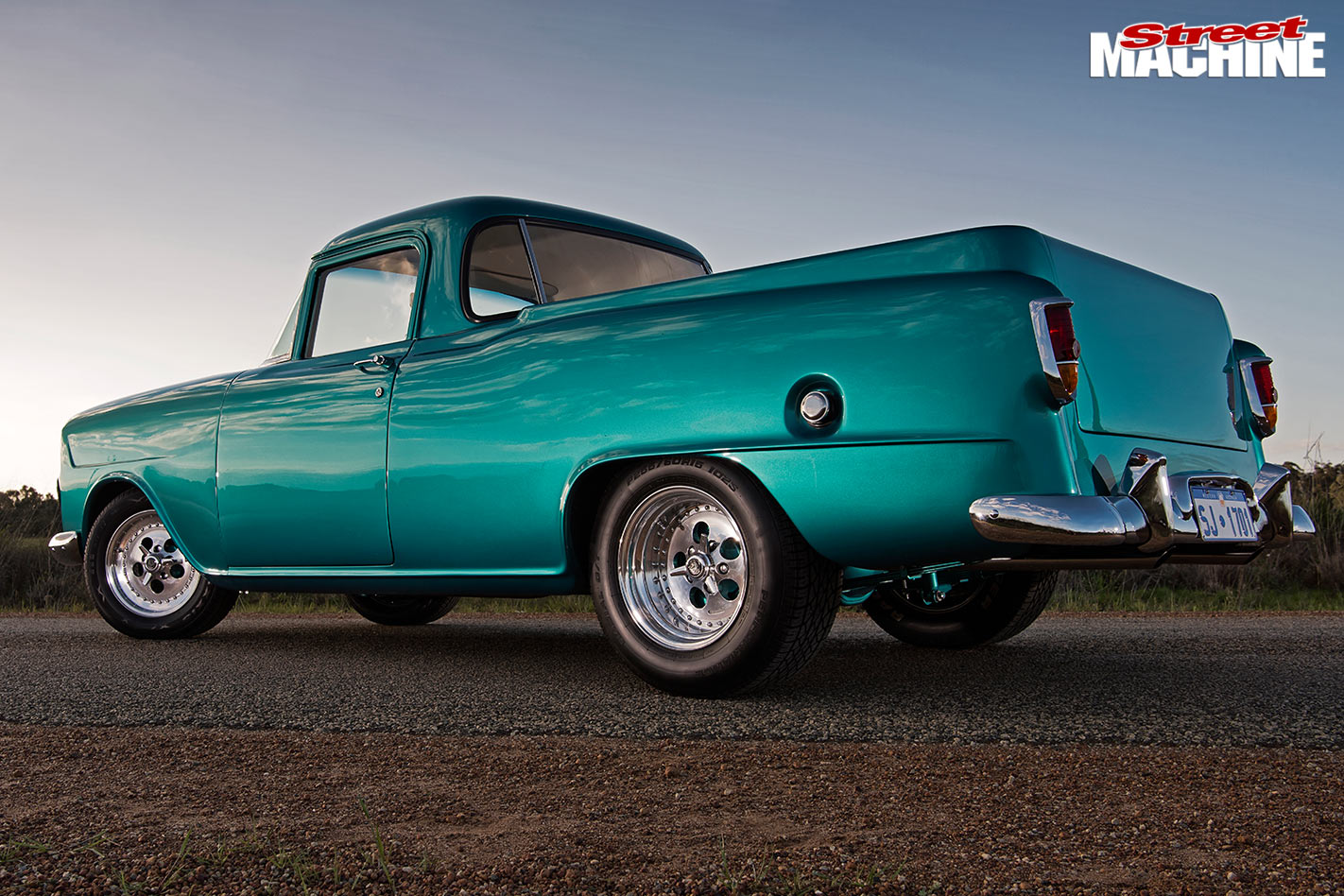 You don’t build a ute like this one – with a colour-coordinated undercarriage, perfect interior and more chrome than the Cadillac factory – without hauling home some shiny tinware every now and then! So far the EK has won Best Street Machine – Ute at the 2016 WA Hot Rod & Street Machine Spectacular, a bunch of trophies at the MAX Pinjarra show, and Top Paint, Best Engine Bay, Best Top Modified and Best Top Custom at GM Owners Day. 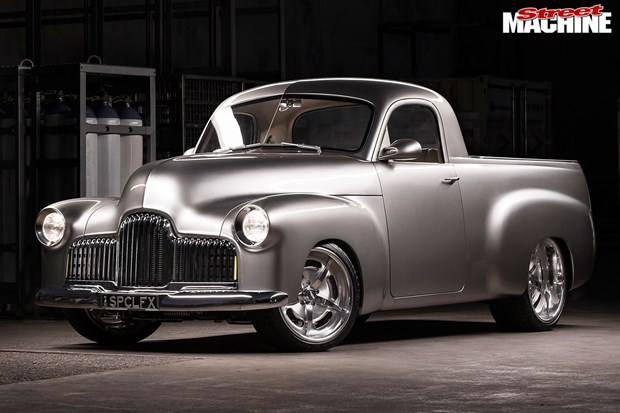 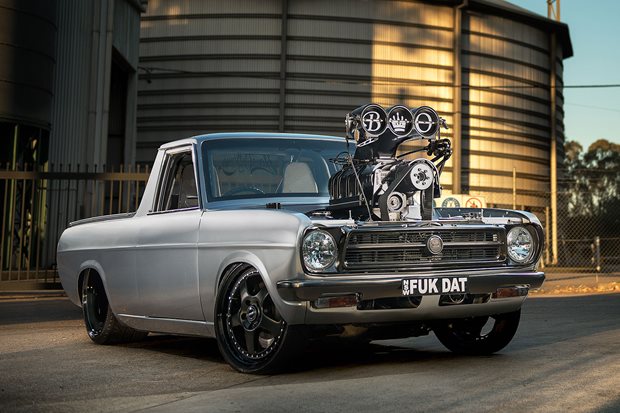 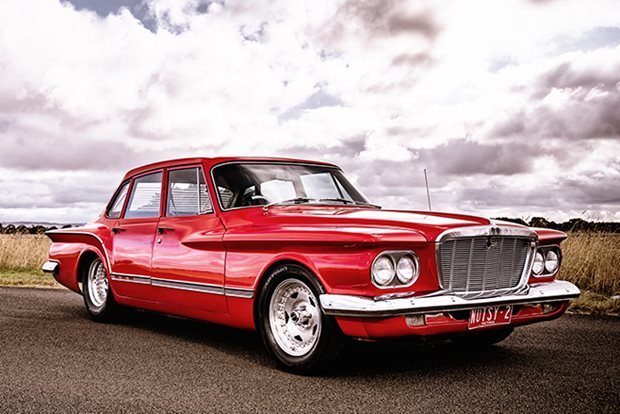