BRISBANE is an awesome place for street machines, hot rods, muscle cars and cool bikes. Not to mention a great nightlife with a smorgasbord of live bands to see. The only thing that sucks in Brisbane is the traffic!

I rode out to Little Mick’s Koolsville Studios shop, and his wife Tracey told me there was a car and bike show on at the Hamilton Hotel – the 4th Annual Rods & Rockabilly Festival. By the time I arrived quite a few cars and bikes had left the show, but I did happen to notice a sleeper that I absolutely loved.

Robert Toy’s 1957 FE Holden ute is painted in its original factory pale green and most people would walk right past it without giving it a second glance. However I noticed the number plate had ‘308’ in it. Could it be a Holden V8 under the bonnet? 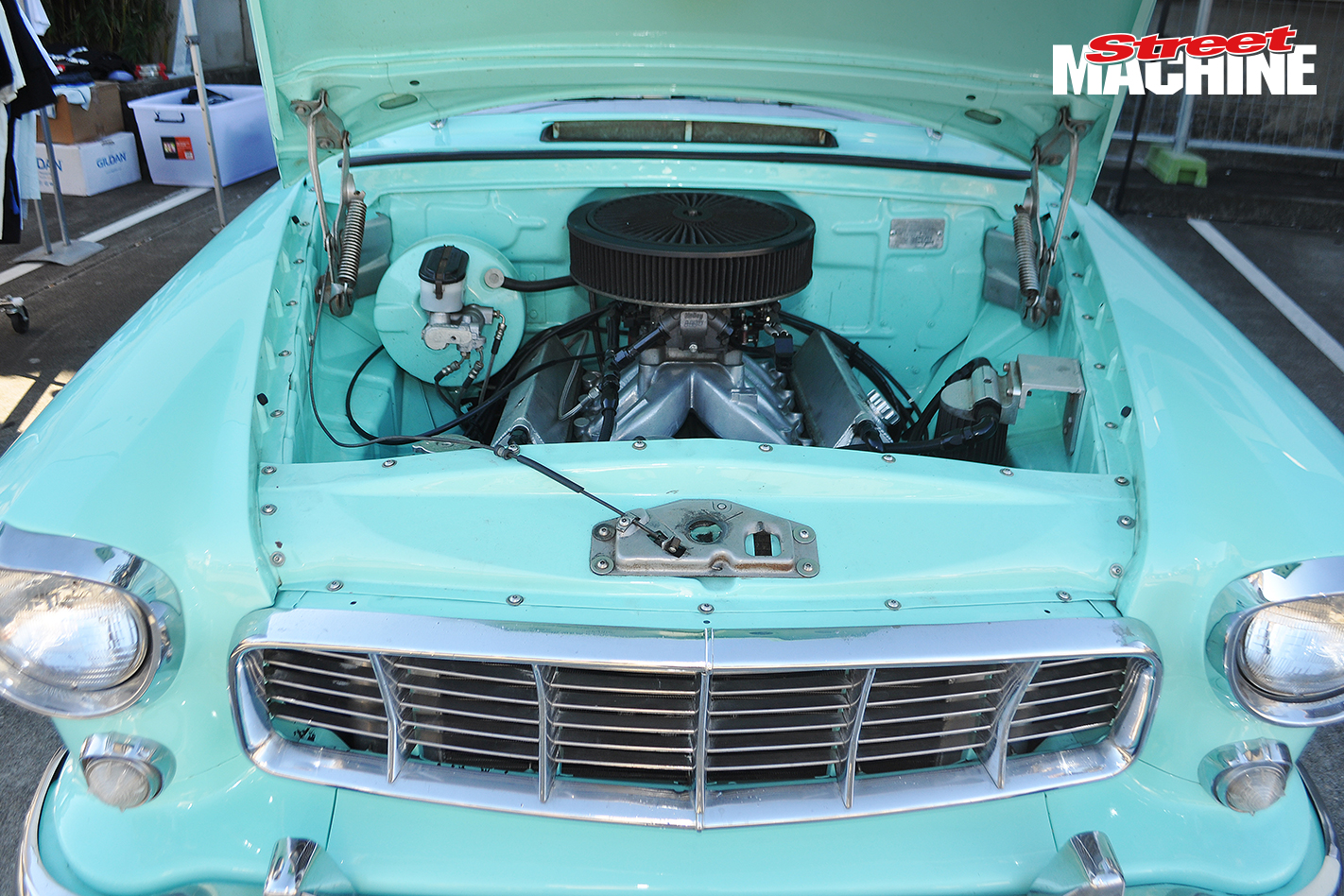 I walked around the tidy green ute and noticed the super-neat chrome-moly ’cage, which had a 2008 ANDRA inspection sticker with bolt-in intrusion bars, and I knew straight away this had been a 10-second street car.

I asked Rob’s wife Rachel if I could have a look under the bonnet. There it was: a V8 Holden with a Harrop single-plane sitting in the engine bay. This was no ordinary ute. In this day and age of LS1s being shoehorned into everything, it was so pleasing to see a V8 Holden powering this sneaky street animal.

After I took some photos of other cars, caravans, hot rods, bikes and the band, I came back to talk to Rob. The old ute has run 10.4s at 130mph naturally aspirated with a 383 stroker in it, but after Rob and Rachel’s first son was born seven years ago, the FE was retuned to make it a daily driver. The big cammed 383 has been replaced with a 355, but it’s still no slouch on the strip, running 11.2s at 120mph. 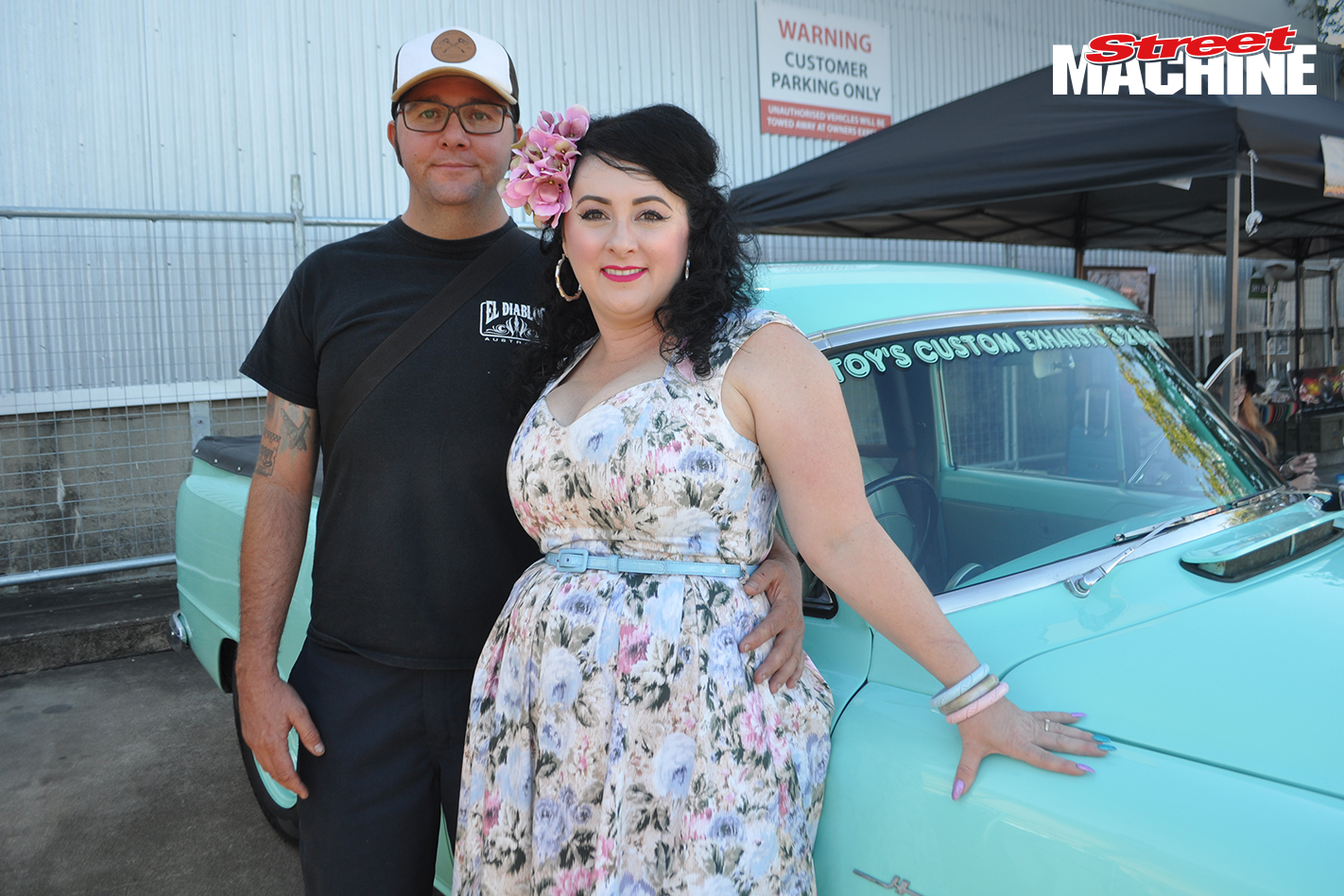 The 355 has a COME stroker crank and Scat rods with forged pistons. Compression is only around 10.5:1 and the engine runs on BP Ultimate straight out of the bowser. The sump is a High Energy, while the oil pump is a stock GM. Marty White took care of the cast-iron VN heads; Marty’s dad John White is a legendary drag racer from the 70s. The intake valves are 2.02 inches and exhaust valves are 1.6 inches, operated on by a solid-roller Comp cam.

Rob built his own exhaust pipes and they’re around 32 inches long. The 1.875-inch-diameter primaries with a 3.5-inch collector dump into a twin 3½-inch system with Hurricane straight-through mufflers. The pipes were a piece of cake for Rob, as he owns and runs Toy’s Muffler & Mechanical in Brisbane.

The bulletproof Bob Grant-built two-speed Powerglide has an eight-inch 4500rpm stall converter, sending the power back to 31-spline nine-inch LSD with 3.55:1 gears. The tyres for everyday driving are Desert Duelers on steel 15x8 rims, but for race day Rob throws on some Mickey Thompson 28x9 drag radials. To hook up, the ute has mono-leaf springs with CalTracs and pump-up Commodore shocks. Up front are Pedders 90/10s with King springs. Brakes are HQ discs with HZ aluminium calipers. 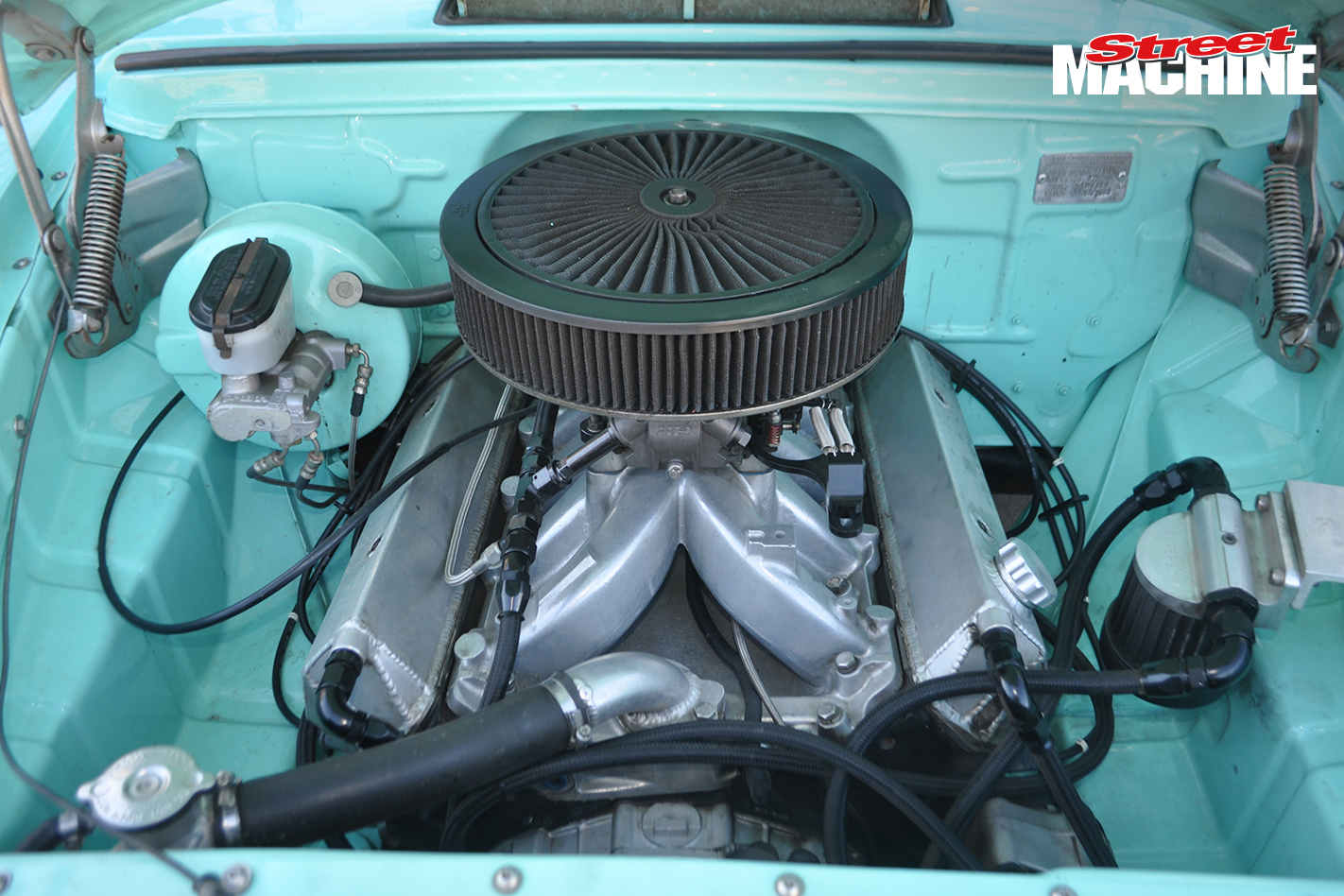 Rob started on his ute 15 years ago. It was completely stock, with a 132-cube six-cylinder and three-on-the-tree. “It was the slowest car I’ve ever driven!” he laughed. The FE still has a stock-looking bench seat, but the race harness and ’cage are a giveaway as to its potential. Rob and Matt Wright spent countless hours getting the ute into shape and running reliably.

One of the things I found interesting was that when he had the 383 in the ute Rob used to run a Burpengary Transmissions three-speed Trimatic. Rob absolutely loved the Trimatic for the street and strip; the only problem was that the 383 would blow the fragile top gear. The 355 is making 100hp less than the 383, so a Trimatic might live with a 3500 stall converter; I wouldn’t be surprised if Rob goes back to the Trimatic.

Rob told me he runs a custom aluminium radiator and a flex fan, so the car never gets hot. The sleepy green ute gets thrashed in the dirt and on the street and is super-reliable. The next outing for the FE will most likely be the Nostalgia Drags at Willowbank in August. Say hi to Rob and tell him you read about his car in Street Machine.

The Rods & Rockabilly Festival had plenty of cool cars. There was a beautiful ’55 Chevy, aptly plated NICE55, as well as some neat hot rods and a black Cadillac. The following weekend there was a big ride on; Brisbane has an overwhelming choice of car and bike events to either watch or participate in. I could easily move there, but I reckon I would go nuts driving in the traffic!