ALTHOUGH GM-H never made a five-door GTS, Matt Gibbs’s range-topping Premier wagon was the closest thing to one that money could buy back in the summer of ’69. The HK was the last Holden model before the release of the locally developed 308ci V8, and Matt’s example rolled off the production line fitted with a 307ci Chev and Powerglide transmission. 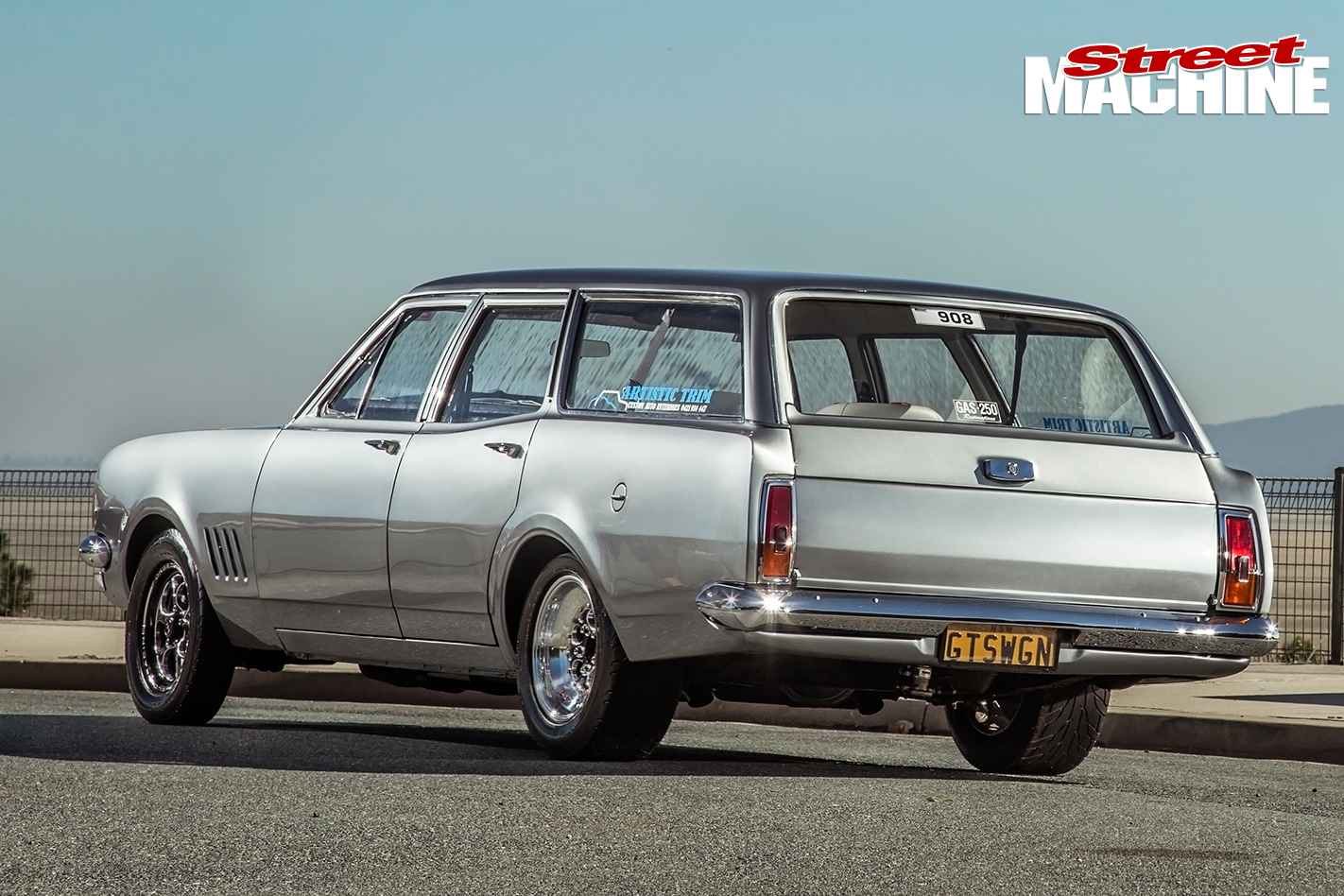 Aside from making it a fairly rare and desirable car, the driveline configuration meant the wagon was a particularly solid base for modification, especially for devotees of longroof Holdens.

“About 10 years ago I had an EH wagon that was completely stock except for a fuel-injected 202 and tricked Trimatic,” Matt says. “I pulled the EH off the road to do a build and after doing the sums I decided it was going to be more cost-effective to buy a wagon that was already registered with a V8. I ended up finding the HK a couple of streets away from where I was working at the time.” 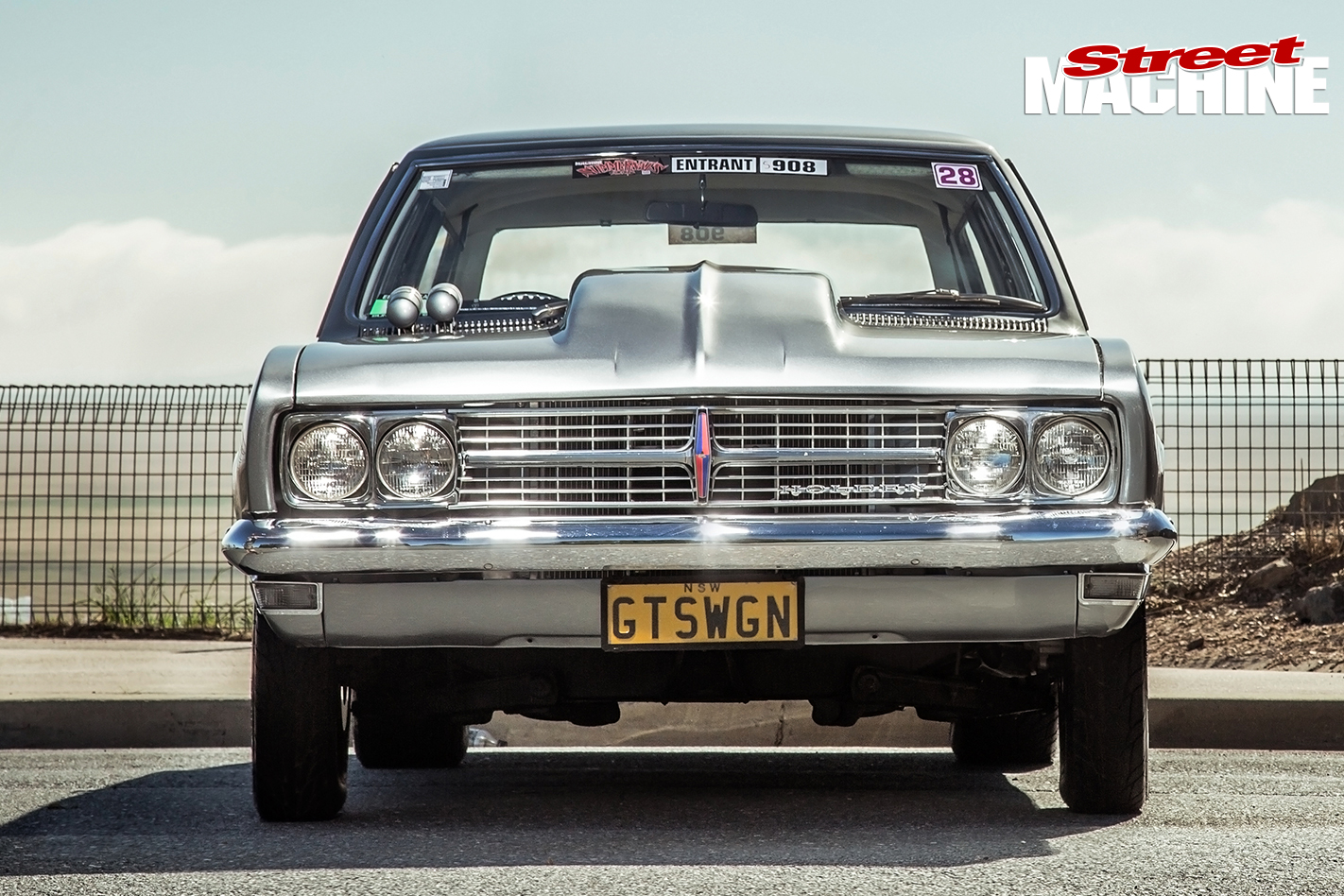 The car has sported a couple of different looks over the years, but the current incarnation with 15in Welds and a reverse-cowl bonnet is Matt's favourite

Someone had treated the wagon to a backyard respray, and while it was a little rough around the edges, the aforementioned factory small-block, genuine HT Monaro bonnet and fluted guards all meant the car had plenty of potential. Matt dragged it back to his home workshop, Artistic Trim in Milperra, NSW, and got stuck straight in.

A full-scale restoration ensued, and aside from the paint and panel, which was handled by Gas 250 Restorations, the entire build was completed in-house. 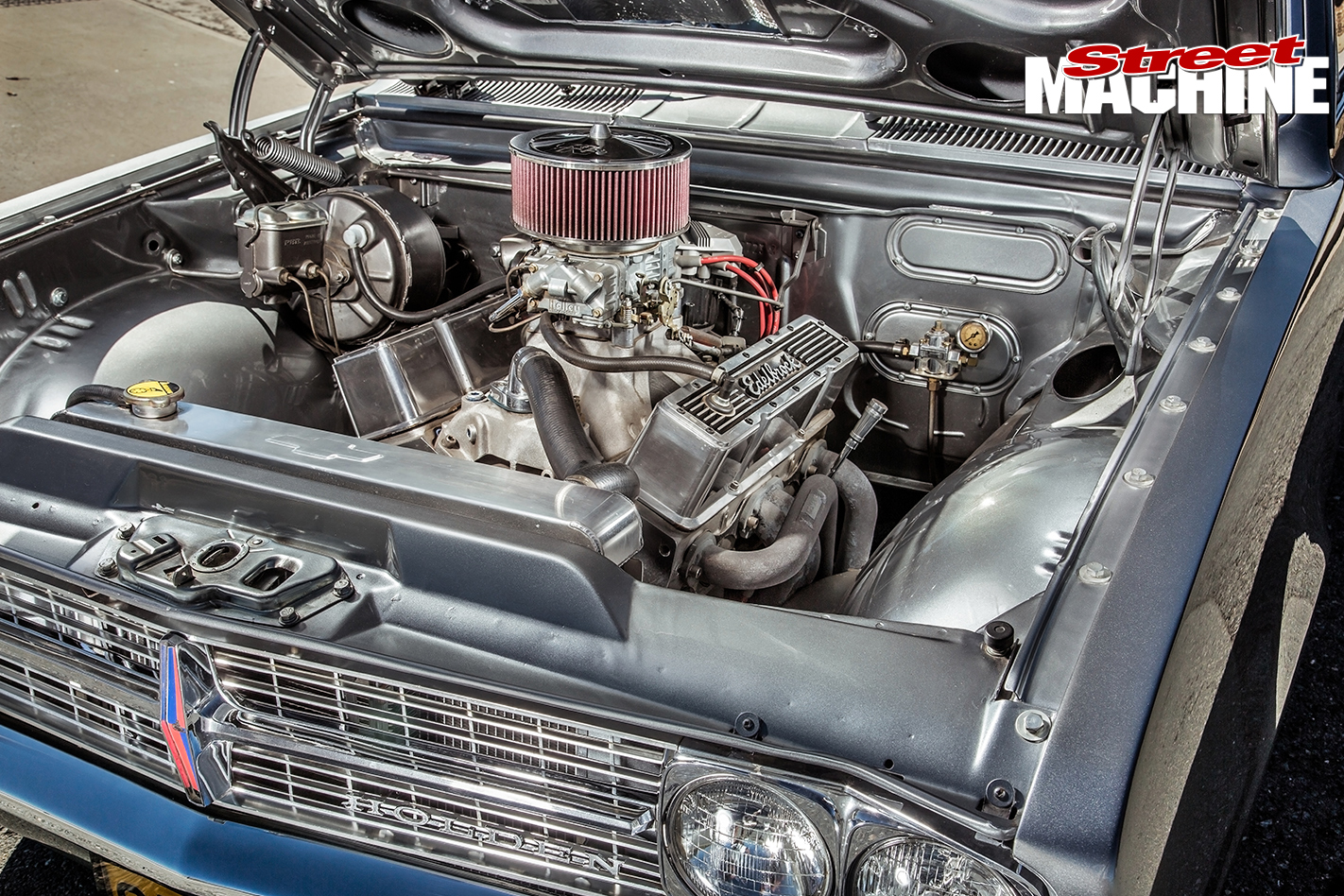 Matt replaced the factory 307ci small-block with a 355-cuber that was screwed together by his father-in-law, Phill. A forged crank, GM Performance Parts conrods and forged Sealed Power pistons were used, along with a hydraulic camshaft of 290/300 advertised duration and .465/.480in lift. Alloy heads run 2.08 and 1.85in Manley valves, and the combo is topped by a Hurricane mid-rise single-plane and Holley 680 Street Avenger. 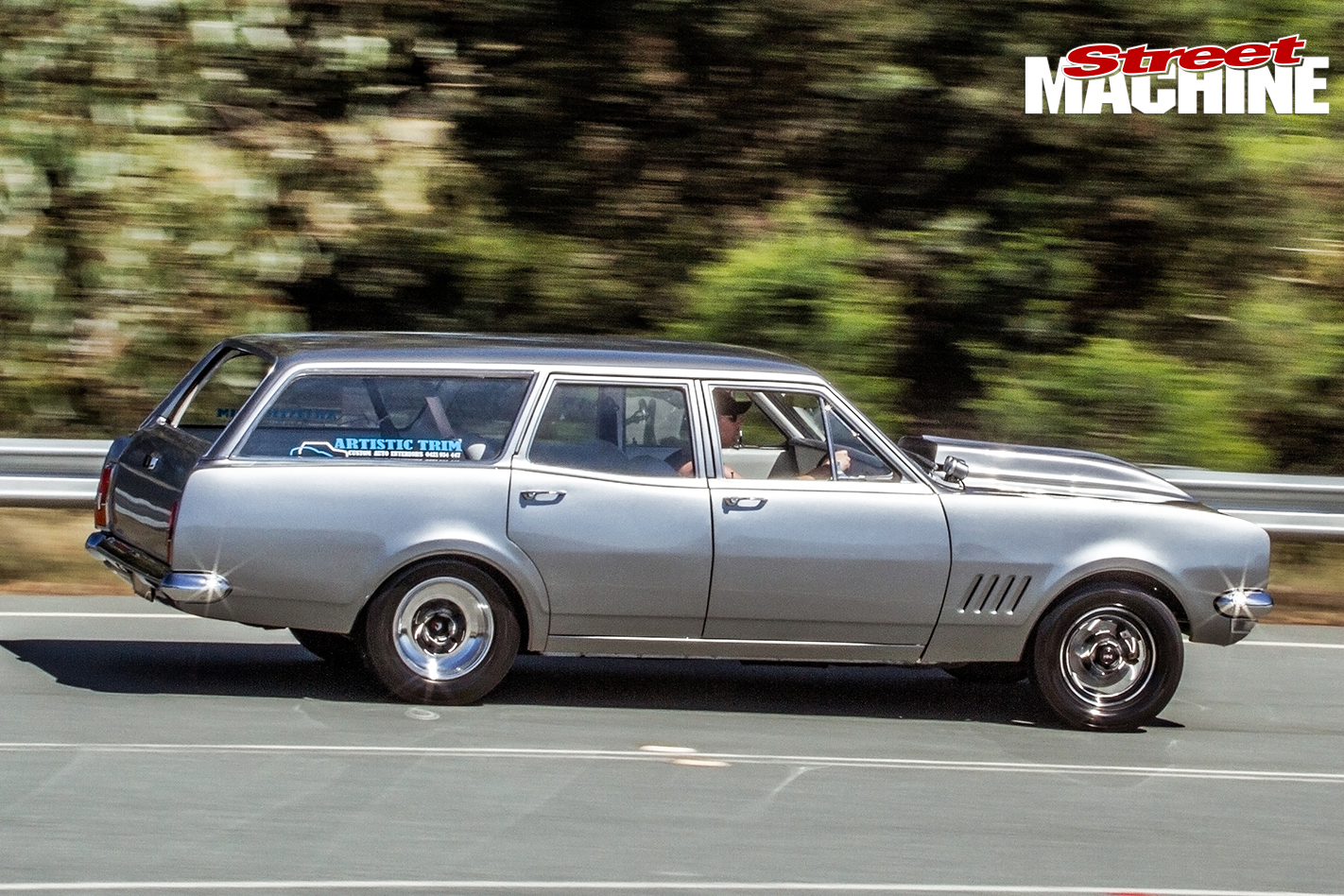 The factory ’Glide was replaced by a TH350, aided and abetted by a stage II shift kit and 2500rpm converter. Out back there’s a narrowed 31-spline nine-inch diff, and while the initial conversion was handled by a local engineering shop, Matt wasn’t satisfied with the job and re-did it himself. Likewise with the mini-tubs, which now house 15x10in Weld Magnums wearing 26x10in Mickey Thompson hoops. 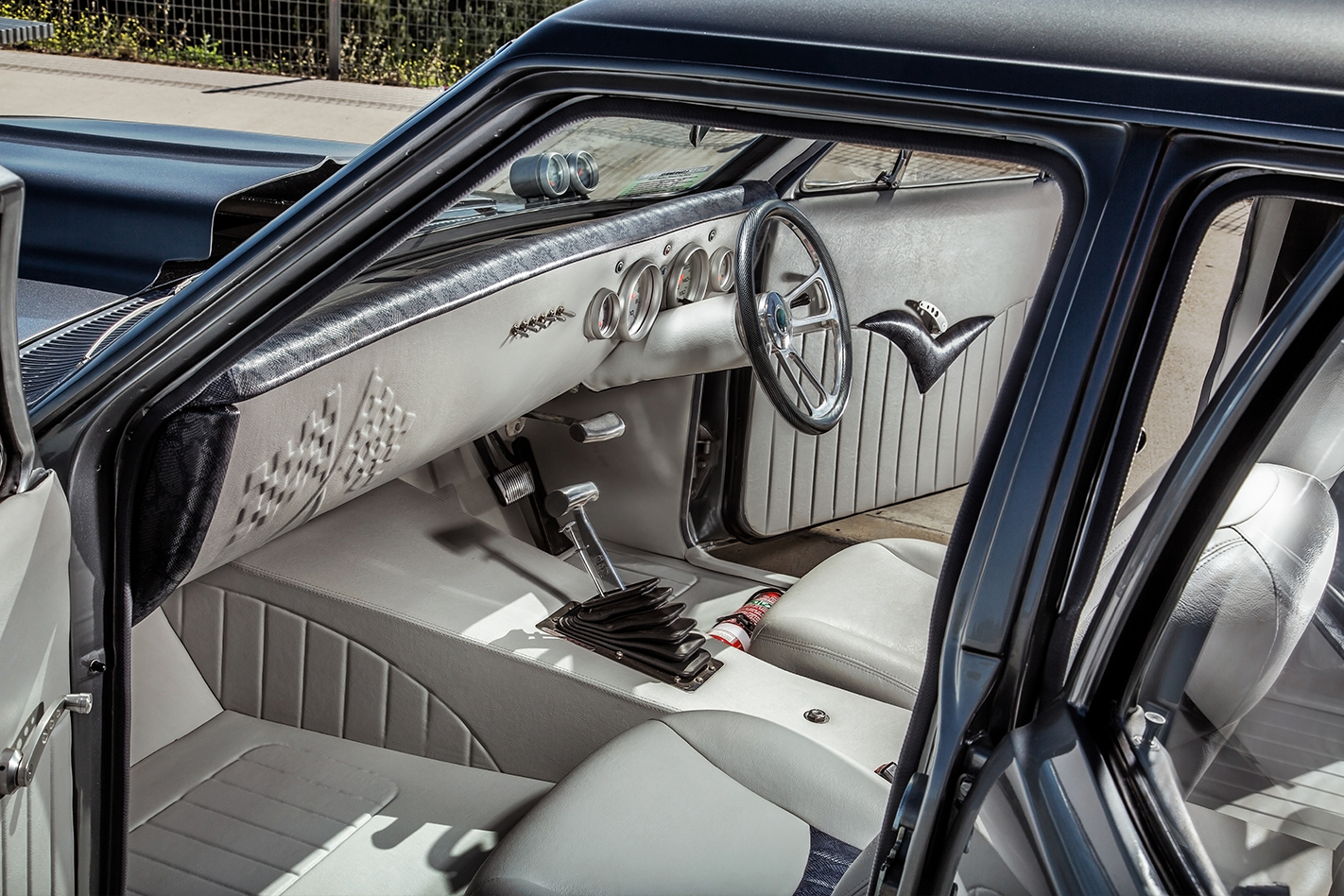 With Matt running his own motor trimming shop, you'd expect the interior to reflect a certain creative flair

As you’d expect for a car that’s owned by someone with their own motor trimming business, the interior is a standout feature. “First up I stripped the factory Premier dash out of it, ran sheet metal through the fascia, modified it to fit all the gauges and switches, and then trimmed it over the top,” Matt says of the slick-looking custom dash arrangement. 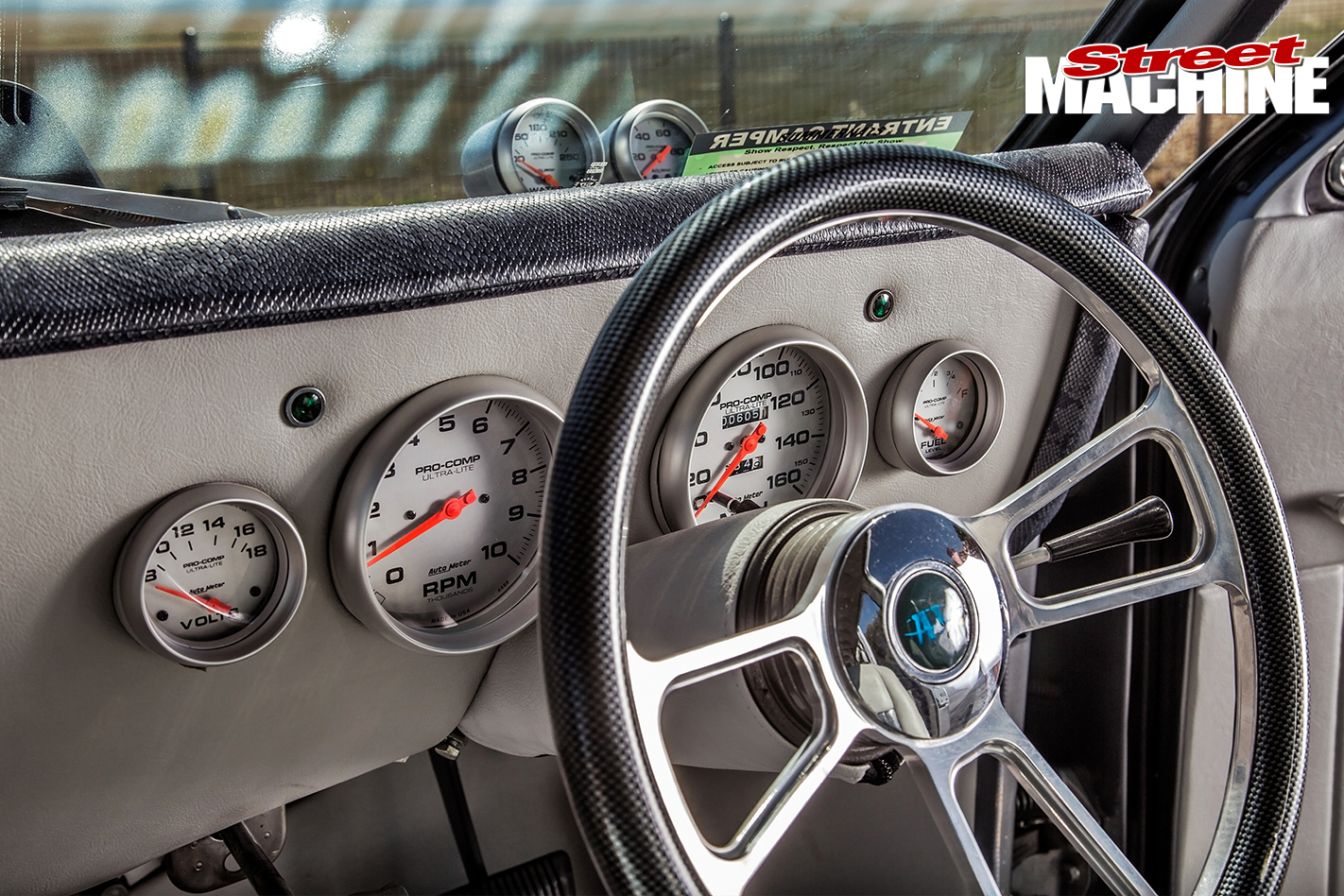 Seating-wise, a four-bucket conversion was in part necessitated by the tubs, but it looks pretty damn cool at the same time. Matt used modified VT Commodore seats with the headrests lopped off, custom-trimmed in pale grey leatherette with metallic blue snakeskin inserts. The hand-built console houses the ignition switch and shifter, while the custom flat floors are yet another highlight. “I built the floors out of custom wood and raised and levelled them off for a neat, sharp finish,” Matt says. 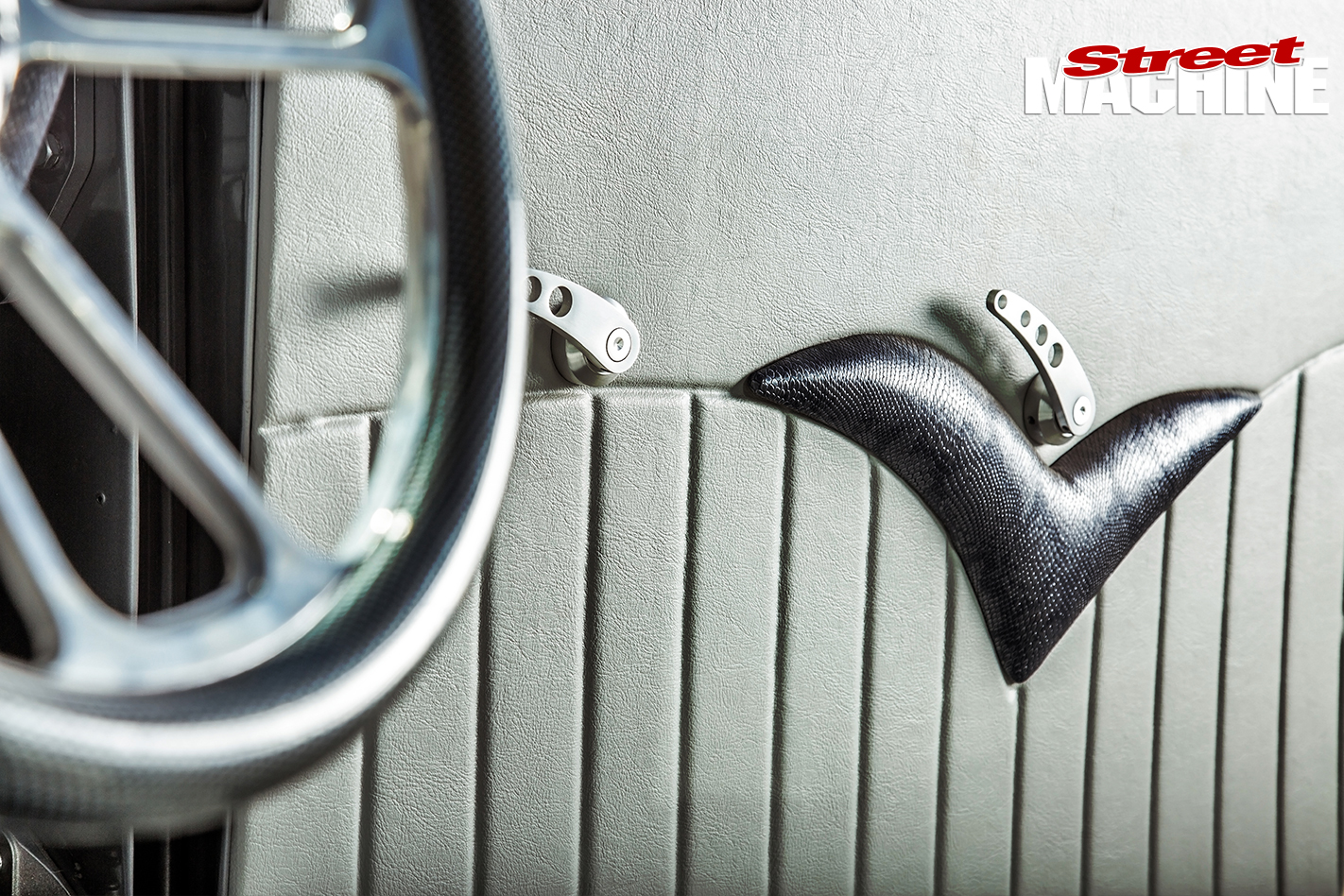 The door trims are also custom and feature snakeskin armrests and a bit of billet jewellery for good measure. The half-wrap steering wheel is also of billet construction, while the array of Auto Meter instruments and the B&M shifter round out a tastefully and comprehensively modified interior. 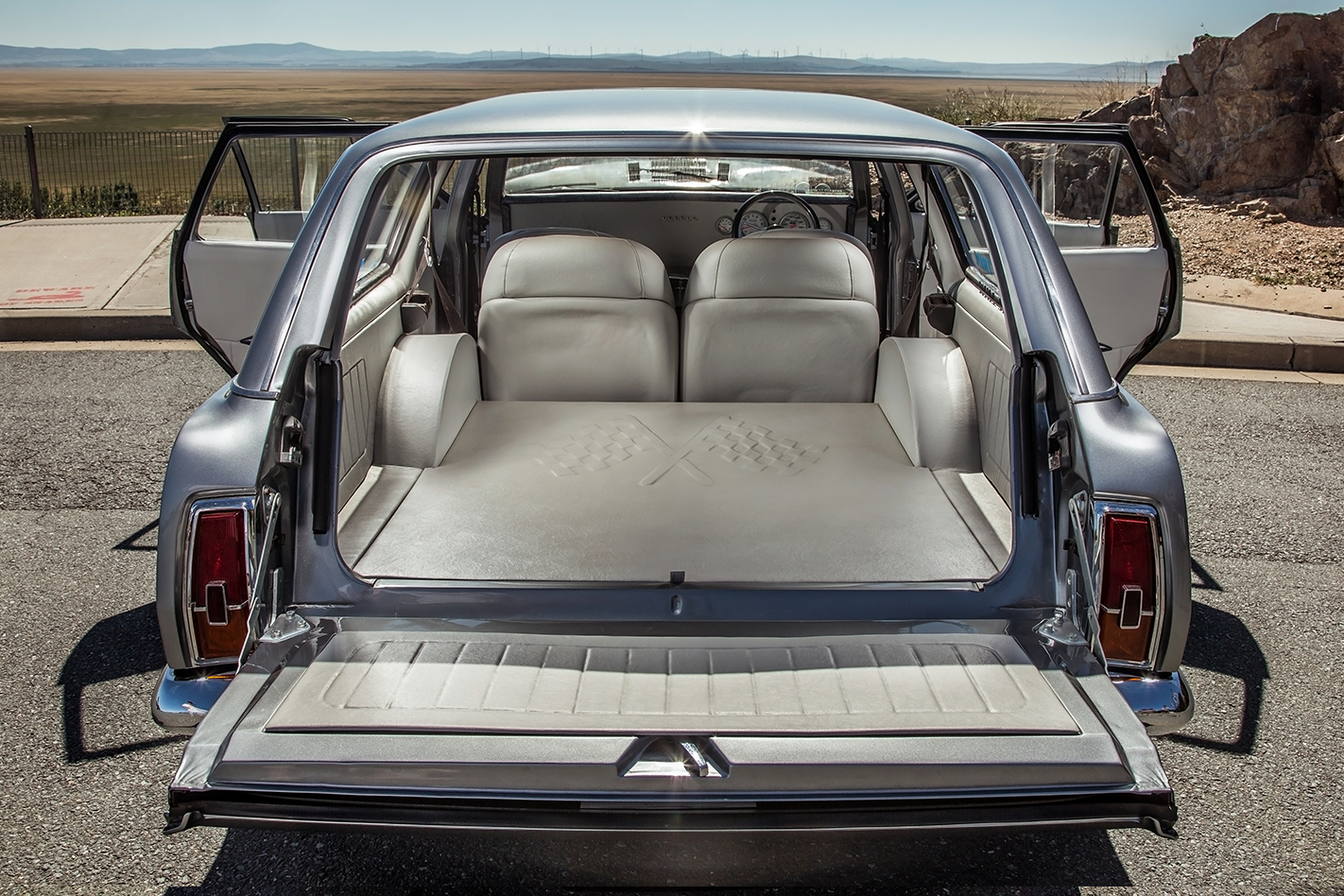 Matt doesn’t get the car out often and it hasn’t done a lot of shows, but it did pick up the Best Trim award at last year’s Kurnell Nationals, his local event. “It was good to get a trophy for the trim, especially at Kurnell where it’s a peer-voted award,” he says. “The trim is coming out this year though; I’d like to change it up with a different style and colour, bring it back to a more old-school look.”

Also high on the agenda for 2015 is a sharp increase in the horsepower stakes. “I’d like to run some sort of power-adder, but I haven’t decided whether to go with a turbo or a supercharger just yet.” 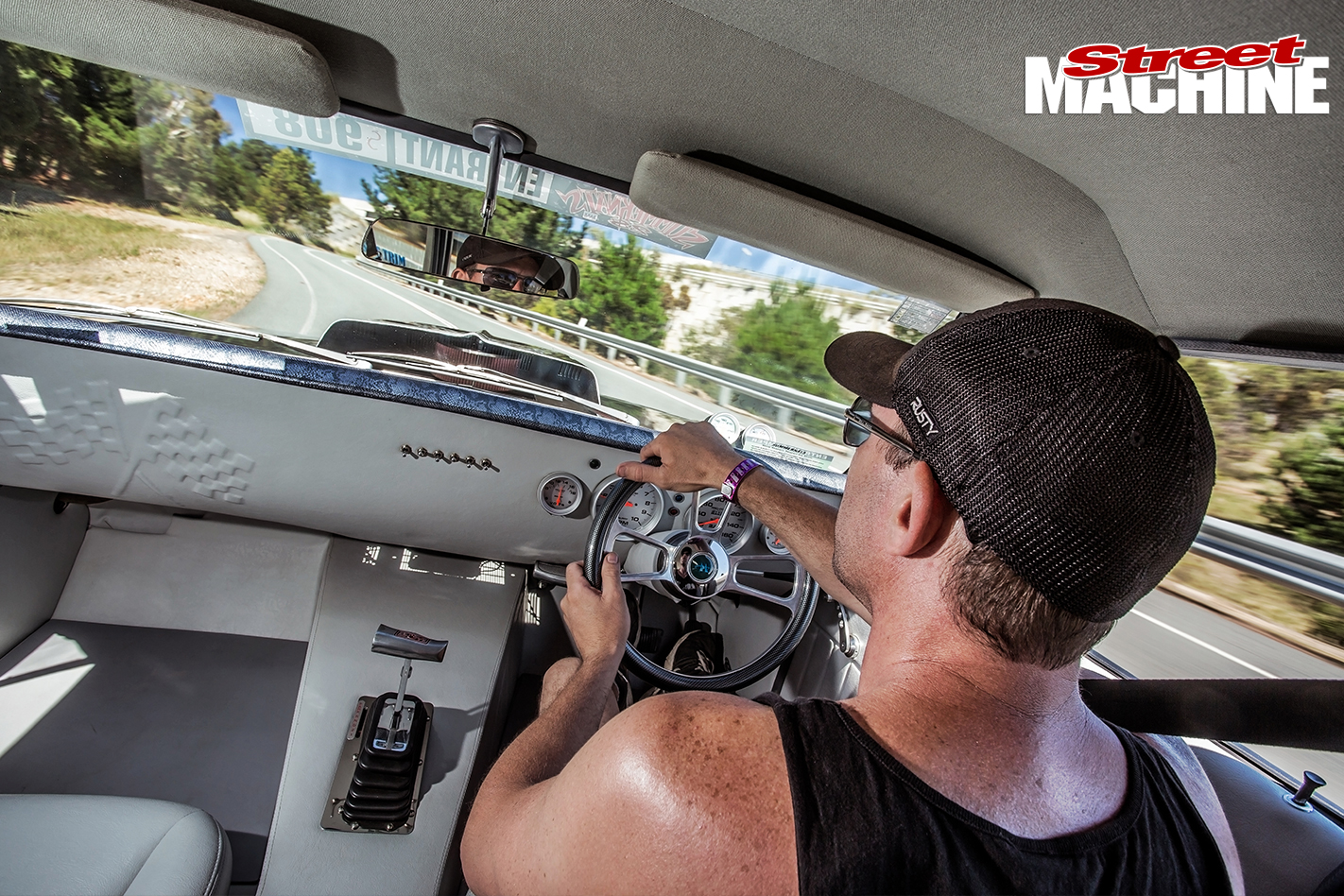 With Matt constantly under the pump at work, the wagon only sees the light of day a handful of times each year, but it has constantly evolved over the 10 years he’s owned it. For that, he’s quick to credit everyone who has had a hand in the build. “The car certainly didn’t build itself. It has taken a lot of time and effort from a lot of different people to make it happen.”