A LOT of people in the modified car scene like to stand out in a crowd: They’re big, loud, colourful and sometimes a little obnoxious – and so are their cars. Andrew Goodwin, on the other hand, is about as far away from that as you can get: quiet, polite to a fault, talented at what he does and an all-round good guy. I don’t draw this conclusion from a half-hour phone conversation either, I’ve known him for a few years now; he’s actually photographed a few cars that have made the pages of SM and SM Hot Rod. 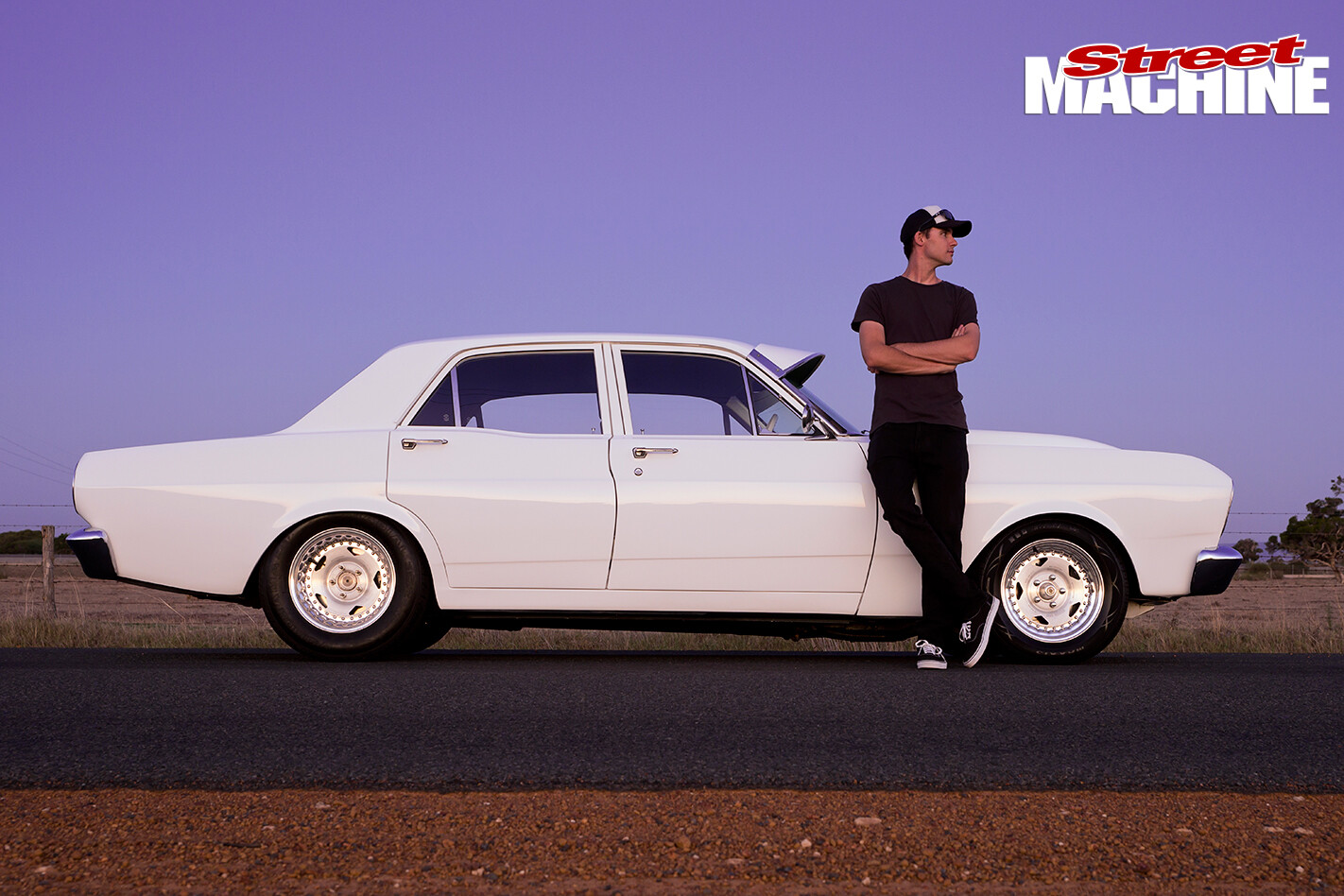 His XR Falcon is much like him, in a sense. Understated and low-key on the outside, but full of surprises when you dig a bit deeper. It started out as your basic povo-pack Falcon 500 with a six-pot, and at some point in its life someone gave it a coat of paint and slapped in a 302 Windsor – then along came Andrew. “I paid way too much for it and it wasn’t really a great buy at all, but I was so set on getting something and especially at that age [21years old] no one could really talk any sense into me,” he says. “I wanted one, I just had to have one, didn’t really matter what the cost was.”

This desire to own an XR grew from a seed planted in Andrew’s mind many years earlier, when he was 15 or so: “I just remember going out somewhere, I was in the front seat with Mum and this Falcon pulled out in front of us. It was night time, but the tail-lights were unmistakable. It just looked so cool and just stuck in my head for a bit. 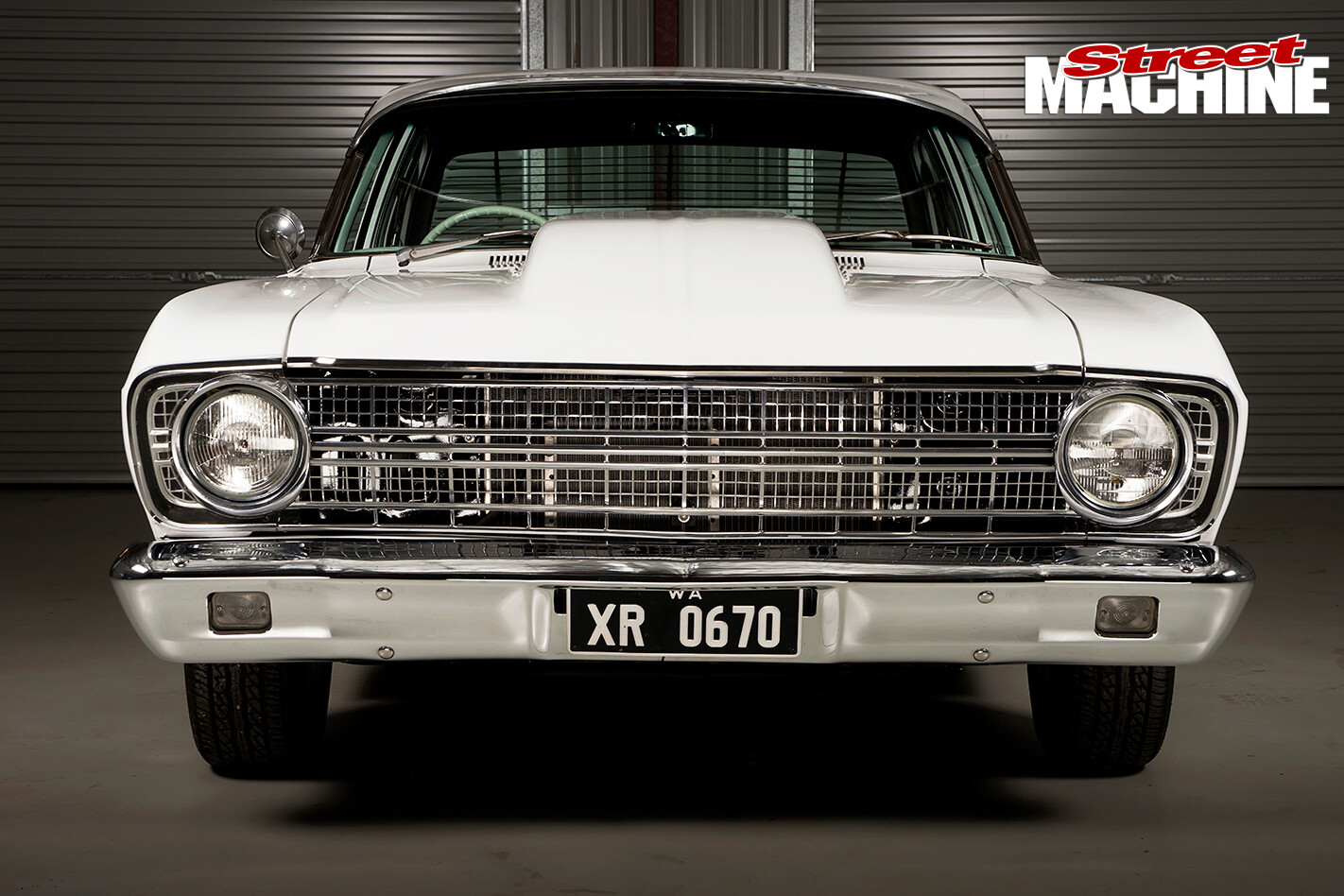 “My family wouldn’t let me get a V8 Falcon for a first car, so I messed around with late-model Falcons for a while. I had one five-litre ED that we pulled apart, resprayed and put a motor in, but it was still not what I really wanted. I wanted something older, like what was in the magazines that I’d been buying for years and years.”

The stark white exterior, sun visor and venetians don't give away too many hints, but the reverse-cowl scoop is a sure sign something's happening under the bonnet

So when he finally did get his hands on an XR, Andrew was pretty chuffed, and cruised it around for about 12 months. He did the right thing and got it regoed with the V8, but there were a few things that bugged him about it – mostly a really shitty interior, which included high-back buckets out of an XC, a paint job that wasn’t that great, a dent in the passenger door and a bit of rust around the back window. It was time to pull her off the road to have a little bit of TLC spent on it – aka Truck Loads of Cash!

The car was stripped down and sent to Dave at Gas 78 for a fresh coat of white paint. There’s no fancy name for it; it’s straight white tinter. The choice was easy for Andrew: “My two favourite colours are black and white.” So if you look at the car as a whole, that’s pretty much all you’ll see on it; a little bit of silver and chrome here and there, but otherwise, you got two choices. With the car back from the painters, Andrew soon realised he couldn’t put all the shitty old stuff back on. All of the rubbers and every piece of glass in the car is brand new, and thanks to his uncle flogging him an XT Fairmont parts car for 500 bucks, Andrew had a decent set of seats to chuck into the front of the Falcon. It was off to Canning Motor Trimmers to get the interior re-covered in black vinyl, to a pattern Andrew specified.

Hilborn EFI, coil-packs and the huge sprint-car air cleaner lets you know it's all business under the hood

What makes this car step away from all the other plain XR Falcons in the car park is what’s under the bonnet. It’s still your basic 302 Windsor, but this one is supplied by Dart and can be punched out 185thou, so Andrew went straight out to 165thou, which, combined with the K1 forged 3.4-inch stroker crank, nets 371 cubes of high-winding Windsor goodness. There are also K1 forged rods, RaceTec forged pistons and a Bullet solid-roller cam with a total lift of 0.696in and 256/259 duration at 50thou.

A Dart block, topped with CHI Clevo heads, punched out to 4.165 and filled with 3.4in K1 forged stroker crank all adds up to 371 cubes of small-block Ford goodness

A set of CHI 3V Clevo heads have been adapted to the block to create a Boss motor of sorts, with the gap between the heads filled with a one-off Hilborn EFI intake that was cast to suit the dimensions of the block and head combination. It wasn’t the cheap option, but it does make for a very interesting engine bay, especially with that giant air cleaner mounted on top. If you’re thinking that it looks like it belongs on a sprint car, well, you’d be right. Andrew enlisted the expertise of Jamie Staltari of Shiftkits Australia to sort out all of the electrickery in the car. The EFI hardware is impressive, but it ain’t worth diddly if you can’t get the software to talk to it. You’ve probably spotted the AEM coil-packs located on the rocker covers, and hopefully recovered from the fainting spell you had when you thought it was an LS1, but don’t worry, the distributor is still out the front – sort of.

The standard knobs and tiller are a nice touch, even though it's completely updated, it still looks like an old car inside

A five-litre AU Falcon motor supplied the cam sync sensor, which combined with the crank angle sensor and Megasquirt ECU gets the fires burning. A set of custom four-into-one extractors with one-inch primaries was fabricated at Cronic Customs – who also did the custom dash and steel crash pad – and then Andrew fabricated the twin three-inch system at home, with some help from a mate who is handy with a TIG welder. The rest of the driveline is pretty stout as well, with a fully manualised C4 shipped in from Dynamic Racing Transmissions in the US. A bit of local content filled the gap between the motor and ’box, with an Allfast converter built pretty tight but with a 5000rpm stall. “It drives like a normal car, but when you stand on it, it flashes up to 5000 and then shit gets real,” Andrew says. Phil Purser at Final Drive sorted out the nine-inch to finish off this bulletproof combination, which had a pretty good workout at Gazzanats WA. “I was going over the line at 7700rpm in top gear during the Super Skids,” Andrew says, which by my calculations using the 3.9 diff ratio and 245/60/15 rear tyres, equates to just over 156mph. Yep, it can also be a smoke machine. 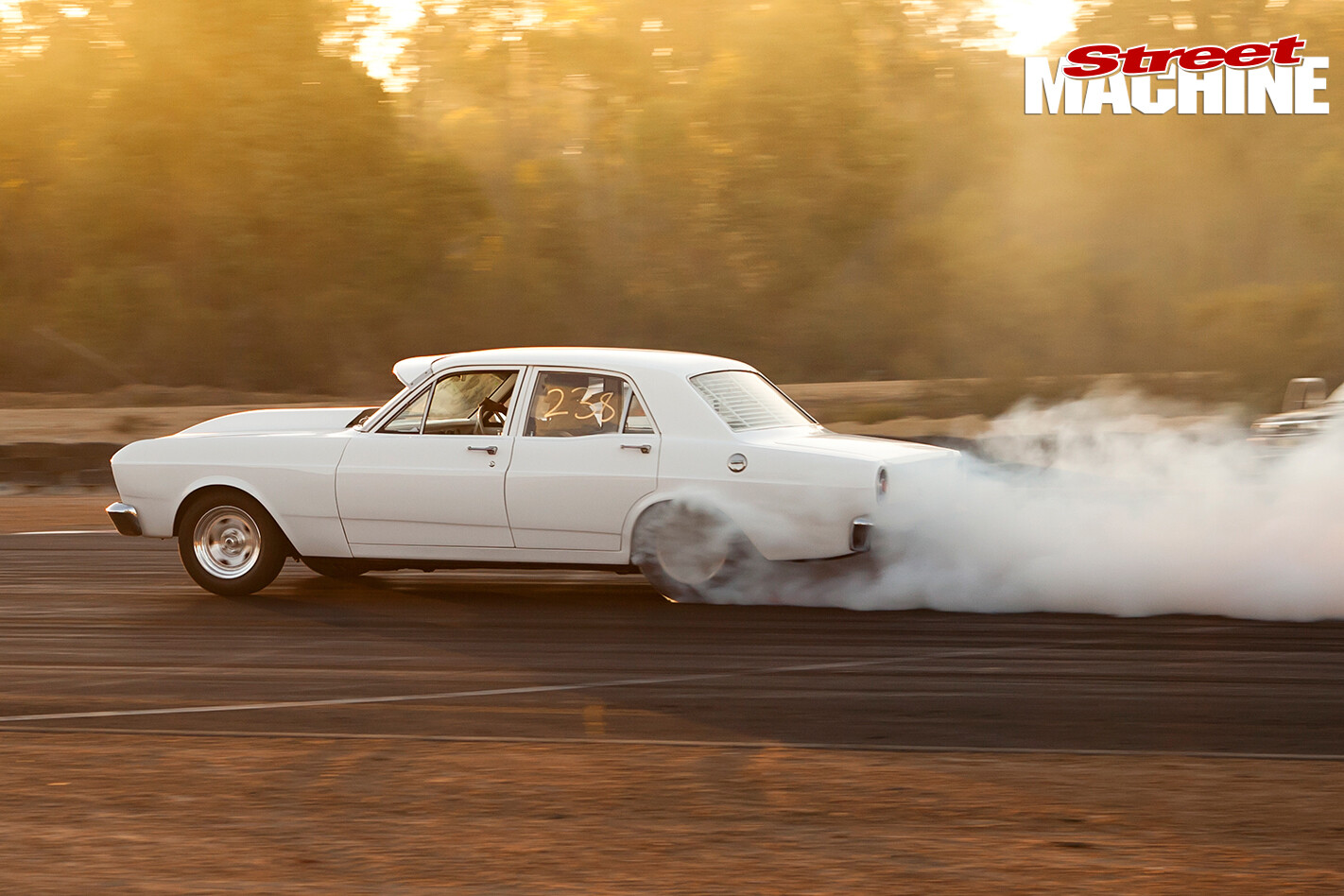 The car doesn’t fit into any style, with its sun visor and venetians in contrast to the fat rears and reverse-cowl scoop, yet Andrew has somehow pulled it all together. He’s done it just in time as well, as there’s a new addition soon to arrive, and it’s a boy! Time to start thinking about where to drill that hole for the baby seat anchor.