AH, THE British. There’s not much that they can do that we can’t do better. Whether it comes to sport, weather, dental hygiene or cars, we’ve got the edge over the mother country. 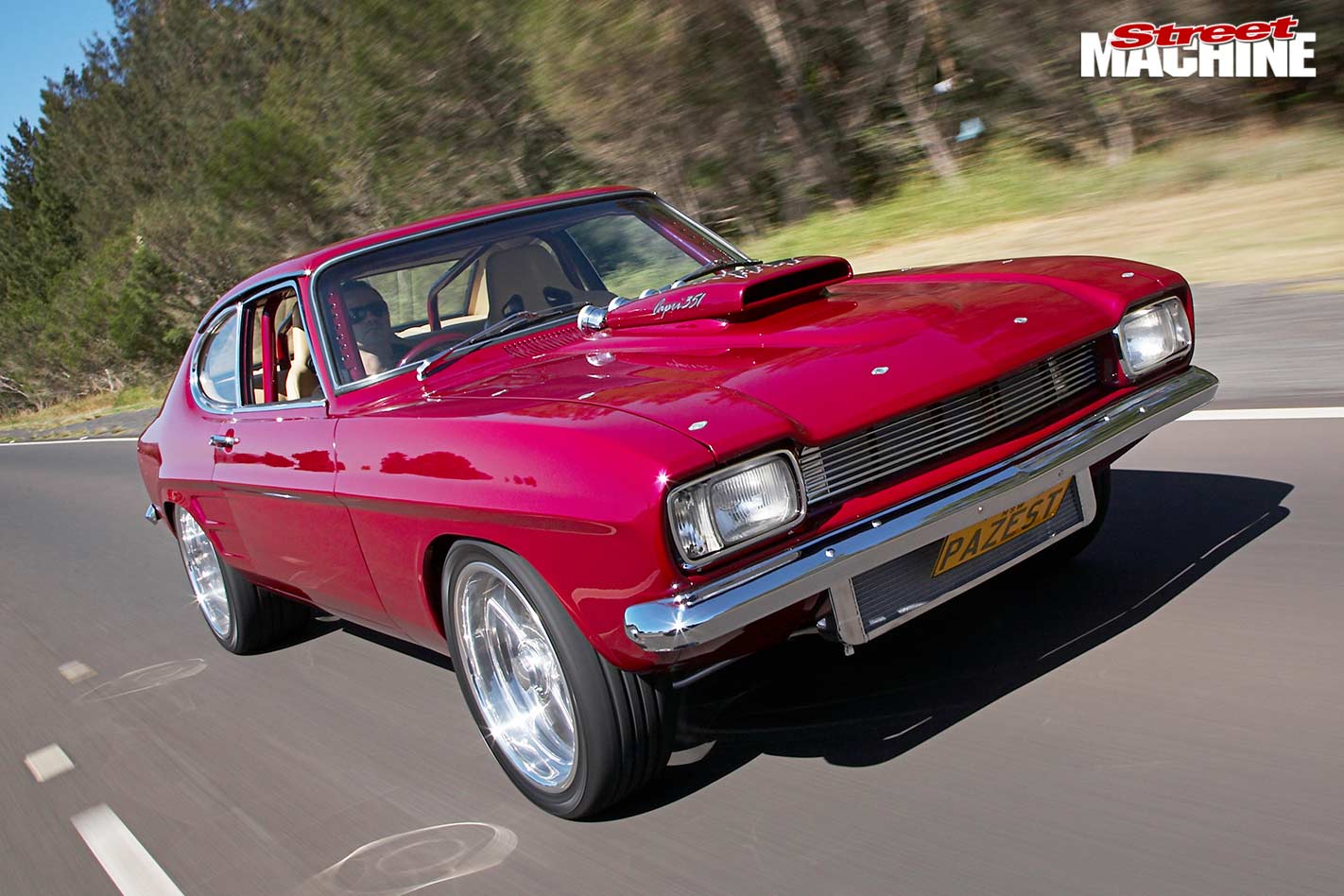 On the whole, British cars are bland and underpowered. There are, however, exceptions to every rule, and the Ford Capri is one car of Pommy origin that we Aussies have welcomed with open arms.

The Ford Capri has cemented its place in Aussie street machining thanks to the inordinate number of them that have had thumping bent eights stuffed between the strut towers by forward-thinking individuals, otherwise known as hoons. 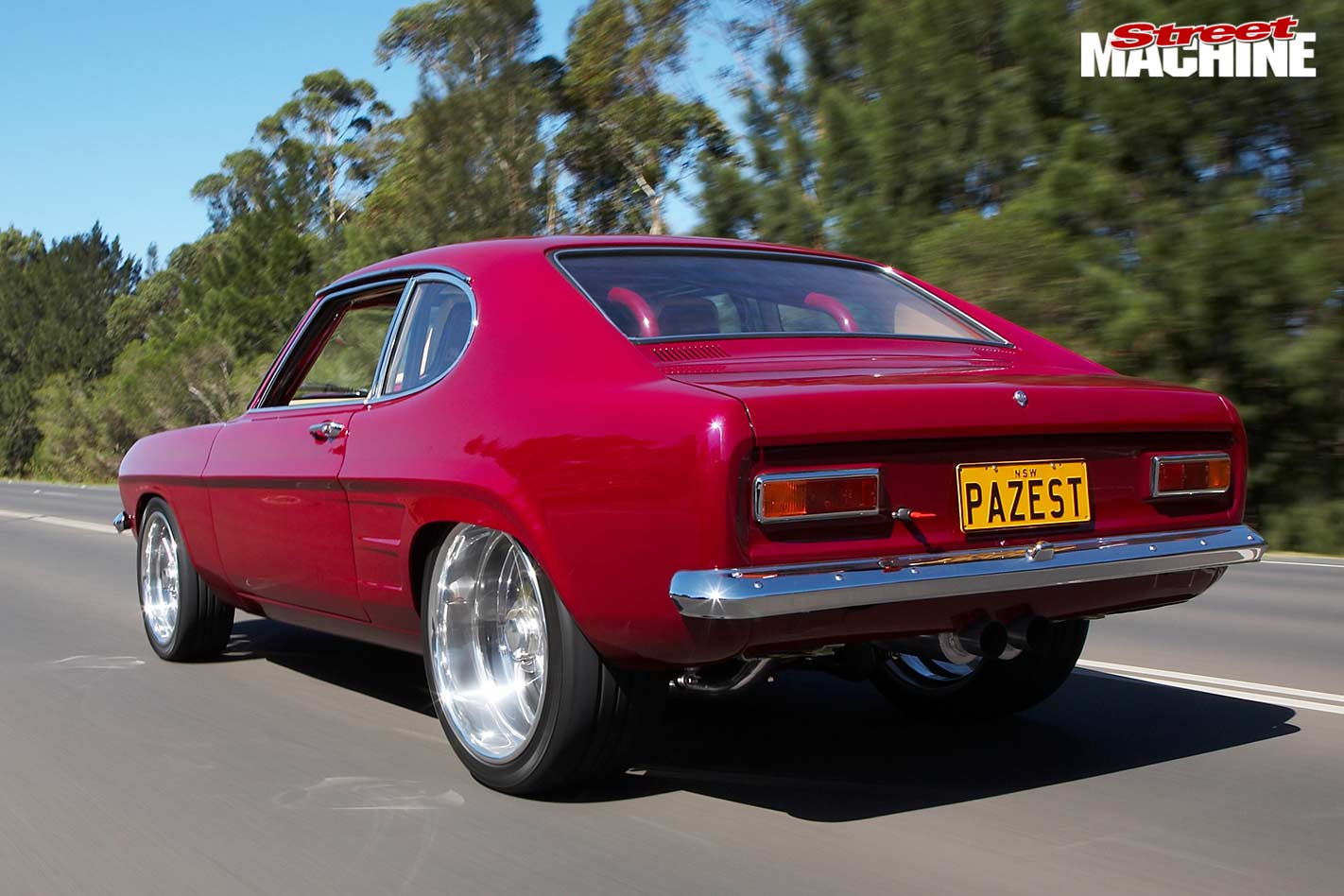 Michael Galea is one such individual, and his example is one of the best in the country — it even barged its way into the Elite Top 20 at Summernats 22.

If you think the car looks strangely familiar, you may be onto something. It’s graced our pages once before (Sept/Oct ’00) but Michael modestly says the Capri was “just a tough street car” back then.

Maybe so, but it was still good enough to make the Top 60 at Summernats 13. It probably would have remained a tough streeter too, except Michael got power-hungry and dropped a 378ci stroker in the old girl soon after the ’Nats.

“With the new motor I snapped an axle and smashed the centre,” he says. “That’s when we decided to tub it, then respray it and it all went from there.” That was seven years ago. 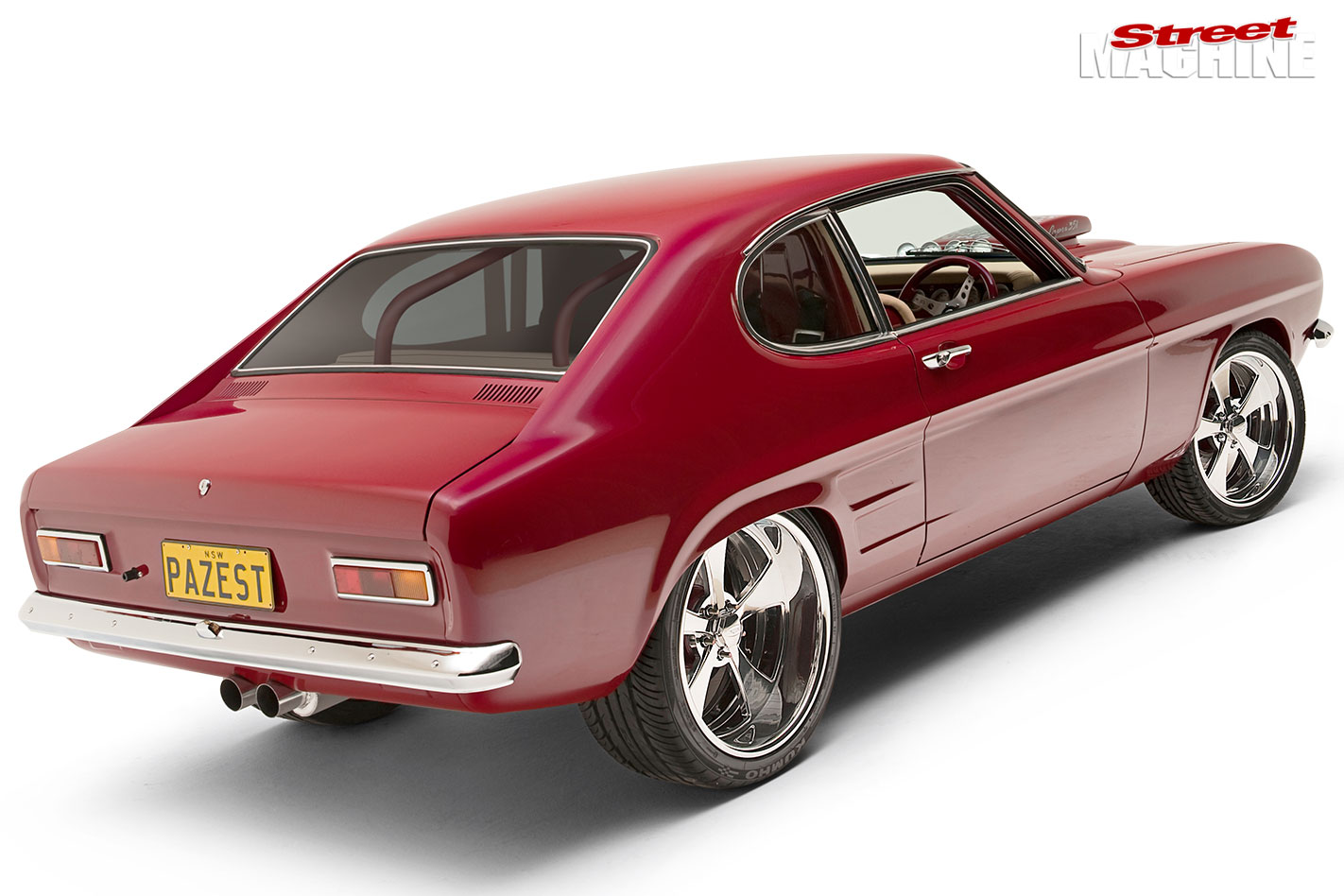 Michael really means that ‘we’. This Capri is the product of some committed and talented friends, and he can’t thank them enough for their hard work.

“Ninety-five per cent of the people who worked on the car are good mates, and it’s as much their doing as mine,” he insists. 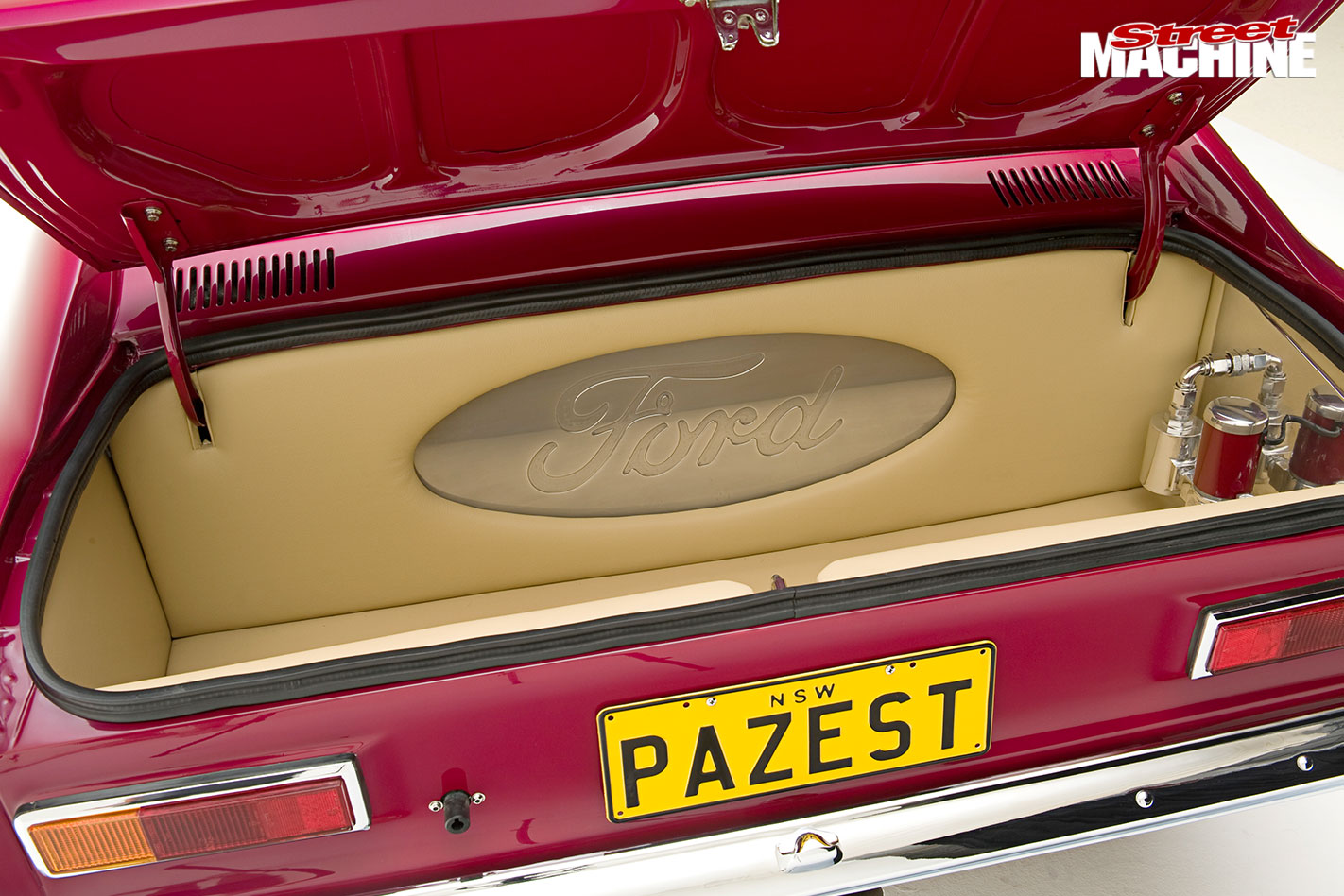 Tucked behind the boot partition is the tail of the ’cage. That and the custom aluminium fuel tank were built by Michael and his mate Adam at Raceline Fabrications. The partition folds down when you need to fill the tank; the battery is back there too

It’s easy to see how they spent seven years. PAZEST hosts countless custom mods that add up to a supremely detailed ride that’s as tough as nails.

Starting with the body, the fuel filler was shaved, the reverse lights were removed, the rear beaver boxed in, and the rear wheel-arches modified to accommodate those massive 20x10 Dragway rollers. 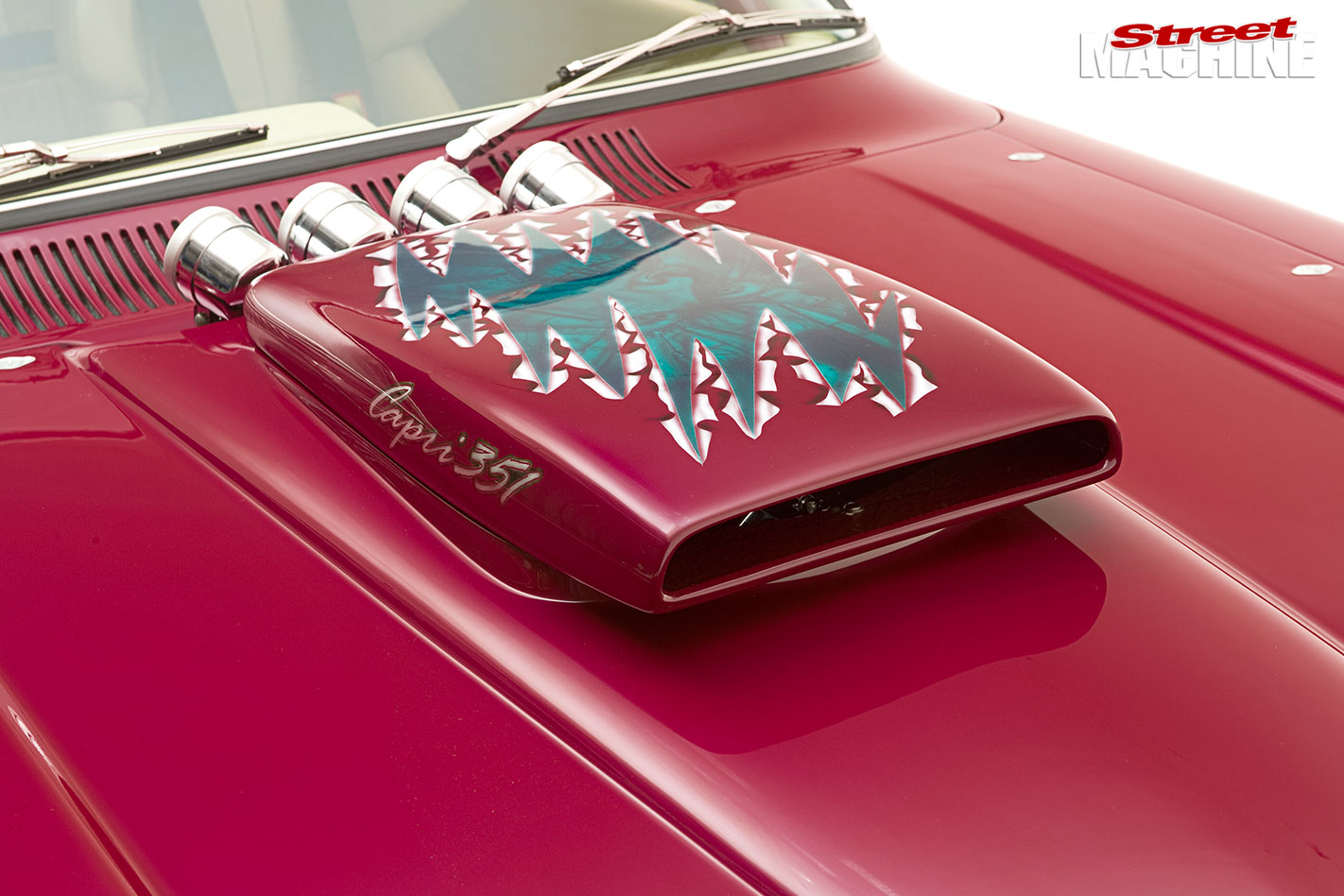 Undo the Dzus clips, yank the bonnet and you’ll do well to spot a single component that hasn’t been messed with. The undercarriage has also been completely customised, smoothed, painted and detailed, while the entire exhaust system and even the leaf springs have been ceramic coated.

The engine was purchased complete, with about 1000 clicks on it, claiming 550hp. Displacing 378ci, the Clevo features a COME Racing stroker kit, 2V closed chamber heads with 4V exhaust valves and a custom-ground solid stick. Induction-wise, a Holley 750 double pumper sits atop a Funnelweb high-rise inlet manifold, which was match-ported to the heads. 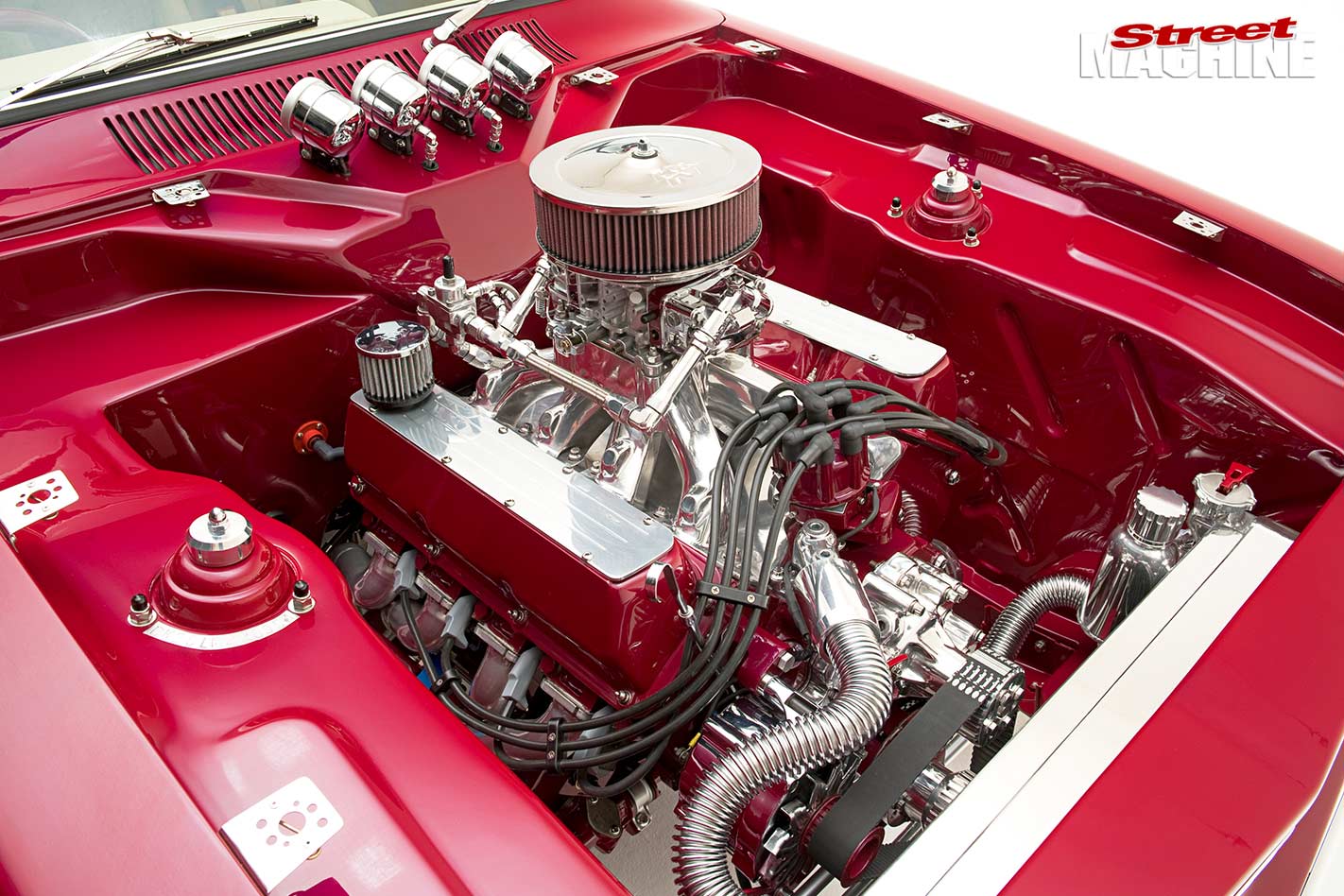 The whole engine is detailed to within an inch of its life, as is the toughened C4 auto that backs it. Predictably, the third member is the ever-present Ford nine-inch, albeit with the addition of some aftermarket goodies aimed at limiting any further failures like the one that kicked off the build in the first place. 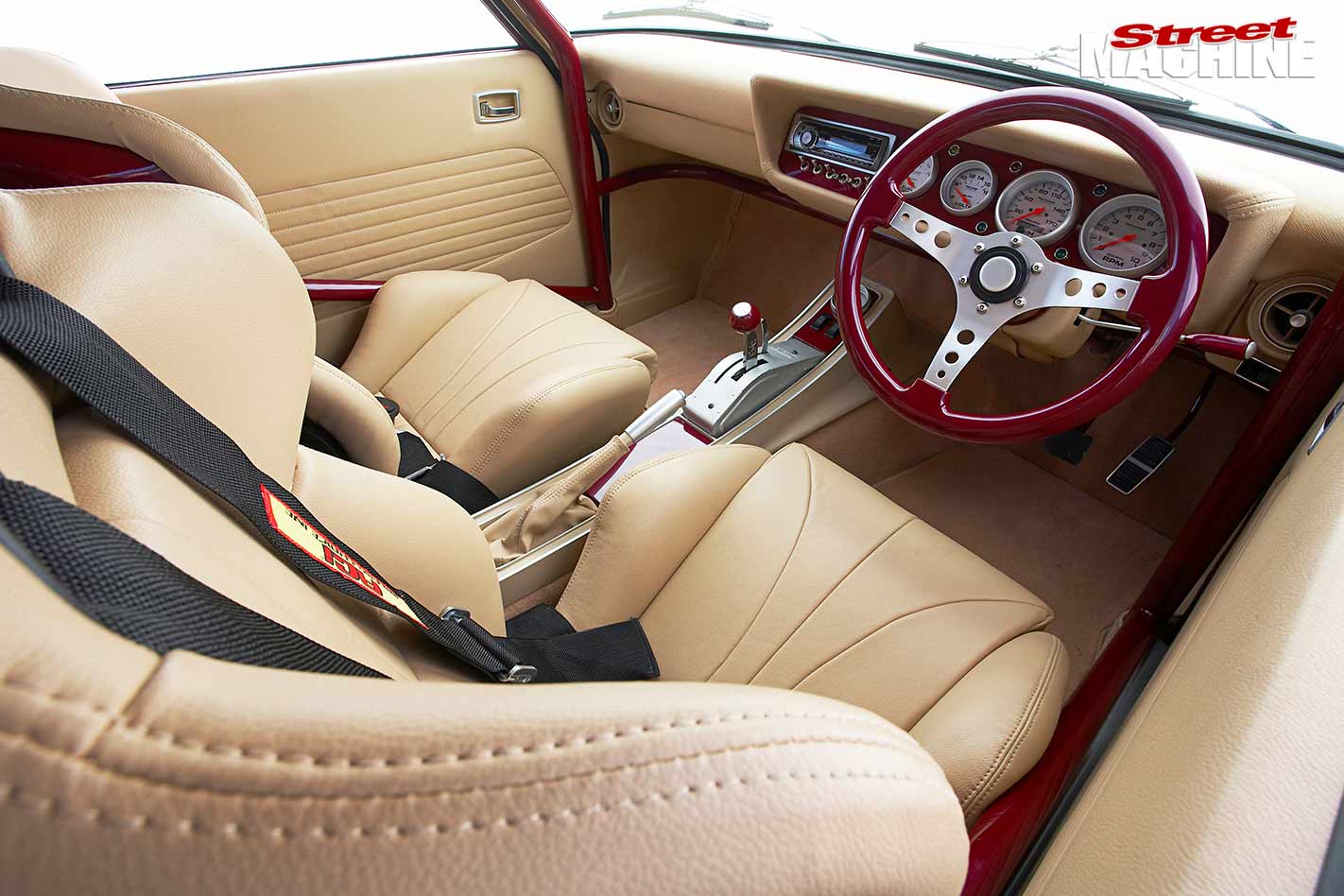 In its first incarnation, the Capri was a tough steeter, with a big Auto Meter tacho and race buckets. This time it's more subtle. The five-inch tacho was ditched for a smaller item fitted alongside an Auto Meter speedo. Custom console houses a B&M Pro Ratchet shifter, power window buttons and an Auto Meter clock

In the cockpit you’ll find a sea of tan leatherette, accented by just the right amount of body-colour highlights. The front seats are Recaros and the rear is standard-issue Capri that’s been customised to allow the tubs to poke up into the cabin. That back seat was one of the last things to make it onto the car before its Summernats 22 debut. “I picked it up from the trimmer at 12:30 on New Year’s Day!” Michael says. Now that’s cutting it fine! 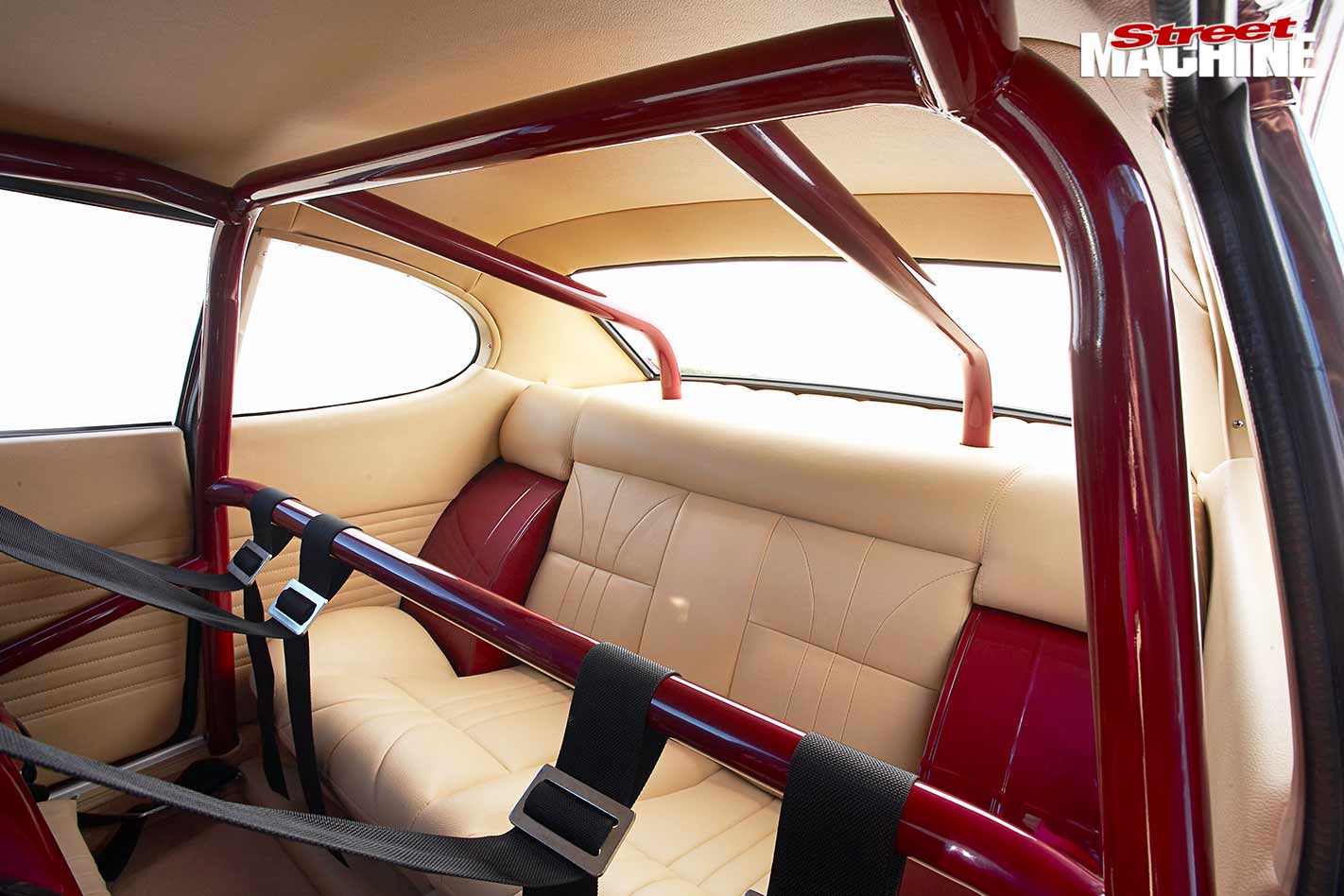 Recaro buckets were carried over but look classier in Coral leatherette. Michael carried the body colour through into the interior but didn’t go over the top, restricting it to the ’cage, wooden tiller, indicator knob, shifter knob and dash and console inserts

“My mates Dave Cornford and Rob Belsito were there right ’til the end of it, putting the finishing touches to the car. We finished it at 5’oclock that morning.”

Dave and Rob own a pair of tidy little V8 coupes — LJ Toranas by the names of XU105L (seen in last year’s Blood Sweat & Gears) and GTR355 (SM, Apr ’05), which are no strangers to the Summernats Elite Hall. 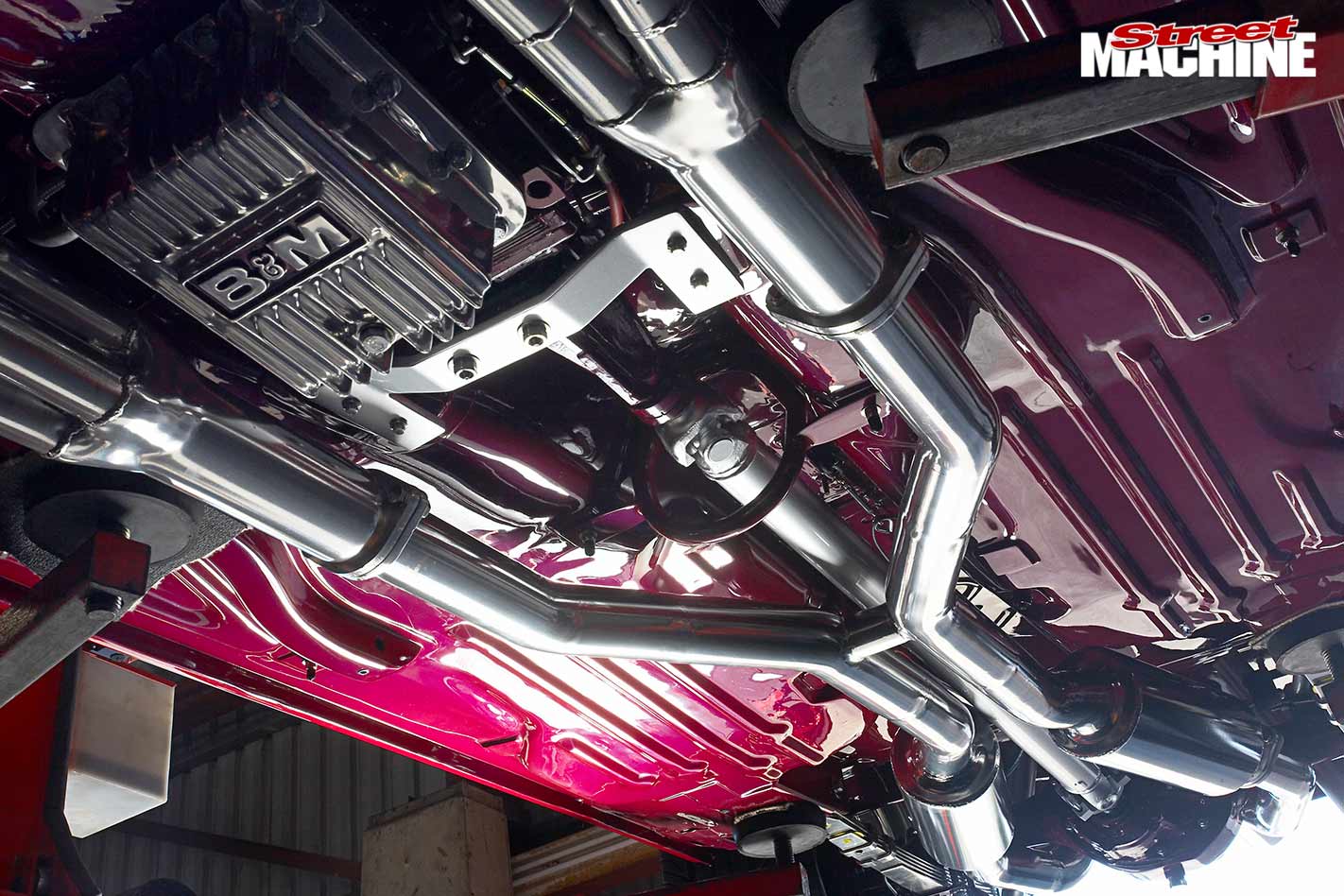 Now that the Capri’s done and dusted, we asked Michael what’s next on the to-do list. “Well I’m getting married soon so that’s the next priority but I’ve started building a three-quarter chassis Capri with a twin-turbo small-block Chev.”

Another one to show the Poms what they could have had. 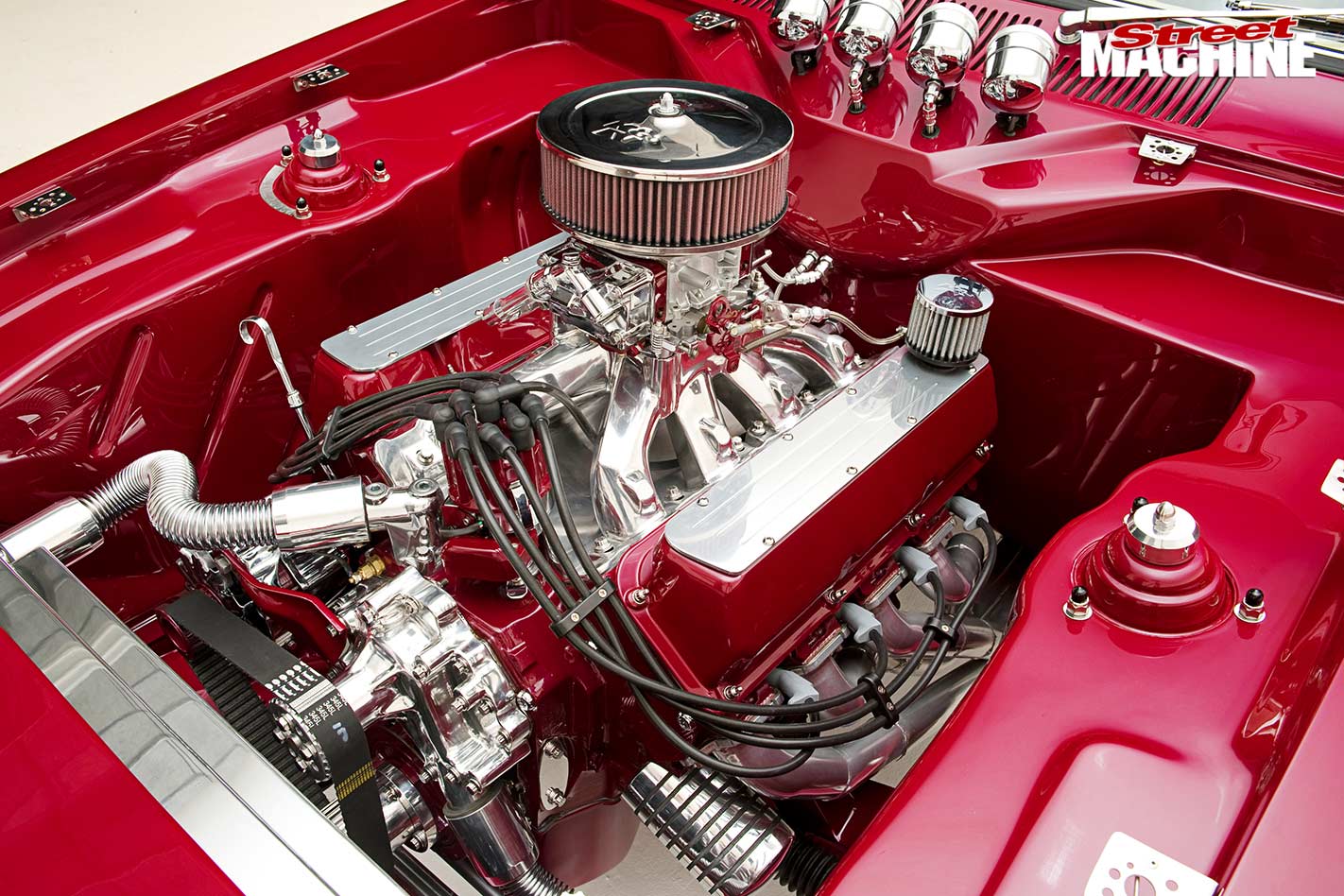 IN DETAIL: THE ENGINE 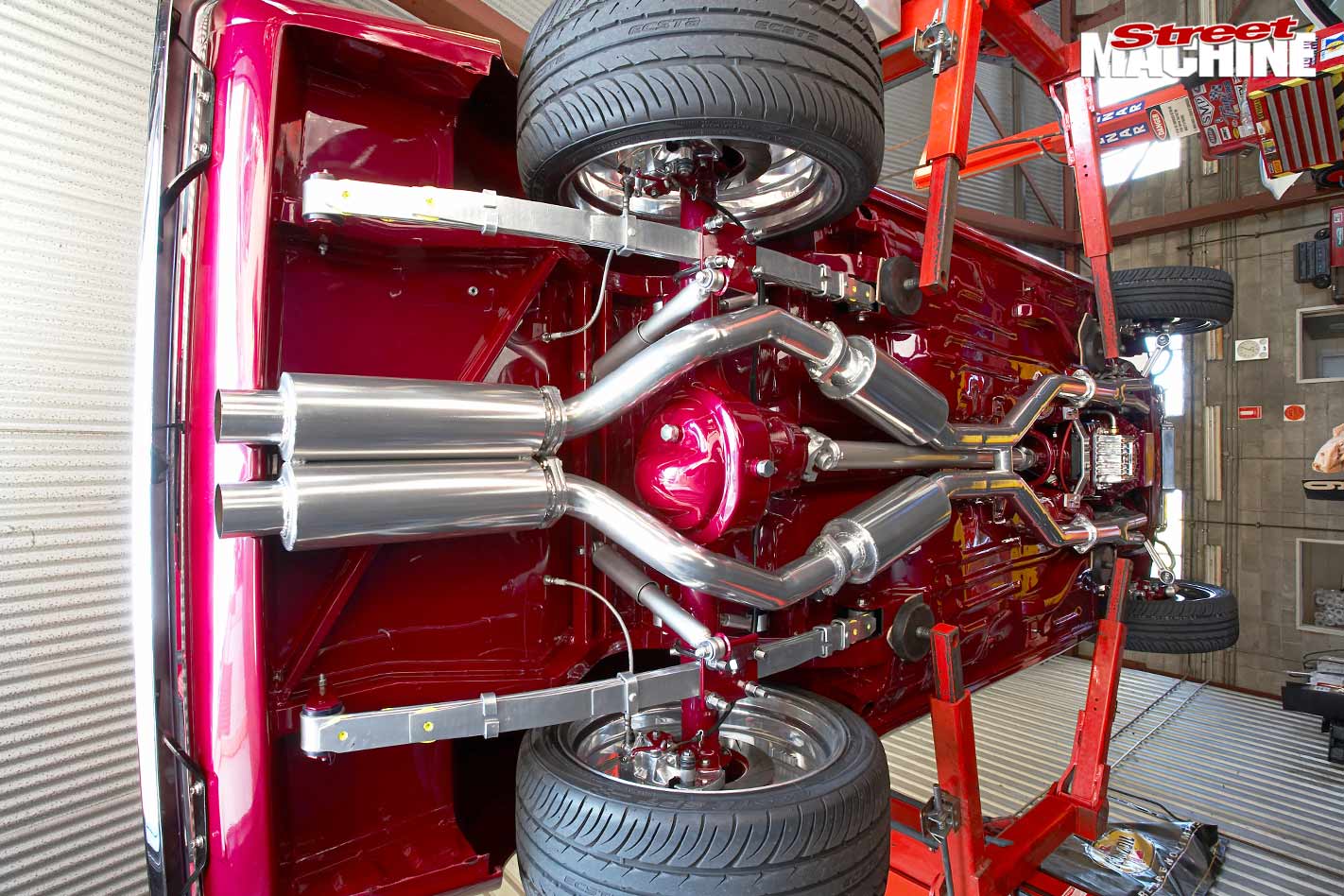 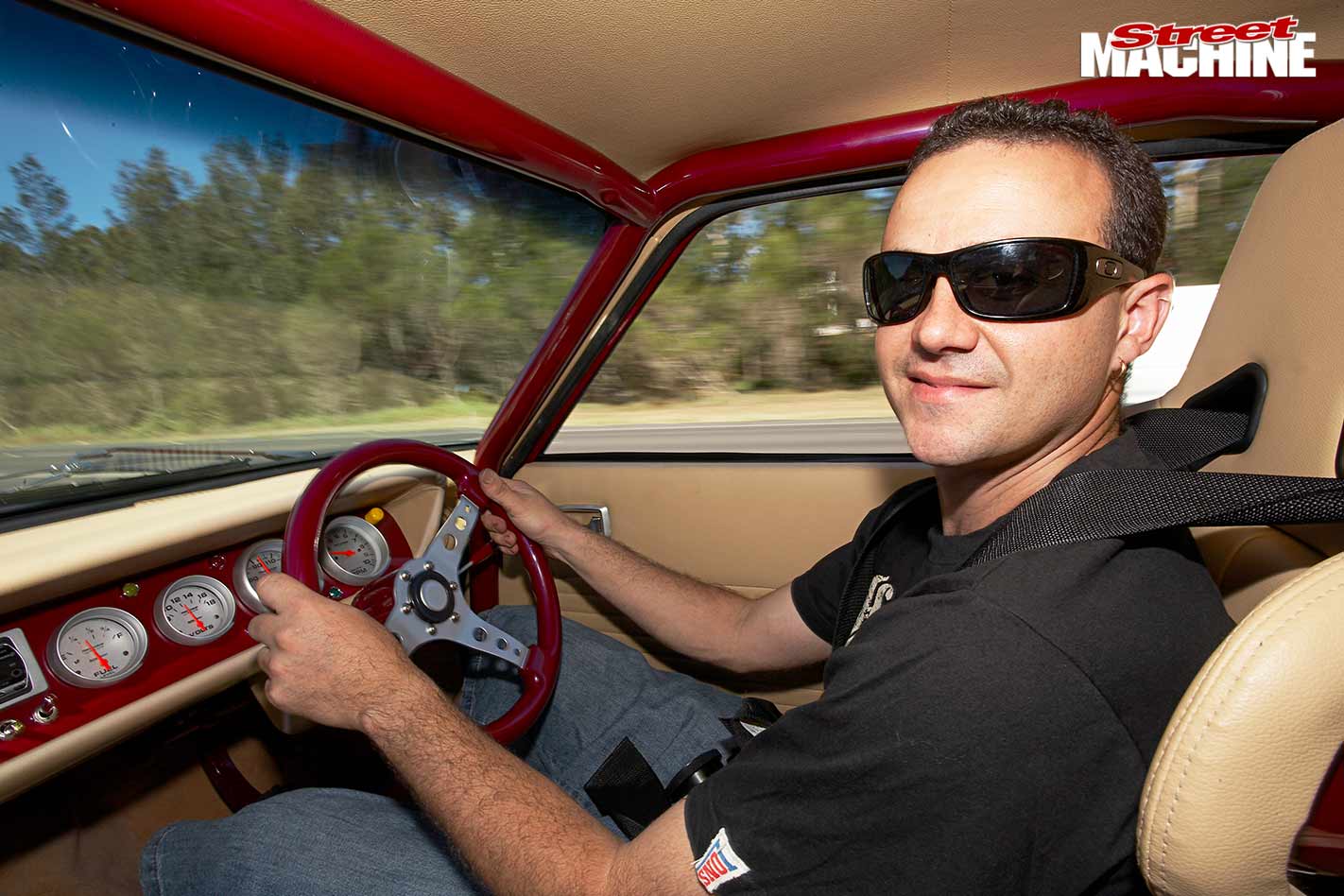