With a set of 22x10 Simmons under the rear and a 383ci small-block Chev up front, Allan El Bayeh’s LC Torana certainly lives up to it’s name ‘FAT LC’

IT’S NOT often that a vow to never again buy a new car becomes the catalyst for a kick-arse streeter. But this is exactly how Allan El Bayeh’s gorgeous FAT LC Torana came into being. “I bought a brand-new E-Series GTS,” Allan says. “Its drop in value after only a short time was horrific. I decided there and then that I’d only put money into cars that hold their value.” 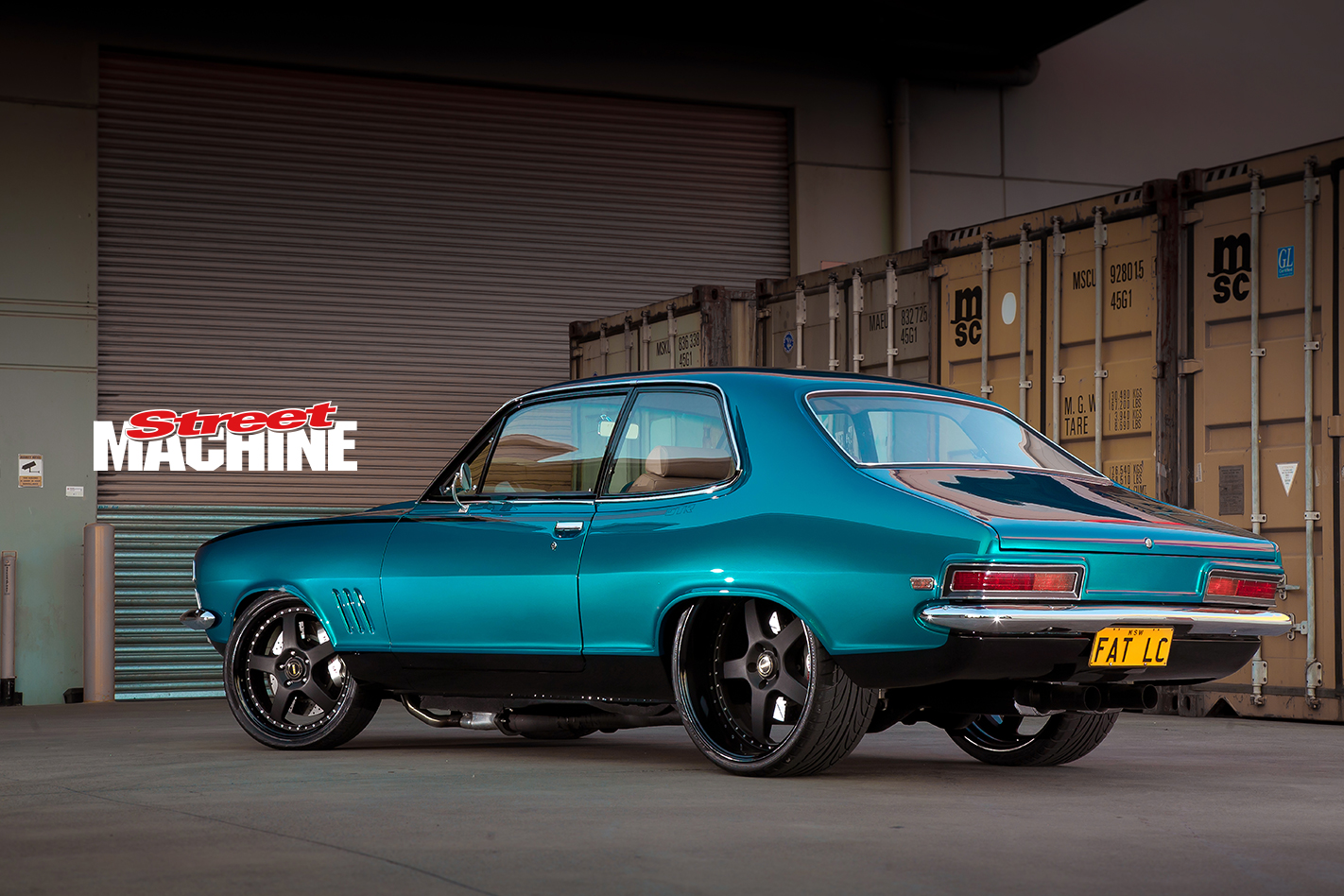 Allan put the word out that he was looking for a suitable investment vehicle. As fate would have it, a cracker LC soon came up that was too good to refuse – the rest is history. Allan promised himself that the car would come together quickly. “I’ve got too many mates with unfinished projects,” he says. 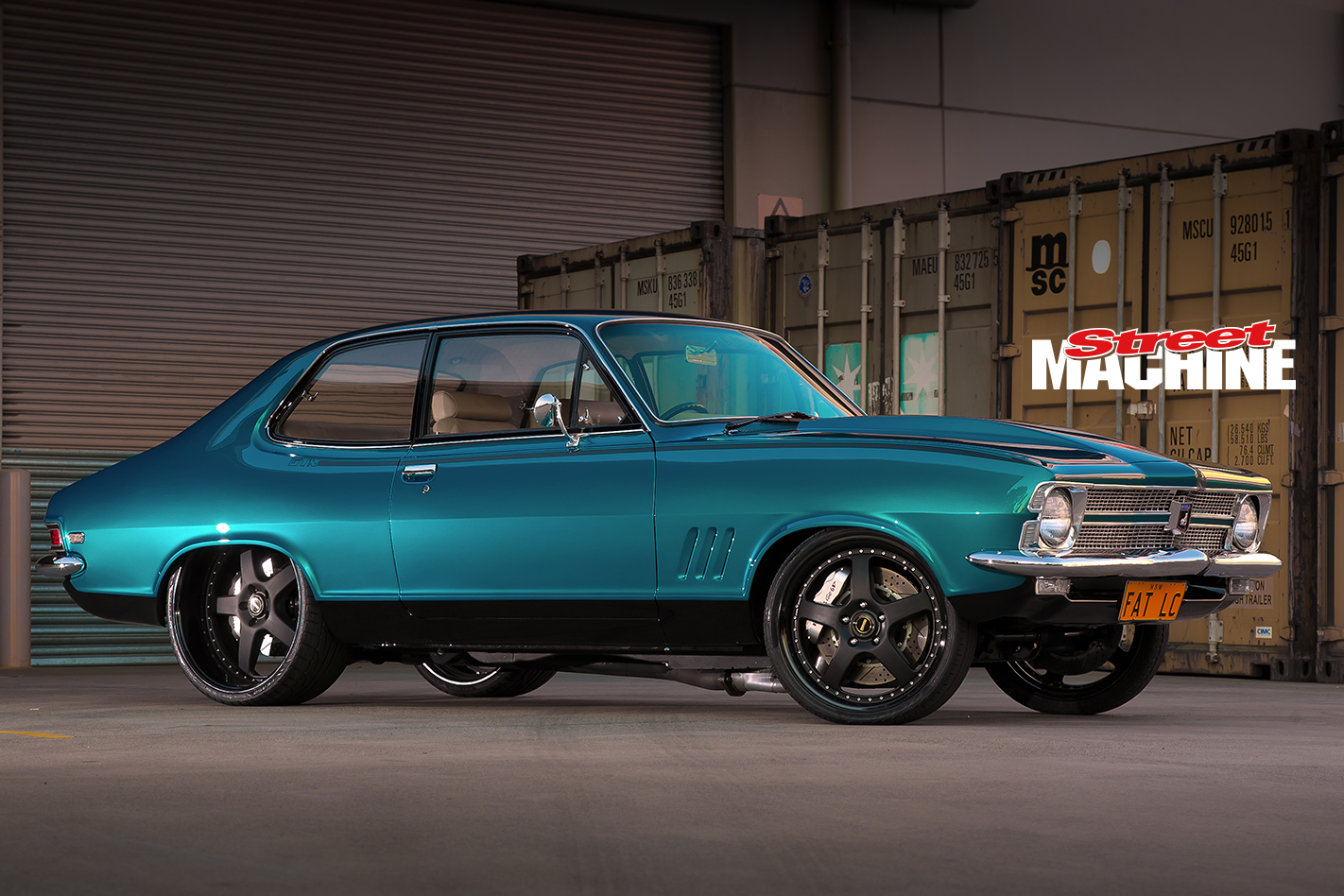 To get things cracking, he teamed up with Sydney fabrication and engine-building powerhouse, ProFlo Performance. Allan and ProFlo’s Paul Sant kicked around a host of ideas and agreed the Torana should be wild, yet factory-like. How do you get a factory-style ride to look wild and make a statement? Add 22-inch wheels, of course! Neither could recall another LC/LJ with 22s, and they liked the idea of being first. 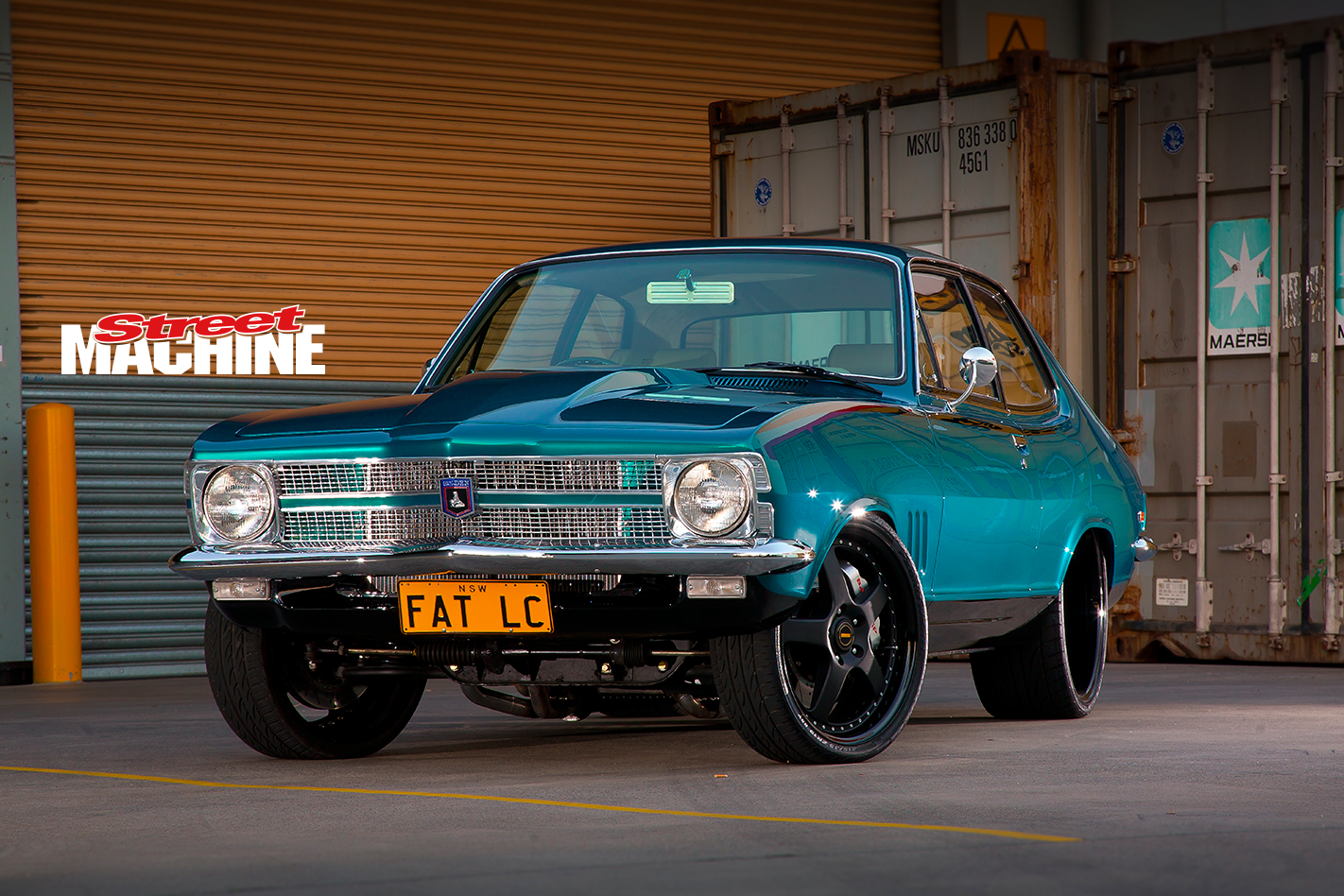 The donor vehicle was engineered for a 350 Chev; however Allan picked it up in a pile of boxes, as it was completely disassembled. The original intention was for a simple tidy-up and reassembly. But Allan’s perfectionist nature soon took over; the only remaining parts now are the shell and motor – everything else is new. 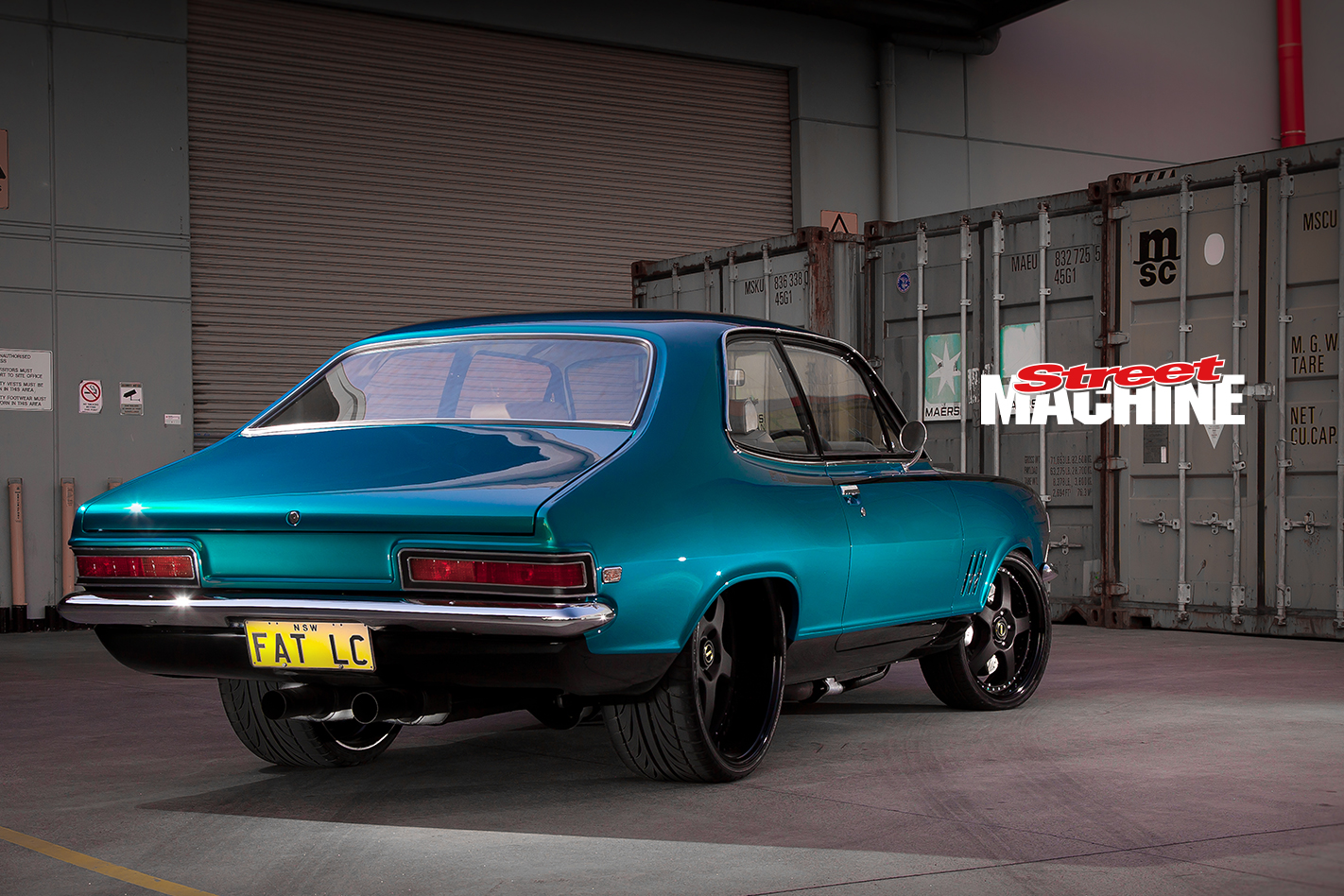 First, the engine was torn down for inspection. Although it was in pretty good nick, it copped several upgrades. It now sports 383 cubes, AFR alloy heads, forged pistons and a Holley 850DP – good enough for 549hp on Westend Performance’s dyno. 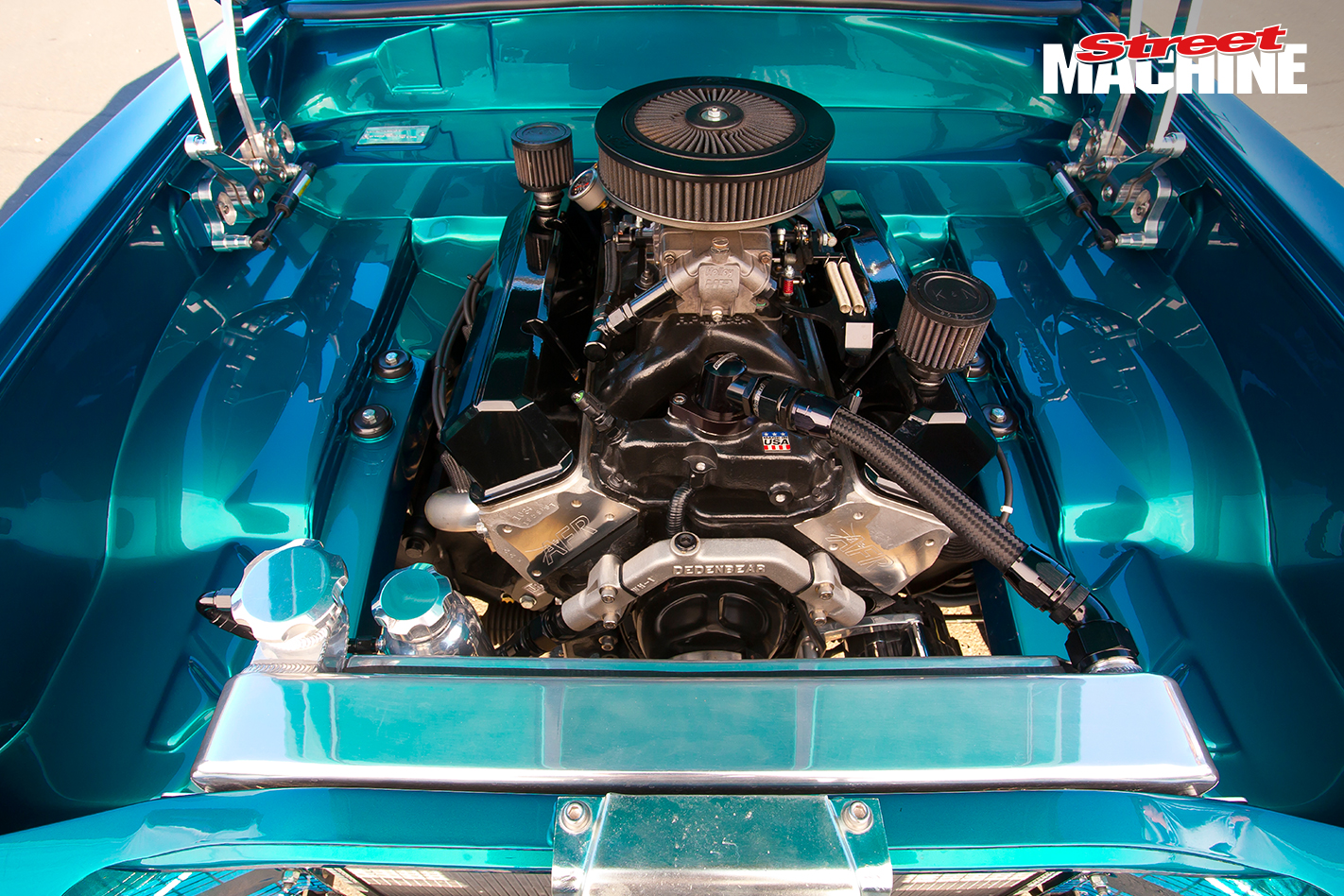 Next up was a fully manualised TH400 by Al’s Race Glides. With a rating of 1200hp, it can handle far more than the current engine can throw at it. “It’s future thinking,” Allan explains. “I’ve done that throughout. Everything is built to last, plus it gives me the option of going racing without being scared of breaking it.” 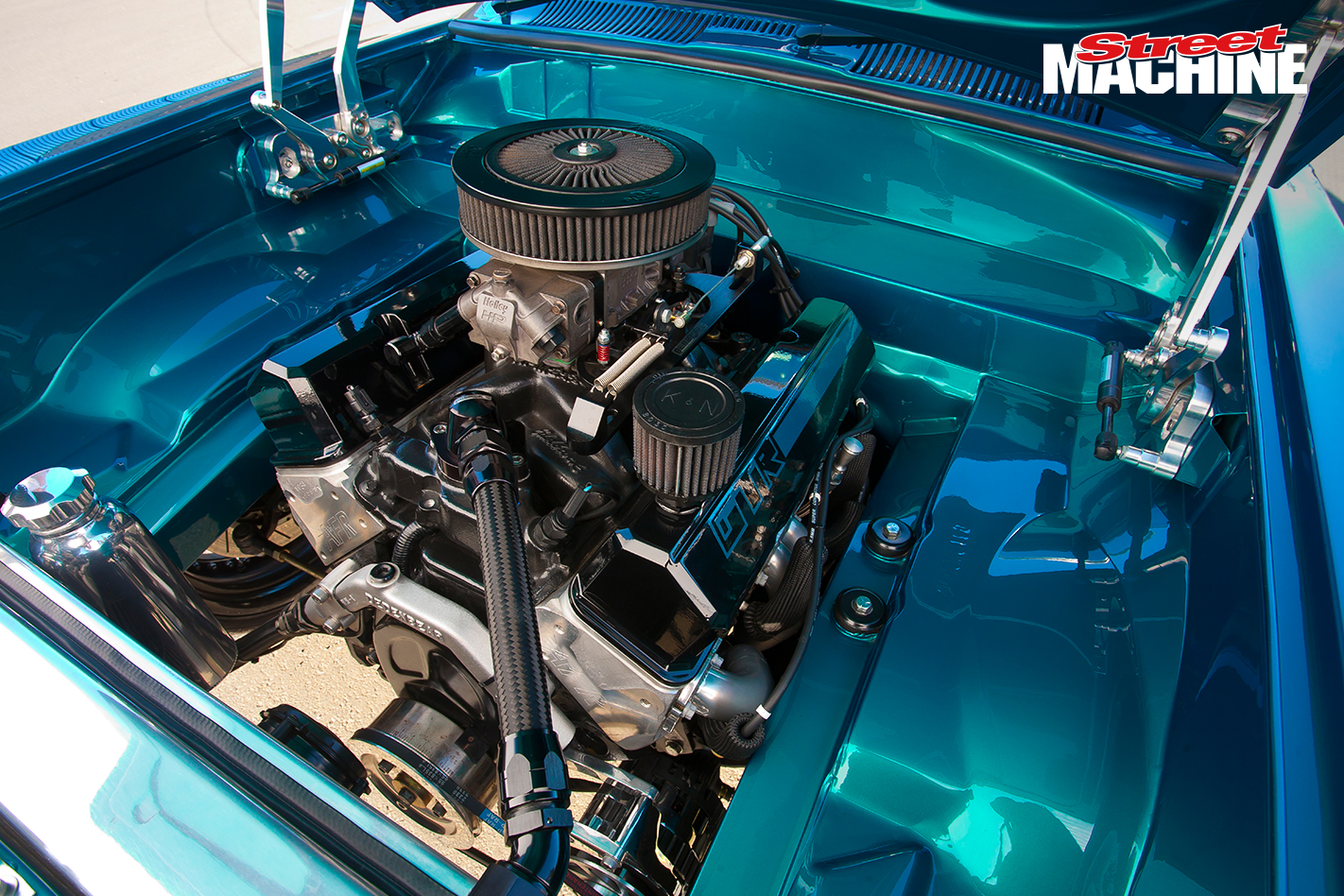 Big wheels require big brakes to fill them, so FAT LC sports huge, six-piston Baers at each corner. The rears feature smaller-diameter pistons for appropriate front/rear bias. With the brakes sorted, offsets could then be measured to allow Tempe Tyres to piece together the imposing 19- and 22-inch Simmons rims. 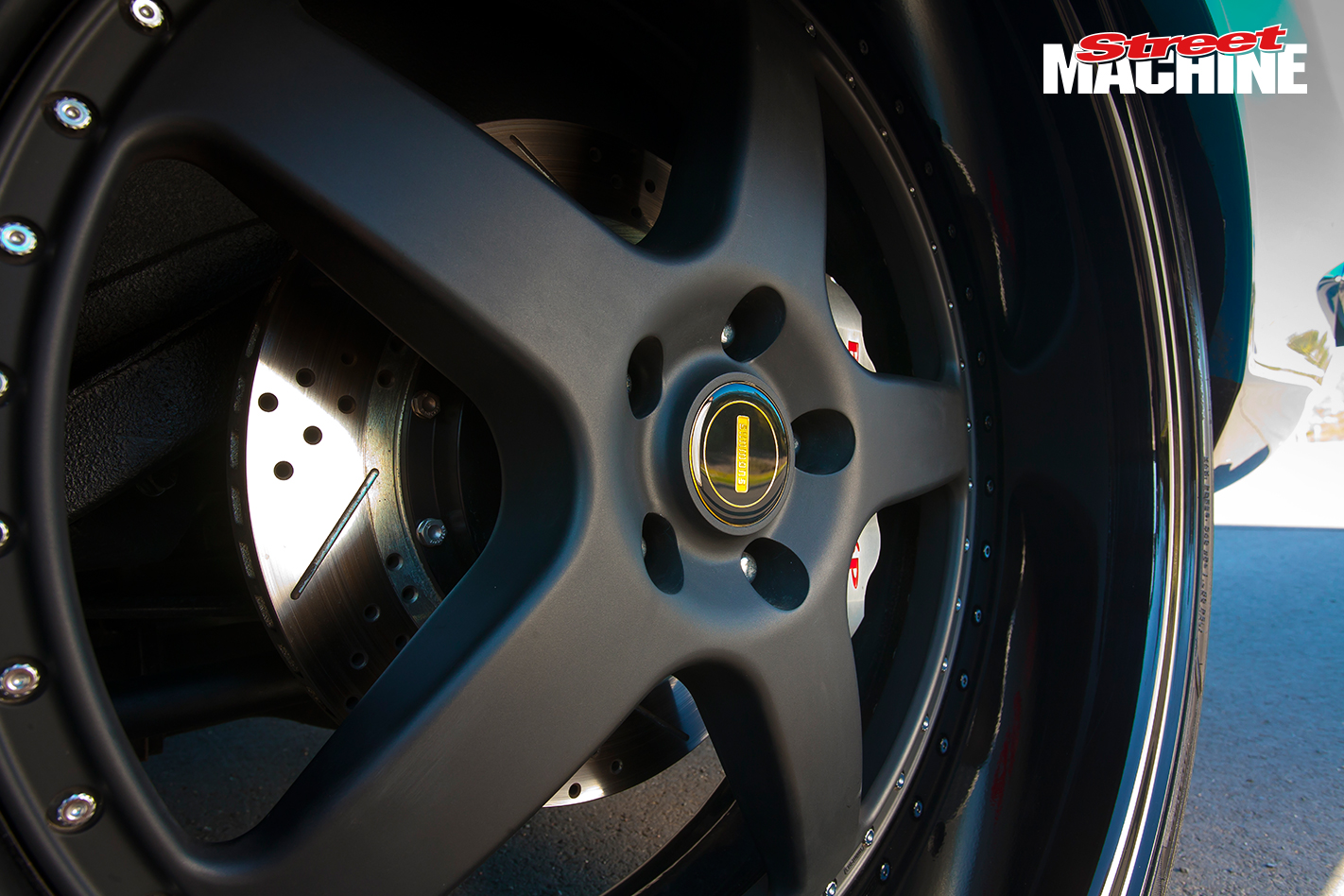 Shoehorning 22x10s under the rear haunches required less fettling than expected. The wheel openings were extended and the rear was mini-tubbed. ProFlo then fabricated tubular control arms that bolt up to the factory pick-up points, with coil-overs suspending the extremely narrow sheet-metal nine-inch. Other ProFlo fab work included reworking the tunnel, relocating the wiper motor inside the cabin, moving the brake booster into the boot and cleaning up the engine bay. 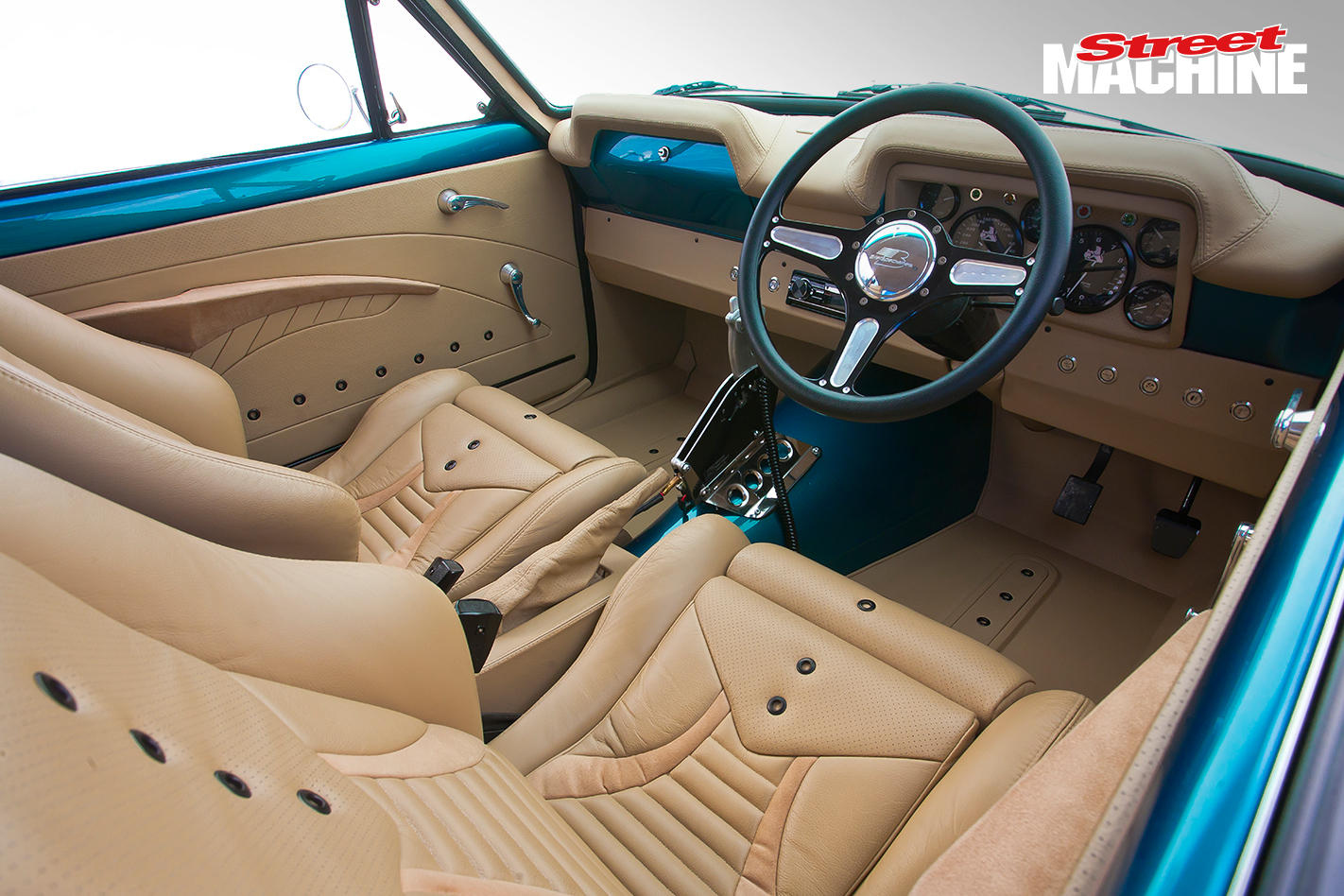 Another Sydney powerhouse, Custom Body Works, was commissioned to create that arrow-straight body and lay on the amazing teal paint. From the outset, Allan was drawn to the unique House Of Kolor hue, which Danny from Custom Body Works has tweaked slightly. Nathan Jones from HOK Australia says FAT LC has certainly popularised the colour: “After debuting at MotorEx, we immediately began receiving requests for it.” There are few bigger accolades than inspiring other builders to follow your lead. 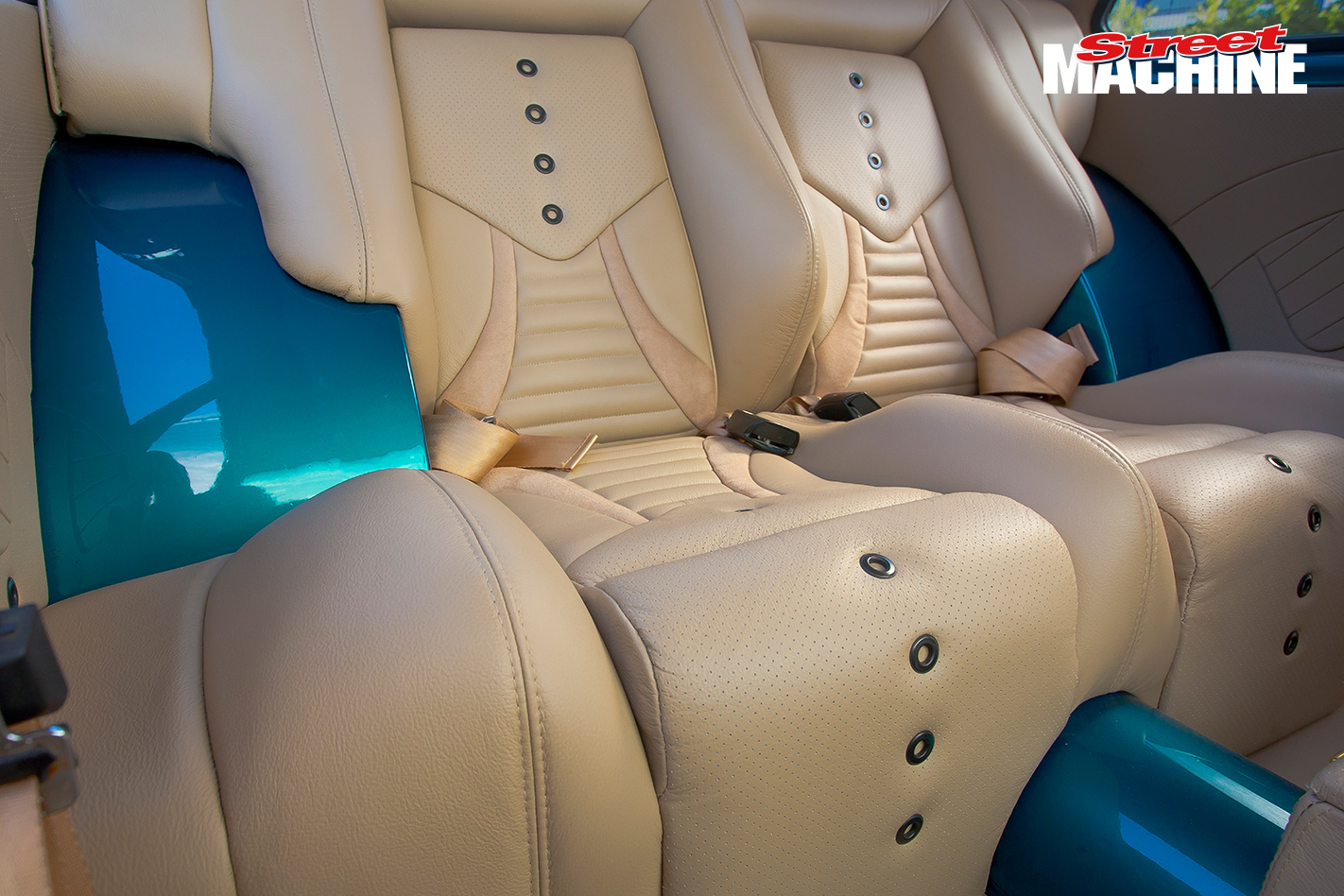 Allan is full of praise for Danny and the Custom Body Works crew, who went above and beyond. Everybody pitched in and put in plenty of late nights, including helping Allan out big-time with final assembly and adding a host of finishing touches. Des Knight of Knight’s Panel Works also chipped in, building the all-steel bonnet and retrofitting the billet HQ bonnet hinges. “For the last couple of weeks of the build, it was all hands on deck,” Danny admits. “Before this, Allan was just a customer; we’re real close friends now.” 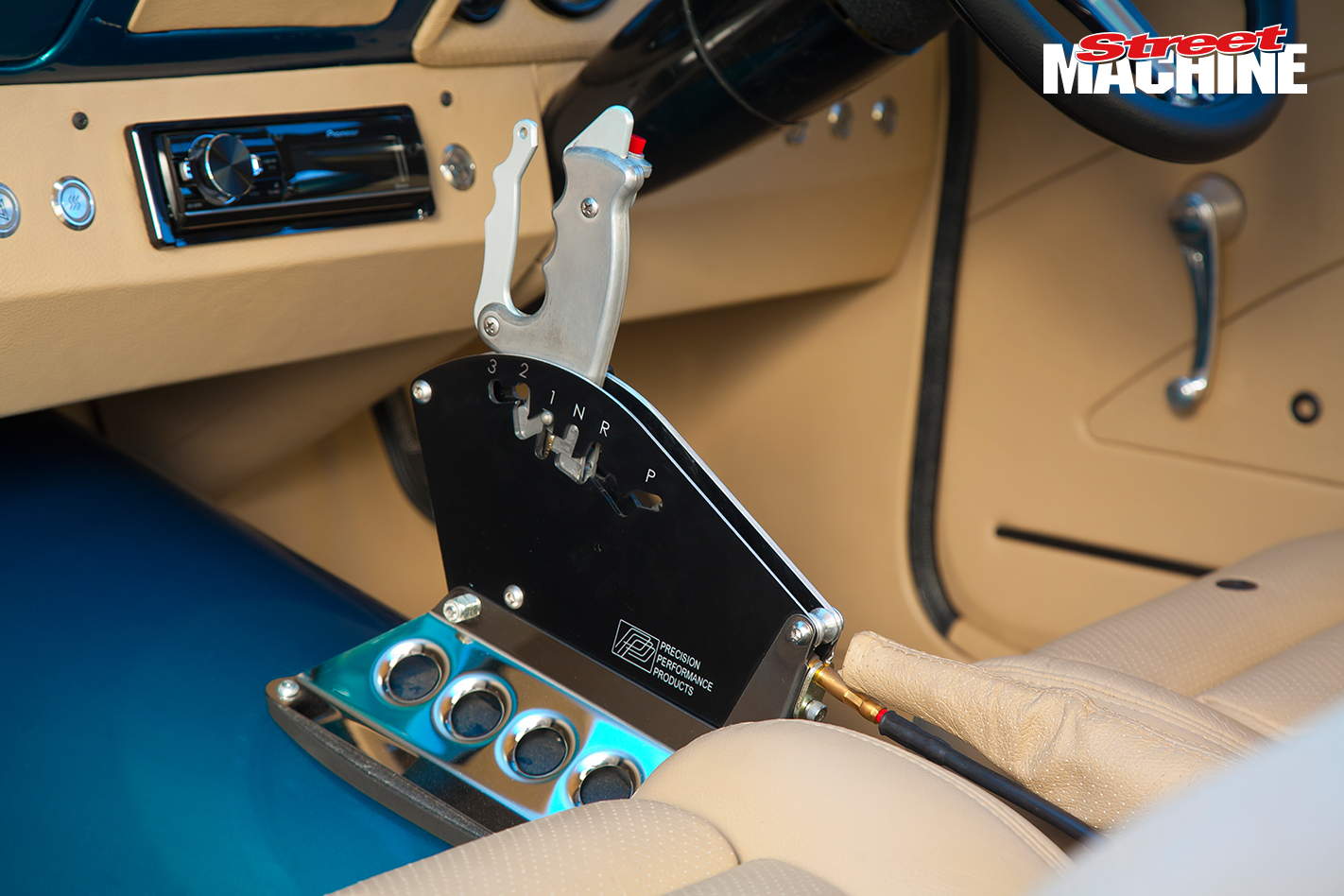 For the interior, Matt Gilkes from Inside Rides came up with four separate designs. Matt and Allan chopped and changed a few of the concepts to come up with the trophy-winning design. Show judges love it, with FAT LC scoring Top Interior (Street) at Summernats 27 and a silver Pinnacle Interior award at MotorEx. 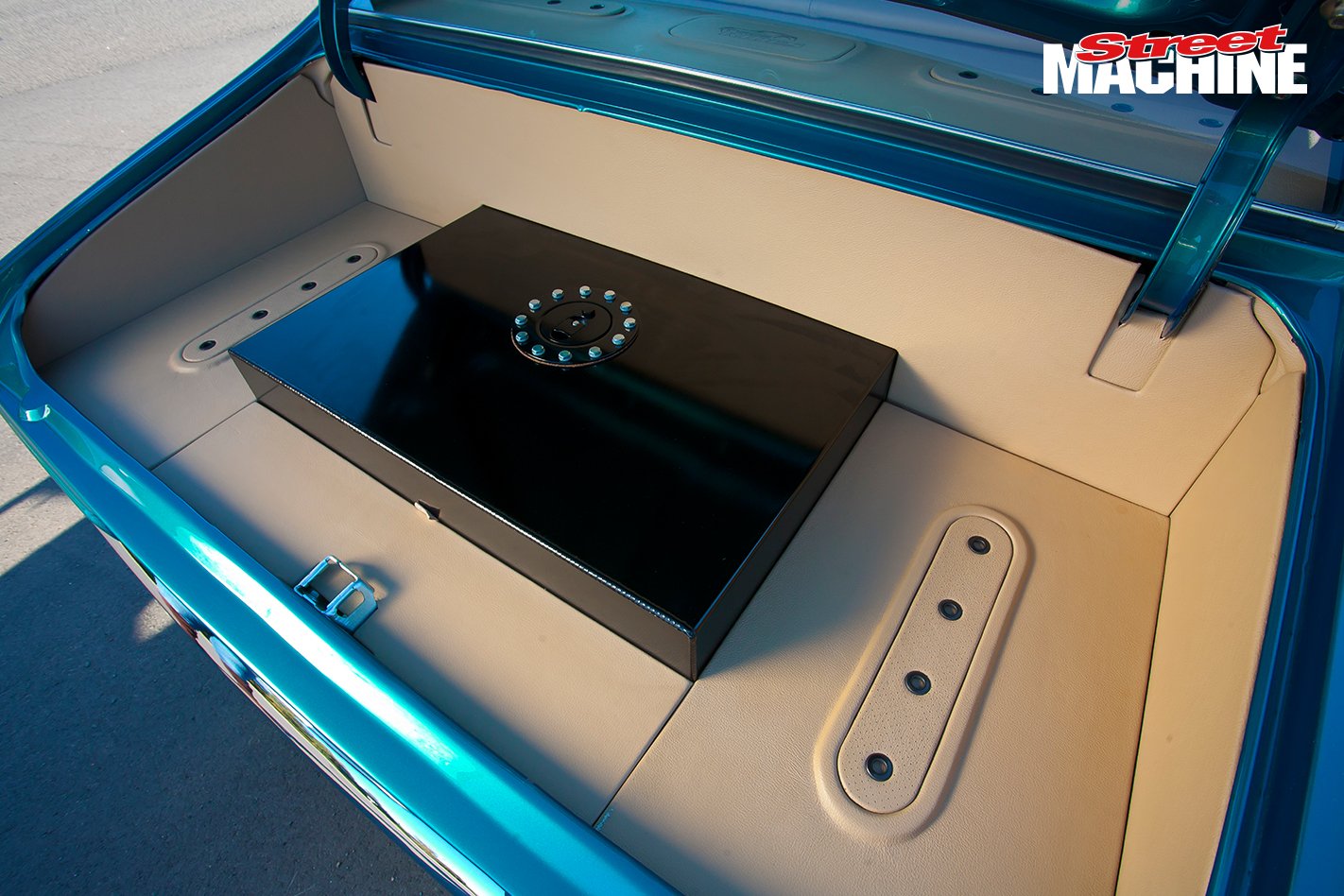 Along the way, Mark from Ontrak Auto Electrical wired up a completely revamped electrical system. Thanks to a tonne of help from good mate Rocky (who was there from when Allan picked the car up, through to it being rolled onto the trailer for MotorEx), the whole car came together in just 12 months. If you  think it was rushed, think again. FAT LC has picked up numerous awards at MotorEx and Summernats, including the big one: Top Judged Street, Summernats 27. 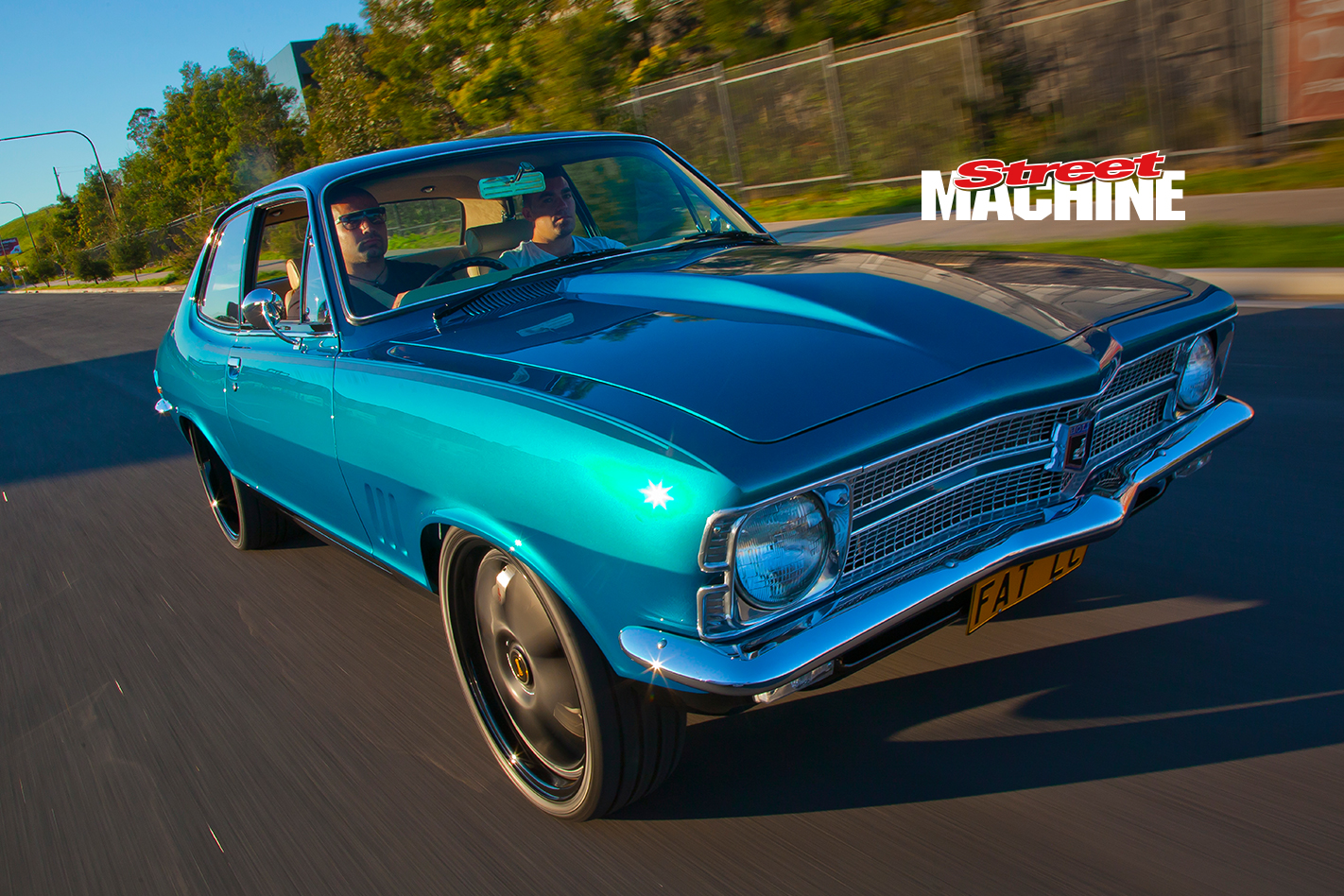 Allan can’t thank his wife Katelina enough for her support. In fact, she’s become a convert, fully supporting the next project – an XY Falcon! “I’m leaving the LC more as a driver,” Allan says. “The XY will be identical but more of an animal. It’ll definitely have a blower.” If it’s anywhere near as tasty as FAT LC, it will be well worth the wait! 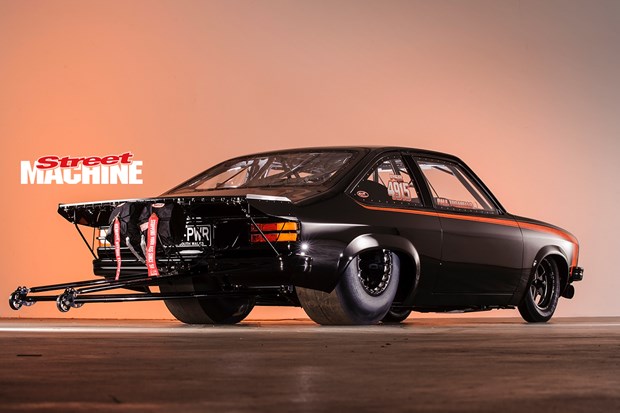 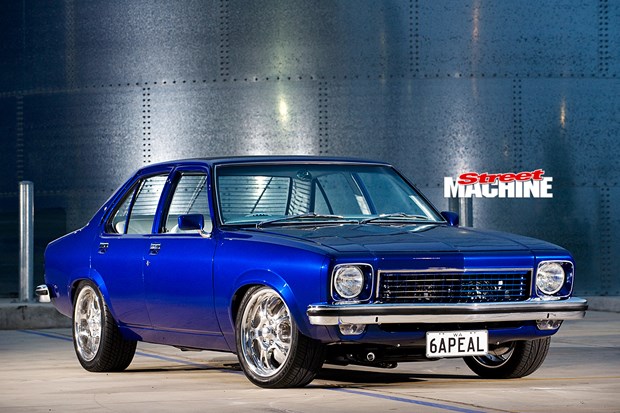 Alison and Gareth Lougher's award-winning 1975 Holden LH Torana 6APEAL proves you don't need a bent eight or heavy mods to compete against some of the finest show cars in the... 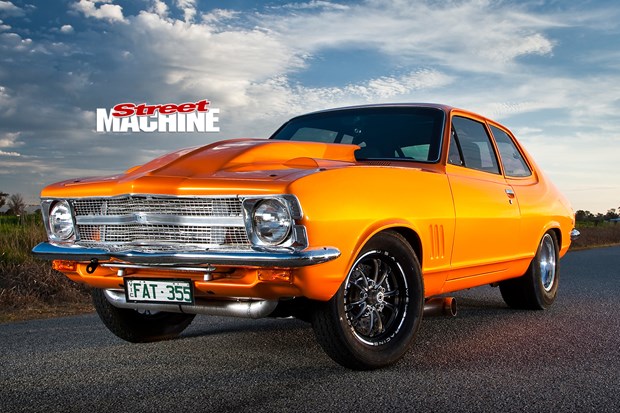