This article about Matt and his Holden Statesman was originally published in the June 2010 issue of Street Machine.

For a car to make a big impact at an event like Powercruise is a hell of an accomplishment. But watching Matt Vickers’s 8/71-blown HJ Statesman charge up the straight at Eastern Creek with the tyres ablaze during the Hour Of Power is hard to forget.

Even parked it’s seriously imposing — its sheer size has plenty to do with that. But once the wick is lit on the boosted 383ci small-block, you appreciate how purposeful the car is.

“I bought it from a guy in the Southern Highlands of NSW,” Matt says. “It was already engineered with a blown small-block but it’d been used and abused pretty badly.” He’d been pedalling a mild 308-powered Statesman for some time but was keen to go all out with the new car. Over the course of the next five years he transformed it from a rough and ready street brawler into this beautiful street and strip machine.

Considering that he built the car to race, you can’t help wondering why he went with a big luxo-barge.

“I wanted a car that was different from the norm, and the Statesman was a good-looking thing,” he reasons. It has twice the road presence of any Kingswood, so he’s definitely onto something with that line of thought.

However, it’s a matter of basic physics that if the Stato is carrying more weight, it will require more power to propel it down the quarter. With that in mind, Matt spent many late nights scouring the internet, researching the set-ups used by fast guys in the States. From there he drew up the specifications and sourced the parts he needed. Ned Sassine at Hercules Competition Engines pieced the combo together and spun it up on the engine dyno for a pleasing 698hp on pump juice, at just 6psi. With a 20psi pulley bolted up and a drink of C16, an impressive 820hp was wrung out. Not bad for a 383ci small-block, eh?

But the engine, while impressive, is just one part of a car that works undeniably well, both visually and on the drag strip. In an attempt to shave some weight, the front guards, bonnet and boot are fibreglass. And fitted with Dzus fasteners, they make the car a breeze to work on.

The rear guards were stretched and the inner arches tubbed out to the rails to accommodate those wicked 20x10 Billet Specialties rollers, which sport bulk dish and look just plain tasty. 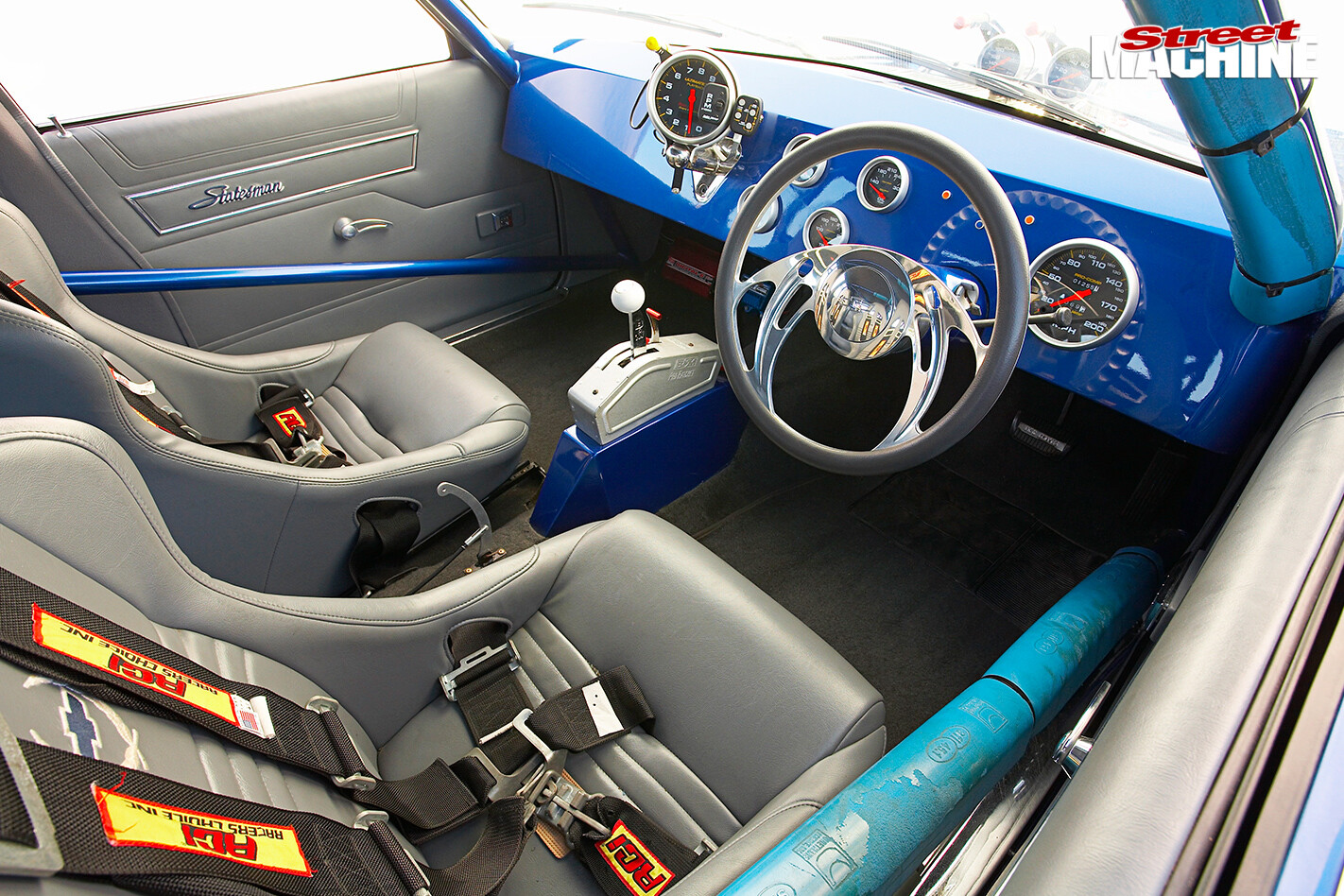 The rear runs the factory suspension set-up, with a 35-spline 4.56:1 nine-inch in a set of boxed trailing arms. Koni adjustable shocks provide tuneability but it’s basic for such a powerful car.

Despite that, with slicks and front runners bolted up, it’s happy to kick the front wheels off the deck on the way to a 9.70@137mph — that’s on the lazy pump gas tune and just 6psi!

“Tuning and fuel issues have stopped me from running it on big boost to see what it’s really capable of,” Matt explains.

The 10-point ’cage was painted Holden Impulse Blue to match the exterior and skirts a cabin that doesn’t let its minimalist, race-ready nature prevent it looking good. The custom sheet-metal dash does away with the redundant controls from the gadgets the Statesman used to haul around. Instead, it’s laden with Auto Meter Pro Comp gauges and warning lights. 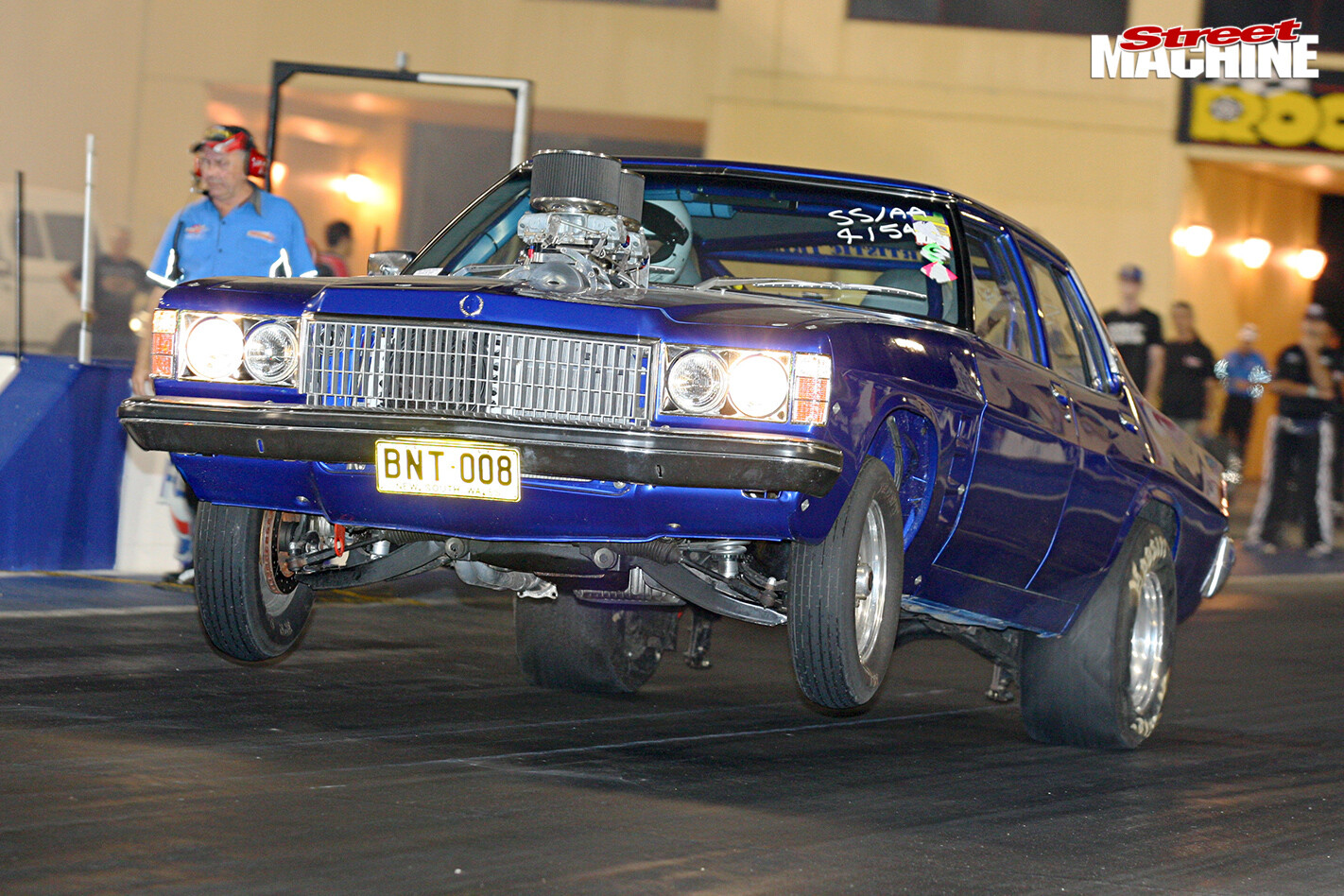 The Procar by Scat seats are comfy, light, and were re-trimmed in grey vinyl, along with the custom door trims and stock Stato rear seat. A Billet Specialties tiller, B&M Pro Ratchet shifter and RCI harnesses finish off a no-nonsense yet tidy cockpit.

The car has been finished for a couple of years now, and in that time Matt’s got in plenty of cruising and racing, but he has goals for the Stato and he knows that in order to achieve them he’ll have to take things to the next level.

“I’ve already sold the 8/71 and the carbies,” he says, “and a ProCharger and mechanical injection set-up are on their way over from the States.”

Teamed with some high-compression slugs and a methanol-only diet, he’s hoping to make 1200hp and run into the sevens.

As awesome as it is to see a blown nine-second car cruising the streets, with its motor proudly protruding well north of the bonnet, there’s something special about a big HJ Statesman clocking sevens on a small tyre.

“I’d like to be in the field in Mod Street because that’s what the car was built for.”  s