BLAKE Evans had a head start on the rest of us – he was the proud owner of this LC Torana when he was just 12 years old. “I bought it off eBay, with my own money,” he says. “Dad and I bid early and were the only bid.”

An excited Blake and his slightly shocked dad Paul headed east from the Barossa to Melbourne with an empty car trailer and a meagre $5000. “It wasn’t as good in the flesh, but it had all the hard-to-find parts and was running,” he says of the 186-powered S-model in Lone O’Ranger orange. Young Blake figured he’d turn it into a concours GTR XU-1 replica. “I nagged Dad for ages to help me work on it, but his rules were: ‘I’ll guide you but I’m not bloody doing it for you – you have to learn somehow!’ And it worked – though I made plenty of mistakes,” he laughs. The guidance was top-notch too, as Paul is a respected paint and panel man.

Under Paul’s supervision the Torry was slowly stripped. Teenage Blake managed to get it into etch primer before losing interest; he got distracted by other cars, mostly of the VL kind. This ended up being a blessing in disguise. 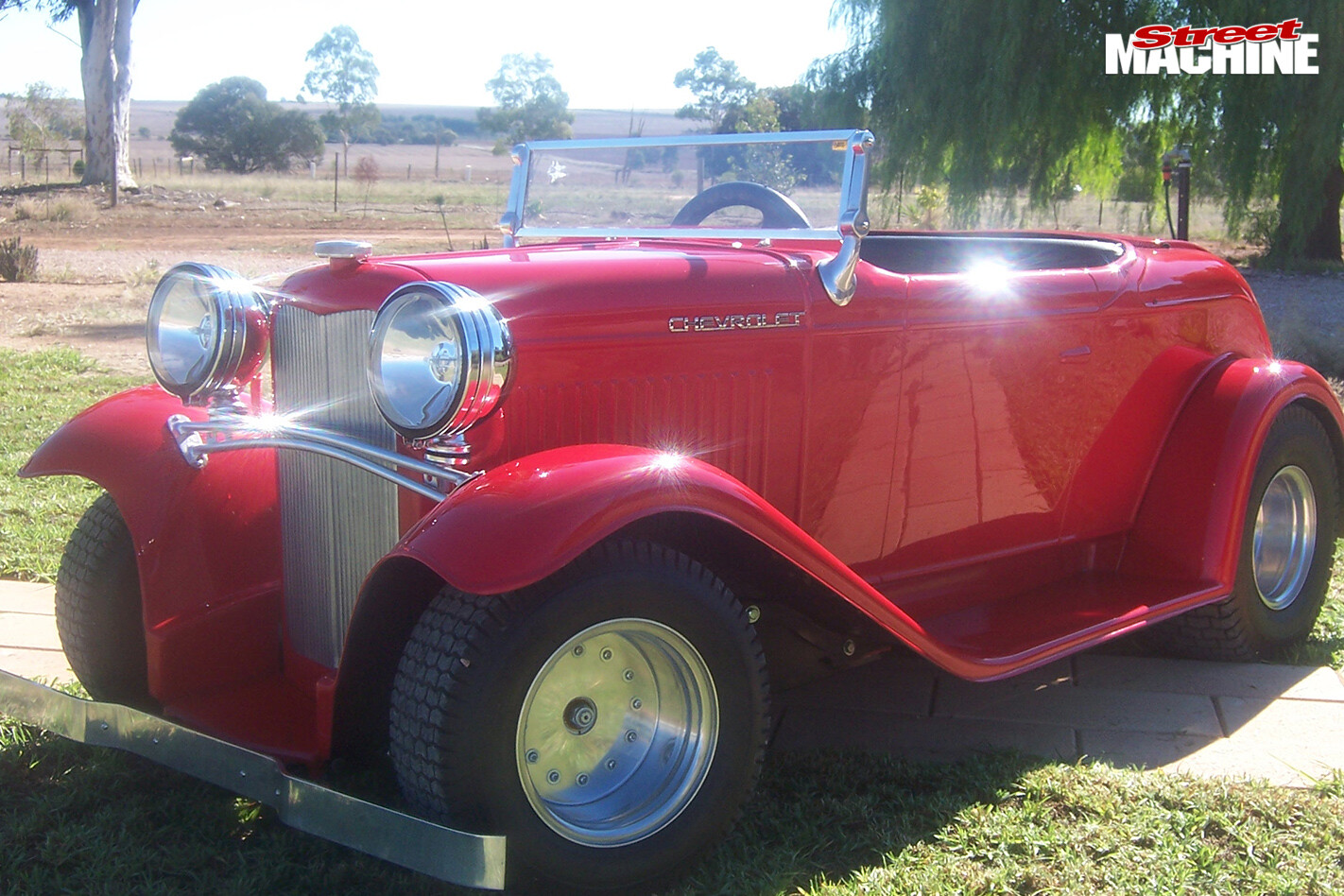 “I bought a clean VL Calais as a daily, which I planned to tub and stick in a hot 383ci stroker,” he says. “But a week before it was to be pulled off the road, it was badly T-boned while parked in a car park.”

With the 383-cuber and a TH350 now sitting idle on the shed floor – near the LC shell – a new plan was soon hatched. “I decided to build the Torana as a fully engineered, tough GTR replica.”

First up, Blake set about the foundation bodywork. “I had worked on it a little between playing with Commodores, but once I decided on the V8 conversion, I spent the next 12 months just on the body,” he says. 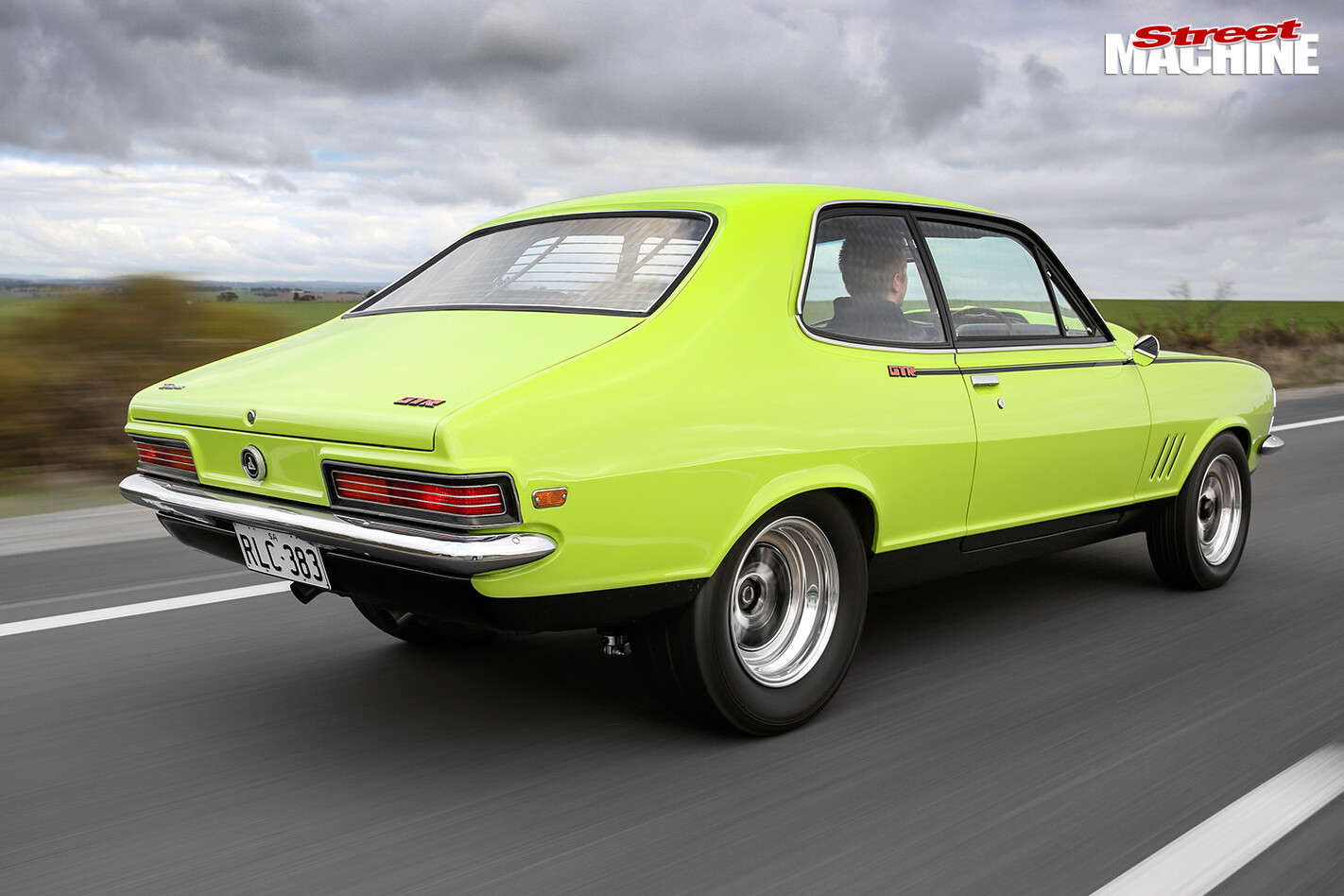 He soon discovered that tinworm had had its way with almost every panel, but had spared the floor. So a NOS nosecone was sourced, while the remaining panels were aftermarket jobs. “Nothing fit, so there was a lot of tweaking to get the alignment and gaps right,” Blake says. “Before this, I’d only done a bit of panelwork here and there. This was from start to finish – I’d never done anything like it.” Grasshopper Blake soon had the Torry straight and tight, then drowned the shell in PPG Lina Mint green.

The project was now humming along nicely, albeit without any deadlines – until Blake had the superb idea of getting the car ready to race at the first Holden-Powered Nationals. 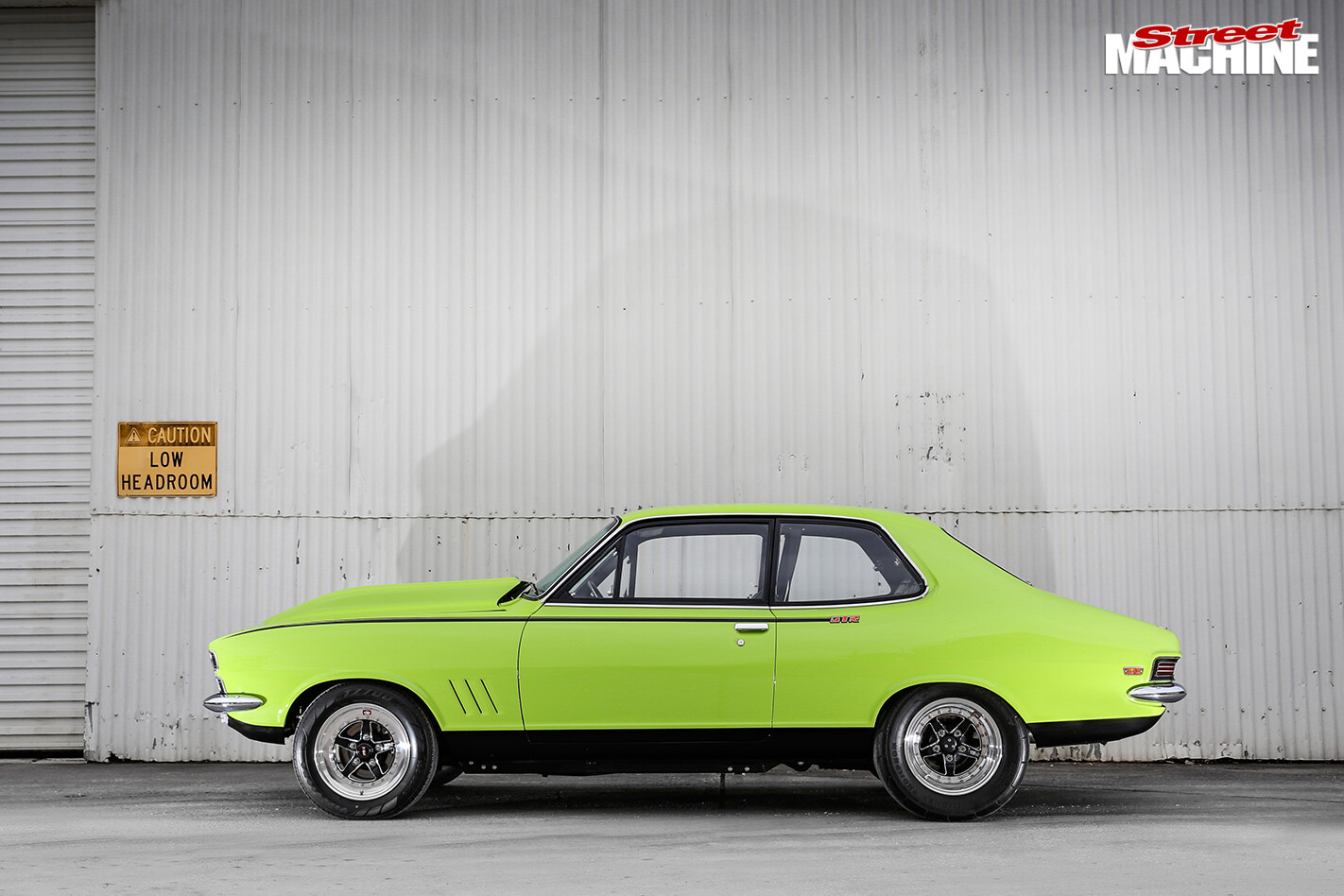 “That was February, and the car was only a painted bare shell, so we had four months to get it to the Nationals in May,” he says.

Thankfully he’d done much of the tricky prep work earlier on. “I had the engine and trans in and out about 30 times to get everything mocked up and fitting correctly.”

In slid the stonker Holden V8, fed by a Holley 750 Ultra HP atop a Harrop single-plane mani. Below are VN heads and a Wade solid cam. Probe forged flat-top pistons bring compression to 11.6:1, while still running PULP. They swing off COME H-beam 5.7-inch rods mated to a COME stroker crank. A High Energy Torry sump seals the bottom end. Spark is created with an MSD Pro-Billet dizzy and 6AL ignition, with the juice pumped via a Holley HP 125. CRS 15/8-inch extractors send the gasses into twin 2.5-inch stainless exhaust pipes, while a PWR three-core radiator coupled with twin 10-inch Spal fans keep the temp in check.

Behind is a TH350 with full-manual valvebody and a TCE 5000 stall, mated to a three-inch tailshaft. A nine-inch packing 3.5 gears, Truetrac four-pinion nodular centre and 31-spline axles gets power to the ground. Underneath also copped a heap of upgrades, including Koni adjustable shocks mated to the LC springs up front, and adjustable chrome-moly control arms, QA1 springs and double-adjustable QA1 coil-overs at the rear. Stopping it all are WB calipers mounted to P76 discs at the pointy end, with trusty VL discs and calipers hanging off the diff. All four corners have been altered to HQ half-inch studs, to which Blake has bolted Weld RT-S rims – 15x5 and 15x8 – wrapped in Michelin 185/65 and M/T ET Street 275/50 hoops respectively.

Inside is all business, in keeping with the GTR theme. Aaron O’Hara re-trimmed the pews in Roebuck vinyl with Winner Products door trims to match. As you’d expect, Blake needed a few extra gauges for his quarter-mile antics, so he’s added a range of Auto Meter goodies into the factory slots. 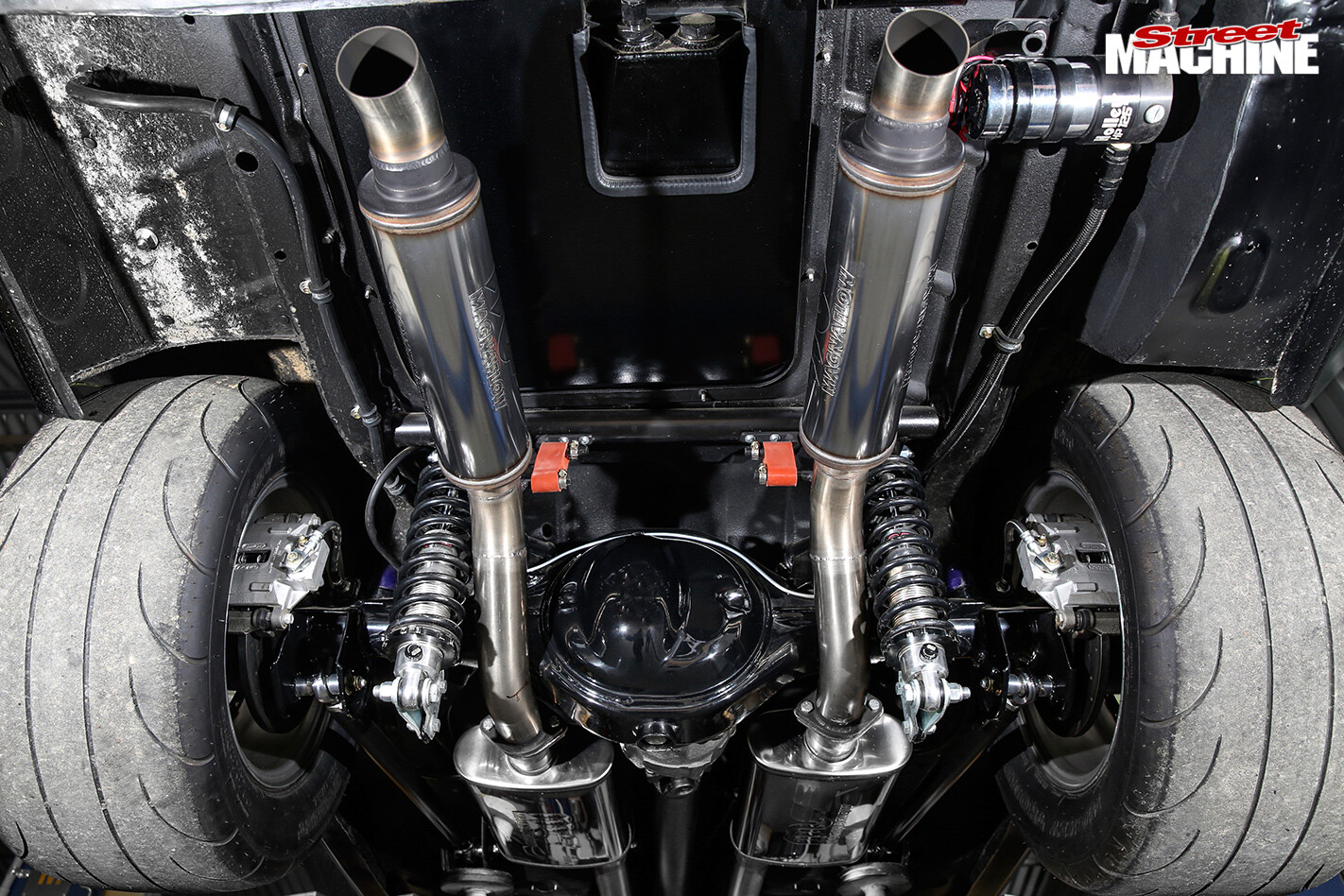 All in all, it’s a beautiful car – but did it make the deadline? “It was finished five days before the Nationals so I could put some kays on it and fix any bugs. Sure enough, it had some!” Blake laughs. So a few more late nights ensued, but they were soon towing the LC across the border. “I’d never driven it at full throttle so Dad suggested I take it easy. Yeah, sure!” Blake laughs. The little Torry’s first pass saw a heap of wheelspin, yet it cracked an 11.00. “We were all grinning from ear to ear,” Blake enthuses. Over the weekend he ran a PB of 10.51@131mph, in full street trim and full exhaust. “It lifted the front easy and ran dead straight thanks to Dad’s string-line wheel alignment,” he says. “I have to thank Dad for his guidance and support,” Blake continues. “I couldn’t have done it without him. It wasn’t always smiles, with a heap of cut knuckles, a few arguments, and there were a lot of times I wanted to give up. But my persistence prevailed and the car turned out how I pictured it.

“I plan to get it fully engineered in the next few months and also race it again soon with a better diff ratio, different fuel and drop the pipes. She’s got a lot more in her. I’m proud to own a mid-10-second street car at the age of 22. Though I still want to go quicker and faster!”

UPDATE: Since we originally featured the car, Blake has rebuilt the engine with new pistons, rods, and camshaft to help the 383 Holden motor rev harder. With the old setup it went 10.4 down the quarter and on its first outing with the new setup went 10.0 in full street trim with a head wind!

THANKS
Mum and Dad for their support and letting me pursue my passion; good mate Todd Foley; Jay Jeffrey for tune tips; Andy Chew and Simon Hollingworth for motor assistance; Anthony Ghinis; Chris from CK Racing; everyone who helped