After someone used his Ford XB GS Falon for soccer practice, Alyn Blackshaw rebuilt it better than ever

A KICK in the rear gave Alyn Blackshaw a kick in the rear. You see, some damn fool at Powercruise in 2011 had laid a boot into the hindquarters of Alyn’s self-built XB GS Falcon, and before he knew it he was neck-deep in a full-blown rebuild.

“I’d originally bought an XA coupe that I stripped down and had blasted,” WA-based Alyn explains. “All that was left was a block of Swiss cheese. There were fist-sized lumps of bog falling out of it and as far as I was concerned it was unsalvageable.” 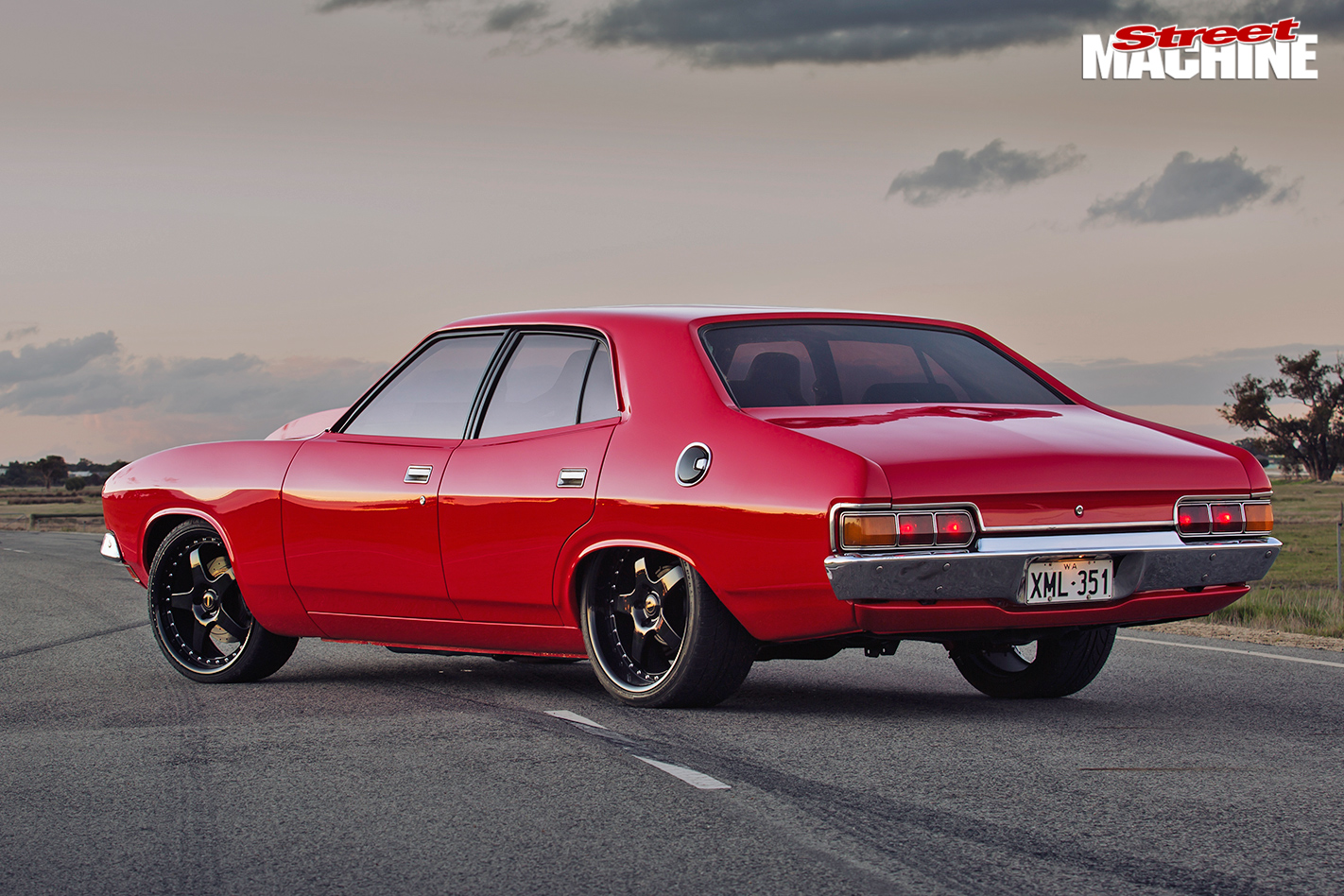 There was one saving grace, though – the XA coupe had come chock-full of XB GT running gear. At first Alyn was sceptical, but he stripped it down and the numbers matched. “It turns out the previous owner had crashed a genuine XB GT, then bought the coupe to swap the running gear into before selling the lot on to me,” he says.

He gave the rotten coupe shell the flick and started searching for another project. A mate found an XB GS on eBay painted Track Red with a black vinyl roof, and Alyn decided it was the perfect candidate to receive the GT running gear. 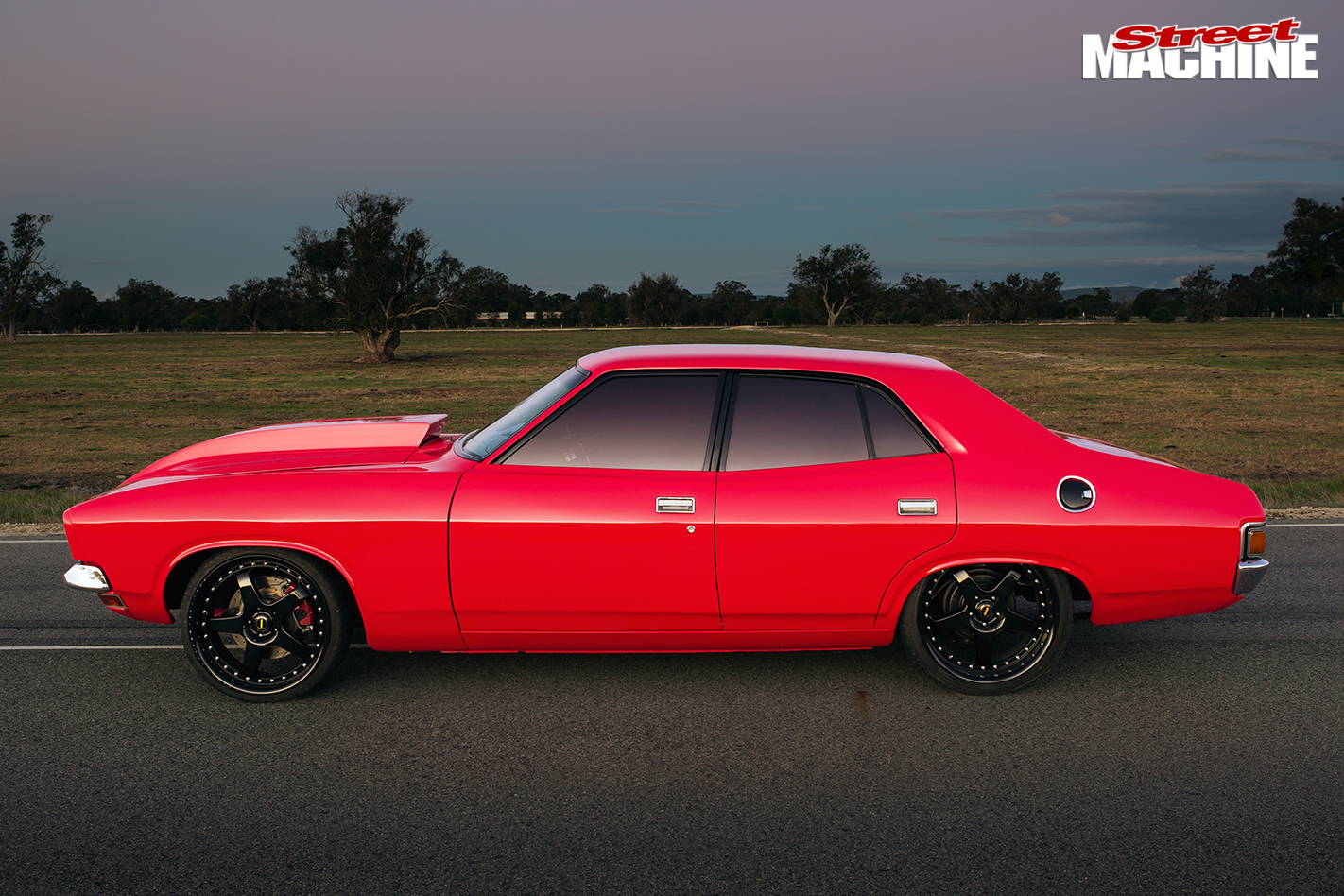 Inspired by a Ferrari 458, the colour actually is called Ferrari Red

“It was in pretty good nick,” he recalls. “I swapped the running gear out for the 351, Top Loader and nine-inch from the coupe. I added a large solid cam, a Weiand manifold and a 750 double-pumper, which gave it a lot of attitude.”

Alyn drove it around in this guise for two years before he began to think about getting it re-sprayed. Then came the Powercruise incident.

“Some mongrel at Powercruise kicked the rear guard in,” he says. “I’m not sure what that was about – I didn’t see it happen but I assume it was just some drunken dickhead. It really motivated me to tidy the car up, though, because as well as the guard it needed a few small rust repairs.” 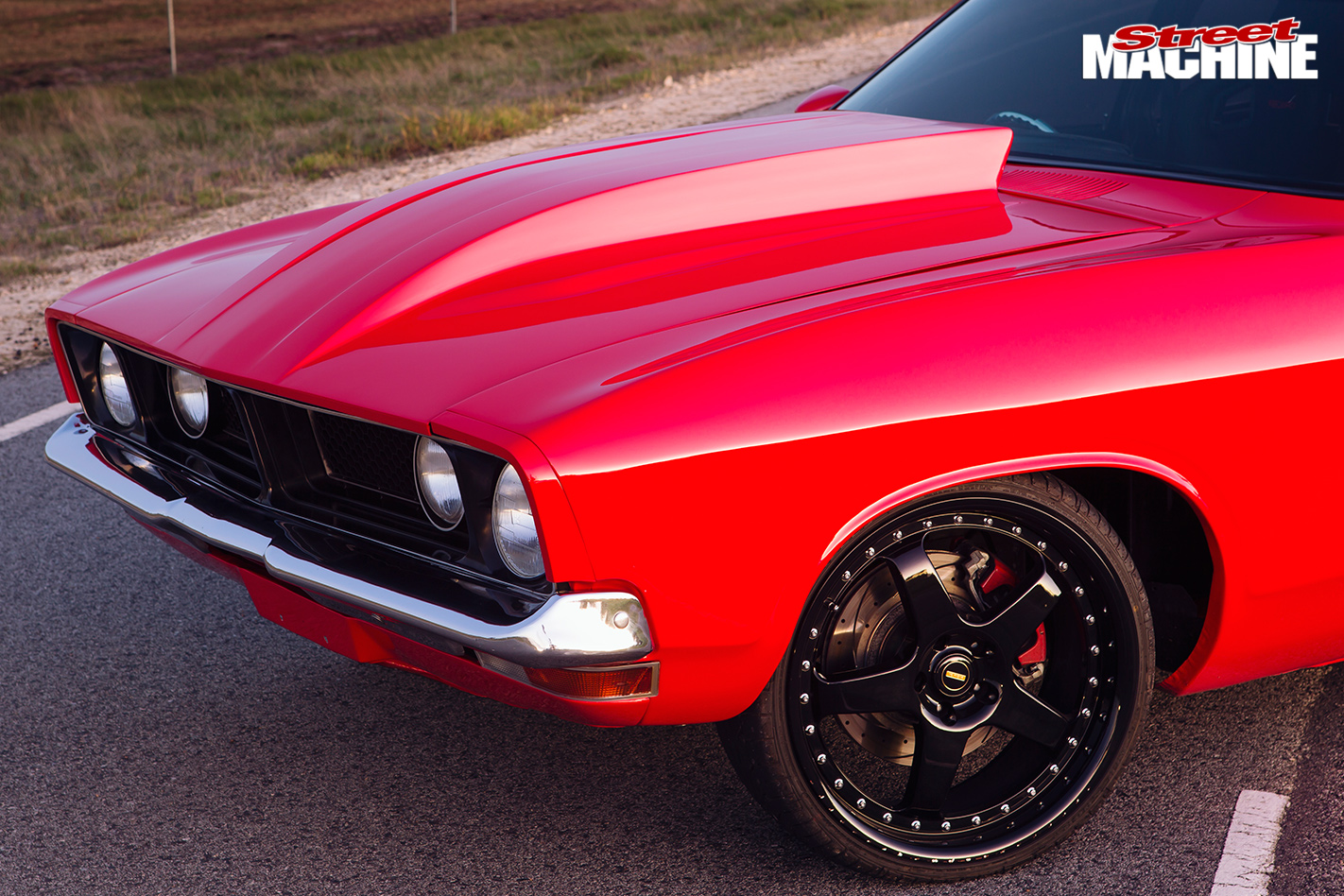 Alyn has always been a fan of the Simmons FR series of wheels, and rebuilding the XB was the perfect excuse to buy himself a set

Alyn stripped the XB back to a shell and hauled it up to Street Rides, leaving Tony Ward to take care of the panelwork.

“I decided to leave the vinyl roof off while it was at the paint shop,” Alyn explains. “It was a big call at the time but I don’t think it would have worked with the image that I had in mind for the car.”

While the bodywork was underway, Clint Di Giovanni from SRM was employed to create the all-steel reverse-cowl bonnet. Alyn wanted to keep the original lines, so Clint cut and lifted the bonnet skin four inches before filling in the sides and blanking off the space at the rear. 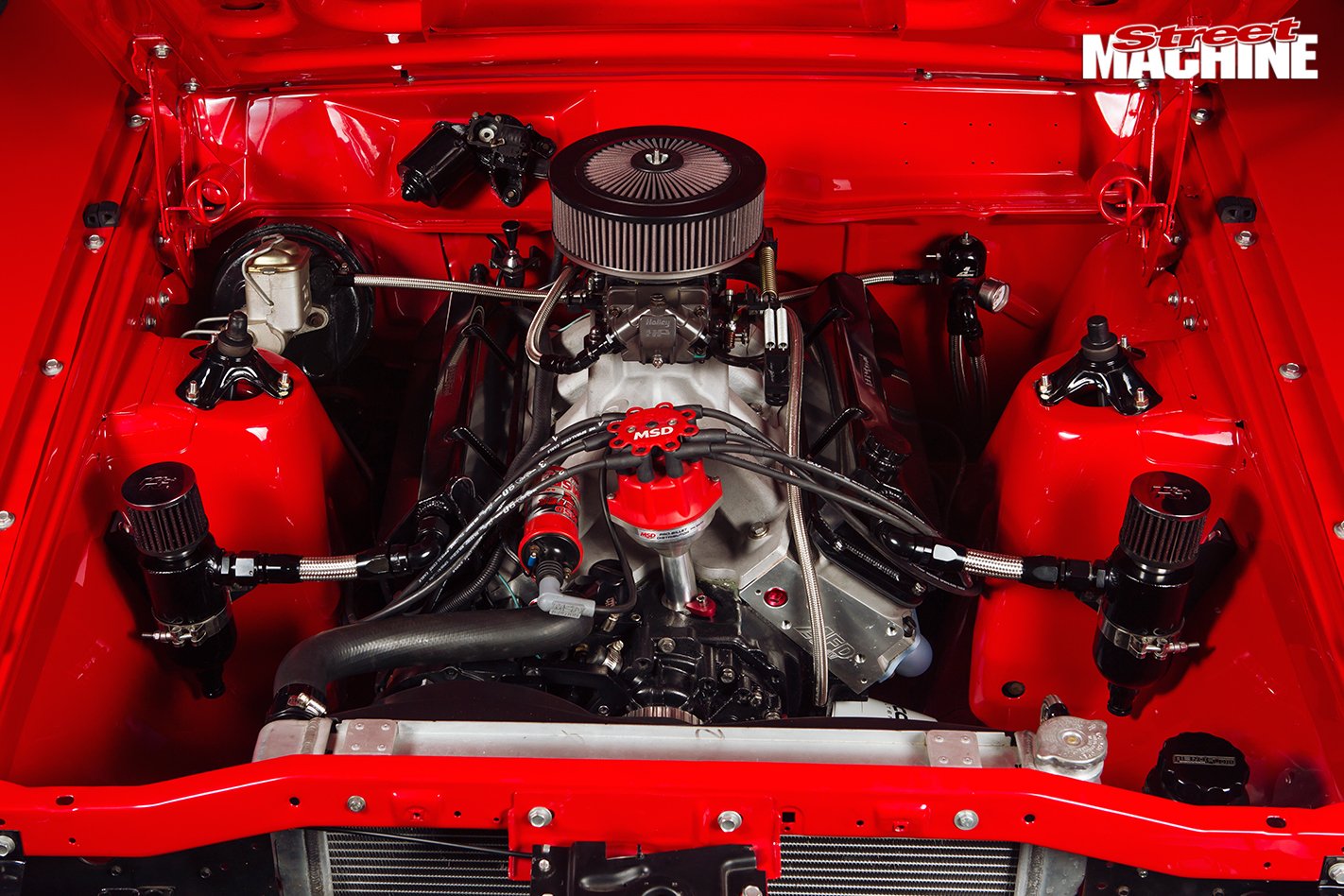 By this stage Alyn still hadn’t figured out what colour his XB was going to be. Although he was fond of the Track Red, he wanted something that looked just that little bit sharper.

“I had visited a few car yards in the hope of finding something I liked but it wasn’t until I was heading home after visiting the XB one arvo when a Ferrari 458 pulled out in front of me. As soon as I saw it I knew that was the colour it had to be – Ferrari Red!” 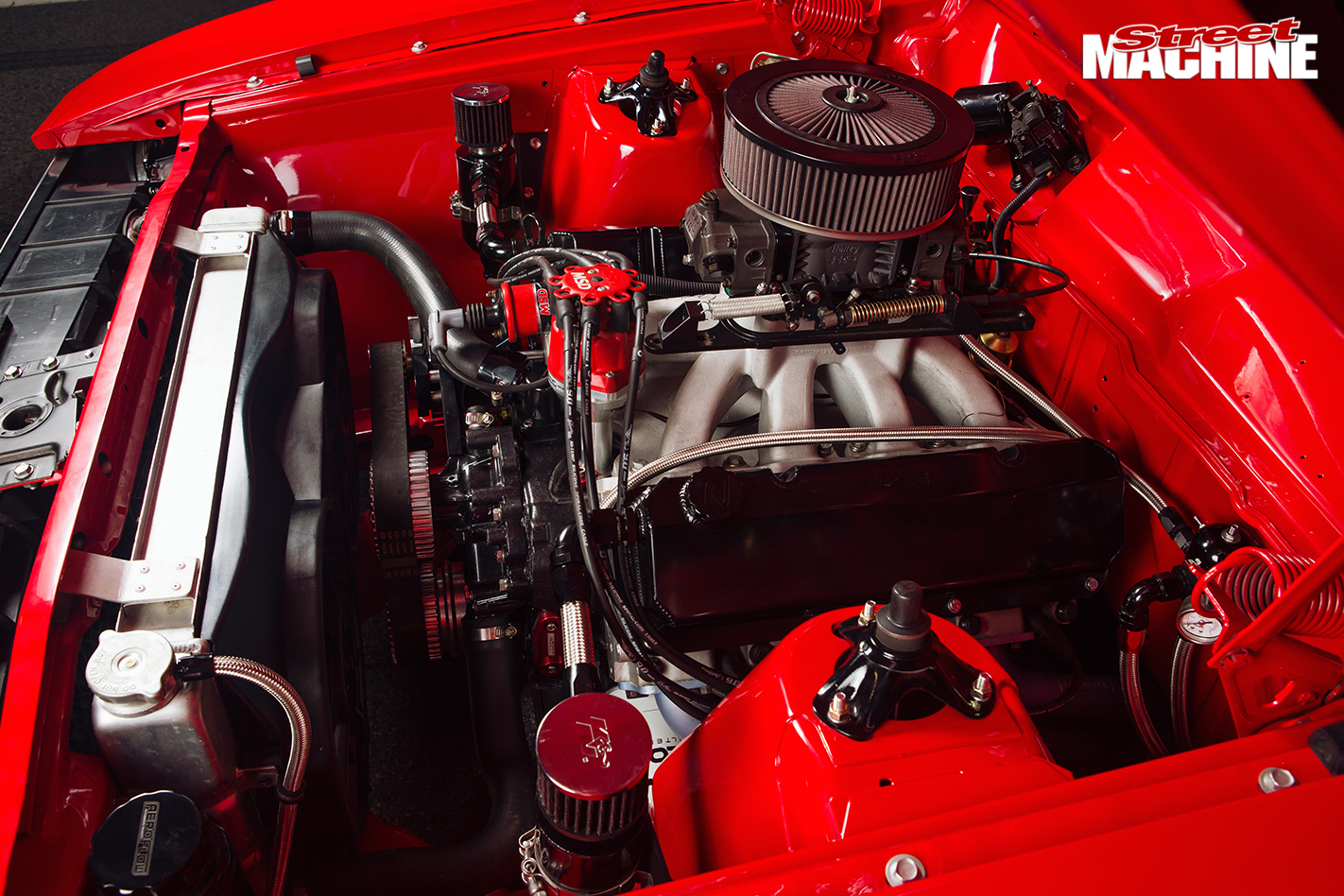 With the panel, paint and colour sorted, Alyn had the Falcon back home and ready for fit-up.

“I cleaned up the underside and hit it with some POR-15, then tackled the glass, rubbers and all that fiddly stuff. I wasn’t really sure what to do with the interior but I found some ‘racy’ looking Recaro seats on eBay. They were already trimmed in black with red stitching, so I snapped them up.”

Alyn got on to Justin Treasure, who came out and trimmed the roof lining, and together they decided on a plan for the rest of the interior using the Recaros as a guide. A rear seat taken from a BF XR8 was cut and re-bolstered to fit, then trimmed along with the door cards to match the overall theme. 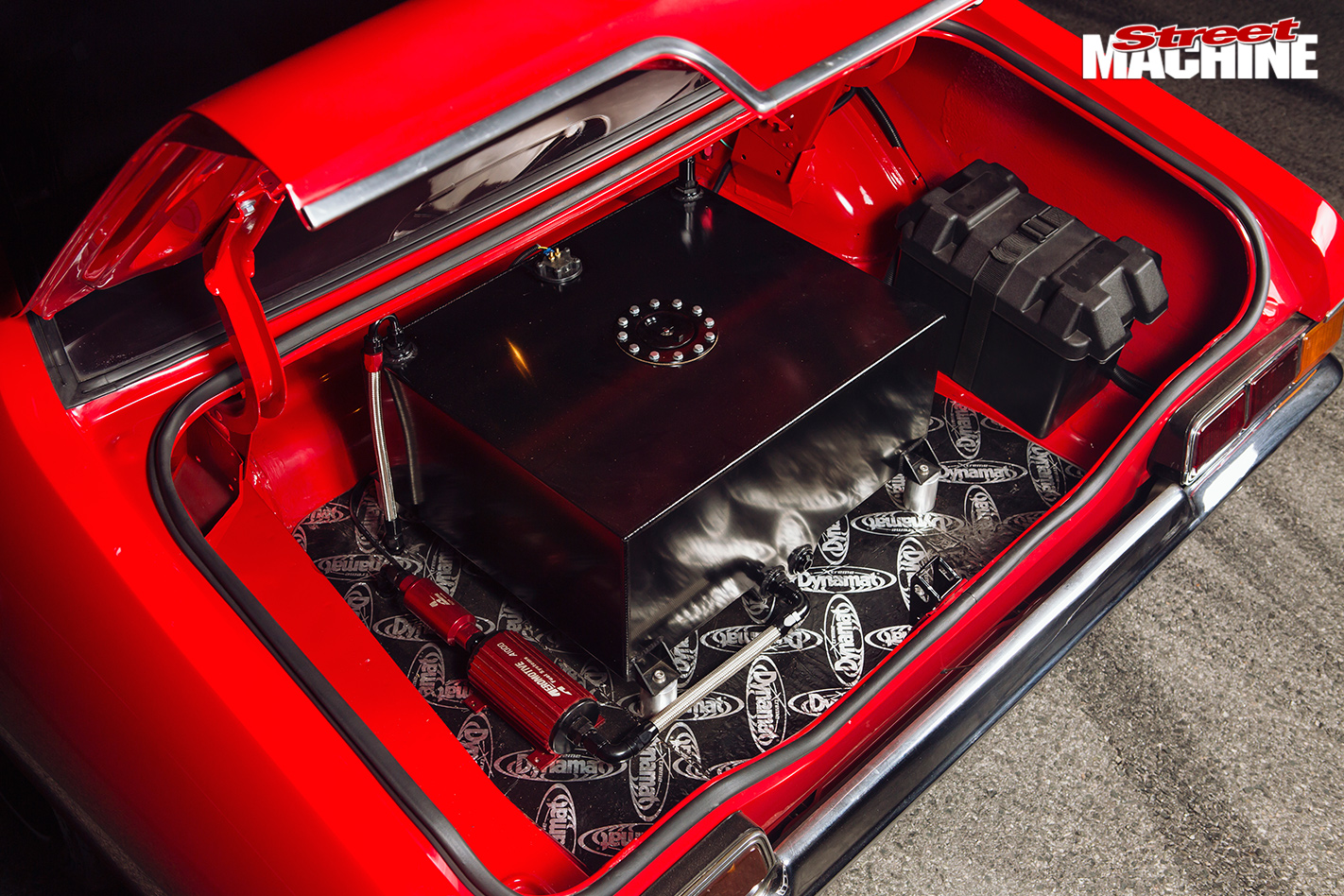 The boot is all business, housing the fuel cell, Aeromotive A1000 fuel pump and relocated battery

While the interior stuff was being taken care of, Alyn bought a set of black Simmons FR20s, measuring up at 7.5in-wide at the pointy end and 10 inches at the fat end. The Falcon was slammed over the big hoops courtesy of Lovells Ultra Low springs up front and re-set leaves out back, with Koni adjustable shocks all ’round.

Now, large-diameter wheels need large-diameter brakes, so a set of PBR 330mm drilled and slotted rotors with PBR twin-piston calipers were fitted to the front. Not being confident with setting up something as important as the brake system, the car was sent back to Clint at SRM for completion of the brake lines. Clint also took care of the installation of the fuel cell, trans cooler and radiator mounts. 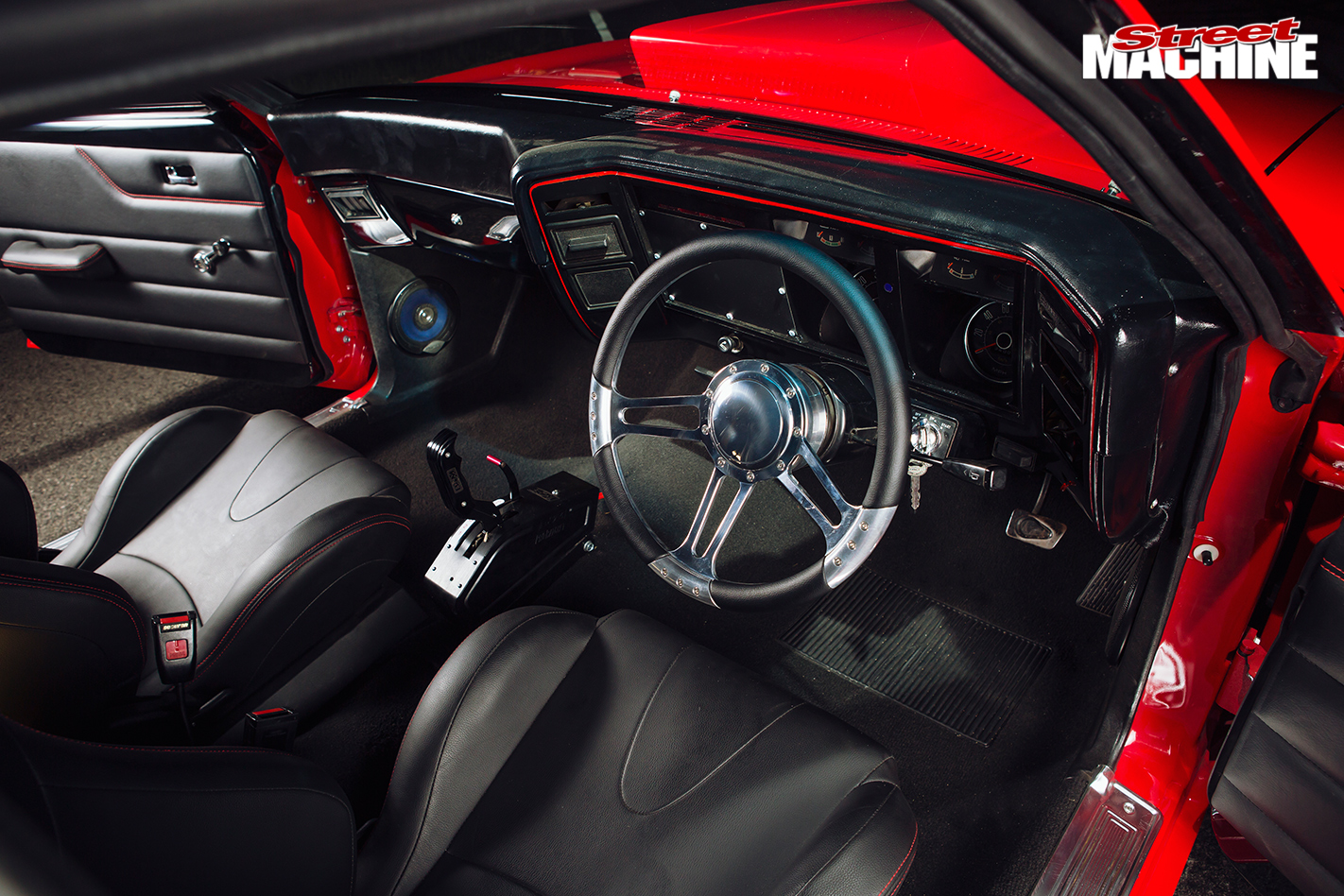 Electronics wizard Jamie Staltari from Shiftkits Australia was then summoned to re-wire the entire car. The old wiring was turfed and the new wiring harness was carefully hidden away with only the absolutely necessary stuff left visible.

With a fresh 2V 351ci Clevo sorted for the Falcon, all that was left to do was fire it up. But it was soon apparent that something wasn’t right. “I got the car running but it didn’t exactly go to plan,” Alyn recalls. “It turns out that the intake manifold had come loose. The engine leaned out and, just like that, two of the pistons were toast! It was pretty disheartening, and I ended up selling off what was left of the engine to cover some of the cost for a new build.” 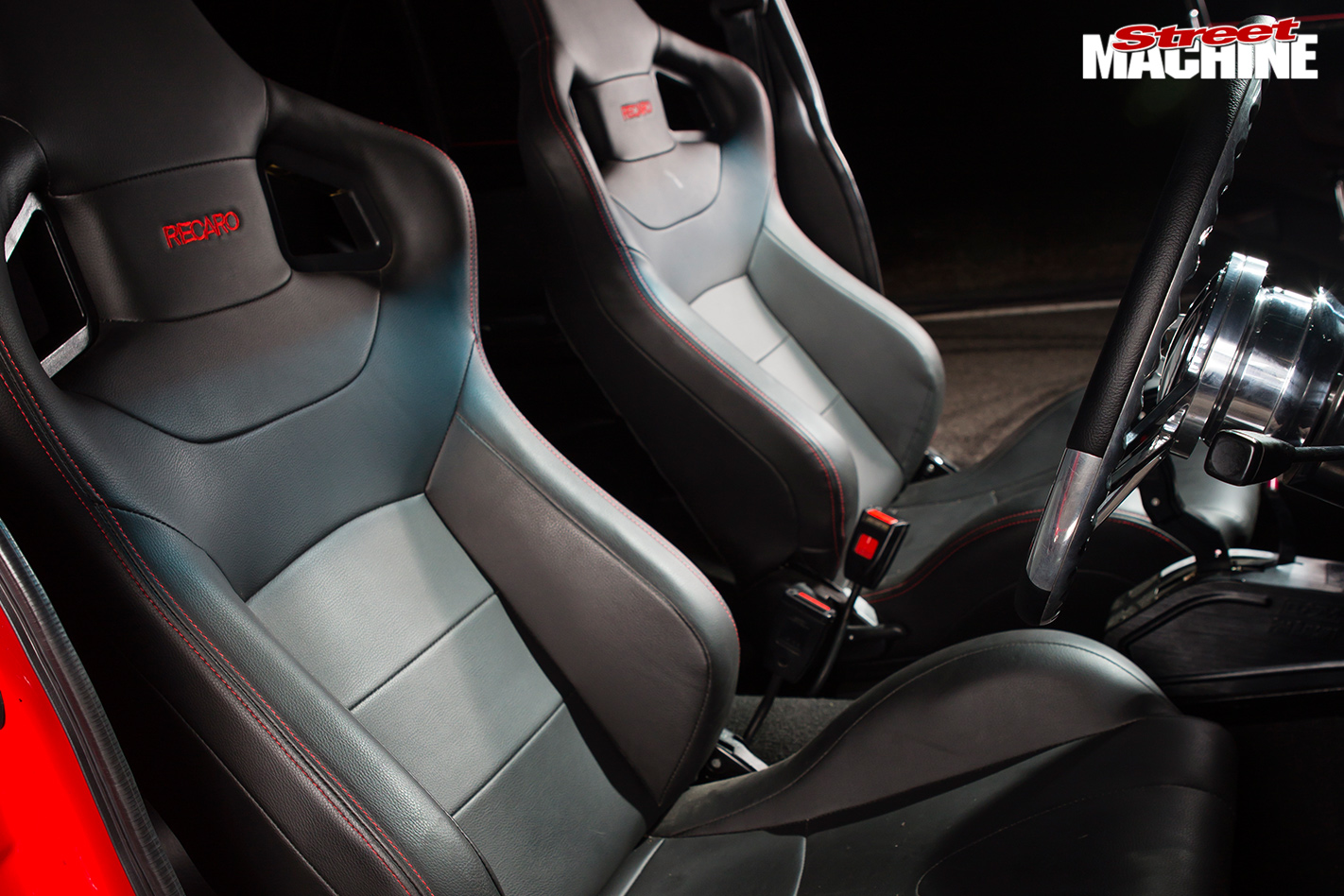 The Recaro front seats laid the foundations for the rest of the interior, with a BF XR8 rear seat and the door panels being trimmed to match

With a renewed determination, he salvaged another Cleveland block from a ZF Fairlane that he had sitting around. Dion Staltari was then called upon to turn the Clevo into a stout 393ci combo.

The Clevo block was filled with a Scat crank and rods, which swing some more durable SRP forged pistons. The valvetrain consists of a Lunati solid-roller cam and lifters, COMP valve springs and Ferrea 4V valves. A pair of AFD 4V shallow-chamber heads are matched with a TFC 4V high-rise intake manifold and a 750 Ultra HP Holley. An Aeromotive A1000 fuel pump keeps the 98-octane fuel flowing, while the MSD 6AL unit with matching Blaster 3 coil lights the fires. A set of Pacemaker four-into-one headers with two-inch primaries expels the hot stuff through some homemade three-inch pipes. 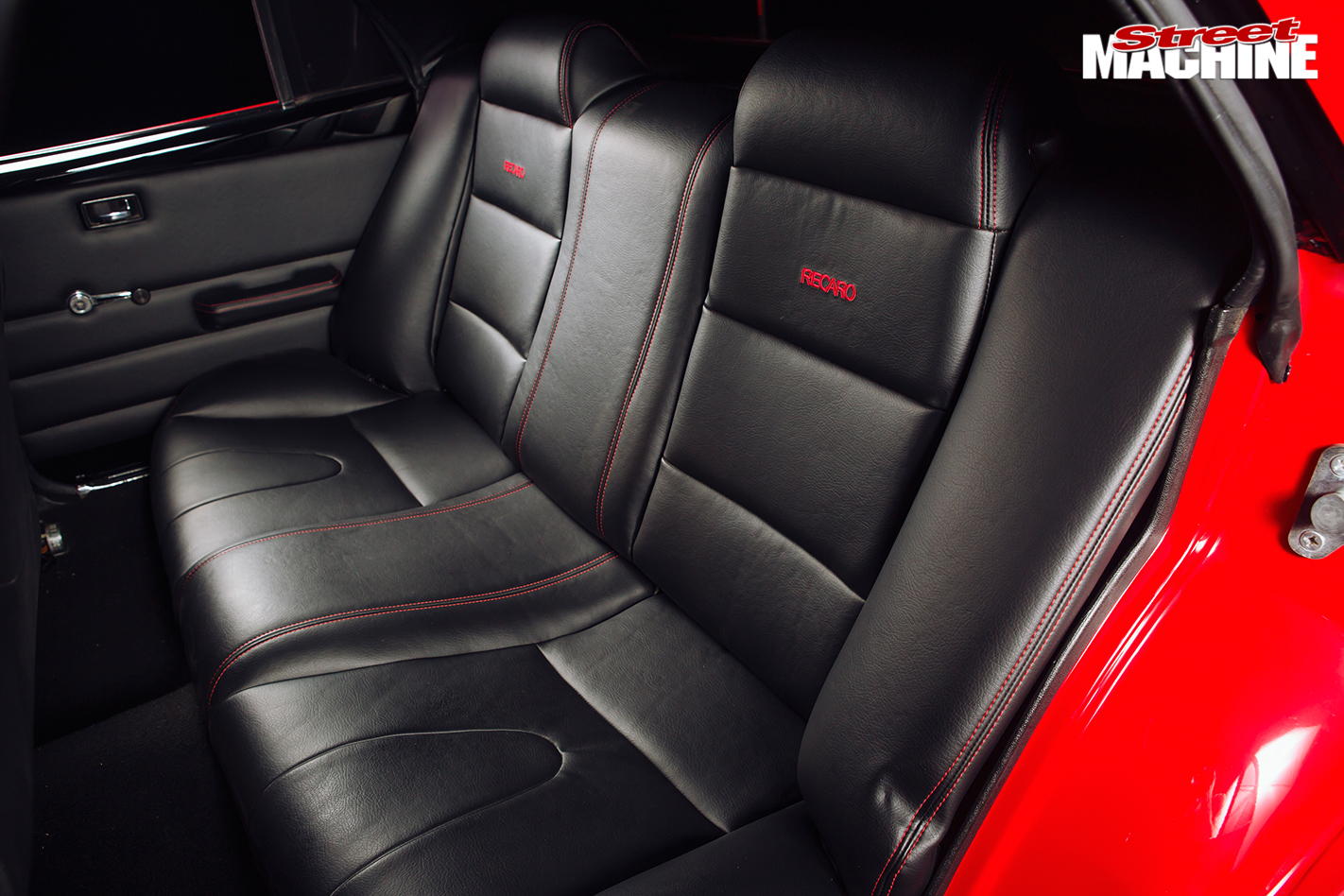 With a dyno-proven 580hp and 530lb-ft, the remaining driveline needed to be staunch. Chris Dimoff from Dimoff Transmission & Motors built a manualised C10 to take the punishment, which is matched to a 3000rpm stall converter. The full-manual forward-pattern ’box swaps gears through a B&M Stealth Pro Ratchet shifter. A Final Drive-built tailshaft sends power down the line to a nine-inch with a Strange centre, Truetrac locker and 3.55 gears.

“A set of digital gauges will be on the shopping list somewhere down the track, too – it never ends!” Alyn laughs. 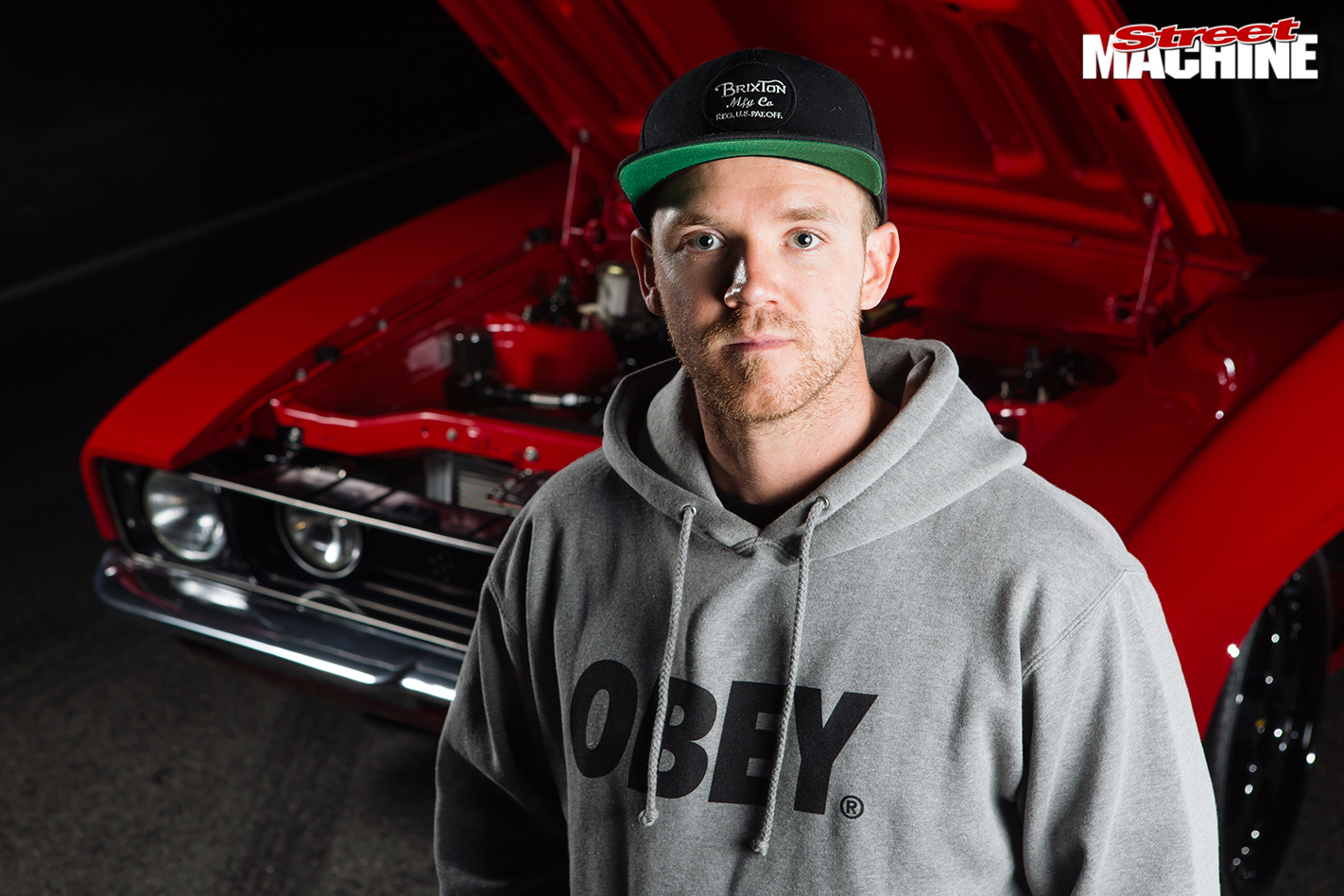 Now that the initial engine dramas are sorted, Alyn is keen to clock up plenty of street miles and even see some strip action when he gets the chance.

“It’s so exciting to have it finished, and it’s so good to just get out and cruise. That’s what I really love doing, and that’s exactly why I built it.”