BUILDING a street machine from scratch is a massive undertaking. You’ve got to commit several years of your life to the project, and in doing so accept that they’re likely to be fraught with frustration, sacrifice and untold financial hardship. It’s little wonder, then, that West Australian Domenic Licastro went in search of a project that was already fundamentally complete, so that he could tweak and refine it to suit his own personal tastes.

This gorgeous XW Falcon, resplendent in its custom orange duco, was originally put together in Sydney in 2007 before being sold off to a Perth-based owner, who enjoyed it for a couple of years before again advertising it for sale. That’s when Dom came into the picture.

“It was a really nice car when I bought it, but there were a few things I wanted to change,” Dom says. It might have started out as “a few things”, but over the following three years Dom’s influence on the car developed as he continued to make improvements. “I didn’t want to build a car from scratch; I just wanted to add my own touches,” he says. “Ultimately though, the only things I haven’t changed are the paint and interior trim.” The first port of call was the rolling stock, because Dom wasn’t a big fan of the 20in wire wheels the car was rolling on. “I started out by buying some five-spoke Intro billets, then I figured that you’d be able to see the undercarriage through the more open design of the wheels,” he says. “So I decided to pull the car down, strip the undercarriage back and redo it in KBS gloss black, which took me about a year.”

The Falcon was reassembled just in time for the 2011 All Ford Day where it picked up the all-important People’s Choice gong, but it wasn’t long before it was in pieces again. Dom had decided that it was time for a tougher engine, and took the opportunity to treat the engine bay to a respray and a thorough tidy up while he was at it. 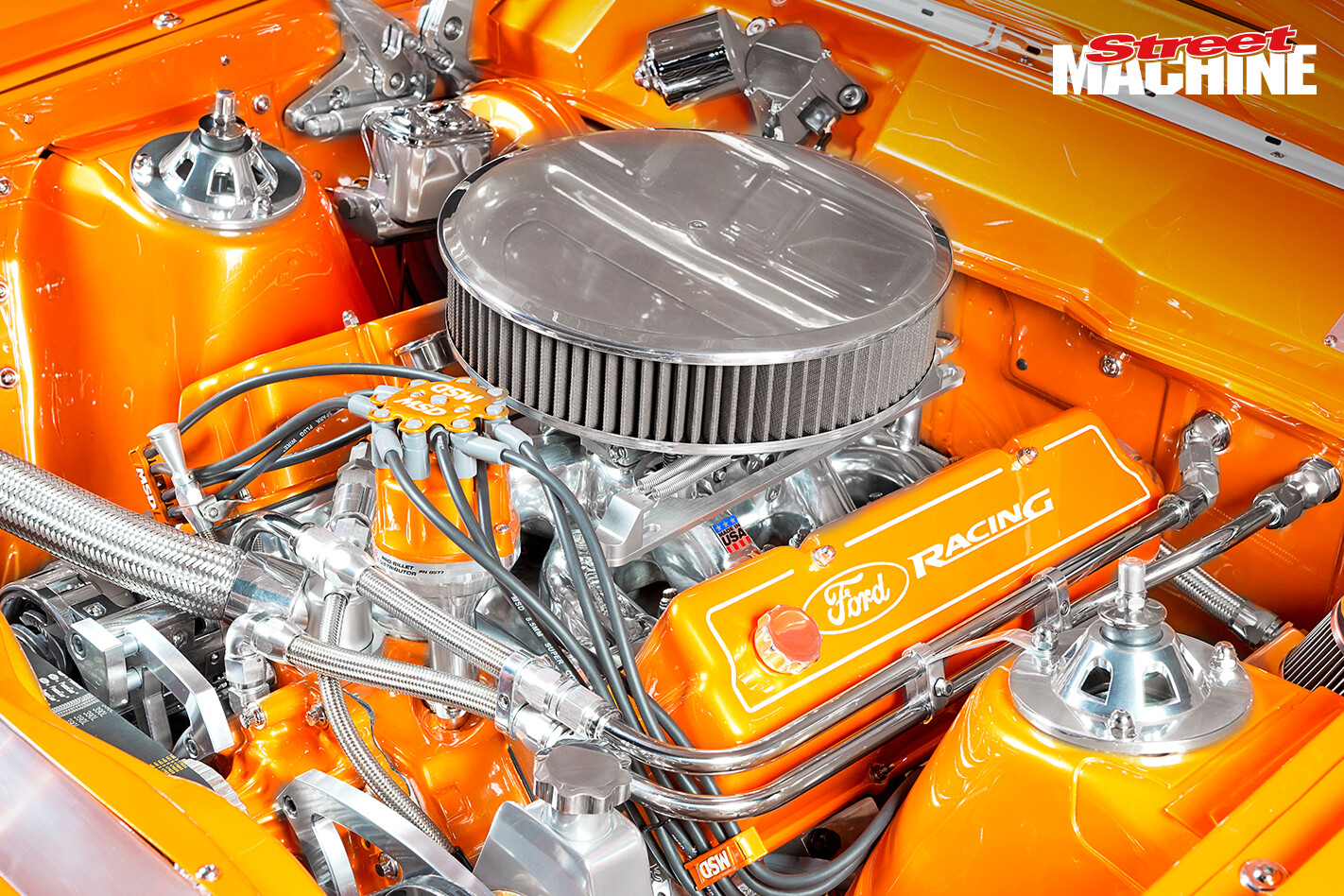 The 393ci stroker Clevo was bolted together by Mike at MP Performance, and it’s good for around 500hp. To the four-bolt block, Mike added a Scat crank and rods topped by SRP forged pistons. Heads are ported and polished Edelbrock RPM 2V alloy units, mated to an Edelbrock Air Gap manifold and Pro Form 750cfm carb. As tough as the engine is, it’s the way it looks that’s truly impressive. The block was deburred and painted body colour, and everything that’s been bolted to it has been supremely detailed; nothing has been overlooked.

Stunning March Performance billet alternator and power steering set-ups were used, and the Ford Racing rocker covers, AU twin thermos and MSD Pro Billet dizzy and coil were colour coded. Even the Fram air filter element is orange! Other engine bay highlights include the custom machined billet strut tops and radiator cap, Ring Brothers billet bonnet hinges and Browns Radiator Service custom alloy radiator. Other elements such as the master cylinder, wiper motor and battery have been so well detailed that they have become features themselves. Being the owner of Prestige Exhausts in Malaga, WA, Dom naturally lavished a fair bit of attention on the exhaust system. The headers are Pacemaker items that have been modified to clear the rack and pinion steering, and the exhaust system is a custom 2½in, mandrel-bent, polished stainless steel masterpiece, with custom mufflers.

The new engine was met with upgrades to the driveline and brakes, with a tough C10 auto and a 3200rpm stall converter by Gonzo at Allfast Converters fitted up along with a 31-spline 9in rear packing 3.5:1 gears.

Like the go side of the equation, the whoa side is not only extremely functional but also detailed to perfection, with ceramic-coated discs and polished calipers all round. A Hopper Stoppers front brake upgrade consists of 300mm rotors and twin-piston BA Falcon calipers, while out back, RRS rotors are clamped by single-piston BA calipers. The steering is also from RRS – a power rack and pinion set-up, spun by a Billet Specialties wheel and column. Much of the interior was to Dom’s taste when he purchased the car so the standard seats and door trims, which were neatly finished in white leather during the original build, remain unchanged. One area that did undergo changes was the dash, with Dom keen to update the way in which the Dakota Digital instruments were packaged. The solution was a custom-machined billet alloy cluster mounted in a colour-coded custom MDF housing which also encompasses the double-DIN touchscreen Alpine source unit. Other billet trick bits include the glovebox trim, rear-vision mirror, window winders and pedal pads.

The searing orange custom paint and white GT decals were applied seven years ago and are a credit to the painter, because it still presents as new. Indeed, it proved good enough to claim Top Standard Paint (along with Top Street Machine Sedan) at the 2013 WA Hot Rod & Street Machine Spectacular.

Show success aside, the car is no trailer queen. “I don’t just park it in the shed, I’ll drive it any chance I get,” Dom says. “It drives like a brand new car. It’s just a nice cruiser; I didn’t want to go too far over the top with it. I might build another engine for it eventually, but I plan to just enjoy it for now.” 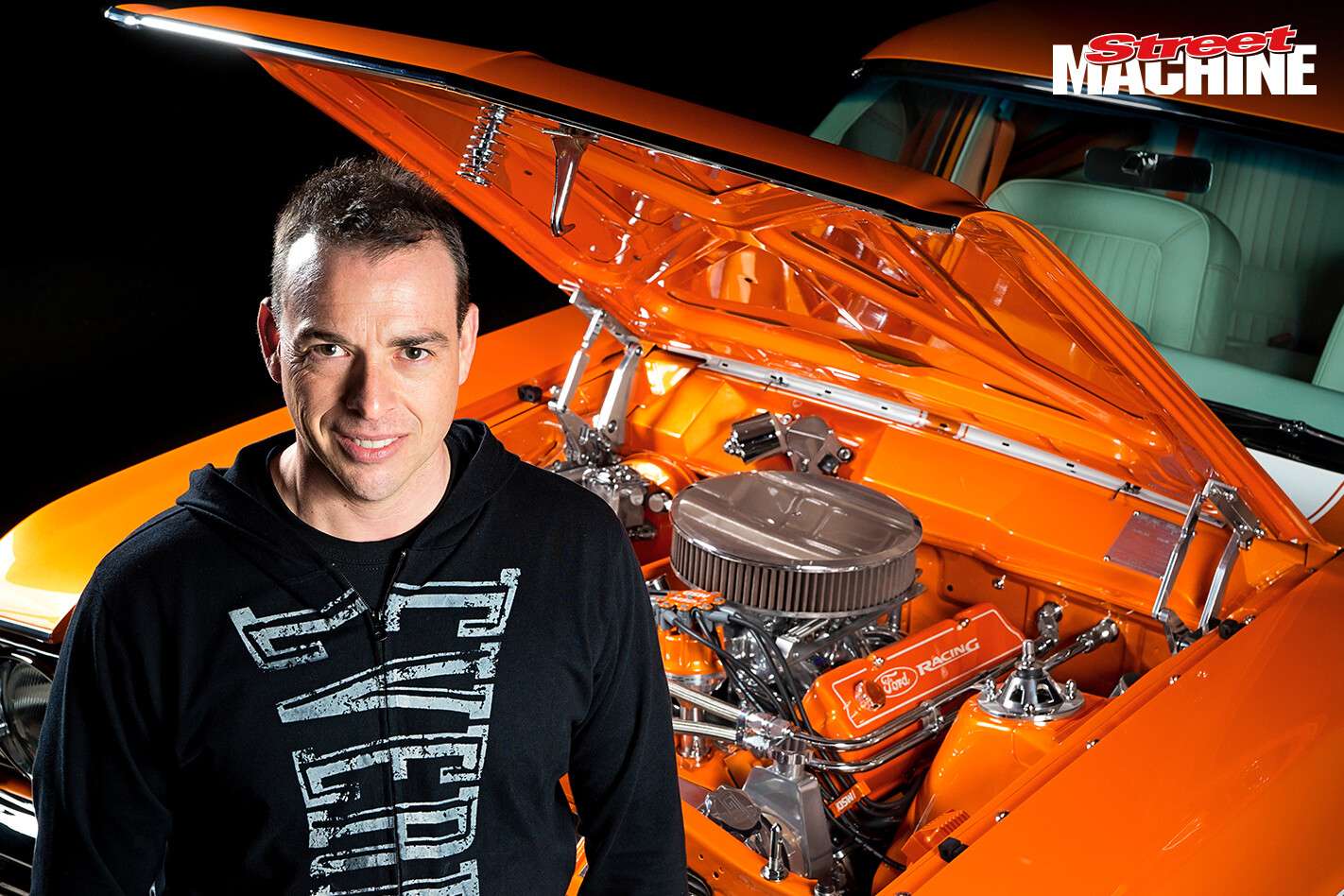 Dom’s so stoked with the finished product that he’s thinking about building a twin. “I wouldn’t mind doing an XW ute in a similar colour so that I had a matching pair.” If that wouldn’t put a smile on his dial every time he opened the shed door, we don’t know what would!