Packing a 400hp LS1, six-speed manual, mini-tubs and zero chrome, MR NUTS walks its own path on the mean streets of Sydney

NICK Ursino always wanted a tough LH Torana sedan but the 24-year-old mechanic from Harrington Park didn’t want it to look like just another Pro Street warrior from days gone by. “I’d always wanted one with mini-tubs,” he says, “but one that was different to all the others I’d seen. 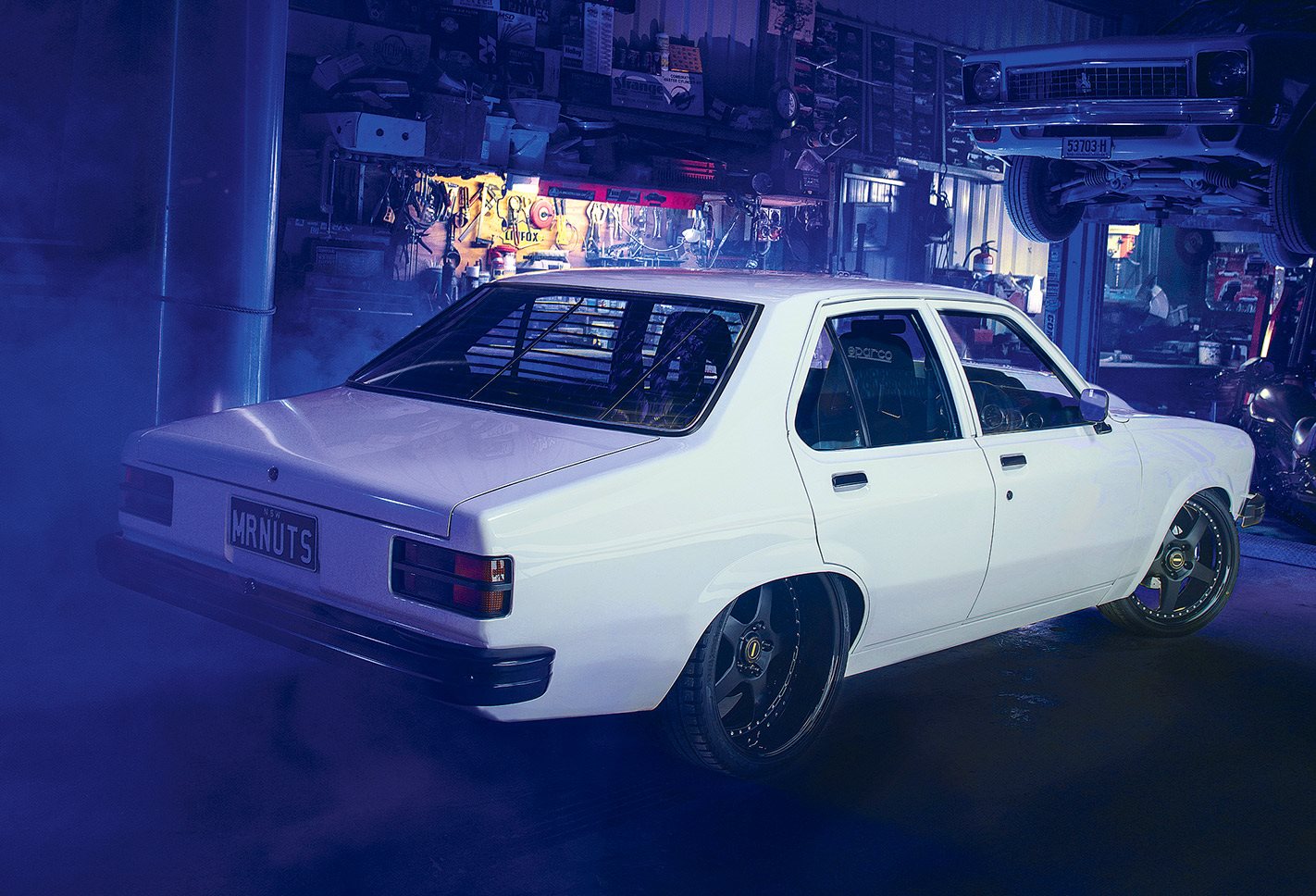 One major styling change on MR NUTS is the blacked-out brightwork. “The black detailing was always my style,” Nick says. “When I picked up the car the first thing I said to my mate was it was going to be white with everything else black. It was never going to have any chrome on it. It's exactly how I pictured it!”

“This car started off as a stocker I bought from an old lady, which I found on Gumtree. It was a driver, just a normal run-of-the-mill car you find online. I got it home and that weekend I stripped it to a bare shell. I had some 15x10 Chasers and I started cutting up the car to suit them.” 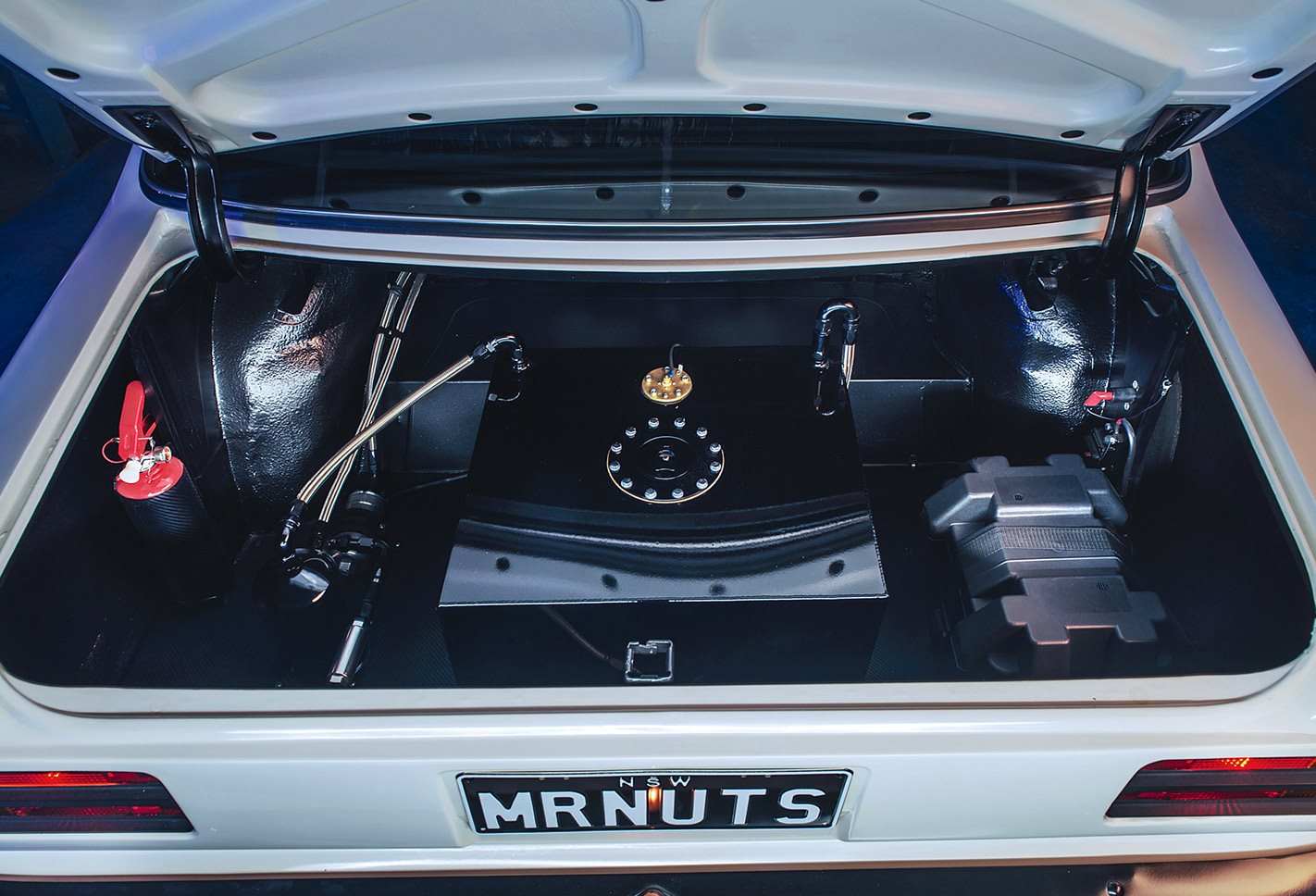 With skids in mind, Nick turned his attention to the driveline. “It was always going to be a manual, and I was going to throw a small-block Chev in it,” he says. “But I ended up going LS1 because I wanted fuel injection as I work with carby motors and was sick of having problems with them. Plus, to get 400hp out of an old small-block is expensive, and the LS1 gave me the six-speed. And I know if I blow it up I can go to any old wrecker!”

While even a stock VT2 LS1 has more grunt than any factory LH ever had, Nick wanted his sedan to really crack, so he got to tickling the internals for sharper response and more peak power. 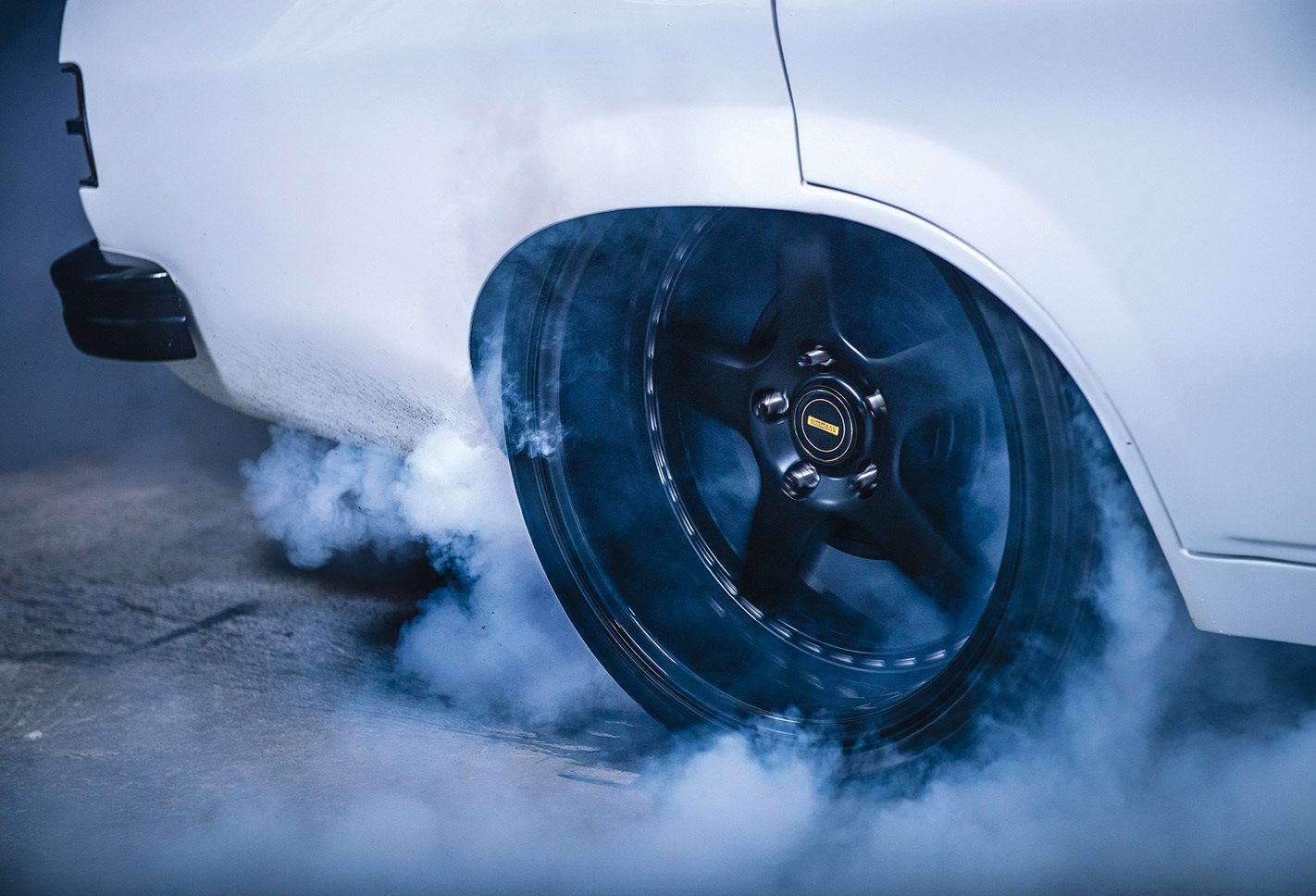 While mini-tubbed muscle cars aren’t known for their cornering prowess, Nick reckons MR NUTS doesn’t mind the twisty stuff. “The car has solid bushes and handles without any body roll in it. It was so much fun around the track; it fries the tyres in every gear”

“I’m a mechanic so I rebuilt the engine myself,” Nick says. “I did conrod bolts, fresh bearings, decked the heads and put the cam in it. Russo tuned it and it makes over 400hp at the treads. There was a bit of trial and error with this engine because I decked and ported the heads to get some more compression but I wasn’t sure if the ratio would turn out right, but it was perfect.”

The engine mounts were easy enough to sort, but fitting the motor and massive T56 gearbox required some mucking around to get it all bang-on in the very limited space available. 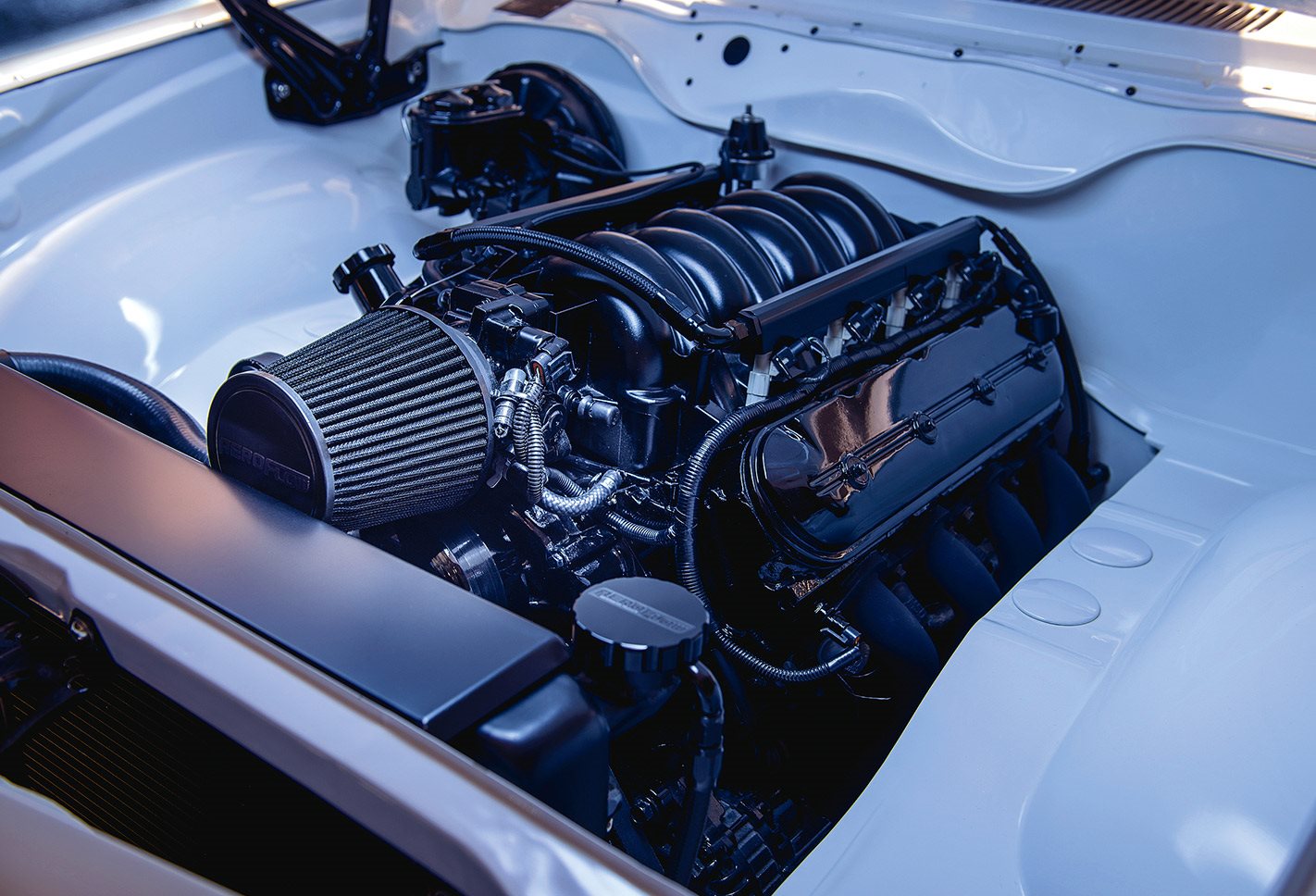 “I used a Tuff Mount kit to suit HQ and Torana, and then I made up a set of tri-Y headers. You could buy the pipes off the shelf [these days], but they weren’t around when I started,” he says.

“We had the engine and ’box in and out five times because we tried a couple of different Camaro sumps that were wrong, then I got the Moroso, which I modified to get it all a little lower. I also did the remote oil filter.” 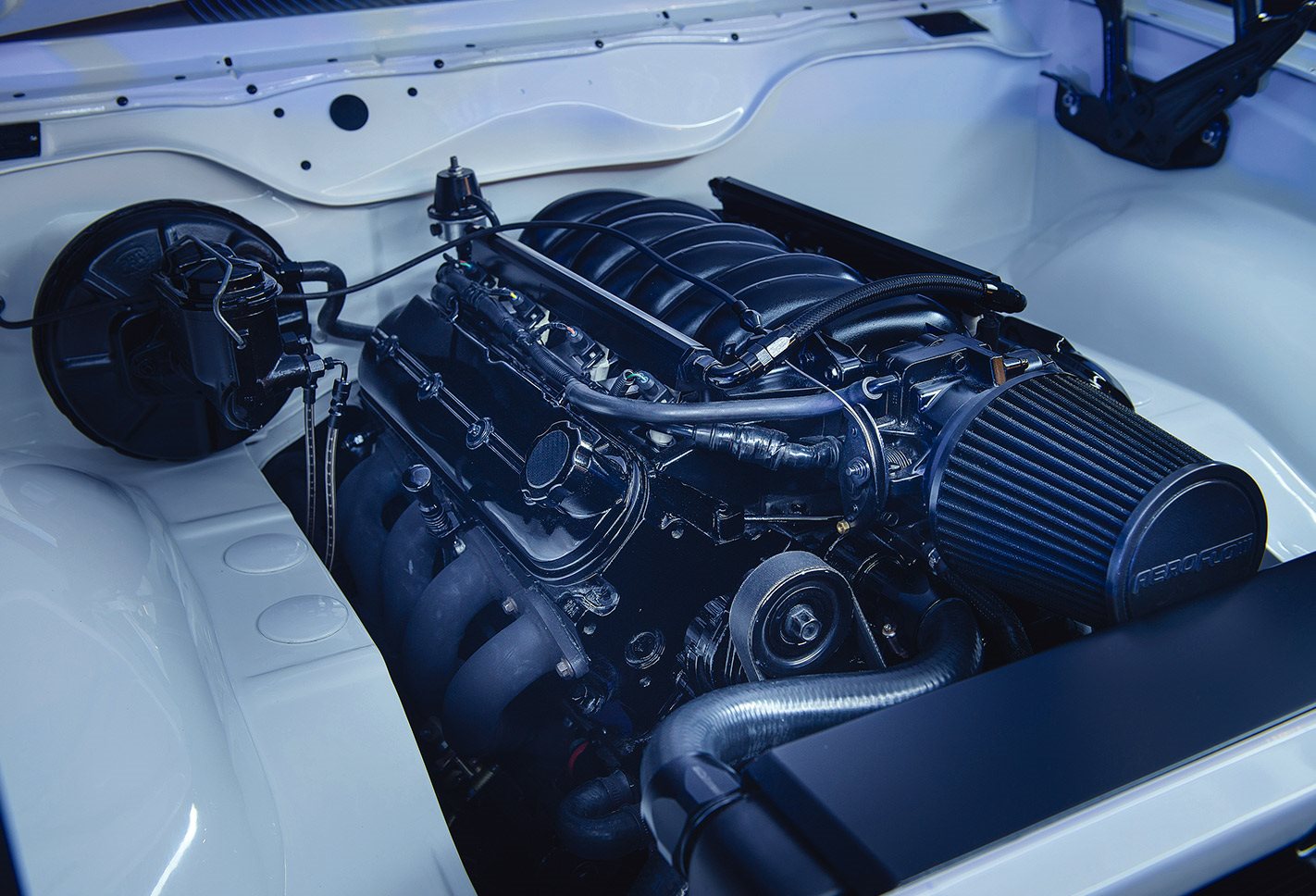 Along with making a custom transmission tunnel, fitting the huge Tremec six-slot ’box into such a small car meant a lot of head-scratching and fiddly work for Nick. However, he wouldn’t have it any other way.

“I had to do a custom clutch pedal box, and that was a mission,” he says. “But cruising in top gear it’s doing 2200rpm even with 4.11s in the rear, and six speeds make the car more exciting to drive.”

The Strange centre is housed in a nine-inch diff turning Strange 31-spline axles, and driven by a three-inch tailshaft with billet universals. Nick also threw Strange coil-overs under the rear, while the front features King Springs and Wilwood disc brakes. 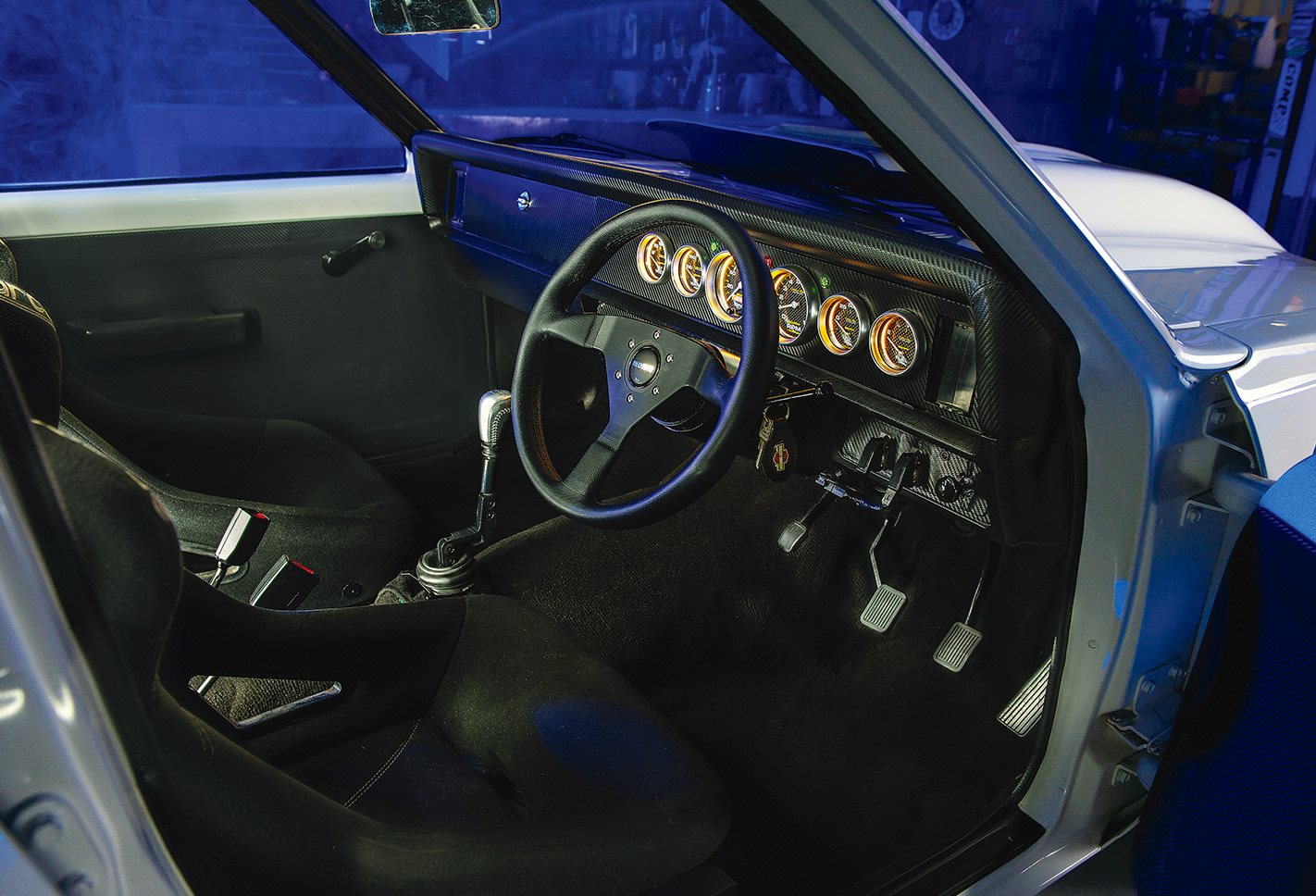 “We did the trim ourselves,” Nick says. “We just bought door cards off the internet and covered them in carbonfibre wrap, and did the same with the dash. I got a sheet-steel insert bent up and covered that in carbon wrap too”

“The car was dummied up as a driver and then my dad Peter did the body, the flat firewall and smoothed the engine bay himself,” Nick says. “I did the tubs, transmission tunnel and coil-overs myself. We bent it all up out of sheet metal and made it look factory.”

While many killer cars benefit from the owners’ mates working in the trade, the cool feature of MR NUTS is that it was totally built by Nick and his father Peter grinding away after hours. 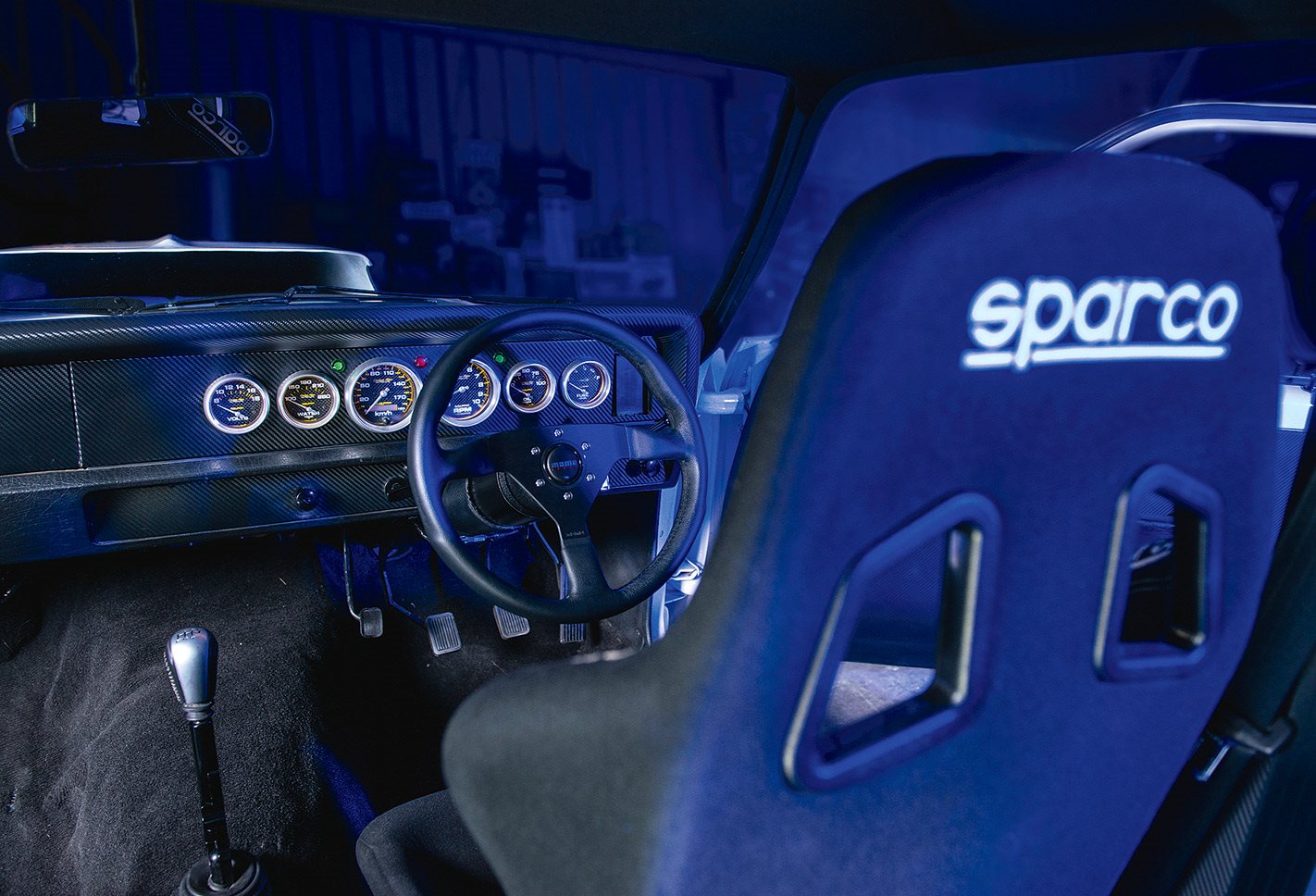 “I’ve always been a manual guy,” Nick says. “I had a VL Turbo with an auto that made good power but I had nothing but problems with the gearbox. I always wanted to drift, too; at Powercruise, I was trying to hold it like a drift car”

“I worked on it every night after work,”

Nick says. “The whole car was built from start to finish by my dad and me over two years. And my dad isn’t a panel beater; he’s a mechanic too! 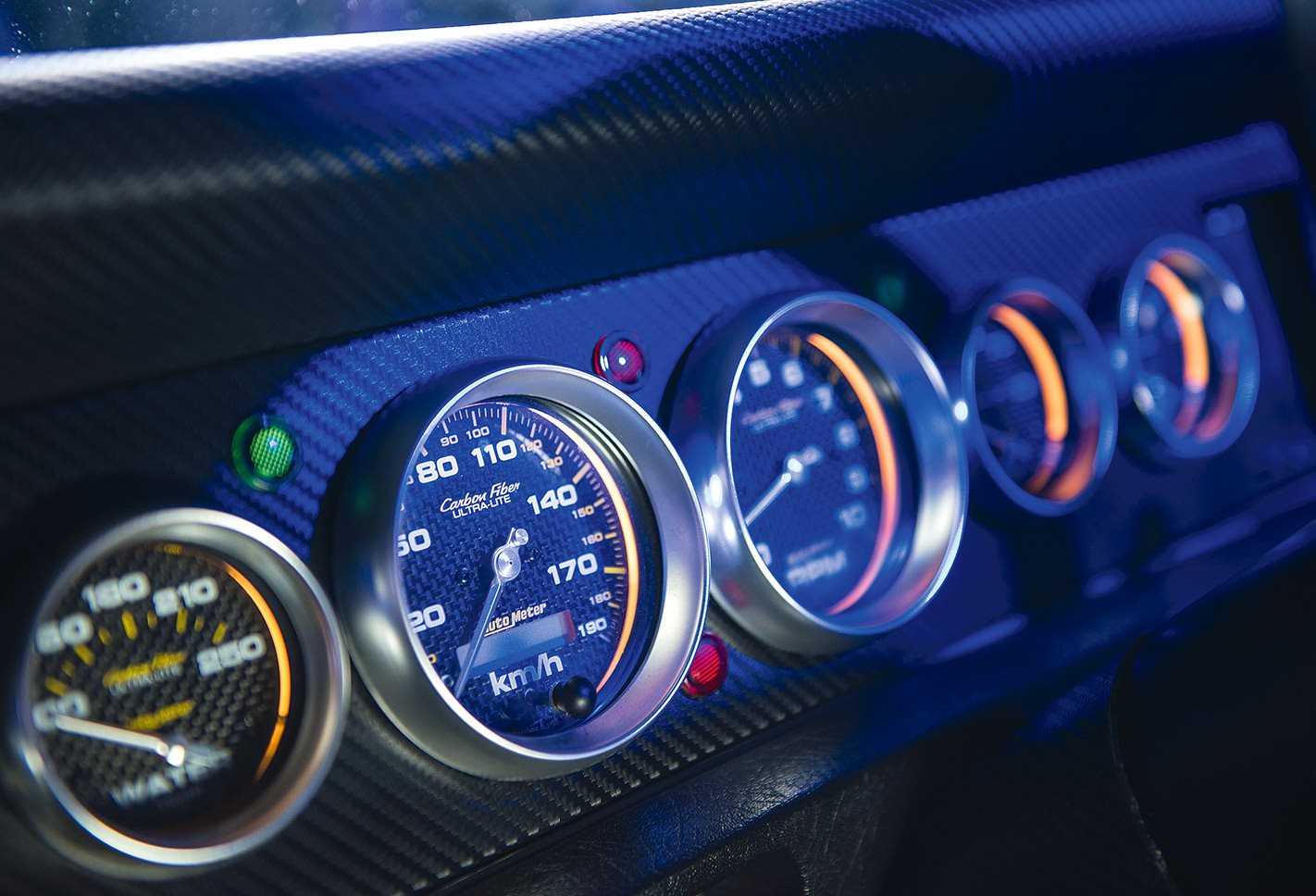 “I remember Dad was doing the rear quarters and he had them all ready to go, ready to paint the next day. I came home from work and he’d rubbed them back and started again because they weren’t perfect. He spent a month alone on the driver’s guard!”

Peter also shaved the aerial and door locks and added the four-inch reverse cowl to the bonnet before he laid down the Alaskan White duco, with contrasting black detailing for an added dose of menace. And there is plenty of performance to back that menace, especially given the LH’s super-light tare weight. 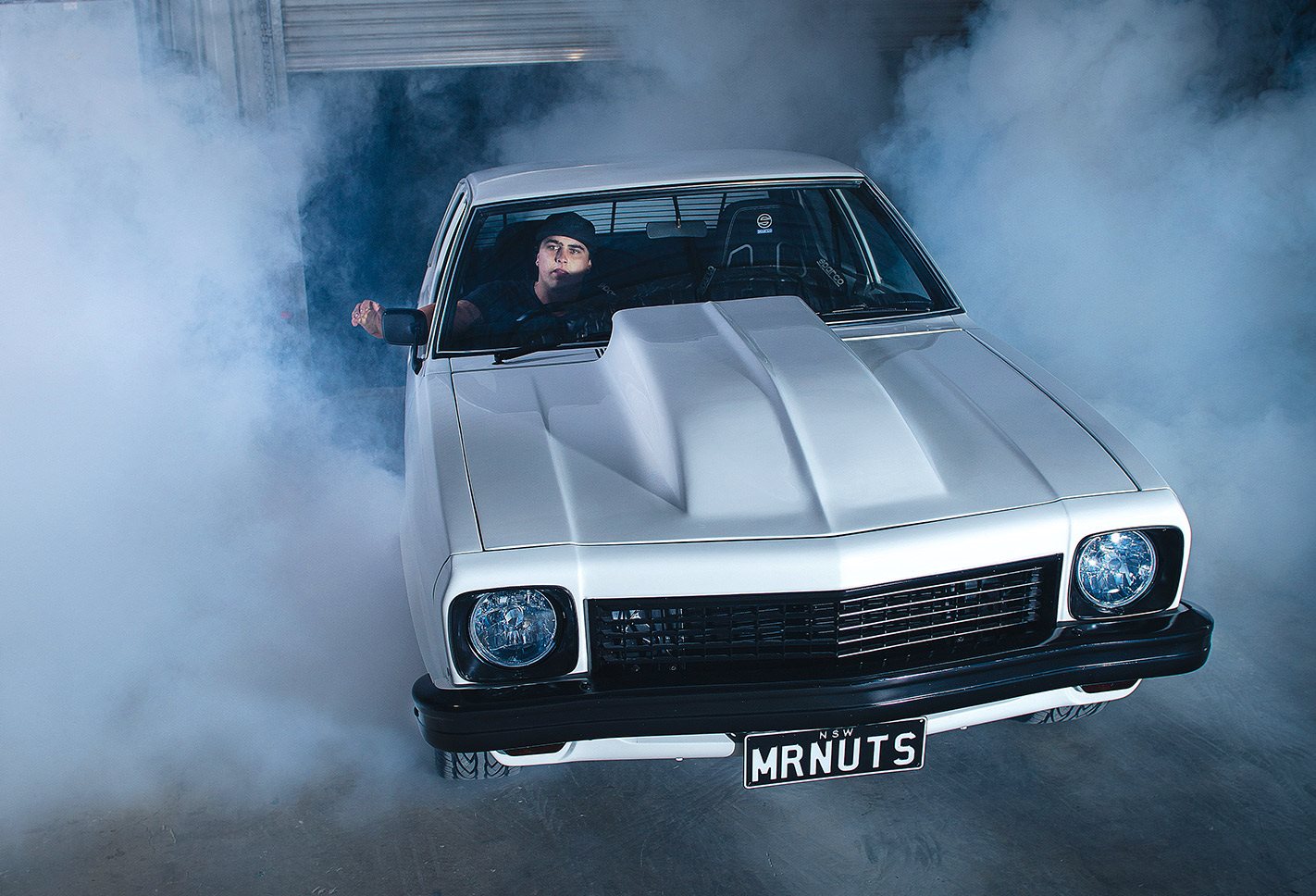 “A standard Torana with a 308 in it weighs around 1220kg, but my car weighs only 1200kg, as finished, on the Eastern Creek scales,” Nick says. “To offset the extra weight of the nine-inch, there’s no heater and just a sheet-metal boot floor with the fuel cell.

“It was built to be a burnout car and that’s what I intend to do. I’ve got an L98 at home ready to go into it, so eventually I want to do a blown L98 with injection running on E85. It’ll be fun when I go blown but I’ve got to save up some more money first.” 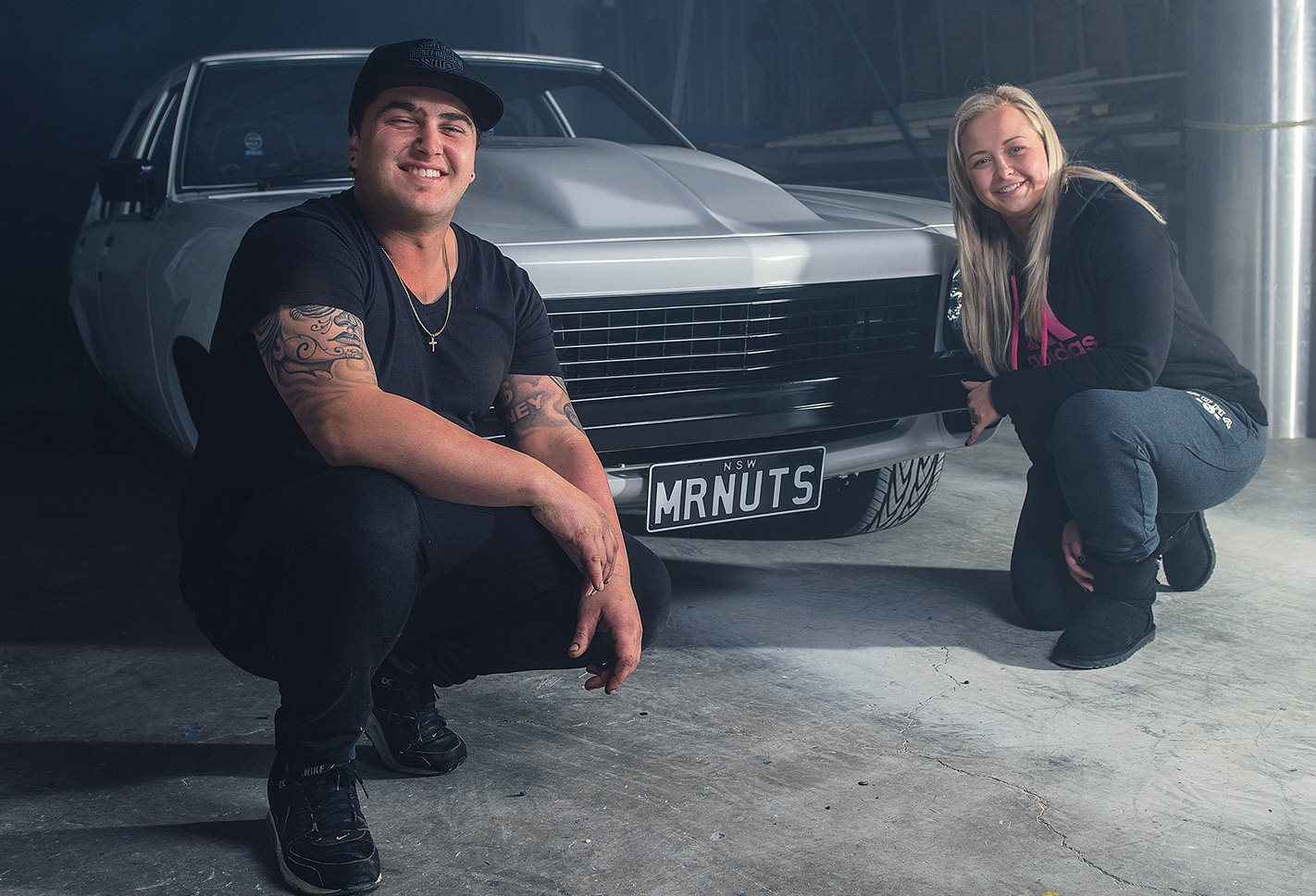