Steve Burgess is a Mopar man to the core but spent 25 years daydreaming about the next time a tough Valiant could be called his own.

“I’d owned a VH Pacer and a CL Regal back when they were only a few years old,” he explains, “but got caught up in the all-too-familiar family/kids/work revolving door.” 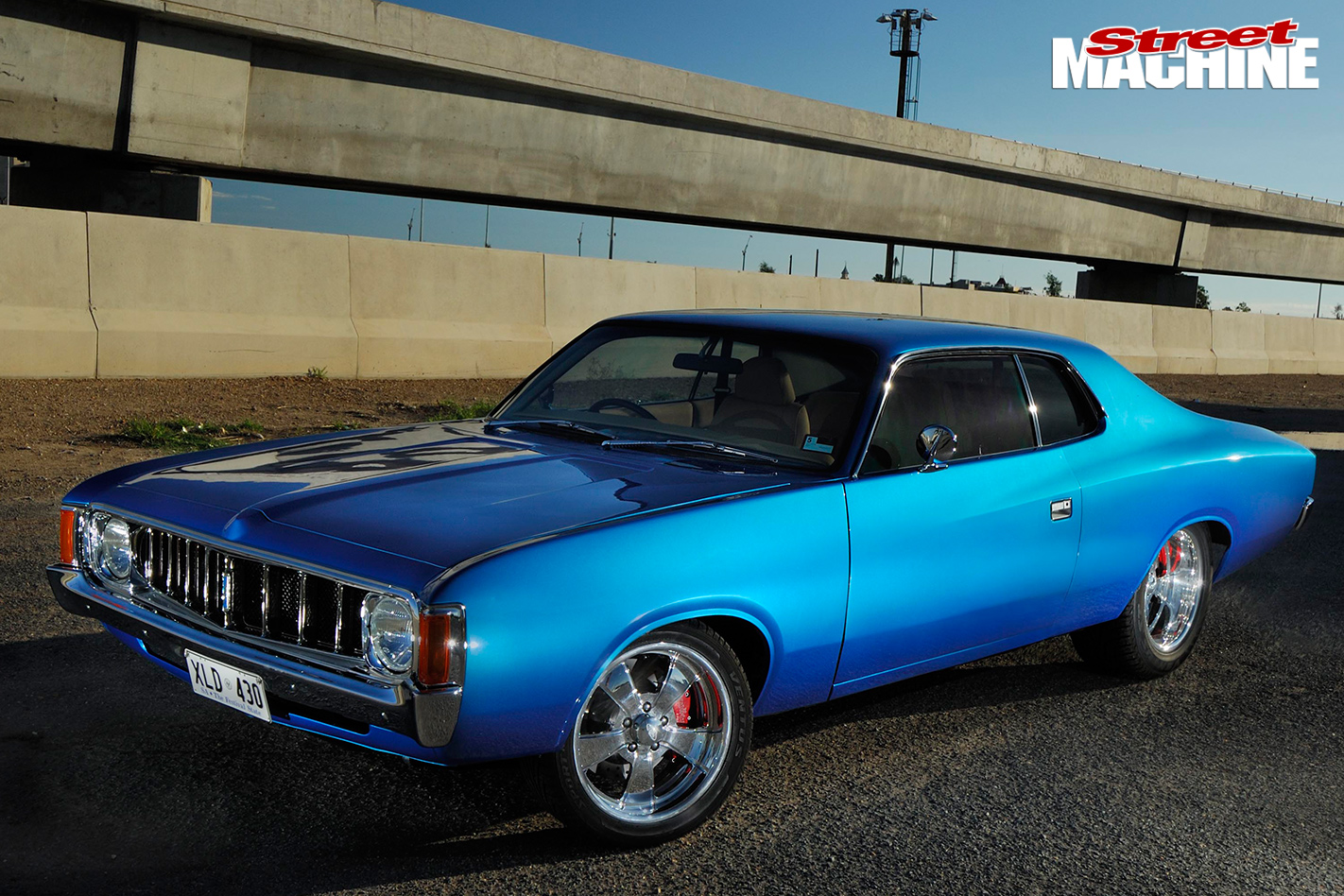 A chromed VK Charger grille adds weight and attitude to the front end and complements the Ford Blueprint paint. Wilwood brakes peeking through Nitro V-rod rims are part of the modern underpinning to this classis shape

A period of illness was the kick in the bum he needed to get back on the wagon, and in 2007, with full support from wife Kathy, the dry spell was broken with the purchase of this ’73 VJ Valiant Hardtop.

Although the Burgesses’ hometown of Adelaide is regarded as the hub of Chrysler in Oz, the rarity of these big coupes pushed the search further afield.

“We bought it from the Blue Mountains. It was your basic green and vinyl-roofed Val of the era but it was a registered and drivable factory V8, which was a bonus. The killer was a huge roll-back sunroof, which was a real pain in the arse, but the rest of the car was virtually rust-free which overshadowed how bad that bloody sunroof was!”

Safely back in Adelaide, the VJ was driven for six months before Steve stripped it for an engine rebuild and to sort the gaping sunroof hole. The vinyl top was removed — permanently — any excess chrome and badging was shaved and the turret repair got underway using a modified skin from a VJ sedan. 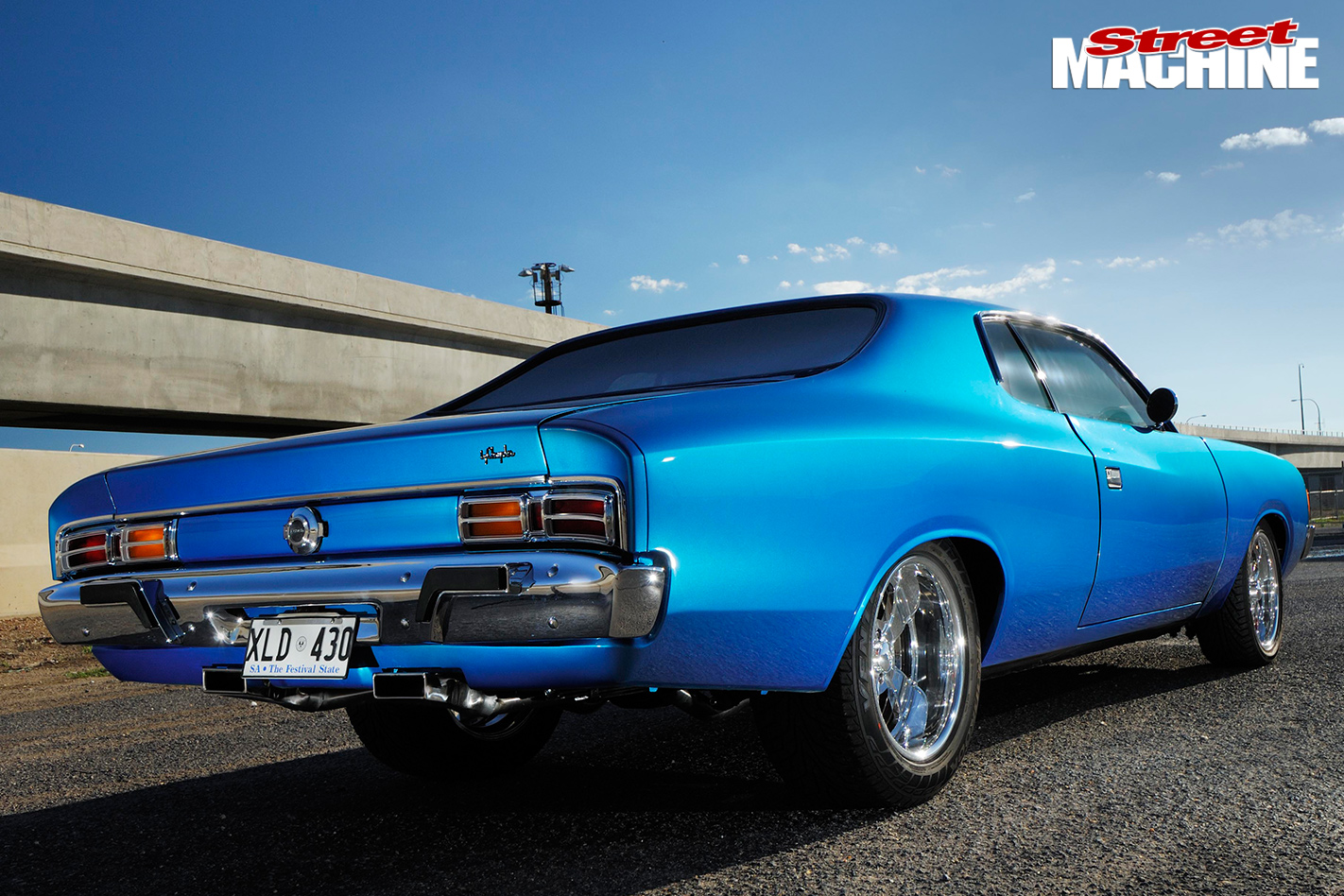 ’Cuda-style exhaust tips exit through the notched rear pan. The extra length of the big coupe is evident with those swoopy rear quarters, and the tubbed rear end features a 3.9-geared nine-inch and relocated springs

“I was struggling to get the roof skin to match up perfectly, so I sent the car to a local panel shop to get that sorted and to have the engine bay remodelled to get the inner guards as symmetrical as possible. We decided to hunt for another coupe roof skin and ended up buying a supposedly rough donor VH Hardtop; a closer inspection saw that the VH was too good to chop up, so it’s sitting in the shed waiting its turn!”

So back to square one. A sedan roof was duly modified to fit but soda-blasting revealed a substandard repair to the right rear quarter. And this extra work at the panelshop gave Steve too much time to think.

“Ideas kept swirling around my head and before you knew it I was saying: ‘That’d be nice’ to nearly everything.” 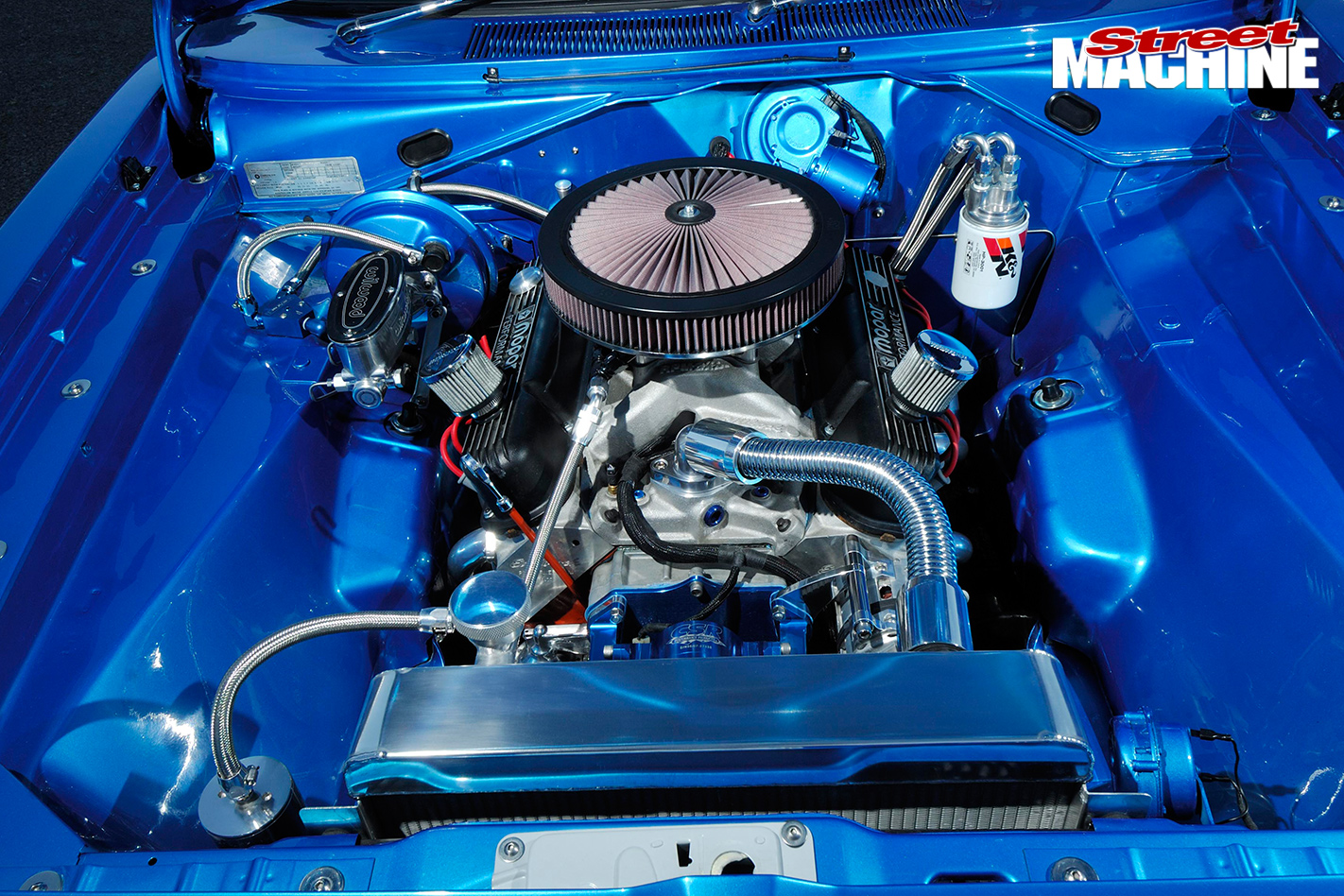 A 550hp, 408ci small-block built by Hippo Race Engineering runs a CSR water pump and hefty alloy radiator to make it street-friendly. The detailed engine bay was remodelled to make it as symmetrical as possible

The rusty boot floor and damaged fuel tank were perfect excuses for wheel tubs, the boot-mounted custom tank and repositioned filler, while the rear springs were shifted inboard to seal the deal on Steve’s dream wheel and tyre combo. With the panel and rear chassis work completed, the VJ was treated to a shiny coat of Ford Blueprint then brought home for reassembly. The bumpers were rechromed, a neat touch being the chroming of the plastic VK Charger grille, which gives the front a heavier presence and attitude.

The driveline wasn’t forgotten in all this. In fact waiting all those years meant the factory 318 and 904 Torqueflite combo just wasn’t going to answer Steve’s needs. A larger 360-cube small-block was the plan. These could actually be optioned on Chrysler Hardtops, though the restrictive factory carb and exhaust set-ups strangled what should have been a great set-up.

Instead of speccing a great engine then kneeing it in the balls, Steve sorted the breathing woes by commissioning Simon Lazarevski from Hippo Race Engineering to screw together a stout 550hp 408. 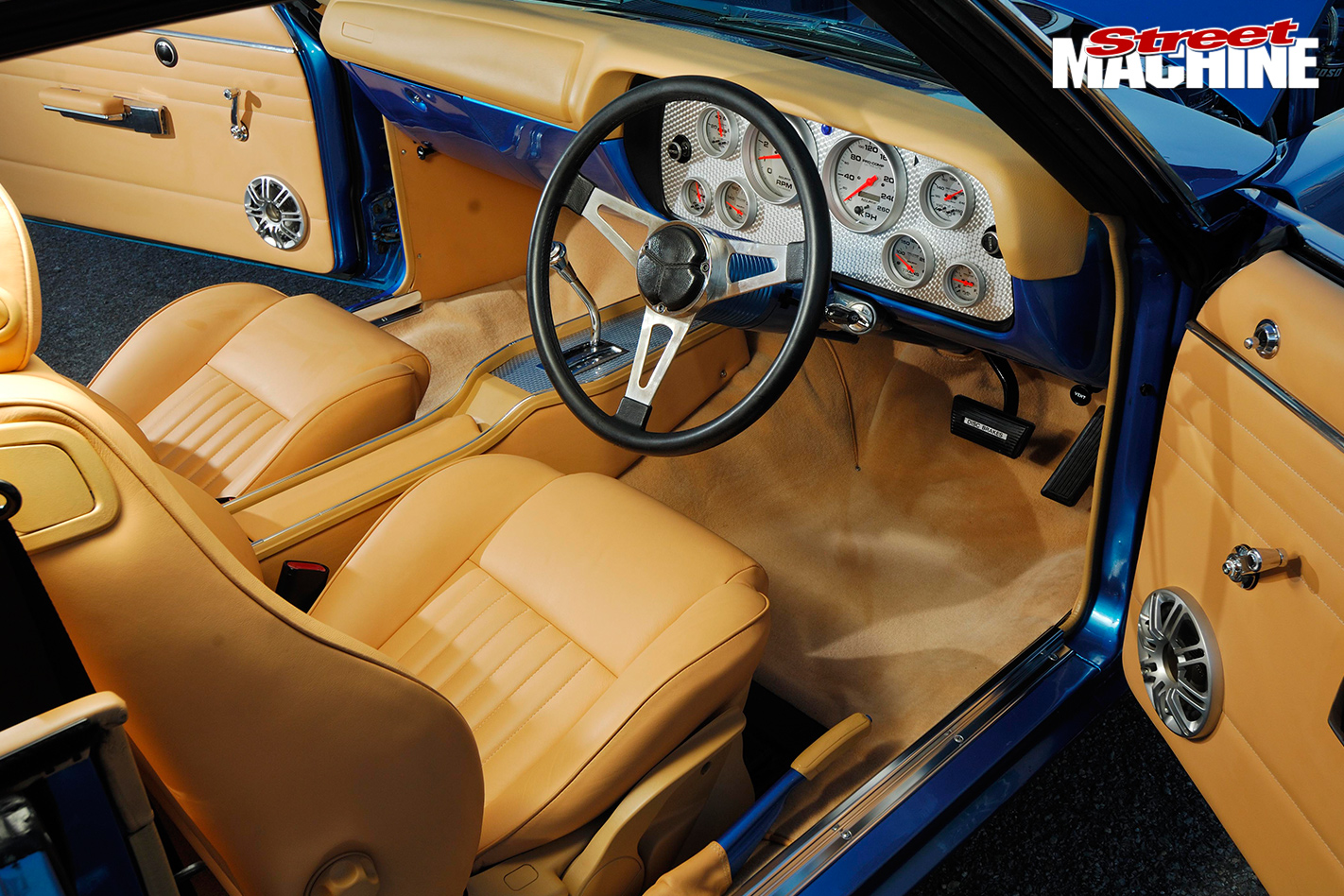 Massaged Edelbrock alloy heads are topped by an Edelbrock RPM Air Gap intake and Holley Ultra 950 carb, while the exhaust starts with a set of Pacemaker headers that flow to a twin 2½-inch stainless steel system with ’Cuda-styled tips exiting through the rear pan. The trans is a 727 Torqueflite packing a shift kit and 3000 stall, with the standard BW rear was replaced by a nine-inch running 3.9 gears.

Valiants aren’t renowned for their fantastic handling but the torsion bar front ends and leaf rears respond well to minimal tweaks — Koni shocks and a Hotchkiss swaybar tie-in with 2in-lowered front stub axles and 2½in-lowered rear leaves. Steve then added rack and pinion steering and swapped the pressed factory upper control arms for tubular versions. Braking was also drastically modernised with slotted and drilled Wilwood discs and a vacuum pump to ensure great pedal response. Wheels are Nitro V Rods measuring 17x7 at the front with 18x10s under the arse, shod with Hankook 225 and 285 rubber respectively. 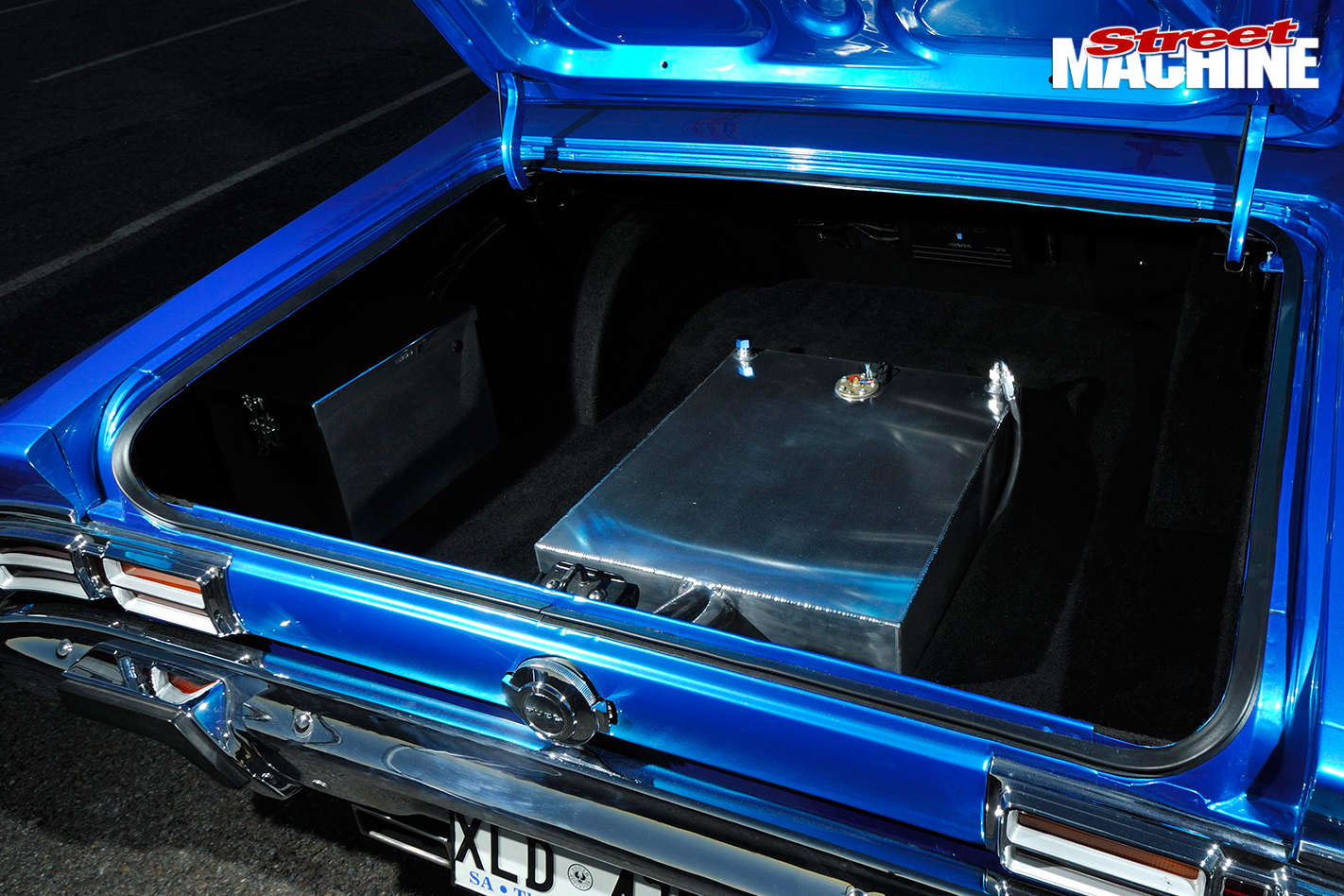 Rust in the boot floor and a battered tank prompted Steve to go for tubs and a custom alloy tank with a flip-top cap on the rear panel. The battery is nestled off to the side with the boot cleanly and simply trimmed in black

The bamboo leather was handled by Jeff’s Trim Shop and the interior is a neat blend of modern appointments alongside factory styling. Alfa Romeo buckets tie in nicely with the original rear seat and door trims, while the 770 pushbutton shifter, console and three-spoke wheel are complemented by Auto Meter gauges mounted in an E55-style aluminium facia.

With the VJ finished, Steve is keen to make up for lost time and get stuck into the VH coupe for Kathy. That will feature a carbed version of the new 5.7-litre Hemi. Steve’s son Troy is gradually being weened off modern imports and seeing the Mopar light, so a third Chrysler may join the Burgess clan in the not-too-distant future.