PAUL Burnet is a Kiwi racer with a career in touring cars that goes back to the early 70s. In conjunction with Phil Pagan at Track Sport Engines and Craig Hyland from Engine Dynamics, he’s been developing a billet 202 block for a number of years.

That development is now complete, and the block – topped with a J.ZED head – is now in Paul’s LJ Torana GTR XU-1 race car. The new combination has punched out 422hp to the rear tyres naturally aspirated, which is pretty impressive from a six-pot. The most power they could reliably produce with an OEM block was 390hp – at the crank – so this is a serious step up. 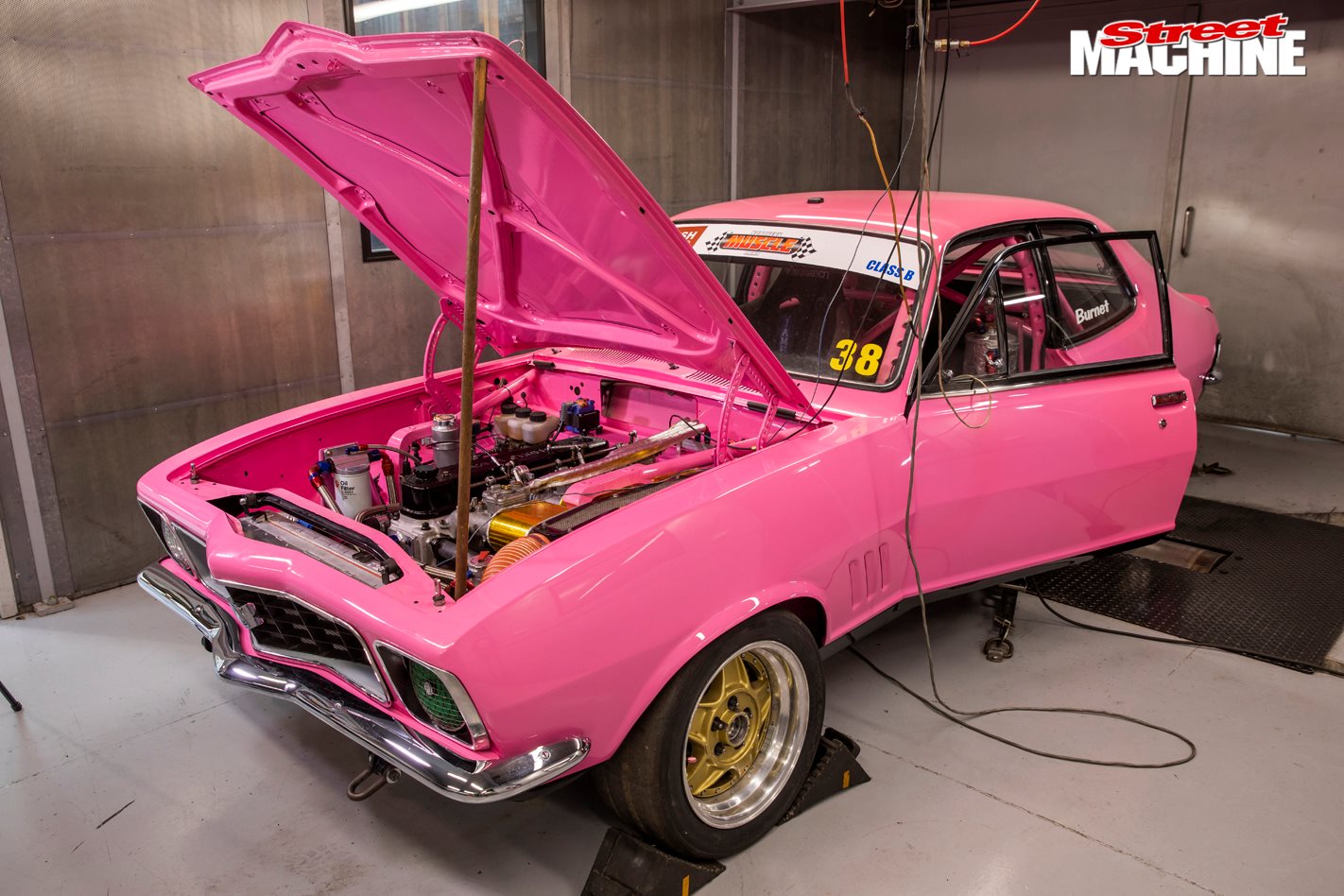 Paul races his Torry in the Northern Muscle Cars Club series. The club was formed to organise races for pre-’83 muscle cars, and what’s nice to see is that they’re not a bunch of historians, so the rules are a little looser than the historic touring car classes, but not quite as free as the Touring Car Masters.

“We built the new car in 2007 and took it to Muscle Car Masters with a cast-iron head, and it went quite well,” Paul says. “Then we went again in 2009 with the J.ZED head on it, but when we got it back home and out of the container we noticed it had split the bore. We sleeved that block, but we were still having problems blowing head gaskets, even though the compression wasn’t that high.

“We then had Cometic make some head gaskets for us – at considerable cost – and put an electric water pump on the motor,” Paul continues. “That sort of solved the problems, but we were still having some water leakage issues, just not to the same extent. We were racing eight or nine times a season and racing it reasonably hard, but there was a lot of maintenance. After a while, Phil said: ‘Why don’t we make a block?’ He had worked on some billet blocks before in jet sprint boats and said we could probably get one made.”

Of course, the people running Chevs and Fords have got race blocks they can buy, but if you’re running a Holden six you don’t have that luxury. So really, this was the obvious path to take. 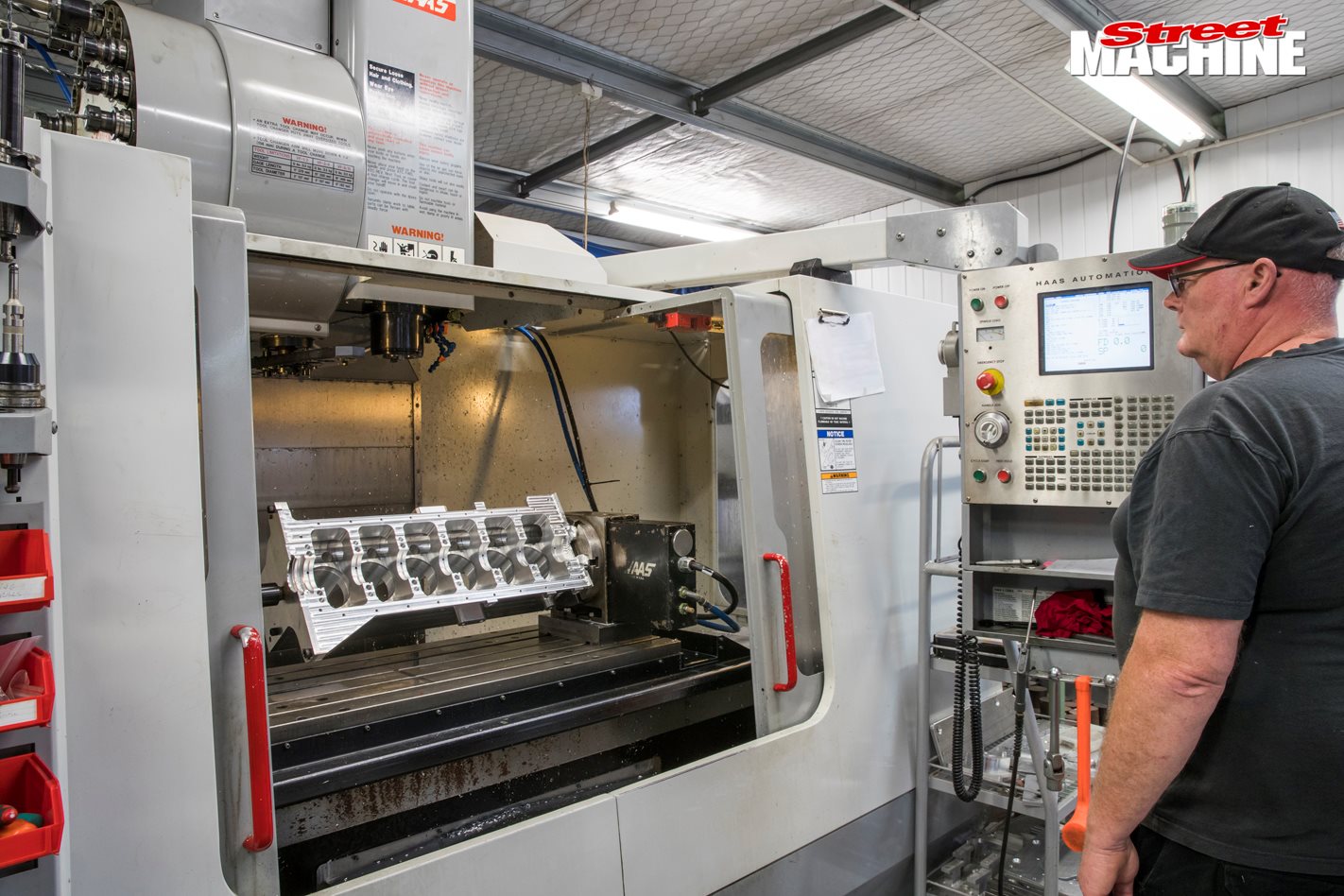 The first version of the block wasn’t very successful and basically had to go in the bin, but version 2.0 had a lot more time spent on computer-modelling the design, thanks to the expertise of Alex Lean. The main problem they had to overcome was the cylinder liner design. Due to the pushrod holes being very close to the bore on Holden sixes, the recommended dimensions for the liner saw the lip cutting into the pushrod hole, so Phil redesigned the liner so that the lip was much narrower.

You might think that one of the advantages of the billet block would be weight saving, but that wasn’t really a consideration, as Northern Muscle Cars rules state that the competitor must add ballast above the front axle line equivalent to any engine weight difference. If anything, Paul should be allowed to take weight out of his car, as the completed billet block will probably end up slightly heavier than the original cast-iron version. “The liners are unbelievably heavy – 2kg each!” he says. “Plus, all of the bolts have to be longer with an aluminium block.” 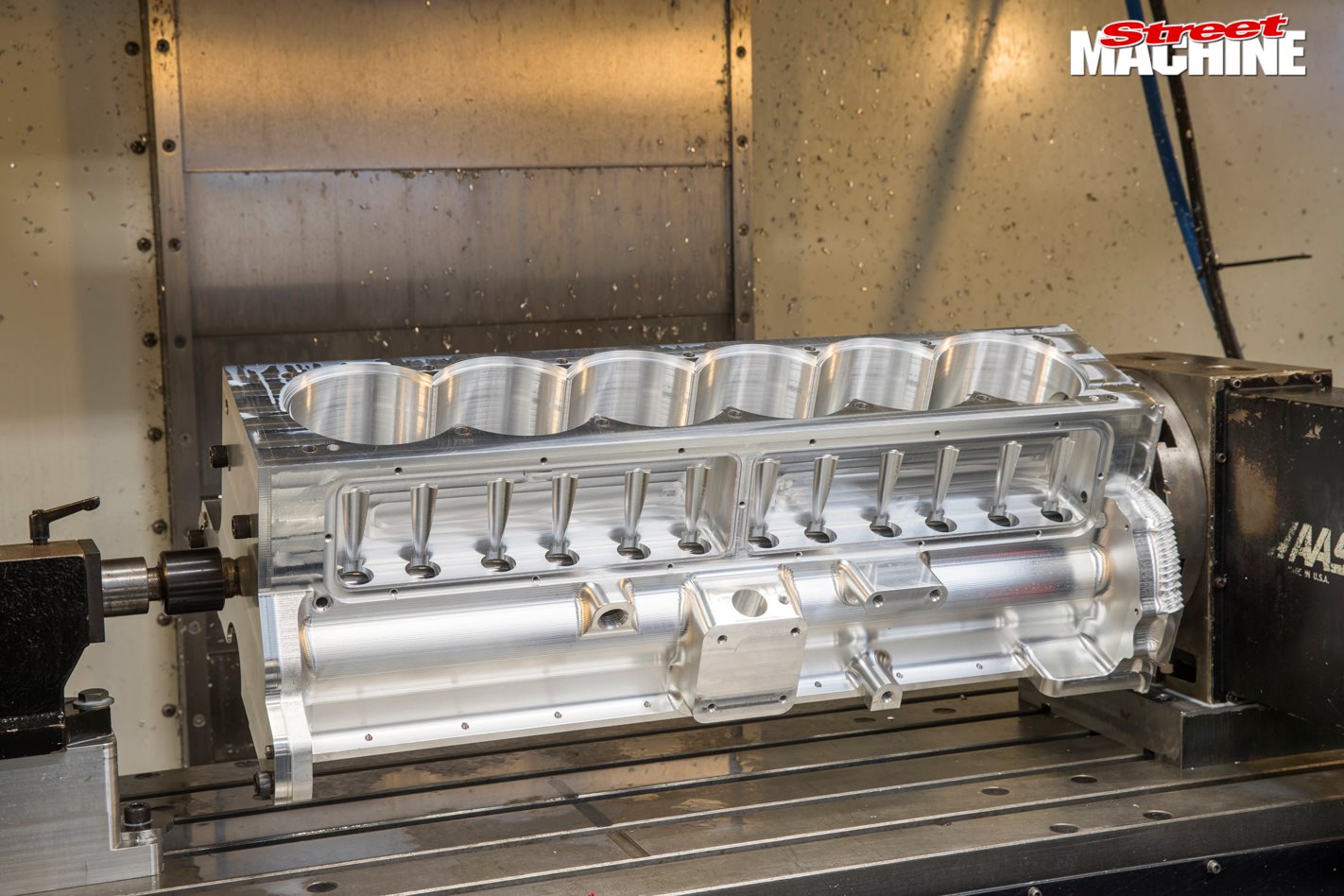 The general design specifications don’t differ much from the factory block, with the only obvious differences being the four-bolt mains and strengthening ribs on the intake and exhaust side of the block. But this is by no means a bolt-in replacement for your regular Holden six. For a start, it has been specifically designed for the J.ZED head, and the use of an electric water pump means standard mounting points for bracketry and accessories aren’t there.

The cooling system is also quite different to standard. “Because of the problems we had with block one, Phil decided not to run any water between the block and the head. The block’s water is plumbed separately from the head,” says Paul.

If the block was to become commercially available, that’s something that would need to be addressed, as the current set-up means that the firewall needs to be modified so that coolant fittings can be run from the back of the head. There are not too many people that would be willing to cut up their car to that extent.

On the upside, the block is at least 50 per cent stronger than the OEM block, which would most definitely be useful for those wanting to run a boosted combination, even though it’s no slouch with the aspirated combo – that’s for sure!

“Out of the factory block we got about 390hp at the engine, and this one is about 450,” Paul says. “Phil did a little bit of head work and raised the compression because he knew he was going to be able to keep the head on it.” They’re also allowed to run avgas under the rules, so that helps. 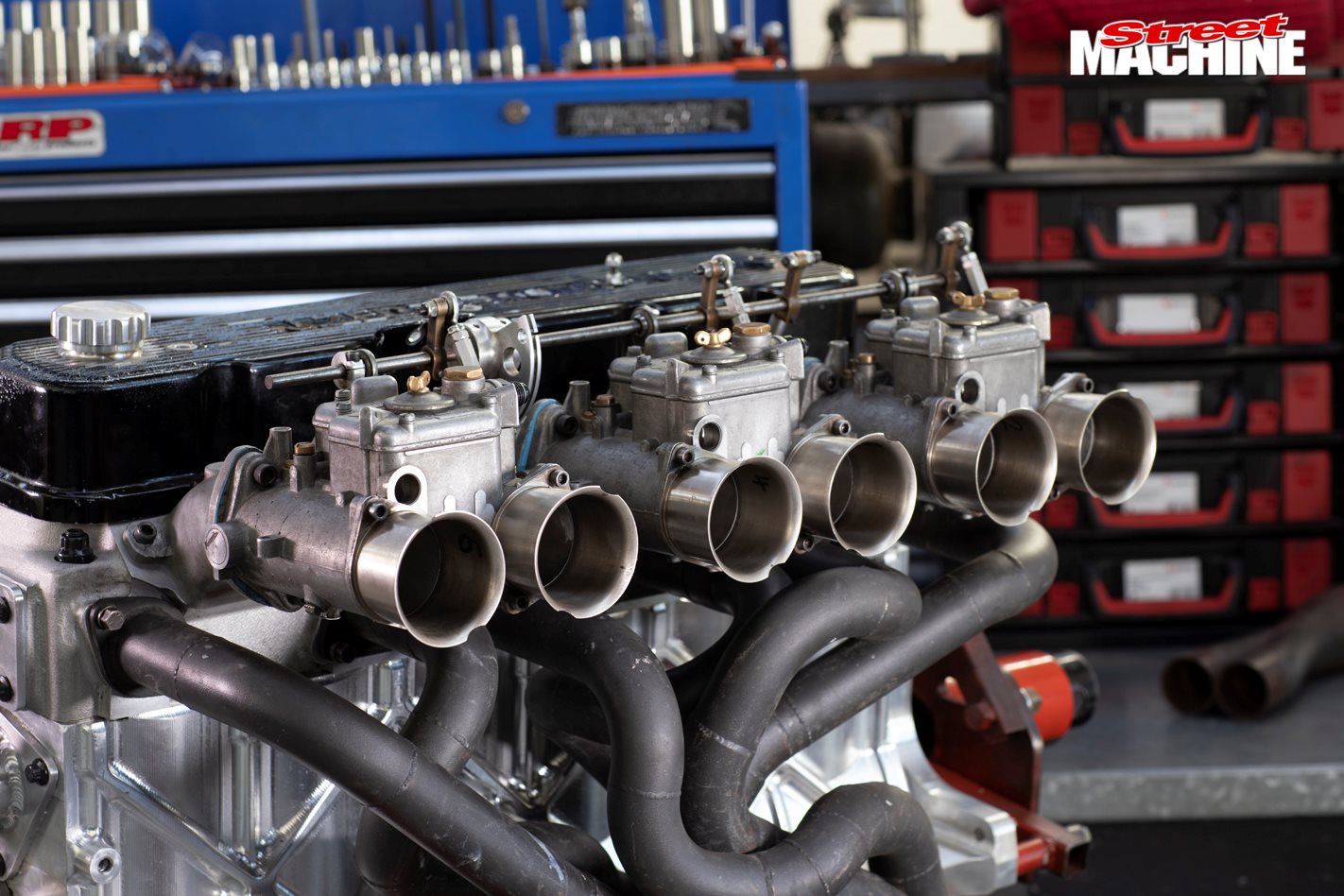 It’s a pretty serious induction system though, with a trio of 55mm Webers! “As recommended by Joe Zullo [Mr J.ZED himself],” Paul explains. “We thought they’d be too big. We have run 50s on it when Phil dynoed it, and he said the 55s definitely went better, even though he shifted the jetting from one set of carbs to the other.”

The engine also needs a larger set of headers, which is something they worked out on the flow bench, but they haven’t been built yet because they wanted to get the car running sooner rather than later.

It's probably time to come clean about this mighty 202. Its capacity is in fact 237ci thanks to the 3.450in stroke on the Auscrank steel crank and hefty overbore, which by my calculations comes in at 200thou larger than stock at 3.825in. If you’re into metric engine capacities, it’s just shy of 3.9 litres. To complete the rotating assembly, there are custom Carrillo rods and JE pistons and a compression ratio around 11:1. 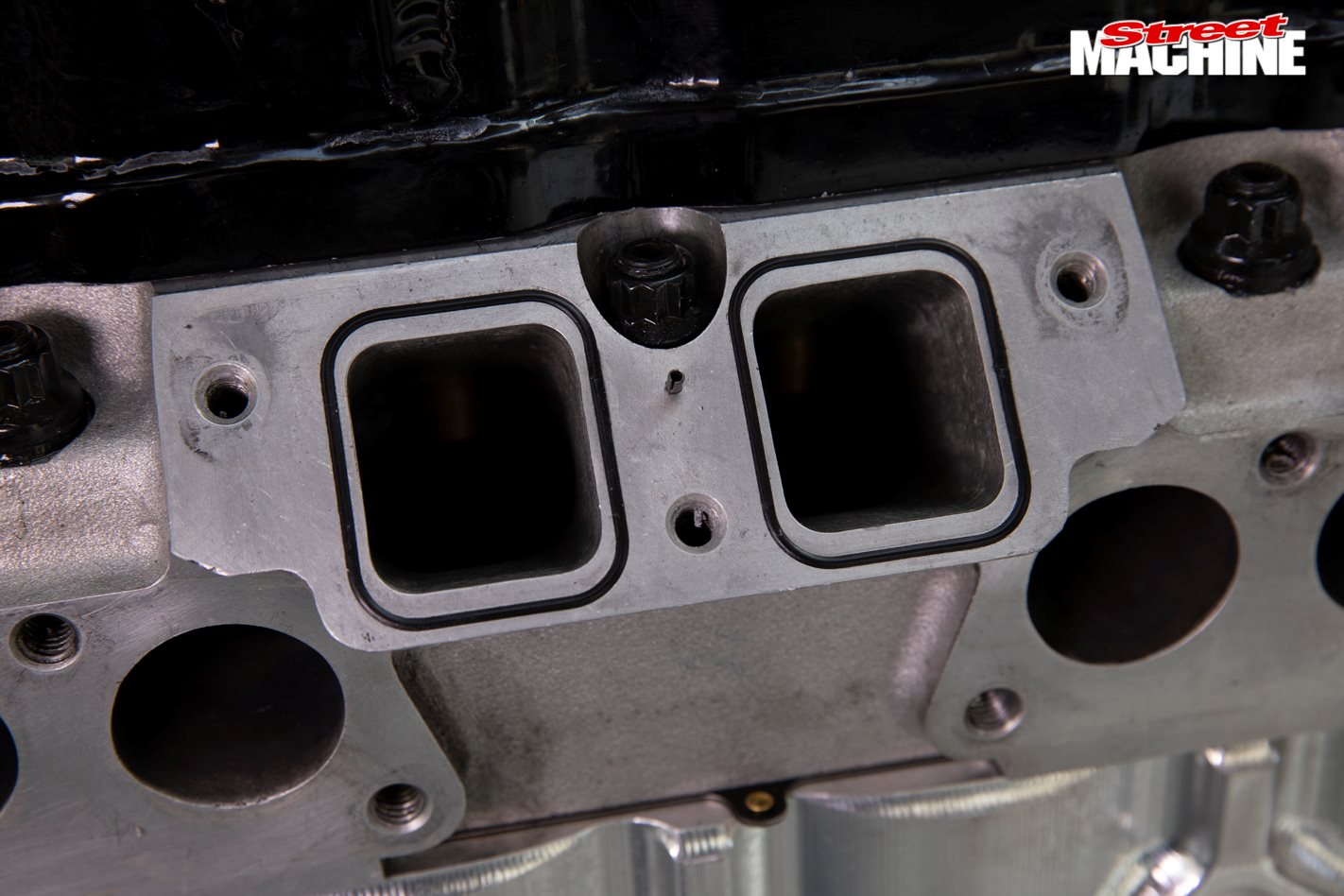 The J.ZED head is about as good as it gets for a Holden red. Based off the original design by Frank Duggan, it has been further developed by Zullo and has pushed his front-engined dragster to 7.70 ETs. The cast-alloy 12-port design features 1.925in intake and 1.500in exhaust valves, with longer valve stems to allow valve lift of more than 700thou! The most obvious difference with the J.ZED head is the raised and angled intake port location, so you won’t be bolting your single-barrel Strommie onto it.

Of course, all of this work would have been pointless if it hadn’t resulted in quicker lap times. “We’ve gained about three-quarters of a second – which is a lot – over a 1:13 lap time at Hampton Downs,” says Paul. Mission accomplished, then! 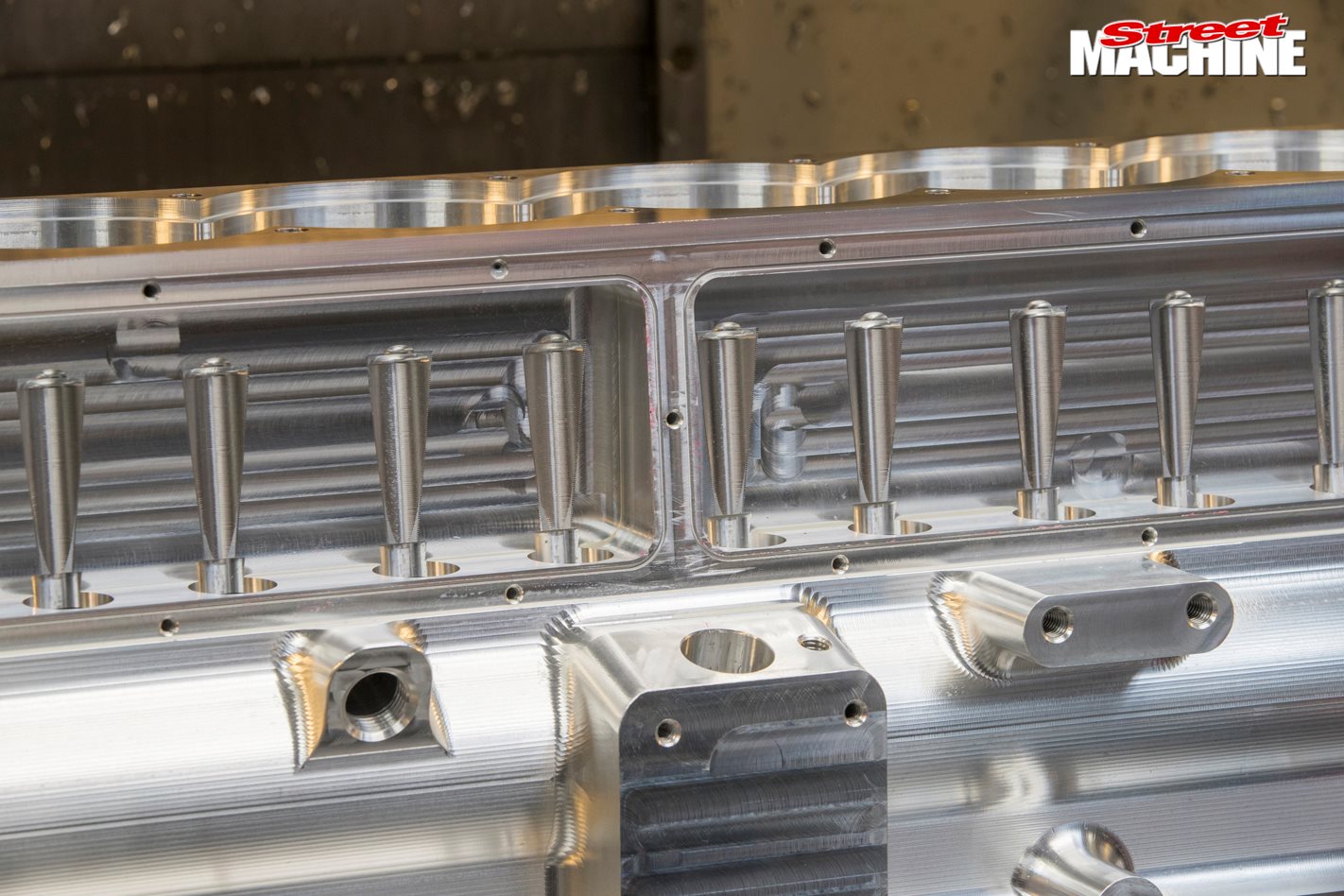 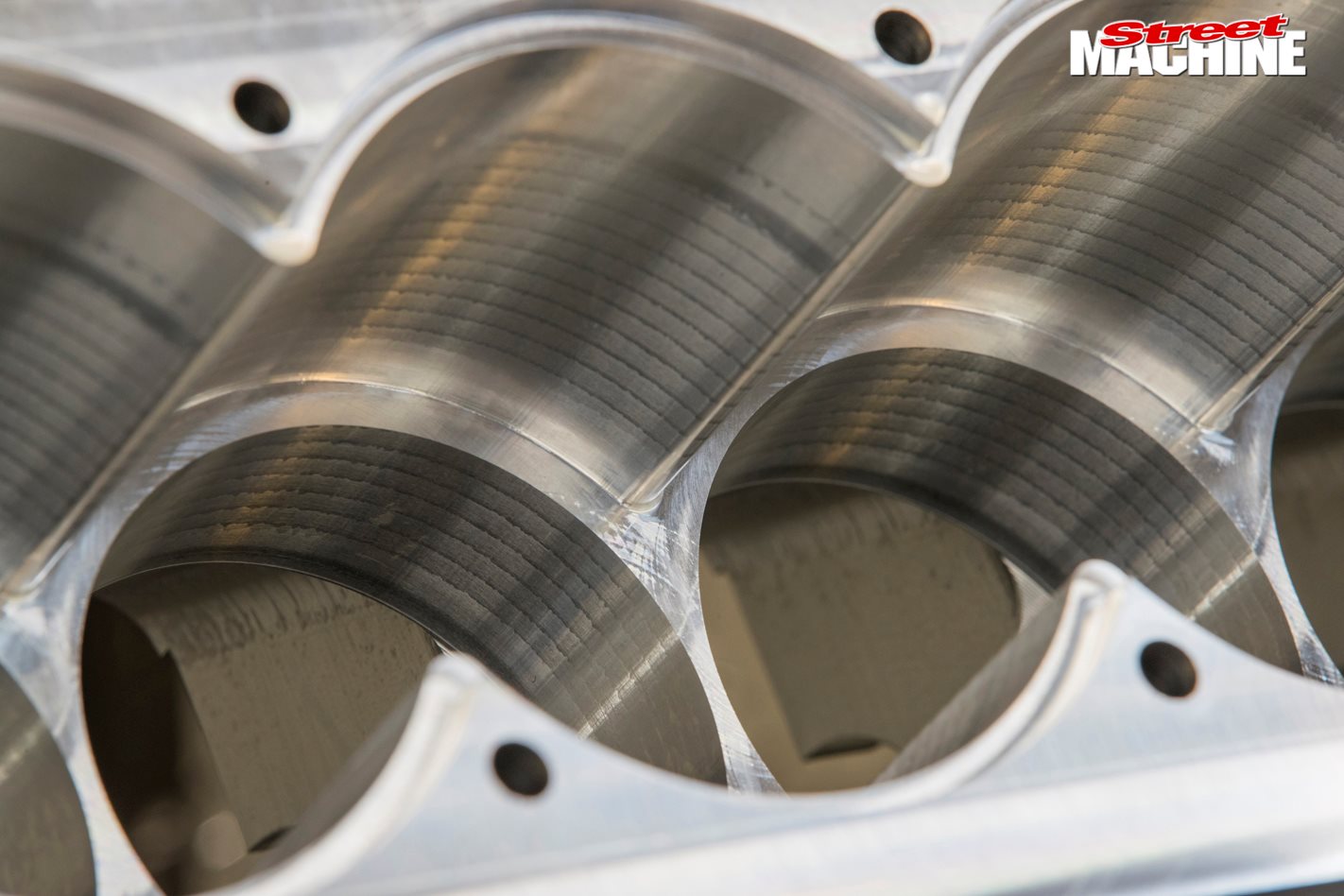 The block is machined to accept Darton sleeves. 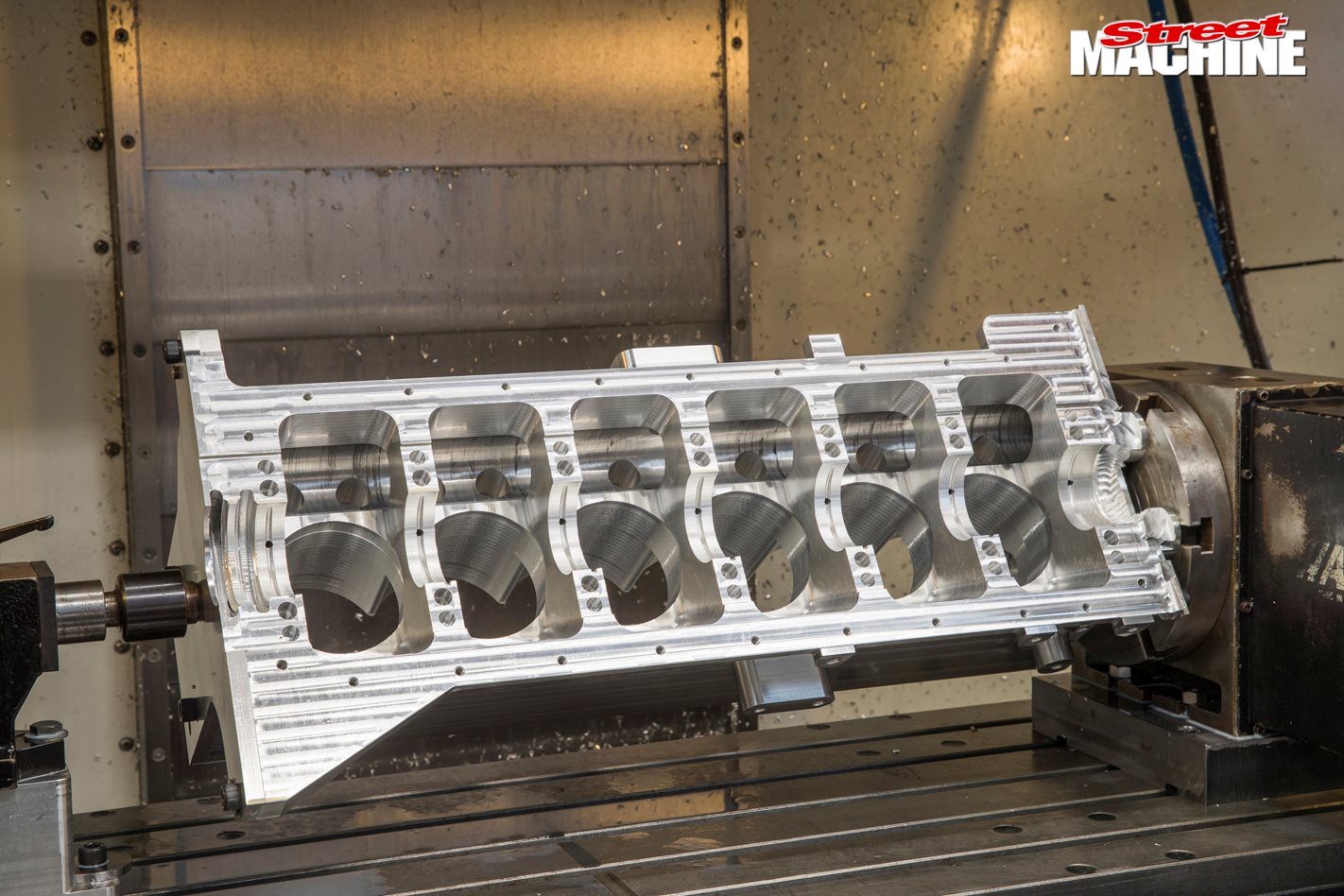 Later versions of the block may not have four bolts on the front and rear main caps, nor four-bolt mains on all seven bearings, as this requires a custom sump. 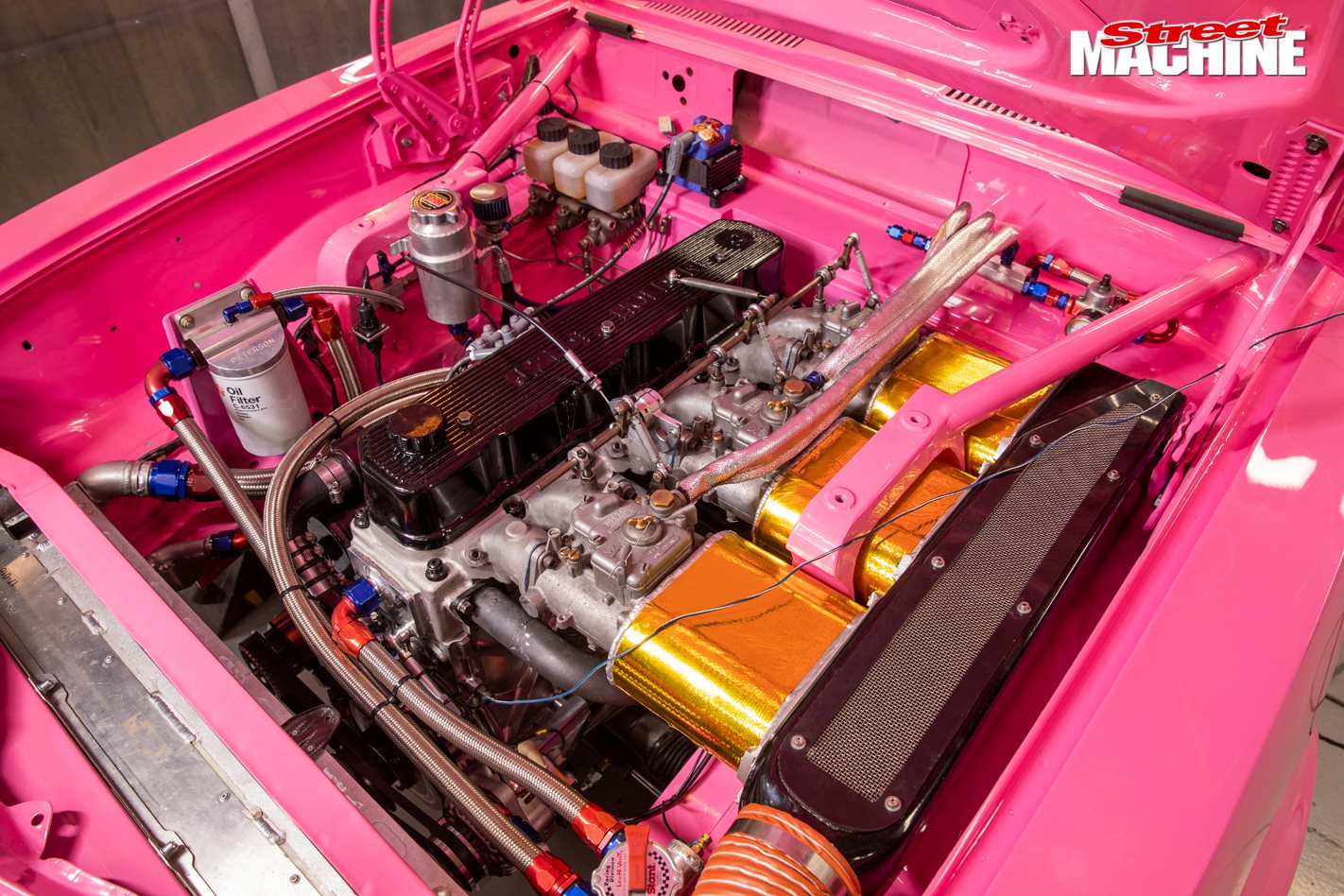 The top of the intake plenum is actually mesh. It was never designed be like that, but the motor never ran right with a solid top, which they believe was due to the air being pressurised and the Webers not liking it. 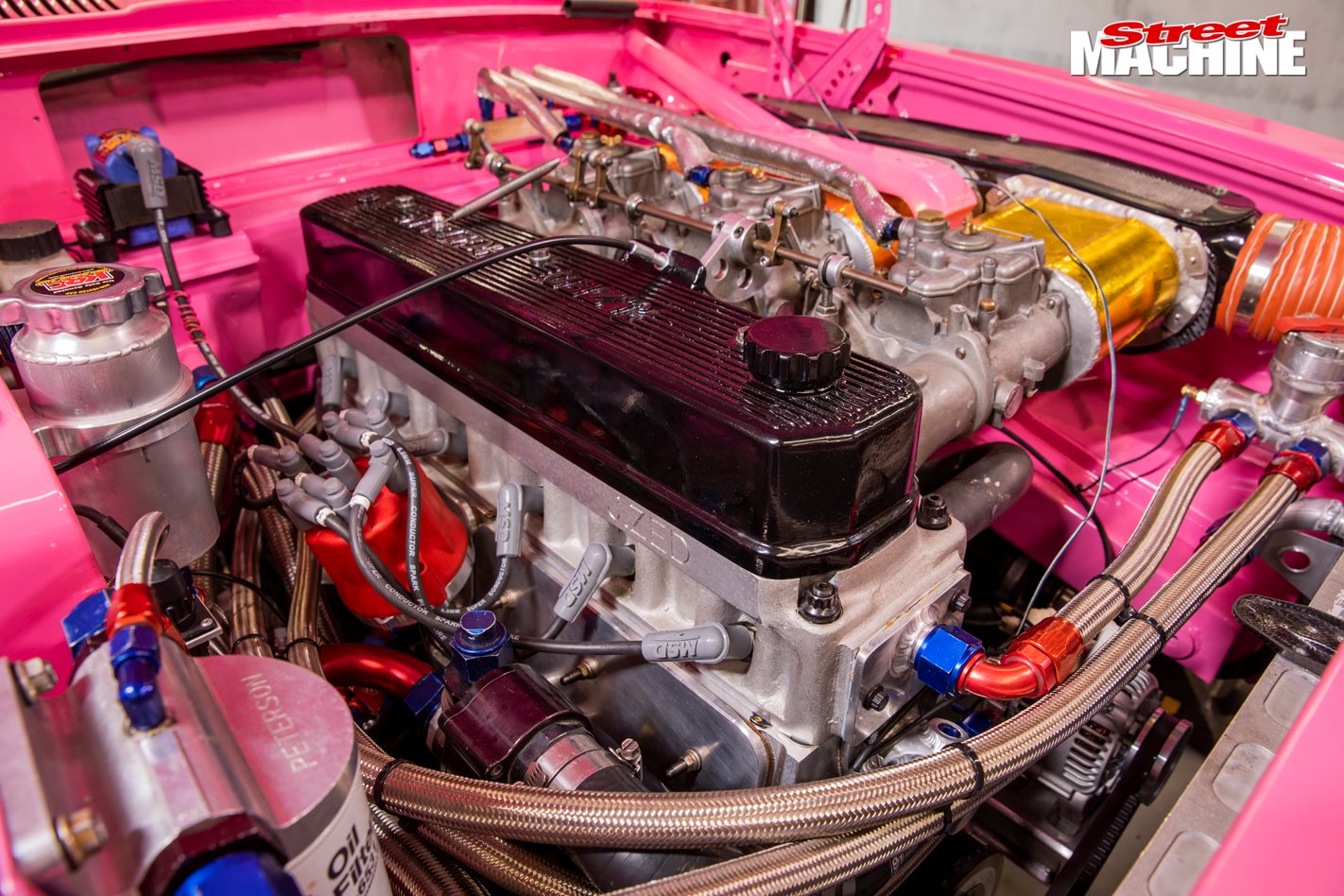 There’s a fair bit going on with the plumbing, with separate lines for the head and block. The whole lot is kept cool by a NASCAR-style radiator from PWR. 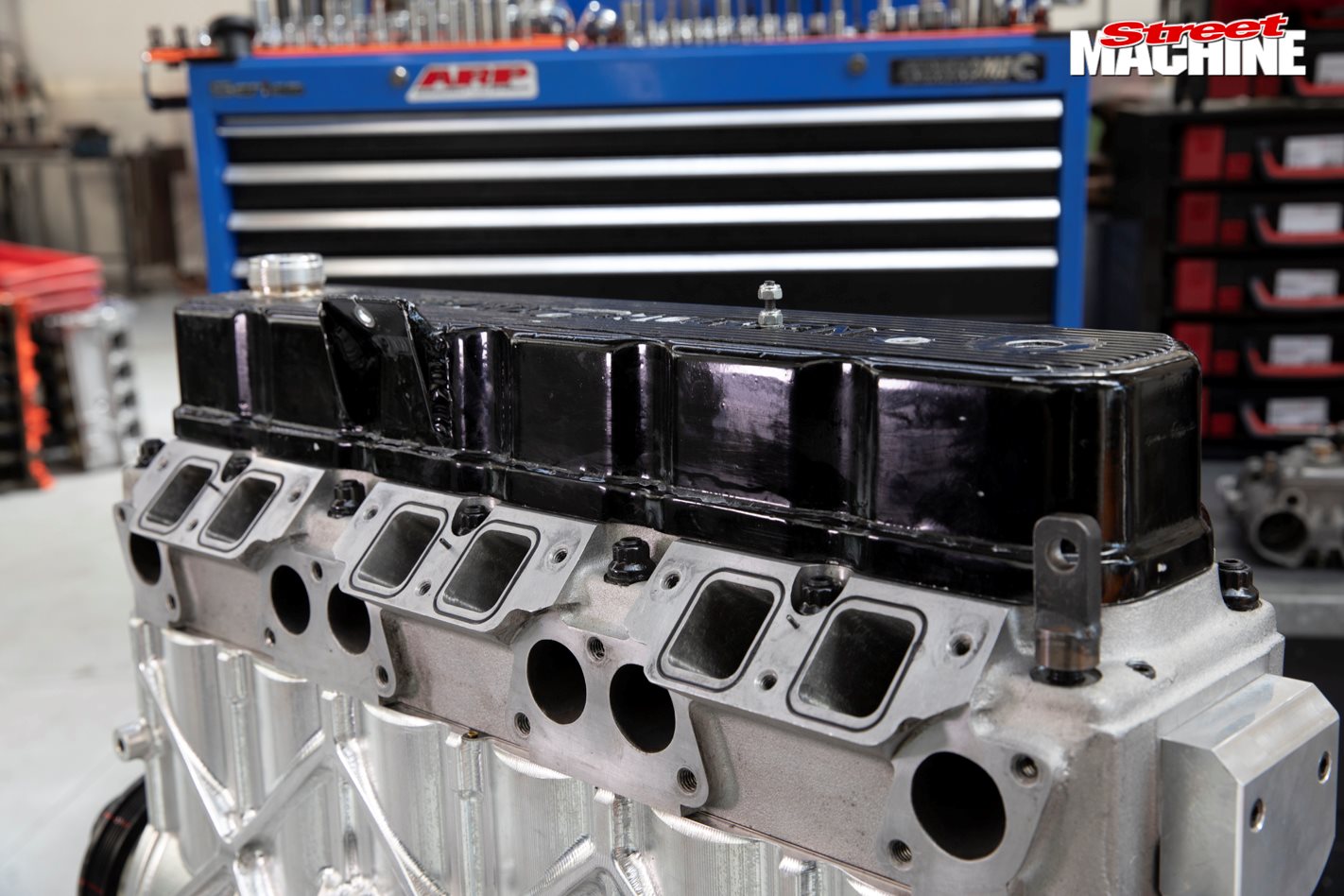 The J.ZED head is a big part of how this motor makes so much power. It’s had some extra fettling from standard. 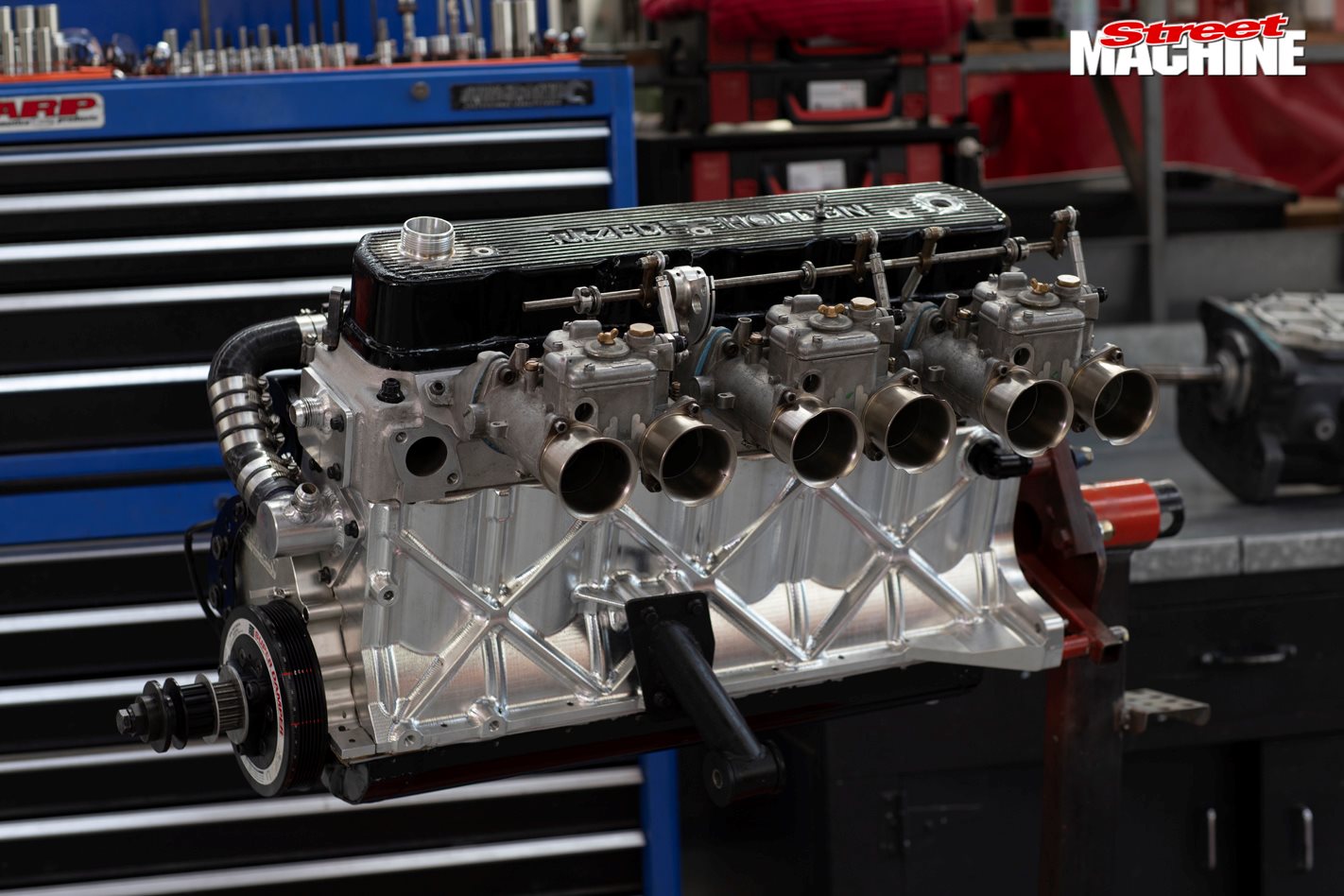 Aside from the awesome triple 55mm Webers, the other cool things in this shot are the strengthening ribs on the block. Form definitely follows function here. 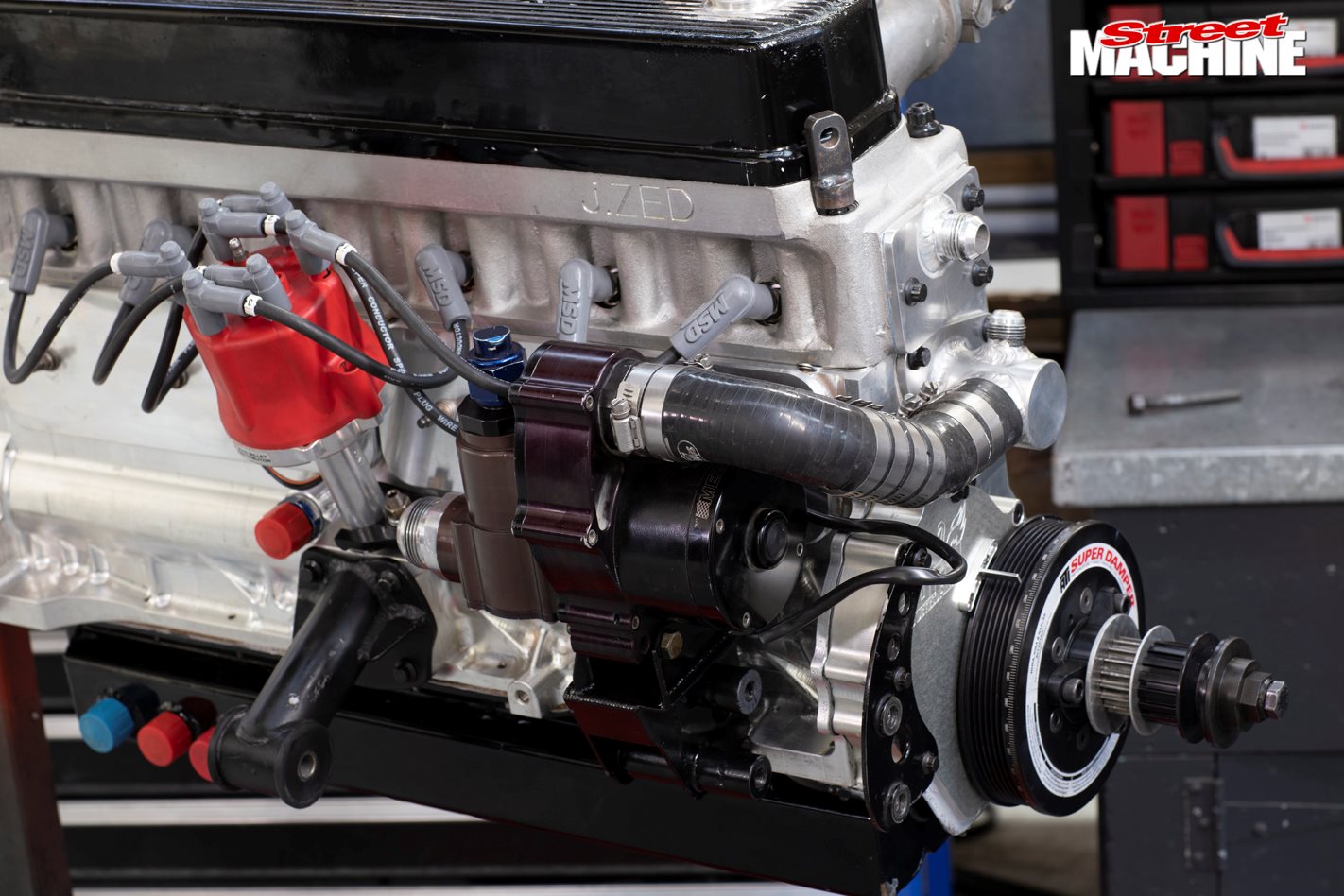 The electric water pump is a key part of the cooling system, according to Paul. There’s not much room between the sleeves, and Paul doubts a mechanical pump would have the oomph to push the water around. 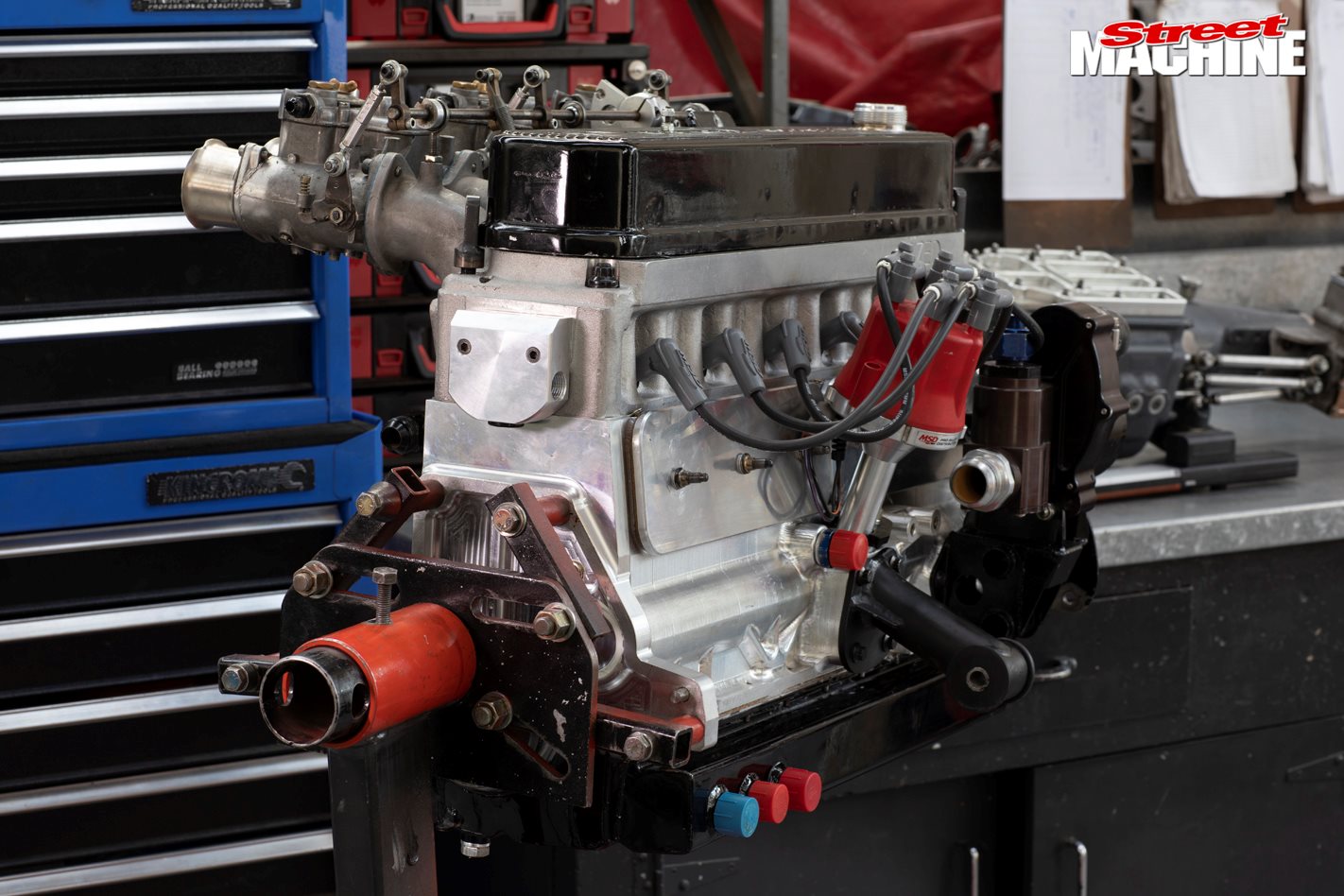 In this shot you can see the block for the coolant fittings at the back of the head, which required modifications to the firewall to make fit. 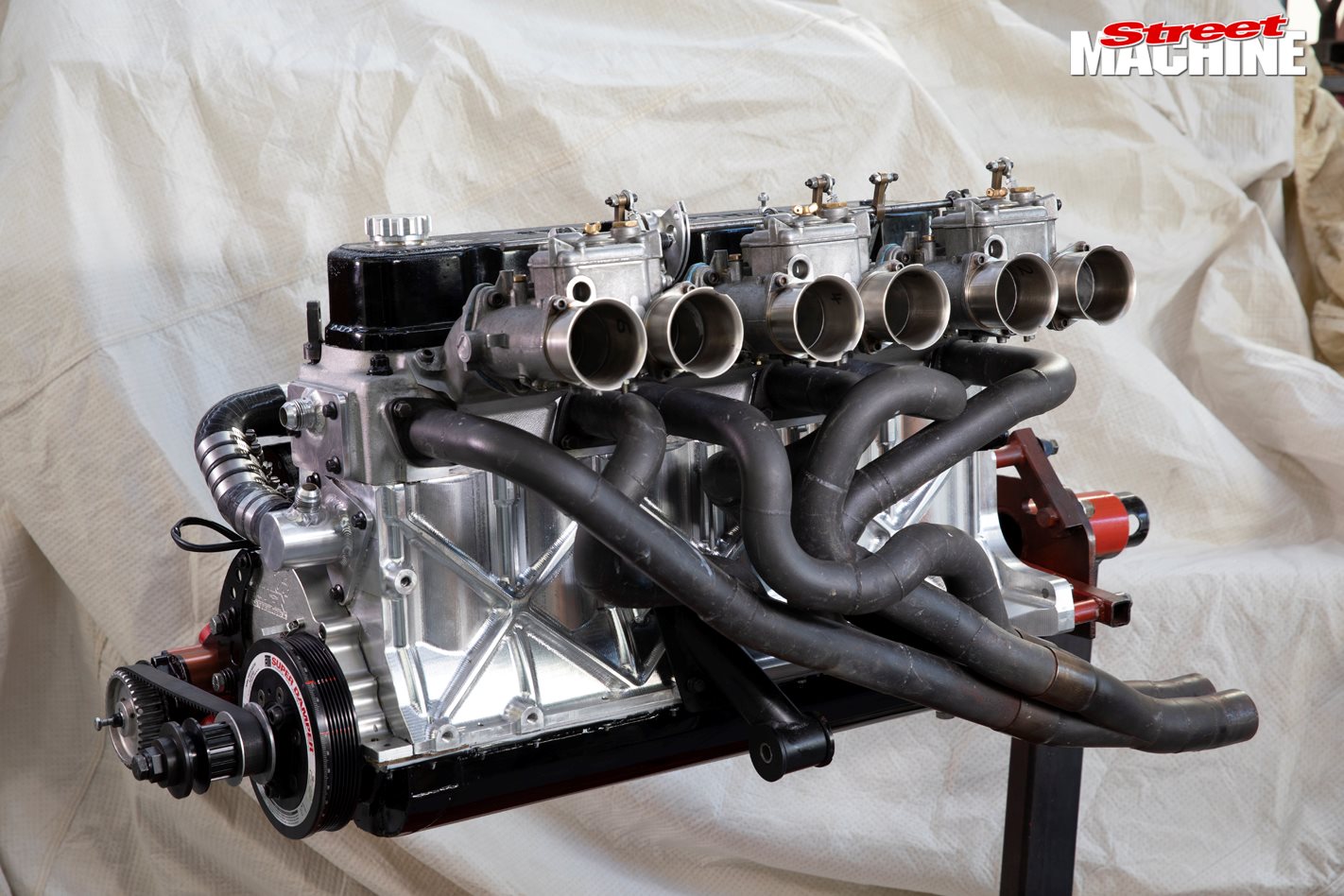 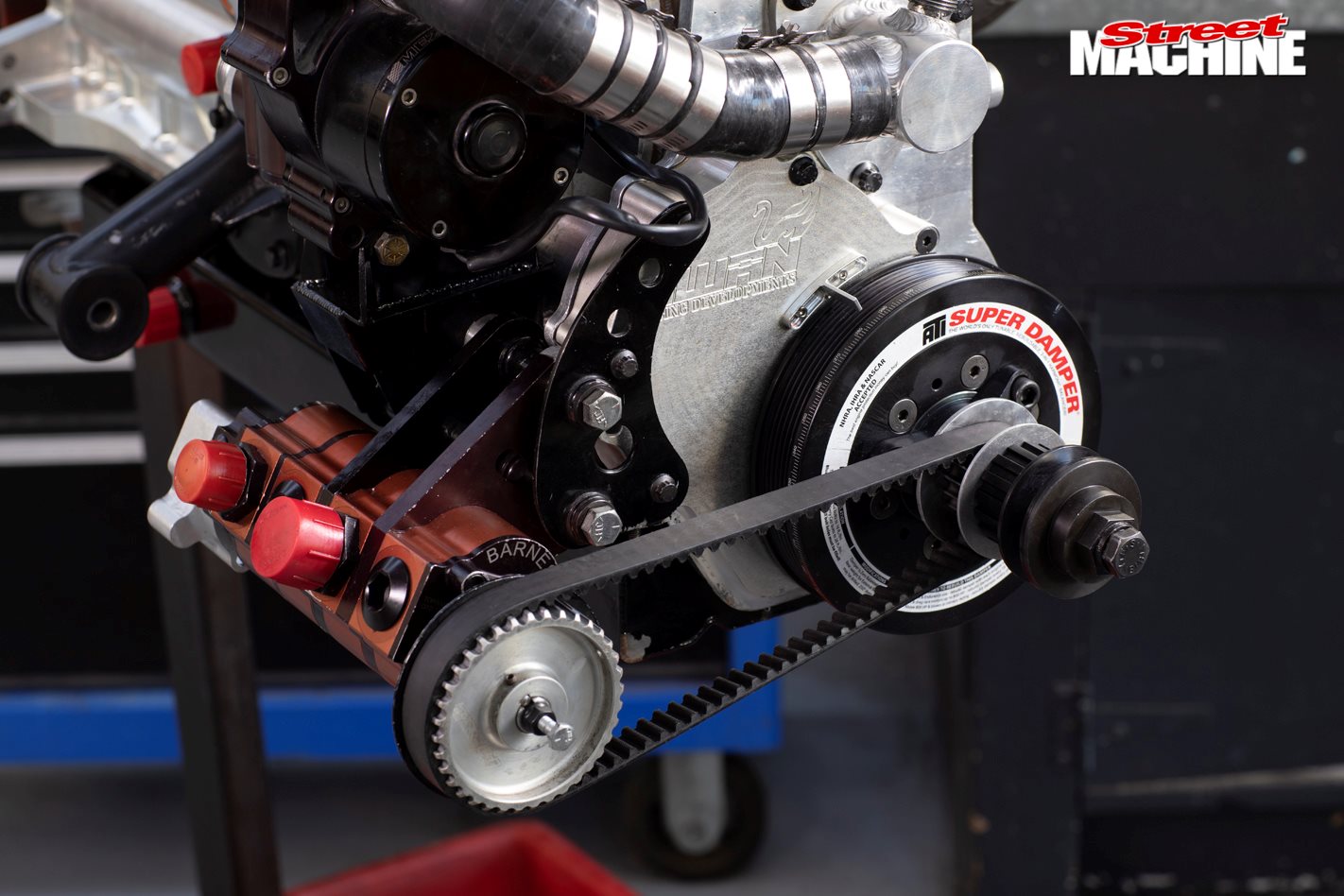 Phil Pagan at Track Sport Engines, who built and maintains the car and the various engines it’s had, and designed the billet block; Michael Bristow, who works for Phil and is an excellent test driver; Alex Lean of Devise for all the CAD/CAM work on the billet block; Craig Hyland at Engine Dynamics for the CNC machining of the billet block; Luke Dinsdale at Dinsdale Race Engineering for designing the suspension