ALTHOUGH he didn’t inherit it from his folks, Greg Hogan is a natural-born car guy. “My parents gave me a VW Beetle to keep me slow!” he laughs when recalling his very first ride. “By the time I sold it, it had a 2180cc stroker and was good for a 13-second quarter!” Not bad for an old ‘Whoppi’, but the Bug was clearly not Greg’s steed of choice. He went on to own and love a succession of track-focused road/race cars before turning his attention to a 1969 Camaro. 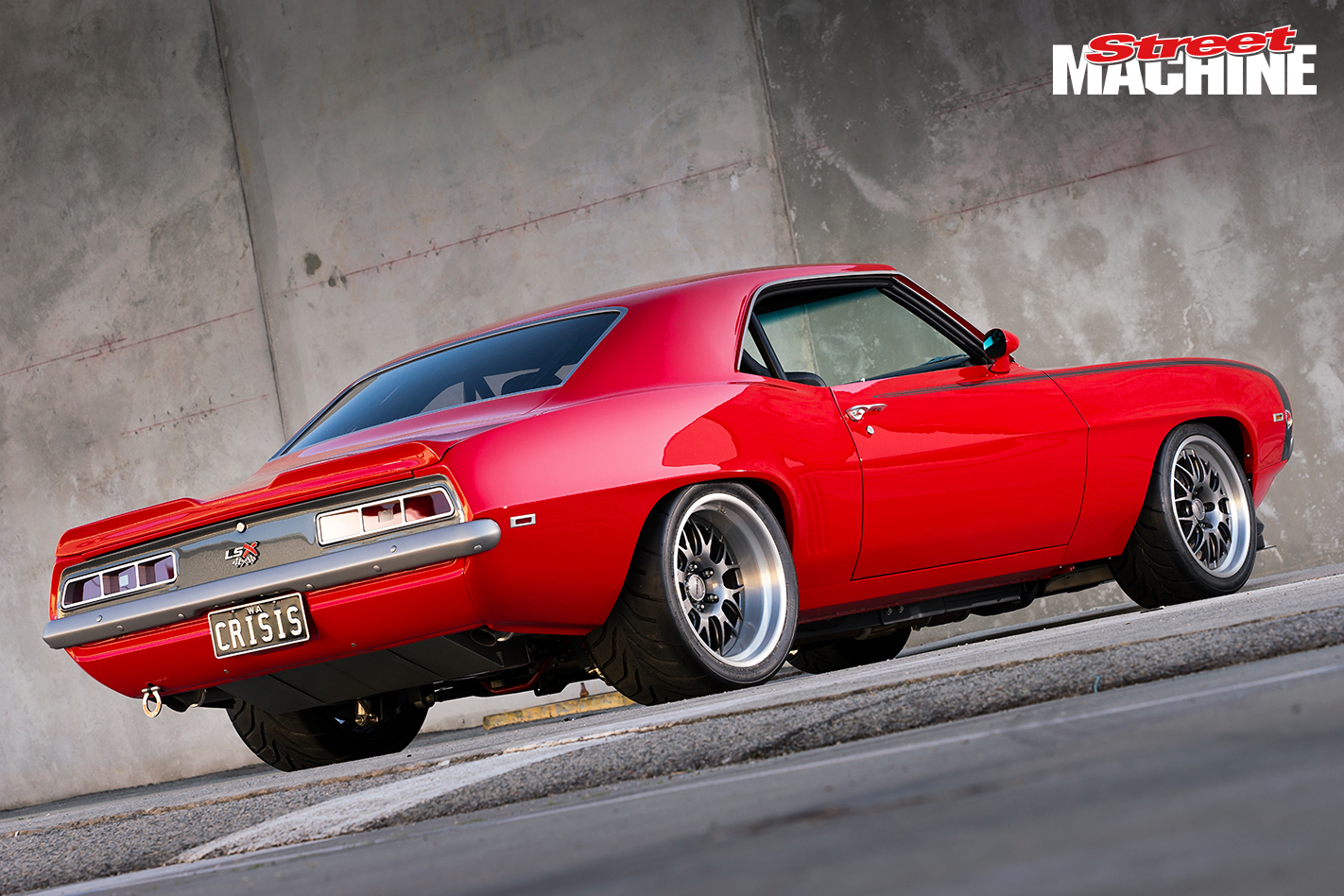 Greg and the Chev found one another at the perfect time in each of their lives. “It’s in the plates: ‘CRISIS’, as in ‘mid-life’,” Greg chuckles. “Back in my early days we’d race the cops at the Dandenong drags; these weren’t off-street, mind you. You can’t do that anymore. I wanted something I could thrash at the track and then turn around and drive home in.” 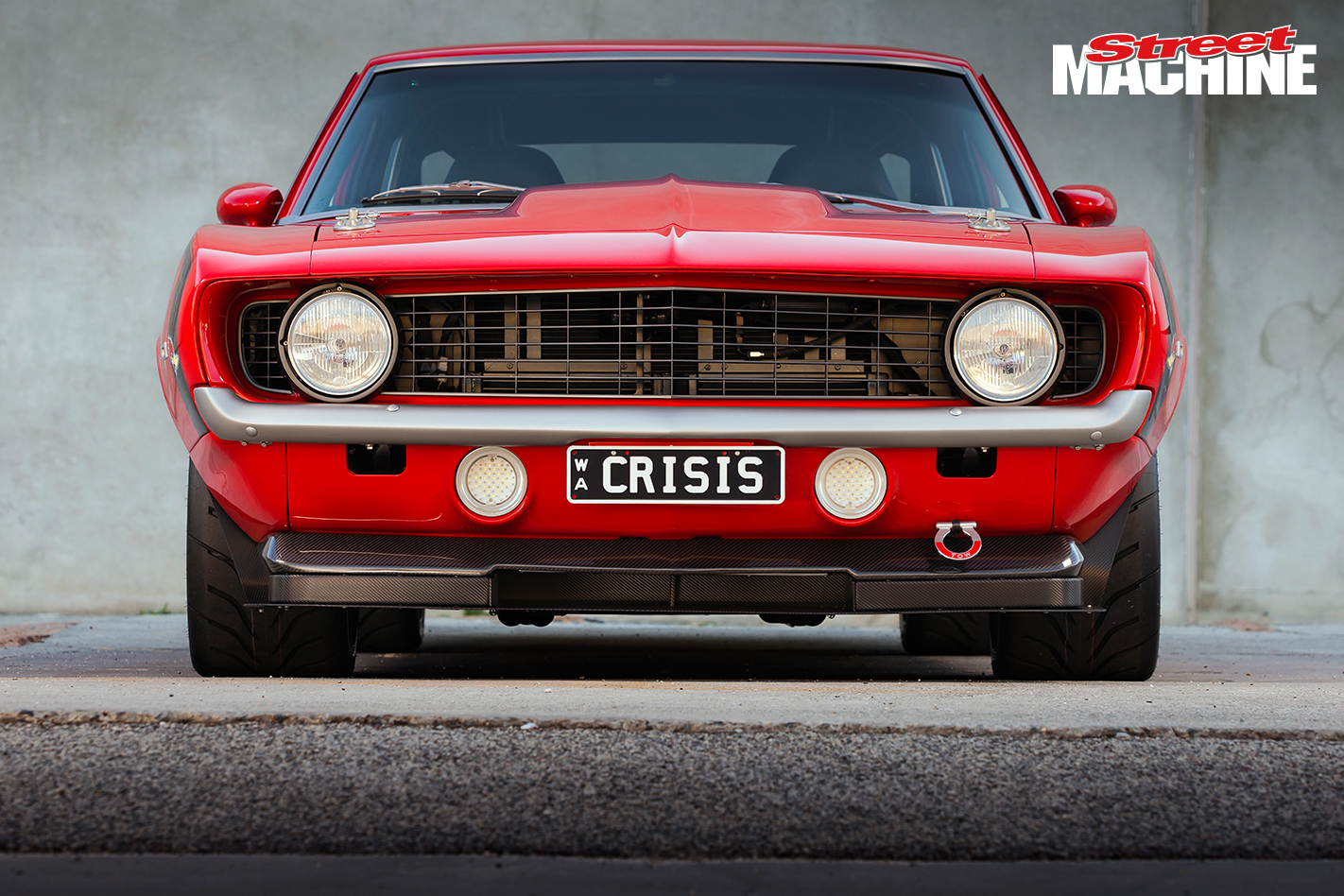 While other gentlemen racers may have chosen to simply hit the local Porsche dealer and tick every box, that’s not Greg’s style. “I love getting in and fabricating; I love the hands-on stuff,” he says. He’s not kidding; barely any part remains of the tired Camaro he rolled into his shed back in 2009. After getting the car on a rotisserie, it was stripped to the bones; Greg even removed the roof, rear quarters and firewall. 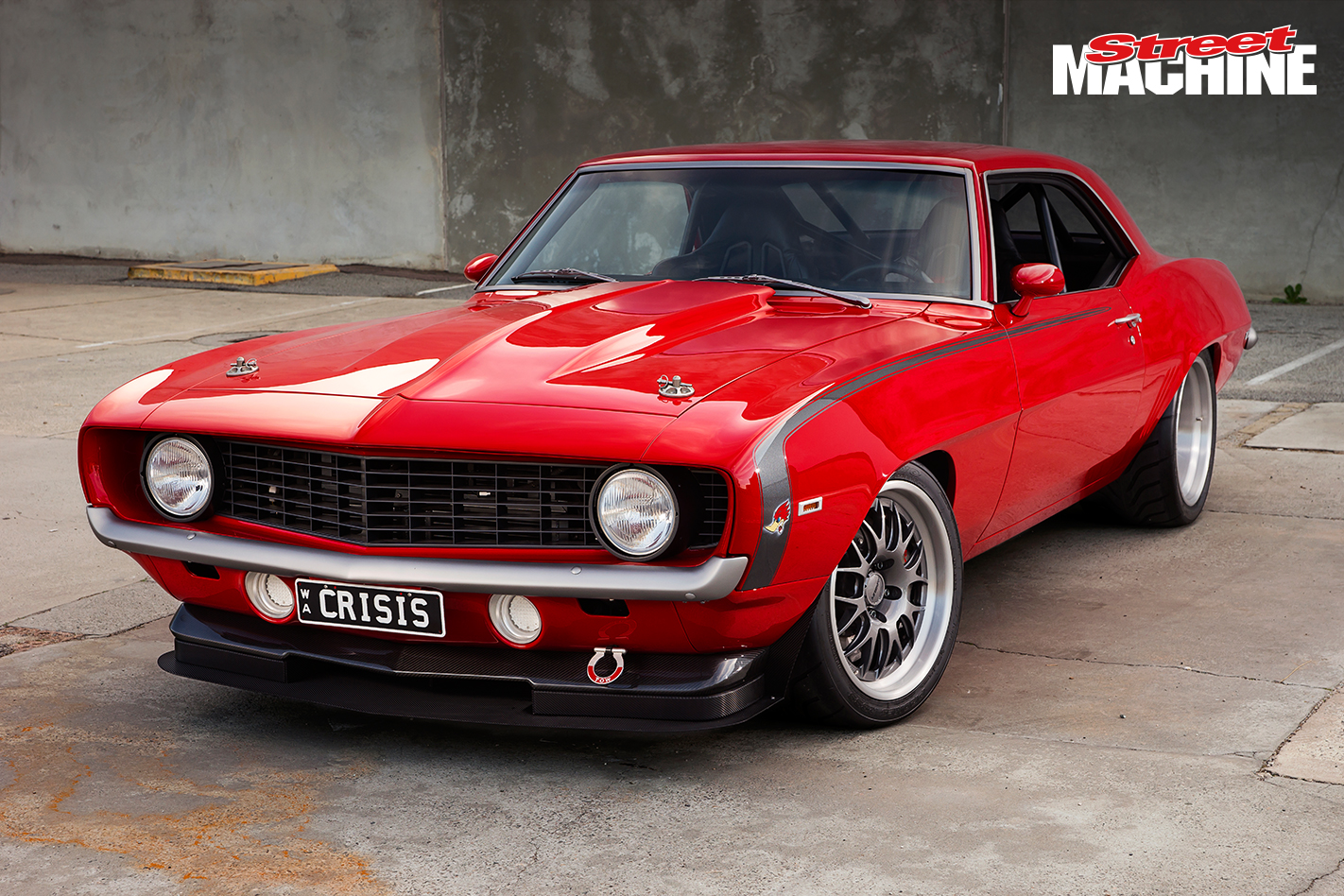 “The inner structure is the only original bit left,” Greg says. “I replaced the floors and firewall myself, but the rest of the bodywork I farmed out to Rowe & Sons in Maddington, who did a brilliant job. I run two businesses and so I just ran out of time.” 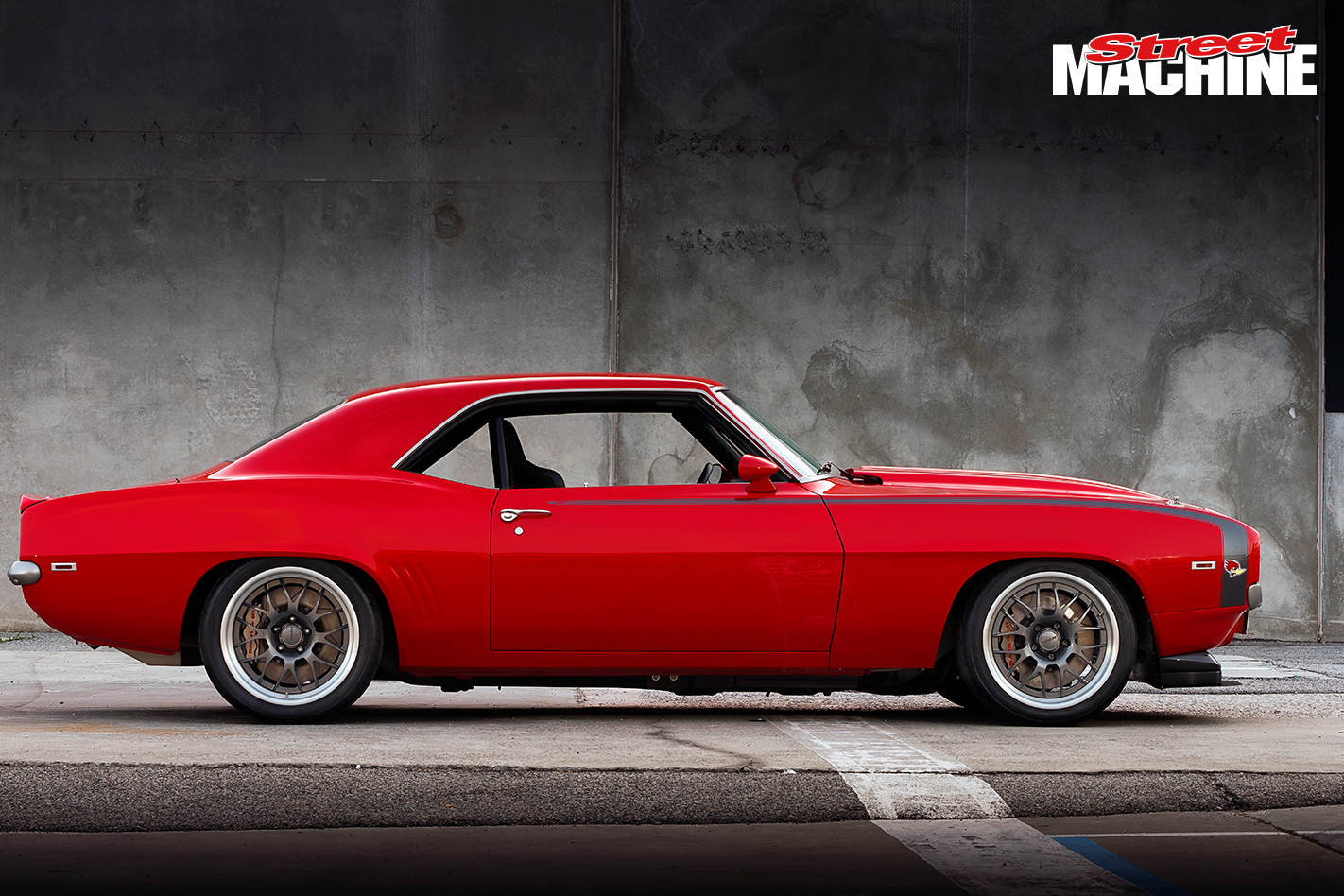 As owner of Stripped Bare Diamond Blasting, which caters to the needs of the West Australian car community, Greg has enjoyed the perk of a regular sojourn to SEMA in Vegas. Each annual pilgrimage has not only served to inspire his build, but yielded a cache of choice parts. 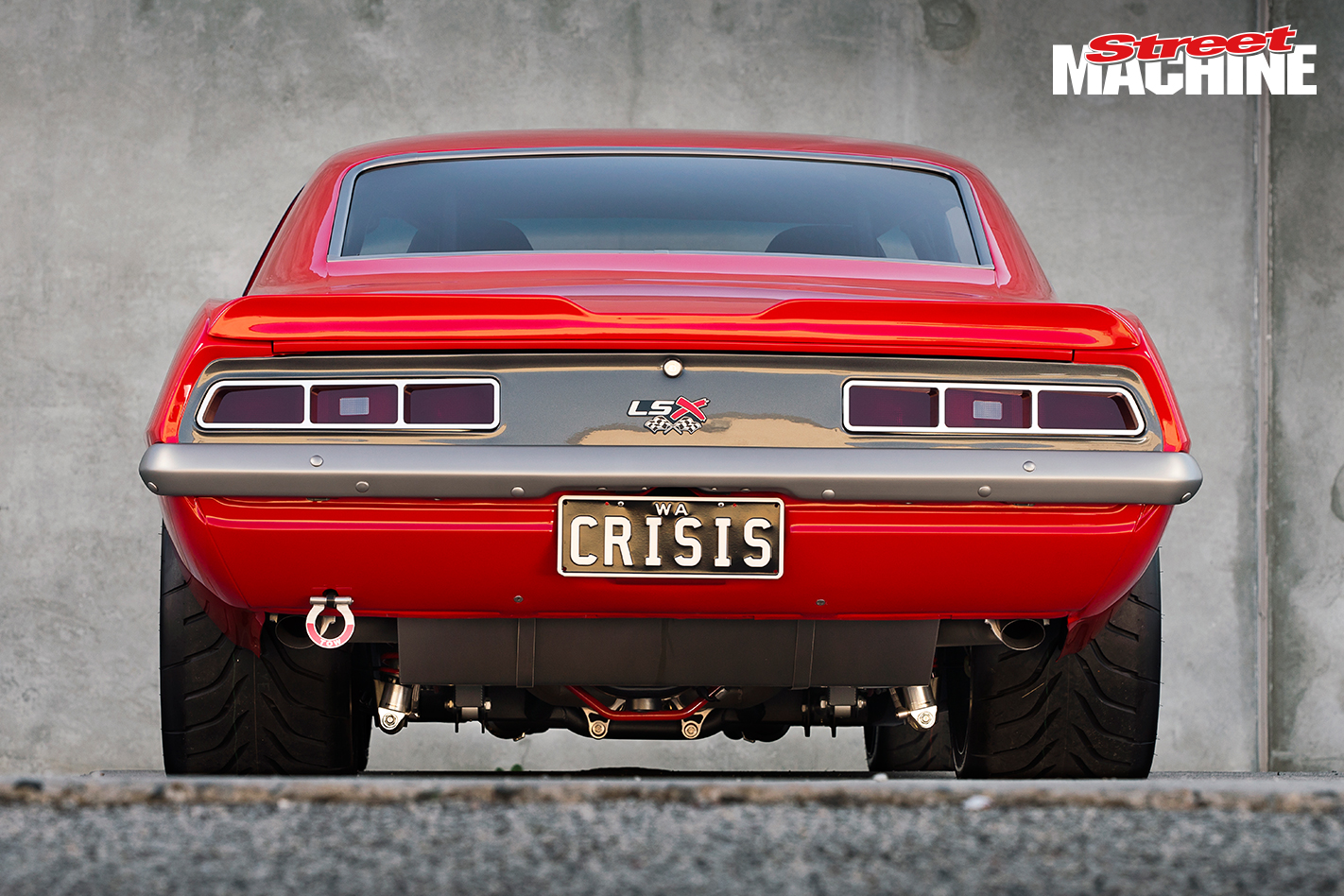 “I’ve always been inspired by the work of Ringbrothers and The Roadster Shop and I’ve met all those guys, so it had to be pro touring all the way,” he explains. And besides, a pro tourer would give him everything he was after – a reliable, streetable racecar that can handle a corner or two. Underneath, Art Morrison provided the front and rear chassis subframes. The front is an off-the-shelf item for application with a dry-sumped LS7, while the rear is custom-built to Greg’s specifications. 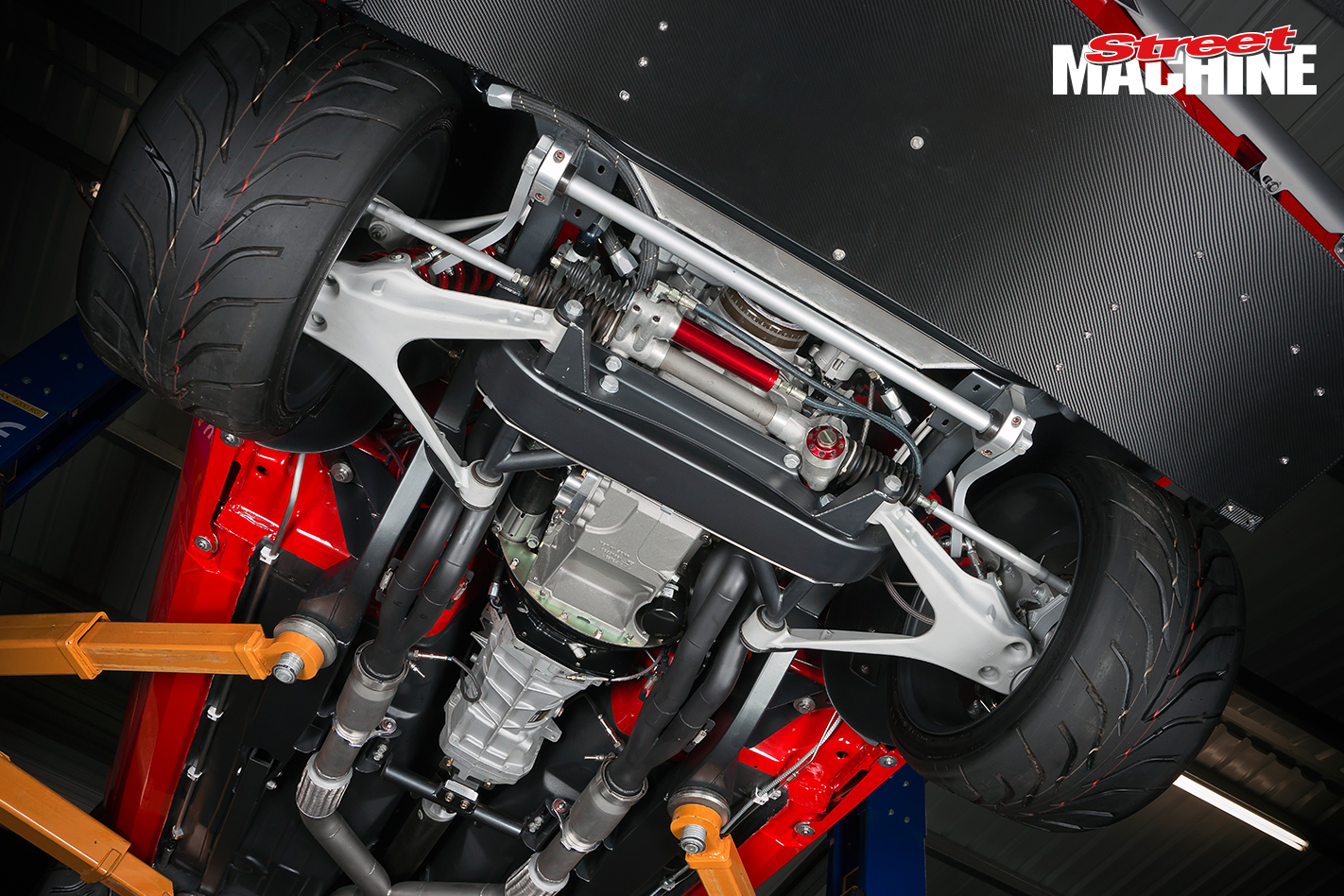 “I wanted a parallel four-link system for the drags and a three-link system for the corners; it converts to either,” Greg explains. “I call it a five-bar rear end!” Muscle cars aren’t renowned for enjoying the twisty bits, yet such roads are the, er, cornerstone of the pro touring movement. Helping Greg’s Camaro turn in is a full Corvette C6 suspension system and race-spec Woodward power-steering rack. “These 305s up front will chew up and spit out a regular rack,” Greg says. “It cost more, but it won’t break.” Good turn-in isn’t all suspension geometry; weight distribution is aided by aftermarket aluminium front panels. “We wanted it at 50/50 and got pretty close; 49/51 isn’t bad!” Greg says. “Of course, like anything else, nothing fitted right; it was heaps of work to get it this good.” 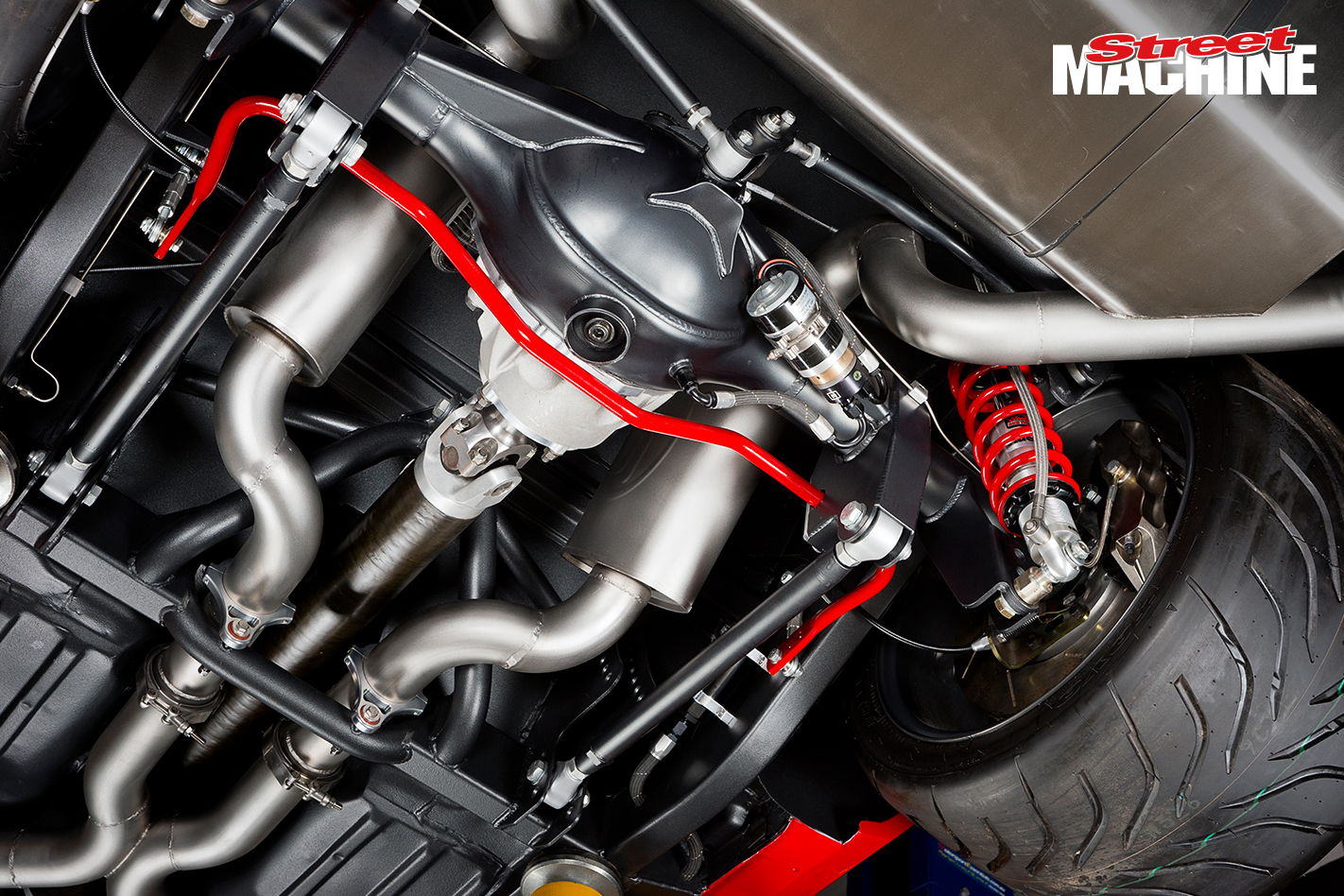 No racecar would be complete without some decent aero. The impressive front splitter was made up by Greg in his garage and is adapted from an aftermarket carbonfibre chin spoiler. There’s more aero at the back, this time of a more traditional style, albeit with modifications. “Camaro spoilers are like Torana spoilers; they look like an afterthought,” Greg opines. “I wanted something that would mould into the body shape.” With that mandate, he reshaped the leading edge, shaved the base and laid it back. Other body areas were treated to a tidy up, too. Bumpers were drawn closer to the bodywork and several billet items were fitted: tail-light surrounds, door handles, driving light surrounds and bonnet hinges, along with some other CNCed items, all supplied by Fesler Built of Arizona. 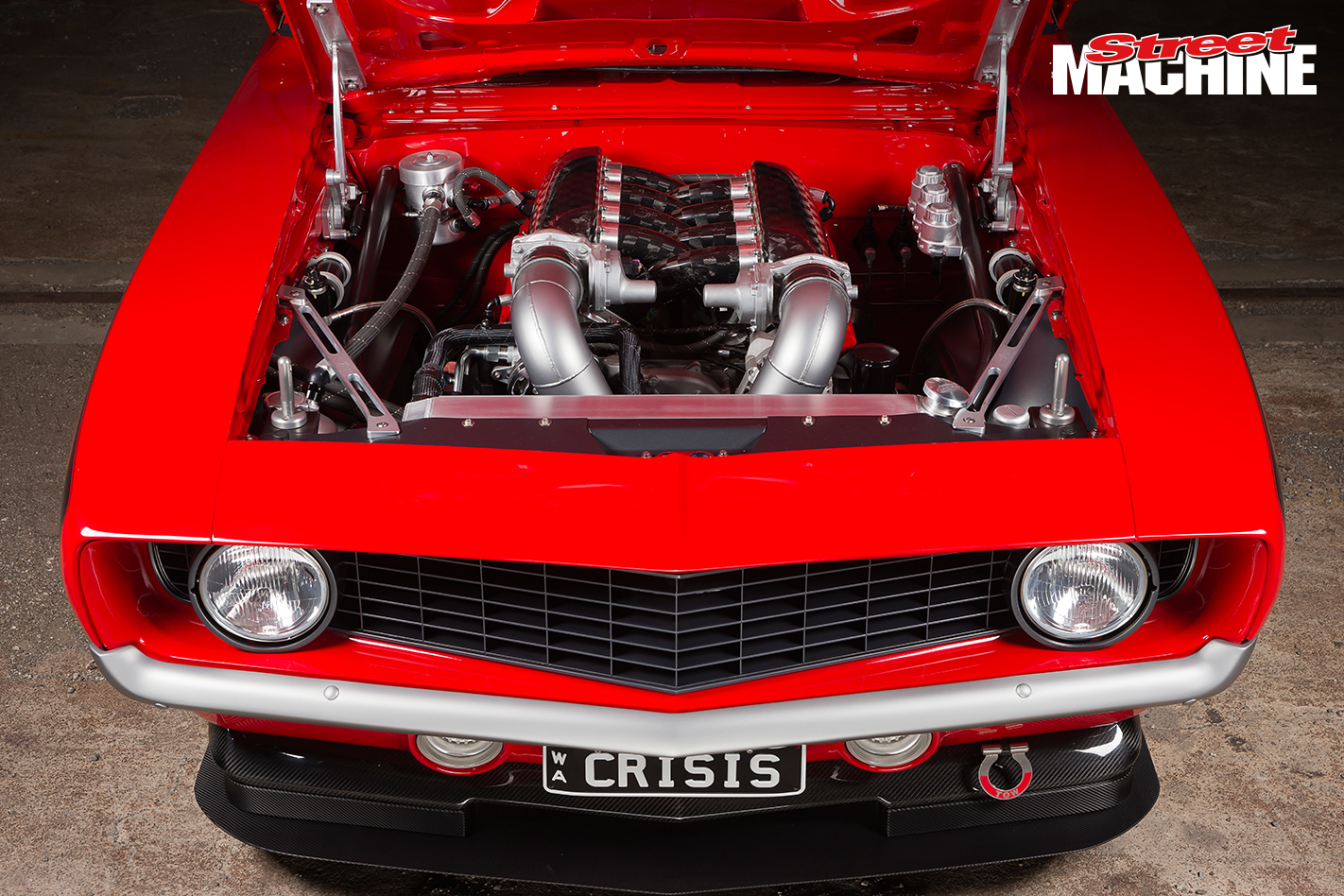 Pro touring is all about tight panel gaps, tough stance, flawless paint and awesome wheels, but it means nothing without epic power. US-based NASCAR engine builder Dave Crume started with an RHS block and decked it out with Wiseco ceramic pistons, Carrillo rods and a Manley Ultra Light crank. 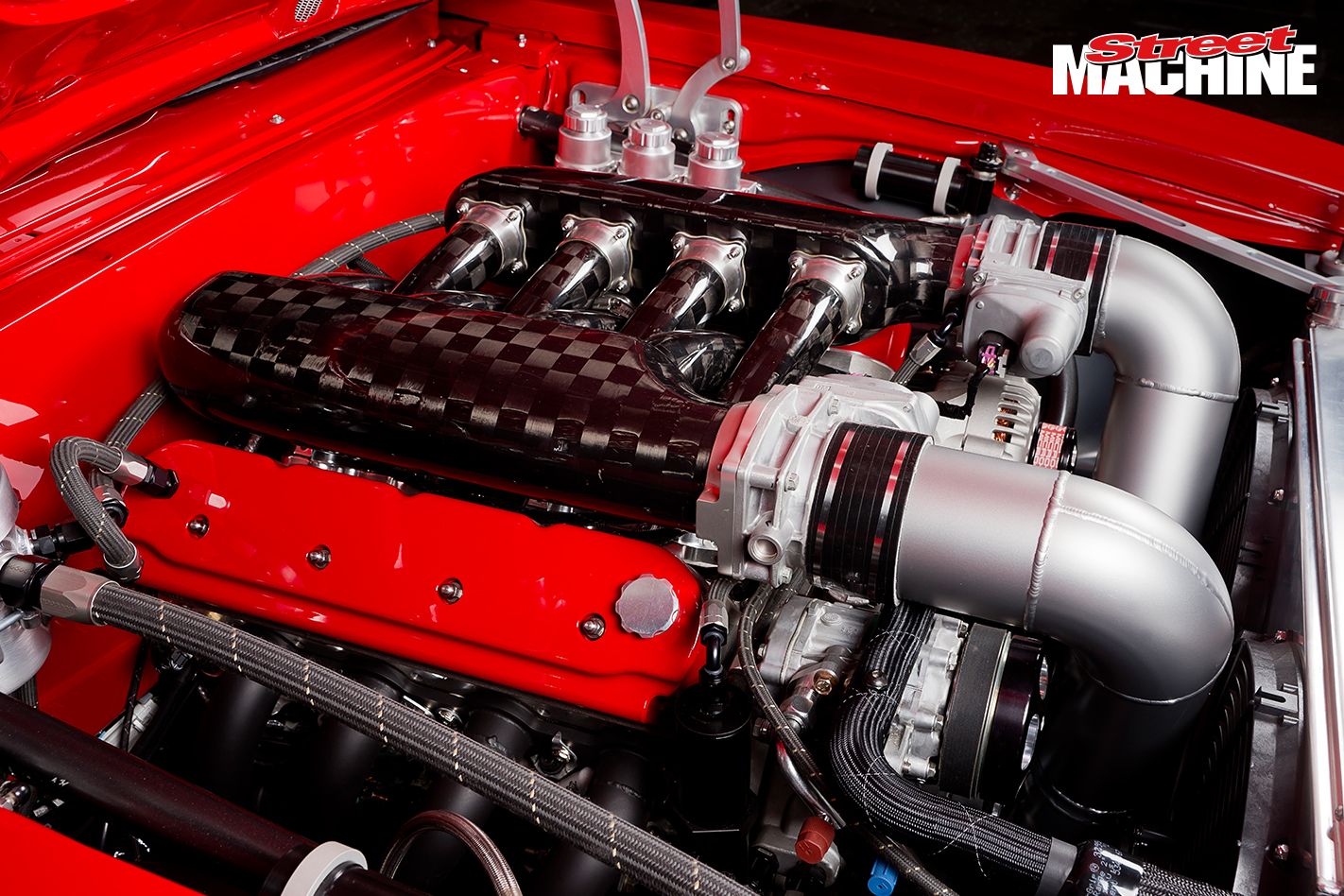 Up top is a pair of Mast Motorsport Black Label heads and a very-hard-to-ignore OZMO Engineering intake manifold. “The carbonfibre weave is proprietary to Red Bull, apparently, so OZMO won’t be making any more of them,” Greg says. “And they’re not getting mine back!” The whole combo made 780hp on Dave’s bench. “It’s not a street engine,” Greg states. “It’s streetable, but it’s not a street engine!” 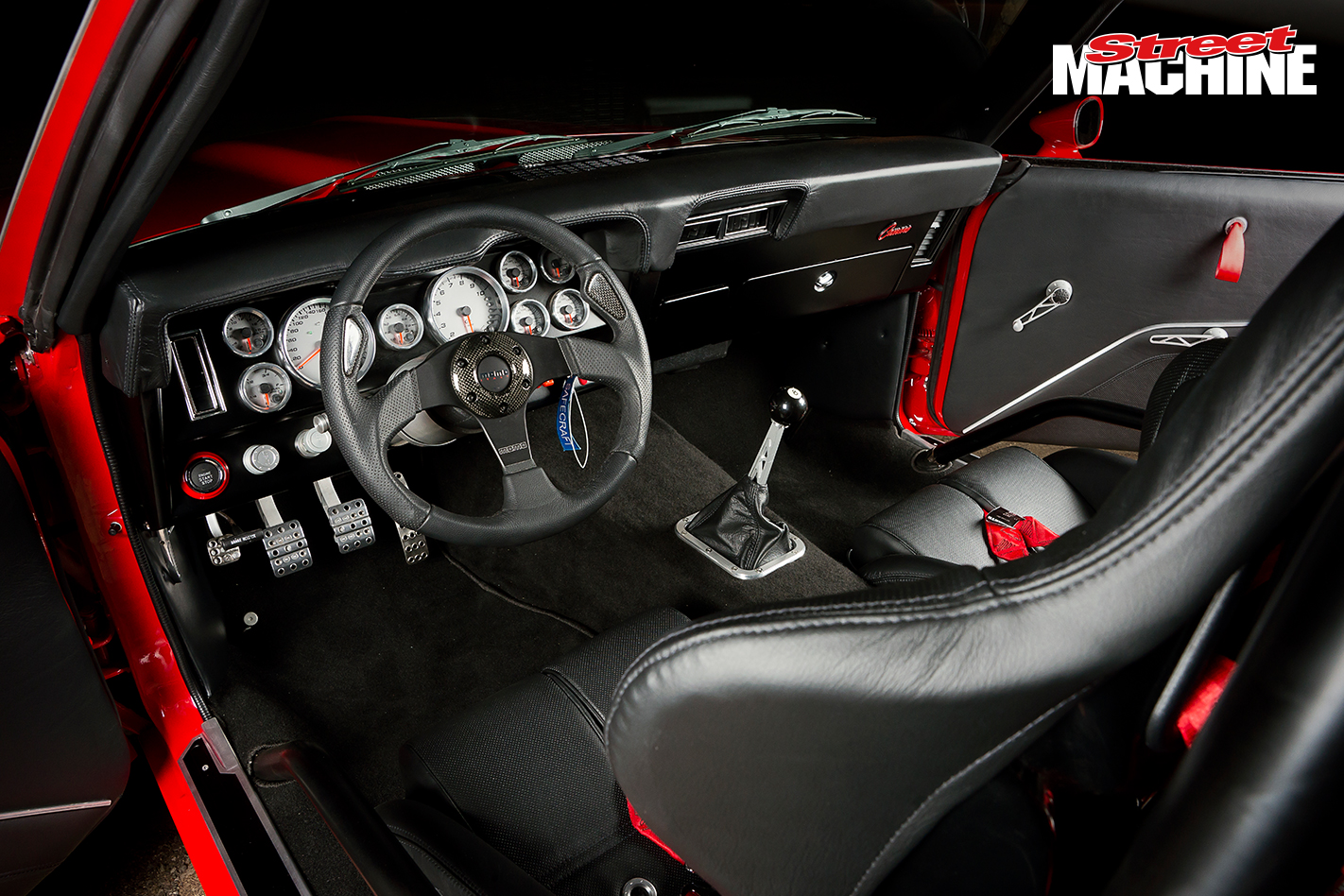 Now installed in the Camaro, some minor tweaks and a bigger cam should see it punch out 800 horses on the dyno. Of course, those ponies will be useless if the gearbox is not up to it. Enter the Tranzilla, built by Rockland Standard Gear. Based on the T56 but with all the gearsets cryogenically treated, Greg says the process “took a $2500 trans out to about $7000”. 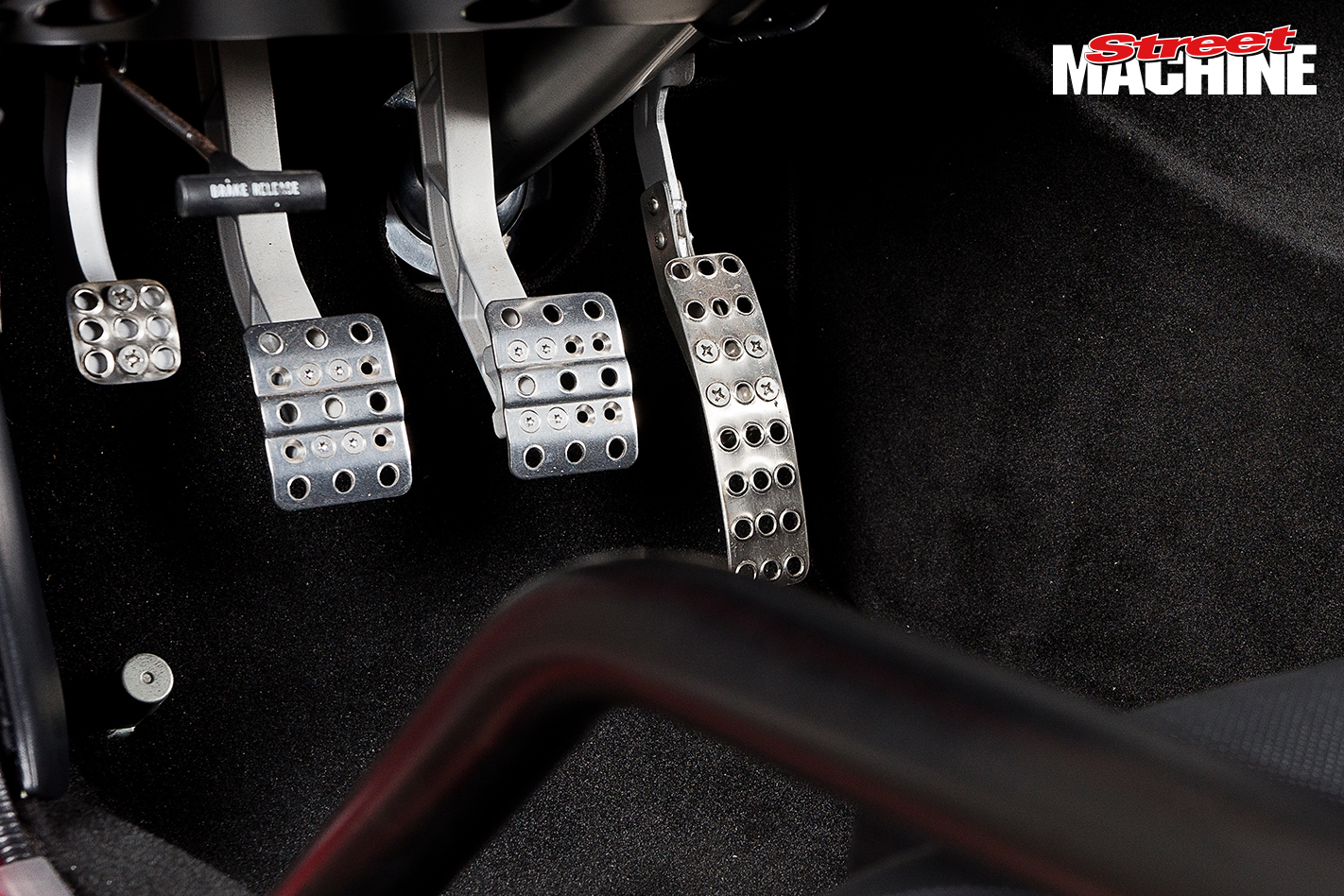 And the ’box is reflective of Greg’s dedication to quality in every aspect of the build. “I said that if we build this, we build it once and we build it right,” he says. “Like the rest of the car, the transmission wasn’t cheap, but it came out perfect. It’s all about minimising carnage!” If only we could all have a midlife crisis like Greg Hogan’s! 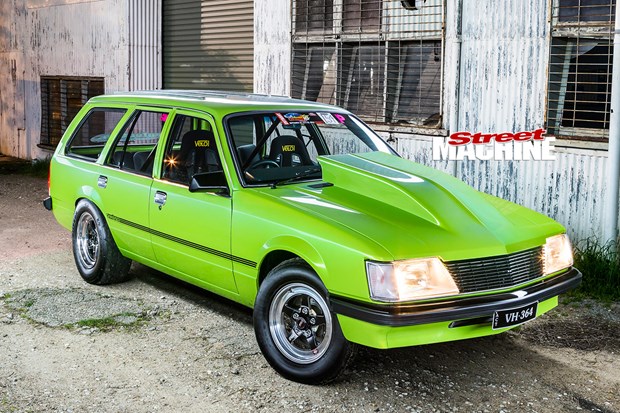 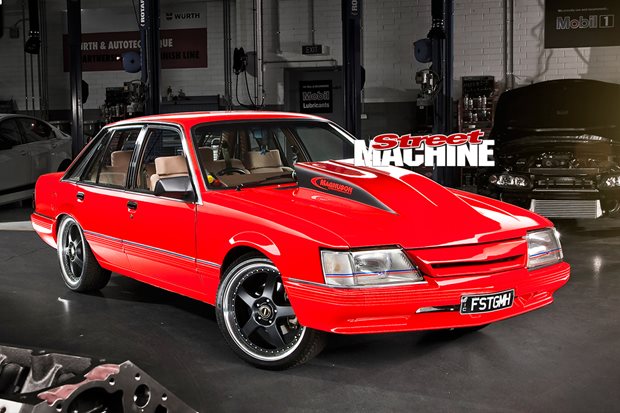 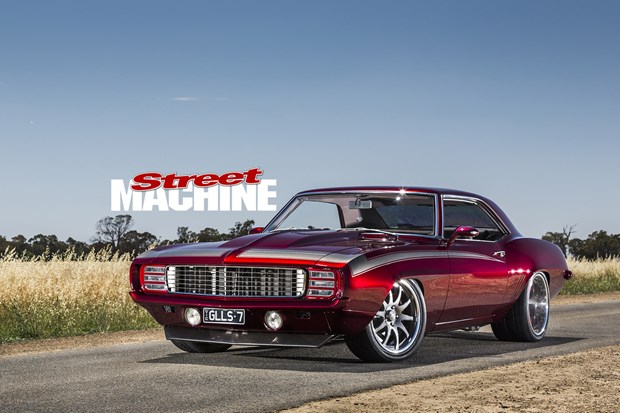 Graham Laity's stunning 1969 Camaro RS pro tourer might be a show car, but it's no trailer queen