ASK anyone who has built a car to elite show standards and they’ll tell you the most important thing is getting the right people involved. Joel Lambert works in the mines at Port Hedland and only returns home to Melbourne every few weeks, so when it came to turning his HG Monaro into a show-quality stunner, he needed someone he could trust and who could make most of the decisions. Fortunately he found that someone in Darren Reid.

This article on Joel Lambert's Holden HG Monaro was originally published in the September 2016 issue of Street Machine magazine. 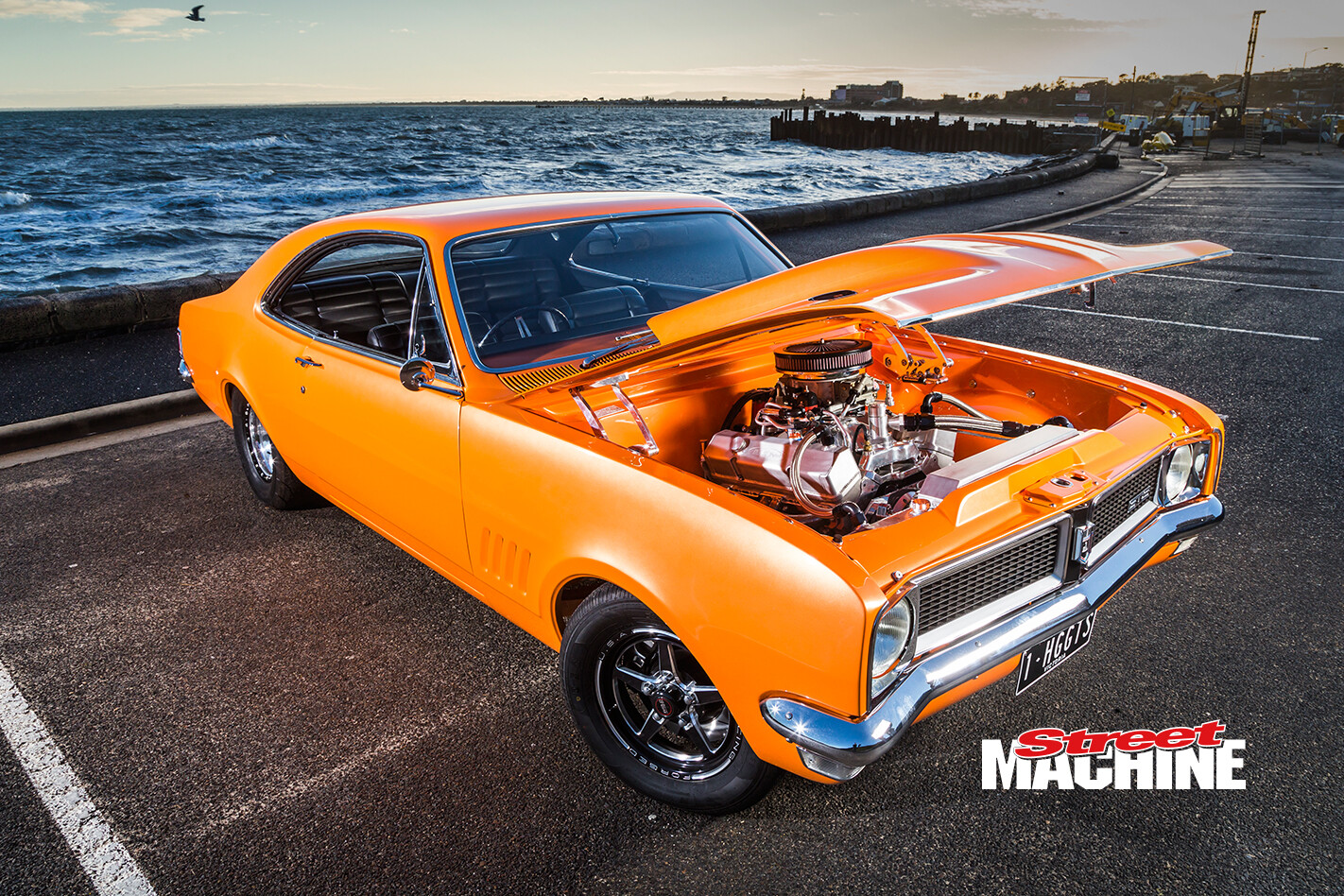 But an elite-level build was far from Joel’s mind initially. A lifelong early Monaro fan, at age 17 he bought this car as a roller from his old boss at the local butcher for $5000. It was a factory white six-cylinder GTS in decent shape, and had been given a lick of Indigo Orange acrylic paint, but had no running gear. 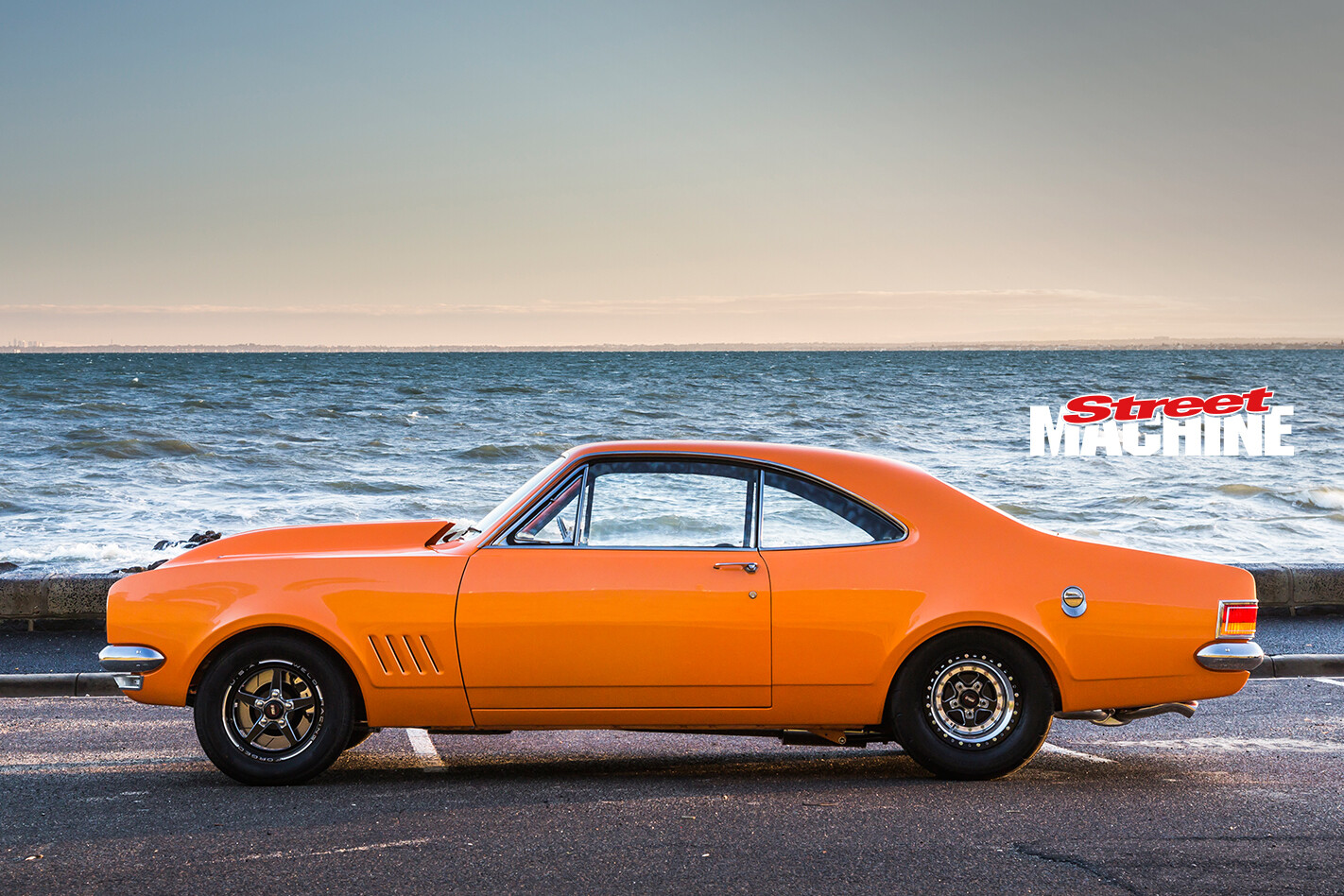 Having emptied out the piggy bank buying the thing, Joel let it sit for a number of years, with the plan to one day return it to its former glory. “My original plan was to just do a tough streeter,” he says. “Repaint it and drop in a 283 and Powerglide combo that I had already built. But once we got into the project we realised the engine bay was full of bog; in some spots it was an inch thick! At the same time we found a heap of bog in the rear quarters, so I quickly realised that it was going to need some serious bodywork. “A few years later, at quite some expense, the car had been through two shops with minimal progress, and that’s when Darren Reid took on the build.” Third time’s a charm! “I basically had some level of involvement in the car from the very beginning,” Darren explains. “I worked at the two first shops that Joel took it to, and I didn’t like the way they did business so I went out on my own and Joel came with me.”

First job for Darren was re-doing the firewall. “I wanted to do something a bit different so I did a flat firewall and filled in all the holes, and when Joel saw how good that looked he told me to do the rest of the engine bay.” Joel then thought it might be cool to tidy up the rear end. The undercarriage was smoothed and the standard fuel cell and spare-wheel holder were cut out. A custom tank was then fabricated to loop over the larger nine-inch diff that was planned for the car. Darren also mini-tubbed it to the rails, so Joel could squeeze a bit more rubber under the rear, as he planned to do some drag racing. At this point Joel realised that his Monaro was going to be more than the tough streeter he originally envisioned – it was most definitely heading in the elite direction. “Basically because I was working away and I couldn’t come and check on the car on a regular basis, I gave Darren a lot of free reign,” Joel explains. “He would send me pictures of what he was doing and I told him whether I liked it or not.” More work went into the engine bay, hiding the brake booster and master cylinder under the dash, and covering up a lot of the messy wiring and ugly windscreen wiper gear. While all this was happening in Melbourne, Joel was in discussions with Nelson Racing Engines in the United States about a new motor. Obviously the old 283 was no longer going to cut it given the direction the build was moving in. “I saw all the crazy 2500hp builds that they had done and heard great things, so rather than source a motor locally I went with them,” Joel says. “I basically just said I wanted a big-horsepower small-block Chev and they handled it all. I’m really happy with how it worked out; I even got to see it on the engine dyno through a video they posted online.” The outcome was a 441-cube small-block with aluminium 235cc CNC-ported AFR heads, JE forged pistons, billet rods, Callies Magnum crank, Comp Cams roller and a Dart single-plane intake manifold. It’s topped off by a custom-made Carb Shop 1050 Dominator and a plate nitrous system. It’s all high-end stuff, and it does the numbers – we’re talking almost 900hp on the bottle. Aspirated it pumps out 640hp and 610ft-lb, and for a pretty serious small-block it idles smooth and drives easy.

“Because they don’t use much 98-octane fuel over in America they were pretty cautious with the tune, setting the compression at 10.5:1 initially because they didn’t trust the fuel,” Joel says. “I told them the fuel over here is fine so they upped it to 11:1, and it’s perfect.” And because Joel now had his sights set high, Nelson Race Engines dressed up the small-block from sump to rockers with all their nice CNC-machined parts. Darren did the stunning custom stainless extractors and exhaust system, plus the engine plate that holds it all in place, which is a work of art in itself. He also fabricated a plate that holds the throttle and fuel lines and the nitrous system. He put a lot of thought into the small details, relocating the radiator cap onto the engine near the manifold and putting the fuel and nitrous lines through metal tubes rather than the usual rubber hoses.

“A lot of the time I’d start working on something and then realise it didn’t quite look right or it didn’t match the quality of the rest of the build, so I’d go down a different path,” Darren says. “I’d spend days just designing the little detail parts, but I think those are the things that take it to the next level.” 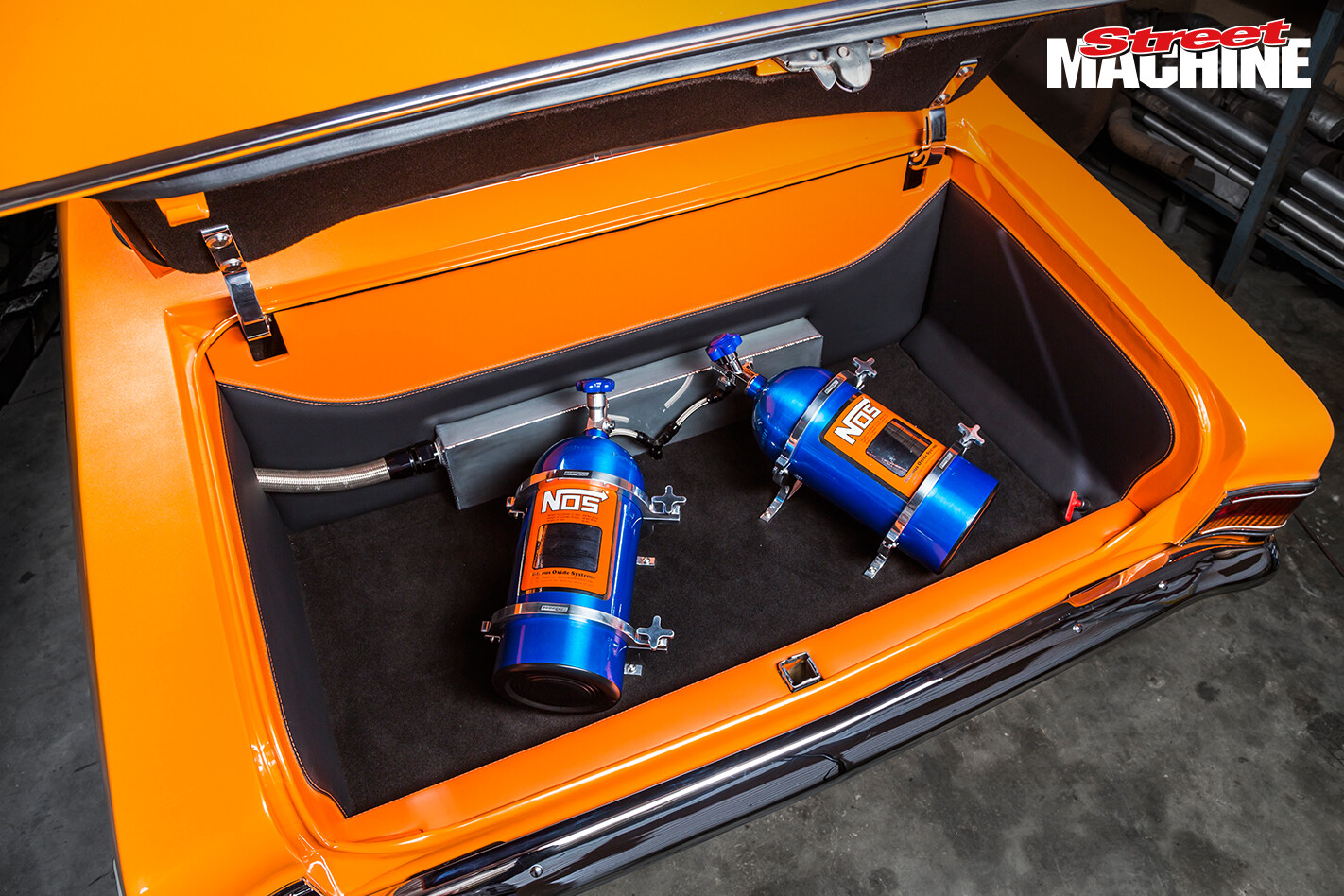 Hooked up to the motor is a TCI-built TH400 transmission with a 3500rpm converter and transbrake. There was talk of using a Powerglide early on, as it would get the engine sitting flatter and lower and they could get away with not running a scoop, but since Joel plans on getting a fair bit of street use out of the car they went with the three-speed. From there a custom three-inch tailshaft runs to a nine-inch with a Competition Engineering fabricated housing, Strange nodular case with Detroit Locker and 4.11 gears.

For stopping power they went with HSV discs and calipers all ’round. Of course, HSV brakes don’t fit behind 15-inch wheels; it took some fancy engineering to get them to fit the Weld AlumaStars Joel had picked. And to get her sitting just right, Pedders lowering springs were fitted to the front end with Koni shocks, while the rear sits on reset leaves with adjustable shocks that Joel plans on mucking around with when the car hits the track. The rack-and-pinion steering came out of a Torana. Once the motor landed, more work went into the engine bay as Darren made up custom polished stainless overflow and breather tanks, along with custom laser-cut fan shrouds and radiator housing. Then it was off for paint.

“Because the car was orange when I got it and I liked the way that looked I decided I wanted to keep it that colour,” Joel says. “My painter mate Cameron Milne came to me with Ford Focus ST orange and Lamborghini orange, and I went with the Lambo colour with some added pearl.” The car then went on a rotisserie and Cameron painted it from top to bottom, along with the diff and a few of the custom parts that Darren had fabricated. “I’m stoked with how it turned out; it’s really cool because under normal light you don’t see any of the sparkle and it’s not too out there, but with some light on it, it really pops,” Darren enthuses.

For the interior, Darren thought it would be cool to get some digital Auto Meter dials. But they didn’t suit the old woodgrain dash, so he custom-fabricated a new one to look like the original but with gloss black and matte orange to match the exterior. Darren also made up a centre console to mount the shifter. 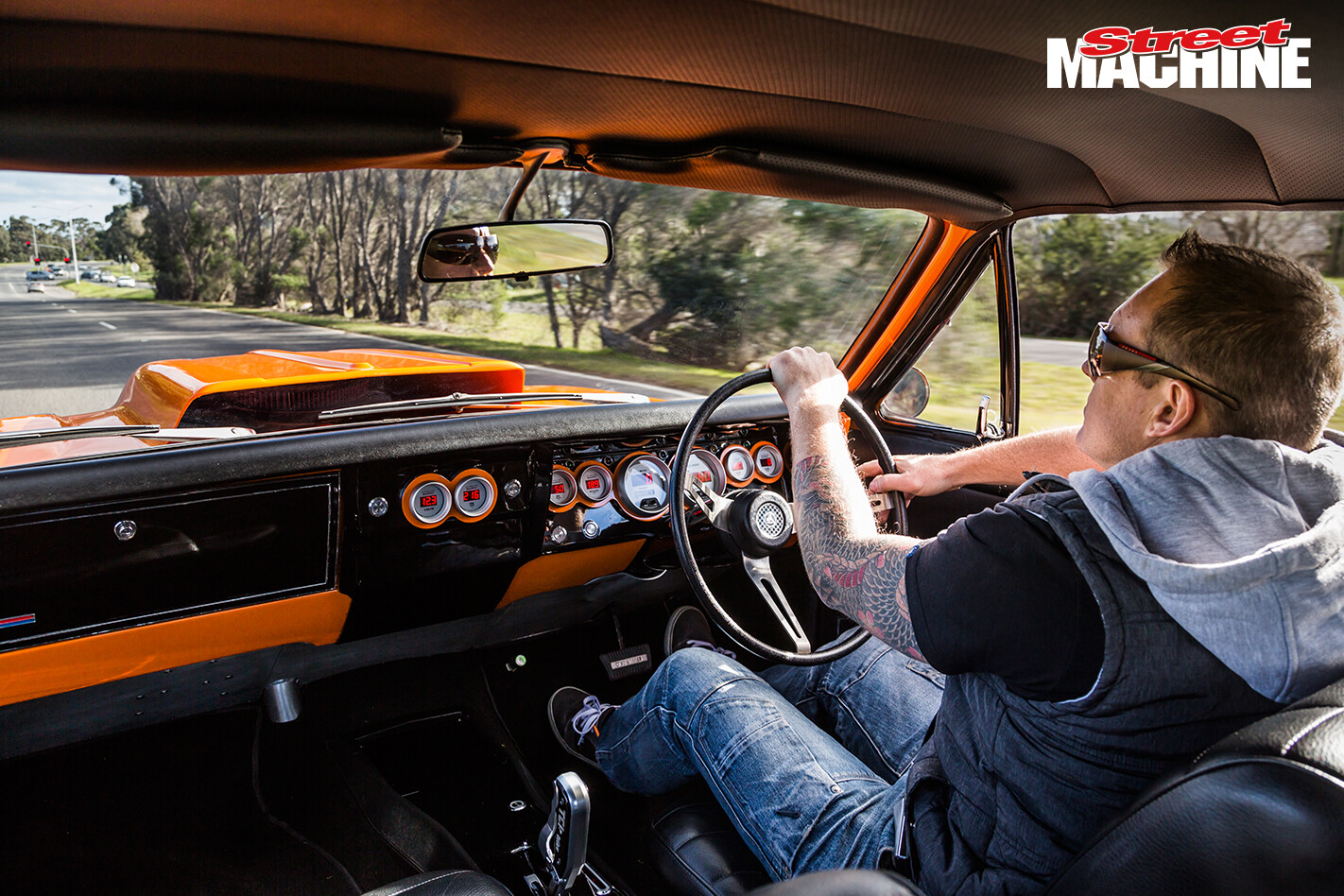 When building an elite car it can be tempting to go crazy on the interior, but from the start Joel was adamant it had to look like a Monaro. With that in mind, the seats are standard HG Monaro items, reupholstered by Seamless Motor Trimming. That’s not say Joel was averse to some subtle modern touches inside. For example, you don’t start this car with a conventional key; Bluewire Automotive supplied an electronic fob with a push-button start – just like a modern car – and there are also buttons for the electro-hydraulic handbrake and to arm the nitrous.

About three months out from Summernats 29, Joel got the call to say his Monaro would be part of the Elite Hall reveals. But a week out from the show the car still wasn’t finished, so to say it was a mad rush to get it done in time is a gross understatement. “It was finished not even one week from the show, so it was a big relief and unreal to be part of the unveiling,” Joel says. “The reception was great and it was cool to see how well people reacted to it and appreciated all the custom work that Darren put into the car.” The Monaro picked up an Encouragement Award trophy, and a few weeks later collected the Top Two-door Street Machine award at the Victorian Hot Rod Show.

Summernats also marked Joel’s first drive in the car. Even though he’s had it since his teens, because it’s been in pieces the whole time he had never been behind the wheel. “It felt good to drive it for the first time, although we didn’t get very far!” he laughs. 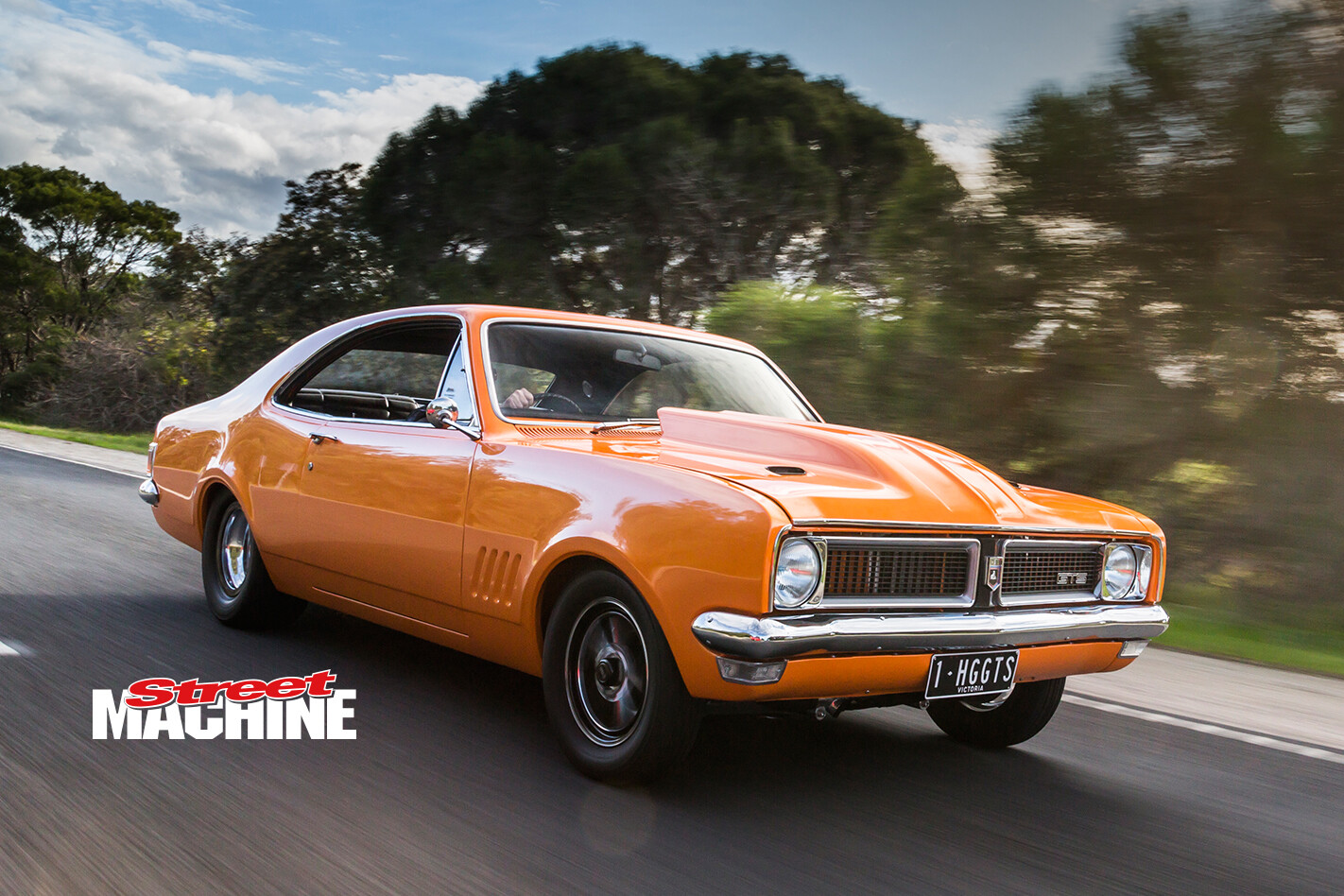 “I took it around the block the other day; that was my first real drive in it. I still haven’t been able to put the pedal down yet, but I’m done showing the car now so I’m going to take it on a few cruises.

“Massive thanks go to Darren and my brother Nathan,” Joel continues. “I left a lot of things up to Darren, and Nathan did a lot of running around collecting parts. We’re still fine-tuning things for the road like the suspension and the tune of the motor, but I just can’t wait to get out and drive it!” 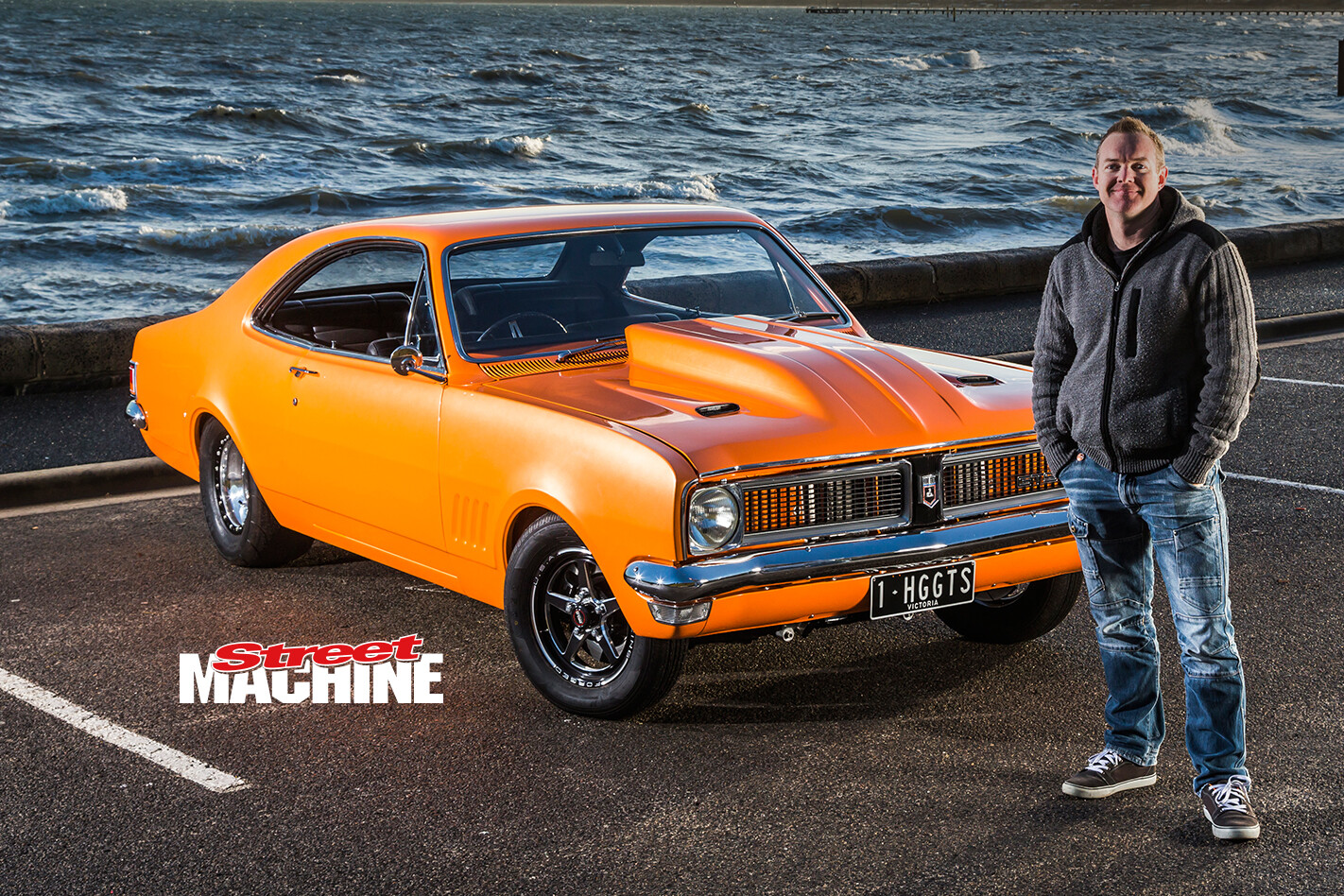 And race it? “Yeah, I’ll get to the track eventually,” Joel says. “I’m dreading having to clean the rubber off the undercarriage! It should do a low 10 aspirated, and nines with the nitrous engaged. It’s got no ’cage though and I don’t want to put one in, so it’ll have to be a hero pass once everything is dialled in.” Sure, plenty of tough streeters might run similar times, but how many of those could also hold their own among the glamour cars of the Elite Hall? Joel Lambert’s HG is one car that can.

THANKS
Darren Reid for all the custom fabrication work and assembly; Cameron Milne for paint plus a lot of bits and pieces; Seamless Motor Trimming for the boot install and fitting up the trim; Ben Mahony for the auto elec work; my brother Nathan for running around picking up parts and organising for the car to be moved while I worked away