As a Mercedes-Benz sales manager, Zane Hau spends his working week surrounded by modern luxury and performance. But when the weekend comes, he loves nothing more than to ditch the suit and tie and burn rubber with the best of ’em. “I love old-school muscle,” he says. “I’d been toying with building a muscle car for a number of years, but it had to be the real deal.” For Zane, the ‘real deal’ meant only one thing: US Mopar. “I owned a pro street VG Valiant hardtop and have always been a fan of big coupes. There aren’t many people here in Australia who have given high-end Chrysler muscle a red-hot go, so that in itself was a reason to aim high.

“I saw the potential in this 1970 Plymouth Satellite after spotting it on eBay and knew with the right guys on board we could build something special. I wanted it heavy in the rear and sinister from the front; a car that is everything I love about tough street machines.”

Zane’s eBay find was a nice-looking stocker imported directly from Michigan, but as is often the case, ‘nice’ in the pics meant ‘rough’ in reality. To sort out the issues, Zane chose the first of his ‘right guys’: Wilky’s Pro Paintz, located close to home on Queensland’s Sunshine Coast. “I’ve known Jason Wilky and his team for 12 years, so they’ve had plenty of warning about my intentions,” he laughs. Huge 20x15 rear hoops, reverse rake and anti-bling finish create a distinctive look that draws on elements of both Pro Street and Pro Touring. The rear-quarter side scoops are a factory pressing unique to the 1970 Plymouth range

Forty-five years’ worth of rust and panel issues were sorted before Jason and his crew hooked into the custom metalwork. A low-slung ride was always paramount, so the floorpans were sectioned and lifted to allow for muffler clearance, while the transmission tunnel and boot floor were raised to handle the six-inch suspension drop.

The original firewall was replaced with smooth metal, and all door handles, locks, mirrors, reflectors and the original wipers were shaved. Shortened and smoothed bumpers were tucked in tight, while additional flat sheet was rolled out for the boot floor and a seven-inch widening of the factory tubs. The functional two-piece custom bonnet bulge continues along the cowl, separating at the panel gap once the bonnet is raised. The use of grey and black paint adds a modern element to the aggressive factory styling, while the low-slung Milodon pan hints at the Plymouth’s performance capabilities

The metalwork was then lavished in a custom-mix PPG Pearl Grey, which highlights the oh-so-smooth engine bay and signature 1970 scooped rear quarters. Check out the super-cool custom bonnet bulge; it follows the original bonnet lines but continues along the cowl, and is finished in subtle black ’70 Road Runner stripes that pay homage to the Plymouth’s muscle-car pedigree. The ‘Mopar’ airbrush graphic on the tail is a neat touch applied by Vicki at CrazyPaint.

2
At 12.9 inches, the disc rotors needed substantial rims to house them, so Zane gave the nod to 20-inch Boyd Coddingtons with ceramic-coated matte-black centres. The fronts measure up at 81/2 inches wide, while the whopping 15-inch-wide rears certainly lend the big Plymouth an air of menace

“Although the car is showy, I never wanted it to be blingy,” Zane says. “Any chrome has been colour-coded or painted satin black, adding a modern edge to the old-school shape.”

The new tub and boot layout was put to good use, with Zane choosing coil-overs, CalTracs and a mono-leaf spring set-up for the rear. The front retains the famous Mopar torsion bar assembly, aided by coil-over shocks, with a Unisteer power rack-and-pinion system replacing the dated recirculating ball and drag-link. 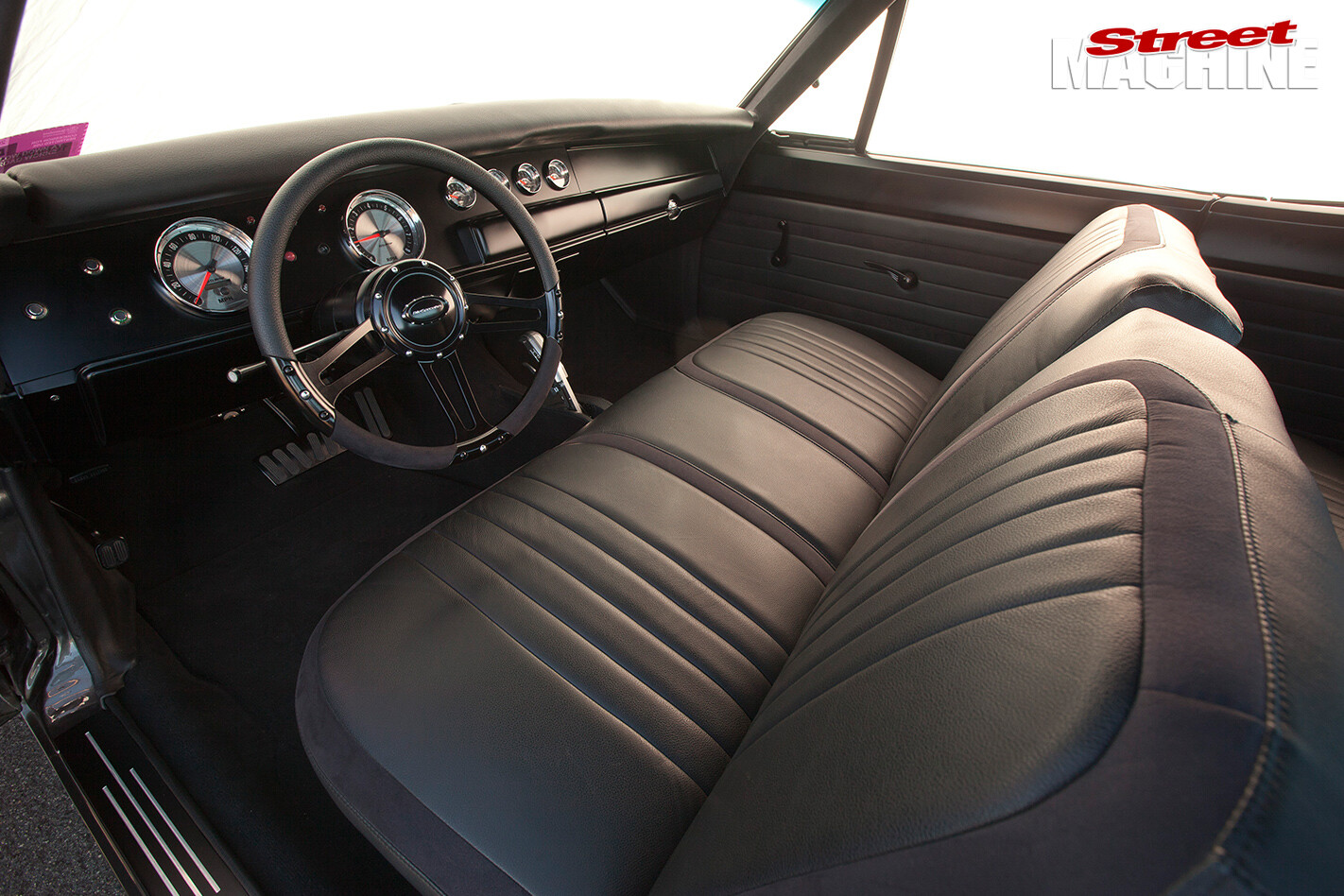 The factory front bucket-bench seat offers maximum cruising comfort during Sunday drives. A selection of Auto Meter gauges adorn the custom dash, while the Billet Specialties twirler and interior surfaces were refinished in a combination of black suede, leather and Mercedes-Benz carpet

There are monster stoppers front and rear: four-spot calipers clamping drilled and slotted discs – all from the Wilwood range – with a matching Wilwood master cylinder. Rims are cool ceramic-coated 20-inch Boyd Coddingtons with matte-black centres.

Given that the Satellite shares a bodyshell with the legendary Plymouth Superbird, big cubes are a damn-near legal requirement, and let’s face it, a small-block would look totally underwhelming in the generous B-body engine bay. Zane called on Robby at Abbott Engines to screw together 500 cubes worth of Chrysler Wedge donk, based around a tall-deck RB 440 block.

Capacity has been improved with a Scat forged stroker crank and rods, while a JE forged piston and ring set provides optimum compression for 98 octane pump gas. The fuel-air mix is controlled by a custom Howards roller camshaft via ported Indy cylinder heads, topped with an Indy single-plane manifold and a 1050 Holley Ultra Dominator carb. The 500-cube Chrysler Wedge motor was assembled by Robbie at Abbott Engines. With new pipes currently in the build, the boys are hoping for 725hp. The flat firewall and sheet-metal engine bay are as neatly finished as the exterior, and match the detailing of the engine and its ancillaries

Capably supporting the 700+hp donk is a Coan 727 automatic transmission, 4000rpm stall converter, transbrake and reverse-pattern valvebody. A three-inch tailshaft and sheet-metal nine-inch round out the drivetrain, the latter packed with 4.1 gears, 35-spline axles, billet yoke and Strange hemisphere.

Living and breathing Mercedes-Benz by day has undoubtedly influenced Zane’s ideas for the Plymouth, especially the interior. He commissioned Brendan at Gadenne Motor Trimming to stitch together a

combination of black leather and suede that adds a luxurious element to the otherwise hardcore Mopar, complemented by a custom dash housing a brace of Auto Meter American Muscle gauges and a Euro-style push-button start assembly. 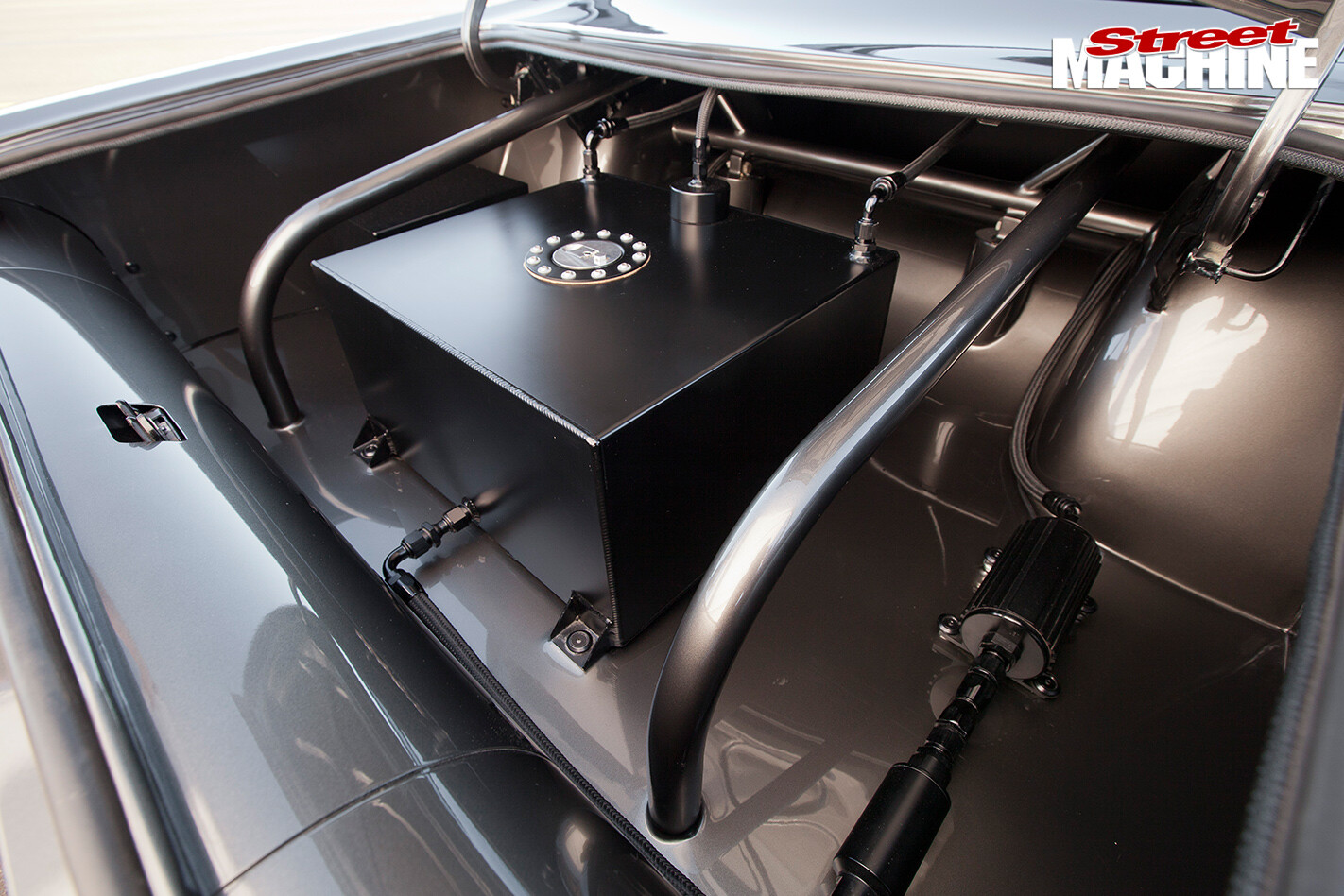 While some would expect the boot to be trimmed in leather, Zane chose to highlight the custom metalwork in matching grey paint, with any additional hardware kept in view and painted satin black

The Plymouth wowed the crowds when it was unveiled at the 2014 Brisbane Hot Rod show, scoring the coveted People’s Choice gong and third-place honours for Coupe Of The Show. At this year’s Mopar Sunday, Zane’s Satellite was awarded Top Show Car – Modified, and the honour of a victory parade to boot.