WHEN an engine family proves as popular with performance addicts as the LS series, someone is bound to push the limits. GM itself did so admirably with the tall-deck version of the LSX, with its extremely heavy iron construction.

American company Racing Head Services (RHS) built on that by introducing the aluminium LS-compatible block shown here. Like the GM block, it’s designed to serve as a core for achieving displacements of around 500ci (8.2 litres) relatively easily. Such massive displacement in small-block form certainly pushes the limit – or does it? WE’RE pleased to report that local company LSX Race Engines Australia ( a division of GM Motorsport) has been working to find out exactly how big the RHS LS block can go. The current answer is 527ci (8.64L), which is the largest displacement achieved for this block anywhere in the world.

19
The crankshaft is the backbone of any engine and at this displacement it has to be strong and as light as possible. Still, it needs a lot of heavy metal to keep the reciprocating package balanced, even with its generous weight reduction holes. Effectively, as much weight as possible is taken out of one side of each throw and added to the other

Getting it that far has taken a great deal of experimentation and customisation, according to company owner and well-known racer, Phonsy Mullan. This alcohol-fuelled engine, suited to either boat or drag strip, is currently turning out 1000hp, with a maximum torque figure of 868lb-ft@5750rpm, so it was worth the trouble. Phonsy gave us some of the details about how it was done.

19
Bare, an LSX weighs in at 102kg. In comparison, a bare Holden 308ci block weighs about 68kg, while the RHS LS is just 54kg. Note how heavily the front of the block has been modified to take the magneto drive developed by LSX Race Engines

The RHS LS block is designed to have bores of 4.165 inches and to accommodate a stroke of 4.600 inches. This gives a displacement of 501ci; just over the line. Opening the bores out to 4.200 inches only adds a shade less than half a millimetre to each side of the cylinder, so it’s a relatively easy thing to do and lifts displacement to 510ci.

19
You can see the big slugs of Mallory metal needed to keep this huge-cube engine balanced. And there’s that pesky reluctor

This is why there are quite a few tall-deck LSX and RHS LS engines around with displacements close to that, particularly in America. On the other hand, Phonsy explains that stretching the stroke to the 4.750 inches they’ve achieved is very difficult. This is because the crank counterweights tend to hit the undersides of the pistons at BDC. It’s particularly difficult at the rear of the motor because of the toothed reluctor disc.

“We must have had the crank in and out of that first engine 20 times trying new piston designs and checking clearances,” he says.

19
The bearings are Australian but the coatings are American. Like Obama says, the best of friends

Another issue with such long-stroke motors is that the pistons extend a fair way out of the lower ends of the bores at BDC. This reduces support as each piston rocks over and bears against the opposite side of the cylinder at BDC before rising in the bore. The reduced support shows up as increased wear. This calls for more diligent maintenance, but that’s the price for pushing the envelope. Most people who order an $80,000 engine like this understand that.

19
The tall (9.700in) blocks can be ordered with extra-long liners for long strokes. Even so, in extreme applications like this the piston does extend a little more than normal. If the liner looks thin that’s because the 4.200in bore takes it to the limit

FRICTION is a concern in any engine, but when things are at the absolute limit, as they are here, it’s even more important that it be reduced. Most of the main components in this engine have coatings or other surface treatments to help achieve this. Gudgeon pins in particular have a hard time in a long-stroke, high-pressure engine like this. These ones have a diamond-like coating (DLC) applied that helps reduce scuffing. Diamonds are made of carbon, and DLC is close-packed nodules of carbon so microscopically small that they appear to have a mirror finish. The pistons themselves have ceramic coatings that help them stand up to the rigours of operation in an engine like this.

19
This is the steel-rodded version of the 527. Oliver Ultra 6.350in LS1 rods were chosen to stand up to the strong demands of this massive-cube engine. The pistons are JE

If the crankshaft looks polished, it’s because it’s been given an isotropic finish by American company REM Surface Engineering. An isotropic finish has a non-directional texture when examined microscopically. The surface texture is so small that it looks like a mirror finish. It’s achieved by vibratory honing with ceramic pellets of various shapes and sizes, but that’s only half of the story. The chemicals used in the process are just as important. The ISF Process, as the company calls it, provides an increased bearing ratio because of greatly reduced surface asperities and increased lubricant retention. Plus it just makes for a very pretty crank. Callies or Bryant are the crankshafts of choice at LSX Race Engines.

19
You can see how close the rods and bolts come to the bottom of the cylinder liner. LSX Race Engines had to specify specially shaped rods to clear the liners

The bearings in these engines are also coated. The basic units are made locally at ACL, and Phonsy says they’ve found them to be the most consistent types. American company Calico Coatings imports them and applies its CT-1 dry-film lubricant. This is sprayed on to form a layer only about 0.000275in thick. Despite the minuscule coating, it reduces friction and can provide intermittent dry lubrication. “Pulling down an engine fitted with these bearings is amazing; they show hardly any wear,” Phonsy says.

LSX RACE Engines uses steel and titanium rods for these engines. The exotic high-strength steels used in top-quality rods are stronger than titanium, so steel rods can be a bit smaller than the titanium equivalents. That’s important in an engine like this, where internal clearances are so tight due to the extreme stroke. A larger titanium rod means the block has to have just a bit more relief cut into it at the bottom of the bores where the rod shoulders and bolt heads sweep past. Again, this reduces piston support at BDC.

19
Six bolts around each chamber keep things sealed up tight. Valve-to-piston clearances are about as tight as things get, though Phonsy won’t say exactly what they are

Titanium doesn’t slide well against steel, or against itself for that matter. It has to have a special chromium nitride coating or some other type to even work in an engine. Given that a set of titanium rods costs $8000, you have to ask why you’d use them at all. However, the answer is simple: titanium is about half the weight of steel.

19
Chamber volumes are tight and combine with the 4.750in stroke to create a high, but very secret, compression ratio. Diesel, you might say

Phonsy says that one of the two in-house 527 engines is fitted with titanium rods and the other with steel rods. “There’s a definite difference in how they spin up; the engine with the lighter rods does so much faster,” he says.

19
Offset pushrods are needed to clear the inlet ports. This calls for lifters offset 0.200in at the top

WE COULDN’T photograph the deck of the engine because there was a bit going on there that we weren’t allowed to show. Not surprisingly, it’s the same story with the cam. All Phonsy is willing to say is that it has about an inch of lift on the inlets and that the exhausts are different. Any information about lobe separation was too sensitive, although he did concede that inlet duration is approximately 280˚ at 0.050in. The secrecy isn’t surprising, as this engine is pushing things further than any other LS build we know of.

The heads are from Mast Motorsports and flow 458cfm. As you can see, the holes are pretty big; inlet port volume is 355cc. The Mast model designation for these heads is Mozez and they feature raised runner inlet ports. From the factory, the titanium inlet valves are set at 10˚ with a 4.0˚ cant and measure 2.250 inches across the chamber face. The Inconel exhausts are 1.600 inches across and have a 7.0˚ angle and 2.5˚ cant. 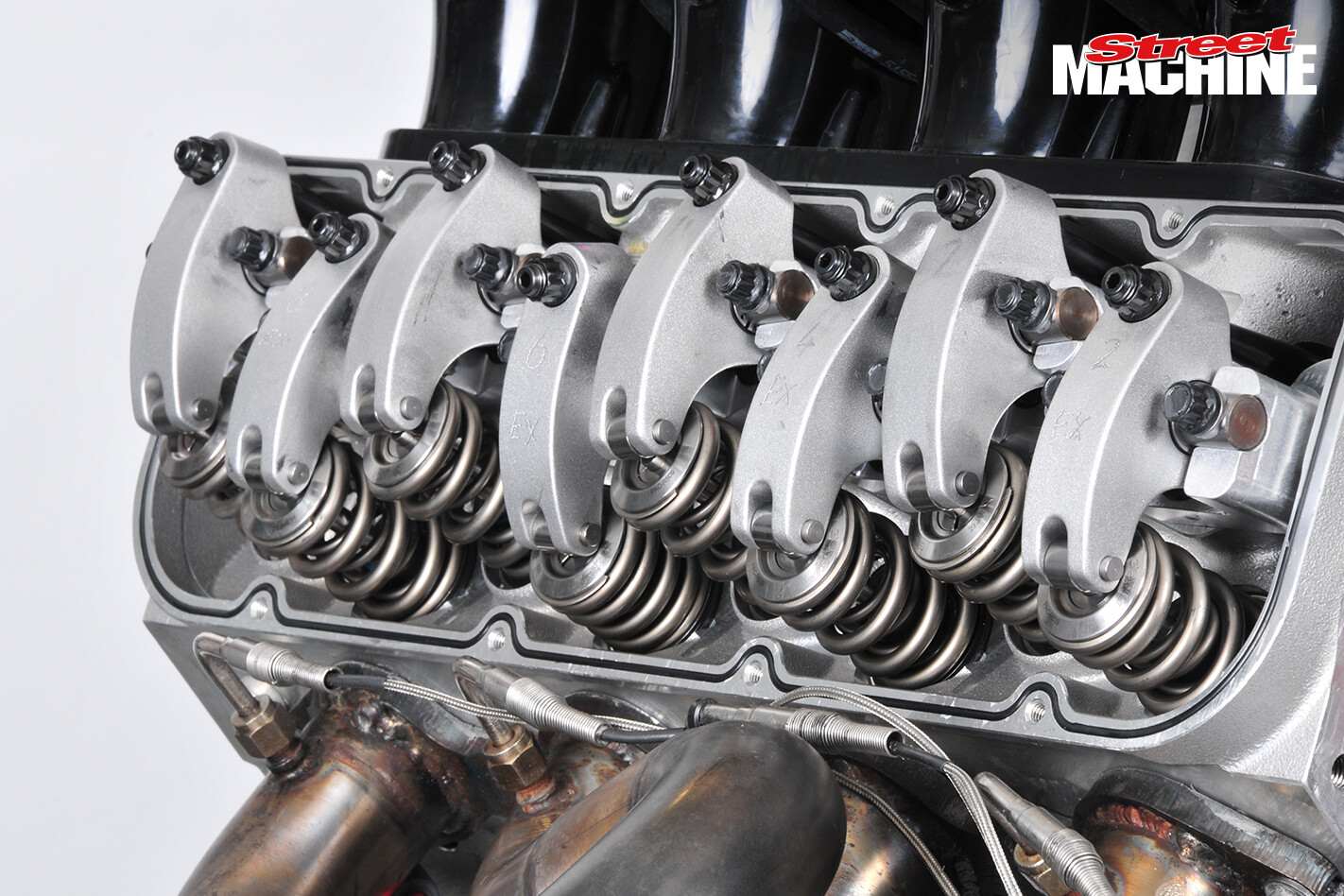 Jesel solid-body Pro Series rockers transfer the lobe lifts to the valves. Monitoring exhaust temperatures is the best way of determining how an alcohol-injected engine is performing

The inlet tract is, of course, more than just heads and valves. The manifold is part of the package and should be tested with it. LSX Race Engines had the heads on the flow-bench in the traditional way, with plasticine surrounding the ports to ease flow into them, and also with the trumpets attached. Each port flowed about 4cfm more with the trumpets attached, which is expected, but it also shows that the plasticine method isn’t too far off the mark.

19
The manifolds are CNC-machined out of solid blocks of aluminium, as investing in patterns wouldn’t have been economical for the small number they need cast

They also checked the throttle opening and found that from 100 per cent open down to about 95 per cent, there wasn’t much degradation, but under that, flow dropped considerably. They also tried three trumpet lengths. The ones pictured here are six-inch units and proved better than the 5.5-inch and five-inch types tested, but it should be born in mind that we’re only talking about 2cfm across all of them.

Still, it’s not surprising that a longer runner might work slightly better given the torque figures and the low revs at maximum power compared with smaller displacement engines trying to make big power. They turn it to 7000rpm, which is quite high given the stroke and cam specifications. Really high revs, say 8000rpm and over, are out of the question.

19
The Dailey Engineering dry-sump oiling system is a work of art. For the most part the pan is carved out of a single billet, but it has a second plate that seals the fluid paths, a bit like a transmission valvebody

Getting the package to this stage has been a pretty intense but enjoyable effort. Now that it’s sorted and running perfectly, Phonsy is enjoying the fruits of his and his crew’s labour. It takes about 120 hours to build one of these, including machining. Although the first was a monumental effort, now that they have a few under their belt it’s much easier.

If you want one, we’d suggest you order fast. The queue for these is only going to get longer.

19
When you need a really strong spark, a competition magneto is the way to go. But mounting it can be difficult. LSX Race Engines has developed a kit with everything you need to fit it to the front of a block machined to take it