AL JAMES is no stranger to driving very cool and very fast Plymouths. He campaigned the legendary ‘Ramcharger’, a genuine lightweight ’63 Belvedere super stocker that his father had also raced back in the early-70s. So you could say Al was hooked on Mopars from a very early age.

“When I was six years old my dad had a brand-new Vitamin C E38 six-pack R/T Charger big tank,” Al says. “I think Mum forced the sale of the R/T after she was rushed to hospital in it at 140mph while trying not to give birth to my younger sister!” The Charger was sold to Ian Diffen and it went on to become a wild mid-engined Sports Sedan.

It’s fair to say the James family have a fair bit of West Aussie racing history running through their veins, and Al is passing it on to the next generation. “I’ve had a few Chryslers in my time and have now passed on the love of them to my sons Aaron and Corey. Aaron has the light blue VG Valiant sedan that we as a father-and-son team have fitted with a big-block. He’s having a ball with it and has even dropped it into the nine-second zone, naturally aspirated on a radial. We are planning on doing Drag Challenge soon with that car, so you’ll see it out there.”

Simply one of the best-looking muscle cars ever made. Al is only running a 255 under the rear for the street, switching to 275 M/T Radial Pros at the track

It’s probably about time we get to the matter at hand, the gorgeous ’71 Plymouth Barracuda on the page in front of you. With the oil crisis looming and insurance companies getting nervous, 1971 was the last year that big-blocks were offered in the E-body cars, but don’t worry, Al’s Barracuda makes up for it with 547 cubes of bored and stroked Chrysler big-block goodness.

It’s a 440 block that been half-filled with grout, there’s a 4.5-inch Scat crank, steel caps and ARP bolts, 7.1-inch Eagle rods and a set of 11:1 CP pistons. The cam is from Reed and is a solid flat-tappet deal with around 750thou of lift, and it gets fully utilised thanks to the maxed-out porting job on the Indy heads by Simon Lazarevski from Hippo Race Engineering; the heads have been flowed at 368cfm. The other side of the equation is equally as impressive, with a custom set of extractors with two-inch primaries snaking their way around the obstacles into a set of four-inch collectors. “They were done by Extreme Custom Engineering and are a work of art,” Al says.

Al has four different bonnets and five different sets of wheels for the car, so he can mix it up a bit. “No good having a girlfriend that only has one dress and one pair of shoes!” he laughs

For the photoshoot, Al fitted the Indy tunnel-ram topped with twin 950 carbs from Texas Race Engines, but he’s also got an Indy single-plane and an AED 1050 Dominator carb that fits under a stock shaker scoop.

Al fabricated the boxy scoop out of clear Perspex, but then a carby backfire made a mess of that idea, so it copped a coat of black paint

If one big-block is good, then surely two is better. Al has another big-block for the car, a 528-cuber that originally powered the super stocker, so I guess it’s got 1075 cubes all up. “Having a complete, ready-to-go short motor sitting there is a good feeling and I have had to swap them out a few times,” Al says. “It’s nothing new, just old proven-recipe stuff that’s around the 750hp mark. People were doing this stuff 20 years ago.”

That kind of power gets the Barracuda down the track with a best so far of 10.1@136mph, but that elusive nine-second pass probably won’t ever happen, though not because the car couldn’t do it: “One goal that got away was to get the nine-second, full-street, naturally aspirated pass to its name,” Al says. “I have managed a 10.1@136mph, but have now been stopped by ANDRA at Alice Springs Inland Dragway at Red CentreNATS and then three weeks later drove up to the Motorplex for a Wednesday night hit but was stopped again. Rules is rules, I guess, but I don’t really want a ’cage in it. Might be a good excuse to buy another car!”

The 440 has been stroked with a 4.5in crank – up from 3.75 – and with a bit of an overbore now measures up at 547ci, and is also half-filled with grout. Al swaps between an Indy single-plane with 1050 Dominator and the tunnel-ram with twin 950s. “Our big-block Chryslers are built by us at home,” he says. “I only get help from Ricky Wood installing and degreeing camshafts; I haven’t quite got my head around that yet!”

While Al has spent a lot of time developing the car and making it go quicker – it was running 10.80s when he first got it – he can’t take credit for the build; that has to go to Geoff Ryan from Brisbane. He built the car almost 18 years ago, but decided to sell it because he didn’t really like the attention it attracted – not from the authorities, mostly the people always wanting to stop and have a chat! The fact it still looks so good is testament to the quality of that initial build.

Al couldn’t be sure of the quality though, as he bought it sight-unseen, although he did make plenty of phone calls: “I was on a mine-site camp about nine years ago reading a Just Cars magazine and came across a ’71 Barracuda for sale in Queensland. I was dreaming and gave the idea of buying it a miss, but a few months rolled by and there it was again still on the market. The car was already a bit of an animal and Geoff had some comfort in selling it to me as I was not a total beginner and already had a few years of drag racing and Mopar big-block knowledge under my belt. The body of the car is a ripper and just a good solid thing. I fitted Dynamat to it when doing the new carpet, and the floors are as-new. The paint was done by Brent Petrie in Queensland and is showing a few battle scars, but it’s still awesome and way too good to repaint.”

If you’re wondering about the colour, it’s not one of the factory options; it’s a custom-mix orange conjured up by Geoff, and the recipe was never written down. Al says that Geoff admits there may have been some beers involved when the car was painted, but thanks to modern technology you can match most colours these days. For the Mopar geeks out there, the car was originally Tor-Red – or Hemi Orange if you’re a Dodge fan – and if you look closely in the engine bay you can see the original tags were never painted over.

Apart from a few Auto Meter gauges, it’s pretty stock in the cabin, although a pistol-grip handle has been fitted to the factory ‘Slap Stik’ shifter

“Having a shared interest and love for cars with my sons is so good,” Al says. “From doing huge trips across the country for Red CentreNATS to just cruising to the local pub for a counter meal, I love having them around. We are not mechanics; my sons and I are boilermakers/fabricators, but after playing with 440s for so long, we seem to be doing okay.” 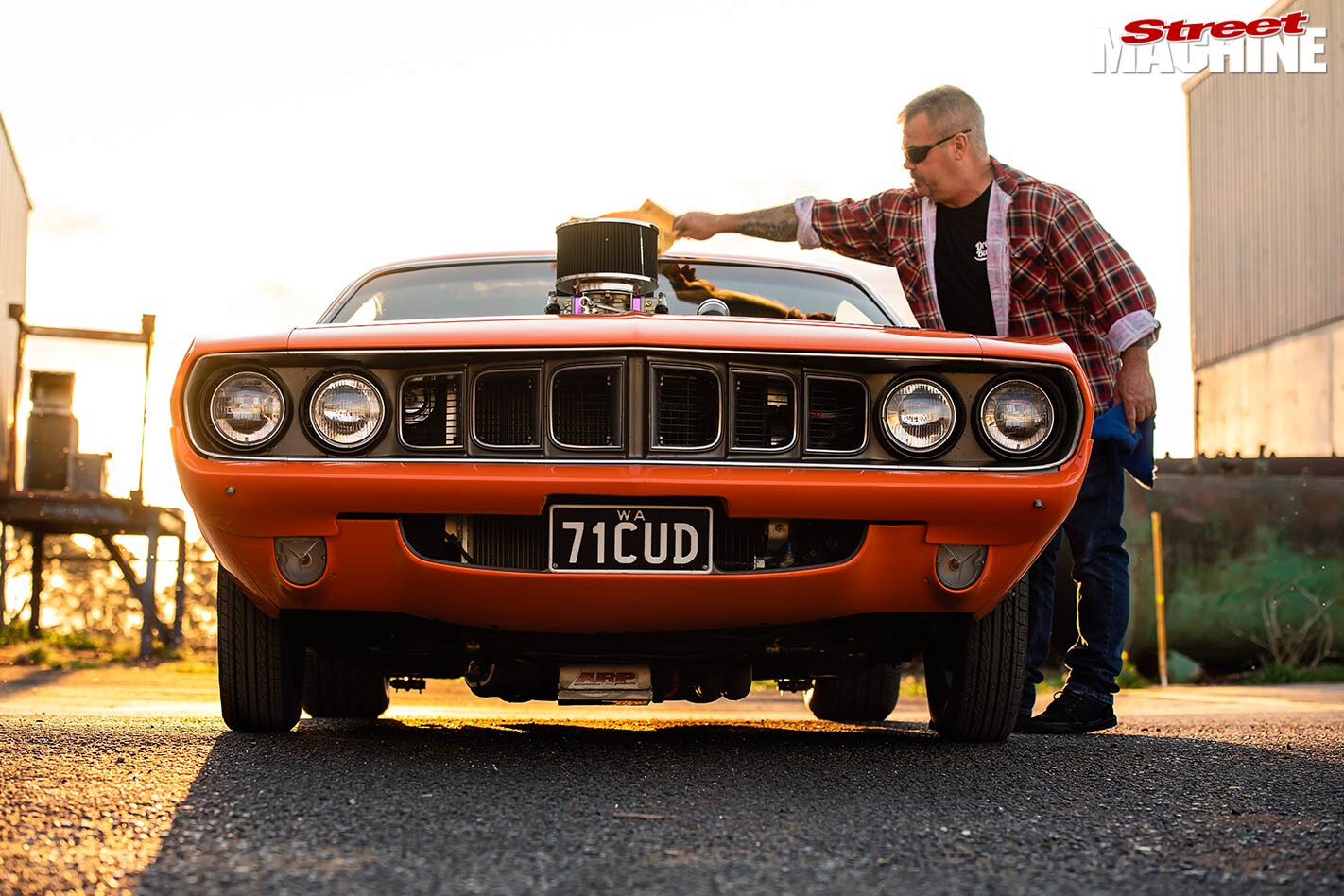