A firebird can rise from the ashes in the right hands.

This article was originally published in the January 2017 issue of Street Machine.

Mark Sullivan has had more cars in Street Machine than many have had hot breakfasts, including a ’69 Firebird, an insane ’65 Mustang fastback, and the 1BADHK Monaro, which has not only popped up a couple of times, but bagged SMOTY back in 2007. 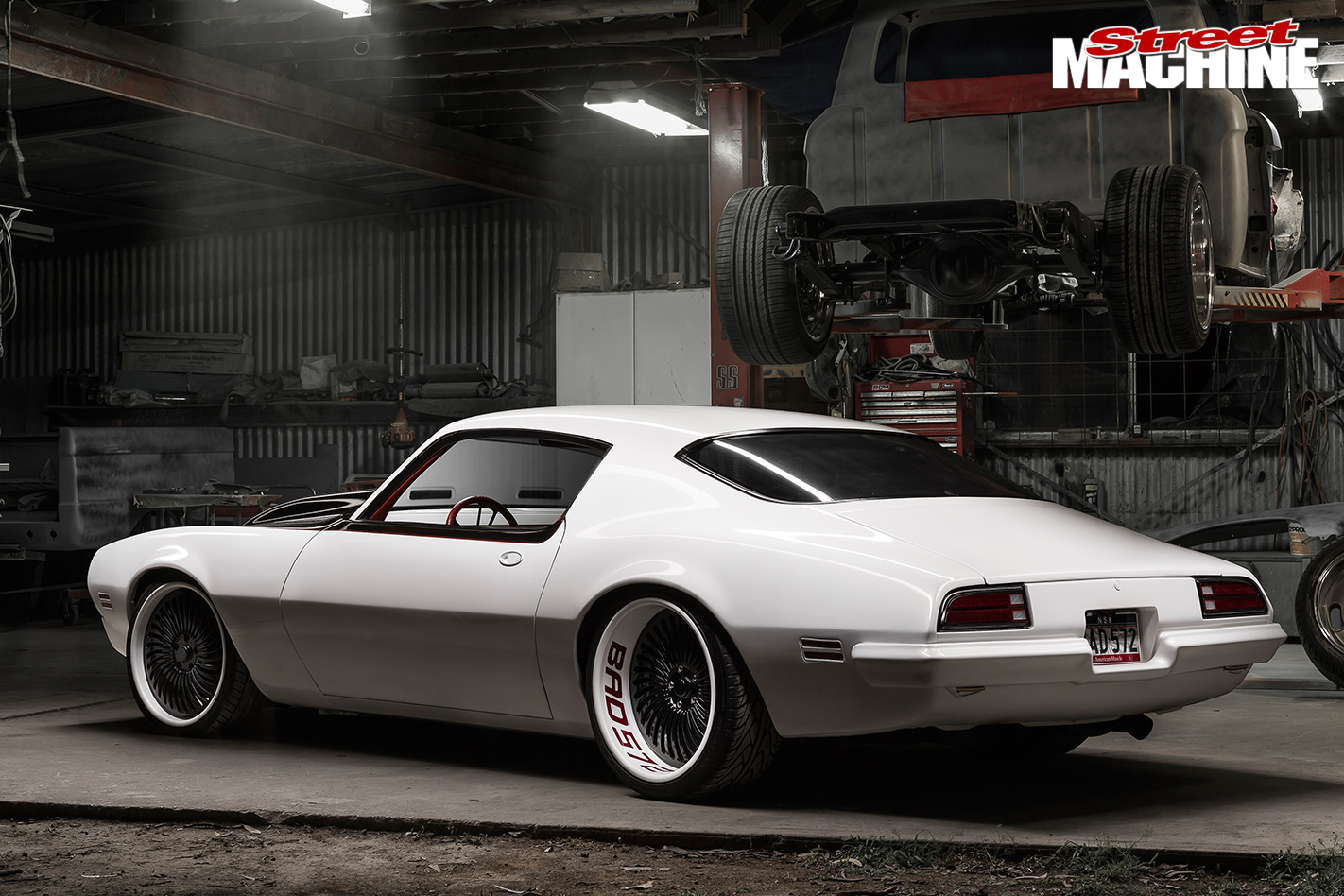 So what does a guy build who has built it all before? A malaise-era, F-body ’72 Firebird with a fat ’n’ lazy 572 big-block, of course! For those unfamiliar with the term, ‘malaise era’ refers to the US car industry from the early 70s until the early 80s, when the oil crisis, increased emissions restrictions and changing consumer tastes all conspired to effectively end the muscle-car era, transforming formerly hairy-chested high-performance icons into sluggish, limp-wristed shadows of their former selves. Pontiac’s 1972 Firebird, for example, had to comply with lower maximum horsepower standards (although the full-fat 455ci V8 found under the hood of the Trans Am version was still good for a respectable 300hp). 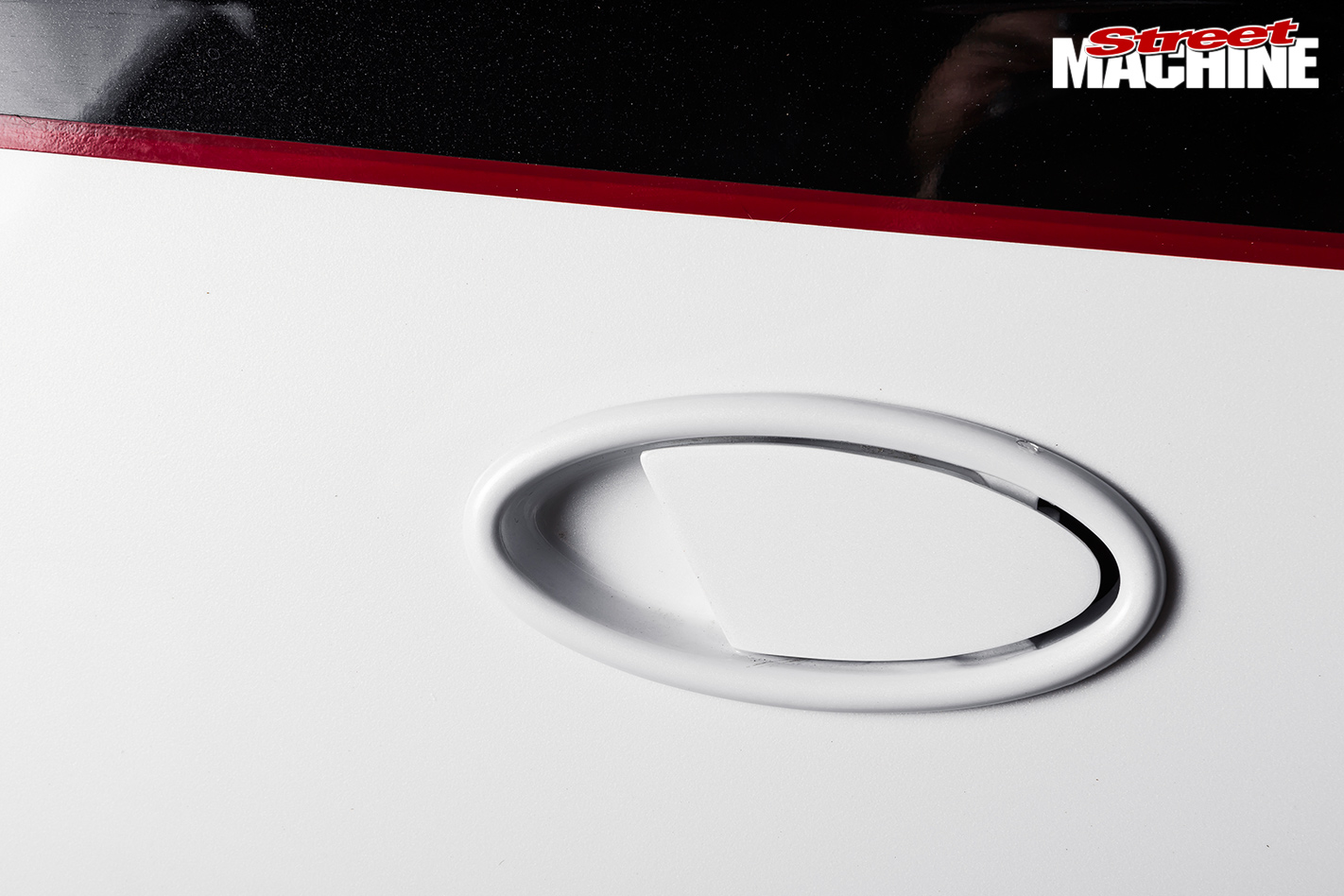 Mark prefers the shaved look on his doors, but these Billet Specialties interior door handles are stealth enough while keeping things legal. “I just made ’em work as an exterior handle,” Mark explains. “Just a little bit of welding; not too hard!” For a bricklayer by trade, he’s a great fabricator!

It’s definitely not your average street machine fodder, but as Mark explains:

“I wanted to do something totally out of the square.” He’s certainly done that, but it’s not like it was an easy meal.

“When I got it, it was full of rust and ran a boat-anchor Pontiac 350.” The stuffed donk, which struggled to generate 160hp thanks to smog pumps and bullshit, was plonked straight in the bin. “I didn’t even bother selling it,” Mark says.

While these days many are tempted by the easy power of the LS, Mark couldn’t bring himself to do it. “I get a bit sick of seeing them in old cars,” he says. “And I like carbies; I can tune them myself.” 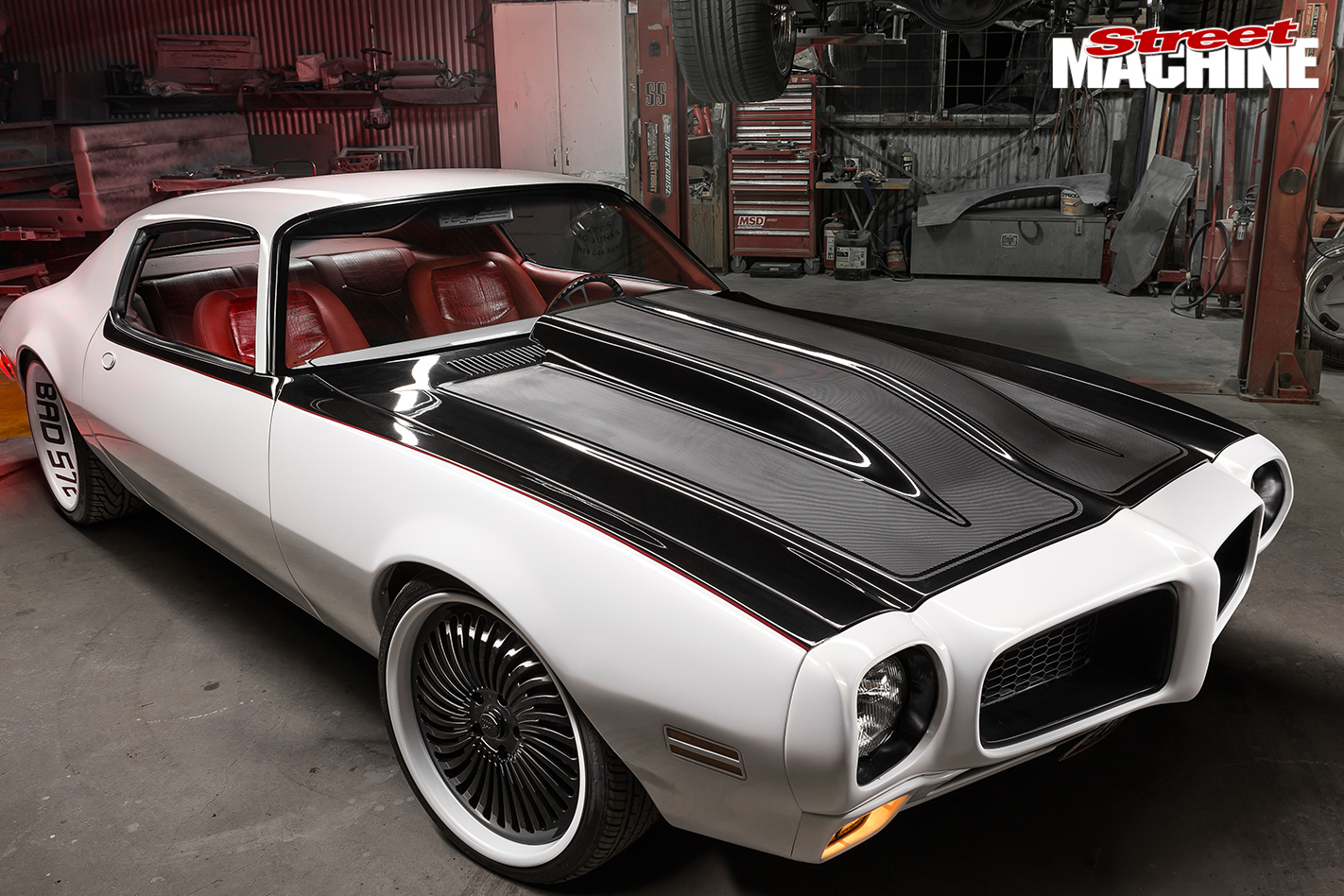 While love for the Trans Am is universal among Firebird enthusiasts, they only built 1286 of them for 1972. Mark’s F-body is one of 5250 Firebird Formulas built, which included the asthmatic 350 V8 coupled to a trick, dual-scoop fibreglass bonnet. Mark flicked the engine and the bonnet, replacing the latter with an all-steel item, into which he then integrated a fibreglass cowl scoop

Instead, a fresh 572ci big-block was ordered from Muscle Car Engines in New Jersey; a single 1050cfm Demon carby went on top and a bunch of billet accessories were fitted to hold up the ancillaries. Like the factory snotter, it’s under-stressed, but because it packs more cubes than the Oxo warehouse, a lazy 650hp on the bench was easily achievable. 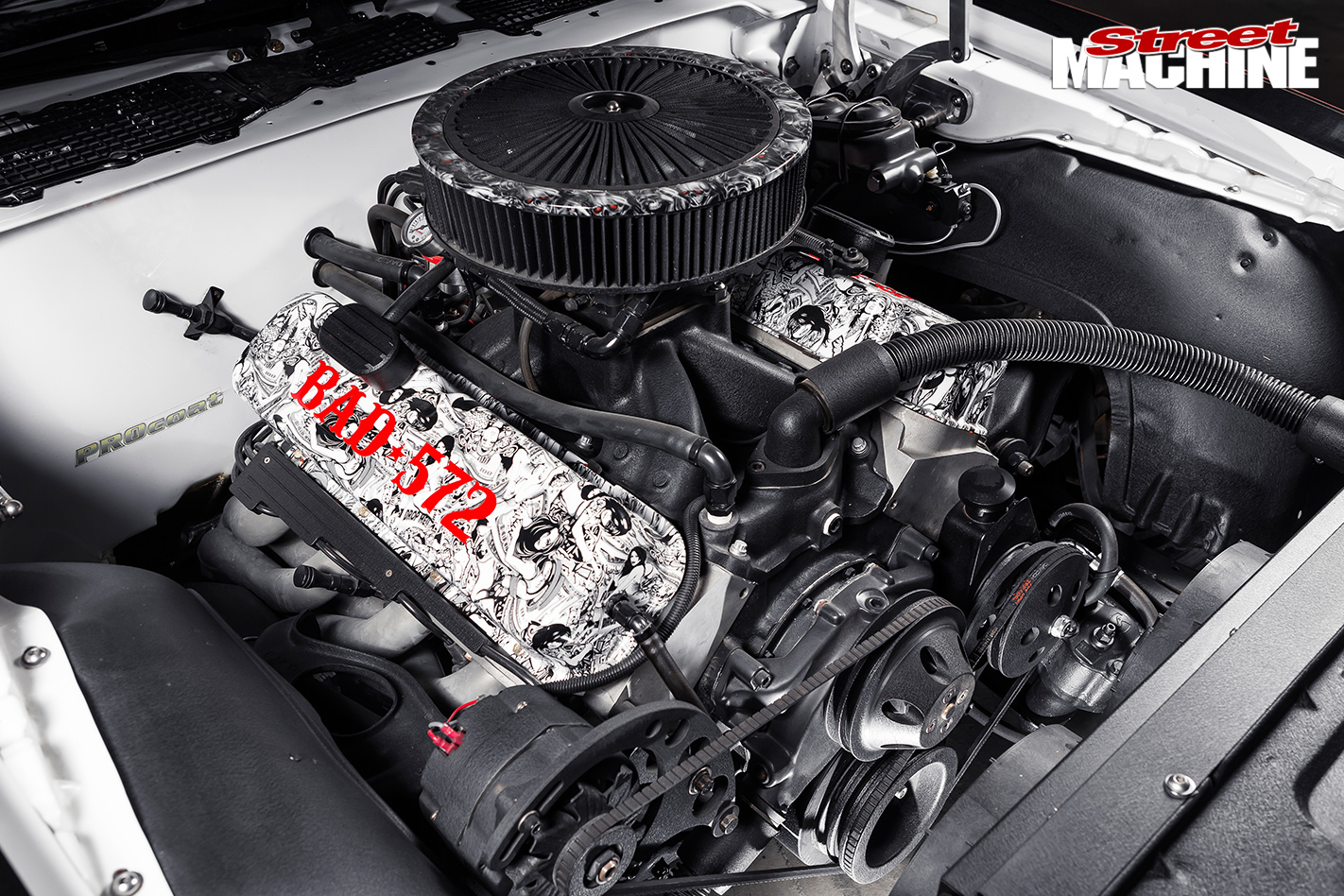 “These second-gen Firebirds are hard to get low; I’ve only put a 2.5-inch exhaust system on it because of that,” Mark says. “And it could do with more carbs, but I don’t race!”

As the Trans Am variant swallowed a big-block from standard, the stock Pontiac front-end was retained, with Mark treating it to a refresh; powdercoating found its way onto the suspension components, inner engine-bay skins and all the shiny billet bits. “I got told it would be a mistake, but it depends on if you want bling or stealth!” he laughs. 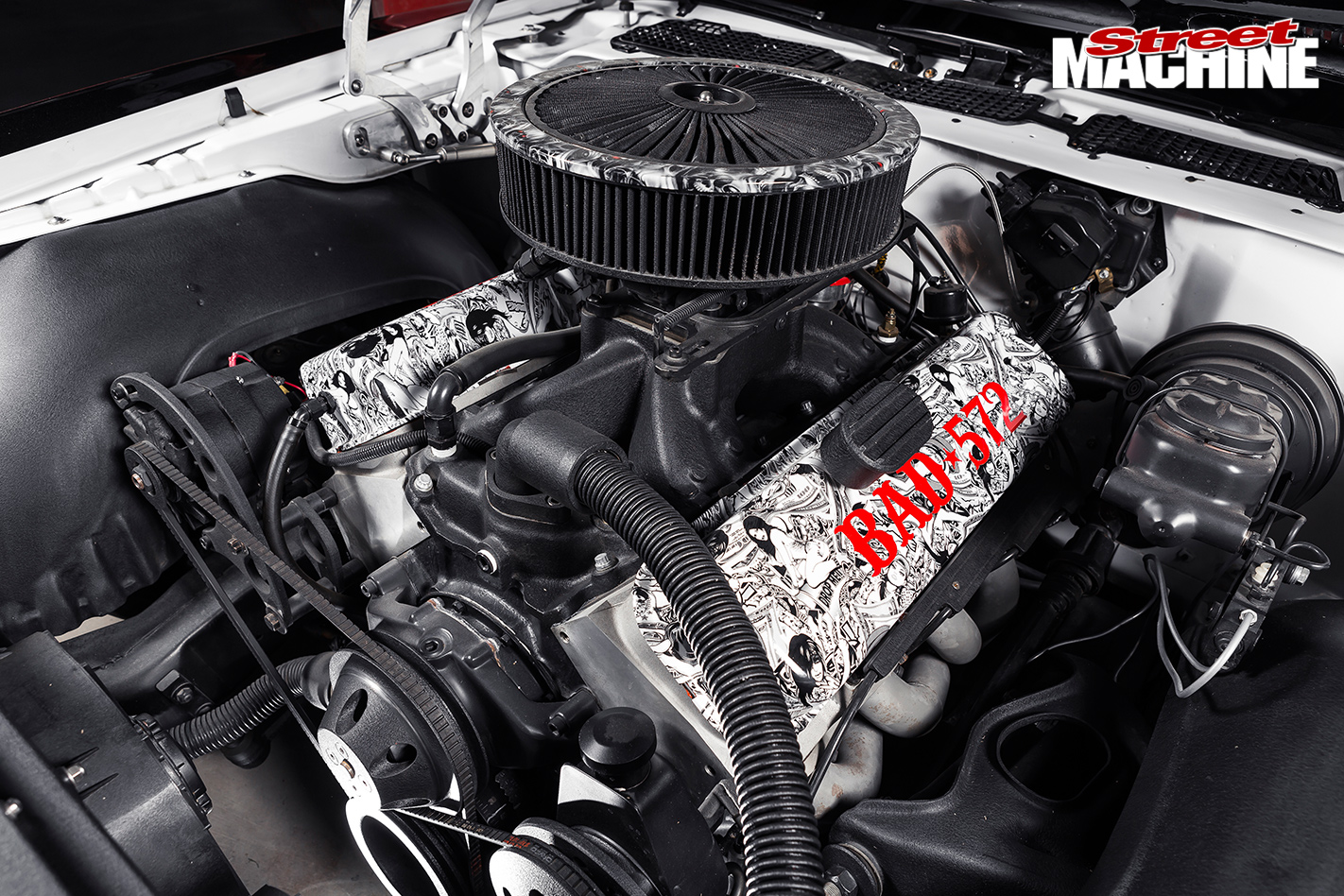 Besides, as owner of PROcoat on the Central Coast, powdercoating is kinda Mark’s thing. But if you’re gonna go stealth on a 572-cube, monster-wheeled Pontiac Firebird, you do need to offset it with some zesty details to pique the punters’ interest. Hence why the air filter is covered in evil skulls and the rocker covers feature US greenbacks and sexy ladies riding atom bombs; you see, PROcoat also offers water transfer printing, and the result is something else, giving some pop to one of the most understated big-block engine bays we’ve seen.

Although fitting a 572-cube Chev to the ’Bird was no drama, the car needed plenty of surgery at the other end. Mark replaced both rear quarters, the boot floor, tail-light section and the inner and outer scuttle panels. “The whole rear end was pretty rusty,” Mark says. “The drainage in these is poor, and once they’re blocked, water just runs all through the boot!”

While the rear end was chopped up, Mark installed a sneaky set of mini-tubs to accommodate a pair of deep 20x10 Intro Turbines. Even though second-gen F-bodies aren’t exactly common here in Oz, there are plenty over in the States and a good aftermarket network supports them. 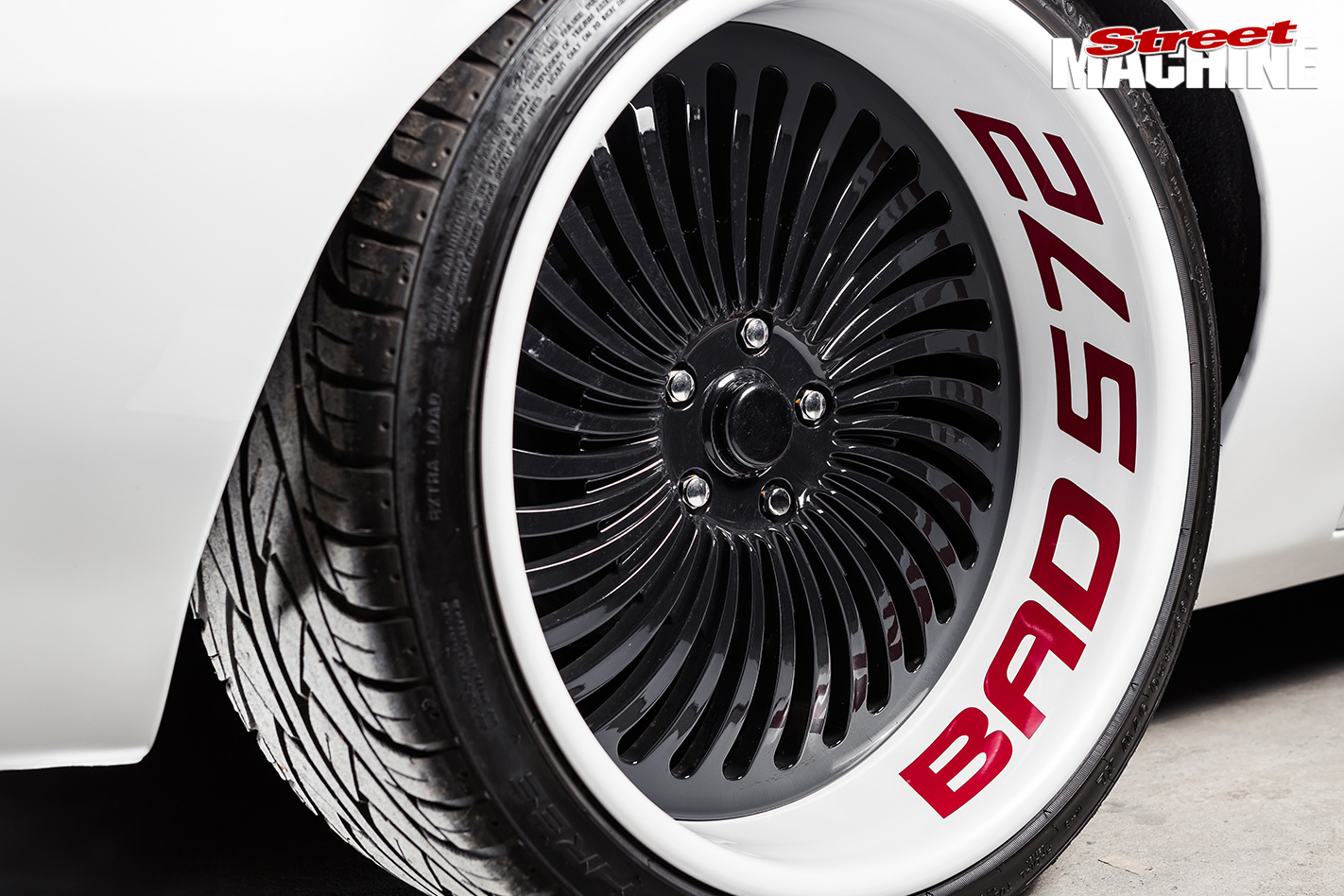 The Intro Turbine alloys, 20x8.5 on the front and a healthy 20x10 on the rear, are usually hewn from a solid piece of billet, but Mark got these custom-made as three-piece unites to facilitate the black-and-white powdercoating treatment. The BAD572 graphics are vinyl, “just in case I sell the car and the new owner doesn’t like ’em. Actually, I also did that in case I didn’t like ’em!”

“I bought some repro inner wheel housings complete with factory pressings, welded them in, then filled a two-inch gap between the inner and outer. You get too many problems with your rear-seat fitment if you go a full aftermarket tub,” Mark says of his now-hidden handiwork. “I also pumped the rear guards out about 15mm; you’d never notice though.”

Mark’s fabrication skills were also put to use creating a new dashboard; the standard item is typical Yank-spec, a cockpit-style affair with acres of padded vinyl and a bit of woodgrain to break it up. Completely smooth and symmetrical, the new dash reflects Mark’s stealth treatment, with just a set of classic-style Dolphin gauges centrally mounted to break it up.

The only part of the build Mark didn’t handle himself was the trim, with the Firebird being sent to Jeff’s Custom Interiors in Gosford for a full interior makeover. Mark provided just one criterion – it had to be red. 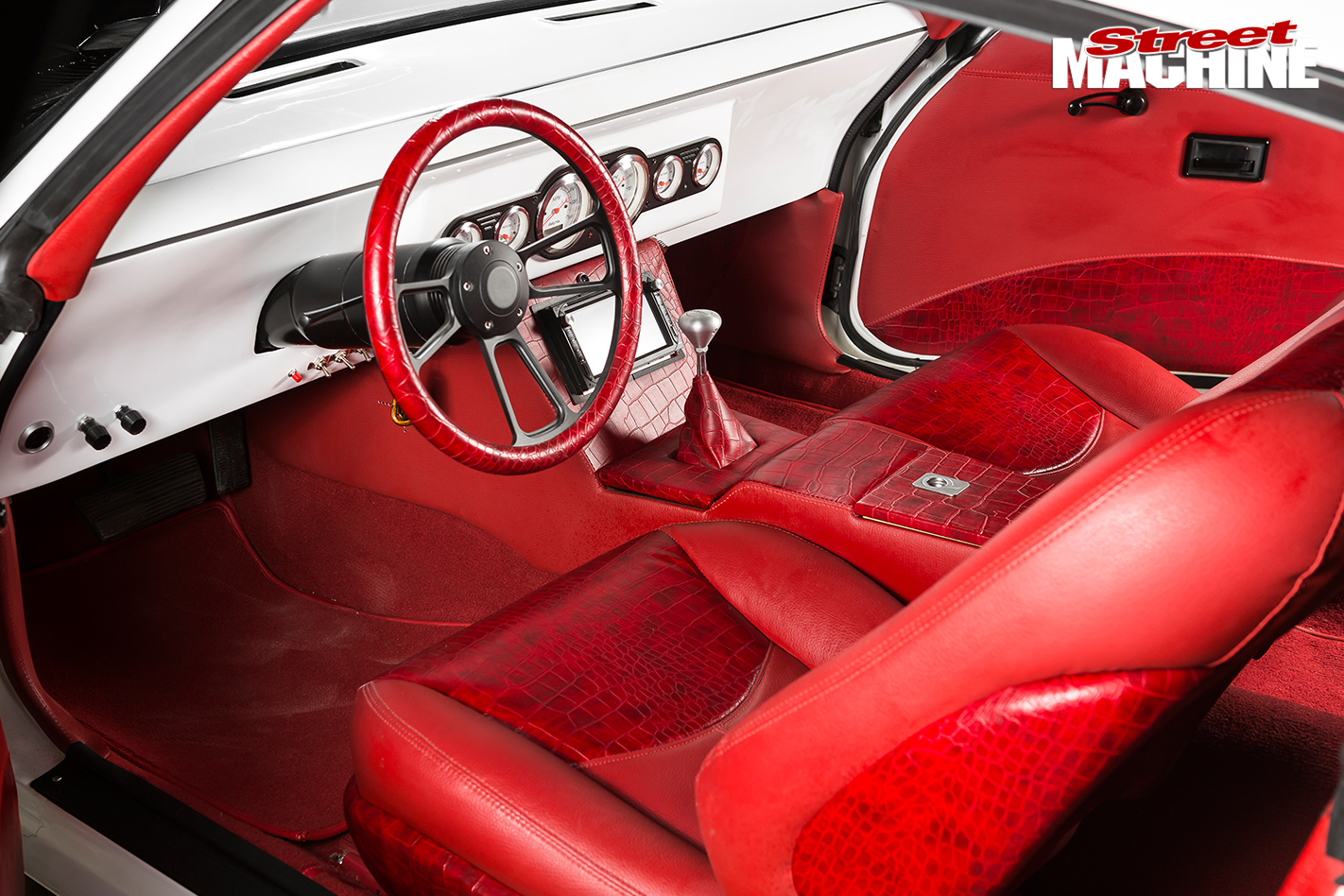 Naturally, Jeff came to the party, having cooked up a few custom interiors for Mark in the past. Starting with a pair of flip-forward Hyundai Coupe seats, he re-trimmed the pews in leather and crocodile-skin vinyl, as well as the custom centre console, lower door trims and Intro Billet steering wheel.

You may notice the Pioneer double-DIN stereo system, but Mark barely does. “It doesn’t get much use; the engine and exhaust are way too noisy!” he says with a chuckle.

Walking into Mark’s shed for the first time, it’s hard to imagine such a highly decorated procession of elite street machines emerging from the structure; like all good sheds, it’s just corrugated tin and dusty machinery until Mark starts working his magic. Like the TARDIS, it’s bigger on the inside than out. To the right there’s a hoist where Mark is building up a sacrilegious Chev-powered ’65 F100, while on the left there’s a makeshift spraybooth, the very place he laid the shimmering custom-mix PPG three-layer pearl onto his Firebird. 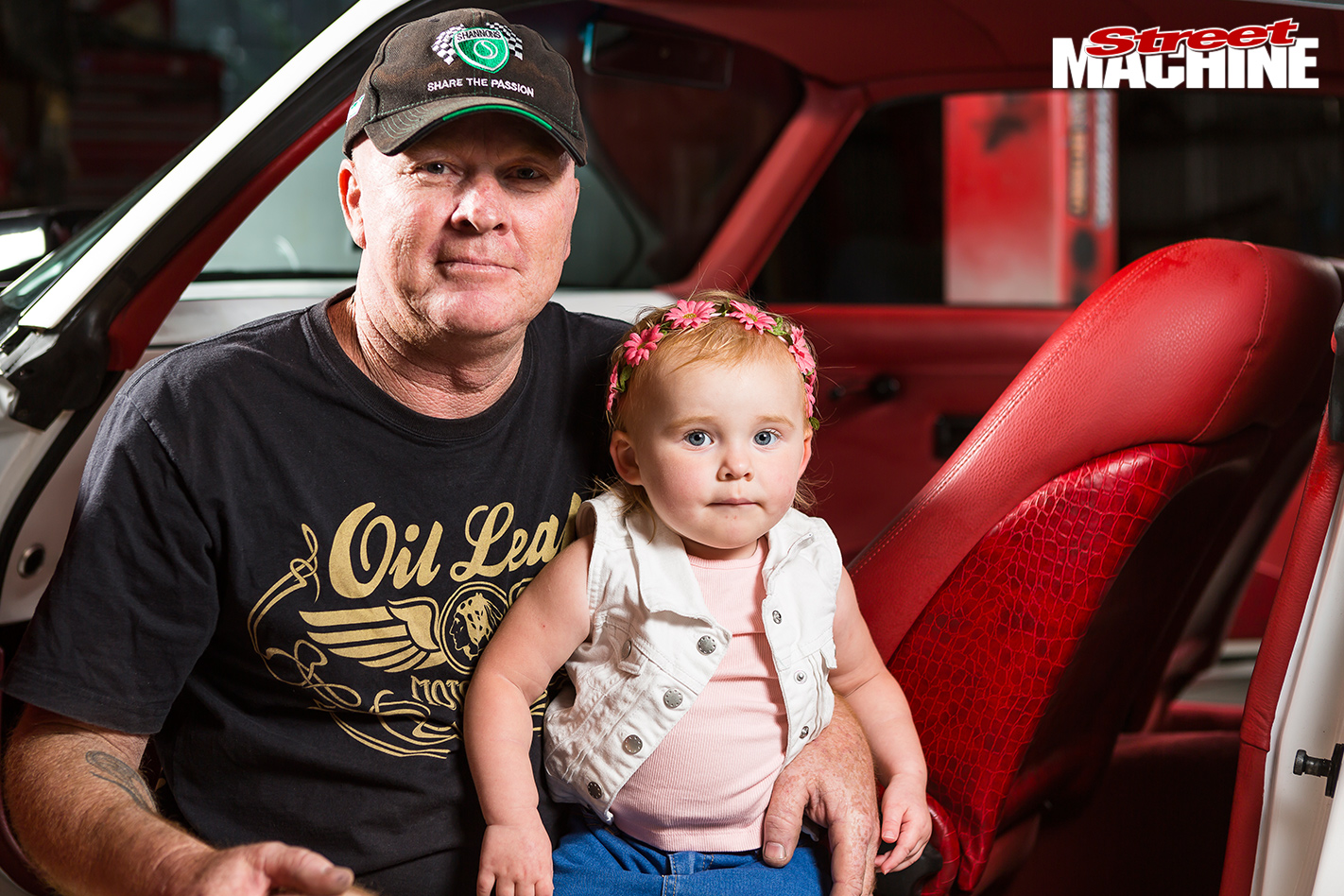 Mark and his granddaughter Skylar make a formidable car-building team. “When she comes down to the shed, she says: ‘Help? Help? Help?’ and wants to pick up something when I do. She’s already a car-head; she’s awesome!”

In fact, trimwork aside, Mark’s cars don’t leave the shed until they’re ready to rumble. “I do it all in the shed after work and on weekends,” he says humbly.

The Firebird is no different; it rolled into the shed a stuffed old malaise-era muscle car and rolled out 11 months later an elite streeter. And despite the flurry of activity, Mark wouldn’t have it any other way. “If I don’t get it done quick, I’ll lose interest and want to start something else!” 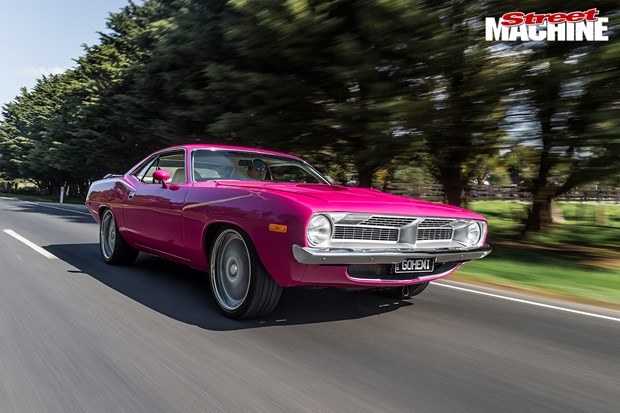 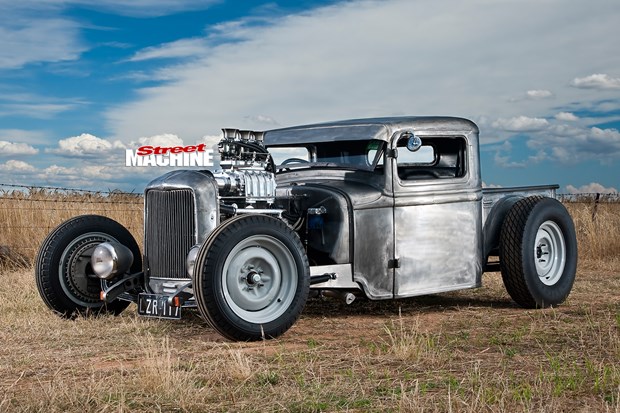 Nick Crocitti has a ripper first go at a hot rod with his blown, slammed and naked 34' closed cab pickup 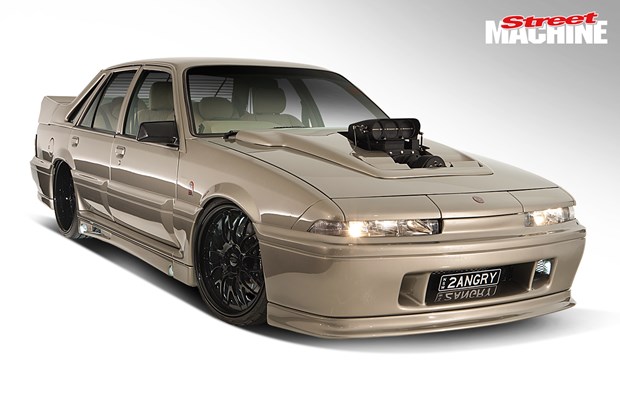